At the County Council meeting today (Wednesday December 13), Hamilton Township Mayor Mark Lovshin was elected as the new Warden since Mark Walas has completed his term. This is Mark Lovshin’s second term in this position. A major item for Mark and his council will be approval of the budget for 2018. There are two major differences between the County budget and the budget for the Town of Cobourg: 1) The budget is presented to Council before the start of the year instead of late January and 2) there was only one “open house” and that was to discuss budget processes with taxpayers (11 residents came to it). Budget details (numbers) were not discussed although they are made available online after the presentation – see link below. In addition, although the 37 page memo to Council contains good detailed budget overview numbers (see below), detailed line items are not provided – you have to look at the online documents. The target levy (tax) increase was 2% (plus an extra 0.3% for infrastructure) but the proposed budget is for 0.1% less than this.

I’m not an accountant but I like the way internal costs are allocated. Each internal department (e.g. HR, IT, Facilities etc) is charged to operating Departments based on their expected usage. For example, the cost of computers is not just the hardware and software but also the support by the IT department. This method is used in large corporations and helps give clarity to how money is used.

Cobourg’s budget in this council’s term is ready earlier than previously and in that respect it’s catching up to the County.  But the County only release their numbers after the presentation which focuses on the process and the end result of how much taxpayers will be hit with.  But let’s look at what they did report in today’s report.

Like the Town’s budget, there are two types of cost: Operational and Capital. 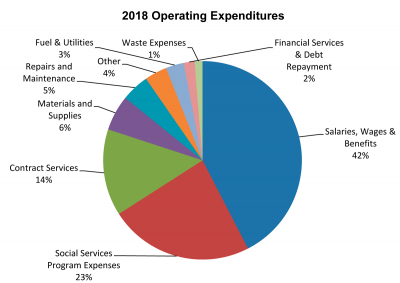 About 23% of it is spent on Social Services programs (that’s presumably not salaries but money given to people on welfare etc.)

Another 14% of their operating costs goes to external services which include all forms of contract services including waste collection, engineering, auditing, legal, repairs and maintenance and a number of other specialized services. External services also include annual fees to the Municipal Property Assessment Corporation (MPAC) and the Health Unit.

Materials and supplies account for 6% of operating expenditures and consist of medical supplies, raw food for the long term care home, sand and salt for roads, maintenance materials, office supplies and many other goods required for County operations.

The total planned capital expenditure for 2018 is $22.4M.   Long Term (2025), the two big projects are the re-build of the Golden Plough Lodge  and the new bridge in Campbellford. Meanwhile, the County Treasurer’s report says that most of the money for 2018 goes to Roads (43%) and Waste management (27%) and lists the key capital projects & purchases: 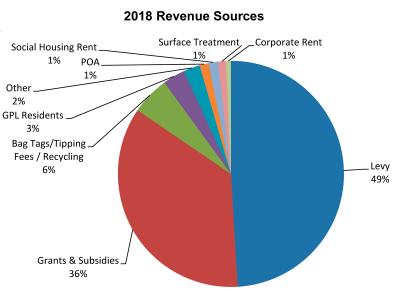 Grants and subsidies from Provincial and Federal governments contribute 36%.

Several departments generate significant revenue for their programs through rents, sale of recycled materials, accommodation fees for long term care, fees such as bag tags and tipping fees, and Provincial Offences fines. The relative proportion of revenue sources is consistent with previous years.

Download the complete County budget document here. It has more details but other than top line numbers, there are few dollar amounts provided.

The full budget (departmental overviews) and business plans for every department, as well as departmental budgets (line item budgets) and long-term plans – were made available on the county website immediately after the presentation.

These budget documents are now available for review by Council and the public for a period of six weeks until the next County Council meeting on January 24th, at which time Council will vote on the Budget.  That’s a month earlier than Cobourg although there is no public meeting where the public can observe the council’s review.

However, the increase of the County’s portion of the tax bill will average 2.2% and that’s not too bad although John Henderson has published a target of 1.4% for Cobourg’s increase.

[Note: This post has been modified from that originally posted to correct factual errors about availability of detailed budget numbers]

Will the Forest Hill area finally have some much needed and long overdue new paved roads?…..considering what we pay in property taxes, they are in dreadful need of attention! It’s time for money to be spent in this area!

I feel like the county would focus on broader issues. Honestly the condition of the roads in that area part and parcel of living in a rural subdivision.

Ask the Township not the County

Congratulations John, in shining some light and attention on the County financials.
It appears that Cobourg taxpayers pay a similar amount to the County as they do to the Town of Cobourg, but there seems to be relatively little interest and attention paid to how effectively those County $$ are spent.
I think that any future coverage you give to this subject would be of value to Cobourg citizens.