In October 2016, Citizens were very interested in providing input to the 2017 budget – not so much this year.  At this year’s event held this afternoon, there were only three submissions submitted in advance and two from the small audience – by the Cobourg Taxpayers association (CTA).  None asked for any significant funds.  Andrew Tutor (Chaplain) asked for a spruce up of the Old Bailey; the Cobourg and District Dog owners Group (CADDOG) asked for upgrades to the Dog Park; Ted Williams asked that a reserve fund be conducted for the Marina (and campground); and CTA President Lydia Smith wanted to highlight some budget trends.  None referenced the wish list submitted by staff on 12 October which was the main pre-occupation in 2016.

Andrew said that he has conducted a number of weddings in the Old Bailey and that “it has been looking quite tired”.  He asked that the carpet be replaced, that the green felt covering on desktops be replaced, that two lamp stands be tightened and that the rattle in an air-conditioning vent be fixed.  Andrew had no idea how much these would cost. Treasurer Ian Davey responded that these could likely be fixed with normal maintenance.

A detailed letter from Jan Rosamond, president of CADDOG, asked for an estimated $1800 for work in the dog park to reconfigure gates and add fencing to provide for a “quiet area” – essentially to separate large dogs from others.  She also asked for a Port-a-Potty to be provided without putting  a price on that.

In a letter to council, while acknowledging the support and funds provided to date, Winston Emery, Chair of the Bicycle Action Committee, asked that the amount currently budgeted annually for Active Transportation be increased from $15,000 to $25,000.  They also provided a prioritized list of potential infrastructure projects for Trails, Bike Lanes etc  Although no decisions were made in the meeting, Council seemed sympathetic.

Ted pointed out that as early as September 2015, Council agreed that the Marina might be short of funds over the long term and that a Marina Reserve Fund Study should be performed and it should also include the campground. Ted said that there was a similar requirement for a Reserve Fund Study for condos and one he was familiar with cost $4500.  Director Dean Hustwick replied that the Asset Management plan would cover this requirement and that this was currently under way.  This would include the Marina.  Ted also asked that because the Marina and campground are “entirely user pay” that their assets and reserve funds should be kept separate from each other.   He does not want boaters to pay for (e.g. paving) or taxpayers to pay for items used only by boaters.

Lydia did not ask for any budget allocation but wanted to point out what she saw as a trend when comparing 2013 to 2016 financial statements. She presented a hand drawn set of numbers with arrows to indicate changes.  Below are her numbers re-formatted a little.  She noted that the first 4 items represented 80% of the total budget

Lydia was especially concerned that one large department had a significantly bigger increase than would be expected over 3 years.  The argument that the population had increased so the budget would increase did not show such an increase in Protection salaries.

However, Mayor Gil Brocanier said that there were moves in responsibilities between departments and what counted was the overall budget which had risen 11% from 2013 to 2016 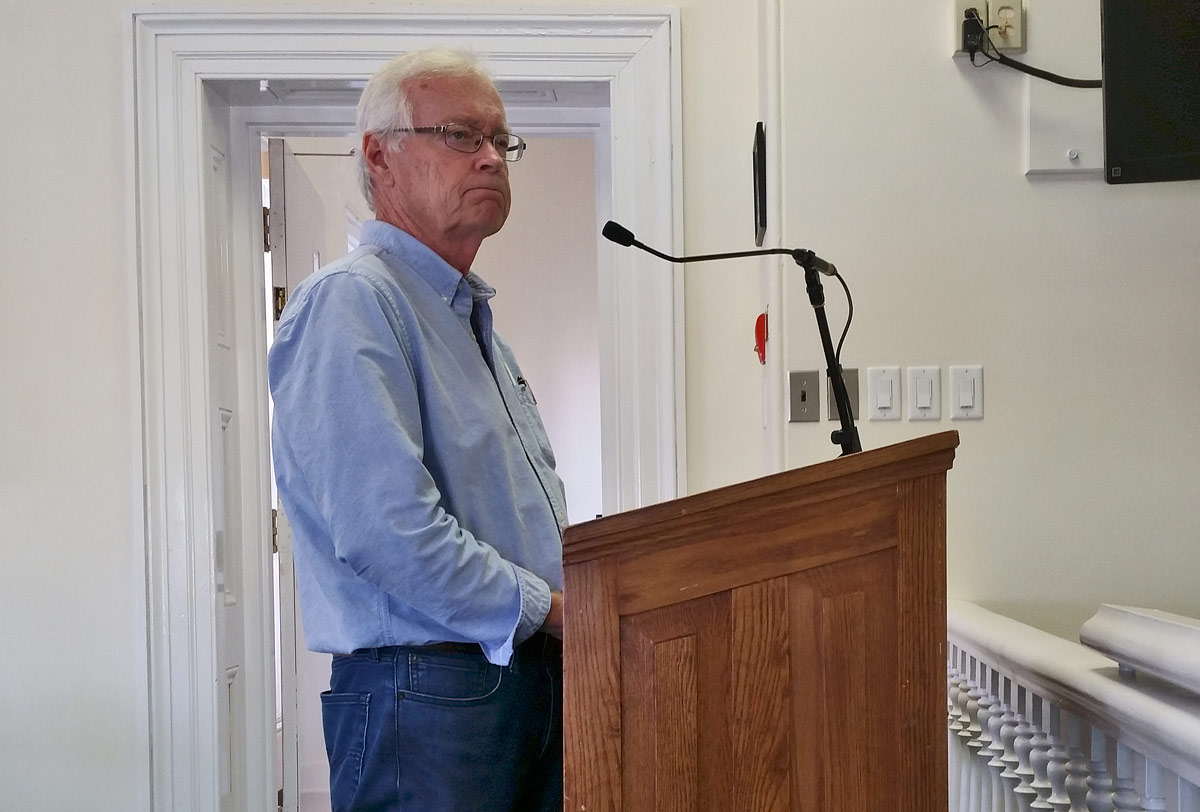 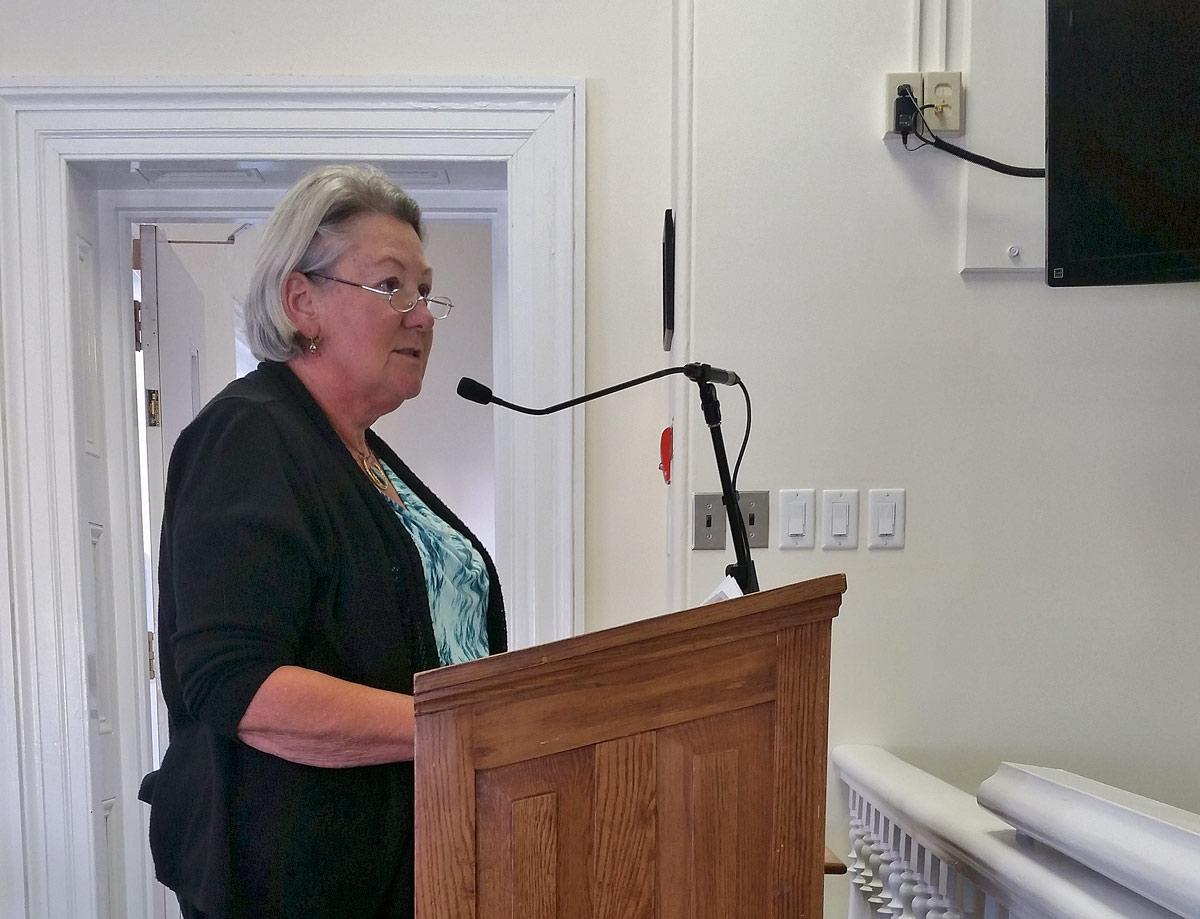 Since it was a budget meeting, it was chaired by Deputy Mayor John Henderson; in a closing statement he said that any inputs from citizens would still be welcome.

He also reminded everyone that requests for grants can still be made up to October 30 with a presentation supporting requests at a public meeting at 6:00 pm on November 13.

The next steps would be individual department sessions followed by the final (draft) budget to be made public at a 16 January 2018 all day meeting.

“Few citizen submissions”……one doesn’t suppose it’s because this town council hears but doesn’t listen to what it’s citizens says ?
Perhaps townspeople have been exposed too long to a civilian version of battle fatigue.
.

Or the vast majority are happy with the Council they freely elected.

With respect to the Mayor’s comments, “However, Mayor Gil Brocanier said that there were moves in responsibilities between departments and what counted was the overall budget which had risen 11% from 2013 to 2016“.

I believe that tracking trends within departments is important as well in that it helps to identify where disproportionate resources may be being allocated. Otherwise, how can councillors make informed decisions when considering competing priorities?

In the past, Mayor Brocanier told The Cobourg Taxpayers Association not to use the Town’s FIR numbers**. In an Email to me in Sept 2014, the Mayor said, “…we suspect you have obtained the information from the FIR and the problem with this is the FIR does not contain the level of detail or categories that matches our own financial reporting system and subsequently some of our information is grouped in the wrong categories and painting a very different picture than reality.

Where is an engaged citizen supposed to go to get the right information then?

**Financial Information Return (FIR) is the main data collection tool used by the Ministry of Municipal Affairs and Housing to collect financial and statistical information on Municipalities. The FIR is a standard document comprised of a number of schedules which are updated each year to comply with current legislation and reporting requirements. The FIR data is then stored in the MARS (Municipal Analysis and retrieval System) database.

Good to see that you keep a close eye on department budgets and the allocation of resources.
Have you now decided whether it is better to hire permanent staff or short-term consultants to deal with Council’s increasing workload. You seem to be opposed to both.
And while we are here – how many members does the CTA have and what is the demographic?