A few days ago, Patrick Brown, the leader of the Provincial Conservatives, released his election platform and his first stop on his campaign tour was on Monday night in Port Hope.  Organized by the Progressive Conservative candidate, David Piccini, the Town Hall meeting was short, open to everyone and NOT a fundraiser.  The meeting was in the gym at the Port Hope High School and was well organized with a full house of about 150 people. Patrick spoke about his “People’s Guarantee” and kept the tone constructive with little of the negativity we associate with politicians.  His platform has five points and after explaining those in some detail, he opened up the floor for questions.

Most of the questions were about business and the cost of hydro but there was a pointed question about whether he would consider amalgamating the Catholic and Public School boards; his response was that it was not in his “People’s Guarantee” (his platform) so would not be something he would be considering.  When asked about how his promises would be paid for, he responded that it would be by eliminating waste and given the amount of waste, that it would be easily achieved.

He said that if he could not achieve all the promises in his “People’s Guarantee”, that he would not stand for a second four years.  He said that he is putting everything on the line in committing to the Five Guarantees and that all PC Candidates had also signed up to this commitment.

There were lots of young people in David Piccini’s team as well as the traditional older supporters.  This follows the trend of the Federal campaign with the youthful Adam Moulton but David is a quite different person and has good appeal across the spectrum. 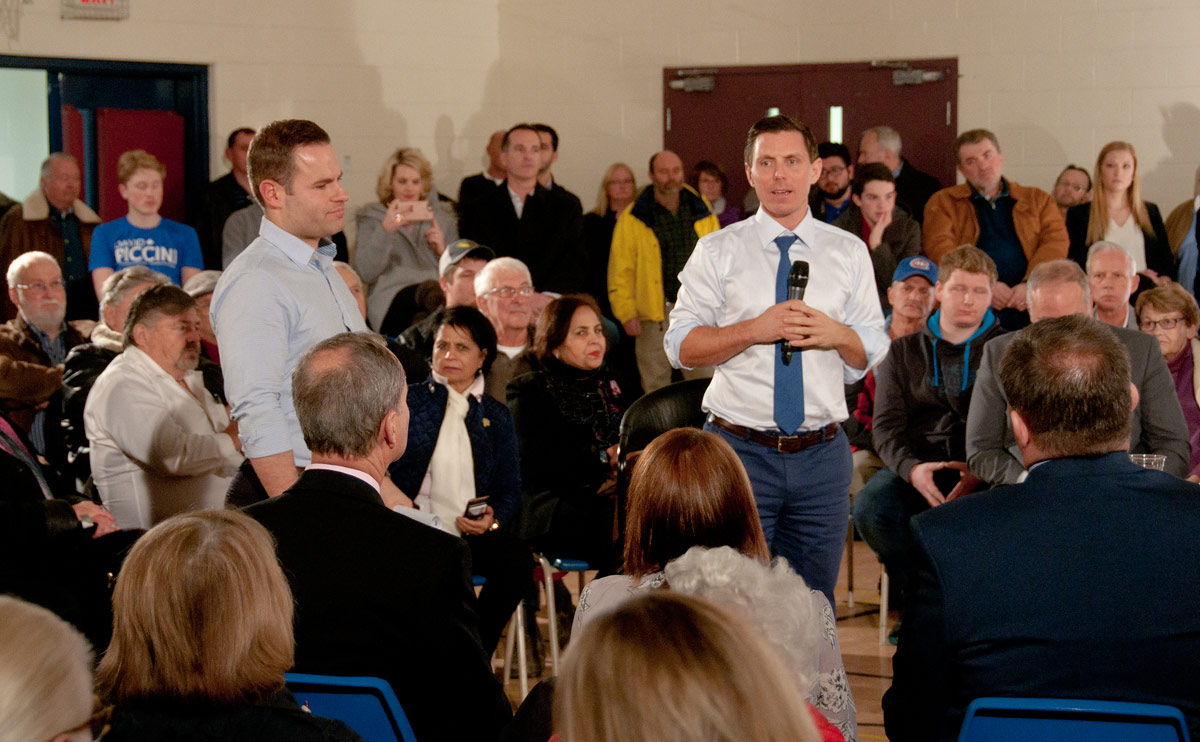 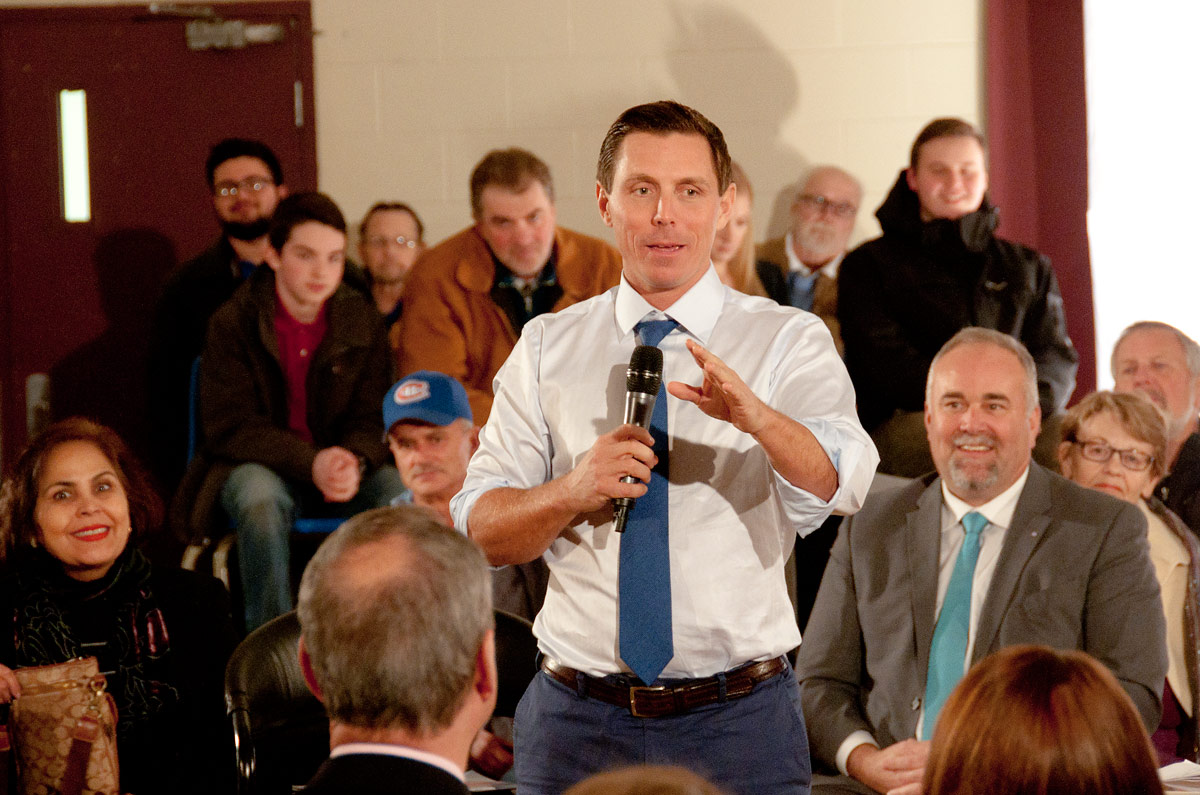 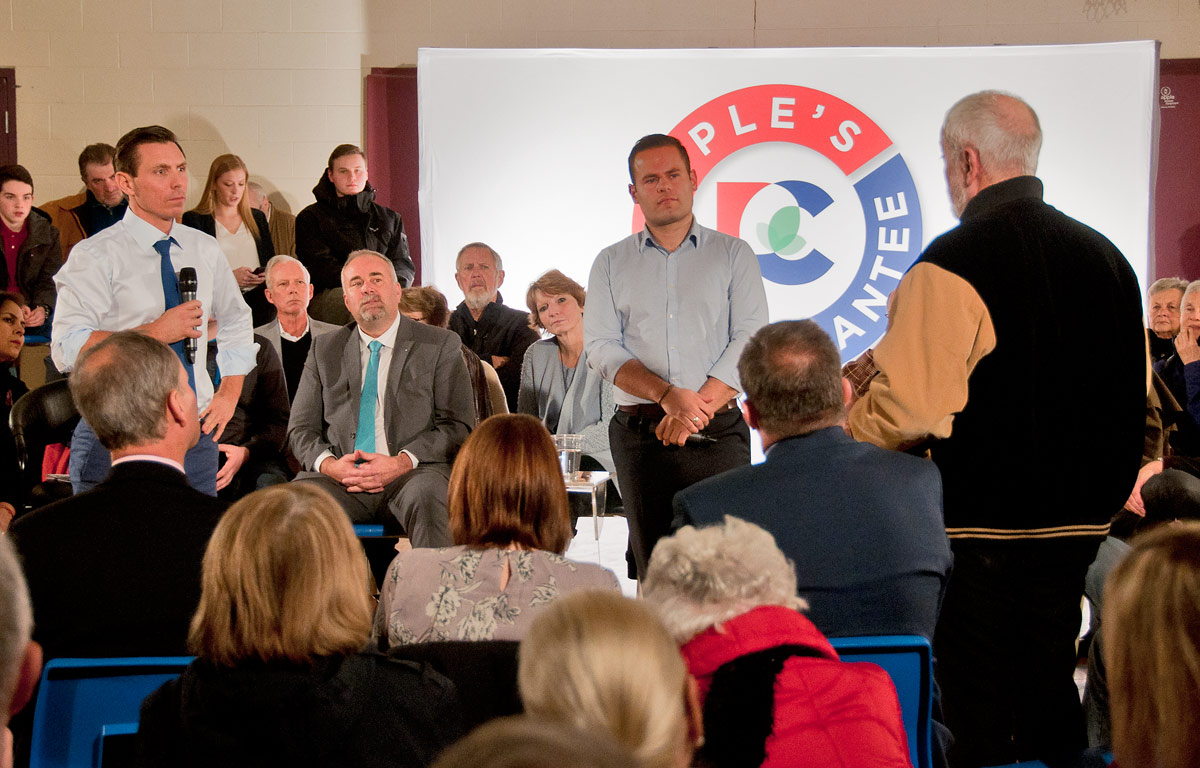 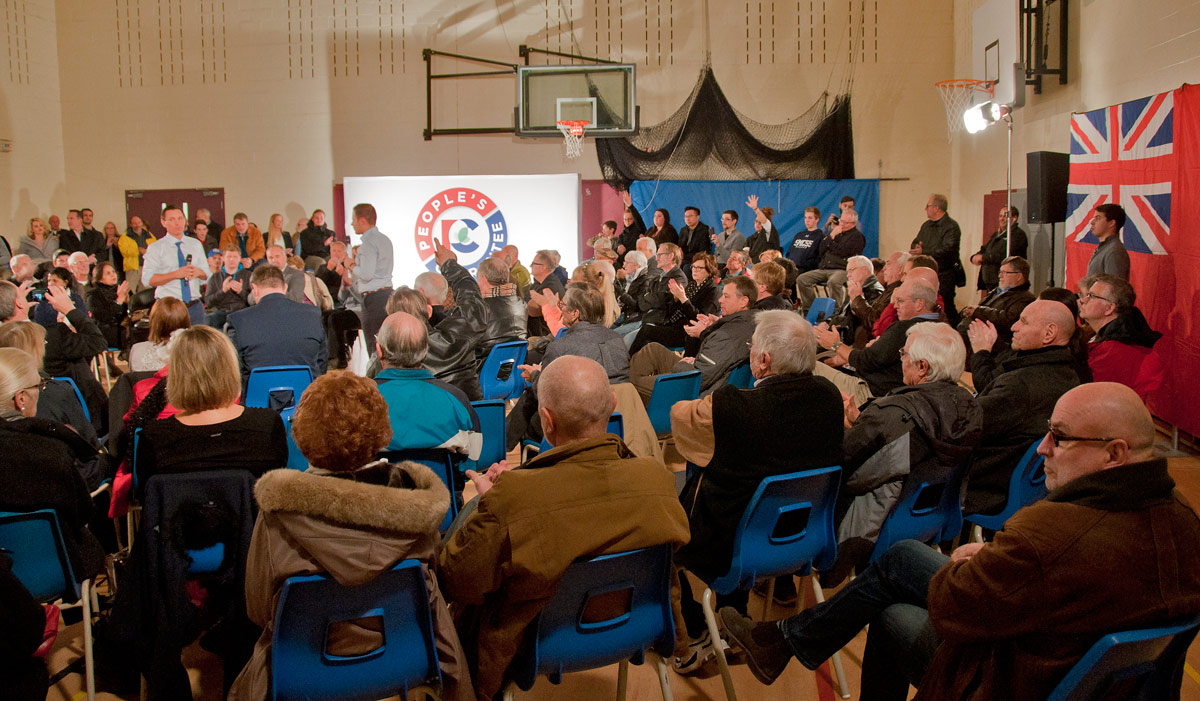 Some of the crowd

Looks like people on the right don’t have a party to vote for next election. The PC platform is essentially a Liberal platform. Not a bad idea as their base, though abandoned, will likely vote PC anyways and they will probably steal a good number of Liberal voters who are essentially voting Liberal without the scandals. Now that said maybe people will see this for what it is and that is them shamefully giving up on the parties basic principals to get in power. Does that bode well for anyone?

If ever there was a no-brainer political race this is it. We sat idly and watched KW decimate the Province of Ontario – she is arguably the worst Premier in Ontario’s history. If you feel the urge to vote Liberal please do us all a favour and spoil your vote OR get on a bus and leave for [insert different Province here].

It appears that people can find all the perceived faults of a new person and are reluctant to even try something other than the same old same old…even though it’s a disaster provincially and federally. Apathy towards both levels of government is rife and the beat goes on….
Guilty until proven innocent is the mantra in some cases.
I understand that Ontario used to be a “Have” province and became a “Have not” province under Liberals and yet continues to vote “Anything but Conservative”
Why ? One can get elected and voted out next election or is it better to just complain and carry on as usual while politicians municipal and federal continue to do what they want.
I know where my bet lies.

I never voted for Ms. Wynne nor will I.

I hope that I am wrong but I haven’t heard Mr. Brown mention cancelling any of Ms. Wynne’s vote buying programs other than the Green Energy Act. He’ll provide tax cuts by raising carbon taxes. He’ll hand out billions for child care. He’ll continue with free drugs for some. He’ll raise the minimum wage. He’ll continue to borrow to reduce hydro rates. And… What have I missed?

I noticed he didn’t touch on the Port Hope Contamination issue and Property Value Protection Program that was put on hold a few yr.s. back
But it sure surfaced in the Peterborough News this am.

All Pols say this but provide no examples, Brown is no different where are his examples – hot air and usual Pol promises.

But what I find intriguing is his slogan “Spend less and Get More!”, sounds like an oxymoron to me – the slogan not the man!

“Spend less and Get More!”

It’s sloganthink. It appeals to those who prefer quickythink, reaching a depth of thought like a flat stone bouncing off the surface of a still lake. It appeals to those into jingospeak and others who need life’s complexities reduced to simplespeak. Sadly, it’s politically effective.

I voted Liberal last time and regret it. I will be watching Brown carefully in the coming months. I am ready to vote PC this time as long as they can convince me that they will follow through on campaign promises and fight for the people of Ontario. Transparency and integrity are important. I know that politicians can be quite good at making promises that in the end, are not followed through on. In my opinion, Ontario AND Canada needs a change in the direction it is going. Again, I will NOT be voting Liberal! .