Today was a Scottish day in Cobourg. As well as a day for the kids to dress up for Halloween downtown, there were also the Cobourg Legion Pipes and Drums on parade and the Mayor announcing that Cobourg now has its own Tartan. The band marched up Third Street then performed outside Victoria Hall but then moved inside for the Mayor’s announcement. There was a good crowd probably mostly because of the DBIA’s Halloween event on the same day. Mayor Gil Brocanier was born in Scotland although he came to Canada at an early age so it was no surprise to see him wearing a kilt – see photos below.

In his speech, the Mayor said:

…..(Victoria Hall) was opened in 1860 by Edward VII then Prince of Wales. To link with that event, the Cobourg tartan is largely based on the 1853 Balmoral tartan designed by Victoria’s husband Prince Albert. Teamed with that classic design is a distinctive element from the Northumberland Check – a simple shepherd’s plaid that has enjoyed cross-border popularity in Scotland for very many centuries. The colours are from Cobourg’s town logo and its coat of arms granted in 2007 by the College of Arms in London.

The Tartan was woven by Lochcarron of Scotland, the world’s leading manufacturer of tartan and has been registered with the Scottish Register of Tartans.

A special Committee was formed to assist in the development of the Cobourg Tartan: Ian McFarlane, Karen Stinson, Marjorie Hunter, Pauline Davidson, James Bruce and Councillors Suzanne Seguin and Debra McCarthy. They worked with Brian Wilton of Scottish Tartans Authority, an amateur historian and Tartan expert. Working with the Committee, Brian collected information about Cobourg’s geographic location, physical features, history and culture in order to develop the colour palette and design for the Cobourg Tartan. Also assisting with research was Thomas Irvine at the Cobourg Public Library.

The Tartan is shown at right.

Ties & Scarves using the tartan are now available for sale in the Municipal Office at Victoria Hall. Ties: $25; Scarves: $23. Cash Only, HST included. 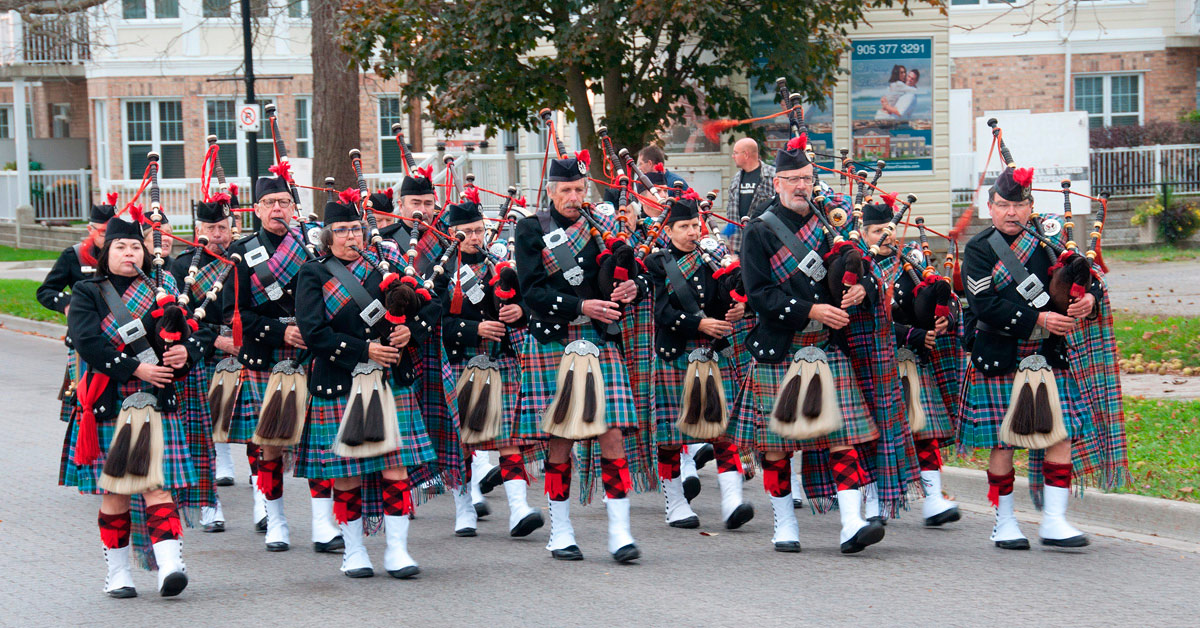 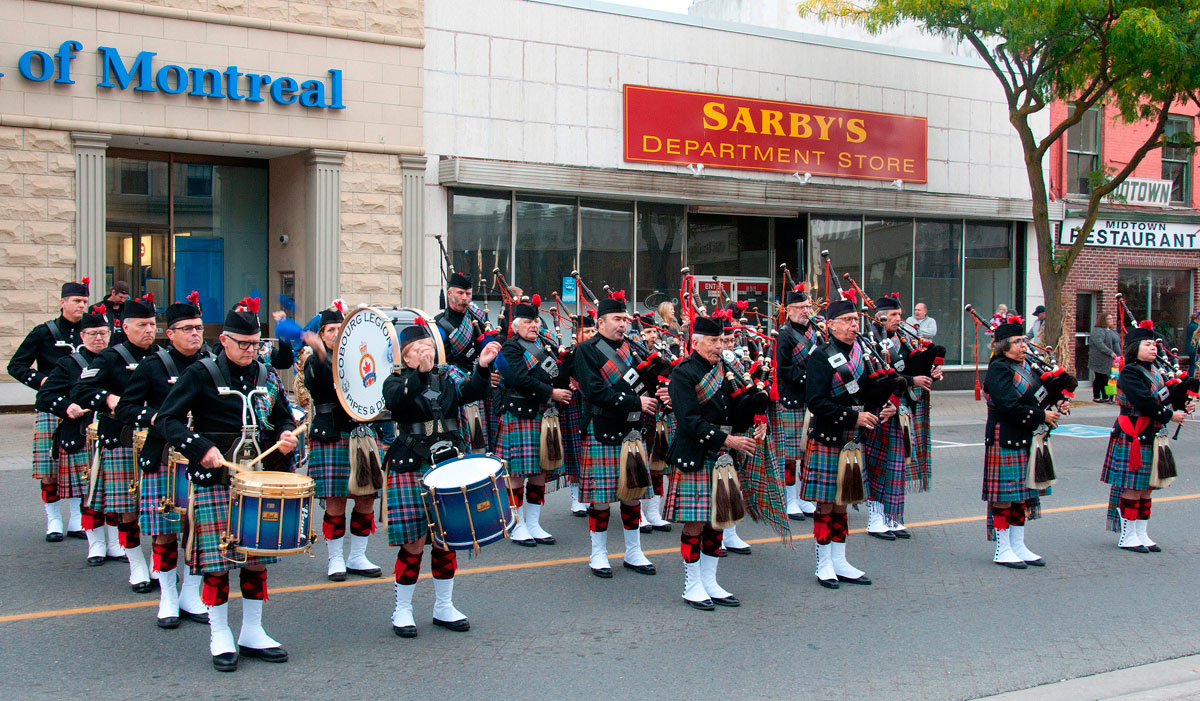 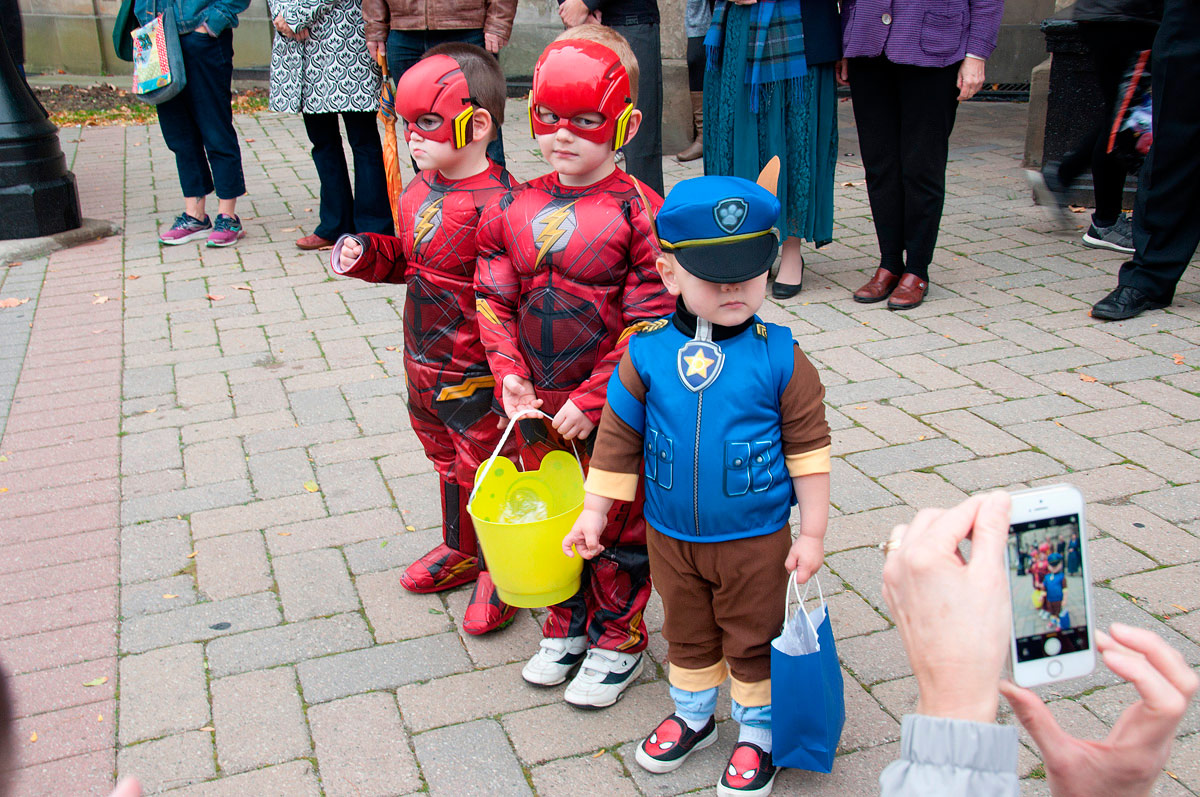 Three kids dressed for Halloween joining in the celebration 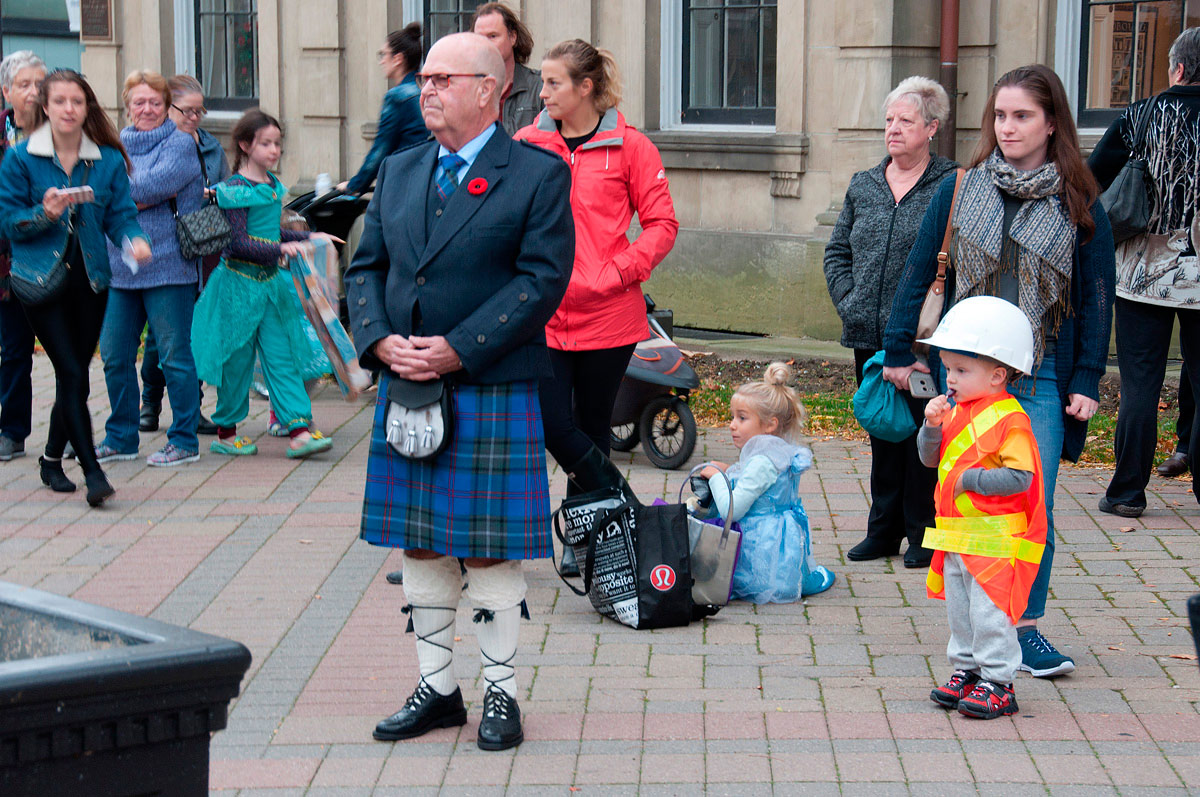 The Mayor dressed in kilt - watching the Pipes and Drums perform 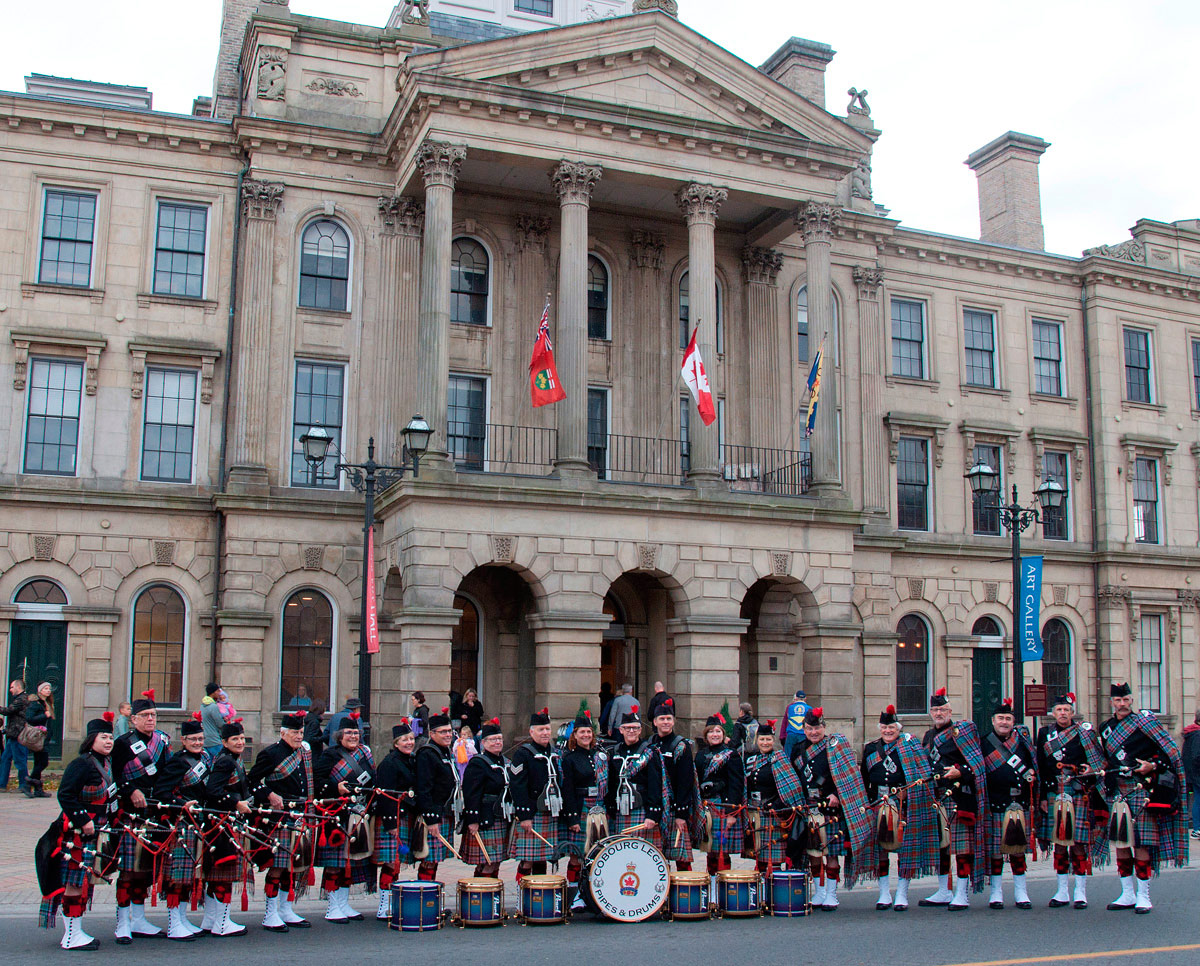 The Cobourg Legion Pipes and Drums assembled outside Victoria Hall 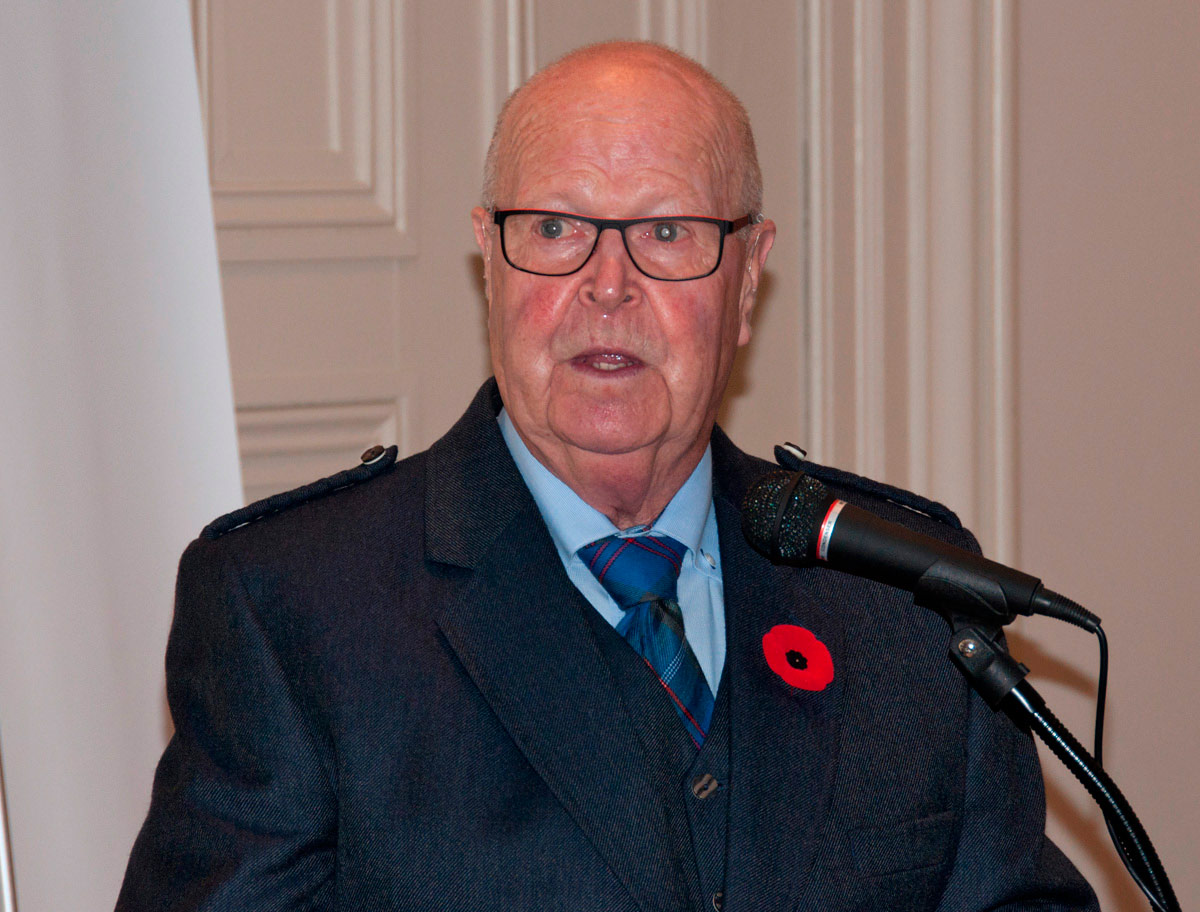 This seems like a gratuitous self-interest project. With all due respect, outside of those tapped to be on the committee, the Mayor and possibly a few others, does this make any difference to anyone or add a richness to one’s life which prior to the tartan did not exist. I dunno perhaps I’m underestimating the level of interest in this project, maybe I am cynical. I wonder what the cost of the tartan’s development was?

Great day for all the families and the children thanks goes out to all the shop owners for the treats and to the council for making this town a feel good town always some thing going on that makes this a great place to live . Mr. mayor you looked great in that new tartan and many thanks to the pipers .,, maybe when they get the kraft plant going again this will be a very high and feel good town ? Robert

It was wonderful turn out and I am happy to have been there with my camera!

I’m sure the town’s residents will sleep better, knowing this vital problem has been solved!