Up until now, there had been only one All-Candidates meeting/debate scheduled and that was by a joint effort of the CTA and Northumberland 89.7 on October 10 – but now it has been cancelled.  The radio station issued a statement that there was a disagreement on format but the CTA (Cobourg Taxpayers Association) said that the problem was that some Candidates did not want to participate if it was organized by the CTA.  It seems that the venue has been reserved and paid for and it is hoped that another organization will take over and hold the much needed forum for Candidates to air their platforms. Although the Mayor has been acclaimed, there are still important contests for Deputy Mayor and Council. 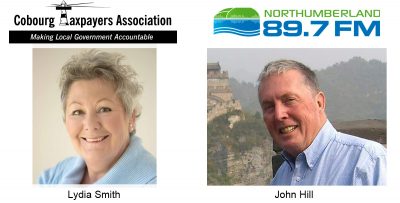 The two organizations offered somewhat different explanations but the end result is that they will no longer co-sponsor a Candidates’ debate.

As I advised earlier, Northumberland 89.7 planned to partner with the Cobourg Taxpayers Association to promote, moderate and broadcast a municipal all candidates’ debate. Unfortunately, Northumberland 89.7 and the CTA could not reach agreement on the format. Accordingly each side has determined the planned debate should not go ahead. Please be advised that the October 10 date should no longer be held open unless some other civic minded organization opts to use the date and rented facilities.

Northumberland 89.7 will continue to cover all aspects of the race and candidates will be contacted to appear on air over the course of the next few months.

Subsequently, Barry Walker, Chair of the board of Northumberland 89.7 FM issued an additional statement in response to the CTA Press release.  A full copy is in the links below but basically it says that they understood the event was cancelled by CTA.  Further, Barry said “It is our hope that something yet may be worked out so the event can proceed.”

Lydia Smith, President of the CTA issued a Press Release – a link to their full statement is below the following summary:

The Cobourg Taxpayers Association (CTA) announced today that they are withdrawing from hosting the municipal all candidates event. They were to co-host with 89.7 FM.

“Apparently, some candidates are concerned that CTA’s past activities and delegations to council illustrate a political viewpoint and they do not wish to participate in a CTA sponsored forum. This is unfortunate. It is a disservice to our community and to public engagement. Our primary interest is to help our community to thrive.”

“It is unfortunate that 89.7 FM, as an important media outlet in our community, decided not to proceed with the all candidates meeting.”

The CTA did offer the “reserved and paid for” ballroom at the Best Western to 89.7 FM for their exclusive or partnered use. The radio station declined.

Smith added, “The Cobourg Taxpayers Association will attempt to find another community-minded group or media organization, who will host the event. Suggestions from the public, media or civic groups are welcome.”

In addition, Lydia told me in an email:  “You could actually say that the CTA withdrew because of lack of interest from the candidates. Out of the 9 invitations sent to councillor candidates, 6 did not send any kind of a reply or even acknowledge that they received our invitation. Out of the 2 invitations to Deputy Mayor candidates, only 1 replied.”

Let’s hope that someone will pick up the ball.

Meanwhile, both organizations are planning to help candidates publicize their views: 89.7 FM will be interviewing candidates on the radio and the CTA will be using their web site to publicize candidates’ answers to questions.  Cobourg News blog will also be doing something similar closer to the election.

One issue I will be quite curious to hear where the candidates stand is on cannabis, cannabis production and retail sales within the Municipality. Clearly most of our outgoing elected officials where in favour of, at least, the production of the cannabis within town – I wonder what the position is of the hopefuls..

Ideally any debate should not give a perception of being slanted in any one-way or another – that said I hope there are other organizations that step up to organize a municipal leadership debate for this group of candidates. The CTA should have an opportunity to ask questions of the candidates just as any other interest group or engaged citizen. Very disappointing that our Mayor will be acclaimed and not have to place his own record in the spotlight. This is not to suggest he isn’t qualified however he should be taken to task prior to simply assuming the seat. This only validates that Council, specifically the Mayor’s role, is designed for the retired or local employed-for-self…

A couple elections ago an all-candidates meeting was held at the Library and was sponsored by a local environmental/sustainable group, whose name escapes me. I accepted that there would be a slant insofar as questions relating to the environment would be asked, and so it was, but it was not exclusive. Any and all questions were included. I would expect the same if the CTA sponsored a meeting — their supporters will be asking questions of CTA concerns but they would not be exclusive. So what is the problem?

From the CTA statement: “Apparently, some candidates are concerned that CTA’s past activities and delegations to council illustrate a political viewpoint and they do not wish to participate in a CTA sponsored forum. This is unfortunate. It is a disservice to our community and to public engagement. Our primary interest is to help our community to thrive.”

That’s pretty rich. It’s completely obvious to anyone who follows these matters that the CTA very much has a political viewpoint, and I for one certainly don’t agree that their primary interest is “to help our community to thrive.” From where I’m sitting, their primary interest appear to lie in pinching every penny and in naysaying as many new initiatives as possible.

I for one will be casting my vote for people who do not seem to share the CTA’s opinions and who are likely to vote against the CTA’s wishes. They may call themselves the Cobourg Taxpayers Association, but they certainly do not represent this taxpayer.

I believe that Johnny Percolides and Emily Chorley are CTA members.

Anyone, who has read the posts of the anonymous CTA folks over the last few years, knows where they are coming from – the far right.
These posters have showered the outgoing Council and the permanent Staff with insults, insinuations, suspicions, half-truths and lies.
Just look at the two ‘Holdco’ posts below and you get the odour of muck.
“Out of the 9 invitations sent to councillor candidates, 6 did not send any kind of a reply or even acknowledge that they received our invitation. Out of the 2 invitations to Deputy Mayor candidates, only 1 replied.”
No wonder that the great majority of serious candidates don’t want to be tainted with the CTA.

“Anyone who has read the posts of the anonymous CTA folks over the last few years, knows where they are coming from – the far right.”
Would it be fair then to make the same statement coming from those who make an opposite opinion post being Far Left ?
Free Speech isn’t necesarily Right or Left ….
To “assume” anything makes an ass out of you and me !

Now let me think where that is on the political spectrum. There must be a near right and also a middle right before it escalates to “far right”. Whew, that’s cutting it close to the next level; extreme right, followed by nazis and facists.

It used to be during the McCarthy era of the Cold War that there were Reds under every bed, pinkos to the right of me, fellow travelers to the left of me, all around me political mediocrities. Nowadays it’s the imaginary nazis and facists.

It is better when you go all piranha on their statements, but to cavalierly dismiss the whole kit and kaboodle as “far right” is an example of political mediocrity, shallowthink, a subset of Nothink at all. Orwell called it quackspeak.

Hey Walter, which of the 9 candidates for Councillor are the serious ones and which are the not so serious ones?

Cowards! Afraid of the questions no doubt.

Thank you CTA directors: Ms Smith and Messrs Lambert, Pagnuelo, Nabiesczko, Strauss, Walker and Williams for organizing an All-Candidates meeting.
It would have been even better if one or two of you had been on the stage as candidates yourselves.
After all, in a guest column in a local paper your Mr. Strauss stated “replacing our politicians and town staff who ignore Cobourg citizens who pay their salaries would be a huge step in the right direction.”
Replacing our politicians and town staff? Looks like that huge step won’t happen.
So, as my friends, who sit in Rosa’s cantina in the West Texas town of El Paso, would say “All Hat And No Cattle”.

How can we force our next Mayor to open the “books” at Holdco??? Has he agreed to this or will the next bunch in power come up as “no change” from the past. Would somebody tell all the candidates they are getting involved in politics…town council is not supposed to be a little club with everyone swimming in the same direction.

The next mayor might not be getting the automatic seat on the board and might have a hard time getting to those books.
But even if he could, I doubt we’ll ever see the light of day shine on the details of all of their slush funds.

As the new mayor is acclaimed and not in election mode why not pose that question about Holdco to him now?
An early test of things to come possibly.
A response/non response to an honest question from a taxpayer would be a good start of how the new council may operate.