The First World War ended in 1918 with an Armistice and Cobourg will be commemorating this with many events this Fall in the several weeks up to November 11.  Director of Recreation and Culture Dean Hustwick, said that Cobourg’s commemoration will be the largest in Canada!  At the Council meeting on February 26, historian, playwright and organizer Hugh Brewster gave some of the history of Canada’s and Cobourg’s involvement in the War and listed all the planned events.  Canadian General Arthur Currie, who played a major role in the success of the Canadian army, was accused by the Port Hope Evening Guide of pursuing a last minute effort to capture Mons for his own glory.  He sued them for libel and the trial was held in Cobourg’s Old Bailey Courtroom.  The Centrepiece event will be a re-enactment play staged in the same venue.

The Northumberland Players assisted with finding all the required actors and others in Cobourg assisted in getting it organized and staged.  The official opening on September 29 and 30 will feature Peter Mansbridge and his wife actress Cynthia Dale – Hugh said that invitations will also be extended to the Prime Minister, the Governor General and the Minister of Veterans Affairs, Seamus O’Regan.

Elizabeth Dowdeswell, the Lieutenant Governor of Ontario is expected to attend Cobourg’s traditional November 11 ceremony and in between will be 3 plays, 3 featured speakers, a musical event, exhibitions of Art and Photos and possibly public art, films and a documentary created of the whole program.

See links below to download the complete preliminary program and see the Cobourg Internet Calendar for details of dates and times. Here is a summary: 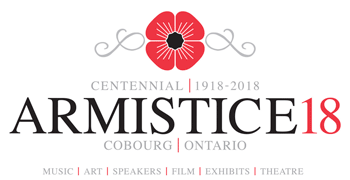 A series of talks by leading Canadian historians will be held on October Sunday afternoons at 2:00 at the Cobourg Public Library, 200 Ontario St.

Throughout Armistice ’18, a multi-media exhibition on World War I will take place at Victoria Hall.

Cobourg Blog News will post on any news about updates to this program.  Stay tuned.

Congratulations and many thanks for all the hard work in putting this event on the calendar. I wish we could get this kind of enthusiasm from all including the photo -op politicians when it comes to bringing new manufacturing business to Cobourg. We need new jobs for our young people…new vitality for Cobourg.

Hi John, I don’t believe your article id’s the champion for this effort. Kudo’s to them and whom ever organized it.

I believe this was a joint effort between Hugh Brewster, Dean Hustwick and Jack Boyagian although probably others were also involved.

Thanks. Good work, good purpose. Congrats to all.

Great idea for WWI Remembrance.!
In the meantime ,let’s remember WWII as well, how about the HMCS Cobourg ship’s bell,its White Ensign being removed ffrom the mayor’s office as well as the photograph and other memorabilia which have apparently disappeared, being reinstalled in their original rightful place for public display in the town hall foyer.
That memorabilia was removed from the display case supposedly temporarily when renovation /painting was done.
That memorabilia display belongs to the people and should be displayed publicly in the foyer as was originally and not mounted in the mayor’s office out of sight of the general public.
Let’’s not forget Cobourg’s part in WWII as well .
Lest we forget .

Very good point. I think that Cobourg’s Poet Laureate should be reciting In Flander’s Field at the Remembrance Day ceremonies at the Cenotaph. It was done in 2014, but it should be a regular duty for a municipal poet laureate; https://youtu.be/cUdmmhZ5NvE

I believe that Ted Amsden has completed his term as Poet Laureate and I don’t recall any replacement being appointed.

He resides in Brighton now. His term expires during the upcoming municipal election. No calls for nomination have gone out yet. The appointment is made by the incoming council. Until then, Ted is Poet Laureate, then he becomes Cobourg Poet Laureate Emeritus.

Full details are now available for Queen’s Jubilee Celebrations on May 29.  Go here.

Information for the upcoming Provincial Election is provided here.  Included are names and affiliation of the six Candidates with their contact info, results of previous elections, info on 2 All-Candidates’ meetings and location of advanced polling.

Three surveys are about naming the Painted Table Project (closes June 10), the  Stormwater Management (closes May 26) and Phase 2 of Public Engagement on the ICSP (closes June 1).