With the slogan “Cobourg has it all but welcomes more”, the Downtown Coalition launched its marketing campaign to sell the merits of opening a business Downtown.  Funded partly by the Province, it was initiated as part of the Downtown Vitalization Program and called the Business Attraction Marketing Plan (see link below).  Cooperating in the plan are the DBIA, the Town’s Economic Development Department and the Chamber of Commerce. The program includes a new website (www.startherecobourg.ca), many videos and a facelift for several stores using window wraps – starting with the empty “Sarby’s” opposite Victoria Hall.  There will also be a social media campaign. The announcement of the launch started today in the Old Bailey courtroom and moved to King street where the Mayor unveiled a new sign for the campaign.

MPP elect David Piccini together with a good representation of staff, councillors, realtors and the DBIA were at the announcement. Mayor Brocanier, MPP David Piccini, DBIA Chair and Councillor Suzanne Séguin spoke about how the Downtown vitalization program was doing well.

Mayor Brocanier said that 5 of the 7 vitalization strategies have now been completed with 2 more coming in the fall.  He expects this campaign to continue for about 12 months.  As well as targeting new entrepreneurs, the program also targets existing businesses in a 45 minute radius who might want to start a second location. Gil also spoke about the benefit and importance of measuring success and pointed to Carol McCann’s efforts on this (see link below).

David Piccini acknowledged the good work done by the previous MPP Lou Rinaldi in getting funds for this project and assured us that he would continue to do provide support.

Adam Bureau said that this campaign has been a priority and is the most visible initiative as to why businesses should locate here. He believes that it will make Downtown even better to live, work and shop.

Councillor Suzanne Séguin spoke about the benefits of working together and agreed with Gil on the importance of measurement of results.  She said that we must not spend taxpayers’ dollars without measurement.

After the formal presentation, Gil invited everyone to watch as he unveiled the sign across the road from Victoria Hall. After donning safety gear, he navigated a bucket up to the sign and removed the cover. Traffic was stopped by no less than Deputy Chief Paul Vandegraaf (he was there to attend the ceremony).

The intent of the Window Wrap in Sarby’s window is to show the potential of the building.  I spoke to Yossi Rappaport who is one of the new co-owners of the building.  They are obviously participating in the Town’s marketing efforts and one of their options is to allow the space to be subdivided for multiple tenants.  Meanwhile they have cleaned out the interior and plan to spruce up the exterior some more.

Photos of the Launch 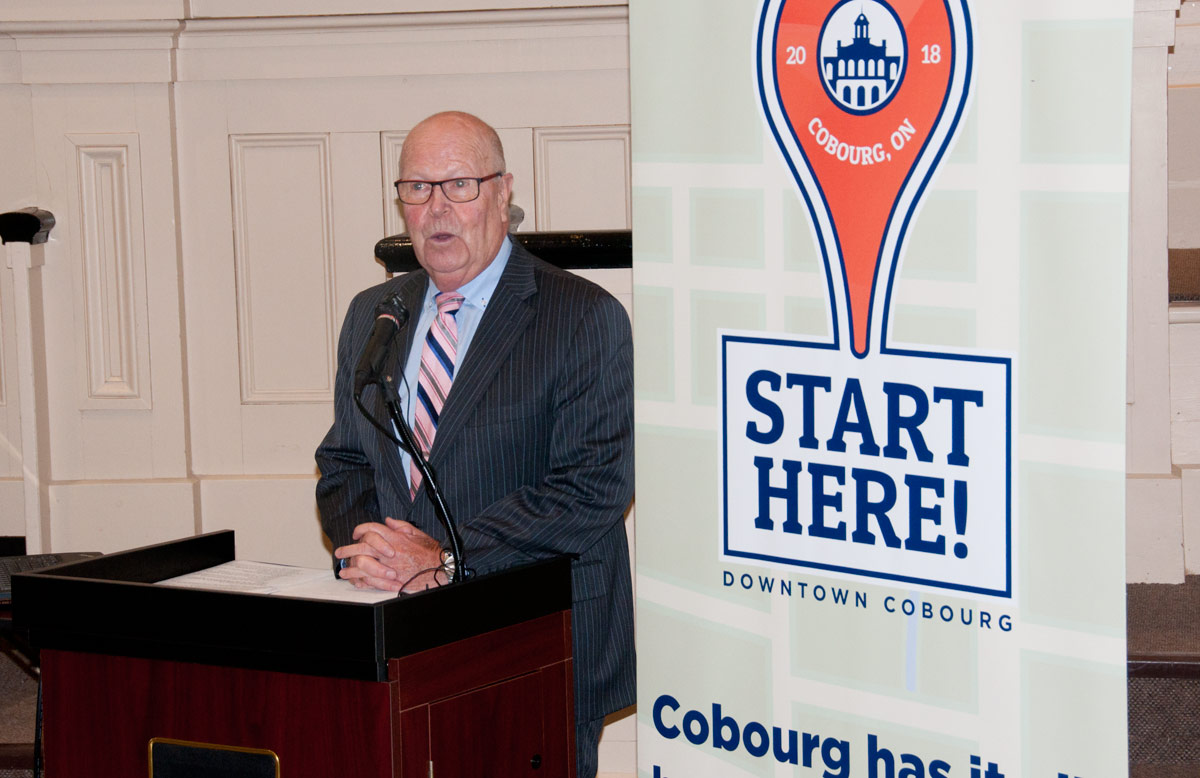 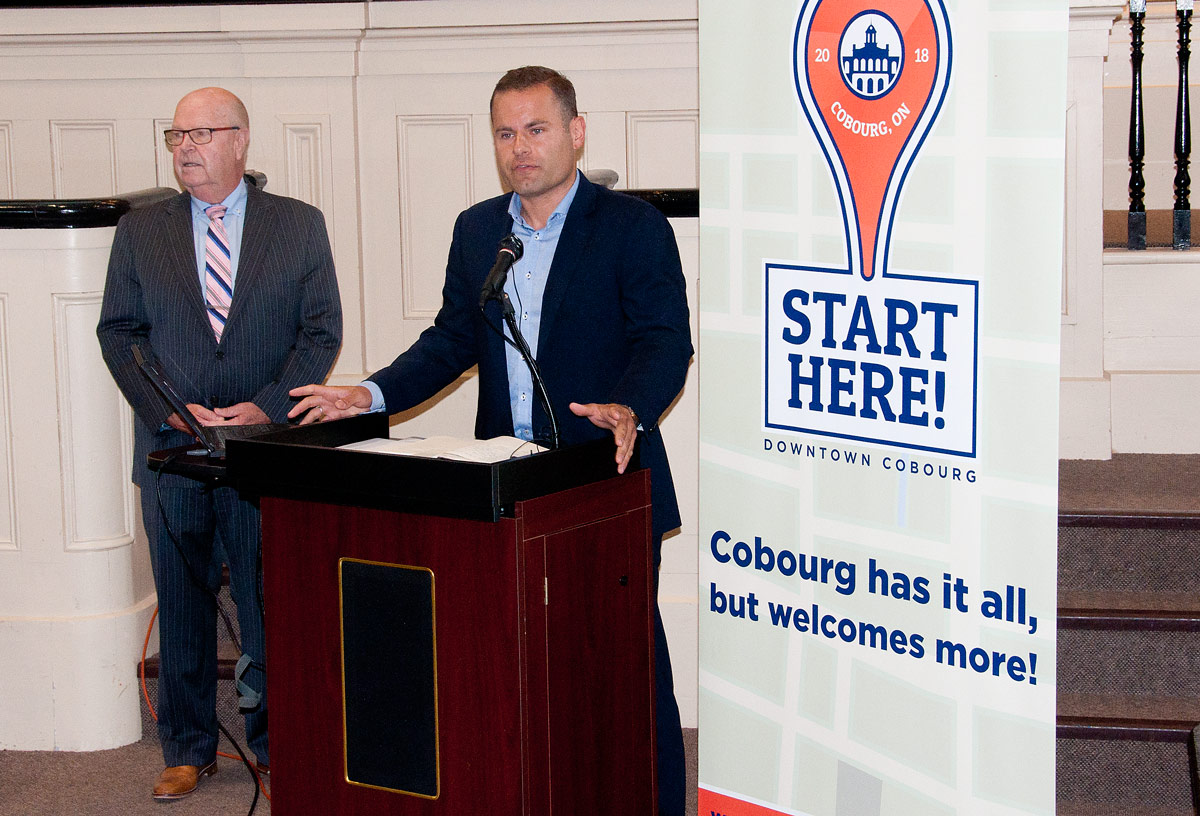 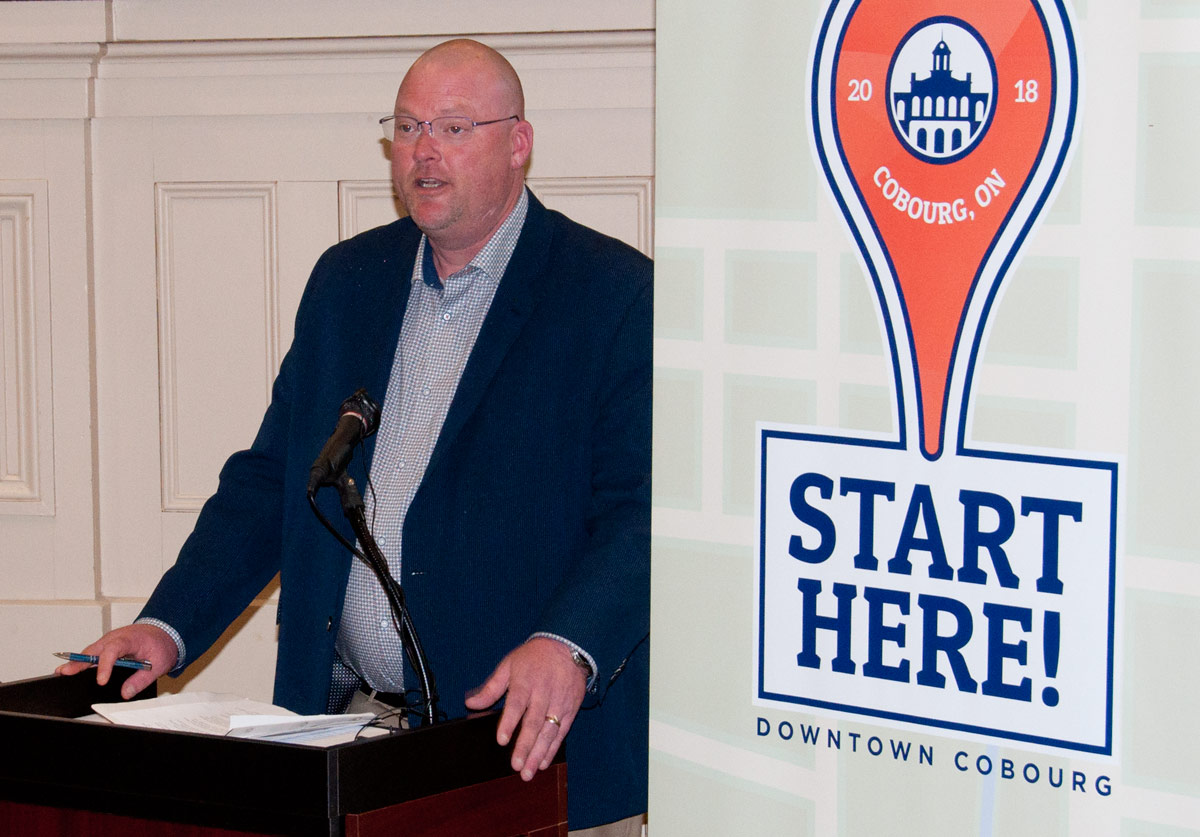 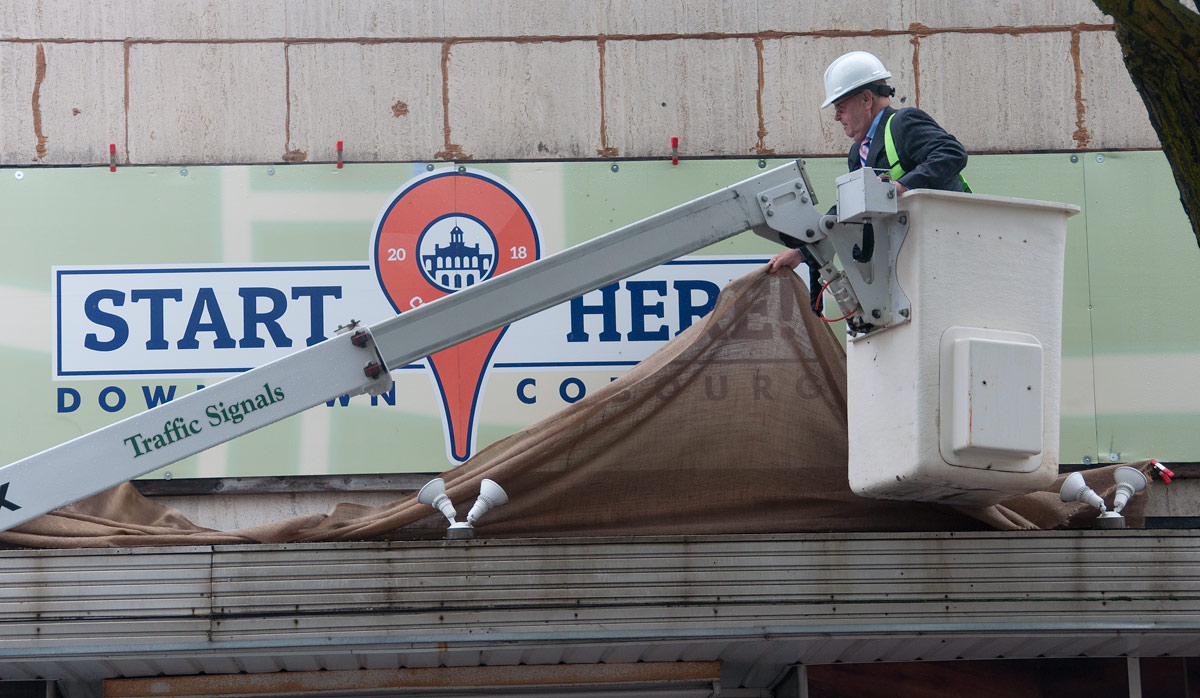 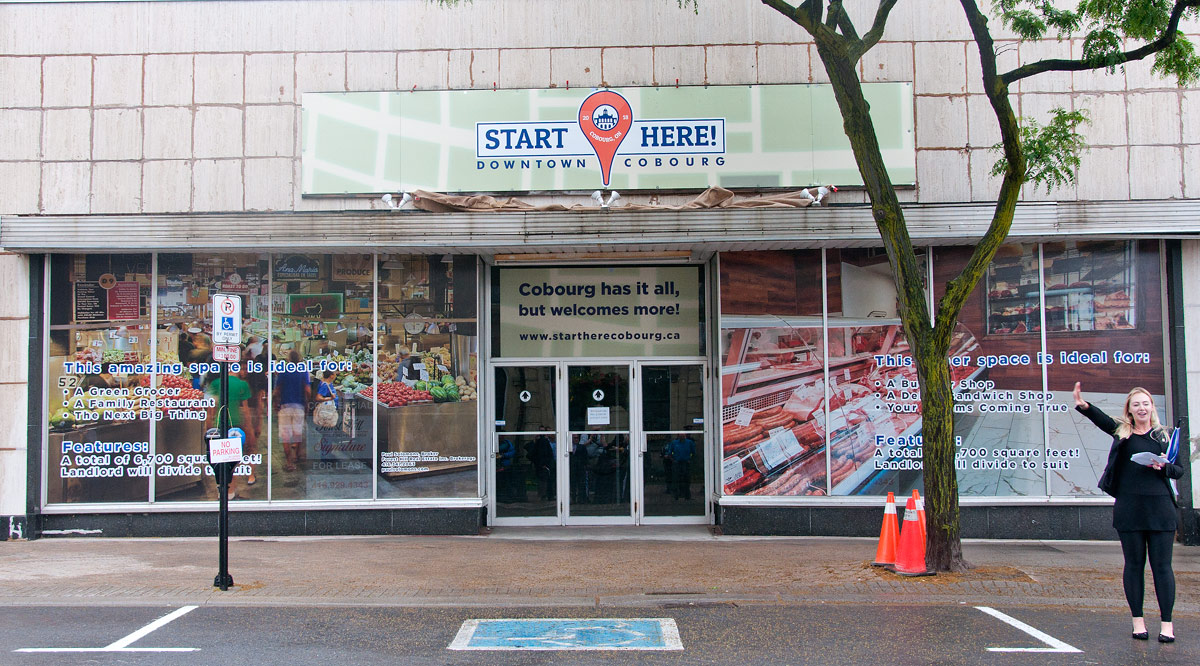 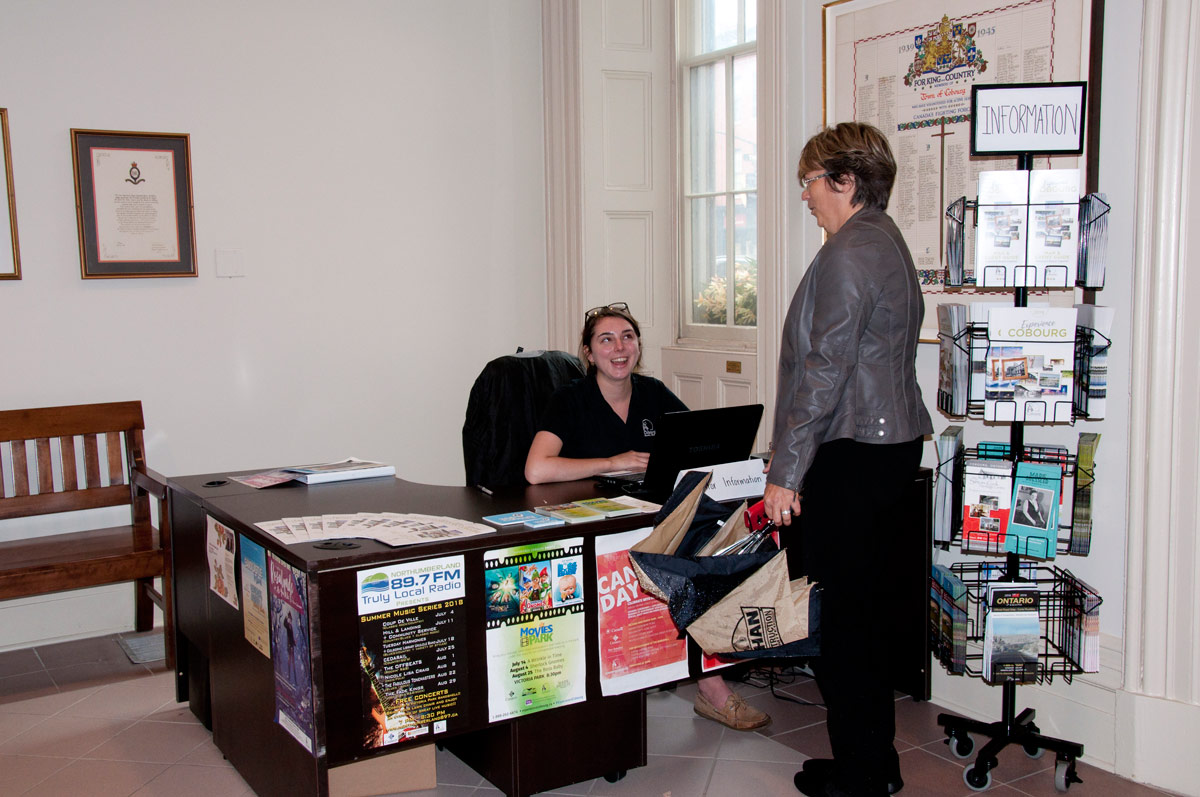 Separately, Tourism information has moved to the Lobby of the Town Hall – for the summer.  It looks like the Town’s Business and Tourism promotion efforts are ramping up.

The vid is a slick dime-a-dozen production that lacks creativity. It has only gathered 222 views at this point. It has not been shared by anyone at this point. Compare this with Port Hope Ganny vids that inspire hundreds of shares. The vid url should be distributed to all of Cobourg’s employees for them to post on their social media. Cobourg Tourism’s production of vids are all over the map, posted on different platforms within YouTube instead of within one portal.

Tourists to Cobourg have produced plenty of vids of their experience in Cobourg, and in several cases, gathered more eyeballs than anything the Town has produced — and those tourists do it for free. Looking at the Town vid, one notices that Cobourg lacks one important thing — creativity. But then again, creativity is sorely lacking on this blog. Port hope does a much better job with its creative folks, as exampled by Critical Mass. They are cultural warriors — KUDOS.

“broken record” — an example of the absence of creativity

Will the author of the slogan “Cobourg has it all but welcomes more” please stand up and identify him/herself. Am I wrong or does it have that same teeth-grindingly dull feel that the CAO suggested for our Cobourg 401 signs: “Honouring our past Embracing our future” If it is Mr. Peacock’s invention he must give up creative writing immediately.
As for the video: not bad.

Chuckles!
Tim, you sort of remind me of little Mikey in the Quaker Oats commercial for ‘Life’ cereal, 1972.

GIVE IT TO MIKEY, HE HATES EVERYTHING. https://youtu.be/CLQ0LZSnJFE

Were the 401 signs not just an example? I believe they are using the “feel good town” thing.

Considering our new cannabis industry, there was concern about the mockery factor if we retained the slogan “The Feel Good Town”. Apparently Mr. Peacock’s lackluster offering (which I hope he didn’t invent on company time): “Honouring our past Embracing our future” was suggested as a substitute. Mercifully, we will at least be providing everyone with a belly laugh as they drive by us on the way to somewhere else.

And you remind me of Lawrence Welk — everything is “Wunnerful Wunnerful”.

I have spoken to a few business owners recently who are very frustrated at the lack of support they get from Town Hall. Lots of paper work for permits that get sent back time and time again. Lets hope prospective business owners don’t go in to chat to some of them; they may just take their money elsewhere.

I guess its better than the Brown paper and old News print used to hide the true visible conditions of the interior of many of these stores .
This is a far cry from what other communities ie Bracebridge & Port Perry have been doing , which is to have the landlord openly display the Quality of their wares — move in ready interior of the available shops through clean and glistening windows . Fresh paint , Drywall , Antique metal ceilings , sanded hard wood floors all on display along with a feature sheet posted tastefully in the window so as to not block the view – indicating the uses permitted under the Zoning The hidden advantages to renting this location such as New high efficiency HVAC sys, Low E thermo windows ,
200 AMP hydro panel , Asking Rents and of course the true cost of the T M I . The number of wash rooms is always handy and of course the landlords Name and Contact # # s . this method of marketing has been proven to work in other communities so why are we still masking the situation ????

…so why are we still masking the situation ????

Perhaps because the majority of the vacant space downtown cannot boast any of the desirable features that you mentioned?

Excellent points, worthy of imitation!
But perhaps this is also worth mentioning.
Scugog open to idea of grant program for Port Perry heritage buildings.
https://www.durhamregion.com/news-story/5658532-scugog-open-to-idea-of-grant-program-for-port-perry-heritage-buildings/

You know that this article is 3 years old, right?

What you describe in Bracebridge and Port Perry is, of course, a truly serious attempt to attract businesses to their downtown areas but we’re in Cobourg after all, a place where our politicians have let things slide for years and where our mayor would rather be filmed in a cherry picker unveiling some corny sign than doing something effective like setting building inspectors on the owners of these derelict downtown heritage properties to force them to at least bring them up to code so someone might actually consider renting them. I think MPP David Piccini should have stepped away from this one. And there was certainly no need to thank Lou Rinaldi who could be the poster boy for wasted provincial funds and one of the prime reasons Mr. Piccini was elected. This new initiative, window wraps and all, is about as effective as sprinkling talcum powder on a dirty foot.