The weather was perfect for the first Criterium Gran Prix to be held in Cobourg.  Most races were 40km around the 1.2km course so there were 33 laps.  Each race took around an hour so the bicycles were doing an average of 40km/hr so as well as speed and skill in cornering, endurance was also tested.  Most races had contestants in several categories – for example, the first race had two categories: Elite (Senior) 4 Men and Master 3 Men (the number indicates skill level with 1 being highest). There were few spectators for the first race but there were more at later ones.  I saw only one spill (see photo below) but no injuries.  Although residents on Albert were nominally locked in, in an emergency, they could no doubt exit during the gap between races. 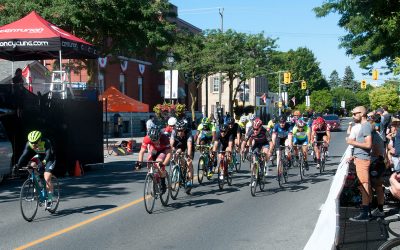 The races started on King Street mid-way between Spring and George, then went down Third to Albert, along Albert to Bagot, then back along King. The photo at right shows riders sprinting along King near the start/finish line.

The video below shows a couple of other locations and just how fast and energetic the riders were. Pace cars marked the start and end of the riders – they were not residents joy-riding!  Auxiliary police were in evidence ensuring the safety of spectators.

Some residents were concerned that the Farmers’ market would be disrupted but apart from limited access from the West along Albert, it seemed to be operating as usual.

The winners of races were treated to recognition with awards although potential prize money of $1000 was donated to a local charity instead of being split into small amounts for each winner.  Councillor Brian Darling represented the Town in making the awards.

Organizers hoped that this event can be called the “First Annual” Criterium race in Cobourg. 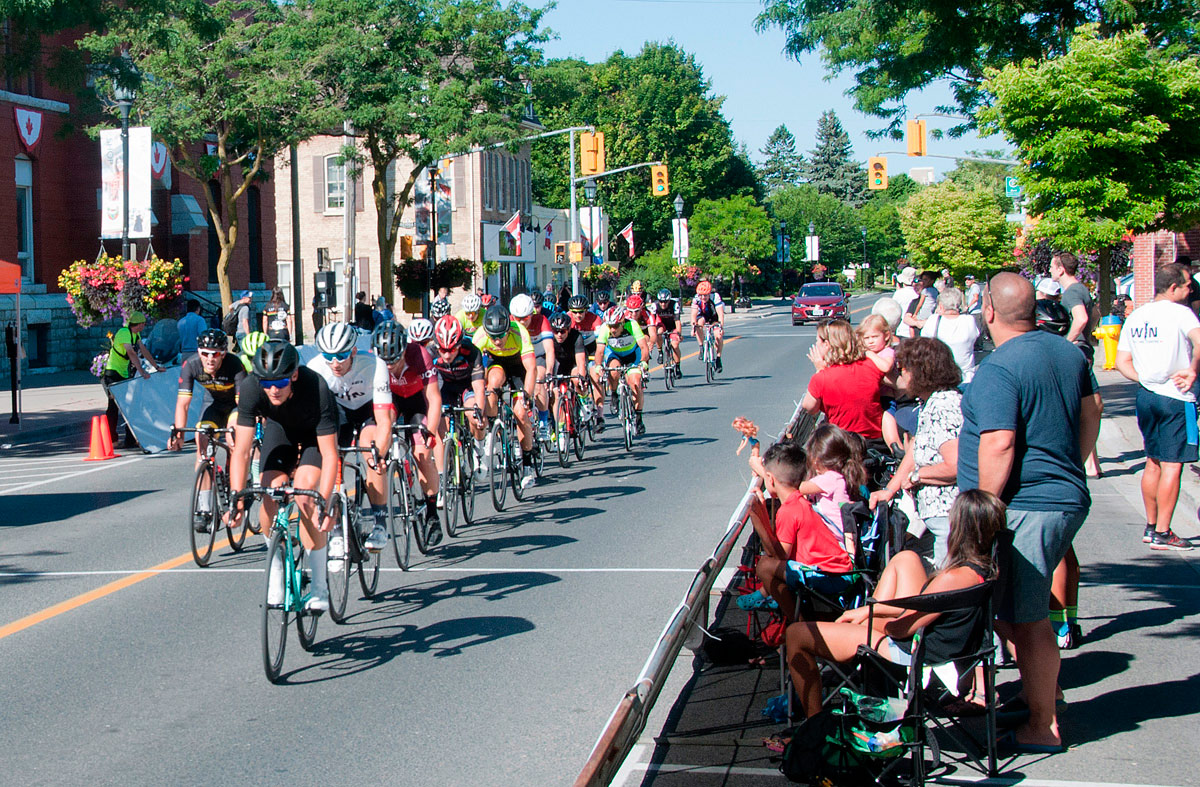 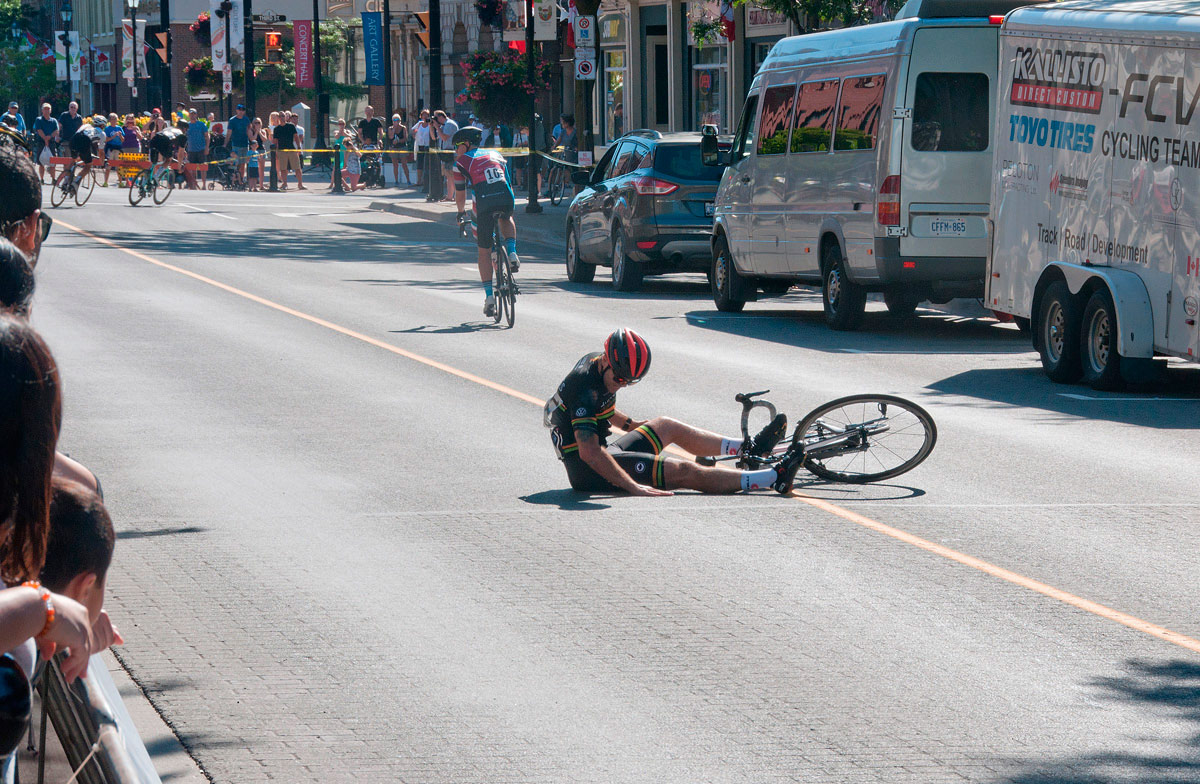 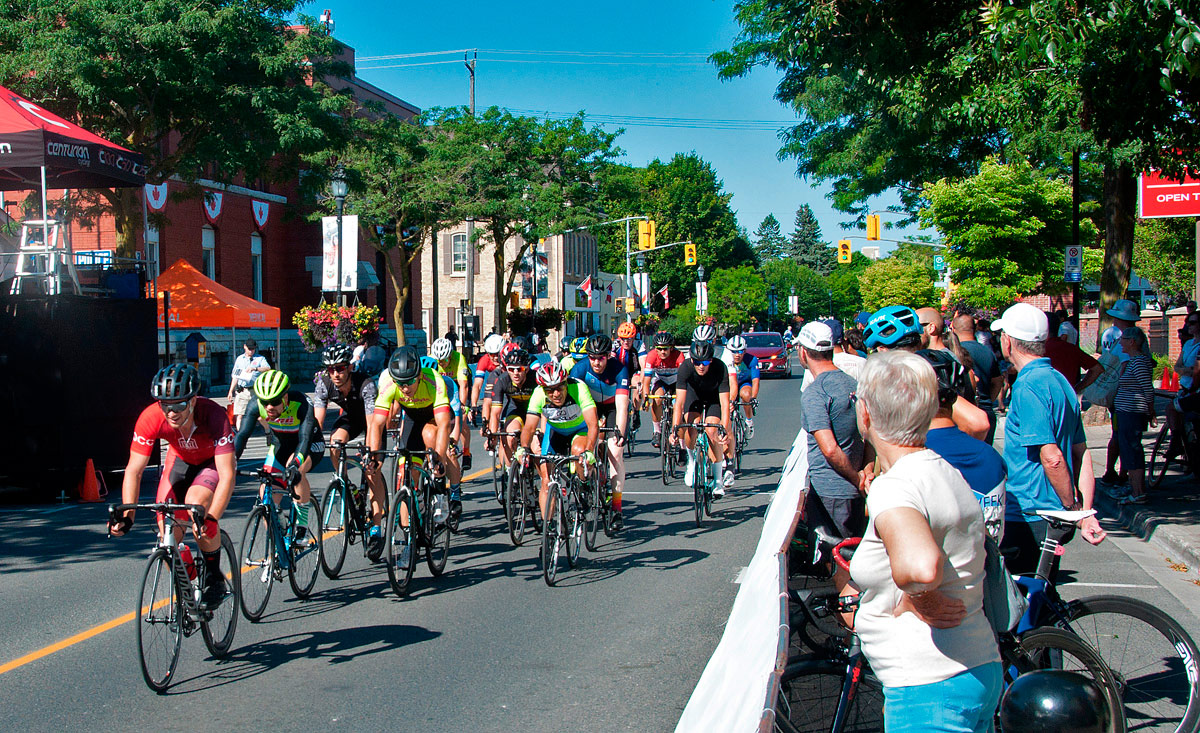 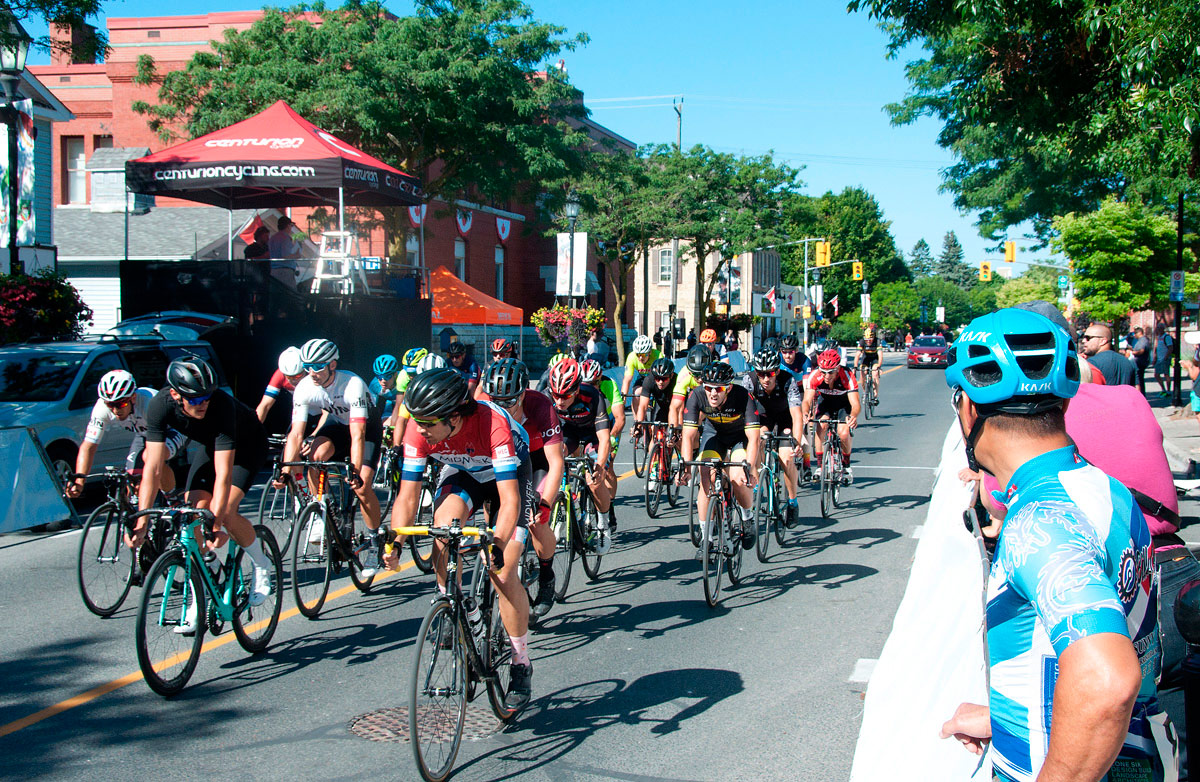 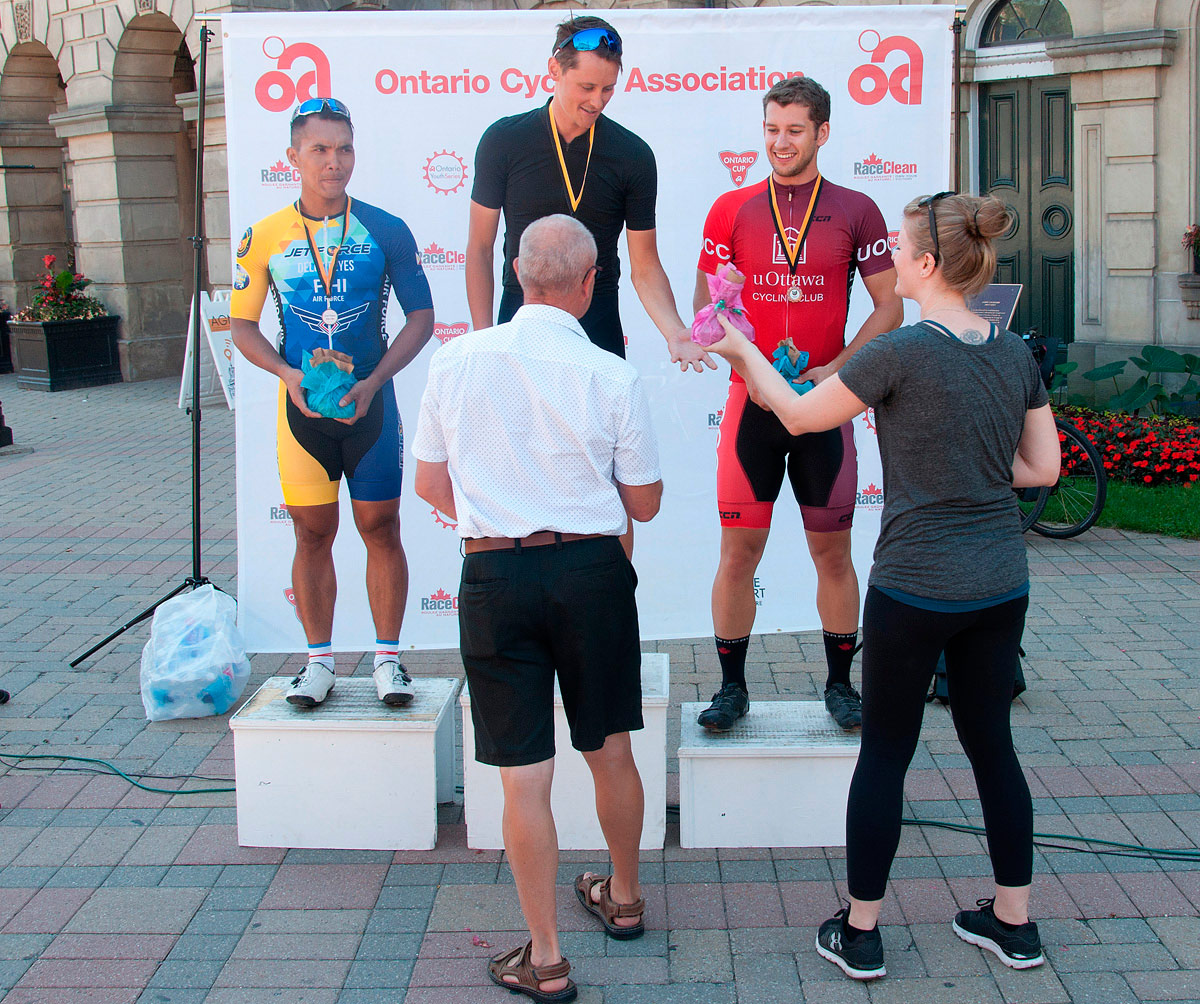 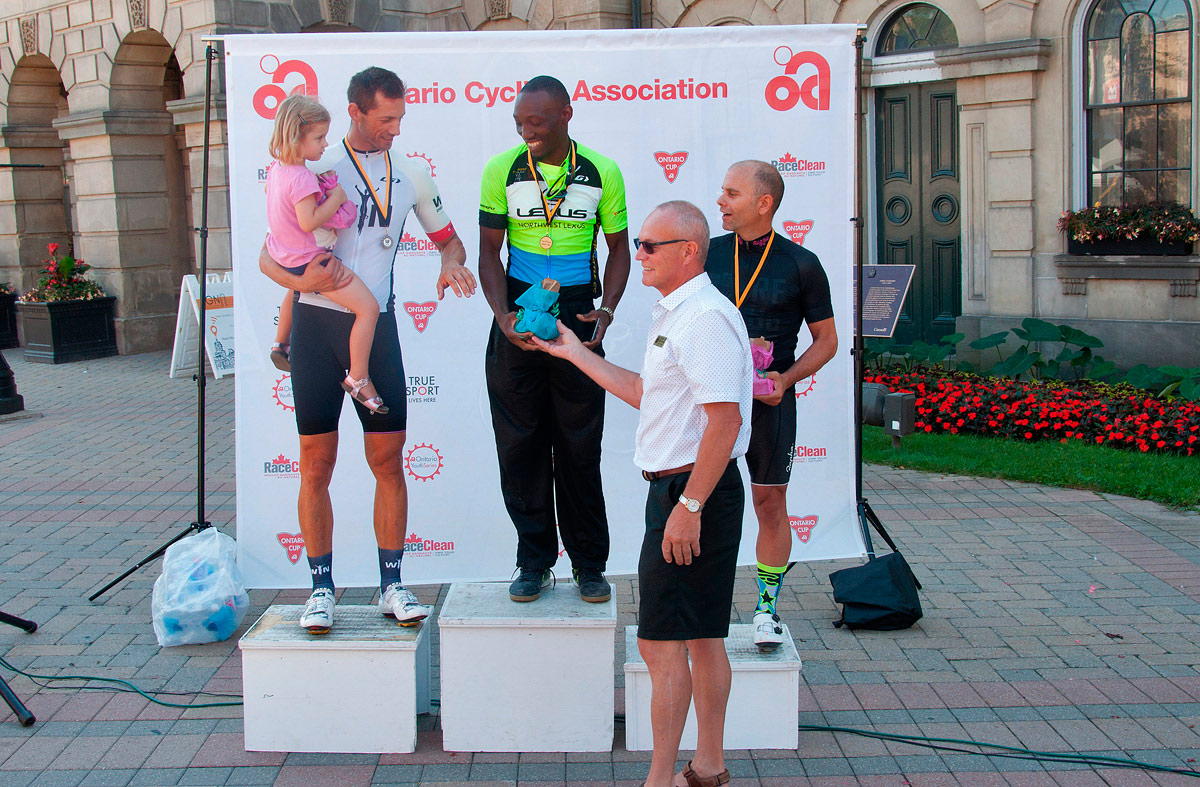 Hey, great article and pics! Just wondering where I might be able to get a few more pics. I was in the e4 race so pics from that race would be great!

I’ll be sending out a link tomorrow with a link to pic’s that you can purchase but a buddy of mine took some awesome ones! http://www.redcanoeimages.ca/cobourg-gran-prix-august-2018/

Hope it is the “First Annual Indeed”!

What an exciting event to watch and photograph! Many members of The Northumberland Photgraphy Club were down there during the day. I was there at two different times and loved it. The coffee shops were packed and the patios seemed to be doing a good trade. I did hear from some folk, even members of our own local bike club, that they had no idea this event was being held. Perhaps we need to look at how we advertise events. I saw posters in store windows and I caught the event about a month ago on “Facebook events”. Well done Cobourg!

A great event to watch and photograph, I agree. I watched some racing downtown while there for another appointment. Made it to the Farmers Market as well. In the afternoon, I rode my bicycle along much of the detour route for drivers and all seemed to be working well. I stopped to watch more racing and to take pictures at King West and Bagot Streets. From here, an iconic view east along King towards the clock tower of Victoria Hall with the racers moving around the corner.
I look forward to hearing about event operations and what if any changes would be needed for next time. And, the weather was perfect.

Thank you for the positive feedback about the race, it was a pleasure bringing it to Cobourg for the first time! I’d love to know which cycling club you belong to, I reached out a number of times to all three of the clubs here is Cobourg about this event as well as the Road Race which I ran back in May up in Baltimore. I had a few people from the Cobourg Cycling Club helping out but didn’t get any uptake from Northumberland CC or Ganaraska CC.

Thanks again for coming out to support this event, I’m glad you enjoyed taking in the sights!

Great fun, come again. Btw, when will we be able to see any of the GoPro vids taken by the bicyclists?

There should be a few posted shortly however he is one of the crash in the Elite 1/2 Men’s race -https://www.youtube.com/watch?v=0Ep6nKR5BiY

Here is a GoPro video from the Elite 1/2 Mens race – https://youtu.be/HXguwFpGmzk

Looks Goooood. Like the view of Victoria Hall as they come down King Street.– but needs some colourful flashing down that stretch, especially to identify C O B O U R G. See ya next year.

My husband belongs to Northumberland CC. He ran into a few of his fellow members down at the event who said they were downtown for another reason and were happy to see the bike race but had no idea it was going on! Maybe my husband needs to have a little “chat” with the President of his cycle club!

Elaine
I think there were others who weren’t aware of the Criterium Grand Prix – or weren’t sure what it was. This was a first for Cobourg and I found it incredibly exciting and really well run. What a great way to showcase Downtown Cobourg and its merchants. Hopefully next year’s event will draw more sponsorship so tbe organizers can market the event more broadly.