There were about 250 people at the CCC today to greet Doug Ford on a campaign visit to Cobourg.  His team and the team of local PC Candidate David Piccini were there to smooth the way and Doug delivered one of his signature speeches (more below).  Not to let Doug go unchallenged, immediately after the event, Liberal Candidate Lou Rinaldi issued a rebuttal in a Press Release (download at link below).  Doug spoke to the mostly supportive crowd about the waste and debt of the Kathleen Wynn Government and made a point in highlighting the high salary of the CEO of Hydro one.  Doug said that although CEOs of Hydro entities in other Provinces had salaries around $450K to $500K, Ontario’s equivalent was paid $4.5M in 2017.  He said that this was not on the Sunshine list because Wynn said that it should be not shown.  He declared that on June 7, the Hydro CEO “would not be there”.

He said that Kathleen Wynn does not care about people but that he would listen to the people and put money back in their pockets. He also said that NDP and Liberal voters were moving to support him and as an example, one ex-Liberal voter told him:  “we know you have our back”.  He said that Wynn thinks that people work for her whereas Doug says the reverse – he works for the people.

He said that nurses are the backbone of hospitals and that frontline workers like nurses and doctors know how best to run hospitals, not politicians, and that he would listen to them and provide help (resources).   “No-one knows better than the front-line!”  He said the same is true for teachers – they are not being listened to.

His speech was relatively short and the reception was warm  See the photos below. 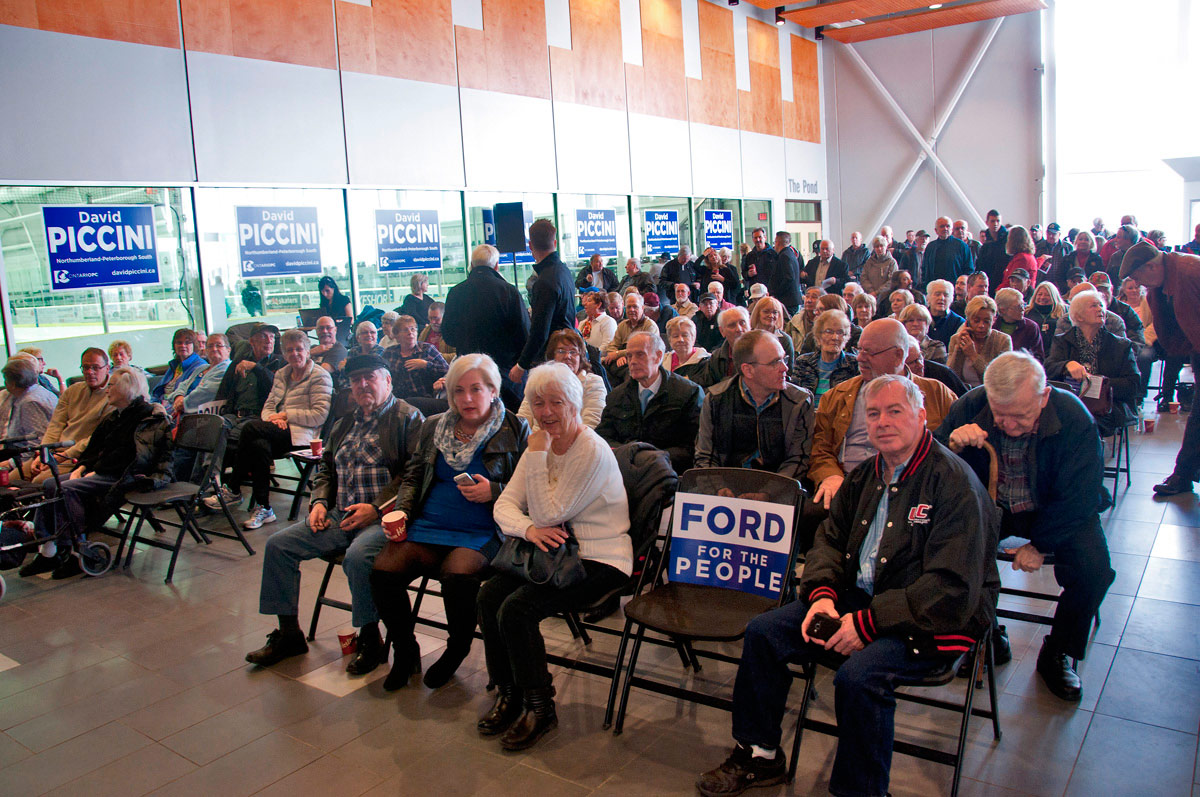 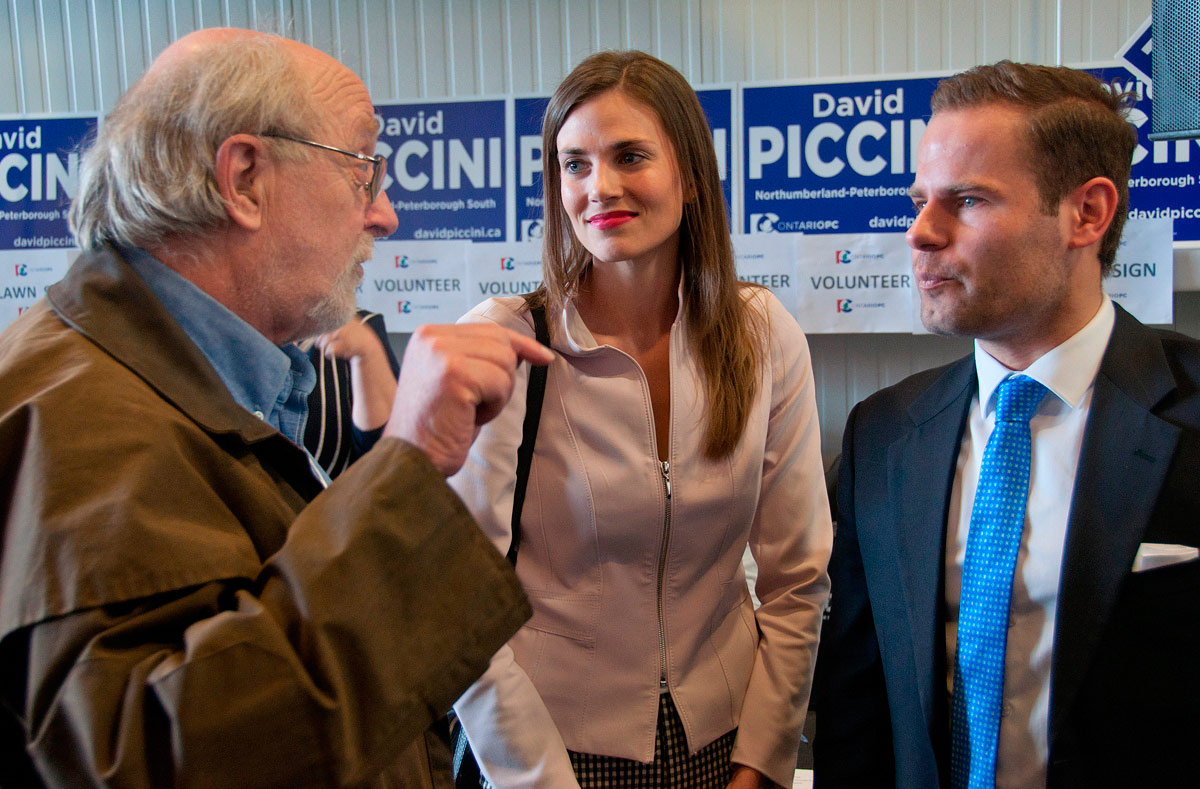 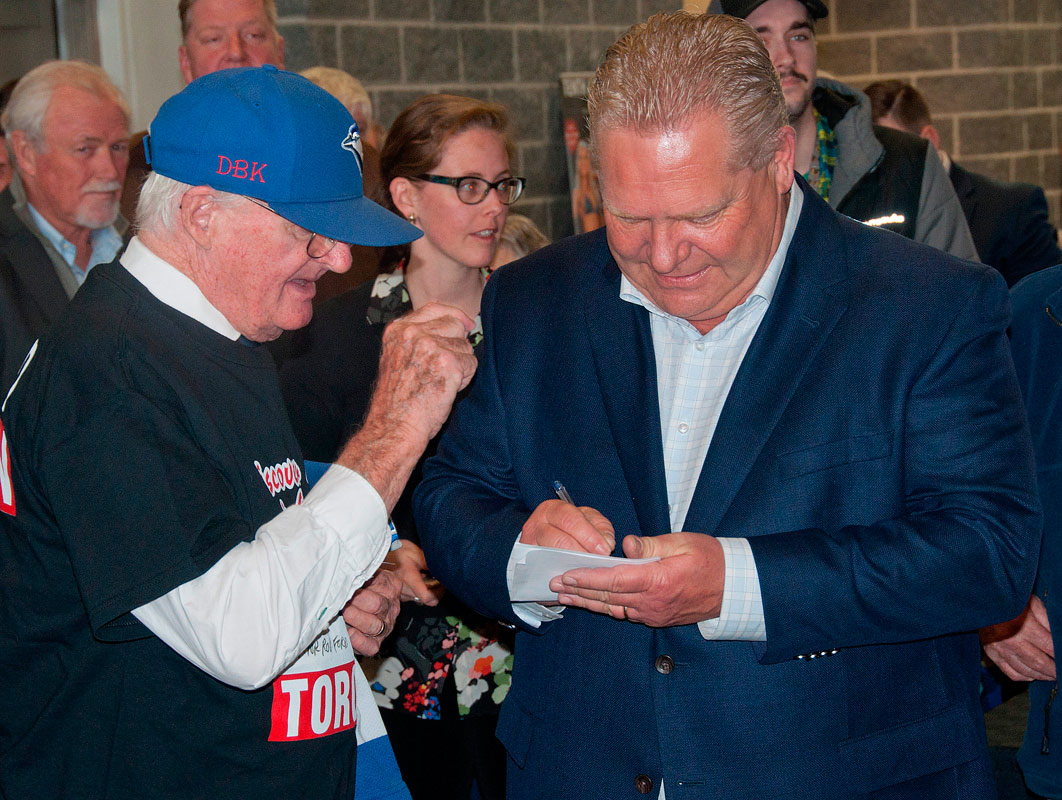 Doug Ford giving an autograph to a fan 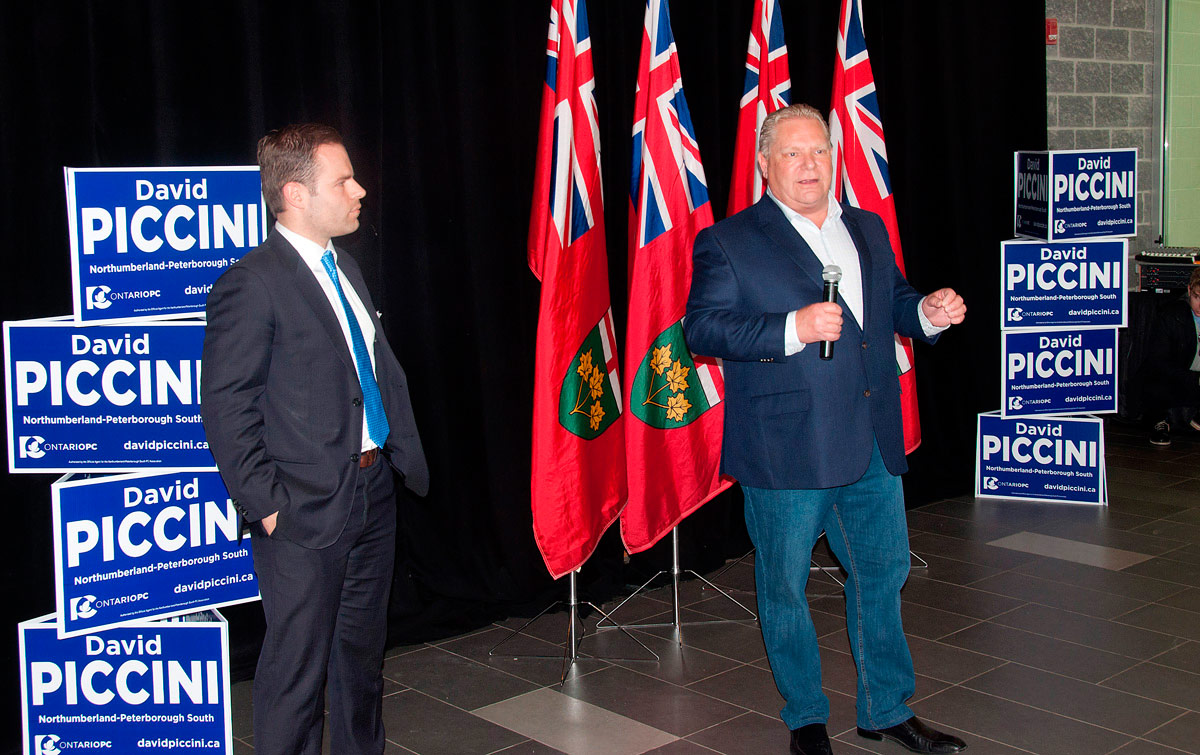 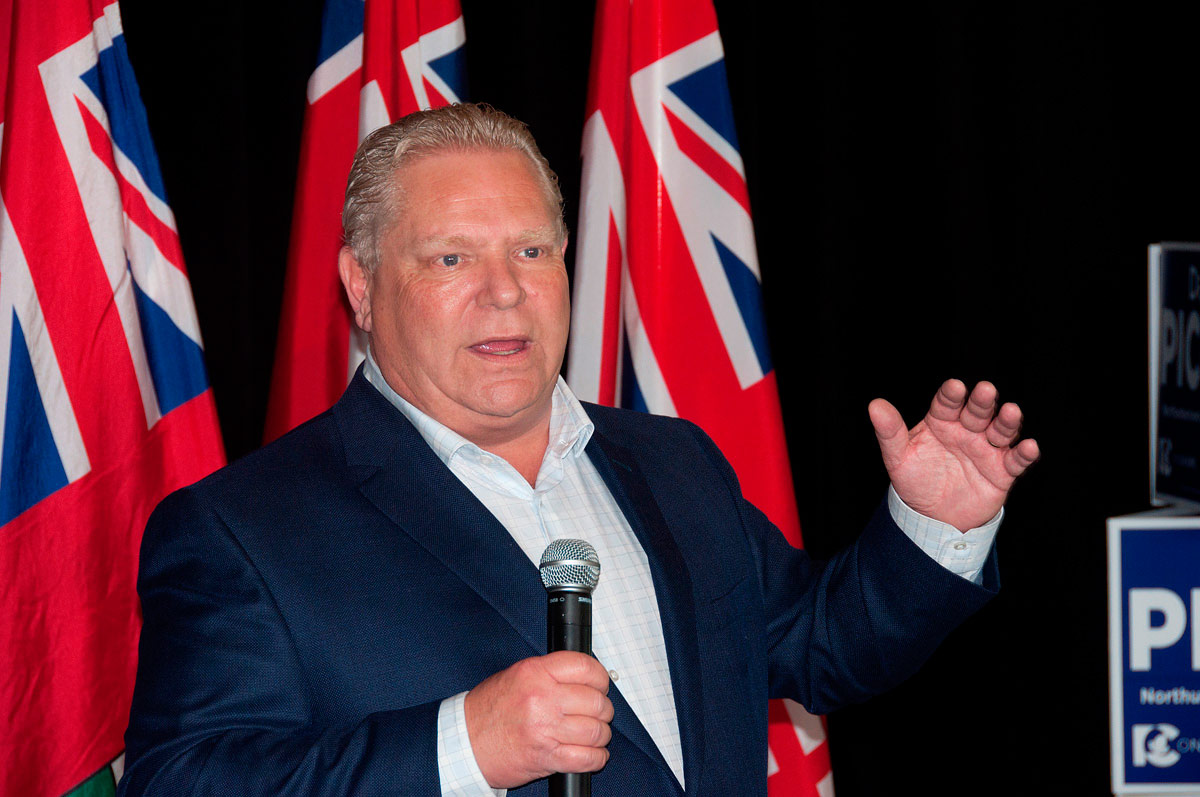 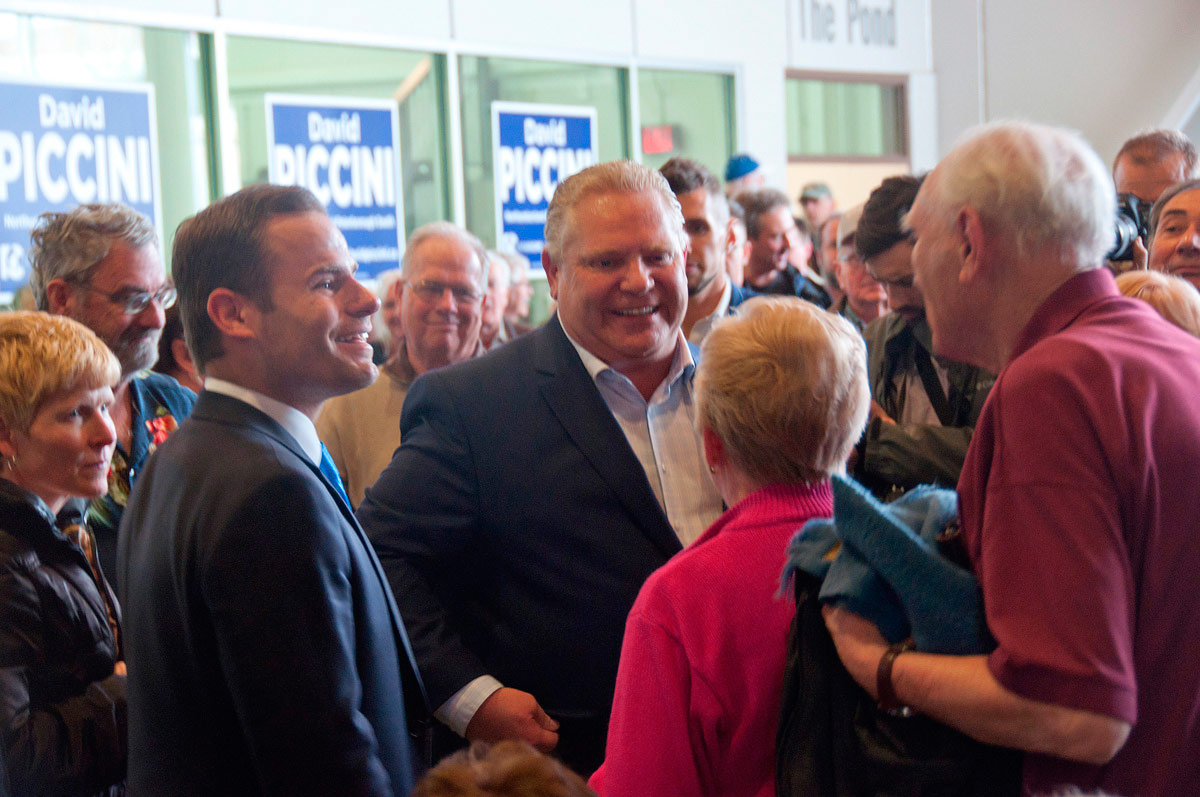 While I am not a fan of Doug Ford.. I am a huge fan of David Piccini and think he will do a wonderful job for the riding. Plus… it is time for the Liberals to go….

Anything that gets rid of Lyin’ Lou; is a good thing!

Ford will have a very difficult uphill task ahead in his humiliating Canada to outdo Trudeau internationally and Wynne in Ontario performances in full flow..
” People kind” everywhere are now aware of this present farce that has to be ended.

Can’t wait to see the Ford family back on the U.S. political satire shows. They humiliated our country once and if this Ford gets in they will do it again. He doesn’t even have an understanding of Provincial and Federal rules. What a moron. Next he’ll be saying “sad” and “fake news”. If you believe the bull he is spewing you’re not much better. His whole campaign is riding on Winn’s unpopularity.

Apparently not all “Canaduans” are all that smart.
Not real smart like those “Winn” supporters.

Doug Ford is morally corrupt. Have you all forgotten about his role in the Rob Ford saga? He was complicit at best, and the mastermind behind it all at worst. Putting money in our pocket is at the expense of the social security net we need. Don’t you see what’s happening down south with Trump? We can’t have someone as a leader who doesn’t understand the nuances of the political system. Sure the idea of an ‘everyman’ leading is appealing but think that through. Ford was boasting the other day that he will fire the the CEO of Hydro, which he would absolutely not have the authority to do. He does not know how the system works. I’m more scared of that than I am of high hydro rates (which by the way, we in Cobourg have amongst the lowest rates in the province, as we are not serviced by Hydro One).

Ahh politicians!
Mr. Ford promised to “put money back” in my pockets.
But I want to see the money BEFORE I vote.
Mr. Rinaldi is “very worried” that Mr. Ford came to Cobourg to make a list of facilities he will close down, when in power.
Do grow up, both of you!

I was at the CCC yesterday to see what the PCs leader had to say, firstly there was definitely more that 250 people in attendance, just in the seating area alone there were +120 people and more that twice that many were standing, my estimate is that the turn out was much closer to 400 people who turned out to see Doug Ford. Cobourg gave him a warm respectful welcome and cheered / applauded to his general platform points. His political points were light on specifics, but based upon the track record of the past 14 years of Liberal government, massive debt, court cases, fiscal mismanagement, arrogance in leadership, selling a key provincial asset like Ont Hydro, breaking their own accounting rules to try to balance the budget, etc., it is a very long list. It is definitely long over due for a change, the Liberals will only give us the same results, we need a new direction, I think the PCs will put some sensibility into Ontario’s government. They have my vote.

Focusing on the size of the crowd is so Trump-like. We don’t need this kind of trash coming to Canada.

Yes. Better to focus on the size of the Provincial debt that has ballooned under the Liberals.

I attended the Doug Ford visit to the CCC; it was nice to hear a politician unfiltered. He certainly sounds like an “everyday” Ontarian and delivered a well received stump speech.
I wish our MPP Press Release would have addressed the 4 main issues (as I heard) Mr. Ford raised, i.e., why do we continue to have long wait times in our emergency rooms, why don’t we have local
control of our hospitals, we do we have to pay those enormous interests rates on our amazing debt, why was Hydro privatized (that enables the CEO of Hydro to avoid the Sunshine List)?
Our MPP has done a great job for the communities in this riding.
And I am thankful for that.

“Sounds like” is operative. He is an elite millionaire from a wealthy family.

Do you think cut a slash PCs are going to help hospitals? The tough talk buys votes from the gullible, that is all.

So Mr Ford raised these points but what solutions did he offer. For instance how is he going to reduce wait times without increasing the health budget, if he increases the health budget where will the money come from?

Eastender, local control of hospitals would probably mean that you would pay for that with more taxes……
We are lucky in Cobourg that we didn’t lose control/sell off our utilities.
Ford will be an embarrassment to our province, and set us back years.
He is a big business owner and not just a regular guy.

I can’t wait till Ford “takes back Ontario!”, he will respect my money as I’m a “hard-working taxpayer!”, let’s “kick everyone to the curb!”.

What a joke but that is all it takes to win over your typical Conservative. Meaningless tough talk with lies sprinkled in. See Donald Trump.

Bill sounds like you are just as likely to continue to buy in and believe the meaningless and endless BS that falls out of the hole in Kathleen Wynn’s face…unless you’re a supporter of the NDP #irrelevant. Oh wait, the Green Party perhaps – better to spoil your ballot. Our “keep in beautiful” Province is in ruins and long down the path towards financial disaster and the Liberals as solely responsible for the mess. Moreover they are doubling down writing election promise cheque without the ability to pay. While I’m not a huge fan of Doug Ford’s, I preferred Christine Elliott but did not like Patrick Brown at all, this is an anyone but Wynn campaign – to that end Doug is the man.

The Trump rhetoric is boring you’ll need to up your game….

The Ford style, Trump-light if you’re paying attention, makes a lot of people “go anyone but Ford ” in fact. Seeing serious PC supporters turtle for him is concerning. Elliot was a shoe-in, not so Doug Ford.

The irony using the name Bill Clinton to make comments about a politician making “meaningless talk with lies sprinkled in “won’t be be lost on anyone I’m sure !

The real reason that Hydro One’s CEO’s name is no longer on the Sunshine List is because it is no longer a public sector organization, it was privatized and shares are available for public trading. Not a whim of Kathleen Wynne, not at all. Ford’s statement was either a lie or a mistake (not that Ford’s supporters care about the truth).

Dubious: Hint: it’s because they are not public companies.

Hydro One is a public company. It trades on the TSE under the symbol “H”.

I believe James was referring to Lakefront not being a public company, therefore salaries above $100,000 are not disclosed on the Sunshine List.

You hinted that there is a different explanation. Please elaborate!

Since James wrote “companies” (note the plural) I rather doubt that was his reasoning.

Consider that 99.99% of Lakefront is owned by Cobourg and 0.01% is owned by Cramahe. That is the vast majority of the ownership is by the RESIDENTS of Cobourg yet their board wants to keep things secret from the owners. For extra points, what prominent local politician is Chairman of the Board of Lakefront Utilities and insists that the salaries remain secret?

It must be fun to think everything is a conspiracy, Dubious, but sadly I think the truth is often much more boring.

For extra points, the Chairman of Lakefront Utilities is Barry Gutteridge.

The mayor is the Chairman of Town of Cobourg Holdings Inc. Do you realize there is a difference between Holdco and Lakefront Utilities? Don’t feel bad, the CTA often confuses the two and they are experts!