At the first meeting of the new Northumberland County Council on December 12, newly elected Mayors will be on board.  As well as Cobourg’s John Henderson, others on Council will be: William Cane (Hamilton – new),  Robert Crate (Trent Hills), John Logel (Alnwick-Haldimand), Mandy Martin (Cramahe – new), Brian Ostrander (Brighton – new), Robert Sanderson (Port Hope).  They will be asked to receive the budget for 2019 including the county’s levy increase – that’s a polite name for tax increase.  In addition to the 2019 budget, they will also see a 10 year Financial plan showing expected budgets to 2028.  The next County Council meeting will be on January 30 and it’s expected to get approved then – that’s months ahead of Cobourg.  As well as the budget, another significant change will be to reduce the “weight” of votes by Hamilton.

As long as nothing major changes, the County’s tax increase for 2019 through 2018 will be 2.5% + 0.27%.  The add-on was decided a couple of years back and provides for a catchup on infrastructure spending.  The 2.5% covers inflation.  The long explanation (see links below) speaks to some years of volatility when costs were downloaded from the Province but that there should be stability in future.

The County attempted to get the public interested with public budget meetings in June but attendance and participation were pathetic. That’s my description – CFO Glenn Dees called it “very limited”.  Five came to the open house and one completed the online survey.

Glenn says that debt is limited because it’s only used for major one-time projects such as the Bridge in Campbellford and the Golden Plough Lodge rebuild.  Otherwise Capital comes from revenue.  Most Capital expenditure is on roads (59%) with number two being waste (14%).

Below are a couple of graphics that show where the revenue comes from – only half comes from direct taxes – and where it is spent.  Wages look high but that’s because “many services provided by the County are labour intensive such as long term care and paramedics”. 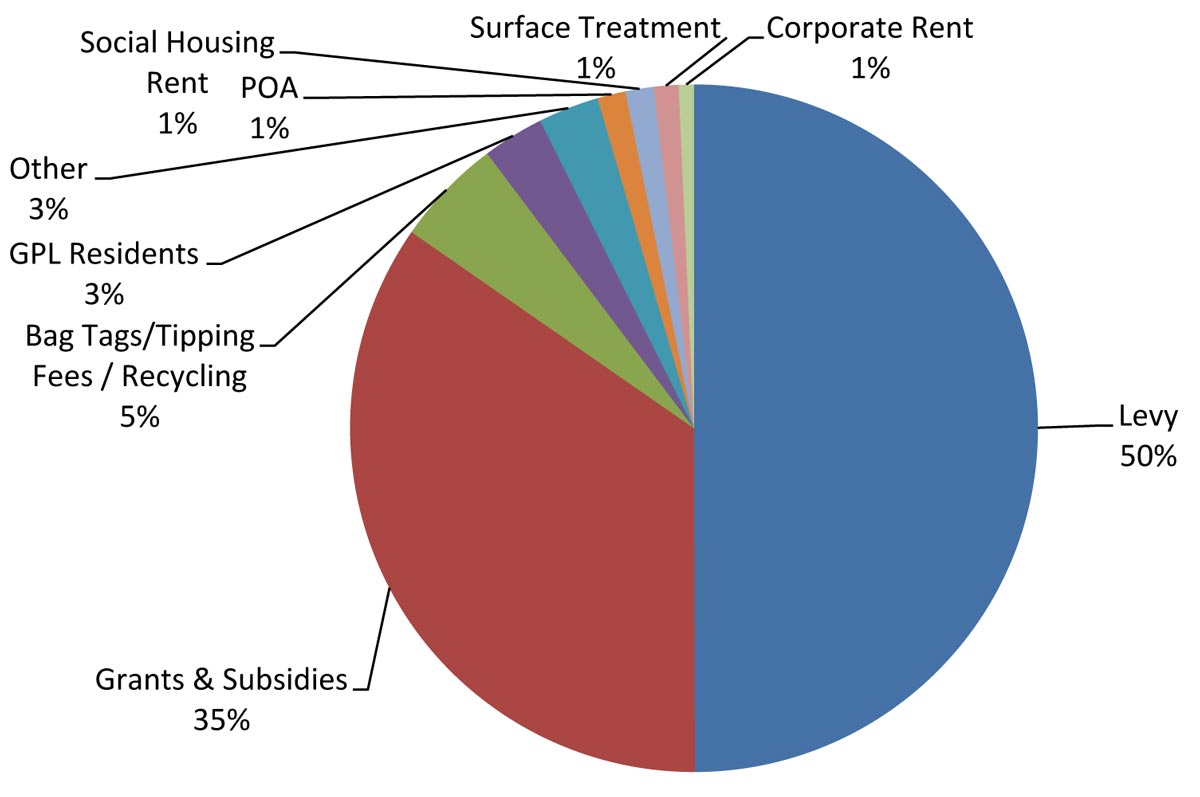 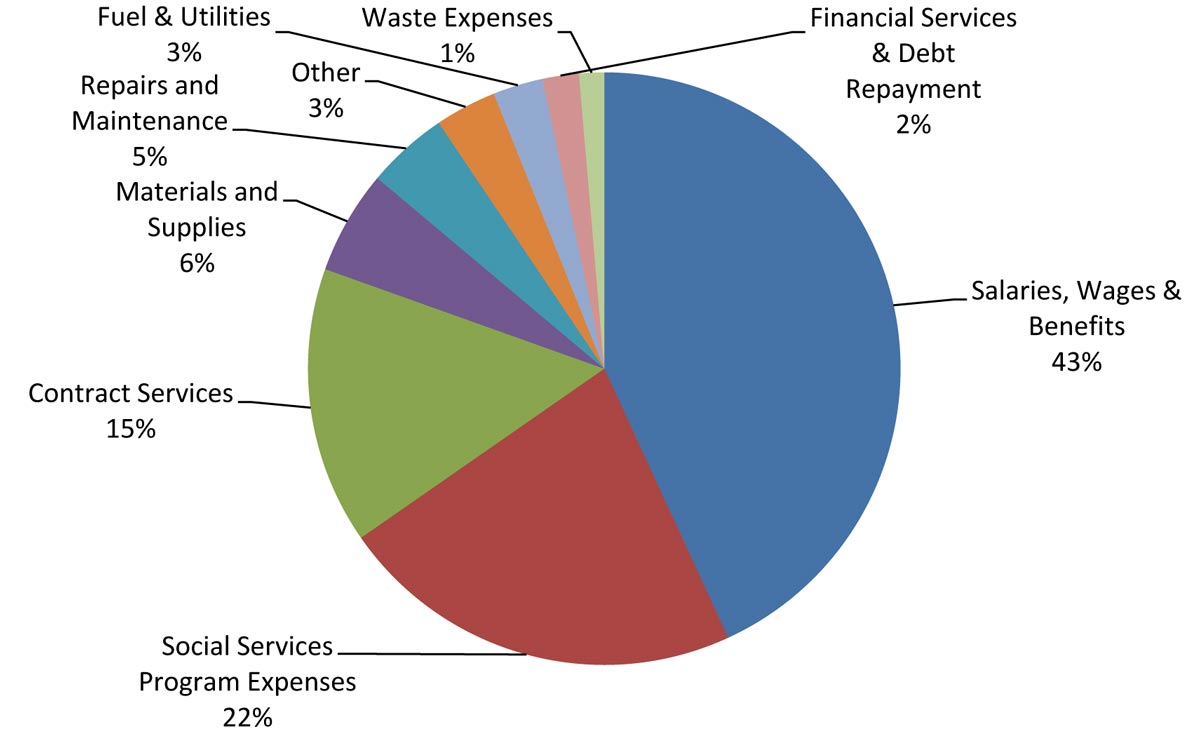 Most people probably don’t know that voting at County Council meetings is structured to give more weight to the larger municipalities.  It’s only in effect for recorded votes which are generally used for significant or contentious decisions.  As the smallest municipality, Cramahe gets 2 votes and the others get more based on their population in the most recent census.  Subject to a vote of approval, the votes allocated to Hamilton will be reduced from 4 to 3 because of shifts in population – see the following table.

I learned today that our new Mayor, John Henderson, has been appointed to the Board of Northumberland County Housing Corporation. This is his opportunity to bring his stated commitment to advocate for affordable housing into concrete action. Congratulations and hope are in order, along with our best wishes.

“The County attempted to get the public interested with public budget meetings in June but attendance and participation were pathetic.”
Chuckles.
Obviously there needs to be a Northumberland County Taxpayers Association to stir things up a bit.
There must be a County Holdco or stuff like that.
What about the annual reports of the Golden Plough and the Material Recovery Facility?
Needs looking into, no?

At one point the CTA said it was planning to fix it’s gaze on County Council but I guess it was too much work, not another peep since.

Now if I had my way we’d have an anti-CTA to urge Council to get to work on the overwhelming need to build affordable housing. It’s their job and past time of just talking about it – we need action. With both Cobourg and Port Hope mayors indicating they want to see it, maybe we can press the County to act.

Totally agree on the need for affordable public housing.
And given Cobourg’s large Seniors demographic, we need spacious low rise apartment rentals to induce our Seniors to downsize from single family dwellings.

Why would inducing seniors from their single family homes be of any importance in Cobourg?

Many Seniors get tired of the responsibilities of home ownership, but are not ready for a retirement residence like Legion Village.
Renting an apartment is an intermediate step.
This would free up single family homes for young families and ’empty nesters’ from the GTA.

Who/m is the ‘we’ in “maybe we can press the County to act”? Your lack of empathy for a volunteer organization suggests that you then will be leading the charge on this file (affordable housing), you have more time and a better way forward. Love to see/hear about it.

Our Affordable Housing committee is leading that charge. With the local heavy hitters from the Health Unit, Habitat, and Green Wood Coalition among their membership they have been working on it for a long time. They’ve done presentations to municipalities and organized All Candidates debates around the county during the recent elections. In fact this issue is exactly why the Committee exists and they’re the experts. I’m just a supporter of the cause.

The chair of that committee is Kristina Nairn from the Health Unit, whose pitch for advocacy is linked below. I’m gratified to see it since I’ve been saying that very thing for almost thirty years now.

Why would Ms OConnor feel empathy for your ‘volunteer organization’ whose anonymous members, like you, pile up on her in down-voting her posts.