With interest rates rising, there has been a lot of talk that homes would be less affordable so prices would go down – but that has not happened, at least not yet.  Instead they are fairly steady in both Toronto and Cobourg.  In my last report in September, average house prices in August were around $480K and now they are nearer $430k although still higher than mid-year 2017.  But prices vary tremendously depending on location and other features.  The backlog (or to put it in realtor terms “inventory”) is larger which probably means some houses are not selling because they are overpriced – if a house is taking too long to sell, it seems to me that few people want to buy it – or maybe no-one.

At the bottom of this article is a graph showing prices and here is a snapshot of Real Estate activity for residential units in West Northumberland in November 2018:

Council has approved several developments over the past year but these of course are new houses so do not show in the Real Estate inventory compiled by the Northumberland Hills Association of Realtors.

And if you are thinking of renting instead of buying, CMHC reports the vacancy rate in Cobourg was 0.3% in October 2018 although they are not very confident of that number.

Toronto prices are shown for comparison – because they do influence prices in Cobourg. 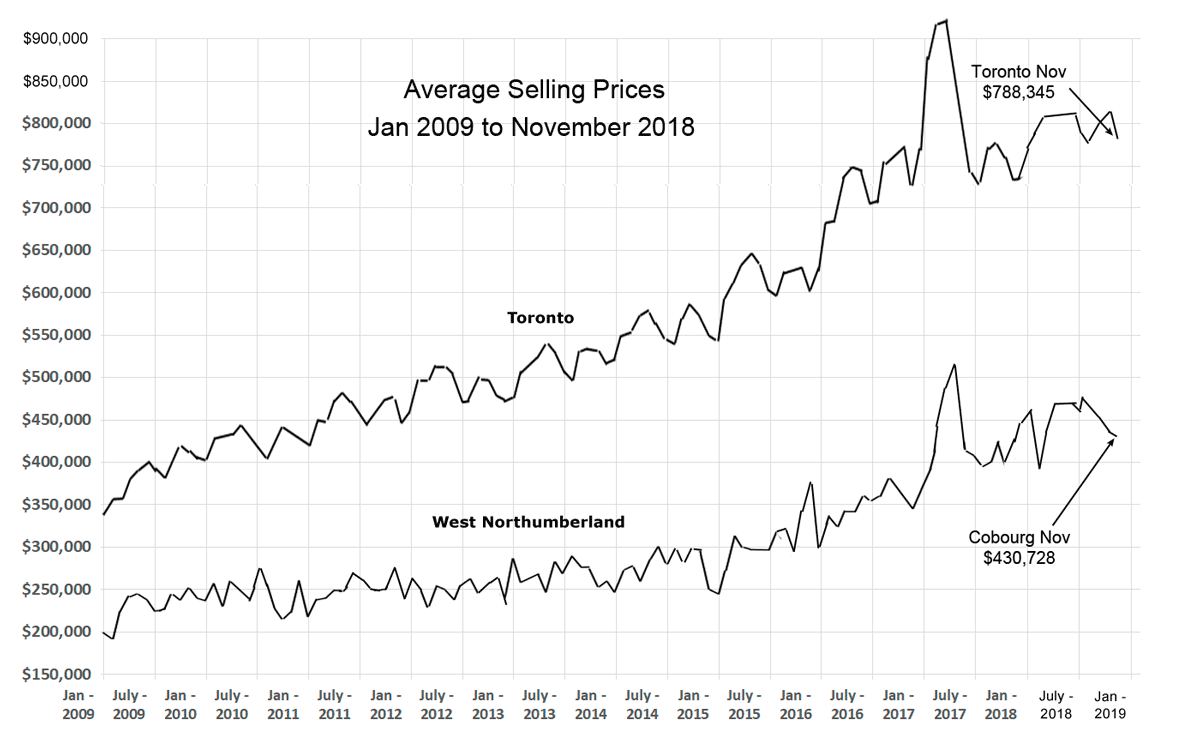 Of course there are a number of news items and commentators covering house prices but they talk of National and Toronto prices.  Here is a summary of one:

Toronto new home prices fell at the fastest pace in more than two decades in October, further evidence that tighter mortgage lending has slowed a boom in Canada’s biggest city.

Statistics Canada’s price index for new Toronto homes fell 1.4 percent in October from a year earlier, the most since September 1996. Across the country, the price increase of 0.1 percent was the slowest since 2010.

On a monthly basis, new home prices were unchanged in October from September. The index includes single-family, semi- detached and row houses, but doesn’t capture condominiums that have become more popular in Toronto in recent years.

And another one (summarized).

Toronto and Vancouver most vulnerable to interest rate hikes

TORONTO — Canadians living in two of the country’s largest cities may find themselves more “vulnerable” to interest rate increases as personal debt levels in Toronto and Vancouver continue to hit record-levels, warns a report by Canada Mortgage Housing Corp.

The housing agency says the debt-to-income (DTI) ratio for those living in Vancouver climbed to 242 per cent in the second quarter, which ended June 30. That means that for every $1 of disposable income, $2.42 is owed. It was similarly high in Toronto, where the DTI is at 208 per cent. This is the highest ratio recorded for both cities for any second quarter since 2015. Nationally, the DTI ratio is 171 per cent.

A major contributor to increasing levels of indebtedness is mortgage debt, which accounts for two-thirds of all outstanding household debt in Canada. “While households may be able to service their debt during periods of low interest rates, some may face challenges when rates rise,” CMHC said in their report. “Highly indebted households have usually few debt consolidation options to respond to increasing debt service costs.”

“The increased debt payment burden may come at the cost of reduced consumption, decreased savings or opting to make lower repayments on the principal,” it warned. “Some households might even default on their loans if their incomes are not sufficient to cover higher expenses and credit charges.”

CMHC says this could lead to a ripple effect if households begin defaulting on their loans, and banks begin scaling back on the loans they give out.

This reporting plus the ongoing increases in interest rates may well mean prices drop or at least stay flat for some years.

15 Dec 2018 – 2:20pm. This post has been heavily edited to remove reference to an existing house for sale. It seems that my attempt to question whether a particular house was overpriced was not taken the way I intended and offended the owner and some others. This distracts from the main intent of the post which is to discuss trends of house prices in Cobourg. Comments relating to this portion of the post have also been deleted. My apologies to anyone offended.

Thanks so much for this info John.

an AACI friend of mine was telling me last wk that there was a hug increase in reverse mortgage application & requests and a large percentage of his business in the region was now dealing with the aspects of retirees trying to stay in their homes as long as they could. It appears from his comments many of them had simply underestimated the inflation rate and escalation of costs of taxes goods & services as they grew older in short out living their savings by 75 he said yet most were still very active and health. He also indicated that the preferred home to purchase was new ,turn key a 1 level 2 bed rm and a garage or sizable area storage Not a 2 or 3 story . It was also stressed that the increase in borrowing cost / interest meant that the seniors ability to borrow against what equity they had left was being reduced as well .
It was also noted that many of our local residents were moving out and being replaced by the Torontonians
Sad really !

Once Toronto house prices flatten out for a year, more GTA boomers will feel the time is right to move to towns like Cobourg and Port Hope. Especially if they fear additional increases in the prime rate will decrease their house values.