The annual Mayor’s Levee is a chance to meet the Mayor and Councillors and for the Mayor to report on the year past and the year just started.  There were no surprises although it was a feel-good event.  All councillors except Forrest Rowden were there as were two previous Mayors (Joan Chalovich and Peter Delanty) and M.P.P. Lou Rinaldi.  Town Crier Mandy Robinson wrote a cry but couldn’t deliver it because of a case of flu – instead Poet Laureate Ted Amsden read it out as well as his usual poem.  There were a few snippets to be learned and Mayor Gil Brocanier highlighted major achievements from 2017 and some of the planned 2018 projects. He was also wearing a kilt that used the newly designed Cobourg Tartan; in his speech he alluded to what is worn under a kilt. You had to be there.

Gil read out a list of the accomplishments of each Department but since these were mostly reported on this blog during the year, I won’t repeat them here.  One snippet was that there were 10 new bus shelters added during the year – the Town generally only budgets for two per year but in 2017 received a Federal grant to add more.

The major project in 2017 was the Waterfront Study and one comment by the Mayor was noteworthy.  He reported that the survey done on that project had 2000 responses and the consultant said that they had not seen this level of engagement before. [During the year I suggested to Director Dean Hustwick that this was because Trailer Park supporters had actively enlisted friends to respond to support their position but my suggestion was dismissed.  Sorry to intrude an opinion – in this case I can’t resist.]  More on this in the next item.

There was also what I would call a celebration of the Town’s celebration of Canada’s 150th birthday.  The committee was co-chaired by Nicole Beatty and Peter Delanty who both spoke about the effort and thanked those who contributed.  The events were recorded in photographs taken by the Northumberland Photography club – these were displayed in a slide show for all to see. It’s planned to put this on the Town’s web site in the near future.

There was also a ceremonial final addition to the Time Capsule.  A now redundant Mayoral chain of office was added.  The time capsule will be sealed in a ceremony in the spring; it will go into a vault under the Floral Clock to be opened 50 years from now.

The Concert Band of Cobourg supplied musical entertainment although with a smaller group than previously – I understand this was to keep them a bit quieter so people could chat. Refreshments were supplied to all attending – one highlight (for me anyway) was the Christmas fruit cake supplied by Weston Bakery.  The photos below give an idea of the event.  It seemed that despite the frigid weather, attendance was higher than usual. 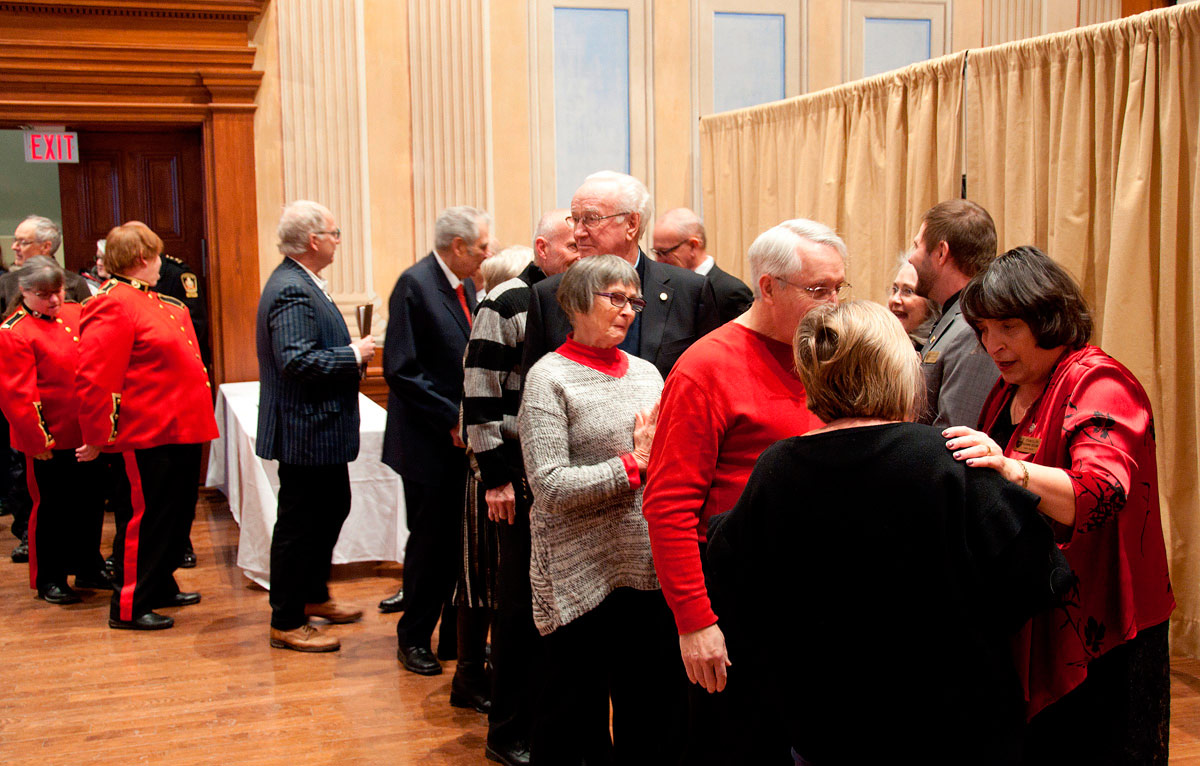 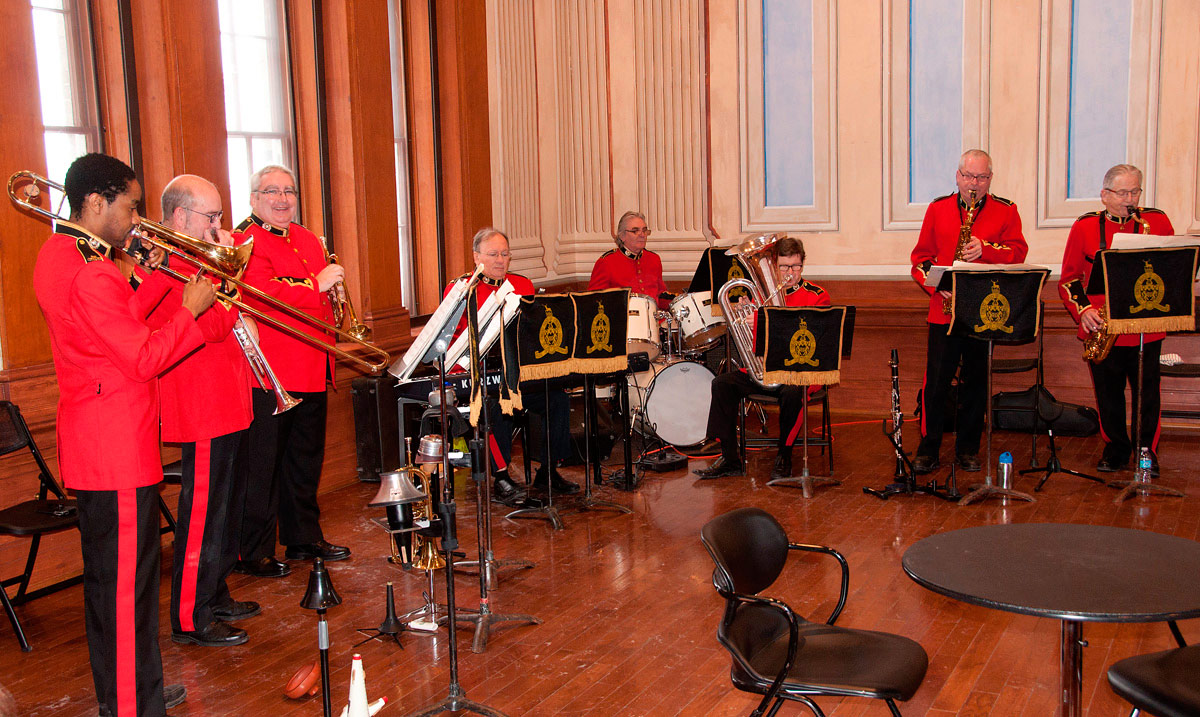 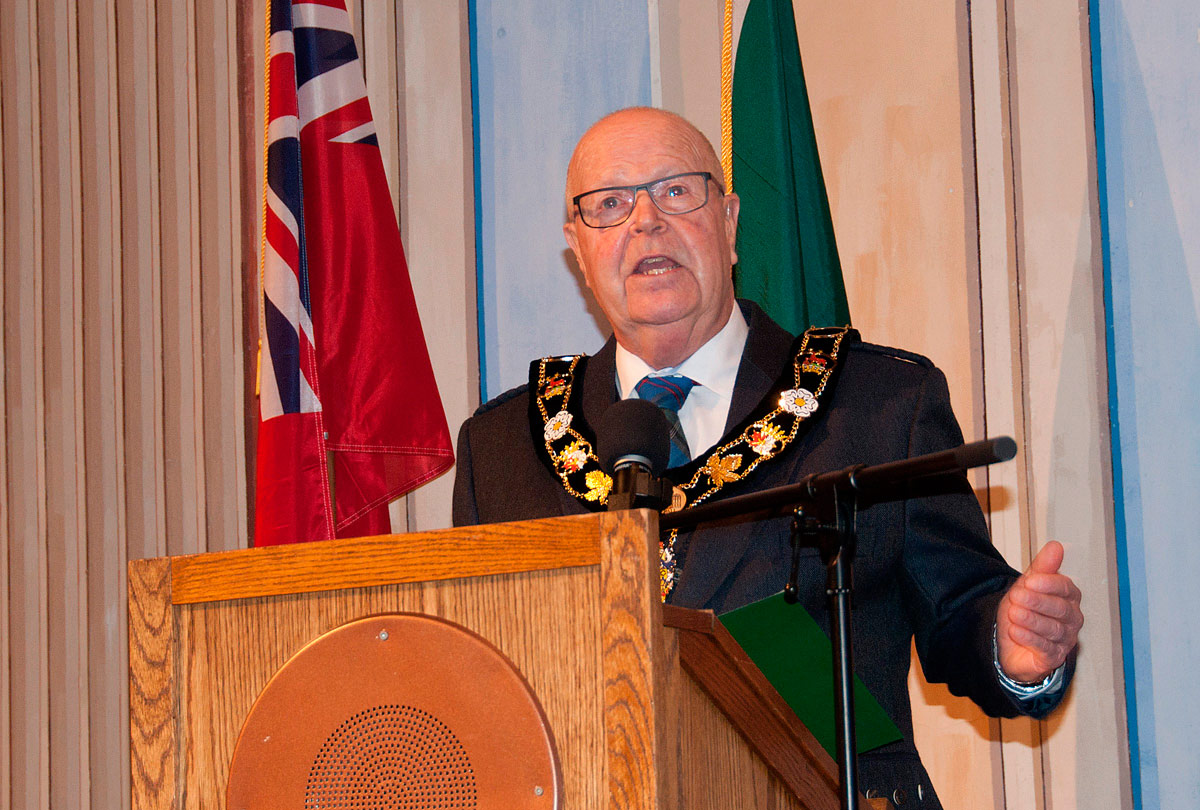 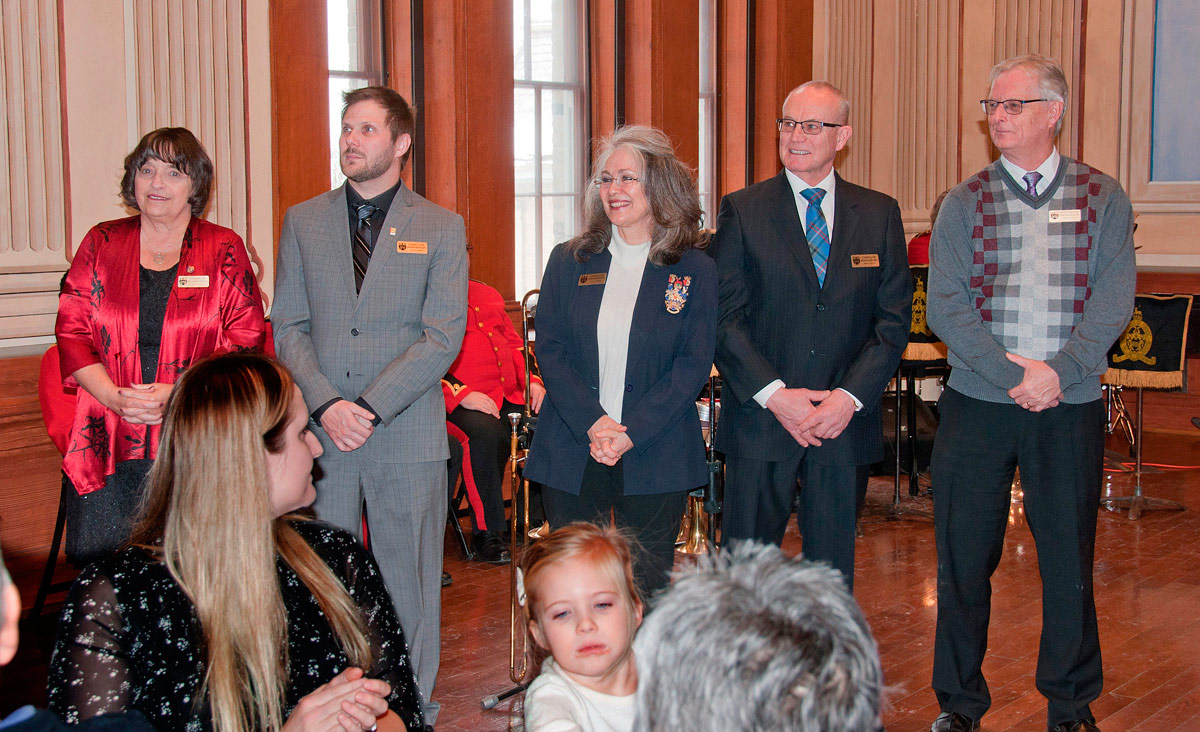 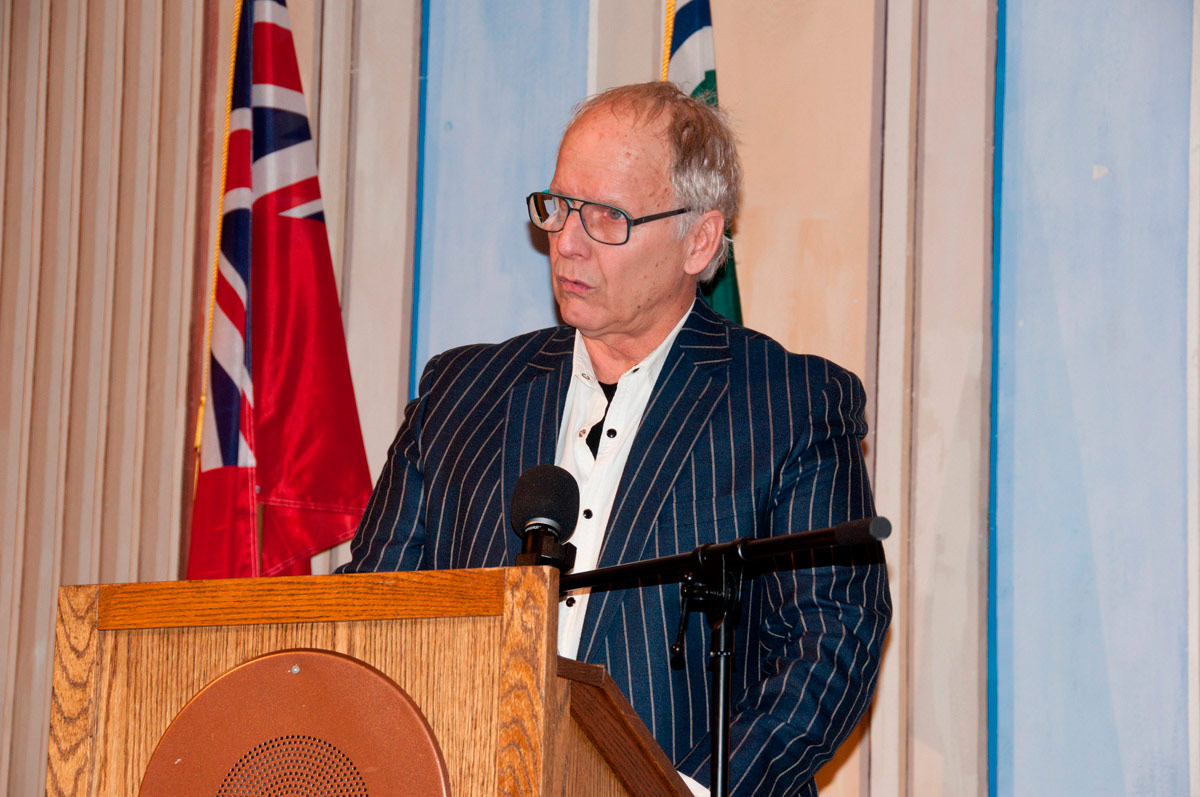 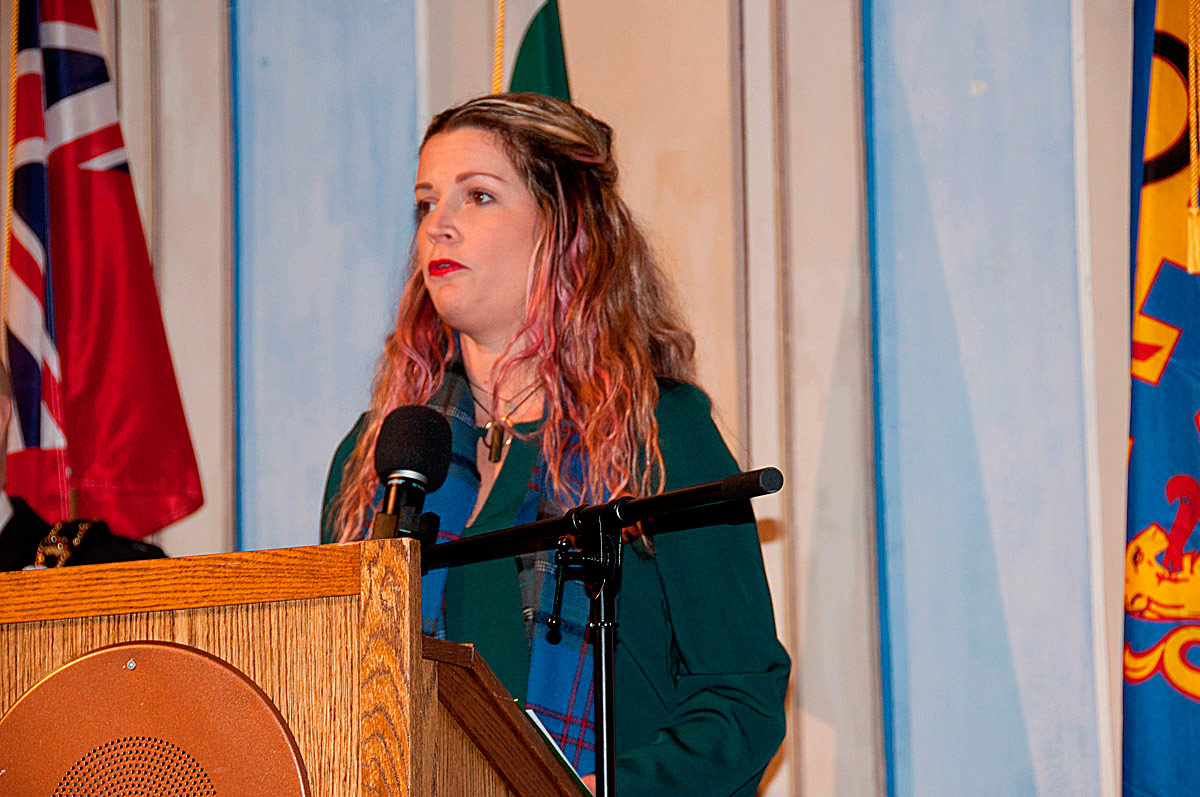 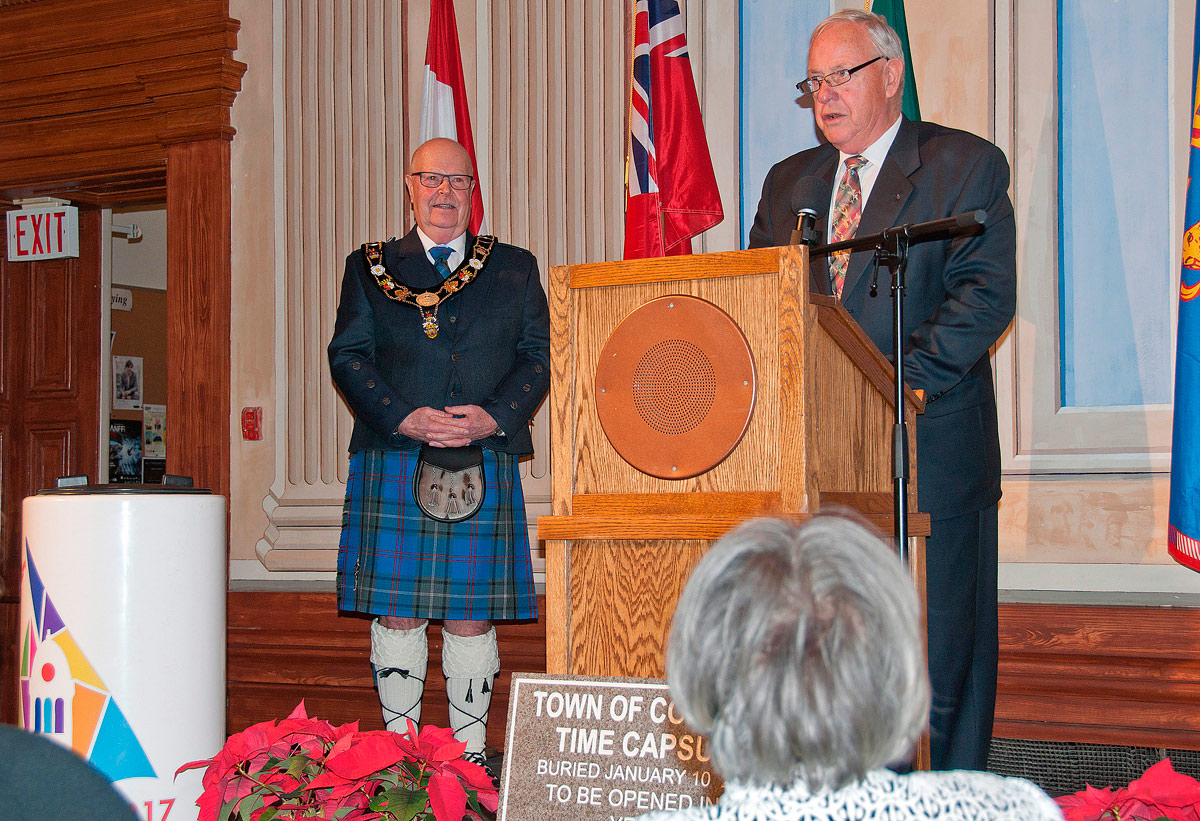 Peter Delanty with Mayor in kilt 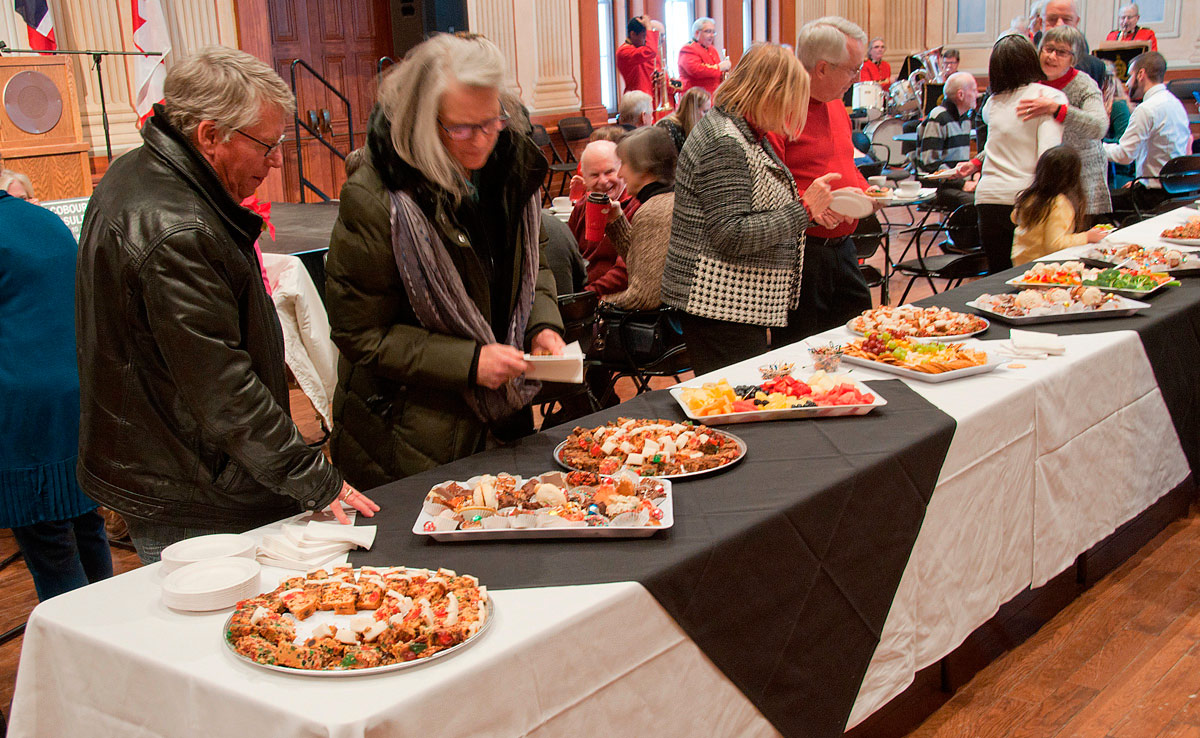