It was more of a declaration that they would work to the best of their ability, be honest with no improper payments and be loyal to the Queen.  At a special Council meeting tonight, the new Mayor, Deputy Mayor and all Councillors made their declarations in front of Justice of the Peace Jack Le Blanc and finished with the statement that this was “of the same force and effect as if made under oath”.  The ceremonies started with the usual Town cry from Mandy Robinson and a poem by Ted Amsden – who finished with the exhortation to Councillors to “Have Fun but never at our expense”. There were about 200 citizens at the event but both MP Kim Rudd and MPP David Piccini sent their regrets.  The audience included about 35 students from the William Academy.

Entertainment was provided before the start by the Concert Band of Cobourg and the usual refreshments were provided at the end.

The “swearing in” was done by each Councillor individually with an identical declaration except that John Henderson was also presented with the chain of office by outgoing Mayor Gil Brocanier.

John Henderson then gave his inaugural speech which he started by saying “Anyone who knows me will know I’m not short on words”.  He thanked the outgoing council and gave some clues as to his plans for the new council.  He said that he will “encourage different points of view since that will lead to more informed decisions …. It will be a more open, transparent and accountable council”.  He also encouraged citizens to get involved in the advisory committees and said that these will be reviewed soon with possible new ones for Affordable Housing and Sustainability.  He listed some important initiatives such as the East Pier, the Asset Management Plan, the Jack Heenan Arena, Venture 13, the Cultural Master Plan and more.  He encouraged people to take the survey on Retail Cannabis (see links below) and come to the Public Meeting.  John mentioned his planned new “Mayor’s web site” and that all committee and board meetings would be open.

The last business of the evening was the official appointment of councillors to coordinator positions. Unlike previous years where it was determined mostly by rank according to votes received, this time it was based more on what they wanted to do plus aptitude.  Coordinators will be as follows:

Appointments to Advisory committees will be made at a later date but some jobs are based on their role – notably John Henderson will represent Cobourg on County Council and on Holdco.  See the Town’s announcement in links below.

Finally, Suzanne Séguin thanked the large number of people who worked on the event but finished by saying “It’s not on the script – but Happy Birthday to Adam Bureau”. 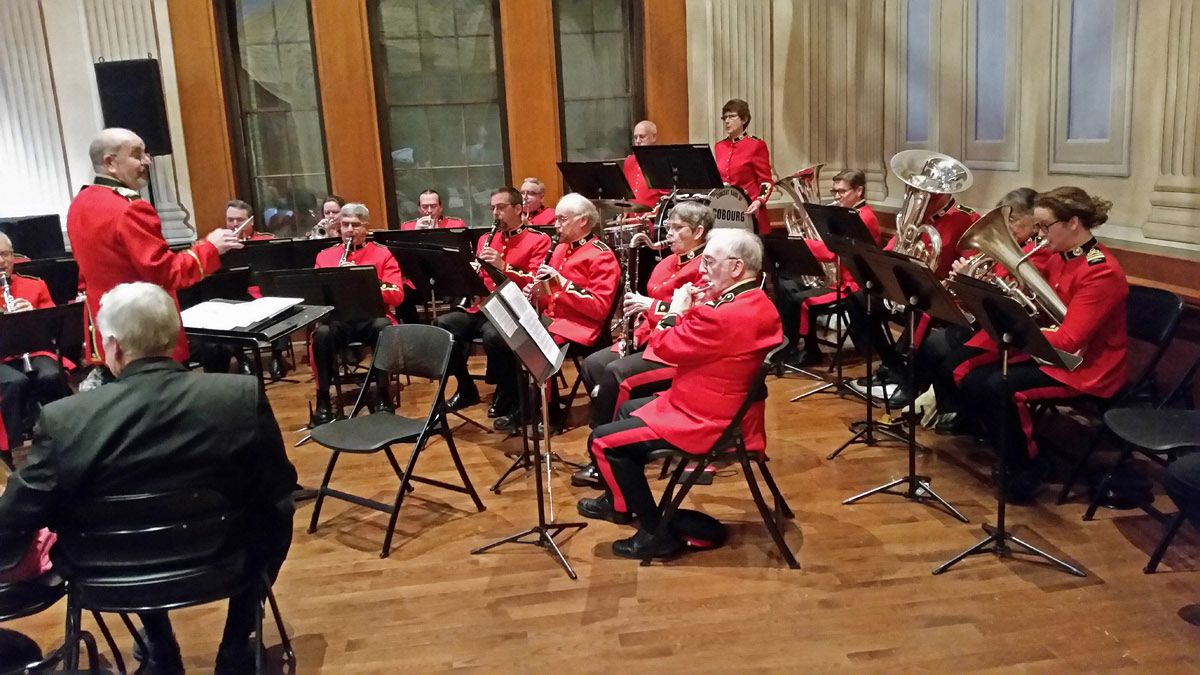 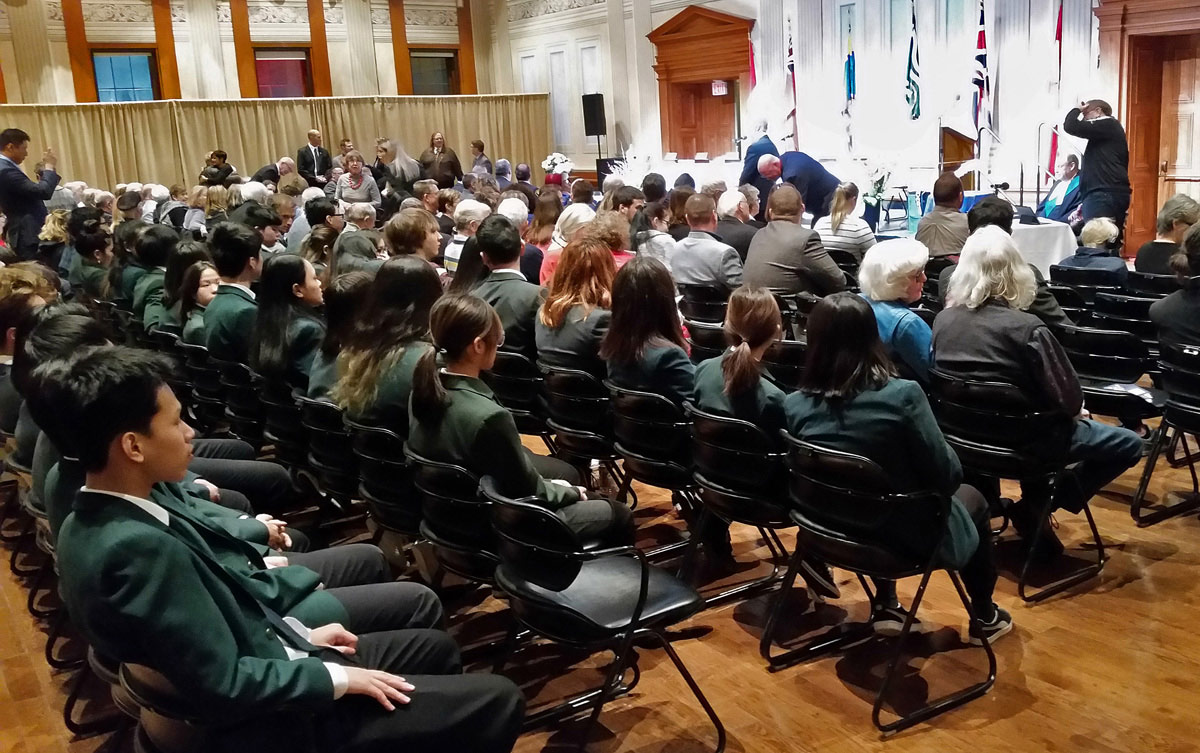 Audience waiting for the start 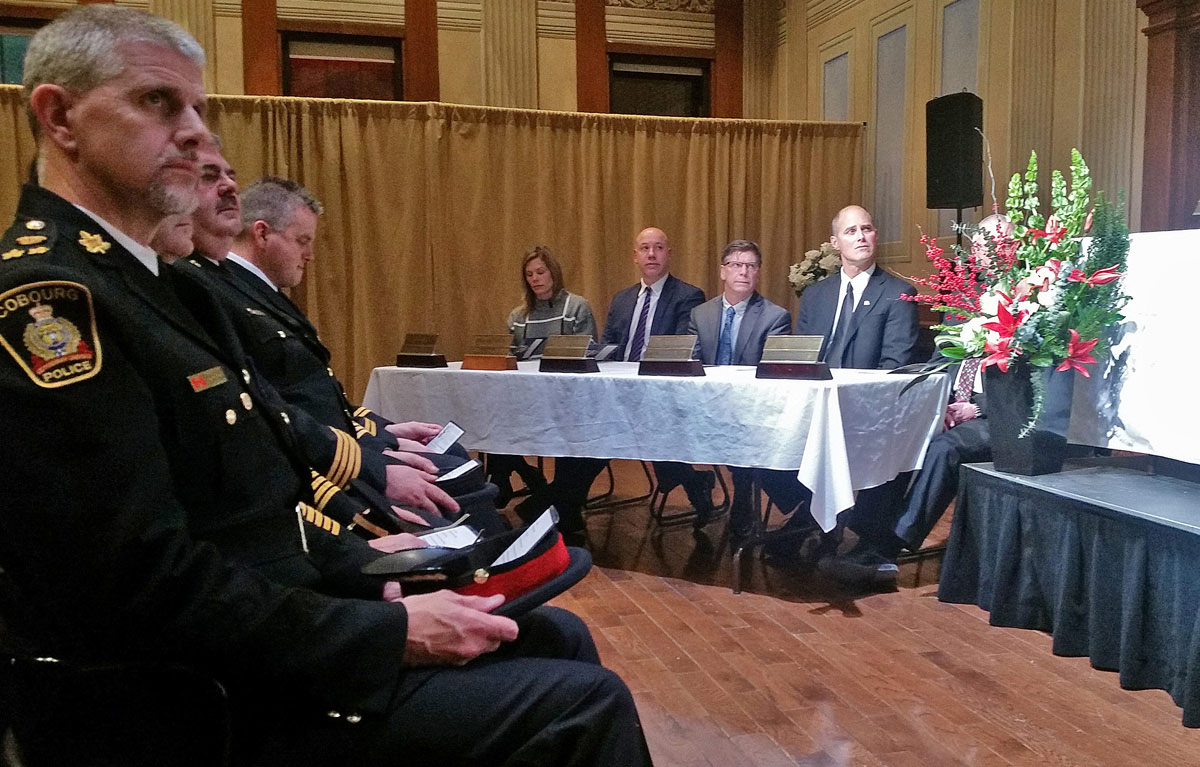 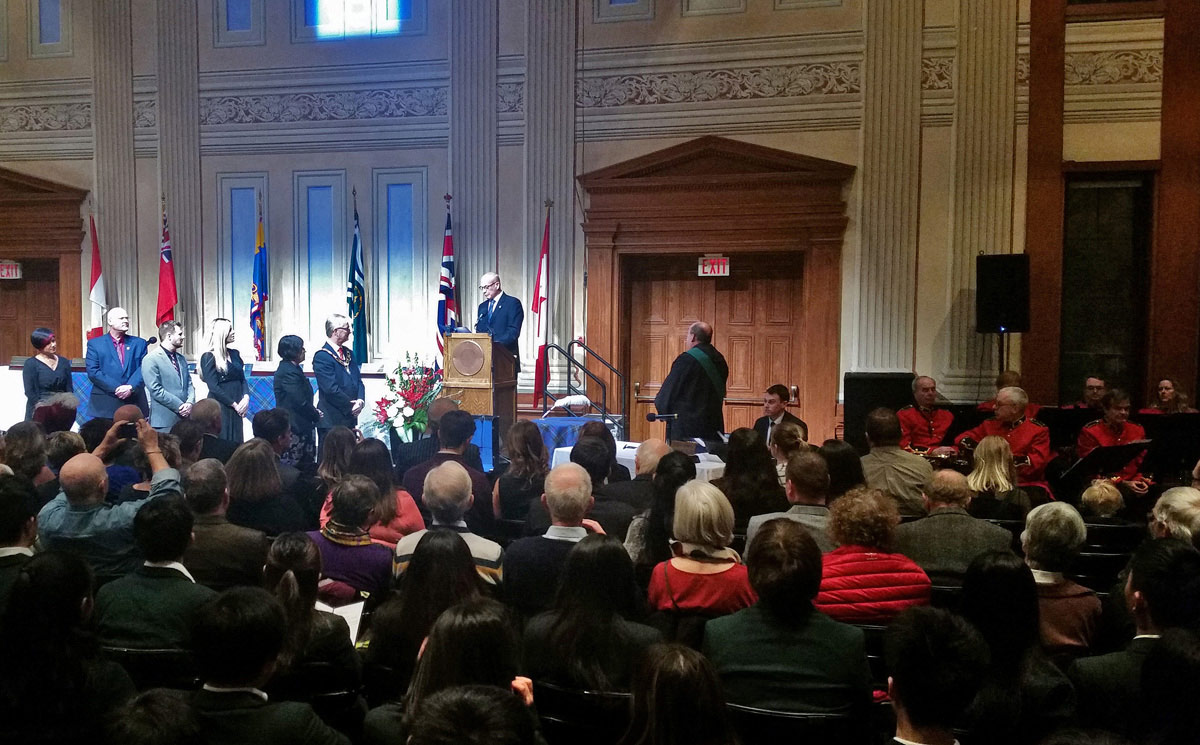 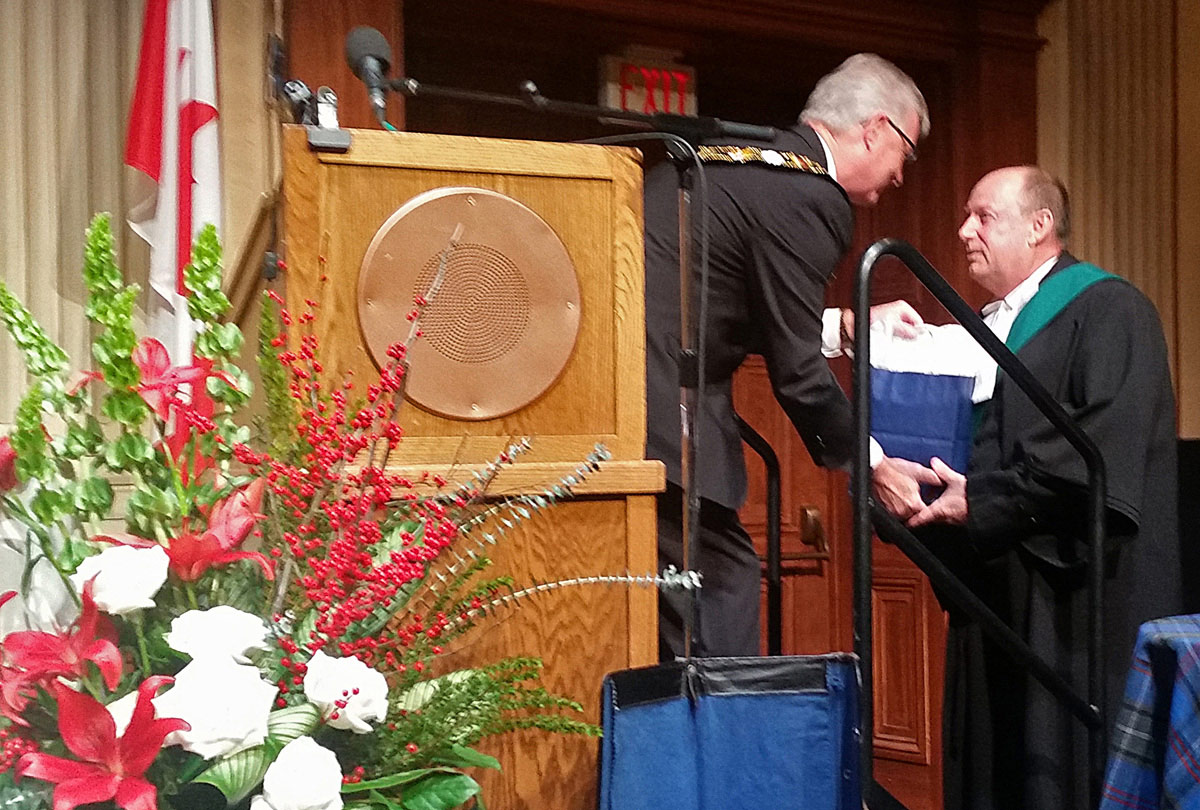 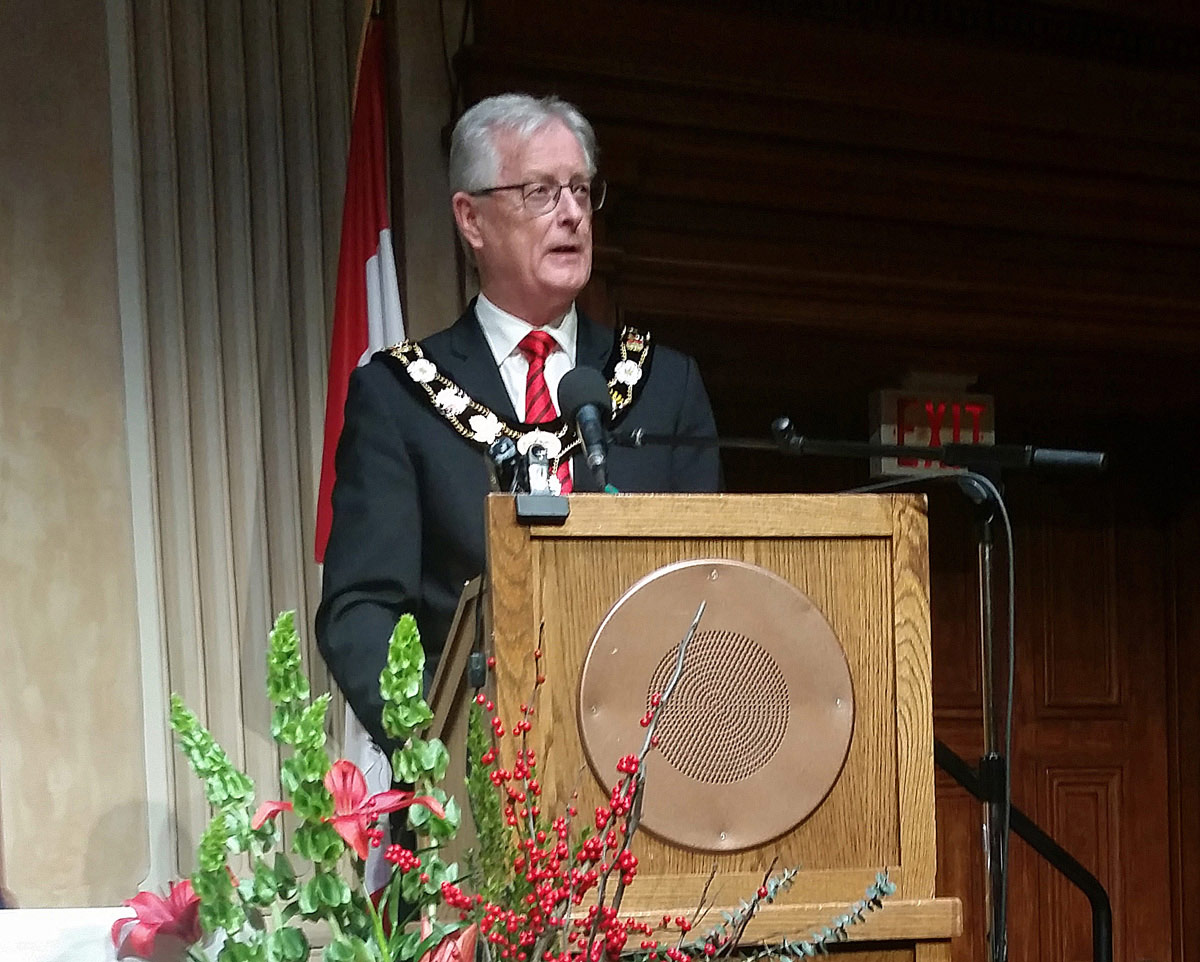 Can’t wait to hear from both Gil and John (detailed report) on their free business trip to China.

Rumour has it that they offered the PLA Navy a base in Cobourg Harbour and the Chinese will run Holdco.

This is the best joke I have read on this website.