On Tuesday morning at the DBIA Board meeting, Deputy Chief Paul VandeGraaf addressed some concerns about a rash of break-ins in the Downtown Area.  Since the beginning of August, 12 of 14 break and enter incidents in the Town of Cobourg  occurred downtown.  This can be seen graphically in their crime-plot web page  – see link below.  And on Monday at the Council Meeting, Police Chief Kai Liu presented his Plan for the next three years.  Although described as a Business Plan, there is no financial report but it does include some limited statistics and a lot of detail on the direction and focus.  Also included are the results of a survey of residents indicating what we thought of the Police Service. There was no report on the Police Business Services Department which operates on the second floor of the Venture 13 building.  However, the Chief commented that they are “on track to bring in $3M this year”.

Deputy Chief Paul VandeGraaf reported that “there does appear to be a cluster of Break and Enters centering around the downtown area of the Town of Cobourg. Based on similar fact evidence it appears that most of the Break and Enter incidents can be attributed to one perpetrator or group.”

All of the current Break and Enter incidents are being actively investigated. Scenes of Crime Officers have attended all scenes where required and Forensic data has been gathered. This Forensic Data includes DNA analysis with the support of the Centre for Forensic Science. At this time, the Cobourg Police Service has identified a person of interest in those Break and Enters.

There have been five arrests in this period where charges have been laid in relation to Break and Enter incidents.

It is rare for police to arrest persons involved in the break and enters at the time of the incident due to the nature of the offence. Break and Enters usually occur when the premise, business or residence is unoccupied and the event is not discovered until much later. Since the beginning of August, three arrests have been made while break and enters were in progress.

The Police are also trying to prevent crime by offering tips for businesses – go here.

The report included some Crime Statistics: 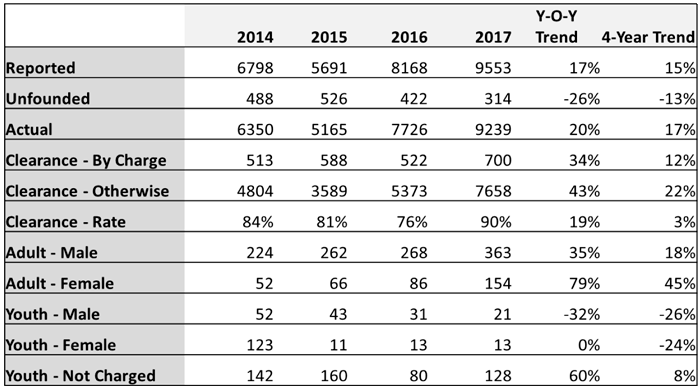 Chief Kai Liu commented that the increase of reported crimes in 2017 was caused by a different reporting system that occurred when the dispatching was outsourced.

A total of 272 individuals responded to the online survey – mostly aged 25 to 74.  93% agreed that Cobourg is a safe Town to live in but 40% believe that crime has increased – Kai remarked that “Perception is reality” and that he had work to do.  In a discussion of this, Kai said that some of the perception is due to poor reporting and that unfortunately Police are constrained from fully responding to this because of privacy issues.  Download the full report (link below) for more details on the survey.

In commenting on the Strategic Objectives, Kai pointed to the recent implementation of tiered policing (see link) with Special Constables (mostly retired officers) and Auxiliary officers (volunteers).  These have helped provide more foot patrols.  And with the addition of GPS on their radios, the location of officers is now always known.

As reported earlier in the News Update box, the Police are now hiring a Communications Officer to help manage two-way communication between their officers, the media and the public.  Download the job description below.

On Friday the 5th day of October 2018, at approximately 11:30 am, police located the male at a residence in the downtown core. A 41 year old male, Vincent Stephens of no fixed address has been charged with nine (9) counts of Break/Enter and Theft and Fail to Appear for the Identification of Criminals Act.

The investigation continues into other incidents, and further information will be made available at a later date.

Victims of these Break and Enters are being contacted at this time in continuation of this investigation.

Criminal investigations of this sort do not have successful outcomes without the support of the community. Chair of the Cobourg Downtown Business and Improvement Association, Mr. Adam Bureau commented “That he is relieved this crime spike has hopefully ended. The DBIA Board stands by our Police Service and will continue our partnership with the police as we to work together for the betterment and safety of our members and the public in our downtown.”

Does anybody, anywhere actually use the thoroughly antiquated format of “…nine (9) counts of Break/Enter…” these days? That format went out with handwritten documents, where it was used to ensure no misunderstanding of the amount being stated due to bad handwriting, but now with printed documents, it’s just quaint and totally fatuous.

In a small town like Cobourg, I would think it’s the “Chief’s Job” to be the communications officer with the Press and the Public. Here we go again allowing the Chief to build his empire with an additional wall. Perhaps our police staff problems are rooted at the top of the chain.

As a victim 3 times in a 1 mth period , I know all to well how quiet the CPS is about informing the public. They will not do press release about any high crime in our area. After I emailed chief numerous times AND went to papers , they all of a sudden opened up. I can understand why so many officers are in leave. Having to work like that is un safe for both officers and the public

Perhaps our town should have another look at what the OPP can offer in manpower and at what cost as it sure looks like we are not getting our money’s worth with the current set up.

I agree 100%!! Lets see what the cost difference would be to get the OPP to police our town!

And as an aside, maybe someone should get a new razor for Paul…..it looks like the other one is broken….no offence intended.

Men have facial fur. Get used to it.

Not surprising, no comment on half the front line police officers being off eork.

Then again they never miss a photo op.