Last Wednesday, the Town of Cobourg held a Public meeting to provide an update on the Tannery Project and once again get public input (See links below for earlier reports). About 50 people showed up – including Councillors Aaron Burchat and Debra McCarthy, some members of the Planning and Sustainability Advisory Committee and several members of the consultant’s team.  Director of Planning Glenn McGlashon made it clear that the intent is not that the Town will get into the development business but that it is setting policy and guidance.  The final report will recommend details of zoning and a Secondary Plan.  This will guide what happens in the area over the next 20 to 50 years.  As well as the vacant Tannery land, the district includes land currently occupied by industrial buildings (such as the GM dealership) and the two legacy arenas.

Citizens were asked to give feedback on 5 options (see below) – all of them demonstrated sustainability and an “implementable vision”.  And not just Environmental sustainability but also Social, Economic and Cultural.  Some of the audience were neighbours and were concerned about traffic.  They were assured that despite the plan including relatively high density housing, traffic would be studied and solutions found to any concerns before any approvals would be given for construction.

Key Features of the 5 Options 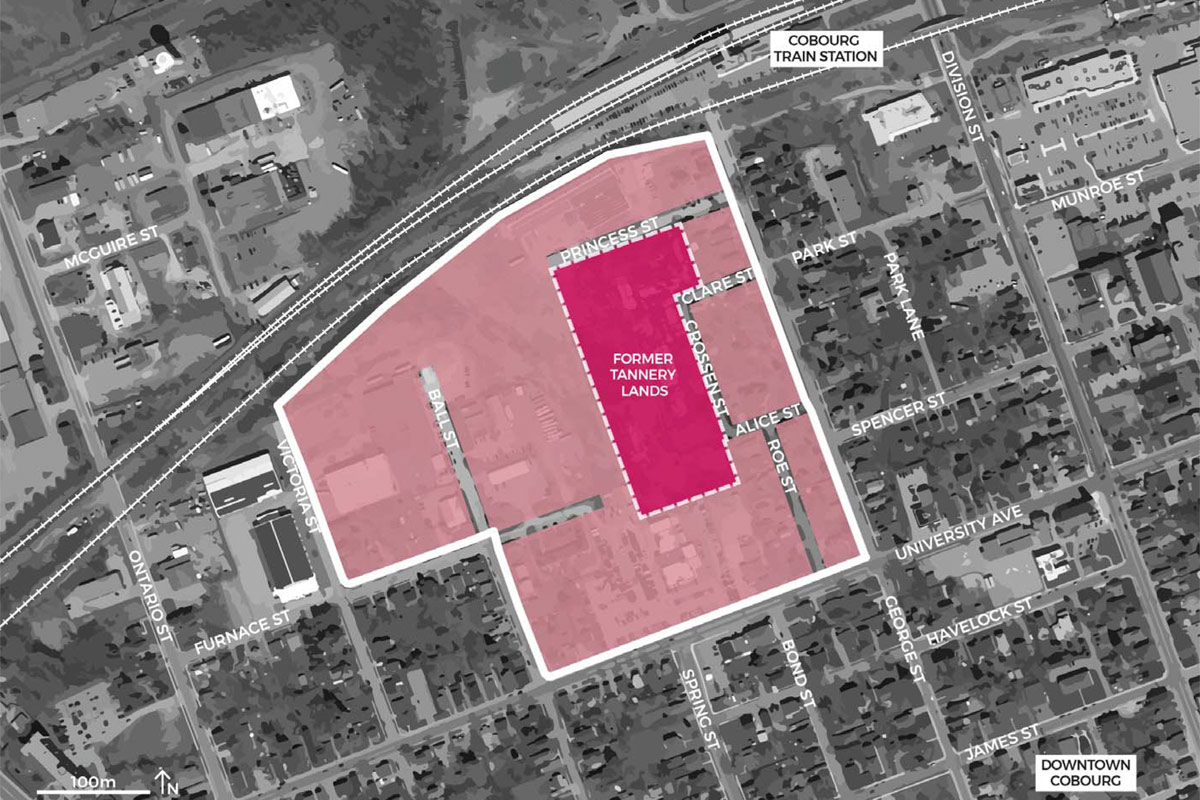 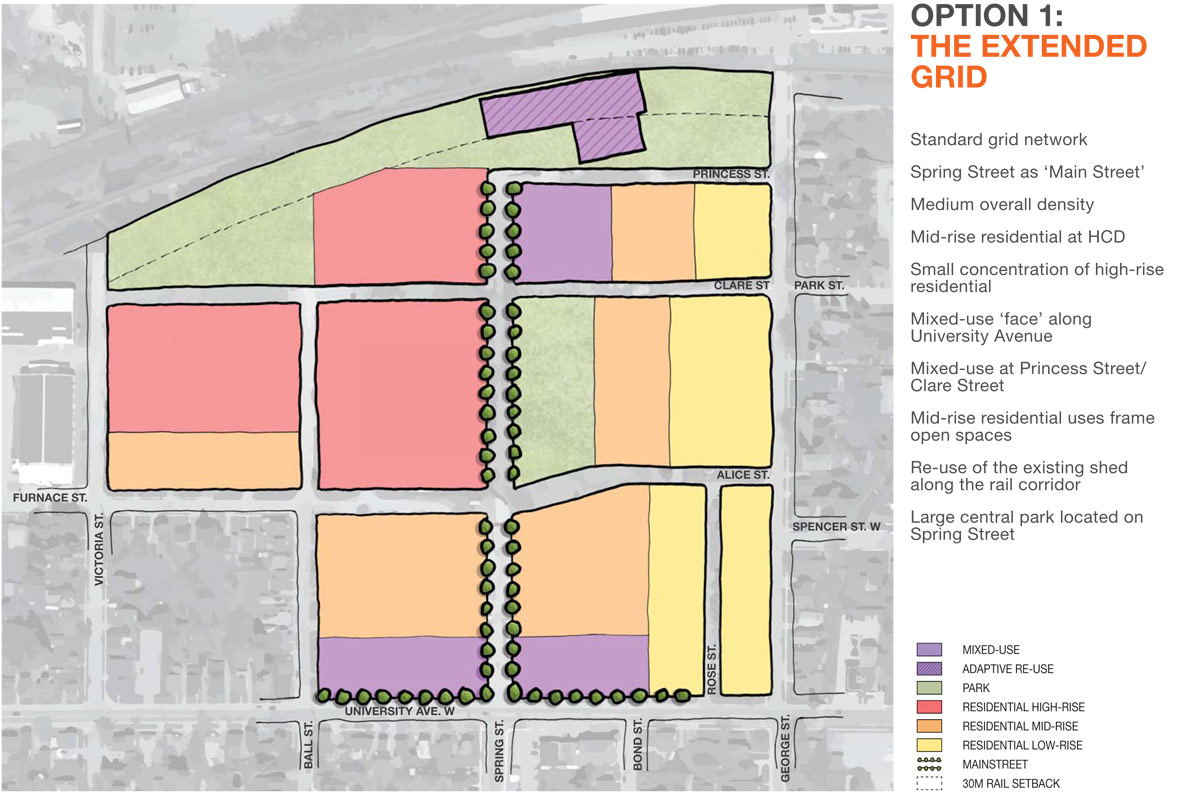 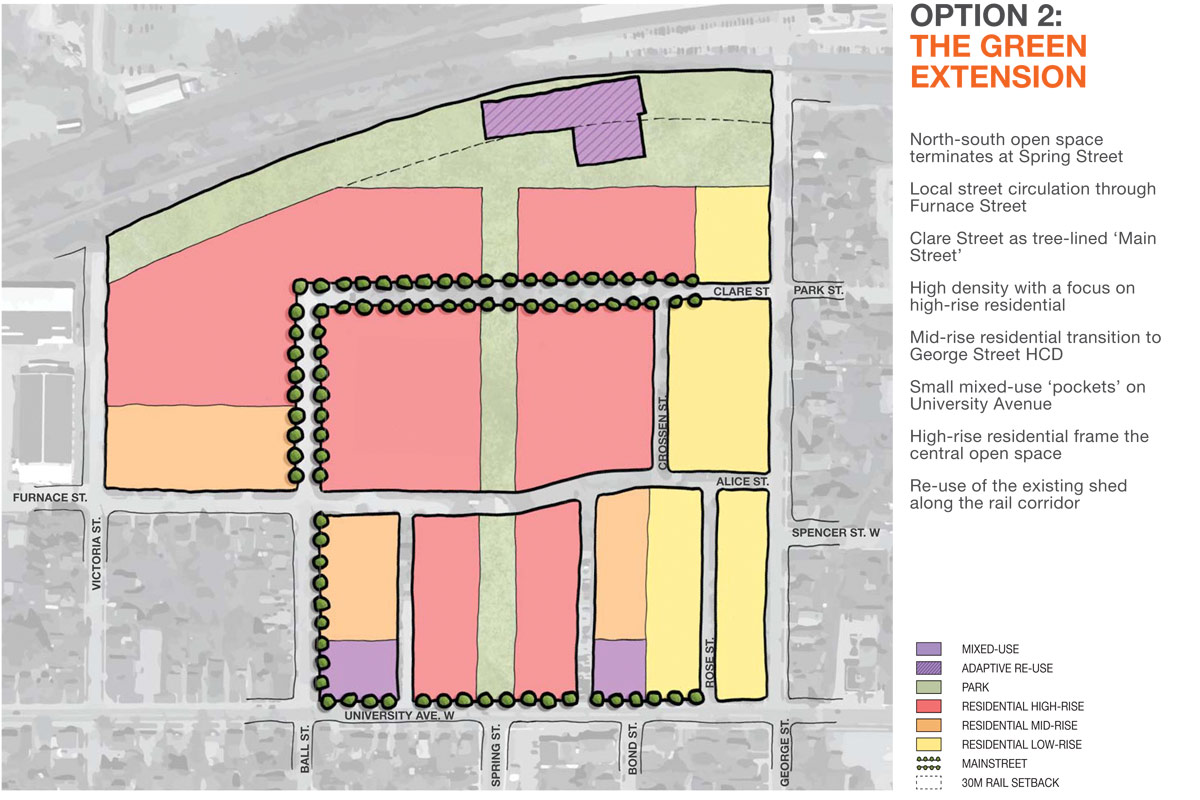 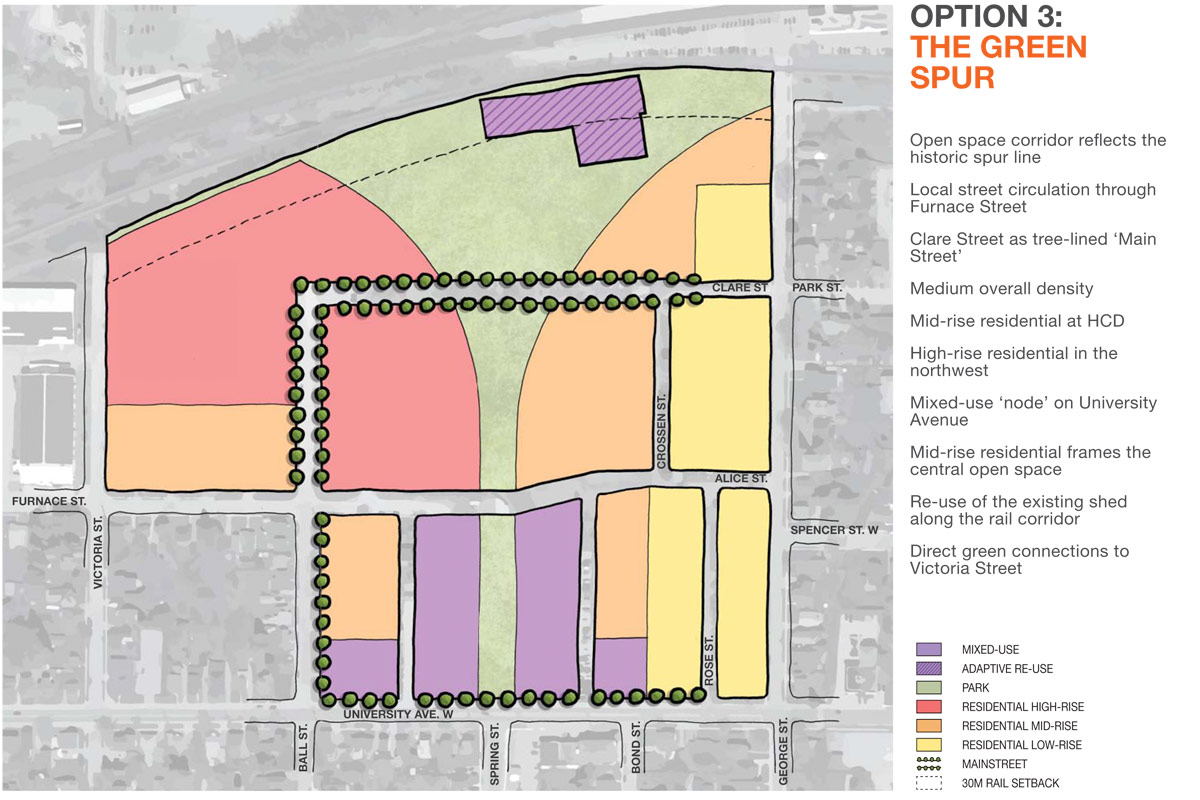 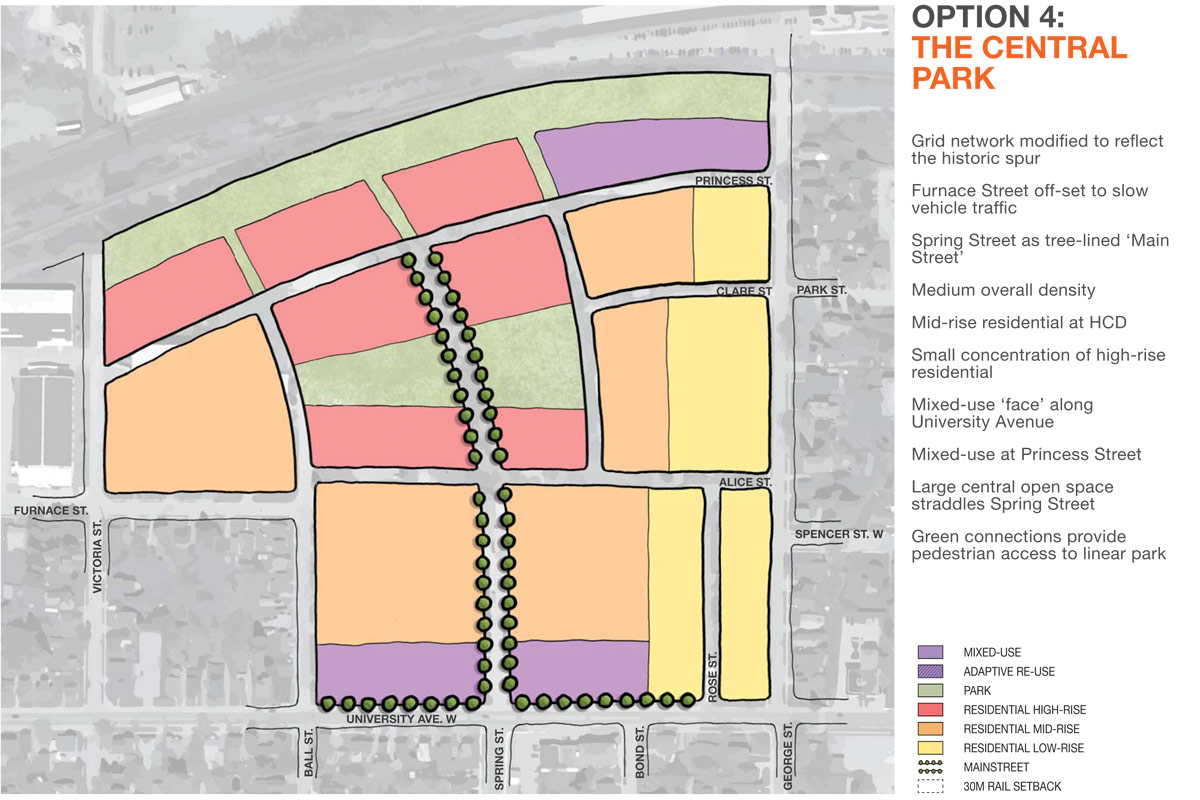 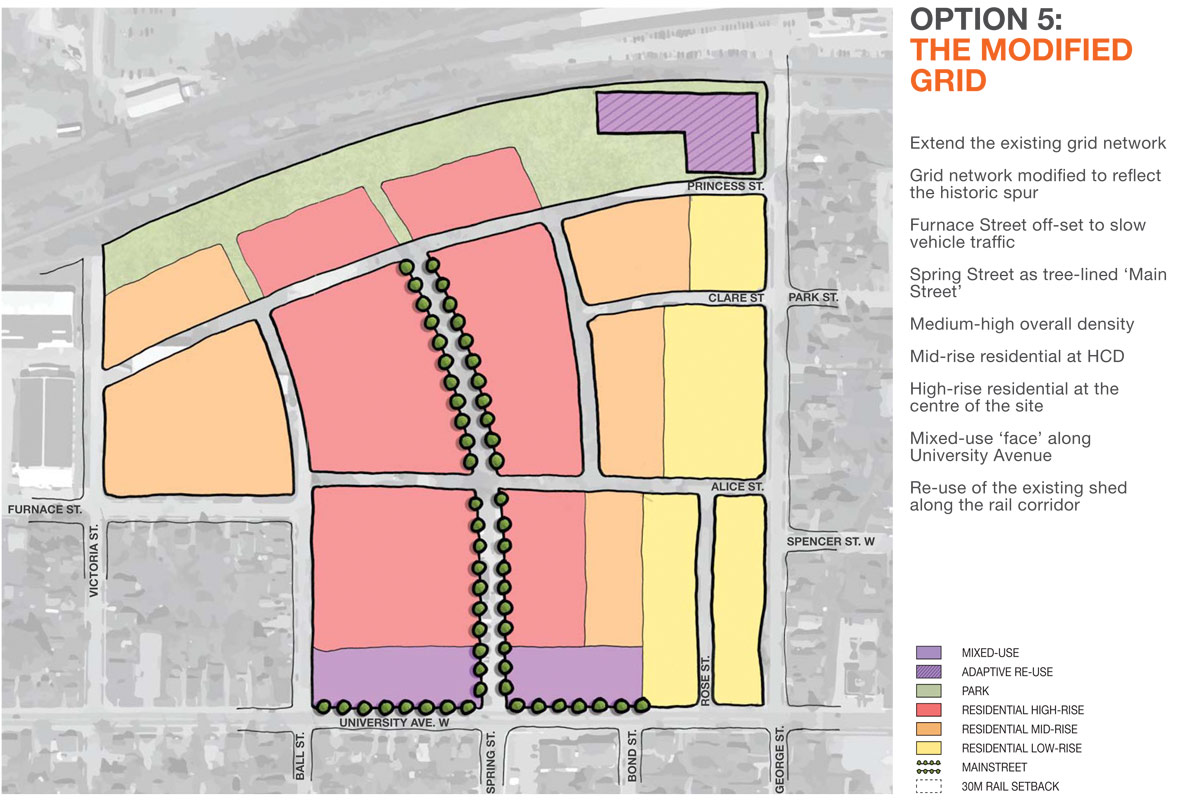 The Consultants (Fotenn Planning & Design and Urban Equation) are being paid $100,000 for their work but half comes from the Federation of Canadian Municipalities who have granted Cobourg $50,000 from their Green Municipal Fund.

The schedule shows that a draft Master Plan/Secondary plan will be available May-June 2018 and there will be a further public meeting late in the year before presentation to Council for approval.

In addition to comments made by those at the meeting, residents are welcome to make additional comments before April 11, 2018. (Go to Town page on the Tannery District).

Here are some old photos of the property – click either image to enlarge and access a slide show. 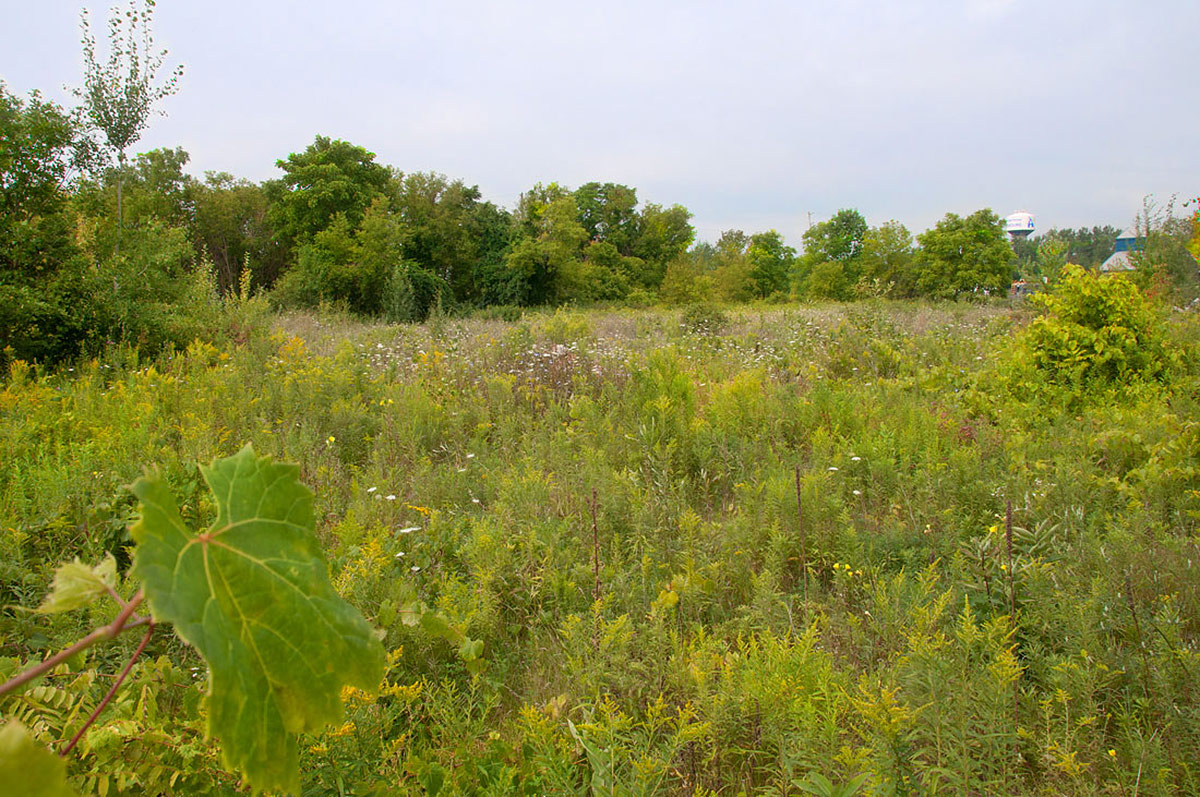 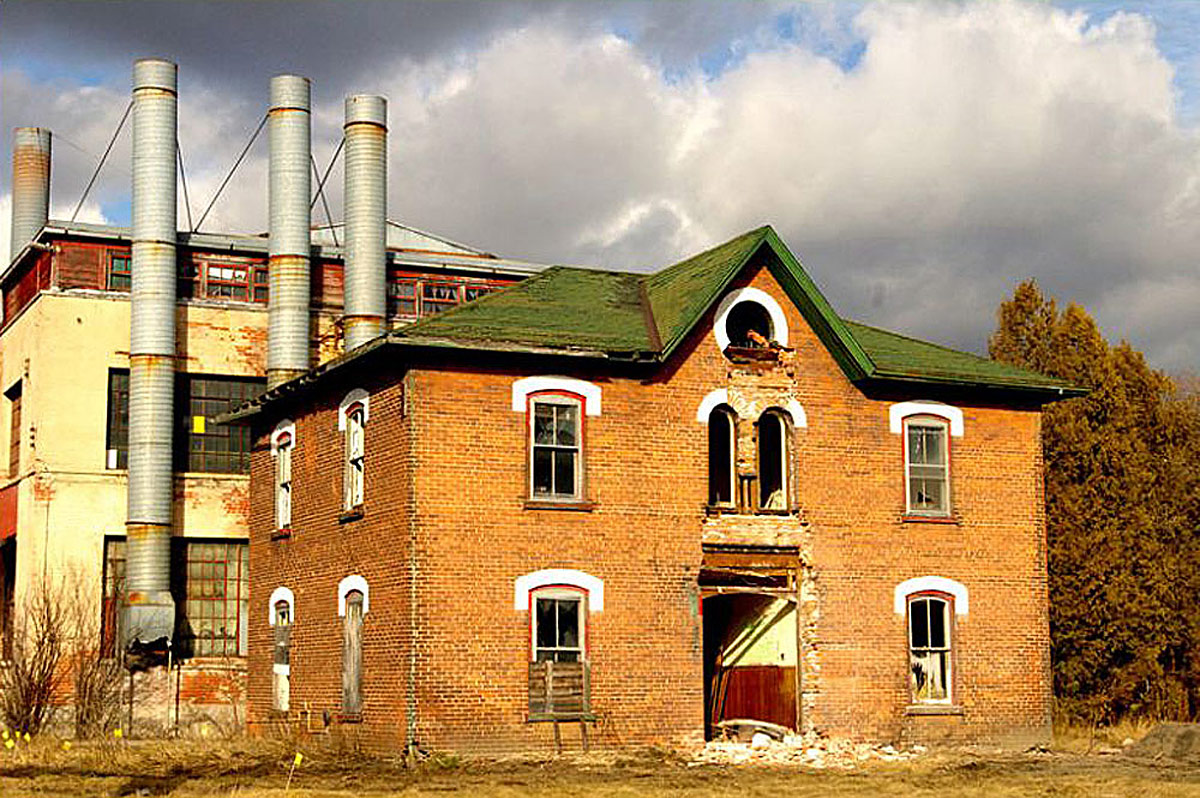 Links have been removed since articles are no longer available.

These sketches are awful: they are not even close to scale and they even spelled Roe Street incorrectly. If you look at Google Maps using the satellite view you’ll see that if Spring Street is extended north of University Street it will cut the Thomas Buick GMC dealership property in half. Even if the dealership property owner agrees to allow a new main street to slice through his property it would cost the Town a lot of money I’m sure as he would need to be compensated fairly.

Again if you look at the satellite view of Google Maps you can see that Ball Street — or even Victoria Street — is a perfect southern option for the new main street into and out of the Tannery District. The north-east main street into and out of the Tannery District should be Princess Street instead of Clare Street. Princess Street has a lot more room to work with than Clair Street does – also it’s closer to the train tracks and runs parallel to them which, in my opinion, would be better used as a main road than an area for structures (because of the noise).

Ball St. is not a “perfect option”. It’s quite narrow south of University Ave. and was therefore made one-way southbound below University Ave. decades ago, with no real way to widen it these days. We drove both up and down Ball St. before then with no problem, but our Corvairs and VWs were smaller back in the 60s and 70s than the big SUVs and monster pickup trucks that now pass by.

Just some one in the Town Hall imposing their ideas and thoughts of control over existing property
owners and Business in the area & jobs that we need . These guide lines will only serve to stifle any future uses
of the existing properties The large Building on Princess is Industry it used to be General Wire and Cable
industry is still happening there . What the Heck is RE PURPOSE ? Tear down , Boutique industry with no outside storage or trucks / may be it means only operating between the hrs of 9 to 5 and never on wk ends
Probably no Bright lights at the Car dealership lot so every one can sleep .
Let a Buyer make their own submission The last time the property went to Market there were offers
the town wouldn’t accept them Besides who really wants to live next to one of Canada s busiest Train Routes
I know wecan call it affordable housing !

Has anybody done a hydro-geologic study of this area lately? I distinctly remember watching water flowing out of a small spring into a “pot hole” some decades back, directly north of the top of Ball Street (which ended at Furnace St. at that time) just north of Furnace St. Apparently Spring St. got its name from other such springs in that area.

Option 3 The Green Spur, keeps all of the park land in a single mass, that follows the curvature of the spur, as well retains the existing shed for peoples imagination, and provides a gathering grounds around it. The parkland along the tracks is a great opportunity for Cobourg to display its creativity to all passing VIA for decades into the future.

Isn’t there currently a stop-light at Ball and University Streets? If there is then the southern main road into/out of the Tannery District should proceed north on Ball Street instead of Spring Street…otherwise there’ll have to be another stop-light put in at Spring and University Streets which would be a waste of money as well as adding more traffic congestion to the approach to George Street from vehicles travelling east on University which is already congested in my opinion.

There is no stop-light at Ball St. and University Ave., largely because Ball St. is one-way southbound, so it wouldn’t serve any purpose except for the little stub of Ball St. north of University Ave.

The 1st time I moved onto Ball Street was in 1945.
I was very young at the time.

Wondering if any of that land will be for a public park for the new high density residents?

I have trouble understanding what happens to the dealership? Who says they are ever leaving? They just re-did their showroom.