With no-one contesting the nomination of Kim Rudd as the Liberal Candidate for the 2019 Federal Election, Prime Minister Justin Trudeau came to her nomination meeting to declare her the official Candidate.  No other party has yet had a nomination meeting in the Riding so Kim is off to an early start.  The meeting tonight at the LiUNA hall on Dodge Street in Cobourg was full with an estimated 350-400 people.  Most were Liberal supporters but not all; there were some Conservatives, notably Candidate Philip Lawrence with some supporters (see photo) plus some protesters (who were barely heard) and of course the National and local media.  The event was billed as open to all and starting at 6:00 p.m.  At around 6:30 p.m., the Cobourg Police Pipes and Drums came in and “entertained” until around 7:20 when Justin came in.

Both Justin and Kim spoke for about 5 minutes each with mostly partisan comments aimed at the faithful but the crowd cheered loudest when Justin thanked everyone for their support in the recent NAFTA negotiations when he was encouraged to stand up to the Americans.

Most of the people were standing and grouped around where they expected Justin to be but before he appeared, his helpers made sure that babies and young kids were at the front.  One example was right in front of me when Mike and Danielle Hendren from Peterborough  – with their baby George – were positioned for a good photo (see Photo below).

Trudeau pointed to his long association with Kim and she reminded him that he had visited the Riding five times.  In her speech, Kim thanked her husband.  She said she had been married to him for 40 years and that she had lived in the Riding almost 40 years.

Police and Auxiliary constables were visible as were both the Chief and the Deputy chief in full regalia.  They must have been successful since there were no incidents although a few protesters were evident.

After Justin and Kim finished speaking, Justin worked the crowd – shaking hands and having short chats with many of those there. 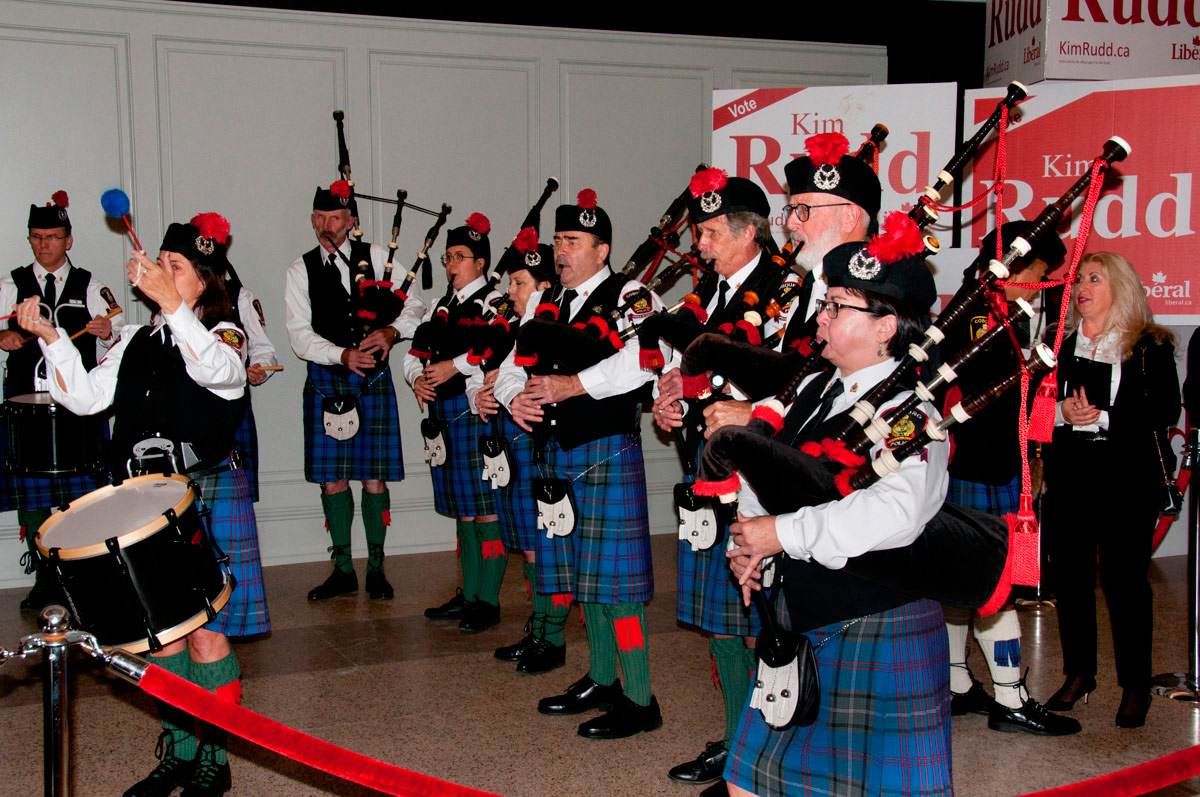 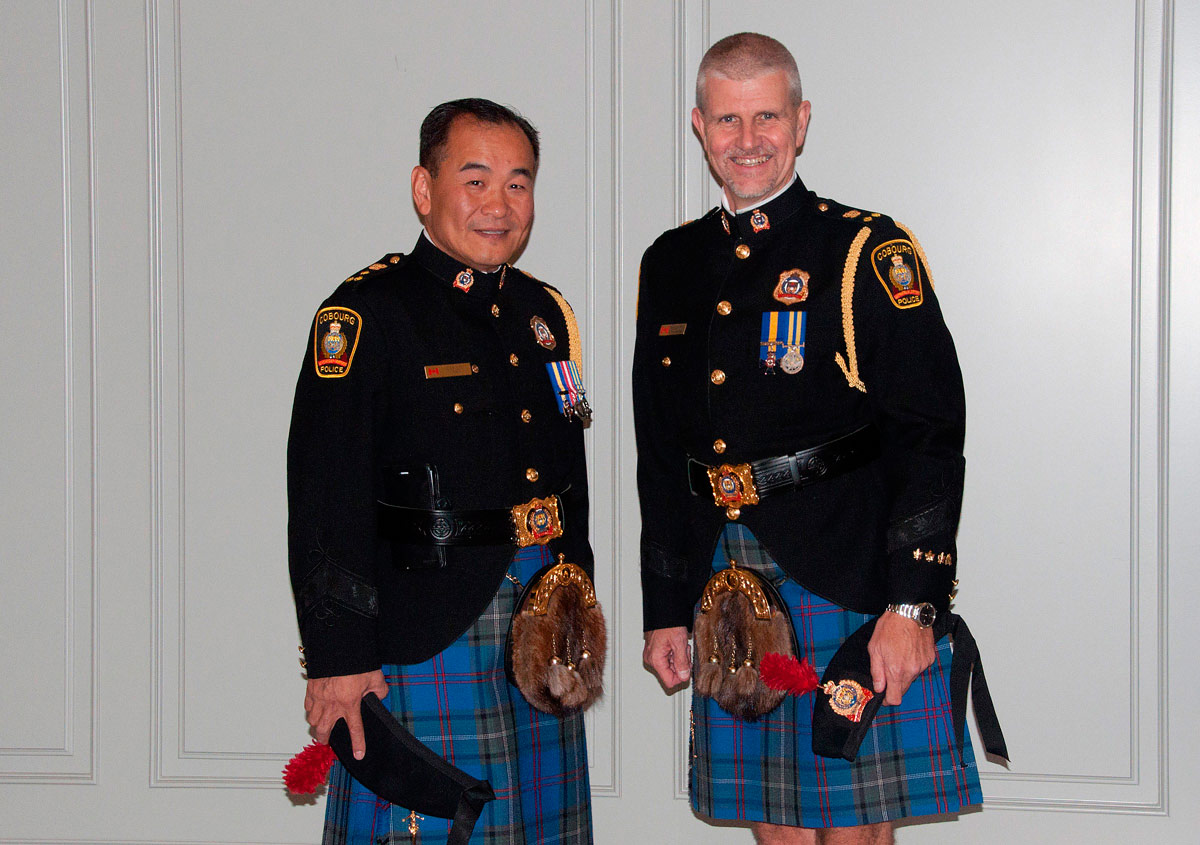 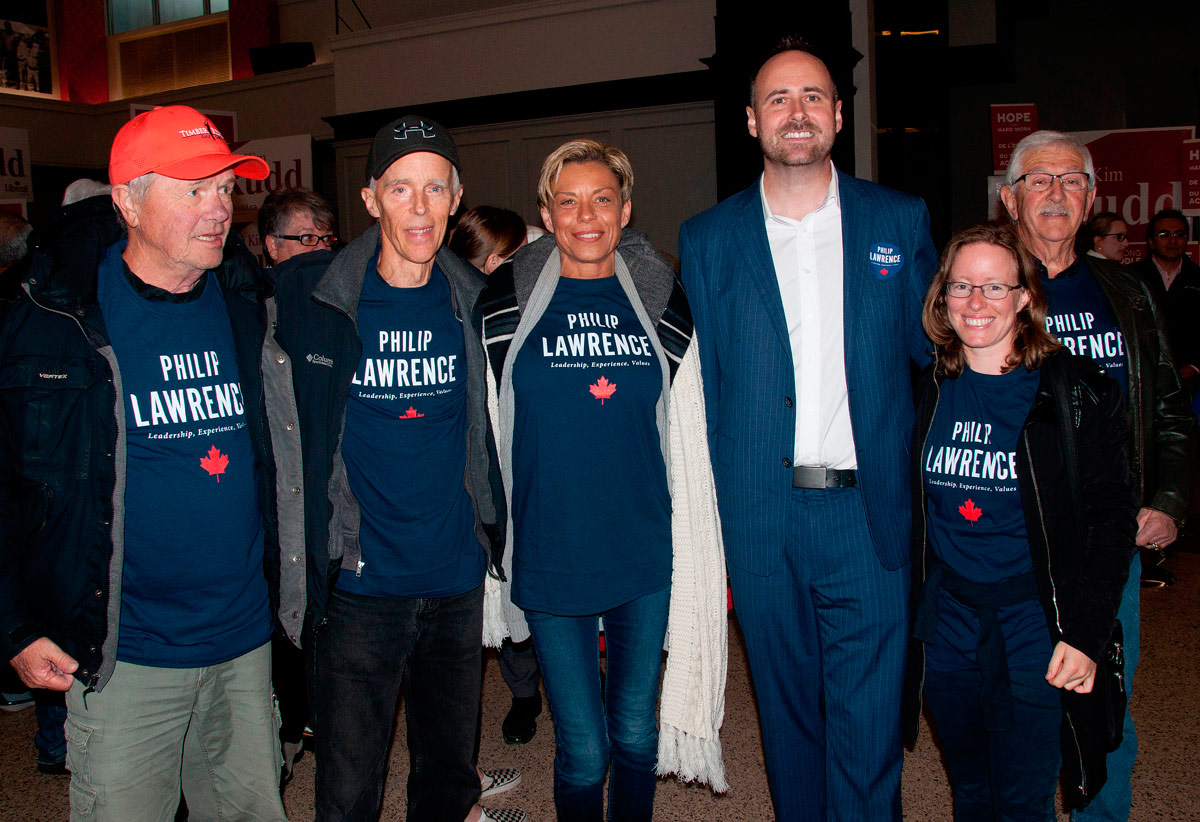 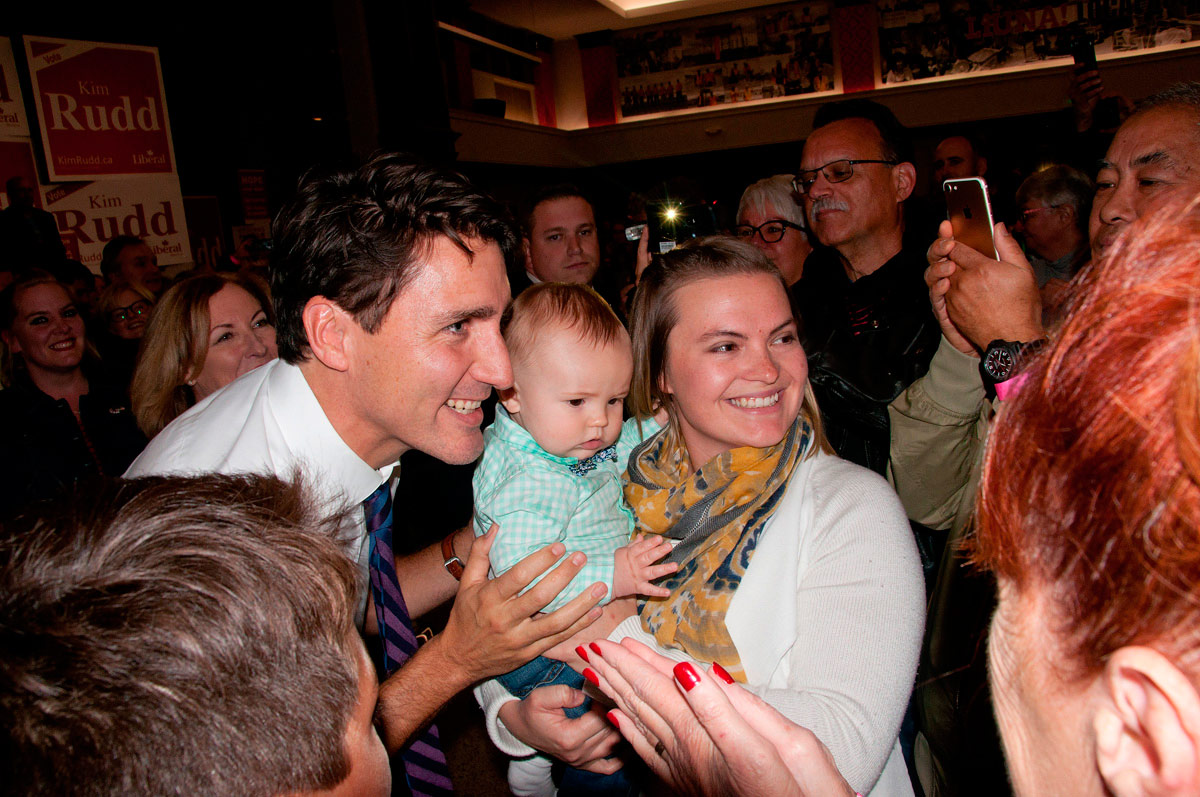 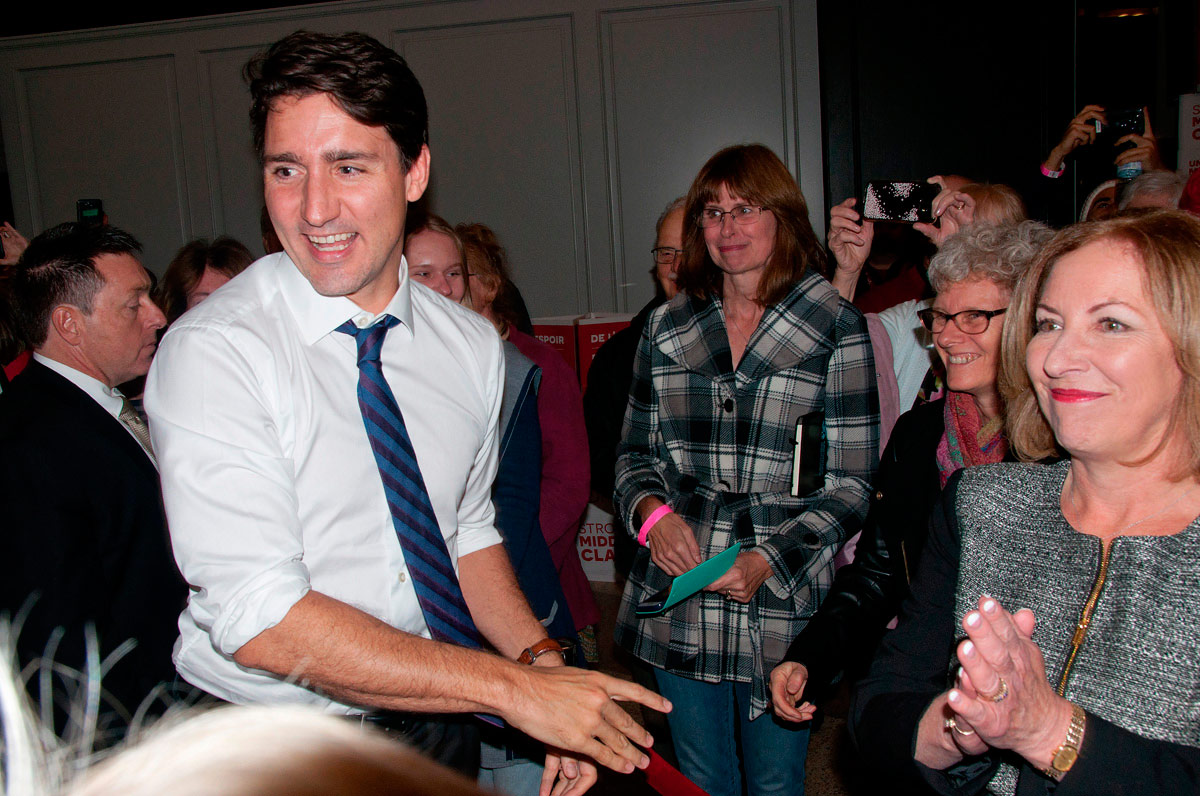 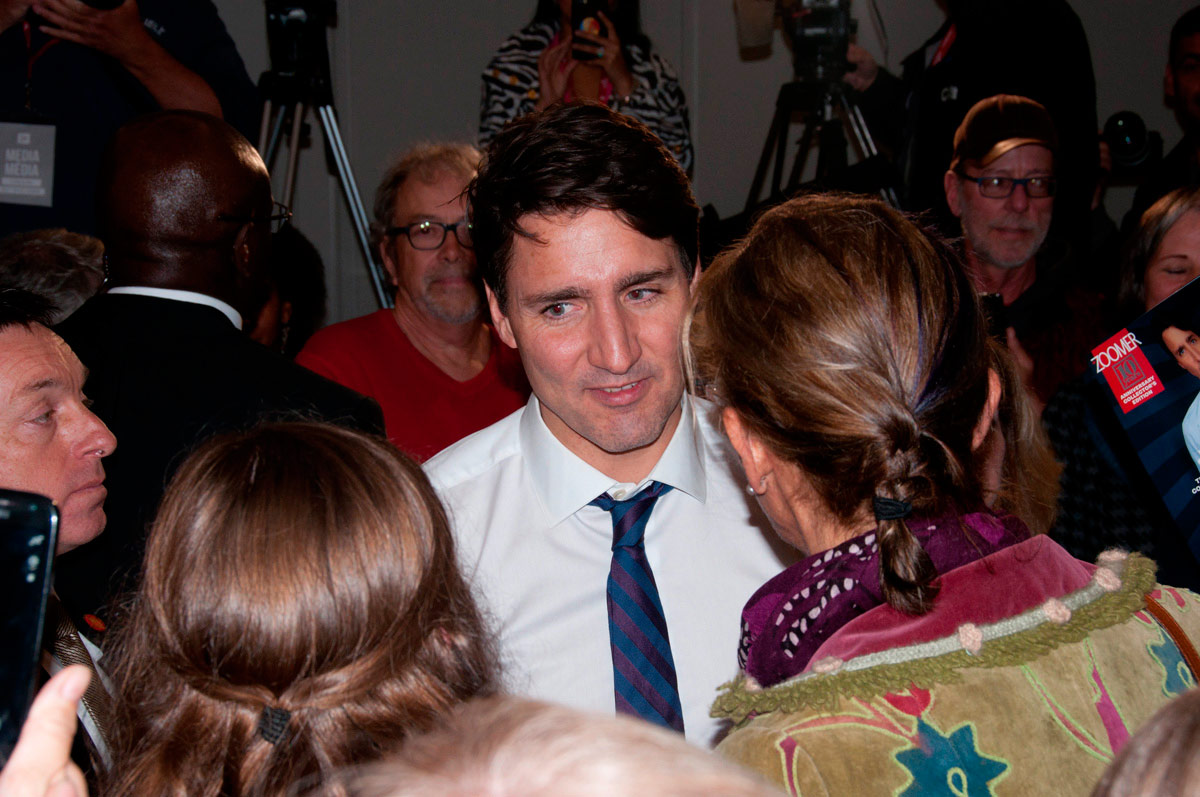 Police Service Act
Activities while not on duty
12. (1) A municipal police officer who is not on duty and who is not in uniform may engage in the following political activities:
2. Attending and participating in a public meeting, including,
i. a meeting with elected representatives or government officials,

Isn’t it great that we live in a country, province, town in which no one commenting on this blog will be tortured and assassinated should they wish to get a parking permit at Victoria Hall.

Why would anyone want to go and see Justin hem and haw and try to look cool by not wearing a tie? Now if he had dressed up as the Town Crier or some other ridiculous costume which is his wont, maybe that would be worth the trip.

The reason prince valiant never stayed long was there were no costumes for him to get dressed up in, but it was nice that he blessed his followers with his presence

Those rolled up sleeves made me feel that he is really just an ordinary hard working man.
Or that he is actually a member of the “middle class, and those working hard to join it.”
Heh, heh, heh…

The Chief & Deputy were in the costumes. I thought police were supposed to be non partisans. Oh yeah, we do not have enough front line police officers to actually do what they are paid to do.

Yes, our police force gets off on multi-culturalism, as long as it’s sort of Scottish.
What’s next?
Leprechaun hats or war bonnets, wooden shoes or lederhosen for the firefighters?

Did some checking and it is actually against the law for a police officer to appear at a political meeting in uniform according to the regulstion under the Police Act.

There were other police outside but only the chief and deputy inside. The pipe band was also the Police Pipe Band, and not the Legion pipe band. Maybe there’s a connection there somehow.

Let’s hope the Chief and his Pipe Band show up for a Conservative event held in Cobourg at a future date. Perhaps he should commit to it as well.

It wasn’t a success for all. I left without hearing the speakers at 7:15pm as I am a person with some physical challenges & can’t stand for extended periods of time. I arrived 50 minutes early to the advertised start time so I could get a seat with a good view.

By 7:15 pm I got fed up not being able to see the Piper’s and could no longer sit in the uncomfortable chair any longer and left.

In this day and age it was insulting to me that the organizers let everyone stand in front of the ~24+ chairs blocking people’s views.

In addition, my sister who also has physical challenges was unable to park near the entrance of the facility and knew she would not be able to walk the distance to veneue and stand in the long entry line so turned around and went home.

To add insult to injury by the time I was pulling my car out of the parking lot at 7:40 pm heading home people began spilling out of the event.

Is this the best facility we have in Cobourg for these type of events?! Are 10 minute pop and go ents a good use of the PMs time?

This blog is turning into a ‘wailing wall’.
Put your complaints to the organizers of the event.

Unfair, “wailing wall”?! she’s handicapped cummon. This is a legit concern/comment and you have demeaned her constructive input with your unfair statement.

Right on, these are legitimate comments. Besides the organizers undoubtedly read this blog and now are so informed.

A special Council meeting at 4:00pm on Monday July 4 will consider allowing homeless people to continue camping in Cobourg’s Parks.  If you are concerned, email one or more councillors.  Their email addresses are available here  The agenda for the meeting is here.