According to Lucas Cleveland, Market and Smør is giving the Cobourg community what they asked for – a greengrocer focused on local, fresh food.  When they came to Cobourg and before they could open a store to do that, Lucas and Montana took over the beach canteen with the idea of providing healthier snacks.  Per their business principle of listening to their customers, they found that French Fries etc were wanted; so these were included in their offerings. For their new store, a survey told them that customers want “local” more than they want organic so “local” is the focus – although 20% of their product is certified organic. Lucas said that many local farmers grow organically but can’t afford certification so it seems to me that their organic offering is more than 20%.

I noted that although all items are fresh, not all are local (nobody grows bananas around here). As well there are other food items for sale in direct response to requests from individuals in the community – one example is that he has some Kimchi which is a traditional Korean dish of fermented vegetables.

Owners Lucas Cleveland and Montana Desjardin moved to Cobourg in December 2016 but finding a good location for their store was harder than expected.  The one they settled on at 39 King Street East had been a pub and restaurant so had a commercial kitchen but otherwise needed a lot of renovation.  Lucas did most of the work himself and credits the landlord with great support and said that he went “above and beyond”.  The store is European style with a good size but there’s room for expansion in the back.  At some future point, the kitchen will be used to produce smoothies and similar healthy products.   But Lucas said that they would not be rushing – expansion would be slow and gradual.

Valentine’s day, February 14, 2019 was opening day after more than two years getting ready.  It looked busy to me with lots of people buying and not just looking.

Below are some photos of the store. 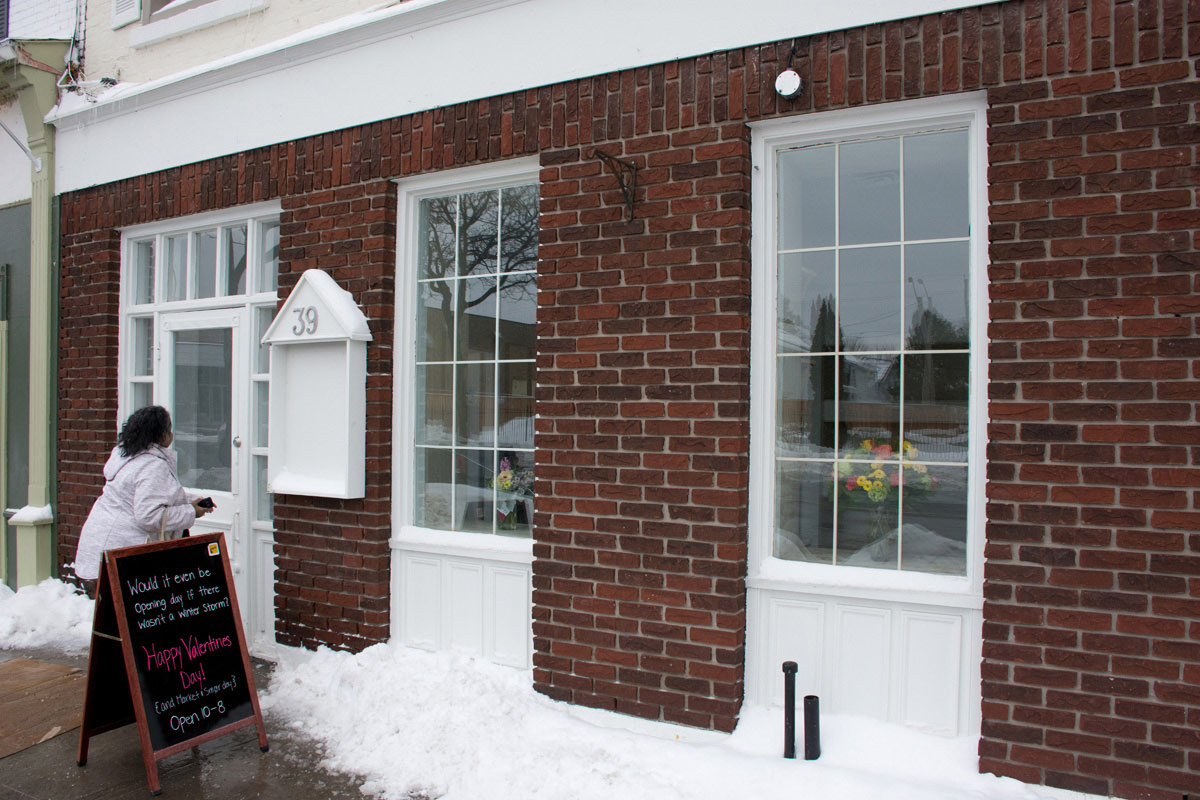 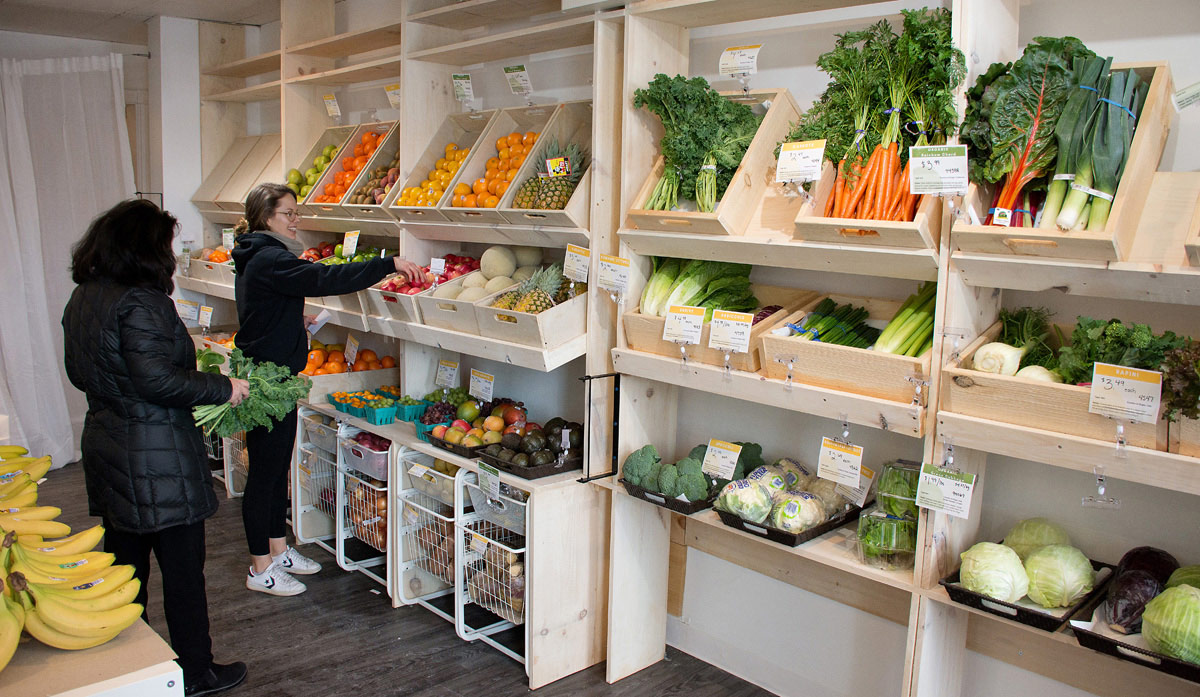 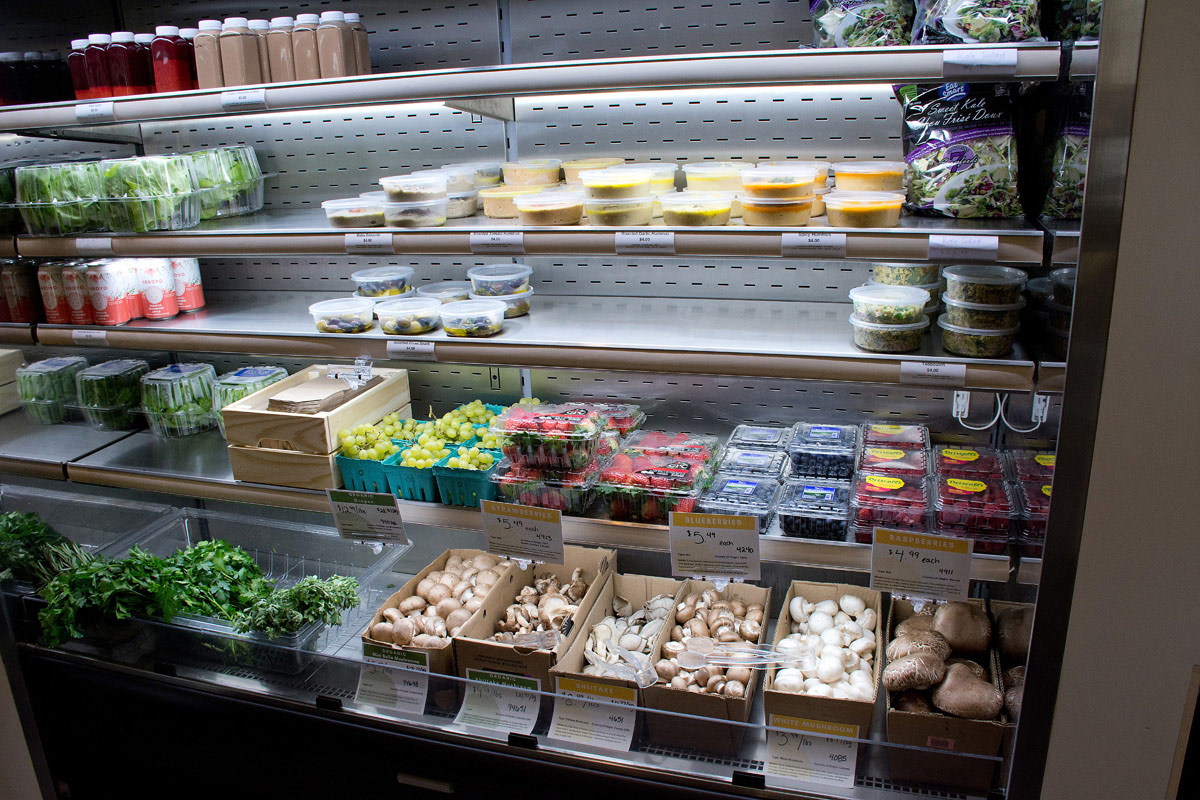 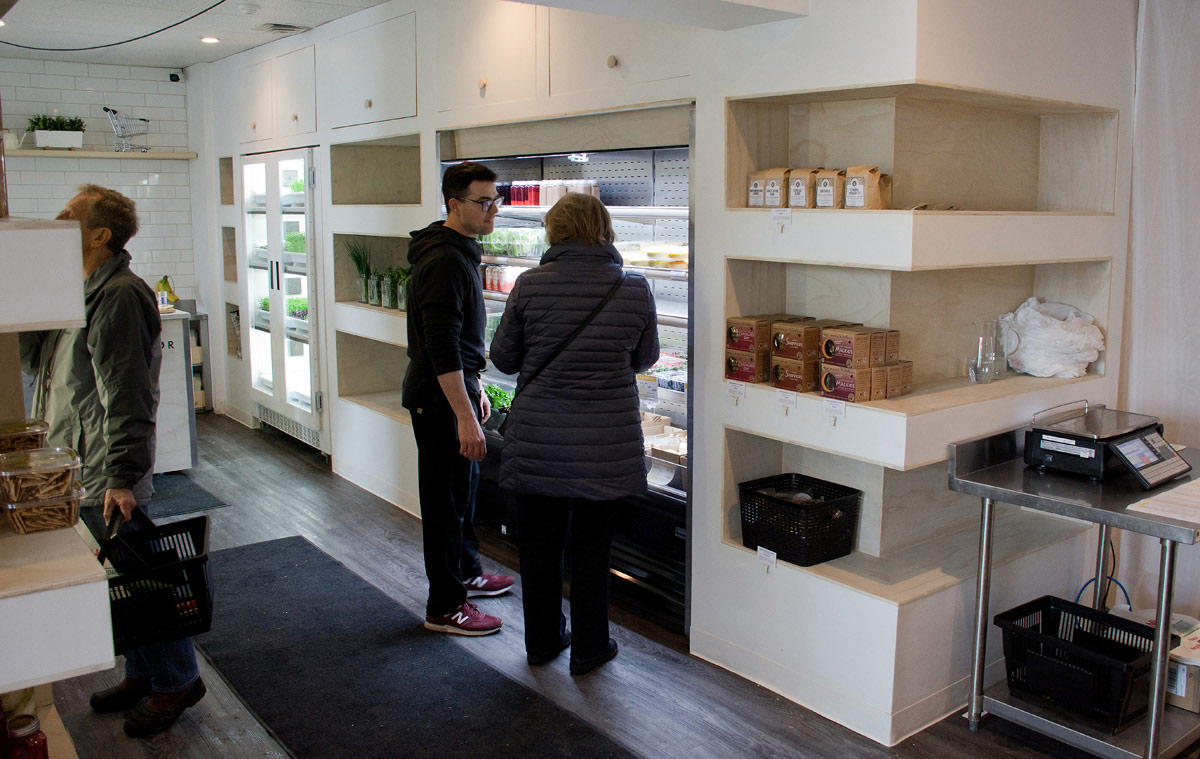 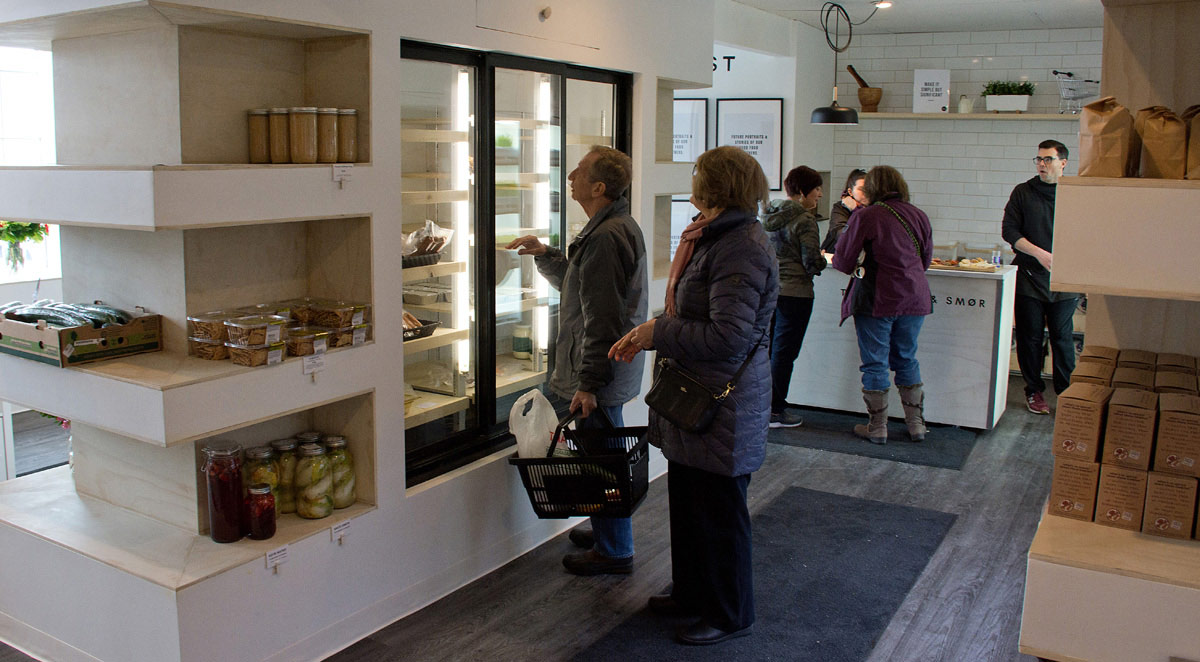 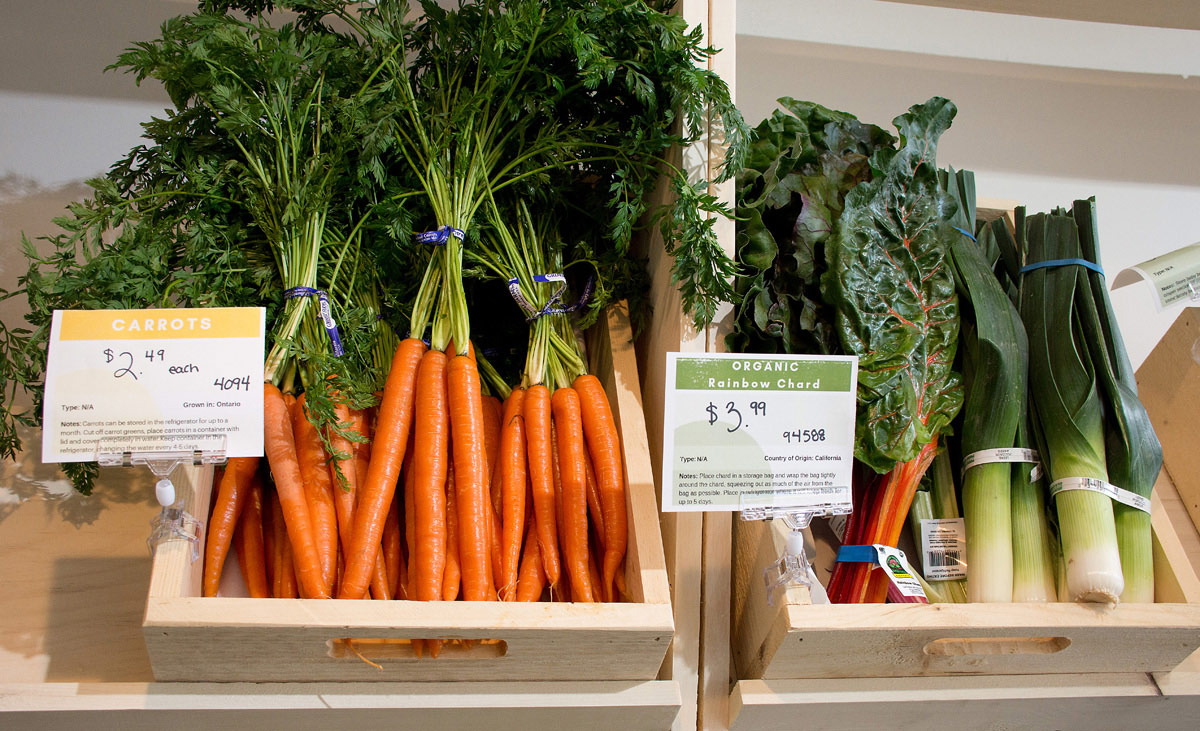 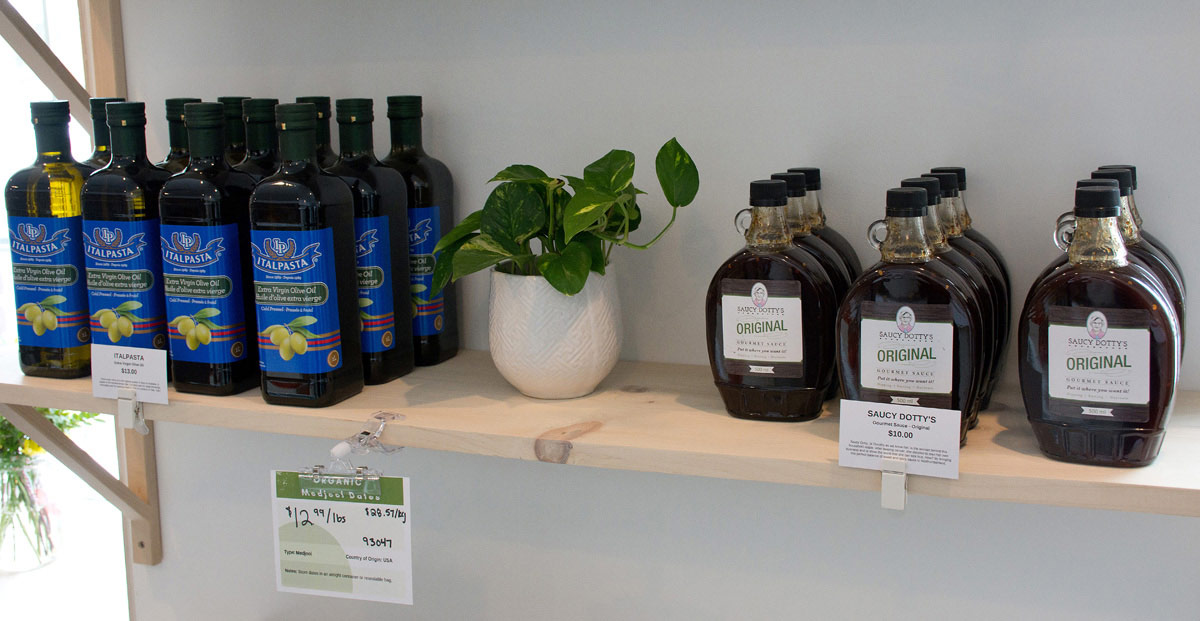 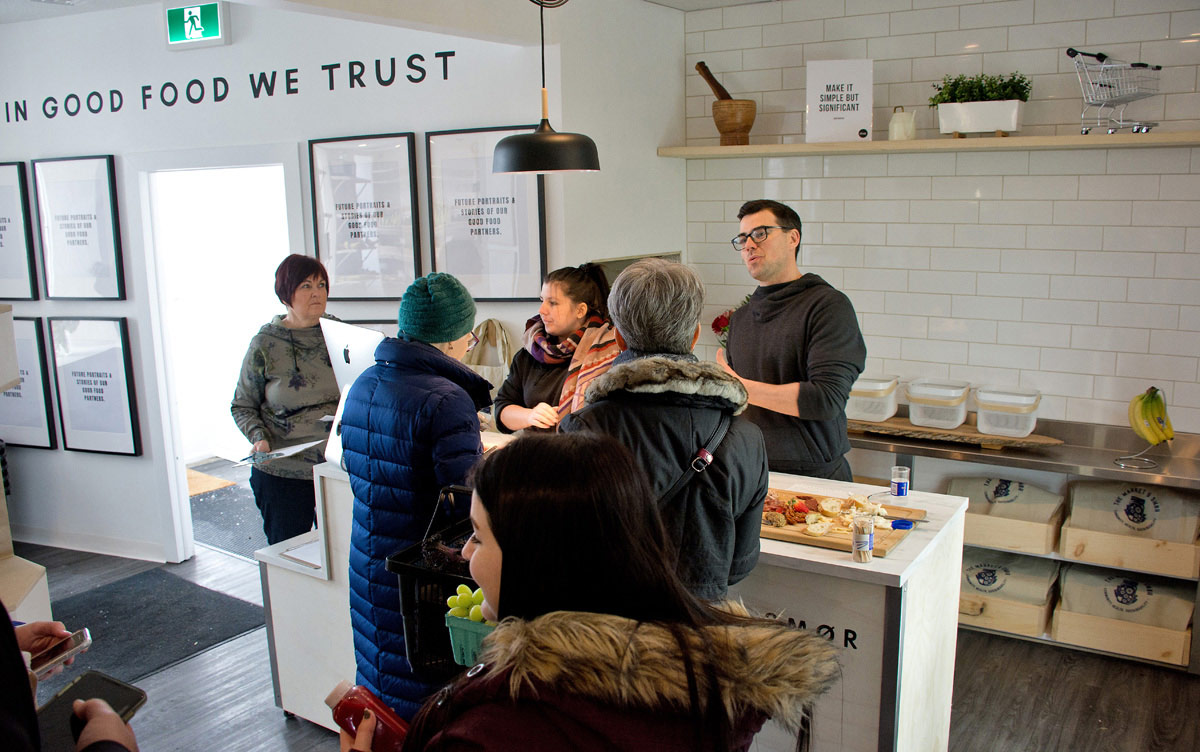 I’m looking forward to visiting the new shop. I really appreciated the social media hype the owners created through their regular pic and vid updates….downtown needs more of this investment of personal energy, utilization of available technology platforms, enthusiasm and passion. This will be a great location to service tourists and residents alike, in particular those who live in the east and within walking distance. Personally I’m still a Burnham Family Market guy but I love this addition to our community.

I have been three times in four days! I Loved that I can pick up one item I needed to make salsa ( one jalapeno) without fighting the crazies in the No Frills parking lot!Today I was out walking and stopped into buy an apple to eat to help me get to my 10,000 steps! I love that it is clean and bright and the atmosphere is friendly yet casual.I have been waiting for a long time for something like this in Cobourg!

wow – they have kimchee – cannot wait to visit the store- now if only the busy ticketers would bre less diligent – that would surely help these two folks as well as others on the street – has anyone taken a survey with the merchants regarding the meters – dear lord they have to pay topark their own business vehicles – shame on council.

6
-3
Frenchy
Reply to  concerned for all

Merchants and staff should be parking well away from any spots close to their establishments. Save those spots for, you know… CUSTOMERS!

We agree and we are happy to report that the entire Market team parks in designated spots so that every spot that could be available to customers is.

I had a wonderful shopping experience this morning at Market & Smør! A great selection of fresh organic produce as well as meats and Beyond the Meat vegetarian burgers, looking forward to trying them for the first time. The store was buzzing with lots of shoppers and the Draper affect was in full force…John so many people commented that they had just read your blog and they had to come to see for themselves! And to those who just sit back and lament that the downtown core is dying, and don’t support the local shops, stop in to Market & Smør, it’s great addition to our Town!

This is a fabulous store. The vegetables are SO fresh. I will be shopping there as much as I can. Love the passion!

Fabulous go-to destination for our town. Tell your friends. This hard-working team have finally brought their vision to life. Hot tip. If you like hummus your in luck. I bought the best garlic hummus there I have ever tasted!

Looks fabulous. A facility of this nature, downtown is long overdue. I wish this young entrepreneurial couple the best of success.