The Cannabis facility occupying the old Kraft plant is owned and operated by FV Pharma Inc. a wholly owned subsidiary of FSD Pharma Inc.   In March 2018, FV Pharma signed a joint venture with Auxly (originally Cannabis Wheaton) to provide finance to FV Pharma in return for streaming rights to 49.9% of the product that was grown in the facility – but this agreement has now been terminated.  It is not known what the financial penalty might be to FV Pharma.  Work on the expansion of the facility was supposed to be completed by December 2018 but has still not been completed.  Information is limited but it seems that FSD Pharma is in turmoil.  CEO Rupert Haynes has been “terminated” and replaced with Dr. Raza Bokhari, Executive Co-Chairman.  As far as can be determined, Thomas Fairfull is still the CEO of FV Pharma which runs the Cobourg plant.

One noticeable change over the last several months is that the focus of FSD Pharma has become medical uses of Cannabis as distinct from recreational.

But the termination of the joint Venture brings other concerns.  Auxly was to provide $50M in finance as well as management assistance for the first phase of an expansion to a 220,000 square foot self-contained cultivation facility.  Currently only 25,000 sq. ft. is operational (photo at right).  So far, Auxly has advanced $7.5M of the $50M – it is not known where the balance will now come from.

Auxly explained the termination of the agreement in a Press Release:

In the course of the Company’s efforts to advance the JV Facility Development, it identified contractual breaches relating to FSD Pharma’s management and staffing obligations of the JV Facility, as well as significant concerns regarding certain aspects of the buildings’ infrastructure. On January 17, 2019, the Company provided notice to FSD Pharma of such breaches in the hopes that FSD Pharma would work with the Company toward a resolution. To the Company’s disappointment, FSD Pharma failed to remedy its breaches and instead purported to terminate the Agreement effective February 6, 2019. The Company subsequently terminated the Agreement effective February 7, 2019. The Company reserves all of its rights under the Agreement.

It does not look good although FSD Pharma remains upbeat with the statement that: “The Board believes the Company has unique and invaluable assets and is taking appropriate actions that will support long-term positive cash flow and shareholder value.” (They trade with the ticker HUGE – priced at around 28 – 30 cents).

There are also other changes to personnel – FSD Pharma announced that a headhunter has been hired to “assist with the search for a pharmaceutical executive and other senior executives to lead FSD Pharma’s pharmaceutical business practices.”

Operational Update
To optimize operations, FSD’s Board of Directors terminated a definitive agreement with Auxly Cannabis Group Inc. (“Auxly”) on February 6th, 2019. FSD believes that Auxly was under clear obligation to develop all aspects of the company’s cannabis cultivation facility in mutually agreed upon staged phases. Auxly had made commitments anticipating that the first phase of construction would be completed and ready for Health Canada approval by the end of December 2018 which never materialized.

Dr. Raza Bokhari said: “We have a clear plan moving forward to build a global retail and medicinal cannabis footprint. We intend to continue our 220,000 phase 1 building expansion and are assessing different opportunities with other potential strategic partners and construction companies including utilizing our cash, securities and other assets on hand to continue progressing forward. We will update investors as soon as possible and only upon signing of definitive agreements. We will continue to optimize our 25,000 square foot licensed cultivation area adding high value varietals, while utilizing best practices in the latest agricultural science. We are making good progress with the much-anticipated sales license and we have a strong cash and asset position with no debt.

“Acquisition of a platform company to advance R&D of synthetic and biosynthetic cannabinoids to commercial FDA approved drugs worldwide remains our ‘flagship’ strategy,” said Dr. Raza Bokhari. “We are confident that we will soon identify a suitable and compelling platform to execute on our strategic intent. We were disappointed that the intended acquisition of Therapix Biosciences did not materialize but are at the cusp of unlocking tremendous opportunities for the FDA approved application of synthetic and biosynthetic cannabinoids to address a variety of unmet needs in diseases of the central nervous system, sleep disorders, skin conditions, and to generate alternative treatment options to opioid based therapies.”

Shareholder Update
Shareholders of FSD Pharma met in a special meeting on January 22nd, 2019 and authorized the Board of Directors to consolidate class B shares and take additional steps that will enable the company to list on a major US securities exchange. The FSD Pharma Board is actively engaged in evaluating the appropriate exchange and the optimum time to do so.

The Company believes these are transformational times for the medicinal cannabis industry and for FSD Pharma shareholders, employees, and stakeholders.

Good to see everyone throwing their support behind a start up company that struggled during one of the worst year ending for stock markets around the world, caused by the politics of bickering world leaders. If the end of 2018 had been like 2017 FSD would be sitting at $4-6 a share with everyone laughing and cheering the new jobs but no…….like true Canadians we wait until a potential source of jobs and revenue is on the ground, struggling and then we start kicking it in the head. Congratulations Cobourg………first you lose the cheese company and the over 300 jobs and now the marijuana. You should be in there helping FSD to succeed but no….you’d rather jeer and mock a potential Canadian winner. How American of you.

There’s been way too much turmoil at the company since summer of 2018. FSD can’t seem to find sure footing on their strategy. In addition, the stink from the Auxly and Rupert Haynes terminations is pretty heavy. I don’t think either will go away quietly, meaning costly lawsuits, less cash to invest in growth. Raza Bokhari doesn’t have good reviews on Glassdoor with his other companies and interestingly enough, the turmoil started right around when he joined the board.

From the flood of information about FSD Pharma, some tidbits:
– asbestos had to be removed from the building – should be a surprise to former employees of Kraft
– the construction permit required to continue with the build out was not issued until days before Christmas 2018 – what would be the reasons for delaying the permit
– Rupert Haynes hired from Britain as CEO end of November – fired in February. That was quick.
‘Overall, the divorce between Auxly Cannabis and FSD Pharma has just begun. In the following days, its likely that negotiations will occur between the two firms as they determine a go forward path – i.e., financial penalties that FSD will be subject to, Auxly’s recuperation of committed funds, and ownership of goods and materials.
During the time being its unlikely contractors will be on site, or that progress will be made on the construction of the facility. This will only add to the delay FSD Pharma will see in obtaining revenues, and hamper the cash position of the company as a whole.
The success of the company hinges on the coming days, and how smoothly the joint venture can be dissolved in order for FSD Pharma to determine its future path to success.’ The Deep Dive

and then there appears to be a new development, a new deal struck with Pharmastrip Corp, as announced on Feb 7. Maybe the recent spate of eulogies is somewhat premature after all.
(Sources: FSD Pharma Inc announcement as reported on www. newswire.ca ‘Cision’)

The whole things gone to pot…. 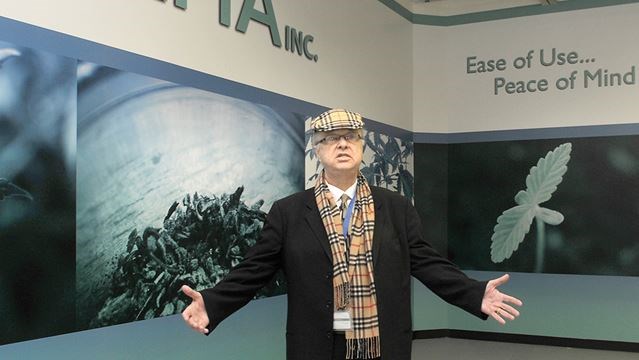 Oh dear!
That is a bombshell for Cobourg!
Some of us had hoped that FSD Pharma would bring well-paying jobs, industrial assessment to take the load off residential taxpayers and a boost to Cobourg’s ‘sleepy’ image.
After all, FSD Pharma would be an ‘industry of the future’ – a world beater getting in on the ground floor opened by Canada’s legalization of recreational cannabis!
To be sure, the cannabis industry will be in turmoil for some time with lots of mergers and shake-outs.
So let us hope that FSD Pharma can find the financing to carry on with its plans to become ‘the world’s largest hydroponic producer’.

And to think that just a mere 24 hours ago you were still drinking, and trying to pass around, the “kool aid”.

…and those hats, they might become collector items …some day…
oh, the ins and outs of that wacky-tobaccy keep things abuzz for sure

Yeah and it would be really a belly laugh if they went belly up soon.
Sighs