Not only are Christmas lights now in Victoria Park but they are also magnificent in Rotary park. In his speech to the large crowd in front of the bandshell, Mayor John Henderson said “we listened – you said you wanted lights in Victoria Park so that’s what we did”.  The details were decided by a citizen’s committee set up for the purpose last January after Bruce Moore made a presentation to Council on the subject (see links below). And once again, Cobourg showed it knows how to party and somehow, everyone in Cobourg showed up – well not really but it seemed that way – I’d guess there were close to a thousand people in Victoria Park, including lots of families. It was more than just a “turning on of the lights” ceremony.

At around 6:00 pm on Friday, November 22, people started gathering in front of Victoria Hall where they were entertained by carol singers from VOS and Northumberland Players. We waited till around 6:30 when the greetings and “thank you’s” started with MC York Bell-Smith, Town Crier Mandy Robinson, MPP David Piccini and Councillor Adam Bureau (photo – above-right). Most of the councillors were there but didn’t make speeches.  At around 6:40, a countdown led to the lights being turned on at Victoria hall and Rotary Park (see photos below). This year Victoria Hall has a lot more decoration than usual with Town Maintenance staff busy putting together their “Winter Wonderland”.

Once those lights were on, everyone made their way to Victoria Park. Many went down Second Street and passed a good number of vendors selling a range of items. They will be there until 5:00 pm Saturday. In addition, anyone bringing a non-perishable food item for the Northumberland Fare Share Food Bank got a lighted candle from the Cobourg Police Service. Somewhere amongst it all, Habitat for Humanity  were distributing gingerbread cookie kits to children. Also, two horse drawn carriages were providing rides.

As people arrived at the Bandshell in a dark Victoria park, they were greeted by more carol singers (Northumberland Orchestra and Choir) while waiting for everyone to arrive. At around 7:15, the Mayor gave his short speech and with a countdown, all the lights in Victoria Park were also turned on.  This year, 30,000 lights were added making a total of 180,000. Santa was there for the kids and once the lights were on, festive music was played.  At the north end of the park, the Salvation army band was also playing Christmas music.

And the weather cooperated – cold, but the wind was not as bad as earlier in the day.

The lights will be on from now until February 2020 from 6 pm until 10 pm – with a couple of exceptions because of Netflix filming the 10th and final episode for the season of Ginny & Georgia: 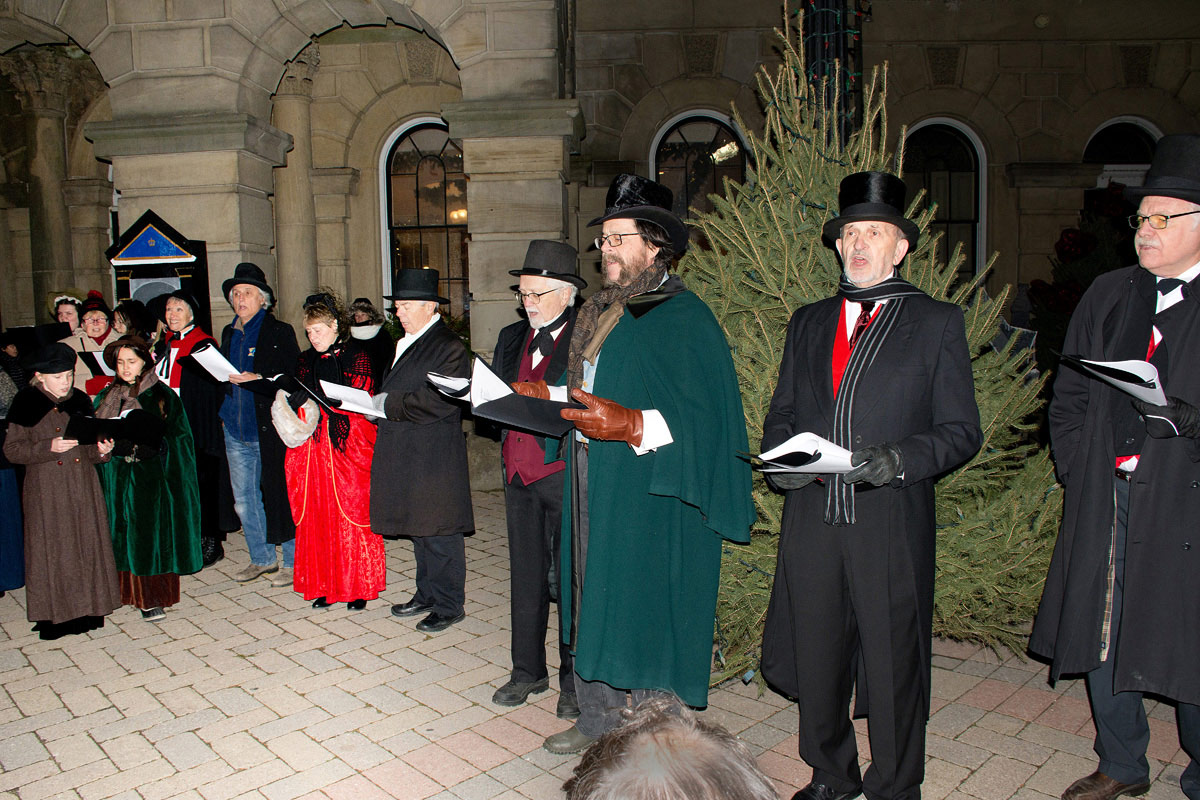 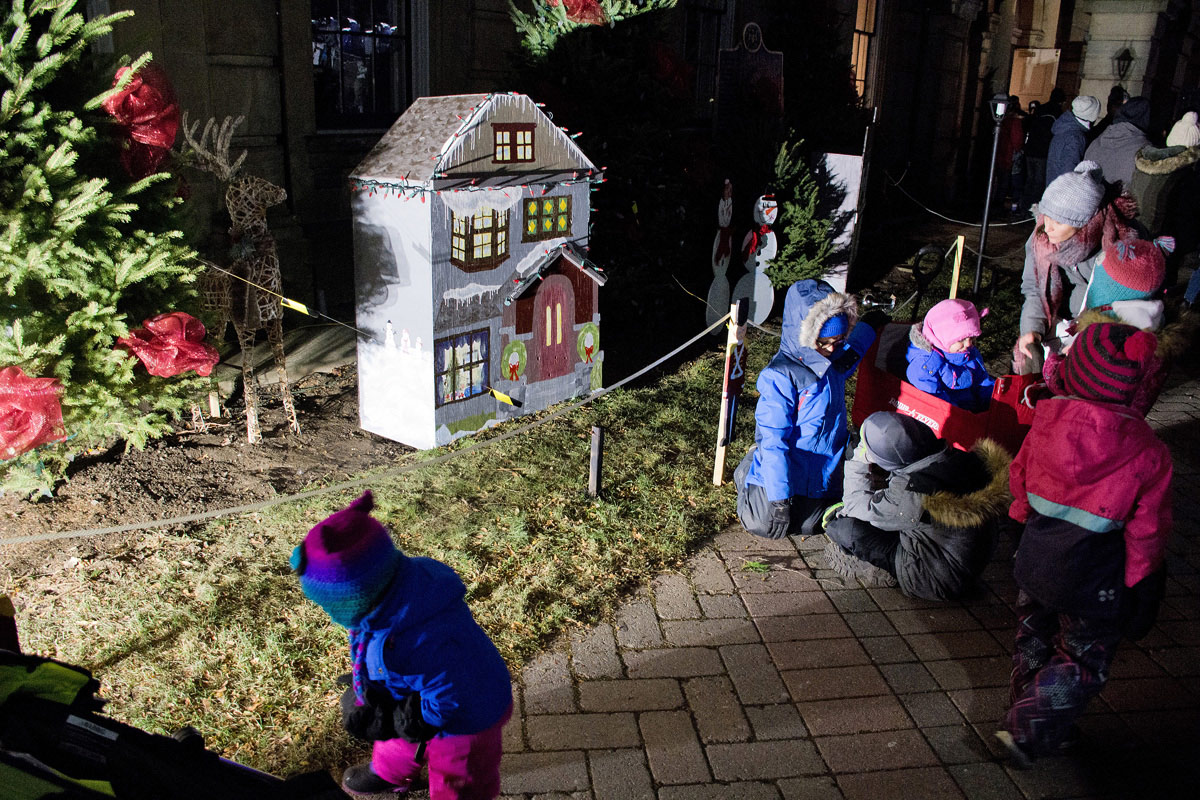 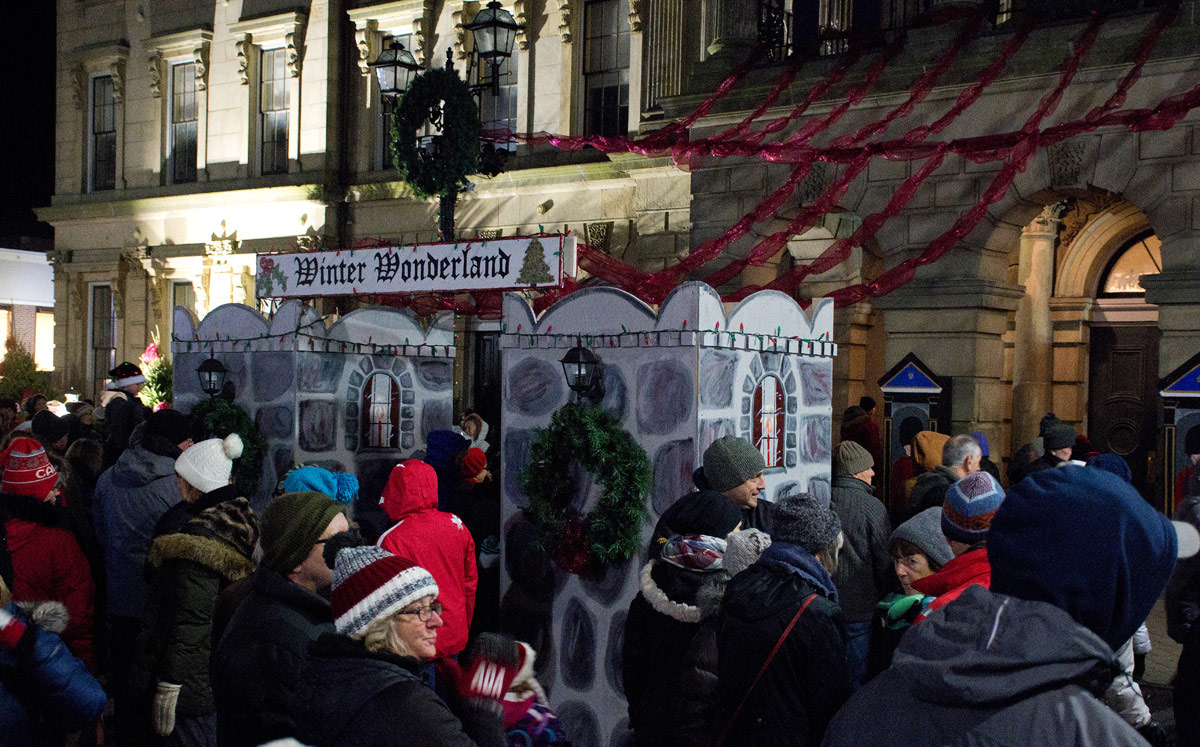 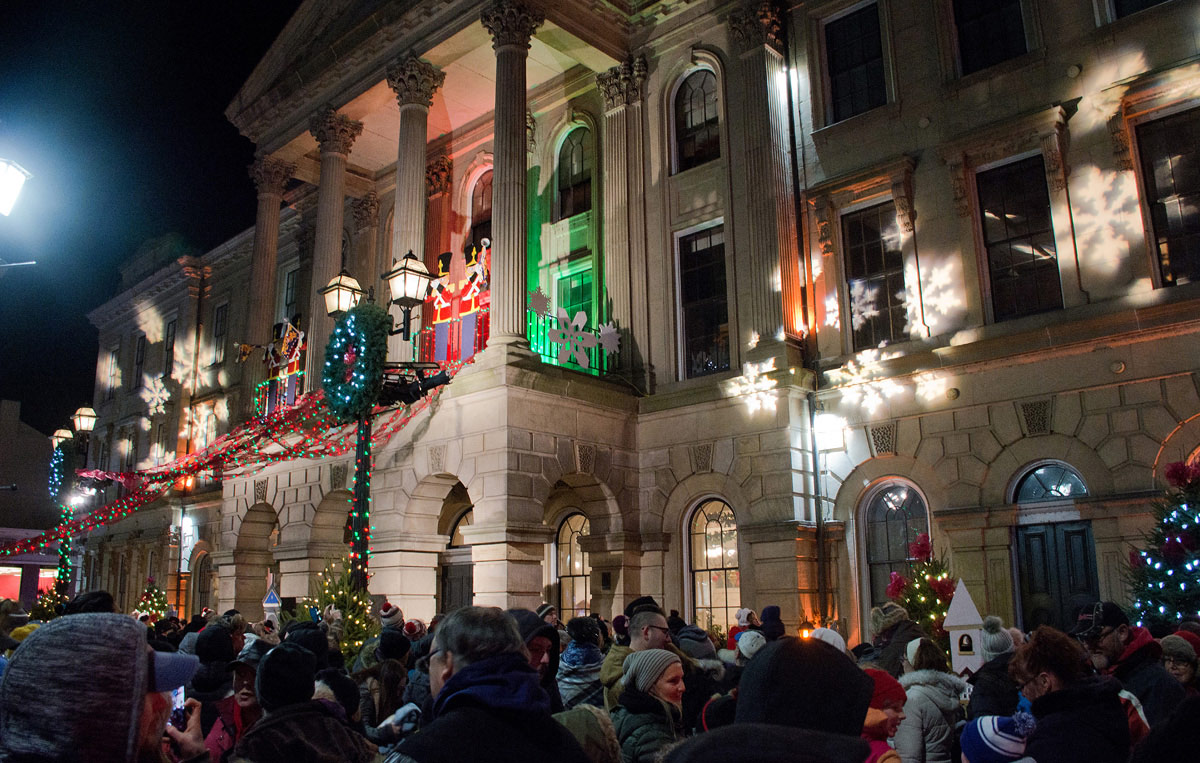 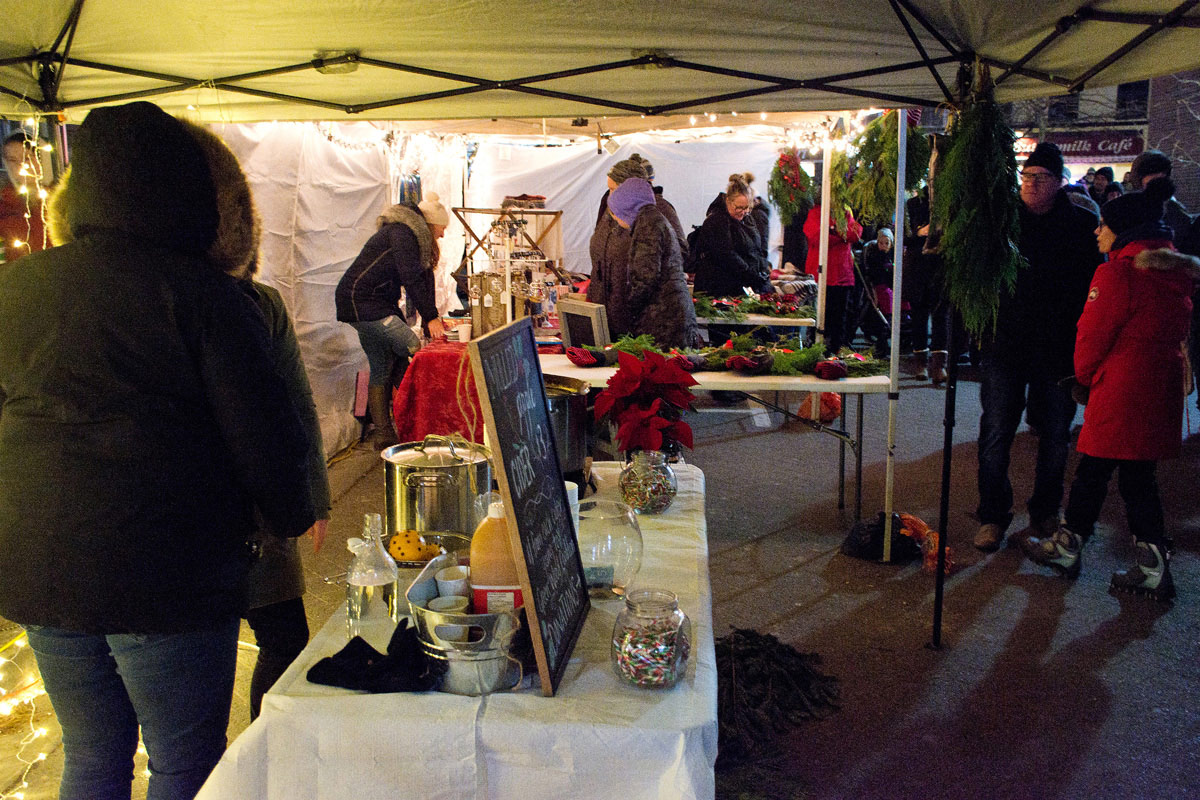 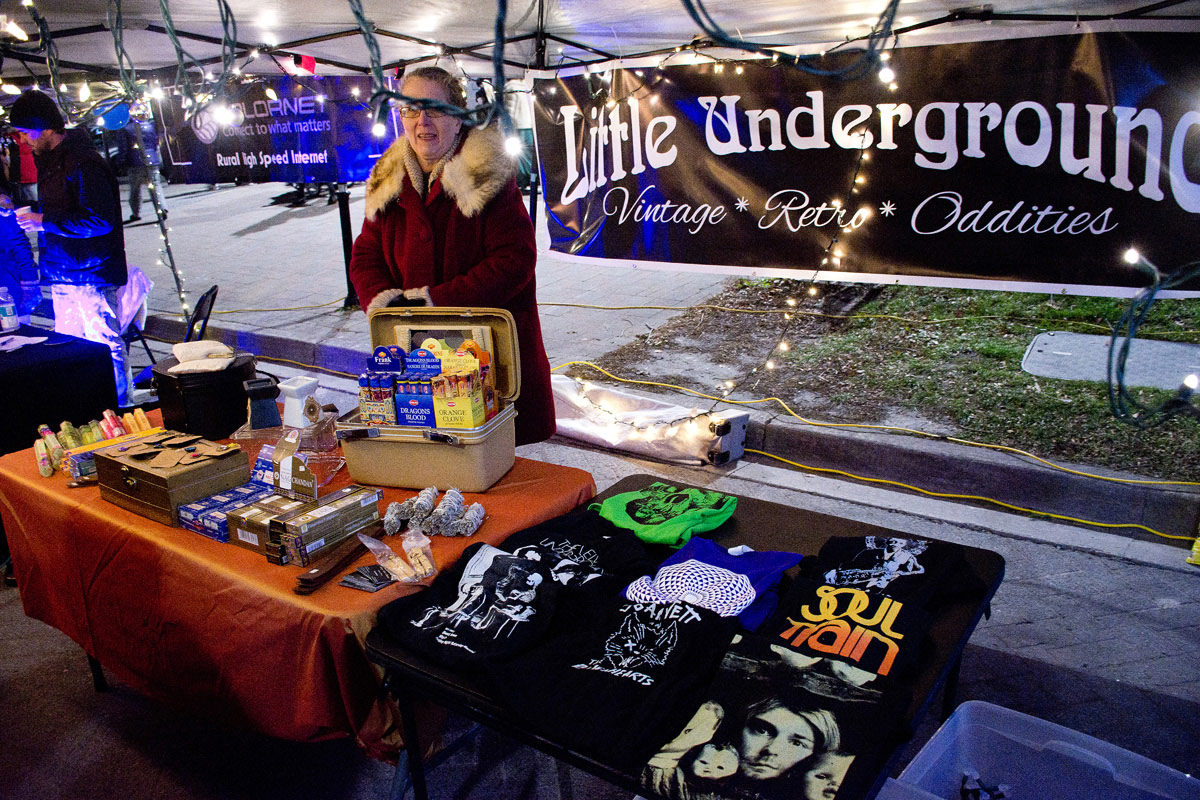 Another Vendor on Second Street 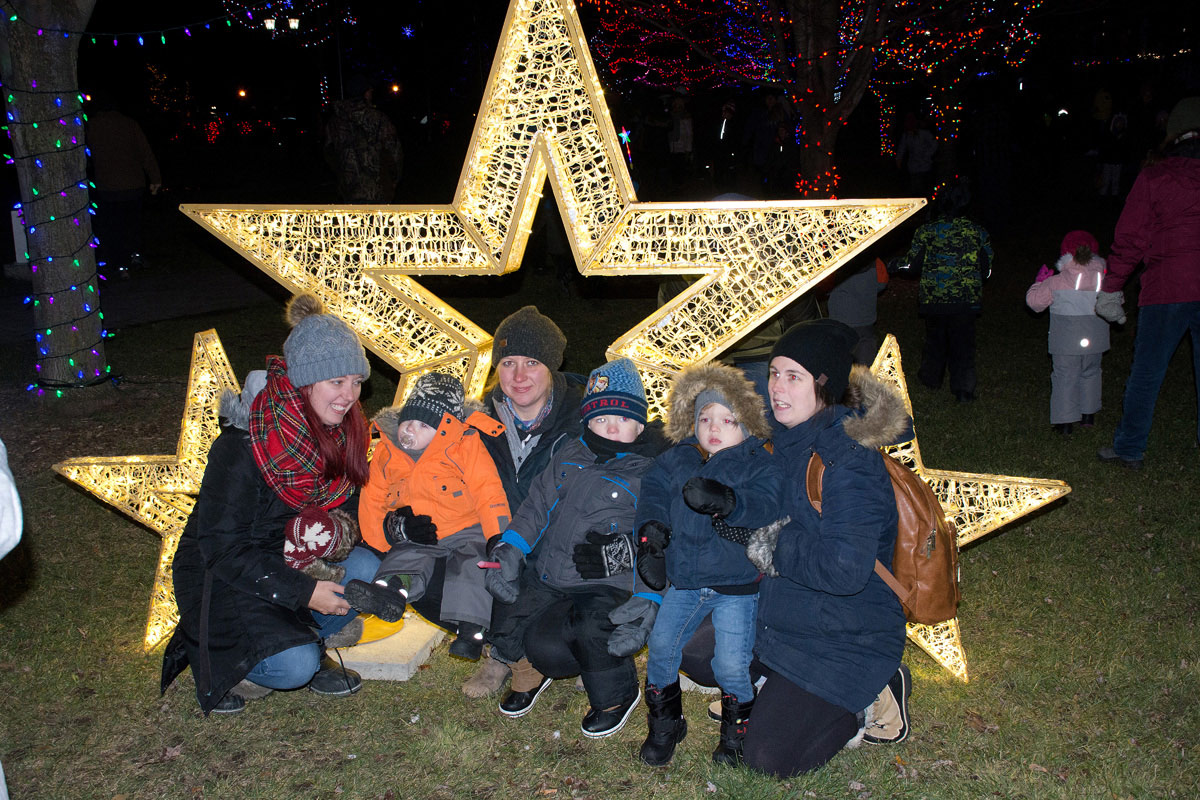 Photo op with kids and parents 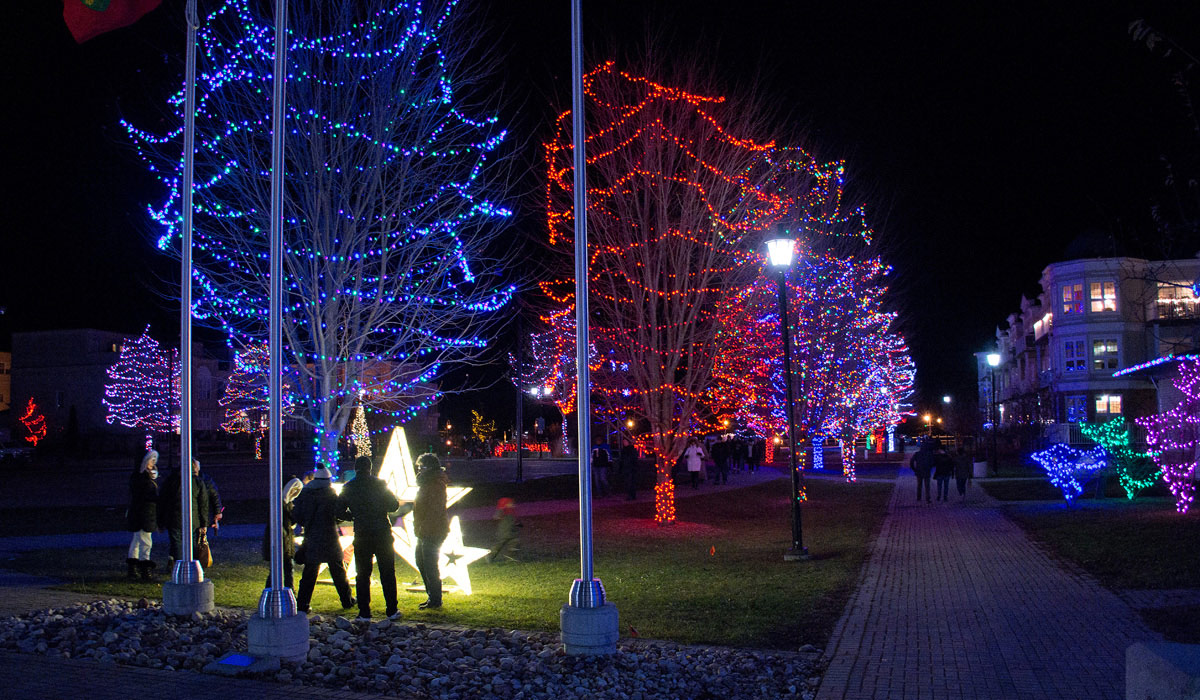 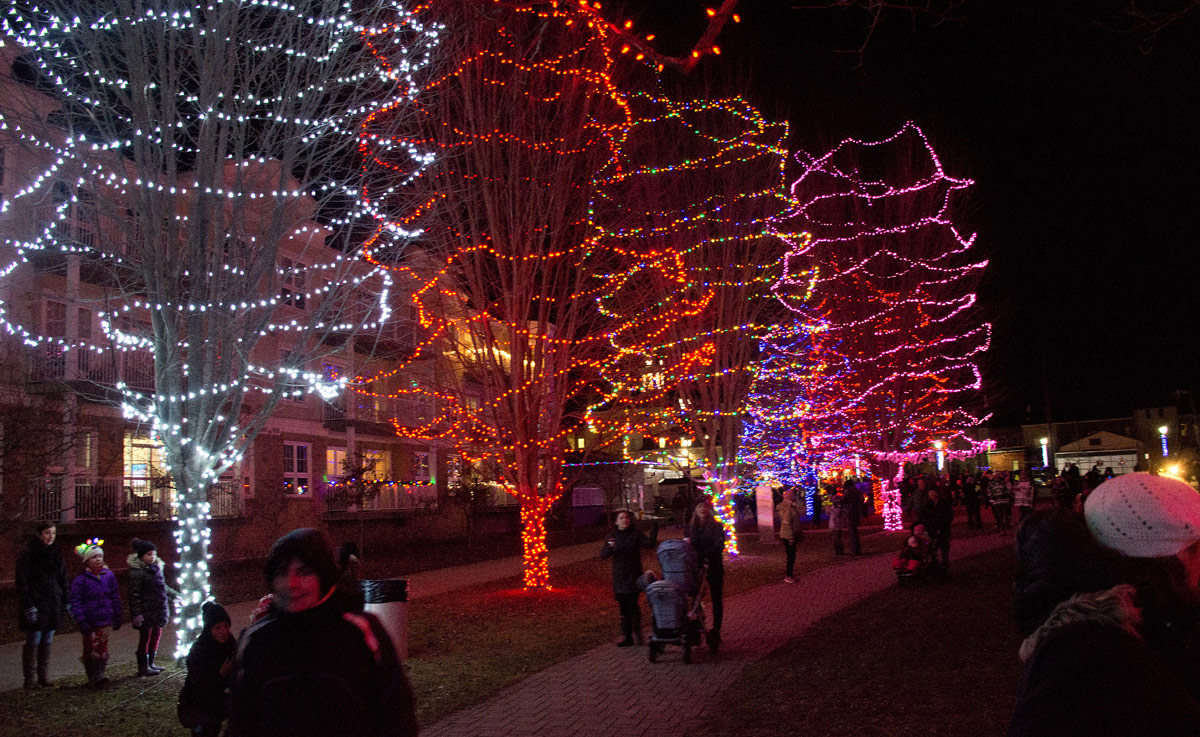 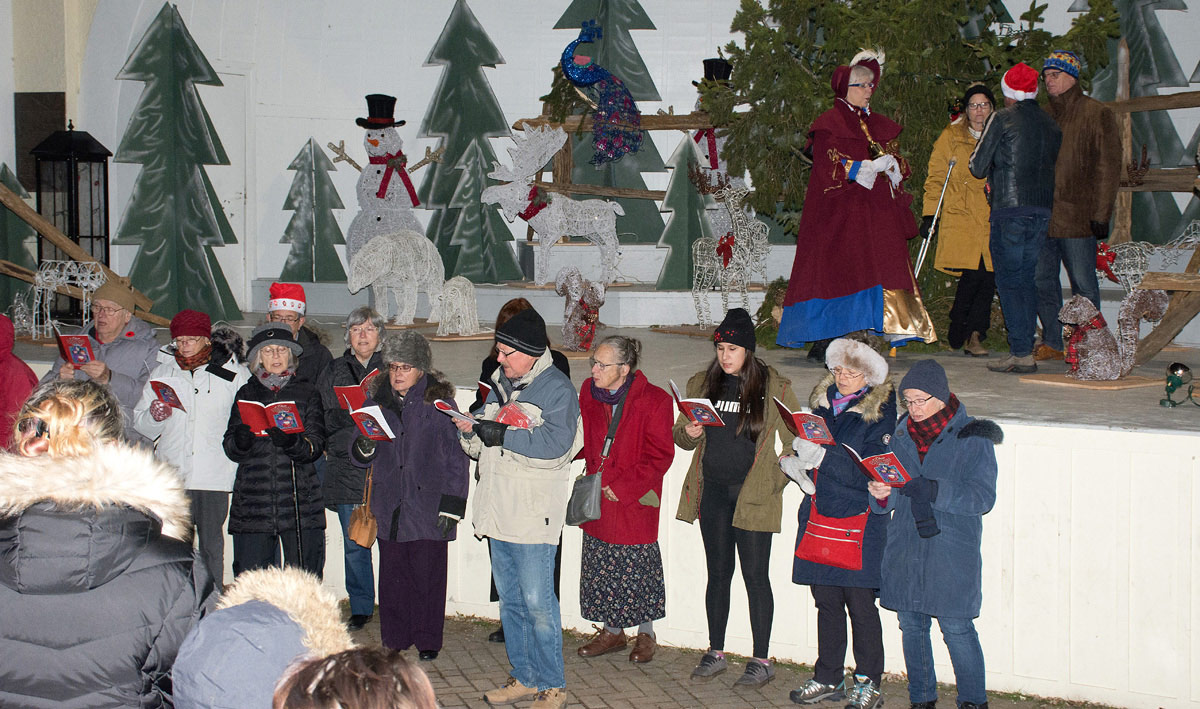 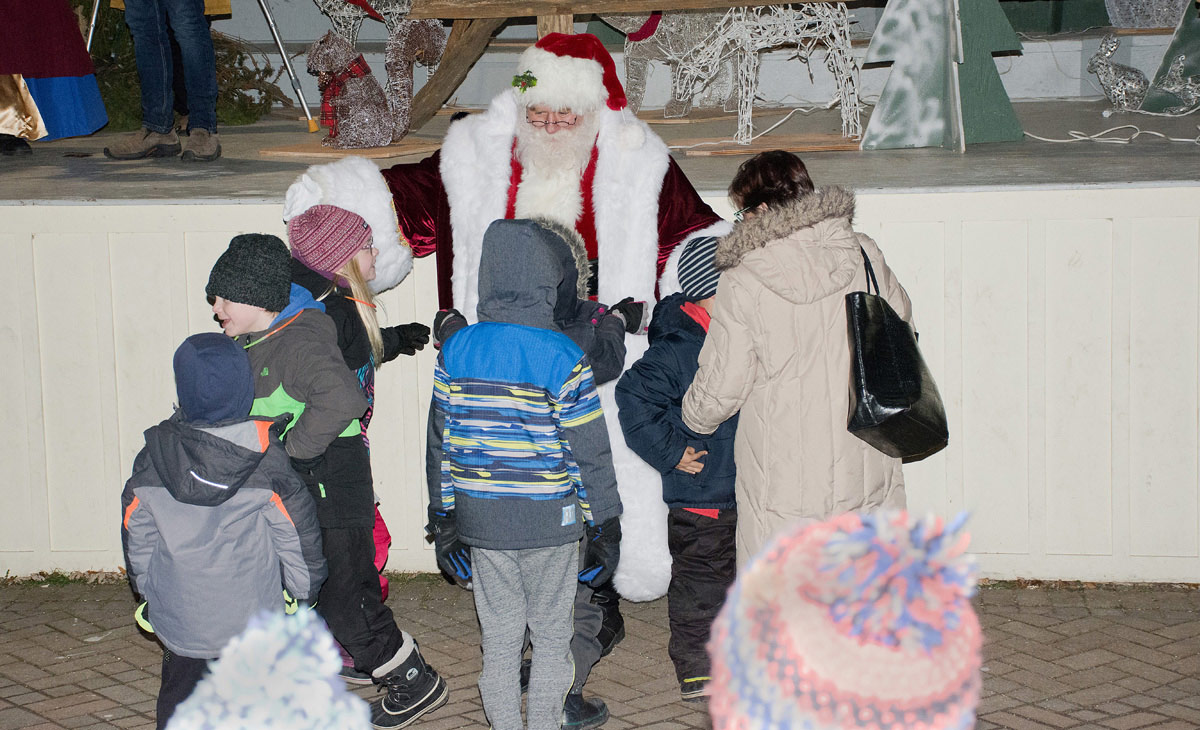 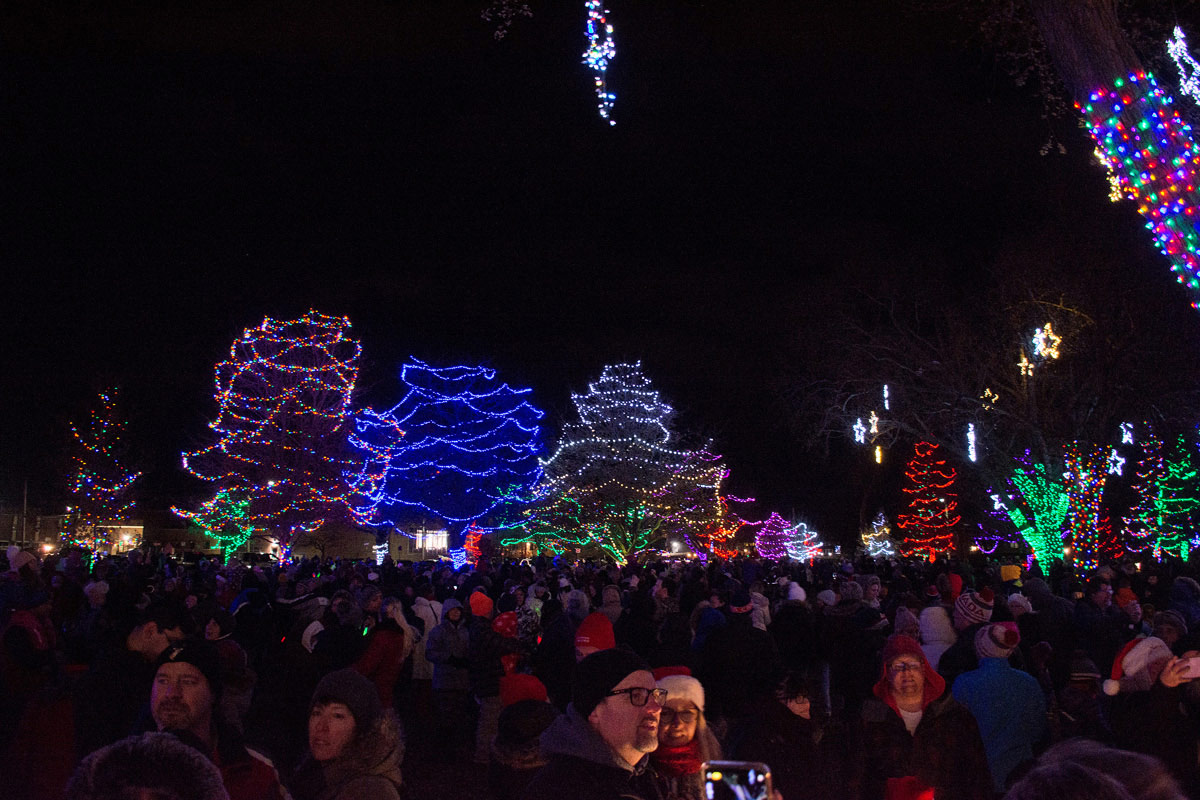 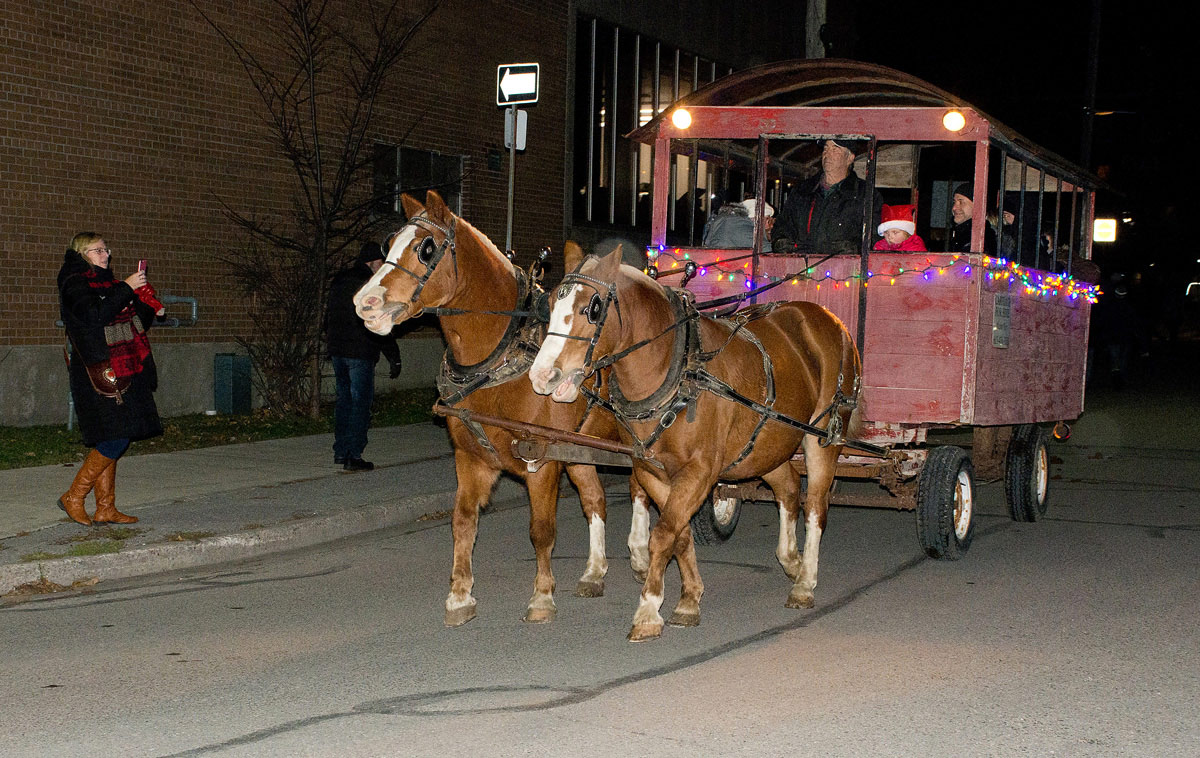 One of two horse-drawn carts 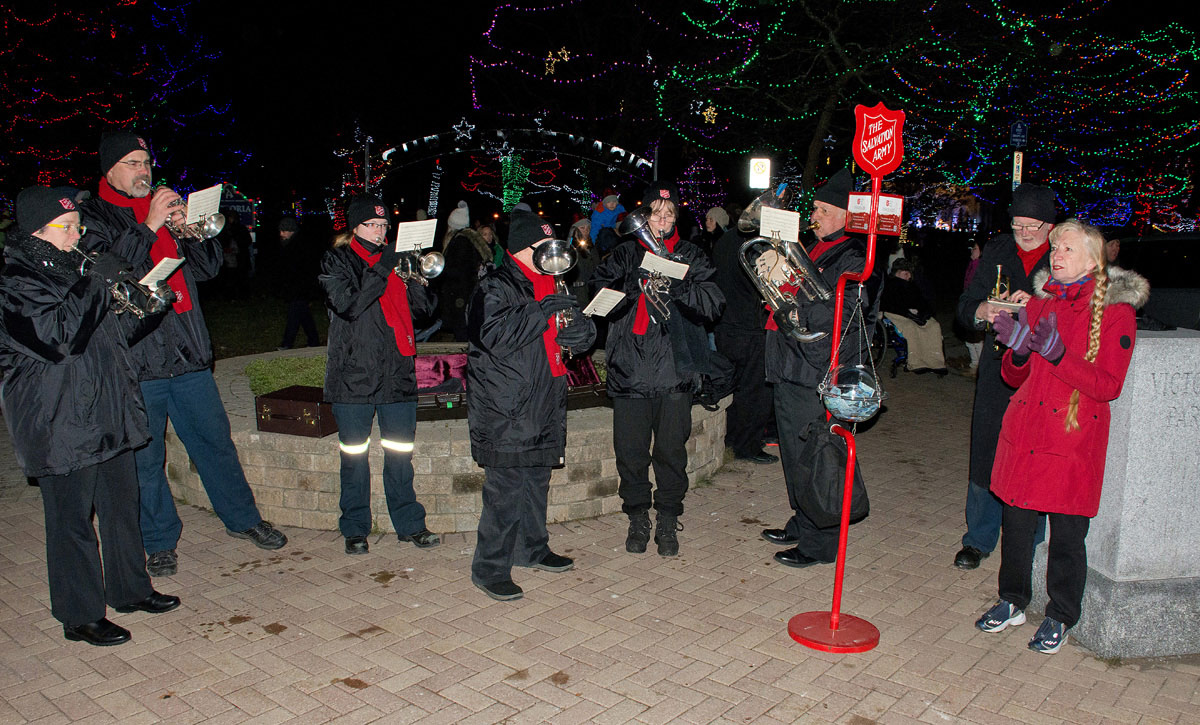 Great Greta and her local admirers would approve of the majority of Germans wishing to decrease or eliminate Christmas lights in order to, get a load of this, Save The Planet. https://www.dw.com/en/climate-change-majority-of-germans-support-ditching-christmas-lights/a-51576565

Wally, I agree. It is unconscionable that Cobourg has completely unnecessary Christmas lights in the midst of a climate change emergency. Council could partially mitigate the harmful CO2 emissions by not powering the lights for the remainder of this year. Cobourgians must get used to freezing in the dark to meet our Paris obligations. It is incredible that some advocate installing even MORE lights. The money saved by not installing ANY lights next Christmas will partially fund the consultant who is preparing our recently mandated sustainability master plan.

Lets complete the job by extending the light display in the park to king st.

I believe they did announce that more lights would be added in the next coming years.

Socialism is not compatable with Christianity.
It is obvious that traditional Christmas has been largely replaced by tinsel and secular humanist fund drive$.

It’s by far the best revenue raising time of the year…. so, maybe that should be the title of a new carol to be sung at the band shell?
How about replacing Jesus in the manger with a baby Karl Marx in an elf hat? That would be quaint.

If you think traditional Christmas has been replaced, maybe you should go to church. If instead you mean to say that towns and cities that are non-religious explicitly are non-religious, that’s just extremely basic civics.

Be sure not to get charity confused with humanism. Two very different things. One very good, one very bad, from a Christian perspective.
My post speaks for itself, but let me go further…
I think you are missing the point. It’s not about going to church, or not going.
The holiday , derived from the term holyday, has been coopted by secular humanism and its inherint materialism. That is obvious and undeniable. Hence the fairly widespread use of the appeal “keep Christ in Christmas”
Secular humanism is a religion of its own. Its a case of one religion being imposed on another, or one exploiting another, is more accurate, thus contradicting your “extremely basic civics” argument. Secular humanism is a religIon that denies Christ.
*Note my post below.*
I know it is politically incorrect but my post relies on democratic principle as well, because the majority of people would prefer a more traditional Christmas as opposed to the crass materialism and fund raising event that Christmas has become.
Btw, I love Christmas, especially its traditions. Christmas tradition and it’s very foundation is worth saving. Most everyone would agree, and, ironically, its a God given basic human right to practise the religion of your choosing.
Freedom?
Despite wide spread misconception…
‘Separation of church and state’ was intended to prevent the government from imposing a religion on the people, and definitely NOT for any government to banish any religion from public.

But the December 25th date for Christmas was itself co-opted by early Christians from ancient pagan celebrations of the winter solstice. They stole somebody else’s celebration for themselves.
“Let he who is without sin cast the first stone”.

That is immaterial.
But anyhow, the point is lost on many and counterproductive.
So in the spirit of Christmas…
Merry Christmas to everyone.

The fascists got along with the Church quite well.
Anyway, there is nothing Christian about putting lights on trees.

What glorious pictures of a special evening, it is unfortunate that such a colourful evening could not be combined
with the Santa Claus parade, one feels it loses so much in daylight instead of being after dark when all the downtown lights would be glowing. as the parade went by. How about next year?

Cobourg is not like Mayberry anymore. The town spending money to attract Toronto city dwellers but it does not improve the town. Cobourg had jobs that paid living wages for young families but now is more like a retirement community.

Hey Max, maybe you should join ‘no matter’ and leave town. Don’t let the door hit you on the way out.

What sort of a citizen responds to very legitimate criticism made by another citizen, in that manner?
Thats not neighbourly – or, ironically, Mayberrly.

What we realy don’t need is a bunch of sad sacks telling us how crappy our town is. I love Cobourg, dislike whiners.

To that person who refers to Cobourg as a dump: thank goodness you live elsewhere!

Fabulous! How can you beat this. A great coming together – adults, kids, strollers, dogs, wagon rides – and such a huge crowd. It was truly Christmas Magic in Cobourg. Well done, everyone who brought us this memorable evening.

I have to agree, a better sound system for the singers – but then who would have thought the crowd would be so large and stretch so far along King Street. Might I also suggest for next year, a string of lights down Second Street, and along the harbour and into Victoria Park.

I am like a kid – can’t wait for next year’s presentation.

I agree for the most part, but those unpainted plywood wagons could use a decent upgrade beyond just stringing a few lights around the edges.

No Nativity Scenes? I haven’t seen any sign of Christ in Victoria Park this century in the Christmas lights display, or am I wrong? I haven’t looked lately.

One assumes plenty of Nativity scenes at the christian Churches in town. The Corporation of the Town of Cobourg is and should be secular.

Will the mayor wish me “Merry Christmas” in public?

I don’t know if the Mayor is a practicing Christian, but assuming he is, why wouldn’t he wish you a Merry Christmas?

It doesn’t get much better -A true community celebration! We are incredibly lucky to have such a dedicated town council and staff who listen and are working non-stop to make Cobourg the best place to call home in southern Ontario. Don’t tell anyone LOL!

Hi
Thank you for all the work Adam and his staff and volunteers did for this years
Christmas event. Good to see the council members and David Piccini our MPP.
Where was Phillip Lawrence ourMP

I sure hope so. The anti-Canadian dictator is ruining Canada.

Ditto that thank you! To all who helped make it happen and a special thank you to the …
“The Christmas Magic Ad Hoc Committee (CMAHC), the committee is composed of Bruce Moore, Ron Hyatt, Julie McCuaig, Jane Frost, Dale Randall and Rosella Cornaviera with Councillors Adam Bureau and Emily Chorley plus non-voting staff members.”

Not to mention the folks that actually put the lights up, in nice weather and foul.

It was a lovely evening and very well attended. Nice to see the lights back in Victoria Park. My only complaint was that it was very hard to hear the speakers and choir unless you were standing close to them. Perhaps in the future a better sound system could be used which could include more speakers and a microphone for the choir.

It is wonderful that so many could enjoy the lights and music. We now have a “climate crisis” so I assume that Cobourg will eliminate the lights in coming years in order to reduce GHG to meet our Paris commitments.