For the first time, a citizenship ceremony was held on Friday in Cobourg.  Although Cobourg hosted the event and organizing it was partially by Northumberland County, the 38 participants were from a number of places and not just the county.  County CAO Jennifer Moore said that it helped to showcase the County and Mayor John Henderson said he was pleased to be participating in the event held in Cobourg’s Victoria Hall.  Previous M.P. Paul Macklin, Warden Bob Crate and Mayor John Henderson gave speeches welcoming the new Canadians. Councillors Adam Bureau, Nicole Beatty and Emily Chorley were amongst the guests.  There were no children participating in the ceremony although there were several as guests.  I understand that children of new Canadians do not automatically become citizens – they must apply separately.

The ceremony was led by a Citizenship judge who spoke mostly in English but occasionally in French.  He said that he came originally from Pakistan with his parents at the age of 15. He said that the 38 participants were from 27 countries.  He led the new citizens in their oath of allegiance with their right hands raised.  It was first in French, then in English.

I swear (or affirm) that I will be faithful and bear true allegiance to Her Majesty Queen Elizabeth the Second, Queen of Canada, Her Heirs and Successors, and that I will faithfully observe the laws of Canada, and fulfil my duties as a Canadian citizen.

He finished with “Congratulations, you are now Canadian Citizens”.  They then all came forward to receive their certificates plus a flag from Paul Macklin, a Town of Cobourg pin from Mayor Henderson and a citizenship pin from Warden Crate.  They signed their certificates witnessed by Government of Canada employees and were told they could apply for a passport in 2 business days.

In his speech, Mayor John Henderson first acknowledged the Councillors in the room and County CAO Jennifer Moore.  He said that many saw Canada as being a place with Mounties, Maple Syrup, Hockey and Poutine but he said that our values include being kind and polite and we also value multiculturalism and a diverse community.

After the speeches, the Concert Band of Cobourg (also known as the Royal Marines) marched in and led the crowd in the National anthem.

The event was expecting 50 participants but only 38 turned up.

Other citizenship ceremonies have been held in the County recently: Port Hope, June 2019 and June 2016; Colborne July 2017.

After the ceremony, many new Canadians posed for photos with the dignitaries and then had some of the cake provided – see the photos below. 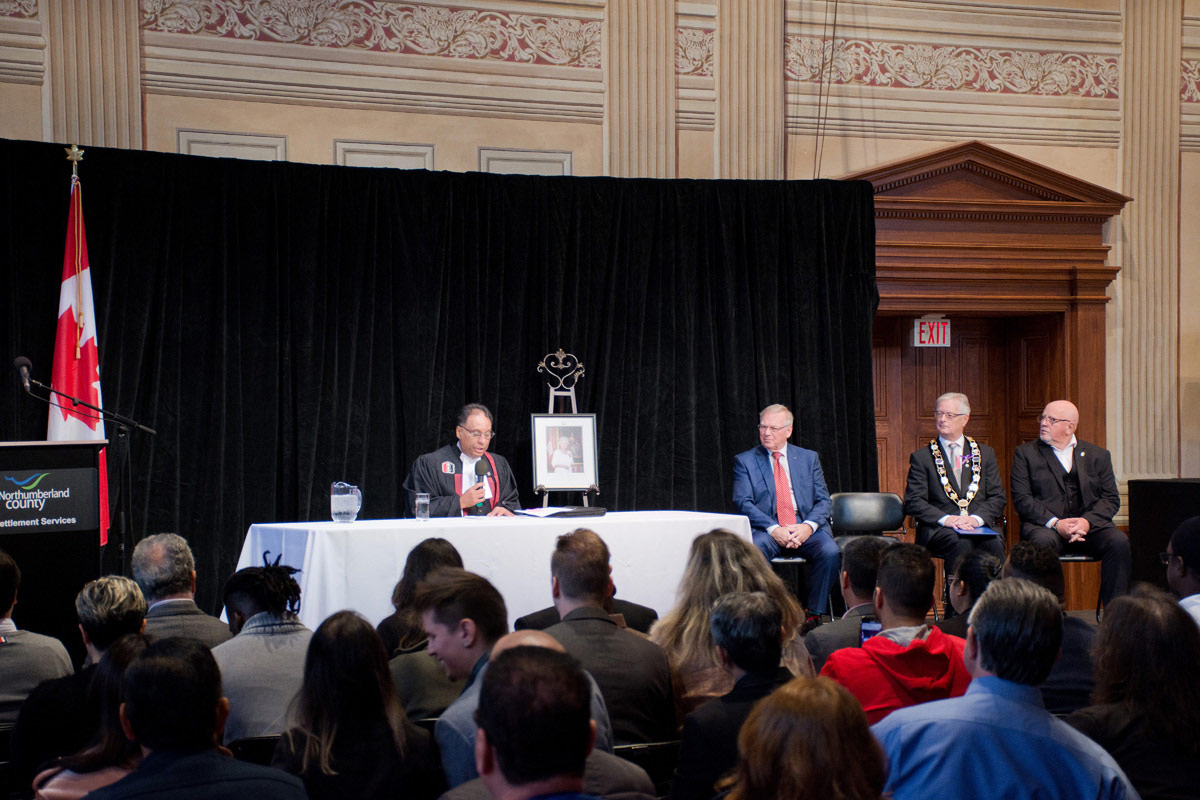 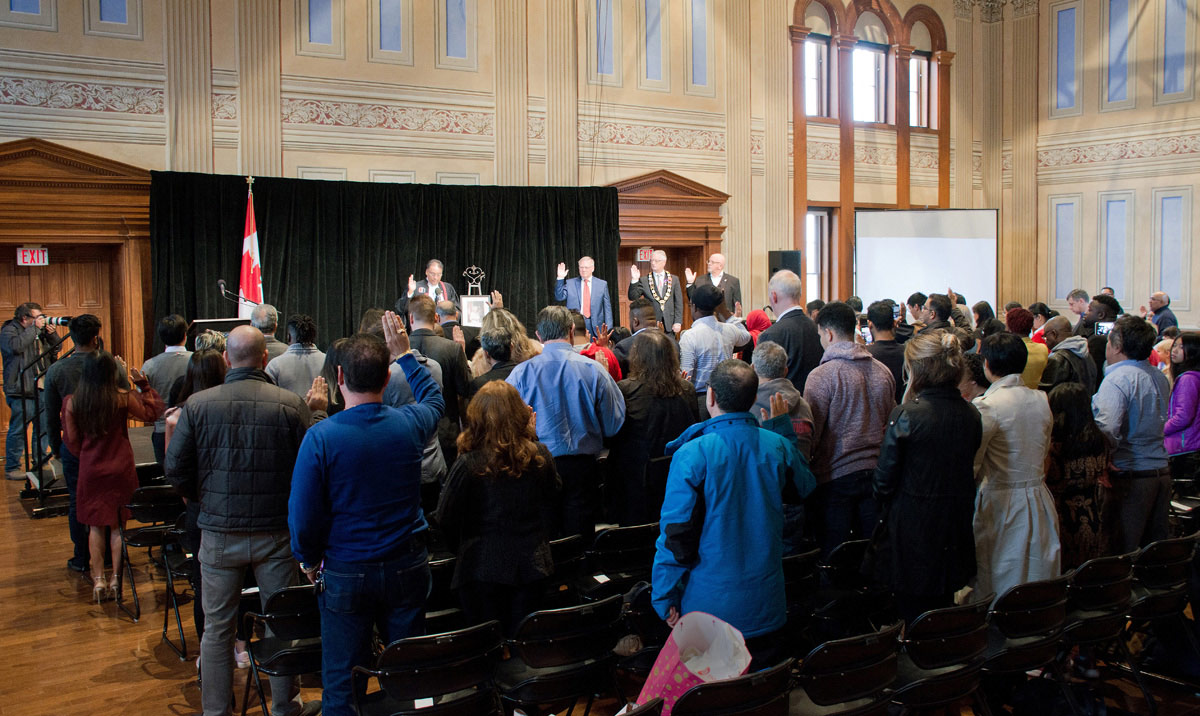 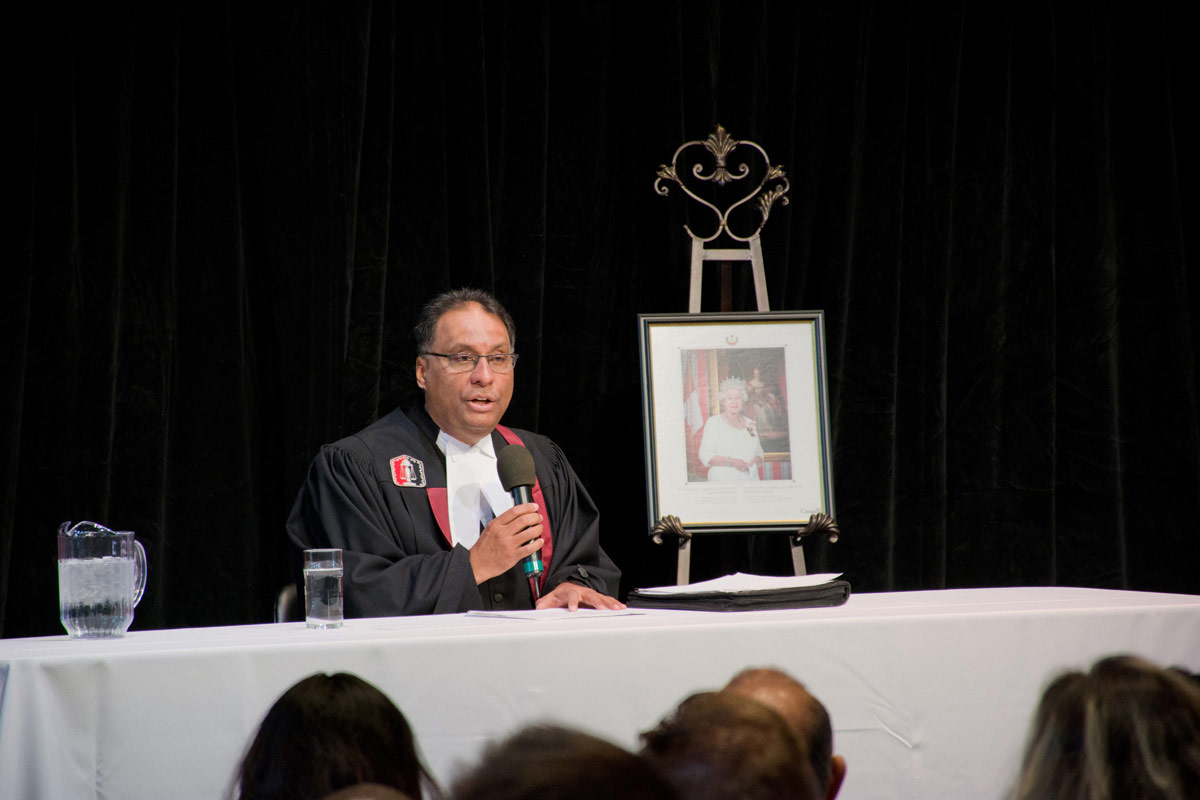 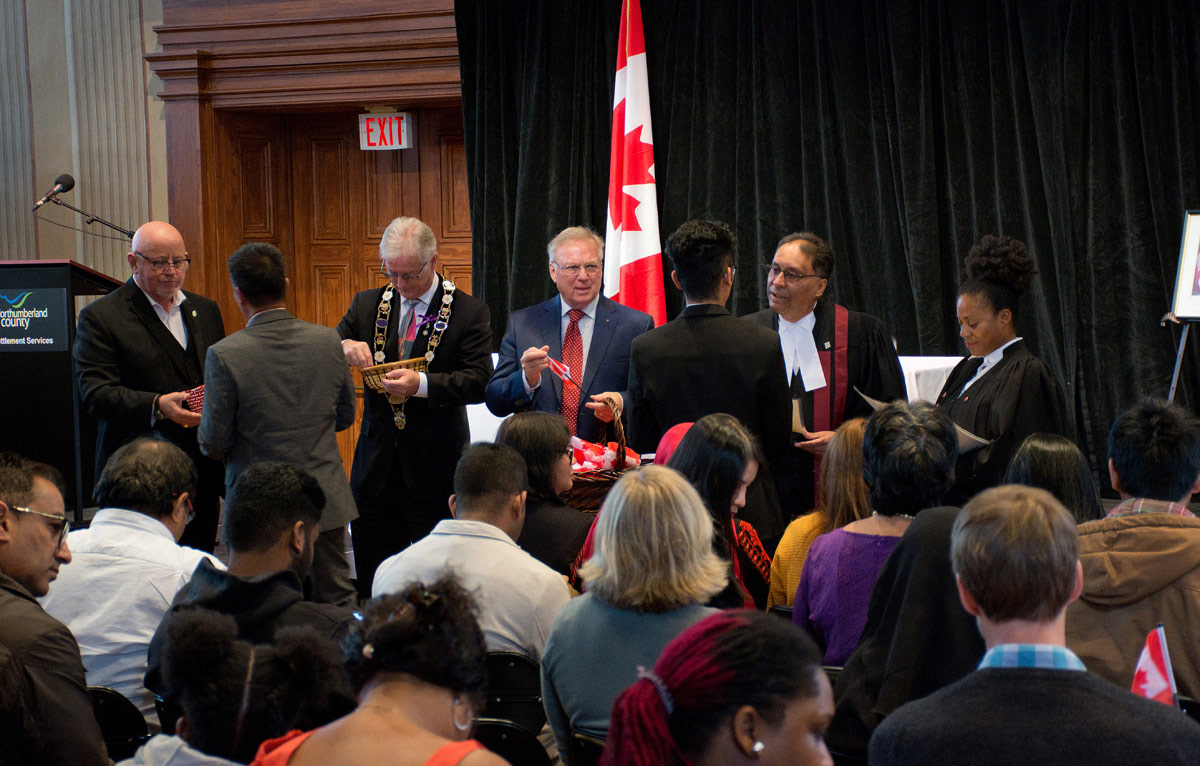 Handing out certificates, flags and pins 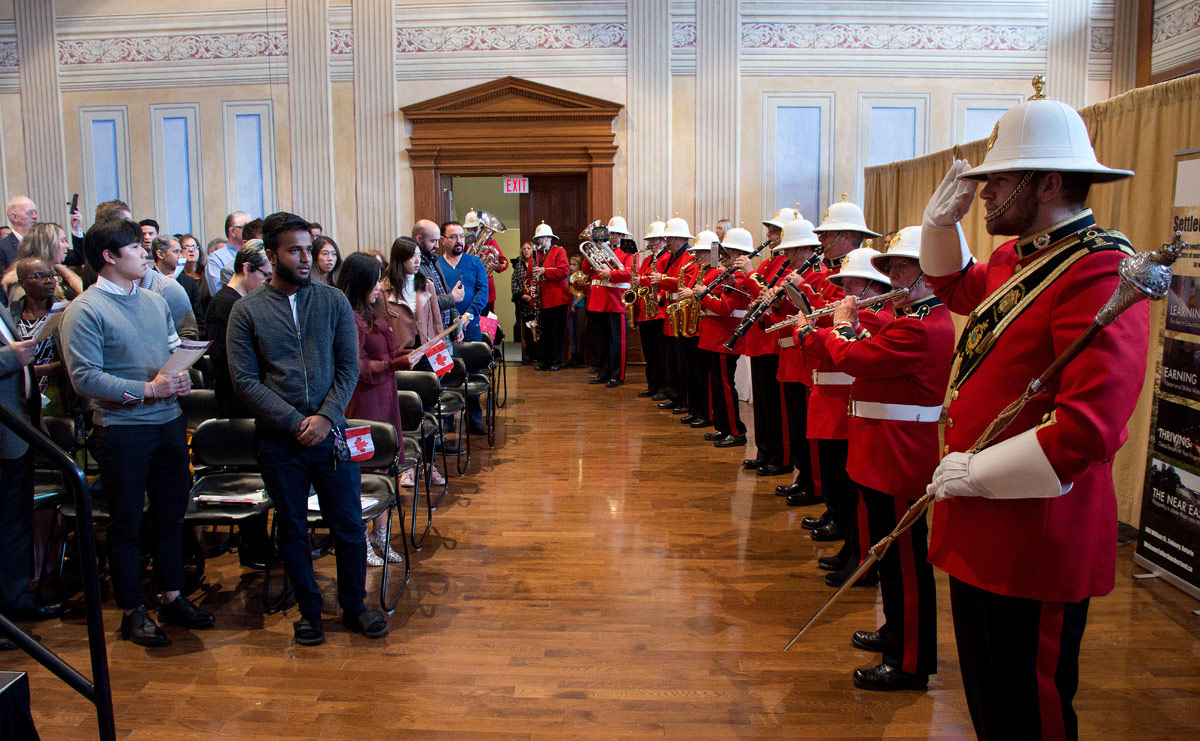 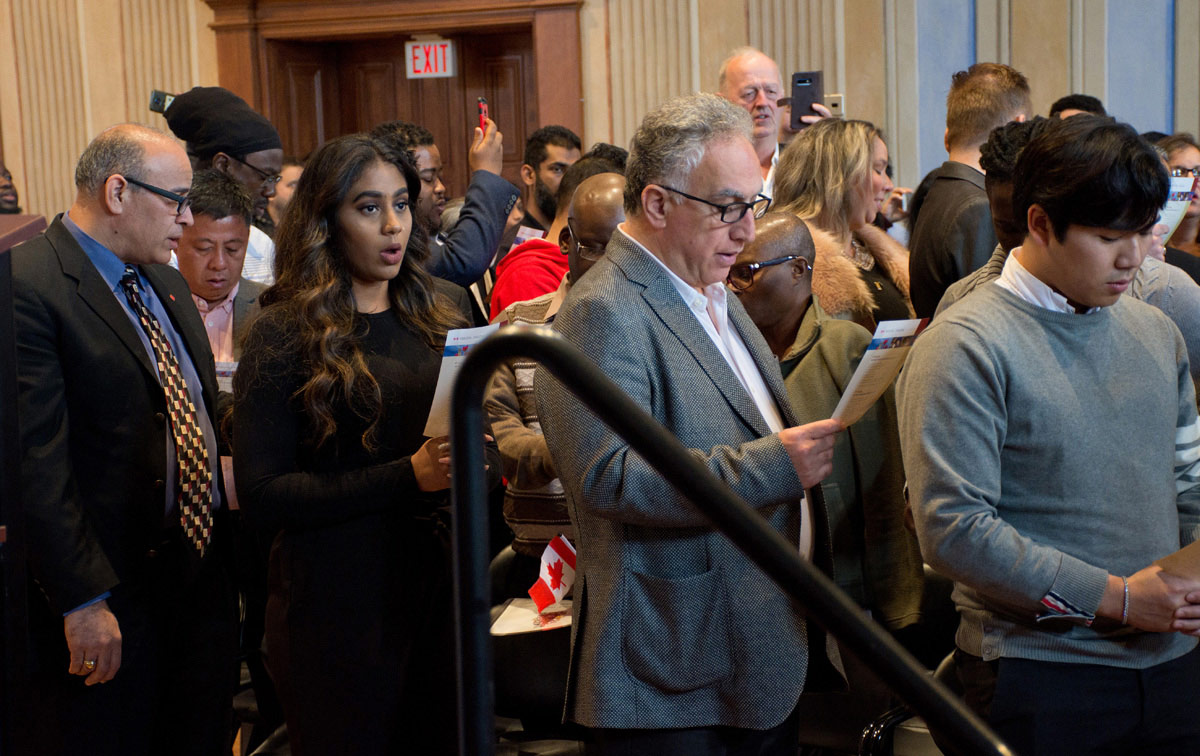 O Canada - some know the words, others read 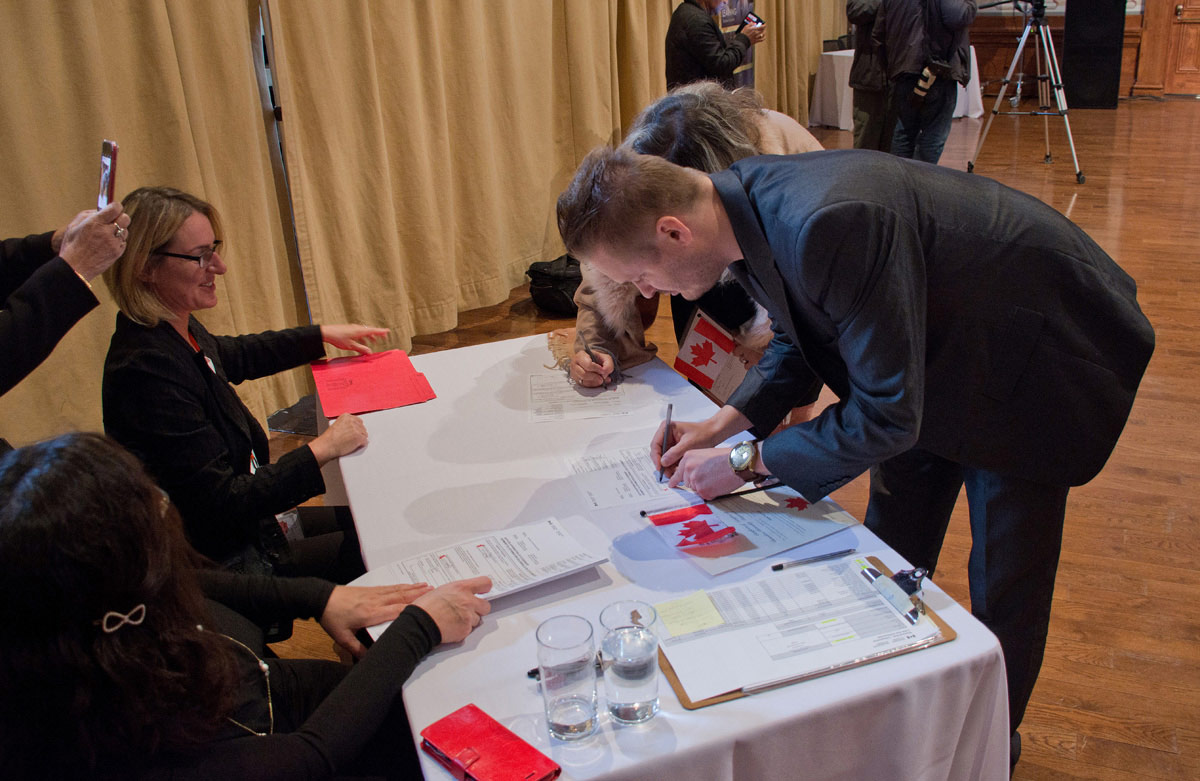 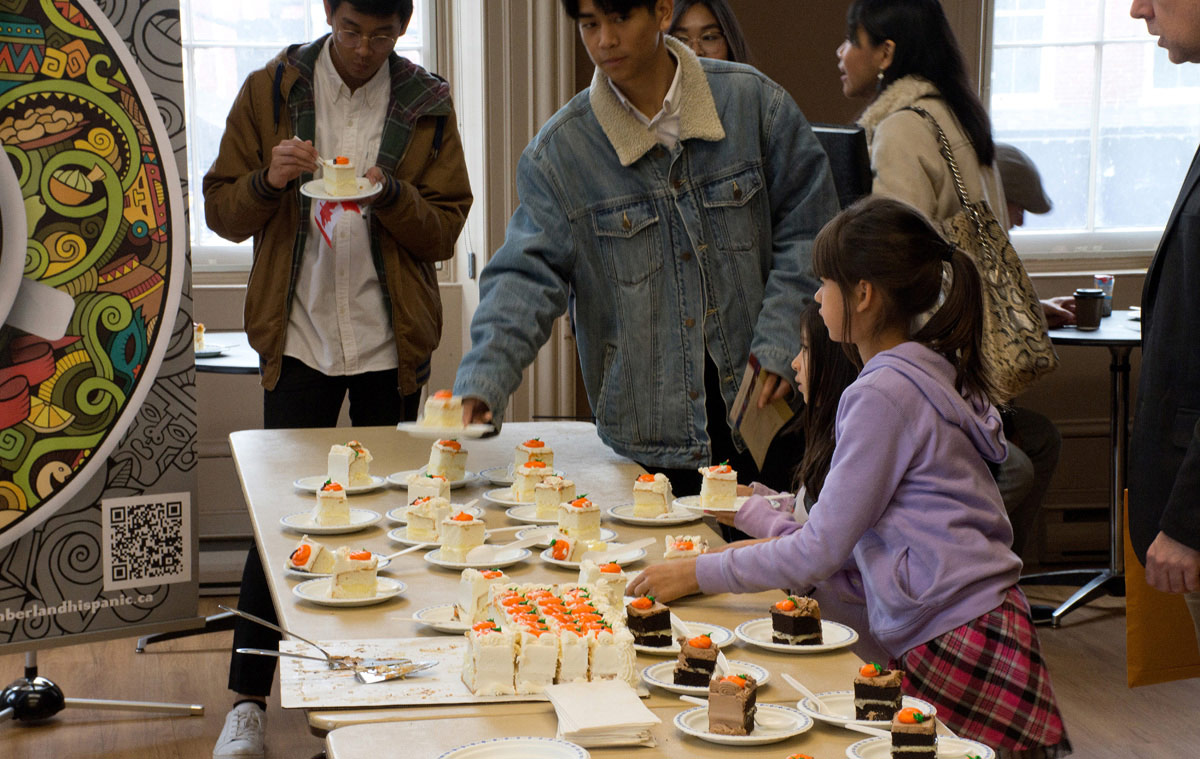 Did you know that after their first year – a lot of changes and shuffling around, I suspect – that New Canadians have a higher employment rate than Natural Born Canadians. AND, the group of Canadians with the highest employment rate of any Canadian group are the first generation of the Canadian born children of immigrants.I guess we slip a bit after we’ve been in this excellent country for a few generations!

I’ve always thought that in most cases it would take a lot of energy and determination to leave your home country and often your culture and language behind to move to another country. I can’t imagine doing that.

The economic impact of immigrants on our economy is another interesting thing to understand. It is incredible, all these new people with needs for housing, clothing, cars, etc. do a lot to stimulate the overall Canadian economy. Then add their high level of employment and enthusiasm for their new country. If there is a lot of New Canadians around then the economy will be doing well in that area.

My ancestors immigrated from Ireland to Montreal in the 1860s. They left shortly after for what later became Saskatchewan shortly and were the first Immigrant/ Non Native couple to settle there and established the Dominion Telegraph linking East to West. They froze for some years in a log shack they built. When they arrived in Montreal there were signs in store front windows that said: “No Dogs and no Irish.” Seems like we’ve made some progress since then. We are lucky to live in such a country.

Susanna Moodie visited Cobourg yesterday afternoon for the first time in over 180 years. Her appearance at Words On a Wire, part of the Spirit of the Hills Art Association was exceedingly well received. She recited material from Roughing It In the Bush.

You got it right Jason. Here she is https://youtu.be/MnECZw6WyXA

I love the edit on the video. Great job with the effects. Thanks for sharing Wally

What difference does their status make? We need more people in Canada. Always have and always will – it’s a big country with lots of room. My grandparents were all immigrants from England.

We need more people in Canada. Always have and always will – it’s a big country with lots of room.

Yeah, welcome to Canada (and even Cobourg). Just don’t offer your opinion for 10 years, right Deb?

I propose that people must live here for at least 10 years before being allowed to express their opinion on anything.
Deborah O’Connor
18 October 2019

Until all you cowards are willing to put your names to your posts they don’t amount to much. Who are you Frenchy and why are you hiding your identity?

The content of a post carries more weight than who said it, and I call “BS” 🤘🏽on your “tongue in cheek” excuse (and so would I think 74 others 👎).

Who am I? I’m the sum of one who remembers your posts past, Walter’s CTA boogeyman and WK’s pseudonym buster.

Who is Frenchy? Seek and you will find the answer.
BWAAHAHAHAHAHAHAHAHAHHAHA. Happy All Hallows’ Eve.👻

ya see “Frenchy”, that’s where you lose your ‘cred’. I never had any doubt that Deb’s ’10 year comment’ was anything but tongue in cheek.
Your comment “(and so would I think 74 others )” puts you on the list of those who think they are speaking for others rather than just for their pseudonym. That trap is full of mysterious ‘know it alls’ that like to babble freely without personal risk, which, as Deb said, renders their comments as not amounting to much. …lordy…lordy

“full of mysterious ‘know it alls’ that like to babble freely without personal risk, which, as Deb said, renders their comments as not amounting to much.”