At the County Council meeting on 18 November, the focus will likely be on the election of a new warden for 2020 but also on the agenda is a report from Glenn Dees, the County’s Director of Finance.  With 44 pages, the report details the rationale for the County’s 2020 budget, how it is structured, how the money is spent and where it comes from.  Although it has much less detail than Cobourg’s Draft budget (which has also just been released), it uses more graphics and is more user friendly in its explanations.  It also shows a high concern for long term trends and viability.  But their targeted levy increase was 3% and that is what is proposed for approval.  Because of an increased tax base, the actual increase in the tax collected is 5%.

Let me try to simplify things.

But how is this allocated?  Because some funds must be spent on certain things – e.g. the gas tax revenue must be spent on infrastructure – certain types of revenue are spent on particular things and that makes life (for the accountants) complicated. But that’s for them to worry about – I think the taxpayer is more interested in where does the money go; what is it spent on?

Staffing is high because “many services provided by the County are labour intensive such as long-term care and paramedics.”  The cost of Social Services is not a big direct burden on local taxpayers since “a significant portion of these costs are flow-through dollars and are funded directly by the Province”.  Contract includes “waste collection, engineering, auditing, legal, repairs and maintenance and a number of other specialized services.”

The biggest current Capital Expense is the Golden Plough Lodge (GPL) re-build and that will continue for a few years.  When that’s finished, the new bridge at Campbellford will also be a big amount (~$125M).

And of course as you would expect, roads comes next.

The County tax is about 32% of the total tax bill for a Cobourg taxpayer.  At 3%, Glenn estimates that for 2020 for the median single-family home, the overall tax impact from the County increase will be about $29.  County taxes are distributed across the member Municipalities with Cobourg taxpayers paying 24% of the Total.

Some (perhaps most) of the money for these projects will come (or has come) from the Provincial or Federal Governments.

All these projects mean that the County debt will rise from the current level of $20M to about $120M for 2022 onwards.  However, Glenn says that this remains well within limits set by the Province.

For the next 50-60 years, the Asset Management plan estimates the following:

Unlike Cobourg’s, this draft budget is not published for public comment although the full report by Glenn Dees is available on the Agenda for the upcoming County Council meeting.   He does a great job explaining the difficulties of putting it together – although not how priorities were decided.  The only public input was from a very general online survey (see link below).   It’s also notable that it comes directly from the Finance department – no Councillor seems to be assigned to overview it.

The budget is simply being presented at the coming meeting – it’s expected to be approved at the first meeting in the New year.

Plastic shopping bags ….. new borns require 10 to 15 changes a day. I have not heard of any mothers using cloth diapers these days – only disposable which never break down. Think about it – a minimum of 70 disposables a week going into the trash – with us forever. Haven’t heard anything about banning them. So as one commentator said – more garbage men, more trucks, their seems to be very few brave enough to take on the sacred cow of disposable diapers.

New borns and some seniors. Do you know anyone living in a long term care home … lots of adults living there using some form of ‘diaper’.
There was a company which developed a waste separating system using a spinning machine to separate the diapers into component parts (poop, plastic etc) to better deal with waste. Not sure if the company is still operating.

Thanks for the excellent summary and report John. Your NEWS Blog is a 12 month Xmas gift! 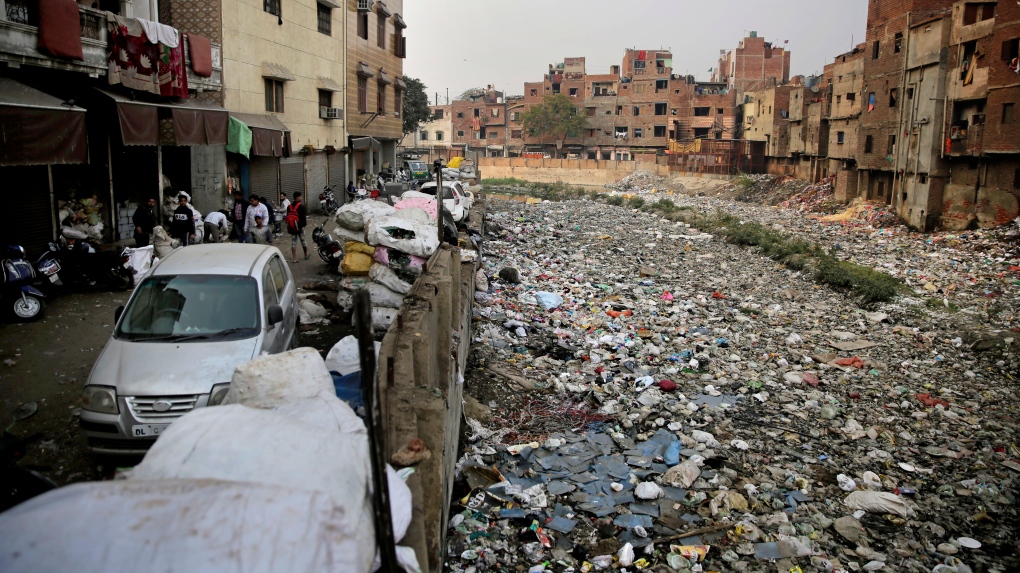 Waste disposal is a big ticket item in the County budget.
As “greengrass” notes below, it will likely rise.
If it should get out of hand, we can always try to the low-cost, low-tax approach used in New Delhi, India’s capital, as shown above.

That repulsive New Delhi photo shows the consequences of energy poverty. This will be mitigated with the construction of a slew of new coal power plants producing reliable inexpensive energy.

“The world’s largest coal-plant developer, however, is India’s National Thermal Power Corporation, which plans to build over 38 gigawatts of new coal capacity in India and Bangladesh. India’s state-run power utility plans to invest $10 billion in new coal-fired power stations over the next five years. Over 300 million of India’s 1.3 billion people are still not connected to the grid. Around 78 percent of India’s electricity currently comes from coal-fired power plants. As India brings electrification to more of its people, carbon dioxide emissions from India’s thermal plants are expected to increase to 1,165 million metric tons by 2026/27 from 462 million metric tons in 2005—a factor of 2.5 in slightly over 20 years.”

Perhaps you are right about energy poverty producing heaps of garbage.
On the other hand, India may have decided not to waste money on frills like garbage removal but rather boost its space programme with a moon mission that was 98% successful.

Your speculation (“may have decided“) always skews in the direction of socialist doomspeak. India may well have decided that they can do both, provide cheap reliable energy to its people and apply some of their intelligence to go to the moon, and develop other elements of infrastructure. There;s gonna be hundreds and hundreds and hundreds of new coal energy plants with a life span of 50-60 years each delivering cheap reliable energy to the most energy deprived regions of the world, Asia and Africa.

Why don’t they just apply some of their intelligence and go nuclear on the energy front?

Walter, you can be very proud to learn that Canada has invested liberally in the Chinese coal industry, contributing to those hundreds and hundreds of coal energy plants it plans to build around the world. “Records show the Pension Plan Investment Board bought shares in 21 publicly-traded China coal operators, distributors, and utilities including $3 million in the Pingdingshan Tianan Coal Mining Co.; $8 million in Huolinhe Opencut Coal Industry Corp; $13 million in China Coal Energy Co. Ltd., operator of twelve mines; $14 million in China Resources Power Holdings Co. Ltd., distributor of coal in six Chinese provinces; and $17 million in Shanxi Meijin Energy Co.”

Makes me feel so much better knowing that my monthly CPP will be secured in part by contributing to the diminishment of energy poverty in poor countries, thereby spreading prosperity. What a wise investment in a growing industry.

According to the National Post (https://nationalpost.com/news/politics/yes-anti-pipeline-vancouver-really-is-north-americas-largest-exporter-of-coal), “Vancouver’s various coal facilities exported 36.8 million tonnes of coal in 2017” and “Coal is the province’s number one export commodity, with $3.32 billion of coal mined in 2016.”

It is comforting to know that BC is working to shutdown Alberta’s oil exports. More importantly, Cobourg’s Council is doing their part by banning water bottles and i In a few years we will even have a sustainability master plan to fight our climate change emergency. We should all feel good knowing that both Canada and our little town are doing their parts to delay the coming mass extinction foretold by Greta!

County staff are to be commended on developing such a comprehensive report and explaining in great detail how the figures and the levy were developed. Probably too much detail for the average person to absorb but the use of charts helps immensely.
The only thing that I would appreciate seeing is some measure of performance to justify increases in expenditure. This is a deficiency in virtually all municipalities.
Measures such as kilometres of roads serviced, # of senior programmes, permits issued, etc. should be related to the $ spent and compared to the previous year. If these measures are in place then changes in $ spent can be evaluated as to whether the tax payer is getting more value (or less) for each tax dollar.
The information for this is already largely generated for the mandatory reports for the provincial Financial Info Return.
I would like to hear from the County if they will be instituting this in the near future.

It’s certainly well-managed, clean and pleasant. The staff are personable and capable at all times, in my experience. I just don’t understand how anyone could decide that that quite workable building should be demolished and replaced at great expense. Added to, yes, but an awful waste to destroy what works just fine. Who do we thank for this decision? Is someone in a position of authority using their influence for personal empire-building?

The GPL does not meet the standards set by the Ontario government, to renovate the building to the new standards would cost more than to build new .
If you had concerns you should call the county 2 years ago , when they decide to build a new building

The staff at GPL are amazing. I too had questions about the proposed demolition of what seemed to be a usable building. I understand that there are requirements to meet for a long term care facility and I think that … once the new building is up and running … there needs to be serious thought put to re-purposing the existing building rather than sending it to fill up valuable landfill space. Strip back the existing buildings (some sections are mostly concrete wall), upgrade the mechanical systems, and reorganize the communal and private living spaces into an affordable community co-housing model. The recycling message applies to government too!