This year, Cobourg celebrates the beginning of Gay Pride month with a rainbow crosswalk at King and Second Street (not Third as reported earlier).  There was a large crowd at a ceremony today in front of Victoria Hall:  Mayor John Henderson, Police Chief Kai Liu, Councillor Adam Bureau and Ashley Bouman (Leader of the local pflag chapter) spoke about inclusiveness, community and a supportive environment.   The size of the audience at event this year was noticeably bigger than previous years – in  2016 there was less than half a dozen at the flag raising at the Police Station.   As in previous years, there will also be a parade later in the month.  Council has been supportive by proclaiming June Pride Month and all councillors except Emily Chorley were at the event.

Creating the rainbow crossing  and the event today was organized by Ashley Purdy but the annual flag-raising event was started four years ago when Adam Bureau (in his DBIA role) got together with Ashley Bouman and Kai Liu.

Because the sidewalk is reminiscent of the famous sidewalk the Beatles walked across for their Abbey Road album, the ceremonies were kicked off by the Police Board walking across it, led by Chair Dean Pepper.  Others in the group then did the same thing.

In his speech, Adam made a point of recognizing Ashley and Kim MacArthur Jackson for their leadership in the LGBTQ community – Ashley also made Adam’s “awesome tie” (see photos below).

Chief Kai mentioned that after raising the flag in a previous year, he received a letter from an 11 year old who was pleased that that action validated her family with two Moms.

The painting of the crosswalk was organized by Ted Sokay of the Public Works department – on short notice he hired Grafton based Prime Pavement Markings to do the work – on Saturday.

Police – in the person of Deputy Chief Paul Vandegraaf – stopped traffic to help photographers with the many “photo ops”.

After the speeches and some more photos, the entire group marched to the Police Station where the Gay Pride flag was raised.

But the story is also told by the photos below. 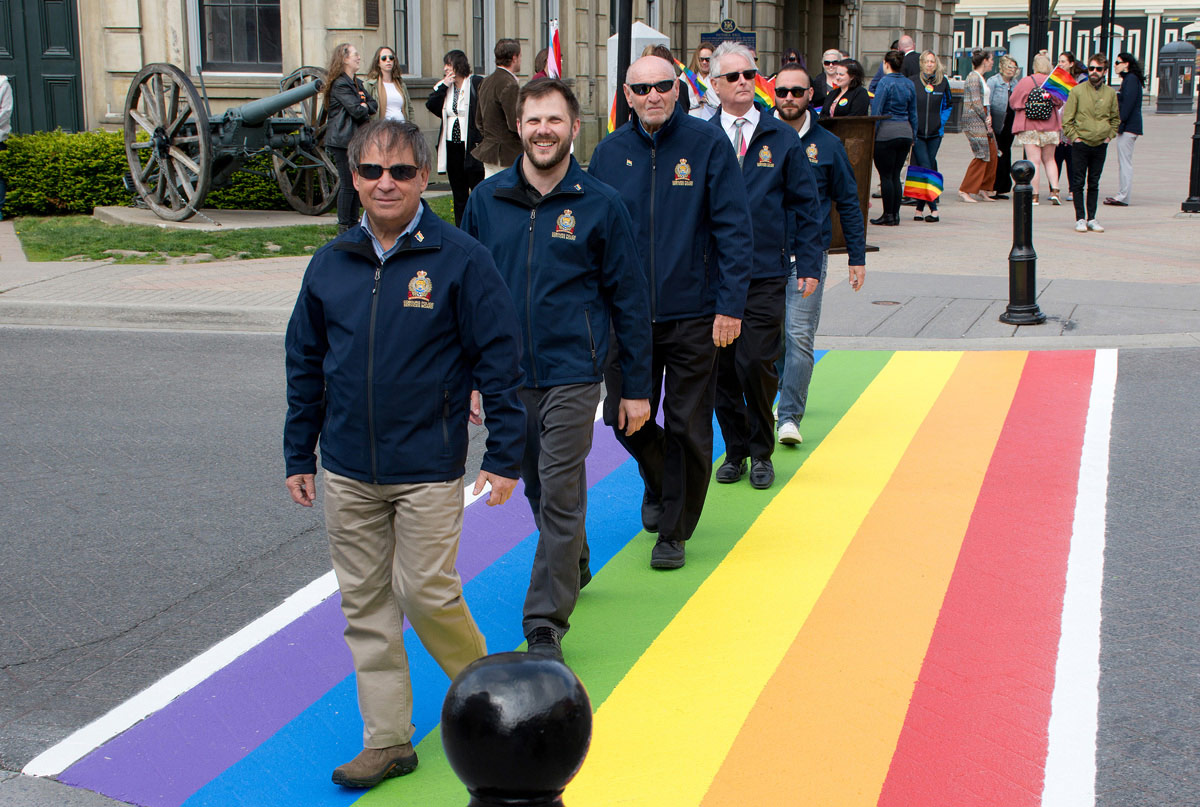 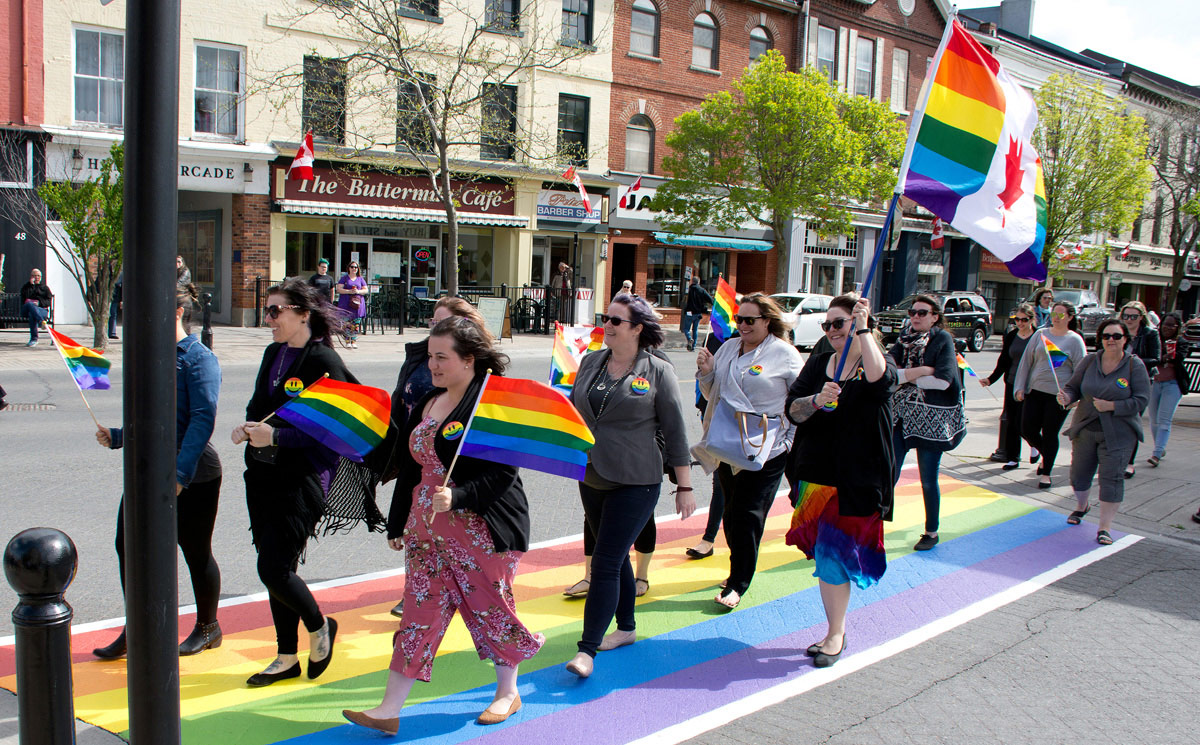 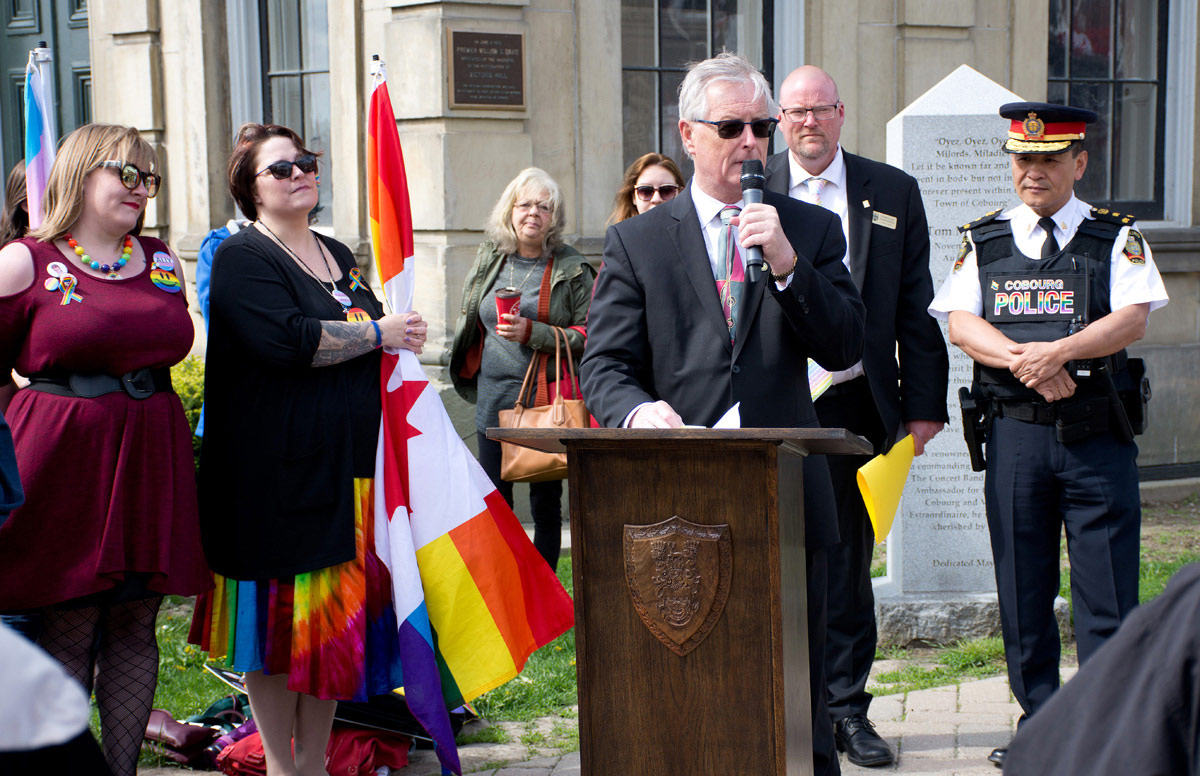 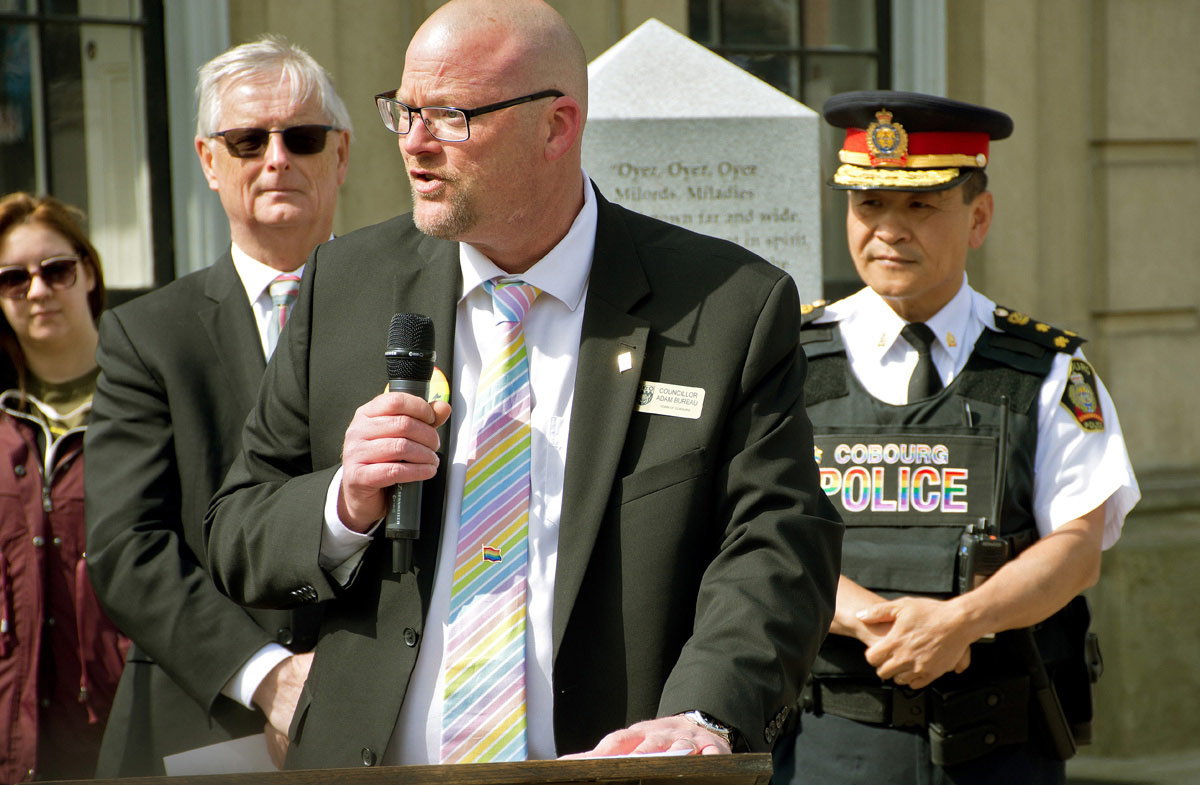 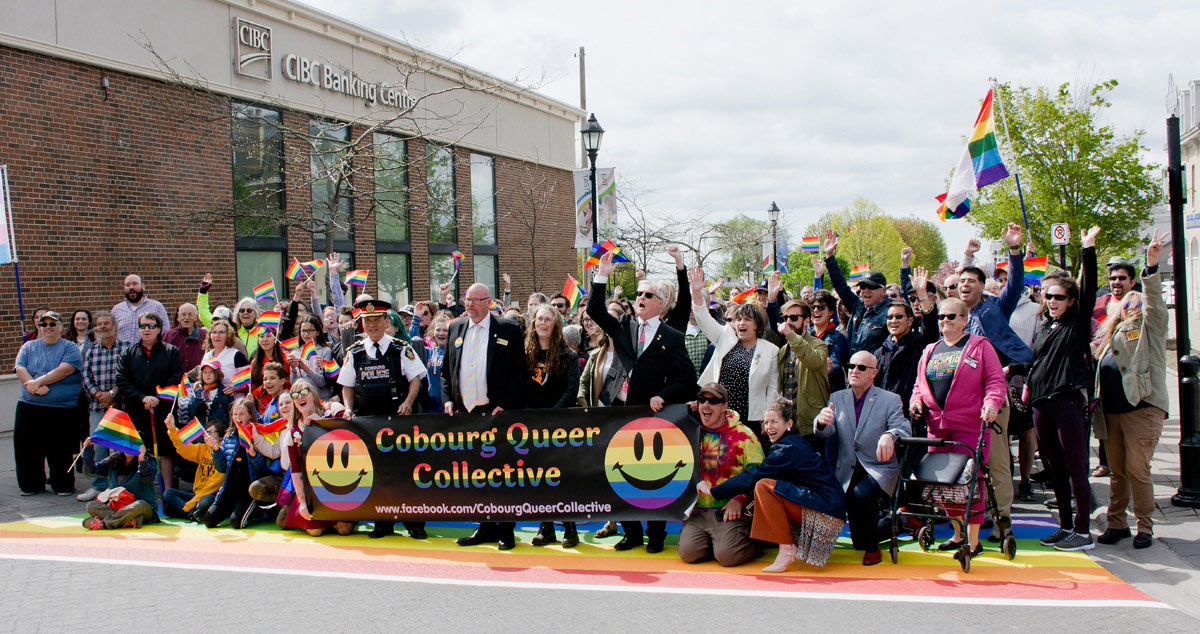 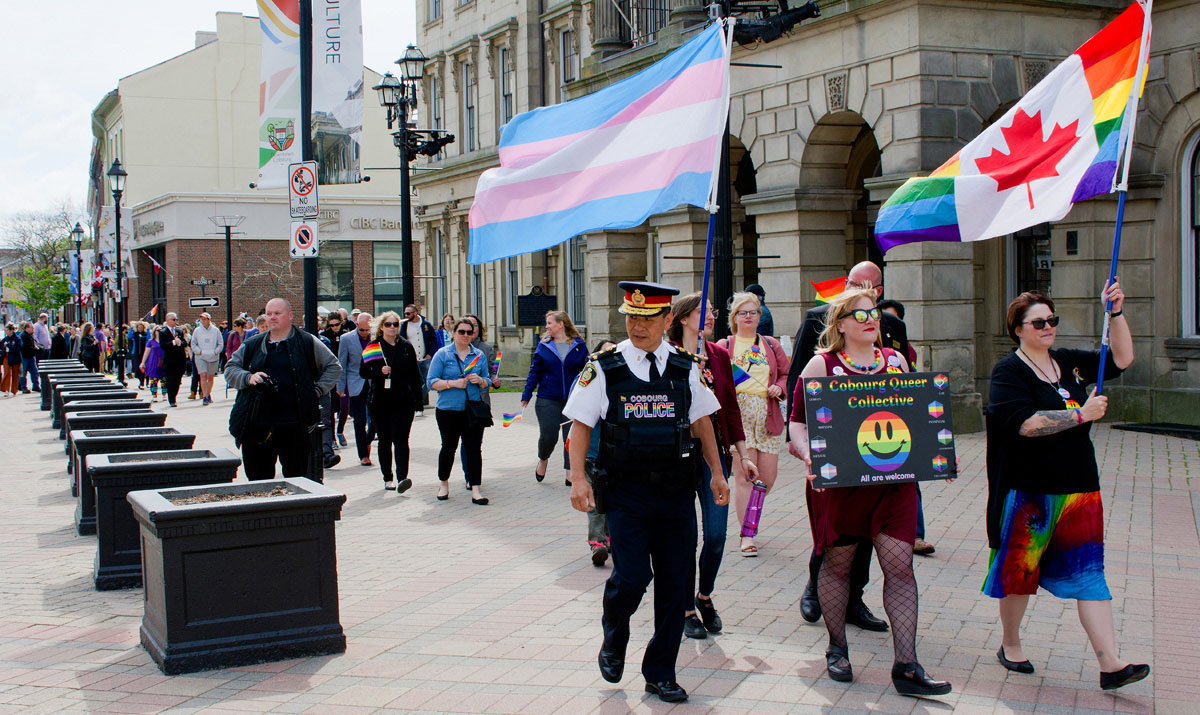 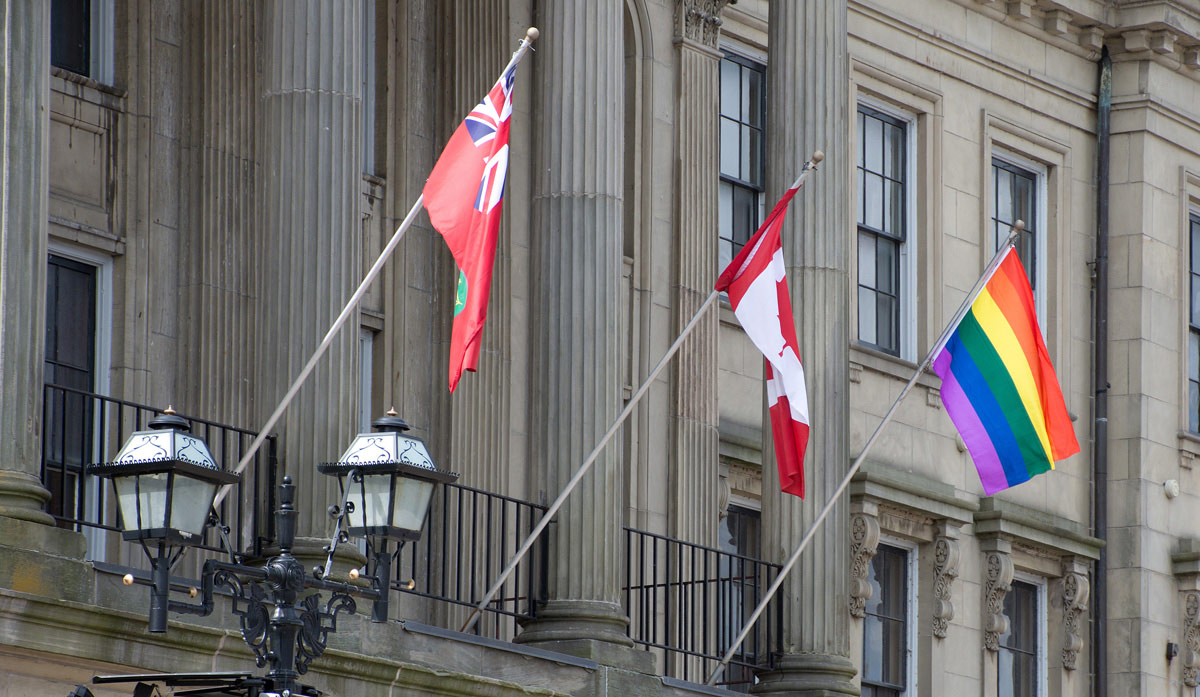 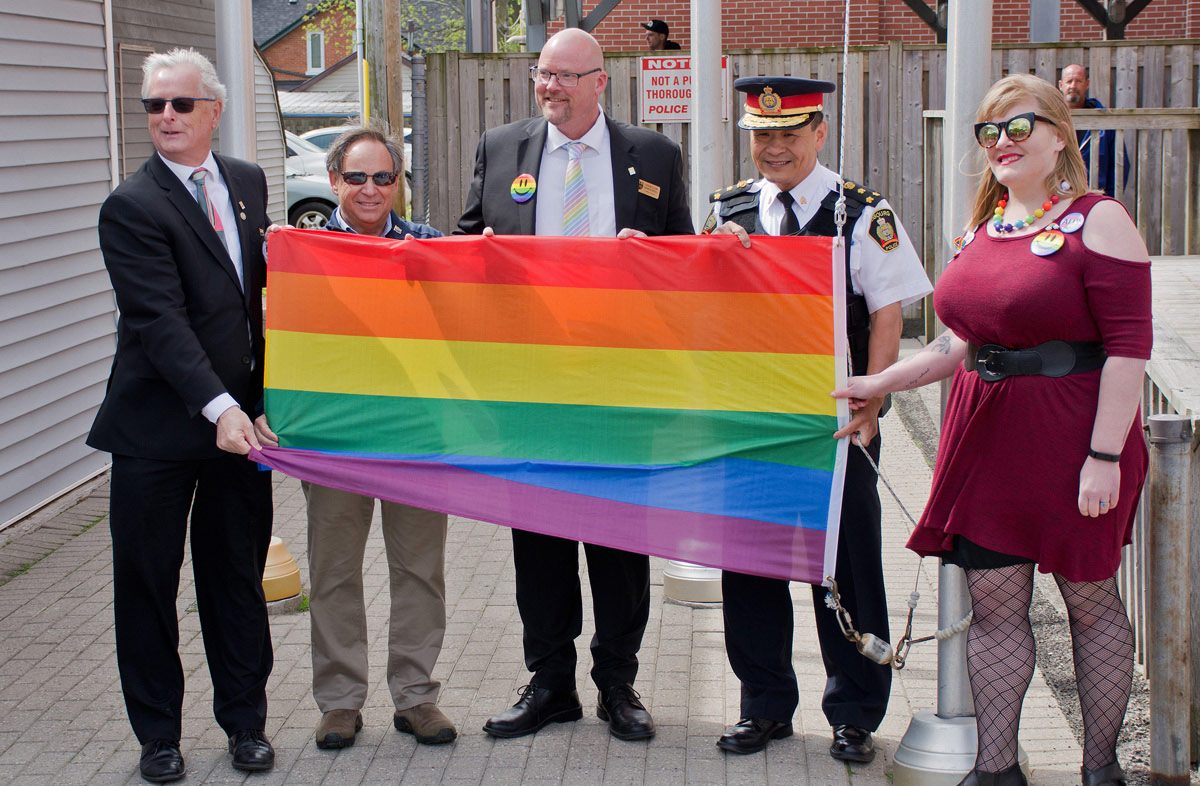 Getting ready to fly Gay Pride Flag at Police Station 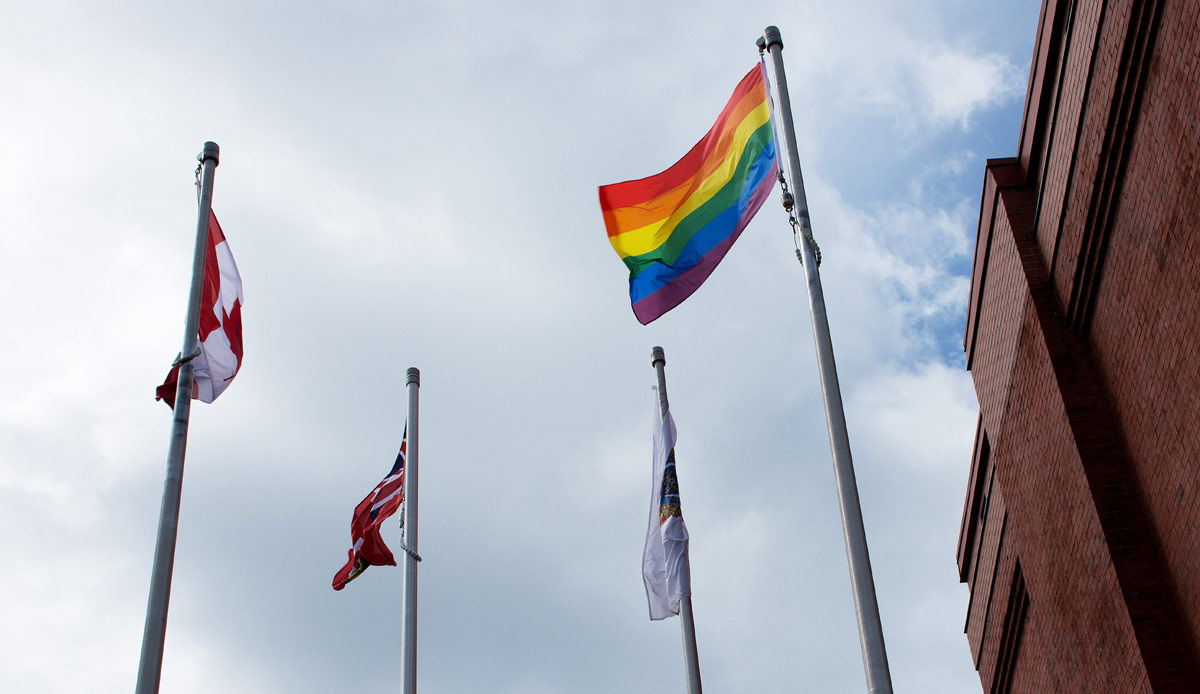 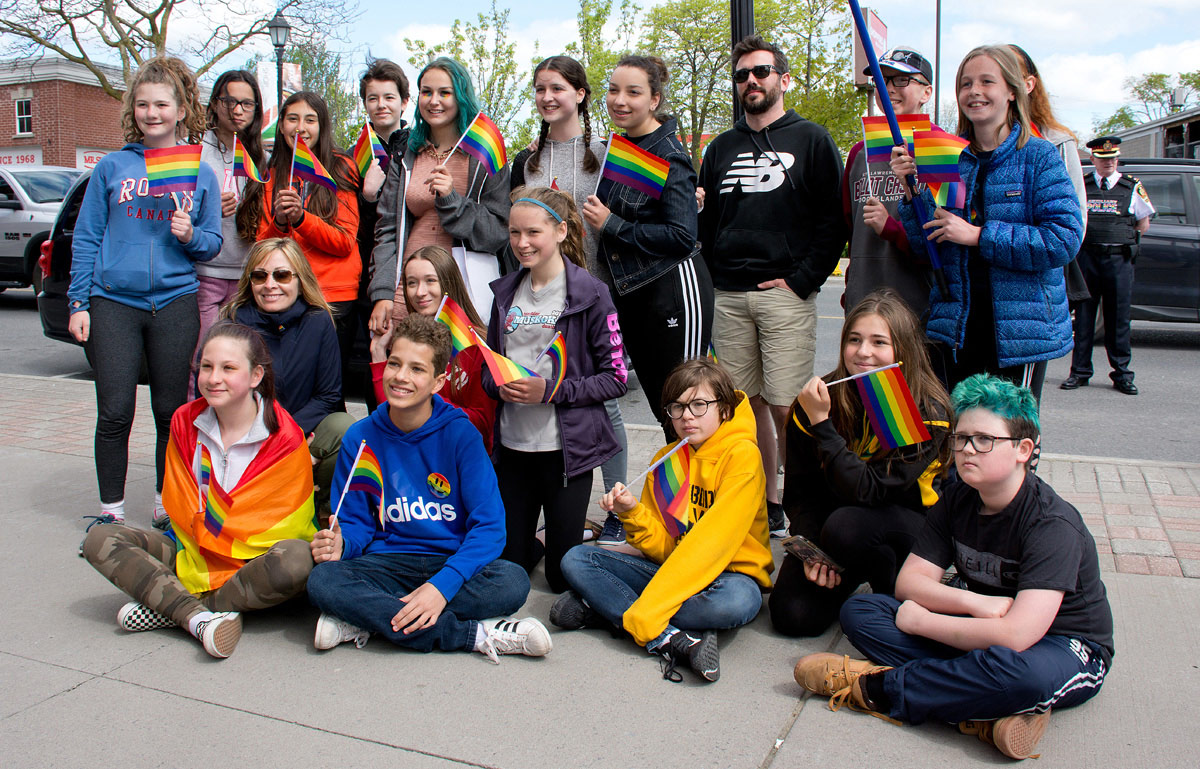 Gay Pride Event - Some kids who wanted to be included

Let’s assume for a moment that threat of a shooter at St. Mary’s was real.
How would it look that the Chief and Deputy-Chief were at a photo-op at an event unrelated to policing matters?
Community engagement has its place, but at least one of the commanding officers should be on the scene of a school lockdown.

I think we need to put some trust in our police that they know their job. I’m pretty sure that if there was a threat that needed one of them they would be there. They would have assessed the situation and acted accordingly.

Albert – this wasn’t an active shooter event. I suspect one or both commanding officers would have immediately left the community engagement opportunity to assume command of the scene if it had been. The bring this mountain back down to molehill size shall we…..

So I will be the one with the positive comment and wait for the miserables and their thumbs down.it was a wonderful gathering of supportive people. As for the police, I witnessed our deputy chief motion to a speeding car to slow down then, without missing a beat, he took a pen from his pocket and recorded the licence number on his hand. Well done!

If this was an event to celebrate Pride howcum the pics show well dressed politicians doing funny walks. Looks like an event for them to get dressed up and preen!

Ben, how on earth can you possibly find ANYTHING negative to say about this post or those pictures. Seems to me there were many more people than just politicians at the event but maybe in your opinion gay people weren’t well represented because no one was dressed as a construction worker, a biker wearing chaps, an Indian chief or a cop in short shorts. Perhaps you should make a suggestion for next year, that anyone that is in the LGBTQ community could wear a large patch specifically identifying them as being part of the community just so you’re clear who they all are.

The photo in the body of the article includes one male Town Councillor and two women, one of whom is at the podium speaking and one in a rainbow dress. They both happen to be movers and shakers in the Cobourg Queer Collective. Is that genuine enough for you? Jeez Ben, lighten up..

Maybe the Police Services Board should stop cheer leading and actually do their jobs.

No wonder so many front line officers are off on stress. I guess the Chief and Deputy didn’t want to get their new fancy rainbow outfits dirty.

Kyle – Community engagement is also part of their job. The Editorial attached appears to have an agenda – sorry Pete Fisher. It was quickly determined the suspect was not at the school AND was apprehended a short time later. Why would the Chief attend this type of call – where is the logic in that?

There you go again Kyle. Ignorant of the facts and a master of an arm chair quarterback.

“all councillors except Emily Chorley were at the event.”

I’m curious as to why this was.

I wonder if she was at an appointment in Mississauga?