Billed as a chance for women to shop it was more of a party with balloons, goodies and a fashion show.   Organization of it was started by DBIA coordinator Jenna Leslie but she quit a few weeks ago to take a job in Kingston and her replacement, Aaron Wood, doesn’t start until Monday.  So Councillor Adam Bureau and Deputy Mayor Suzanne Séguin stepped in and with a number of volunteers, organized the fun event on Friday night.  There was a Jazz band on King Street and the old Sarby’s store was used to house some vendors and the Fashion show.  The original intent was for the fashion show to be outdoors in front of Victoria Hall but a threat of cold and possibly wet weather made a sheltered location a better idea.  As it turned out, it was cool but sunny.

The event started at 5:00 and was scheduled to go to 9:00 with the idea that anyone who came would not only watch the fashion show but also visit the stores and maybe a restaurant.  Adam reported that a quick survey gave the impression that there were in fact more buyers and certainly more traffic than usual. The vendors in “Sarby’s” were chosen to not compete with any of the Downtown stores and seemed happy with the crowd.

I counted 2 Auxiliary Police and 2 Special Constables on duty – they handed out cookies to anyone hungry (see photos below).

Many of the store owners actually participated in the show as “models” although there were also some helpers.  Some of the models seemed almost professional (like Thelma Dillon at right) and others were just “regular” – but all were cheered loudly and everyone enjoyed themselves.

The clothes and accessories were all from local stores and MC Marcie Whelan made sure we knew where we could buy the items on display.  “Models” were of all ages – from toddlers to mature and there were even a couple of dogs.

More than 100 people watched the show and I took lots of photos but contrary to good journalistic practice, I did not get everyone’s name – just some of them.  Below are 14 photos that tell the story – although with this format there’s room for only a few of the “models”.  Be sure to click any photo to enlarge it and access the slide show controls. 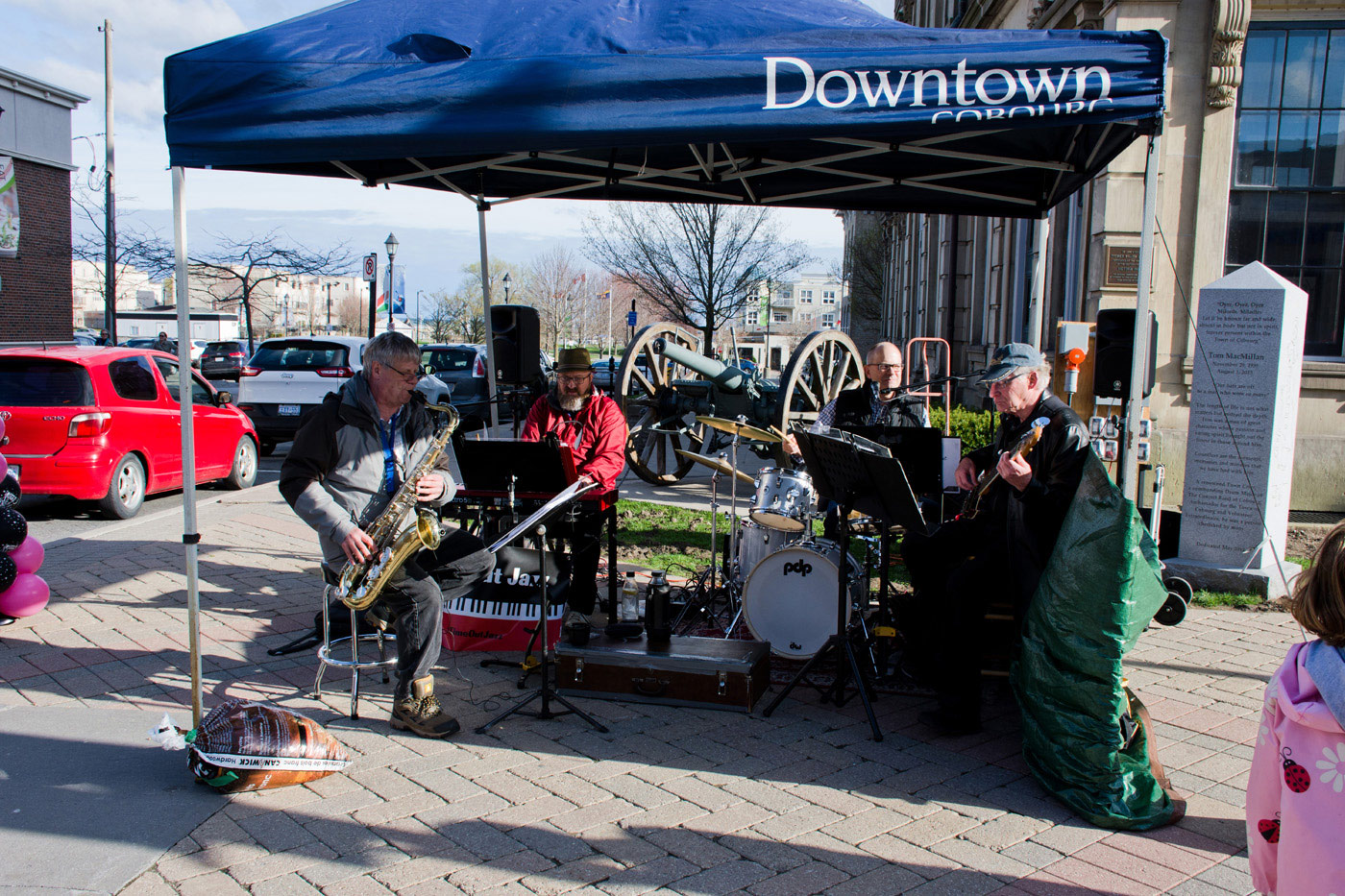 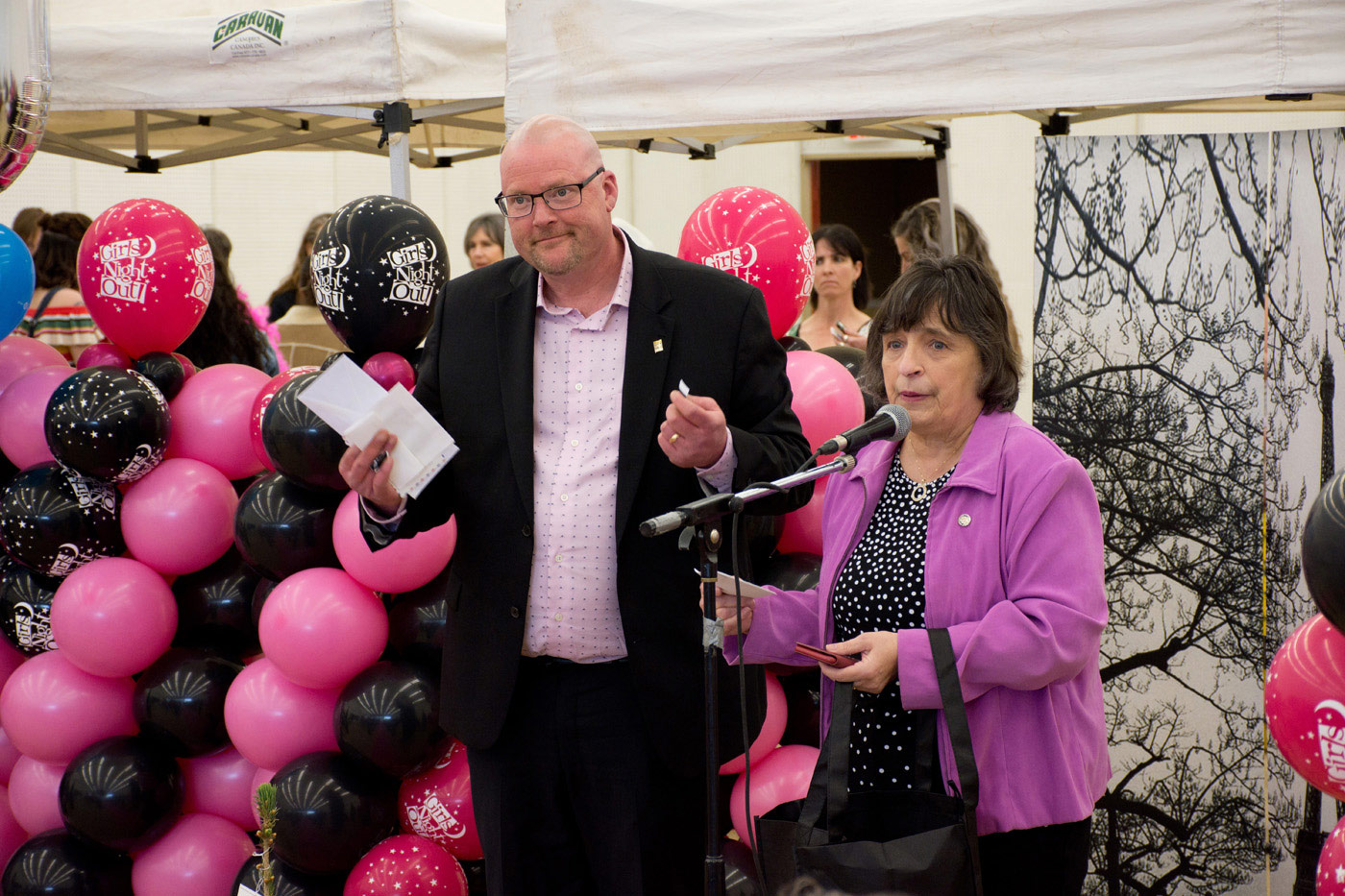 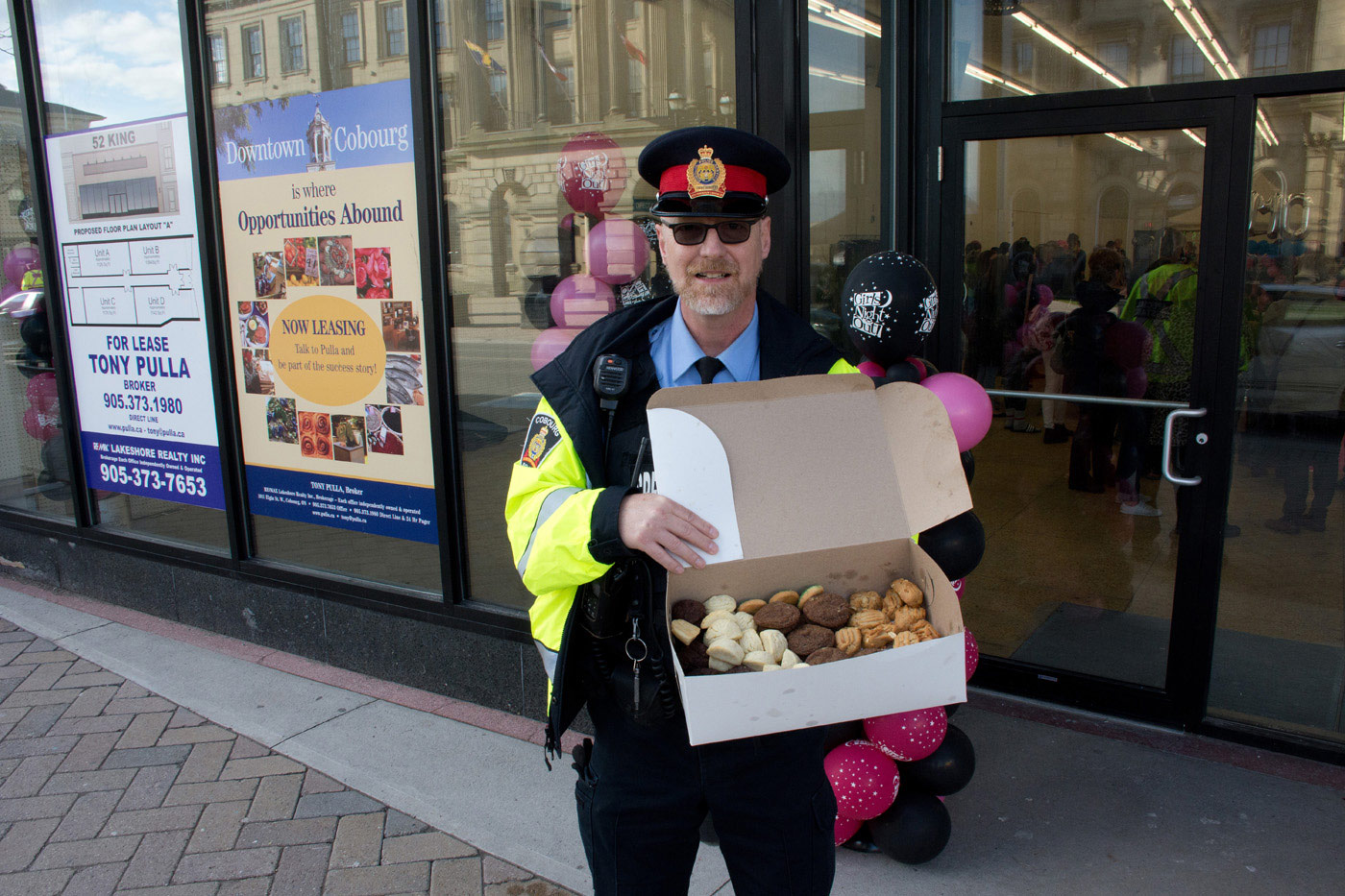 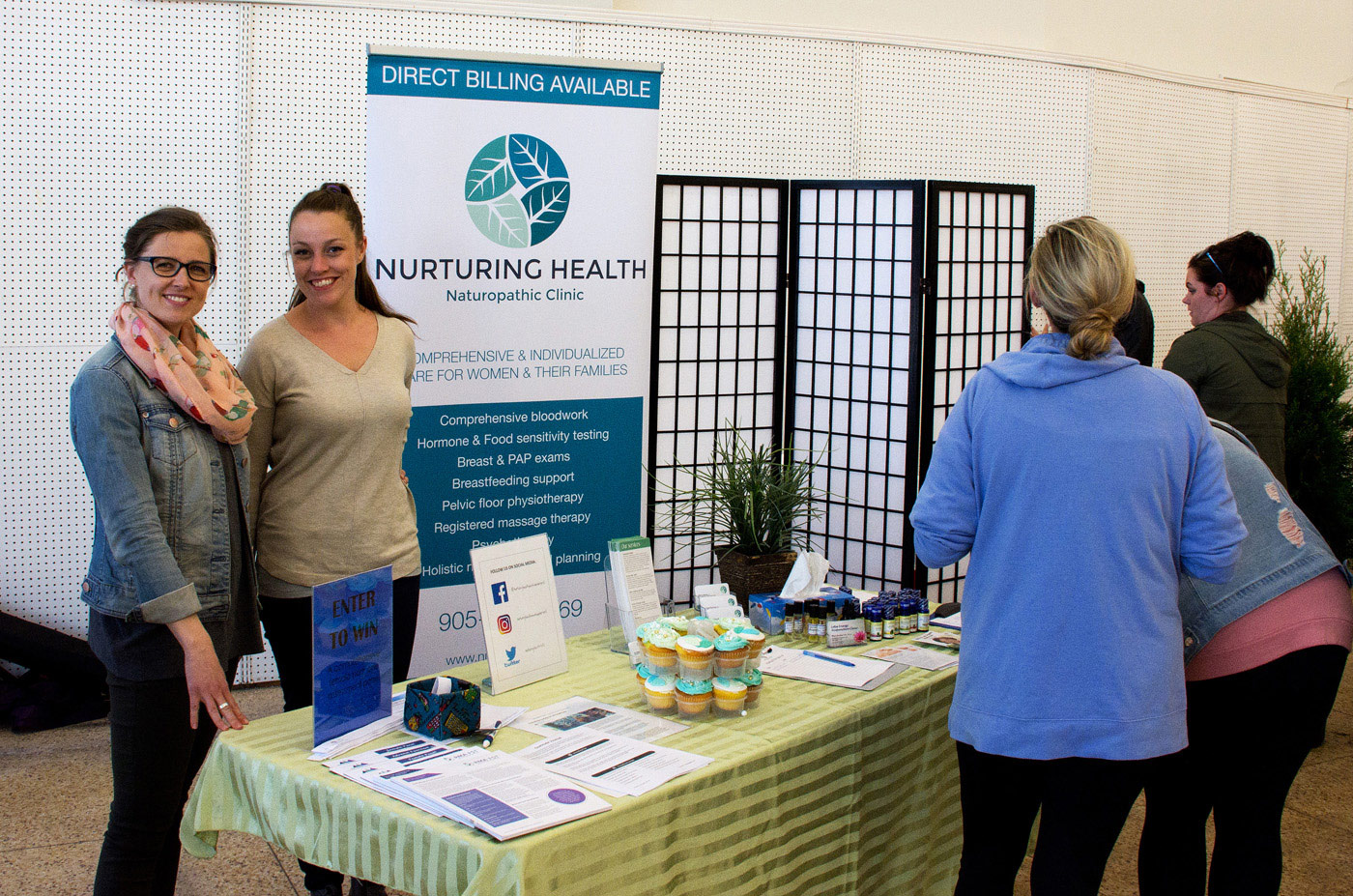 One of several Vendors 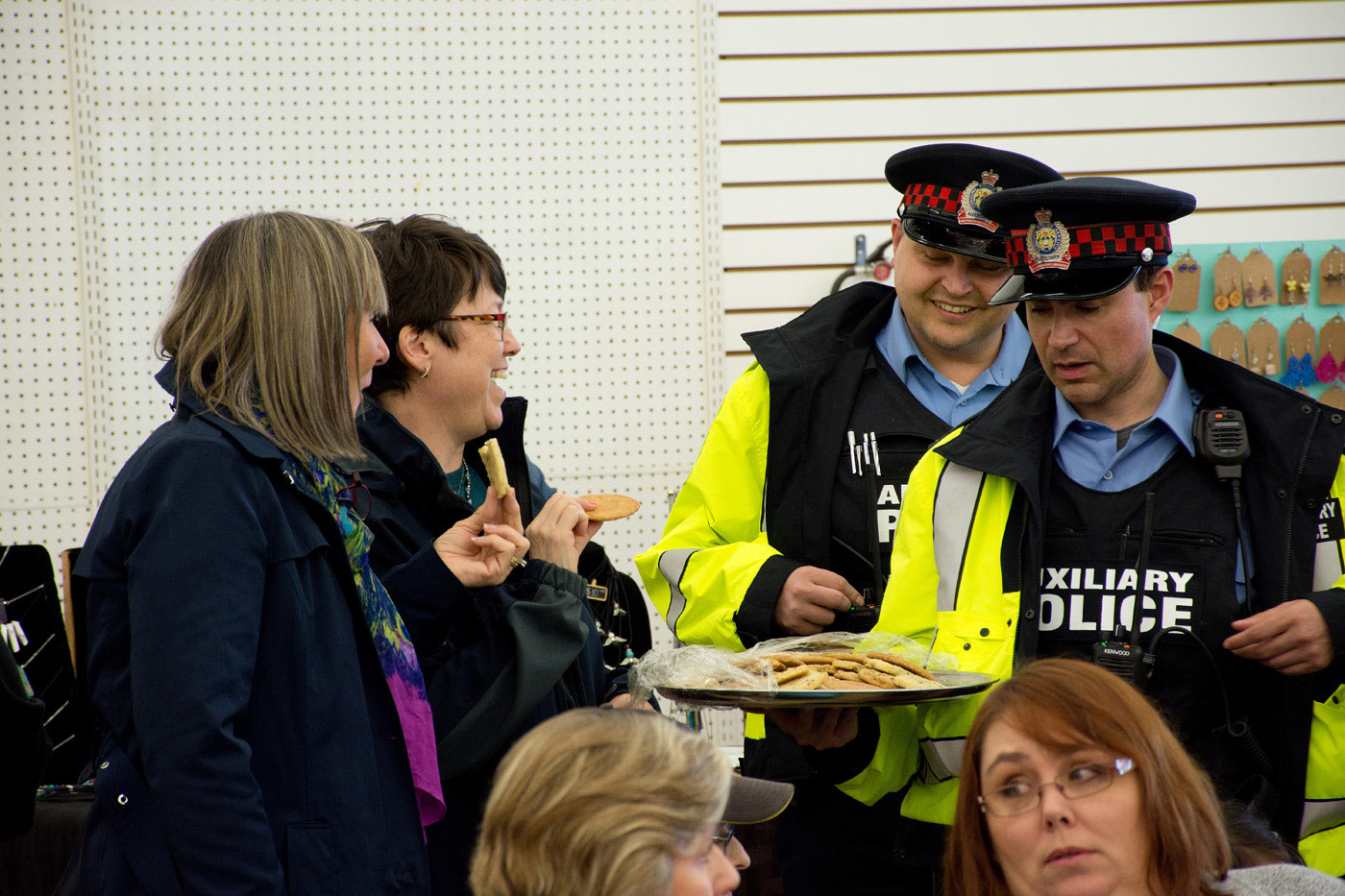 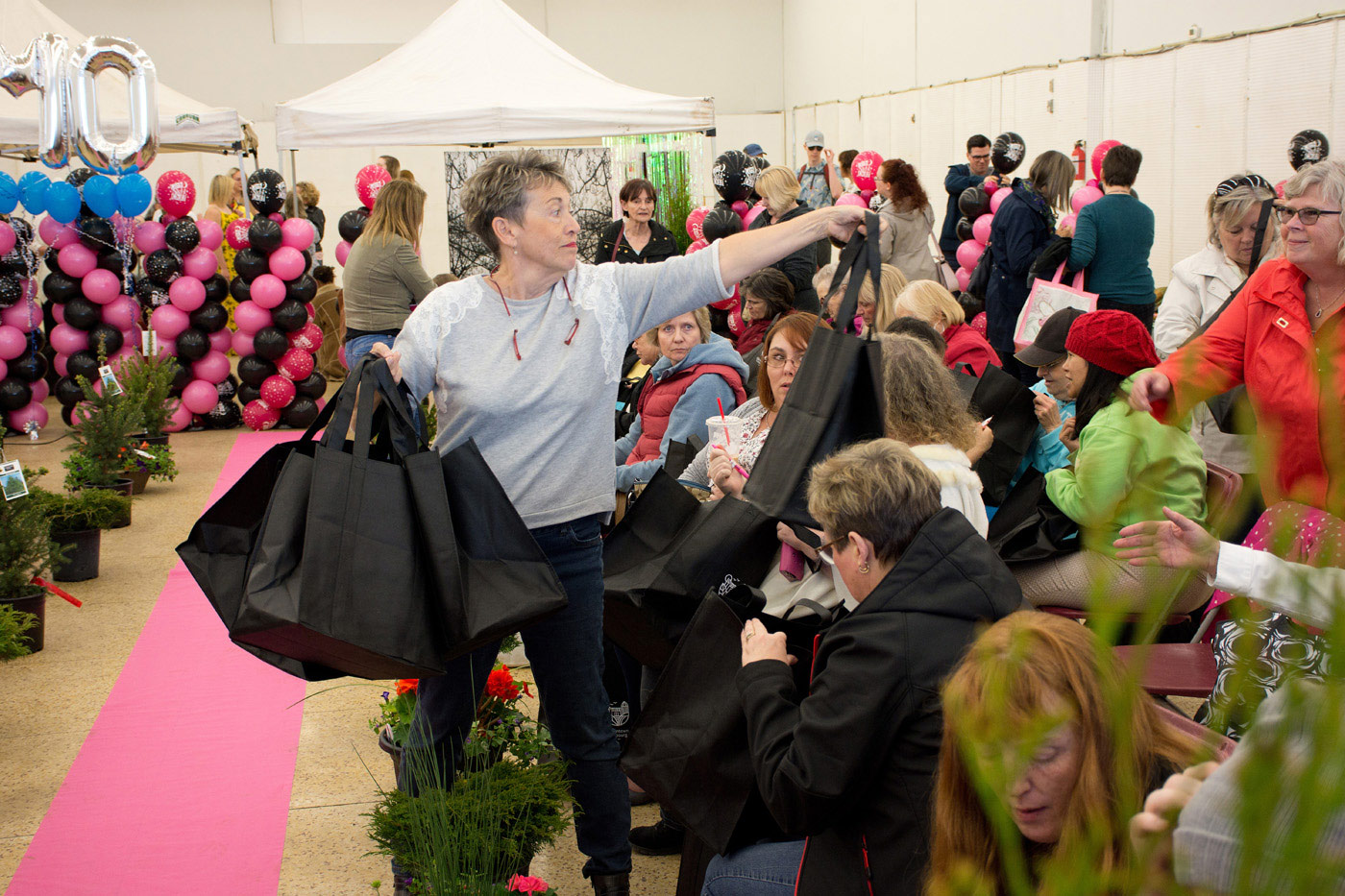 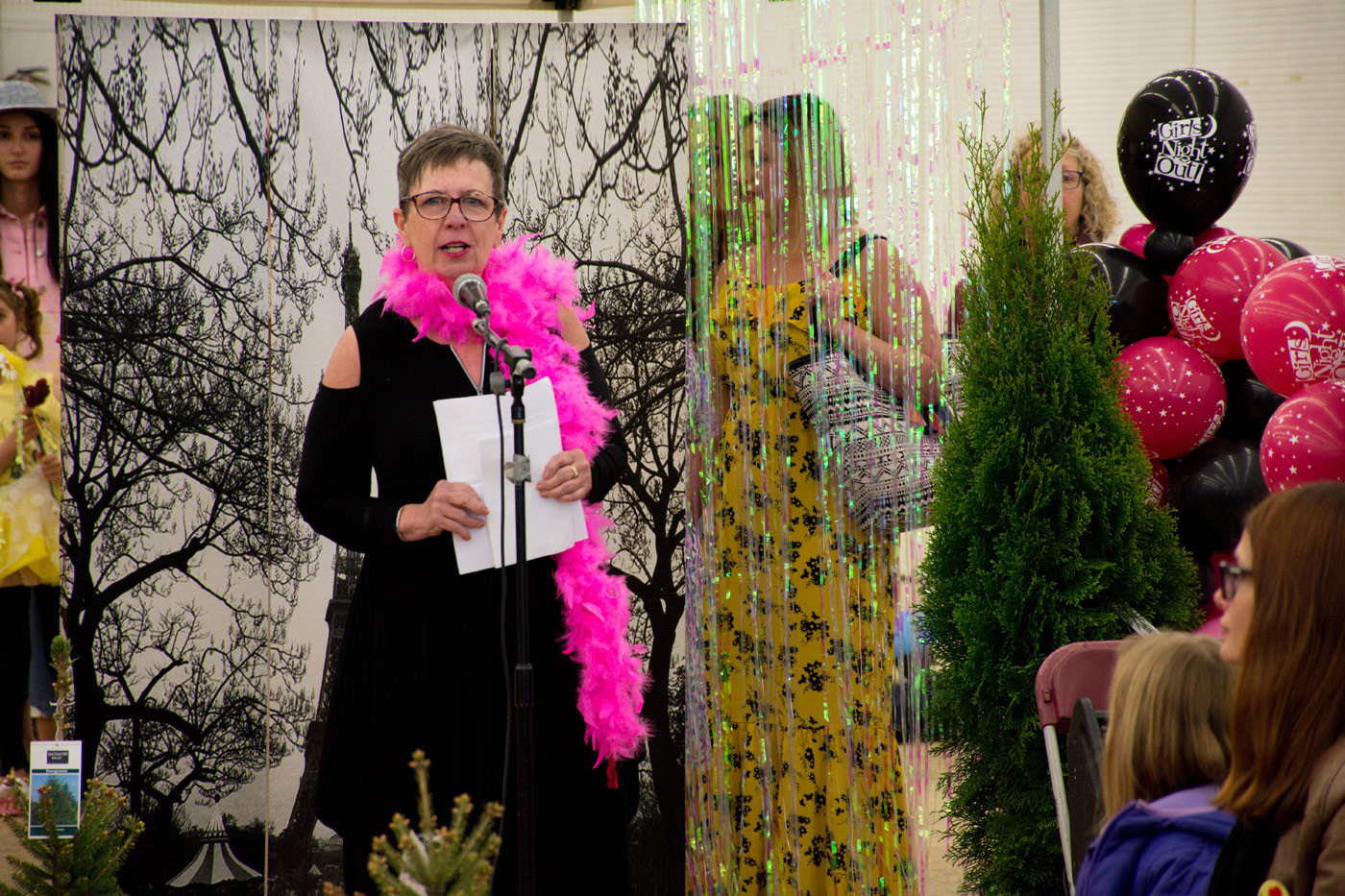 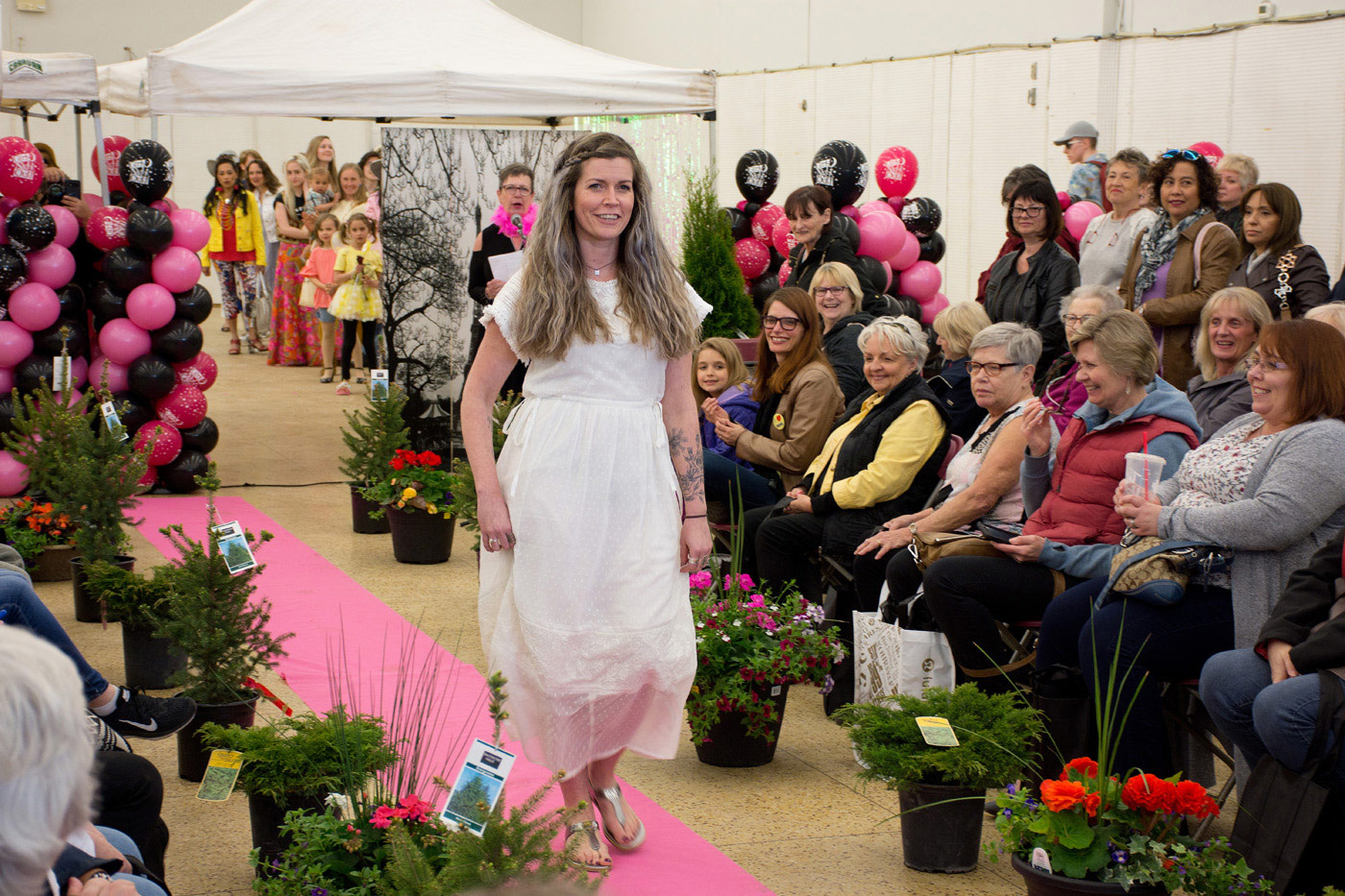 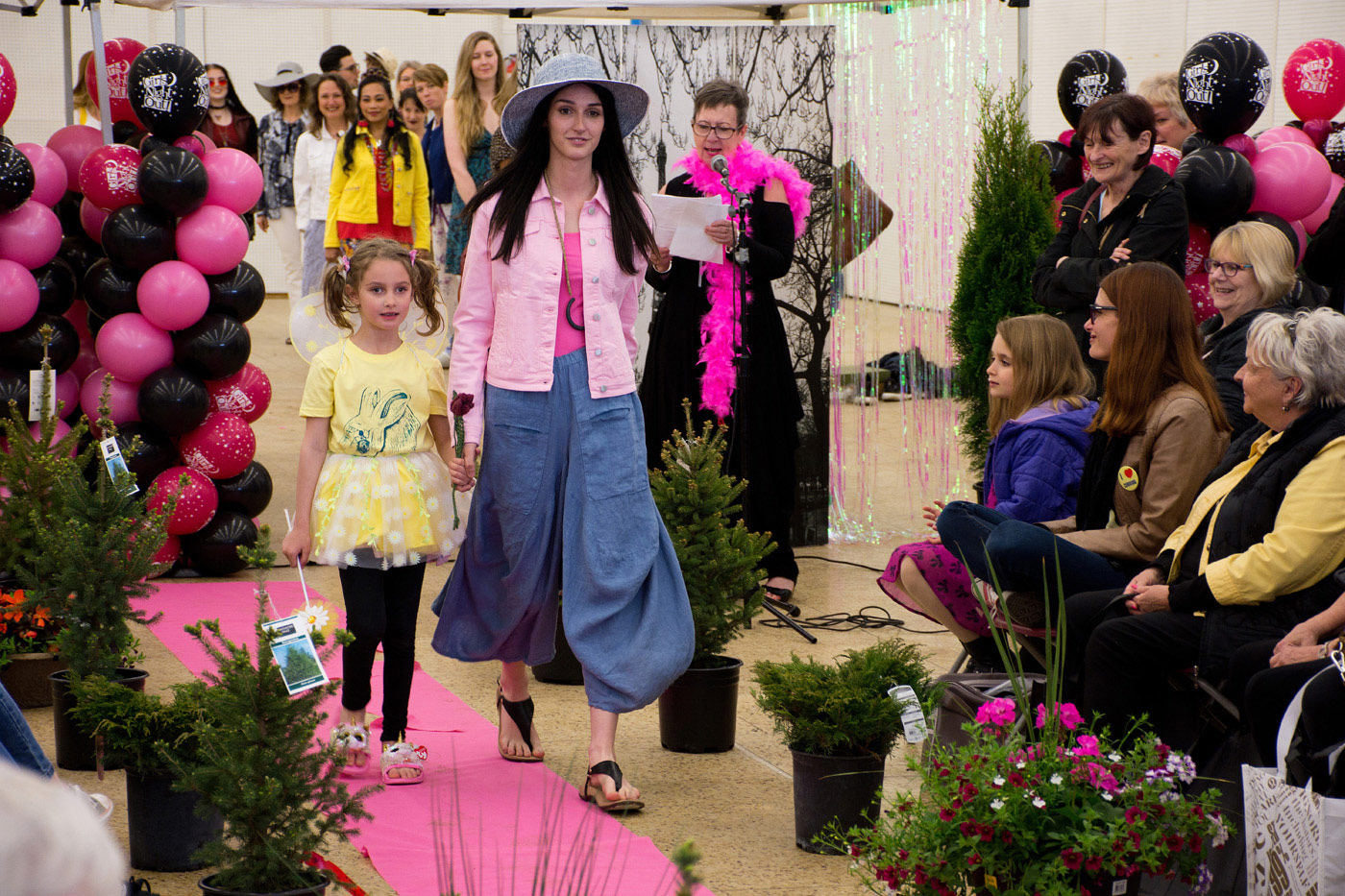 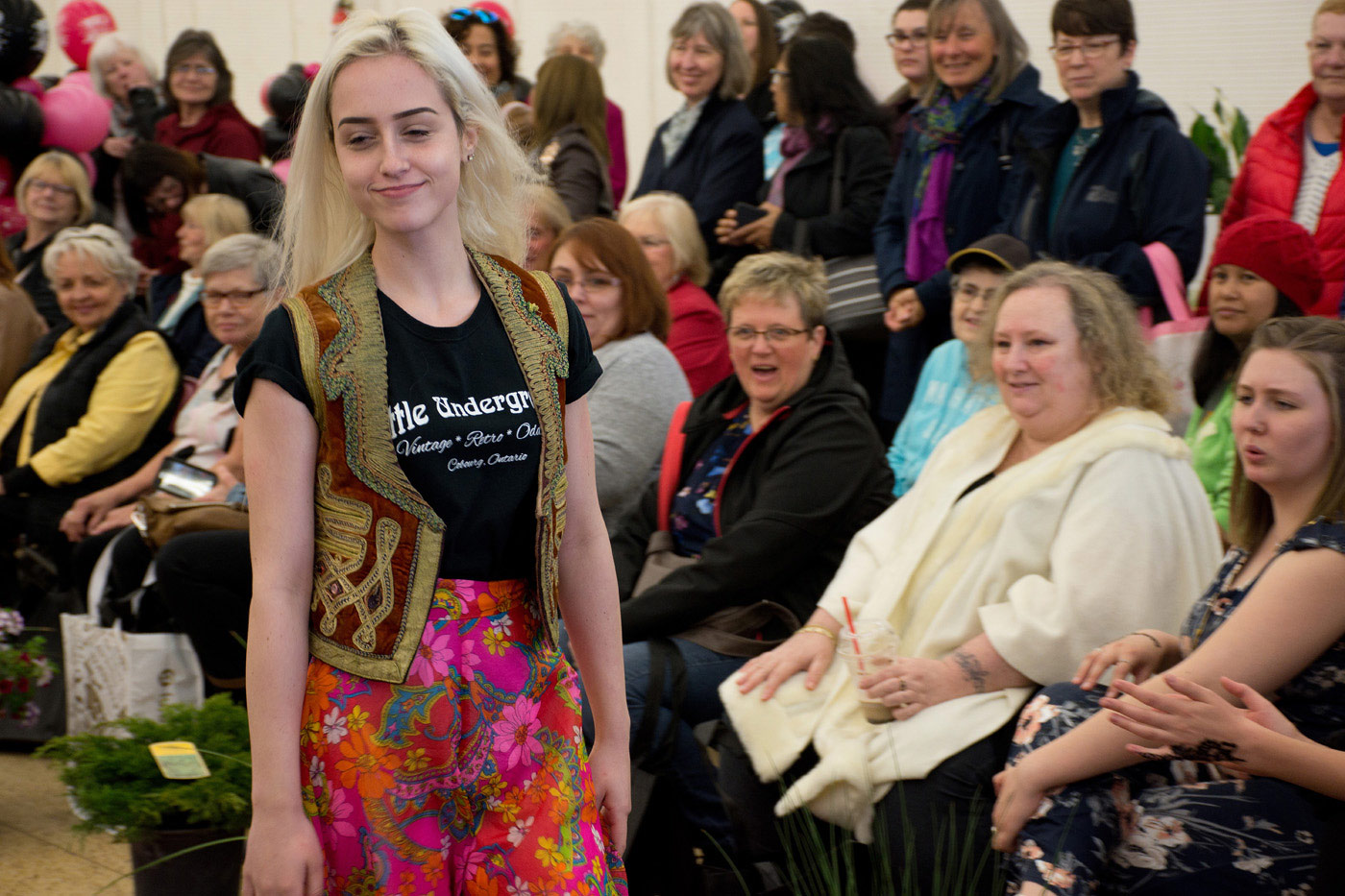 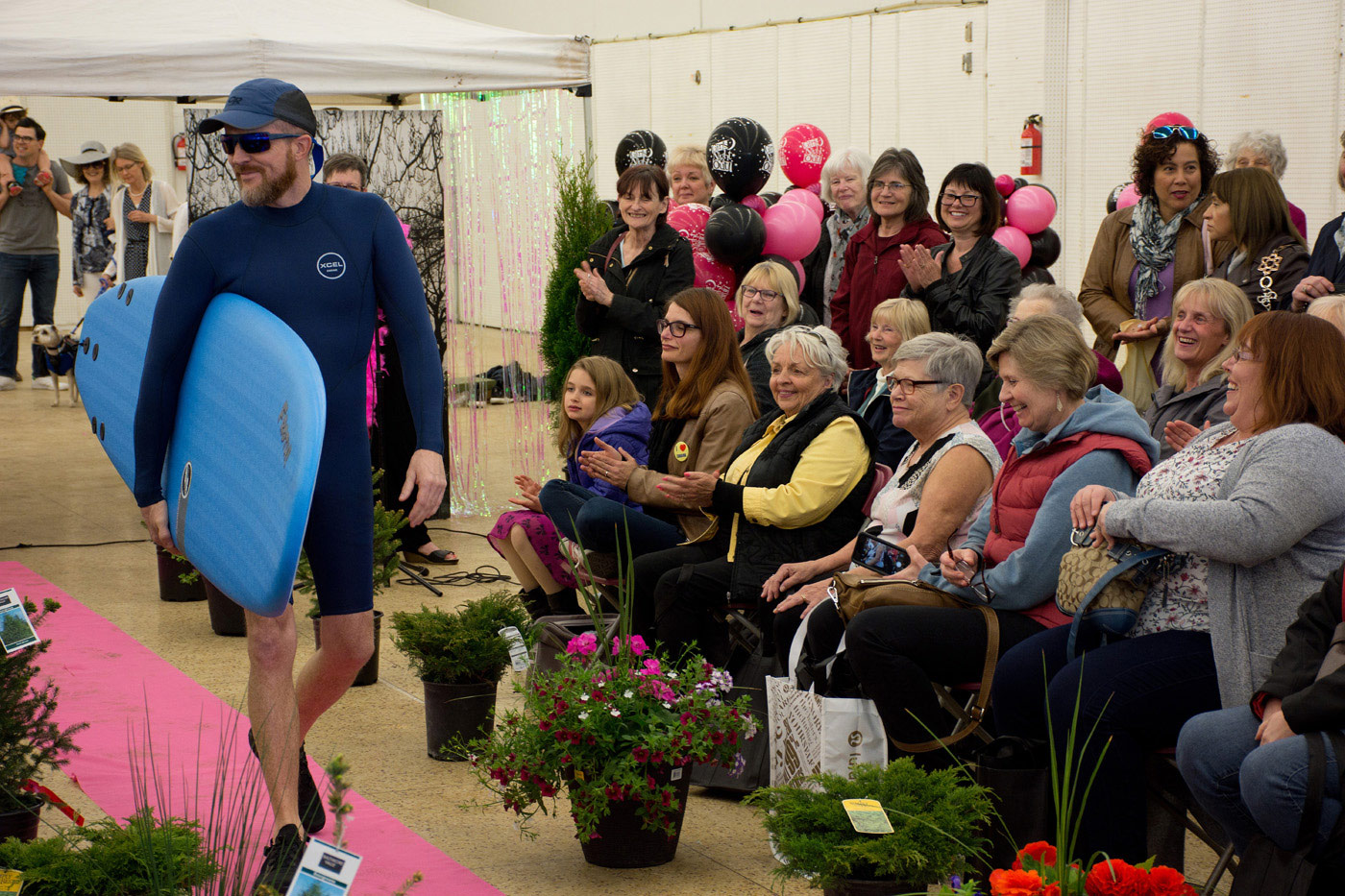 Girls Night Out - Fashion Show - one of the guys 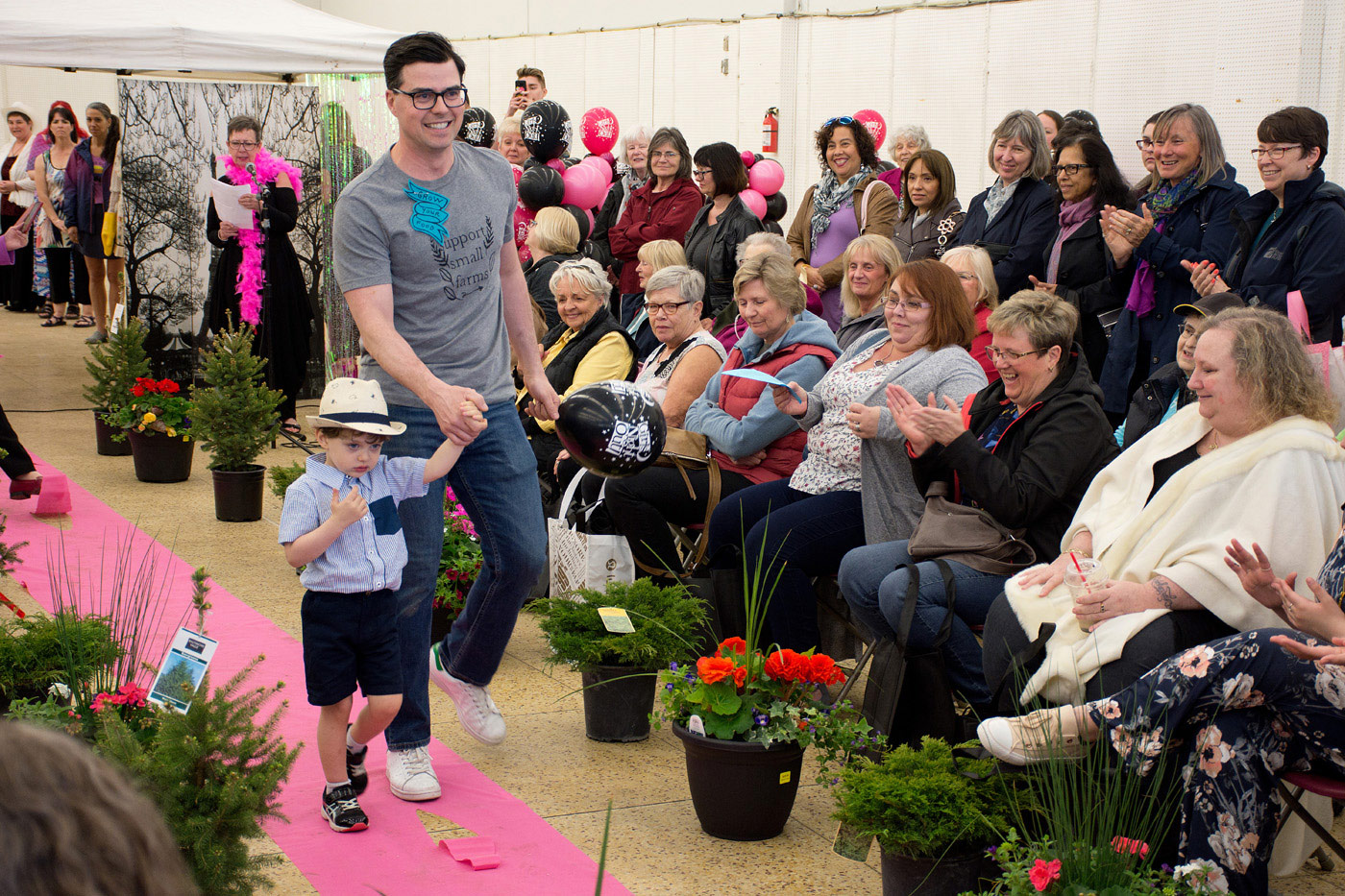 Lucas Cleveland from Market and Smor with his son 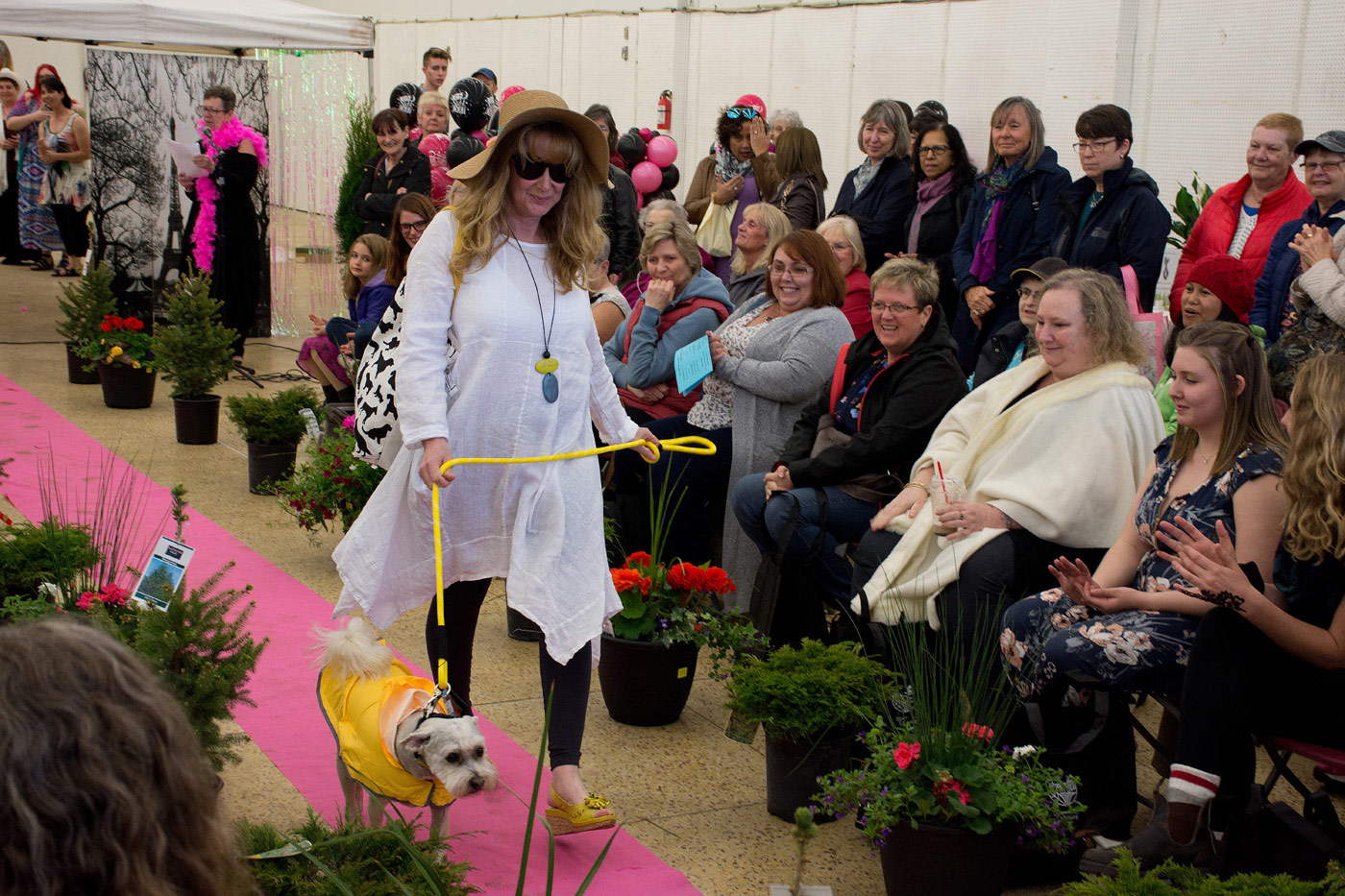 One of the dogs 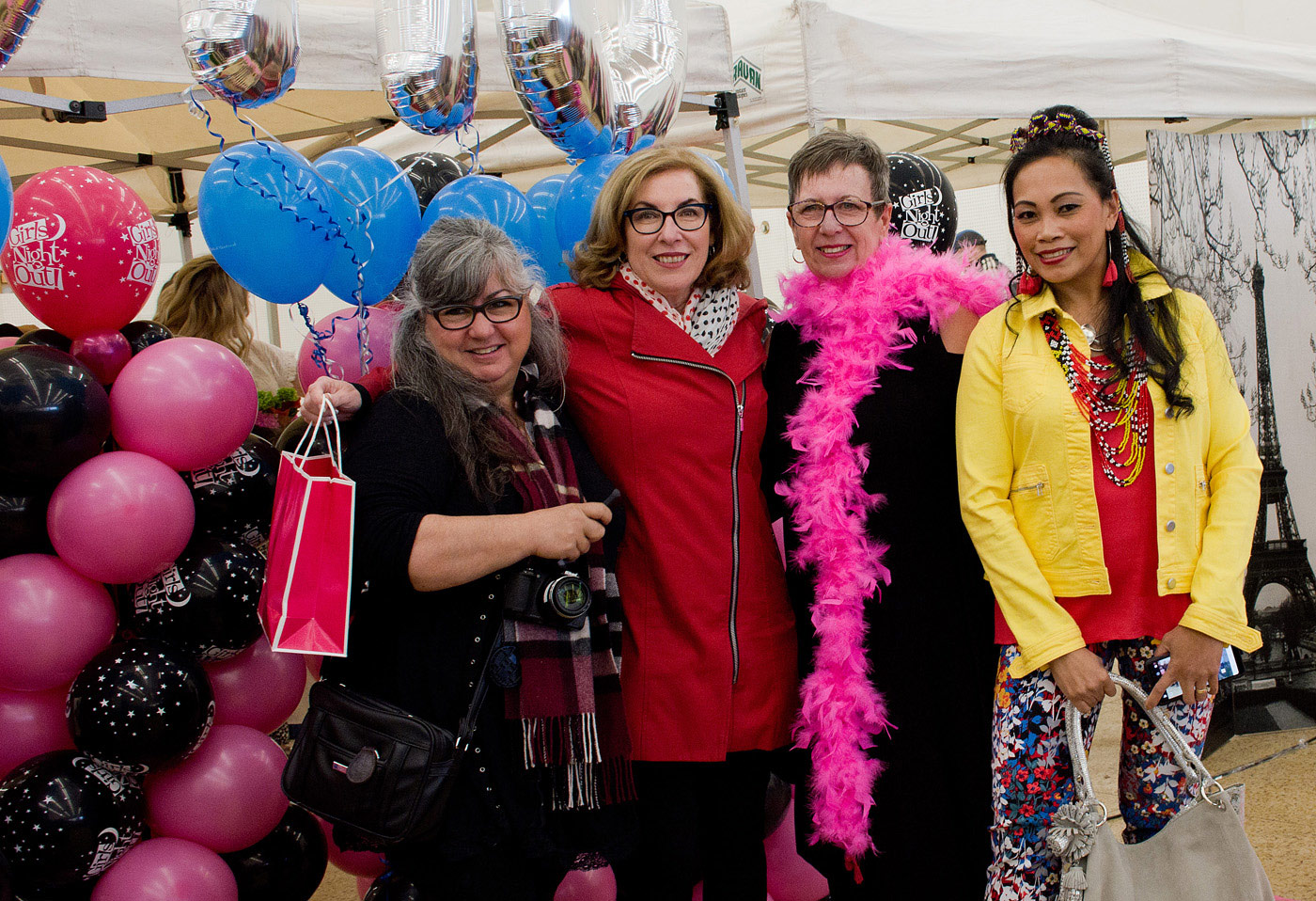 Ah yes, Manfred! You are a dreamer, but you are not the only one!
Your visionary proposal described below would do something ‘real’ for our downtown.
Some Councillors are trying to boost downtown, but their well-meant efforts seem token and band-aid.
Other Councillors are pre-occupied with keeping the waterfront condo belt exclusive. And that means excluding as many public users of the public waterfront space as possible.
What Cobourg’s Council needs is radical mojo to do something out of the ordinary, rather than constantly looking over their shoulders for approval for tweaking the status quo.

:….do something out of the ordinary,”

Oh Walter, that calls for creativity, imagination, Cobourg has a lot of individuals with those qualities. …

It was called sarbys for like a week and it was terrible. That’s the old bi-way and I’ll never refer to it as sarbys!!! It’s bi-way, bi-way or the highway!!

I just don’t get the ‘thumbs down’ on any of the comments below. You may not agree with the economic, academic discussion by some but HEY THIS WAS A SUCCESS – BE HAPPY!!!

I’m Lyndsay Lazar, the chair of the fashion show for this fabulous event. Thank you for taking such great photos! I just wanted to clarify that only one model was an owner of a local store, there were over 40 volunteer models from within our community involved in the show. I was so proud watching each and every one of them make their way down our pink carpet!

this perspective has always bothered me because I believe it to be, at best, inaccurate. I think that every business competes with every other business, regardless of what’s on the menu. My thinking stems from the reality that every customer has an upper limit to what they will spend, and very likely a finite amount of money to part with. Once a dollar is spent, wherever that may be, that dollar is no longer available to other businesses. Once all the available dollars are spent, the game’s over and the competition has concluded. Someone, all the other hopeful businesses looking to make a deal with that ‘spent-out’ customer are out of luck. Their “competition”, the successful sellers, have denied them a potential sale, regardless of what was actually purchased elsewhere. That’s why I believe that every business competes with every other business, no matter what’s on the table. To think that those vendors were not active competitors to the other merchants is simply ignoring the reality of business.

Some of the vendors were selling items not available in the stores. Therefore, they were not in competition.

you’re missing my point entirely, Elaine. It’s a competition for the available dollars, which are not unlimited, and not about the purchased items. Once spent, a dollar is no longer available to purchase something totally different. It doesn’t matter what’s being bought, it’s about the inability to buy anything else once you’ve spent your dollars on whatever.

Totally agree about the ‘vendors’. Consumer dollars are finite and the stuff vendors usually sell looks like it fell off a truck somewhere.
And what are ‘police’ in bullet proof vests doing at a fashion show?
And Sarby’s is an eyesore right across the street from our Victoria Hall. Should be torn down and replaced by a Hoffmanized building that fits into the streetscape.

a St. Lawrence Market style building and setup would be the ‘perfect’ use of that space, on the ground floor. Second floor would be professional, legal, real estate, financial services offices all around the perimeter of a central open space, much like a mezzanine concept, looking down into the market on the first floor. Third floor would be a high end restaurant with a large patio looking across to Victoria Hall and the harbour view down Second Street. Each floor would have same-level access to the 3-level parking facility that should be built on the Covert Street parking lot, which would have a green space on the “roof”, complete with gardens and trees, as a community green space in the middle of the central commercial core. The actual building would front on King Street AND on Covert Street, and access the Covert Street lot at every level.

That sounds wonderful! Who would pay for it?

as with any “developement”, the property owner or an investment consortium would “pay for it”, to answer your question most directly, Dubious. Spaces would be leased. My suggestion is based on a private property development, like all the other business properties downtown. I would think, though, that the Town would be very willing to do what it could, to make something as vibrant as this happen. I put this idea forward way back when Kevin Narraway was the town’s business development consultant a number of years ago, and I firmly believe it still holds great promise for the downtown.

The Girl’s Night Out Fashion show was created and organized by Lyndsay Lazar from Evolve Design pop-up shop, together with a small sub-committee. We would like to thank Lyndsay, our local merchants who provided clothing and shoes, Melissa Graham, DBIA chair Joan Greaves, Gillian Berridge, our many dedicated volunteers and a special thank you to our sponsor BMO Financial Group for making our annual Girl’s Night Out a great success. It was fun seeing so many ladies enjoying themselves on a Friday night in Downtown Cobourg!