In 2010, Community Care Northumberland started Hospice Services but it was always based on going to where the patient was – at home, Hospital, retirement home or long term care facility.  But today, work on a live-in Hospice Care centre started.  Money has been raised, a site selected and committees have been formed for organizing, fundraising and designing/managing the building.  This has been reported in earlier articles – see links below – but now an architect has designed a building (perhaps the best in Ontario) and a contract awarded for the work to be done.  Officially called a groundbreaking, all the organizers, major donors and politicians were on hand to thank and be thanked. Being a groundbreaking, there was a full-size machine plus a collection of ceremonial shovels.

About a hundred people listened to speeches under a marquee on the site on Ontario Street in Hamilton Township.  Julie Bothwell from the Alderville First Nations was first and as is now a tradition, she spoke about how the lands were traditionally their land. However,  she also spoke movingly how in the indigenous tradition, the clients of a Hospice centre were not ending their life but starting a new one in the circle of life.

The MC was Trish Baird, Executive Director of Community Care Northumberland.  She explained to me that this Hospice (Ed’s House) will be different to many others since it will be a hub for Hospice care activity in Northumberland rather than a stand-alone operation.  The 6 beds and other Hospice activities will cost around $1m a year to run – of this, $630K will come from the Provincial Government and the rest will be from donations.  Trish likened this to the Hospital which relies on donations for a significant part of its financing.  The same is already true of Community Care which only gets around 60% of its funding from the Provincial Government.

Although only six beds will operate initially, the building will have space for 10.  The building cost is estimated at $8M.

Fundraising joint Chairs Patti and Gord Ley thanked all the donors – especially Brian and Kym Read ($1m) and Eda and Diane Lorenz ($1.5M).   Gord also announced that the Contract for the work of building Ed’s House will go to Dalren Construction.  They are a local contractor and President Matt James said that he will be hiring locally and that local lumber, concrete and sub-contractors would benefit from the work.

MPP David Piccini thanked everyone involved and acknowledged that the project spanned two Governments: he thanked Lou Rinaldi for his effort.  Bill Cane, Mayor of Hamilton Township, noted that this was one occasion when Liberals and Conservatives agreed! He also thanked the Town of Cobourg for extending Cobourg Town water to the property.  Perhaps coincidentally, at their Council meeting on Tuesday, the Town of Cobourg presented Ed’s House campaign with the first of four annual cheques for $60K.  See photo below.

After the speeches, all the people involved did the ceremonial groundbreaking with shiny new shovels.  Some brought their own; Mayor John Henderson showed his “Town of Cobourg” spade which he said has now been reused about 20 times.

There were too many contributors and supporters to capture in one Photo.  At top right is the first one taken and below are a selection of others from the event. 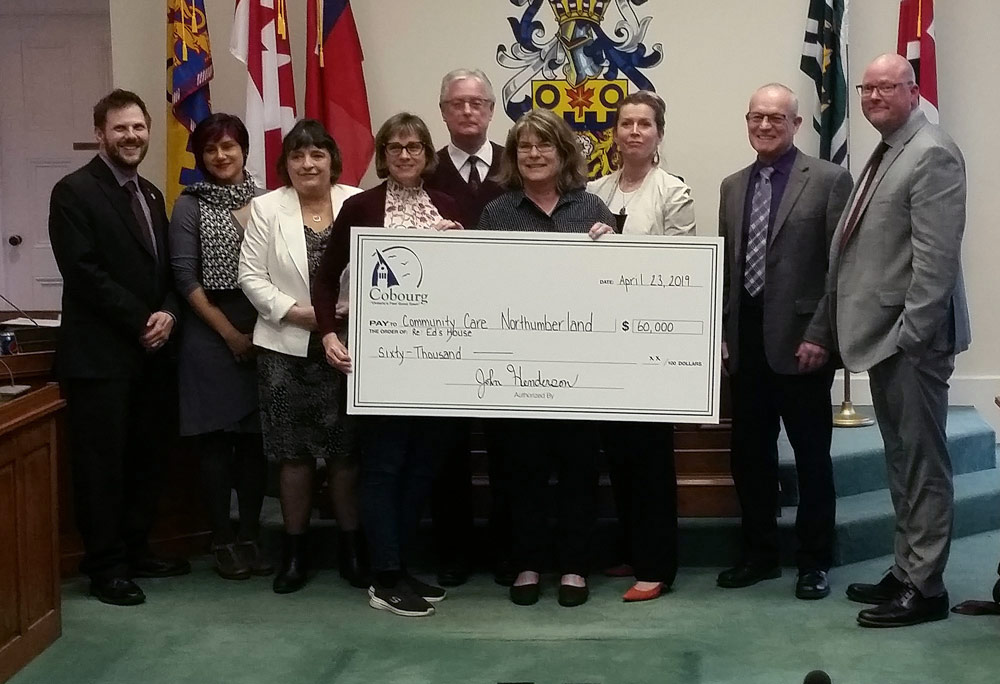 Cheque from Town of Cobourg for Ed's house 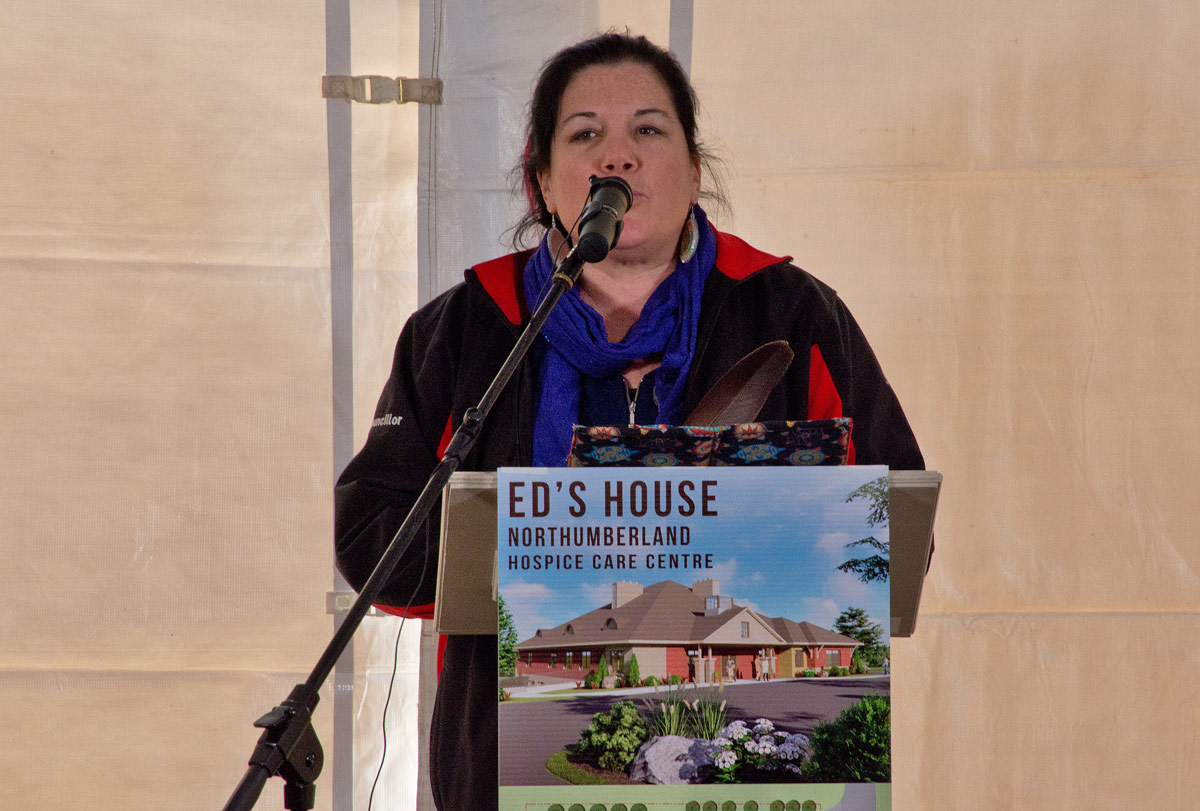 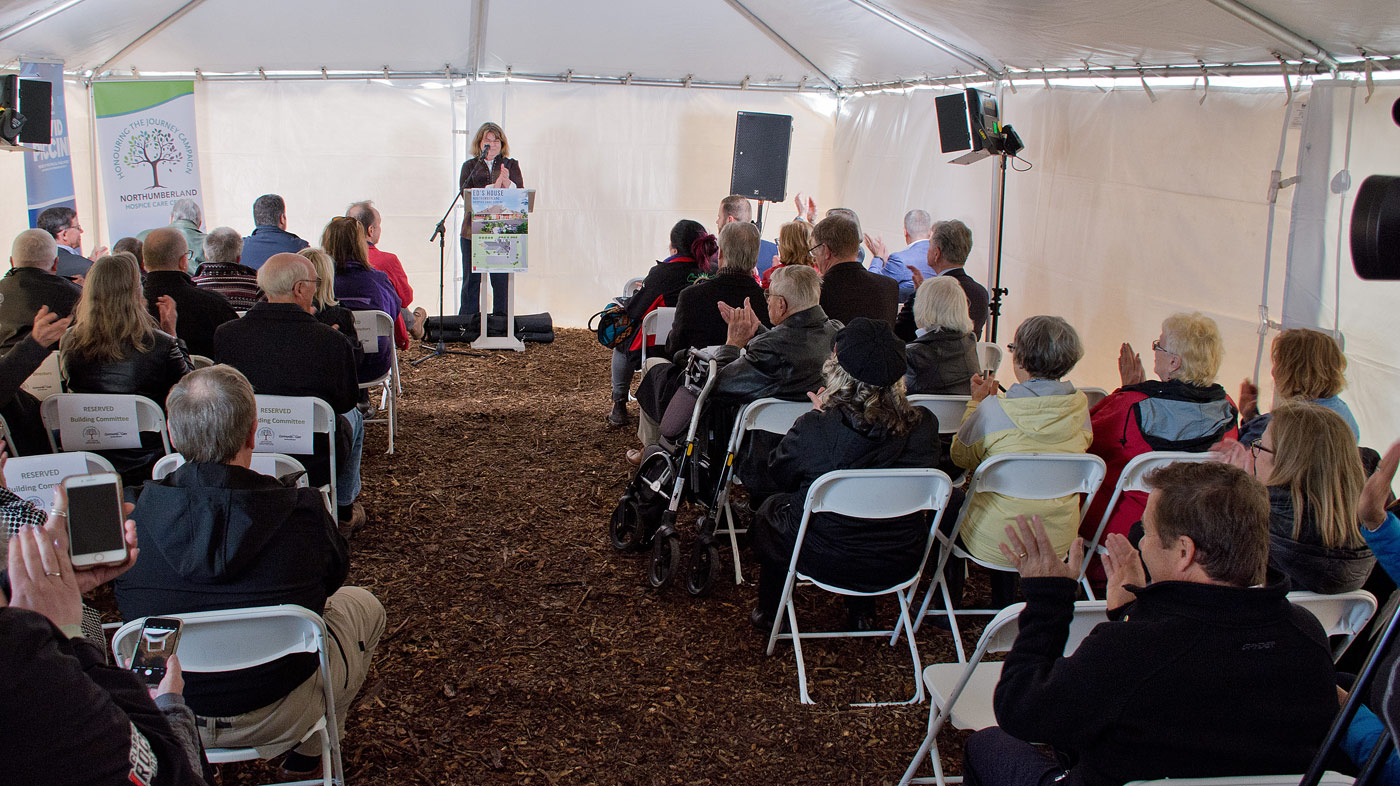 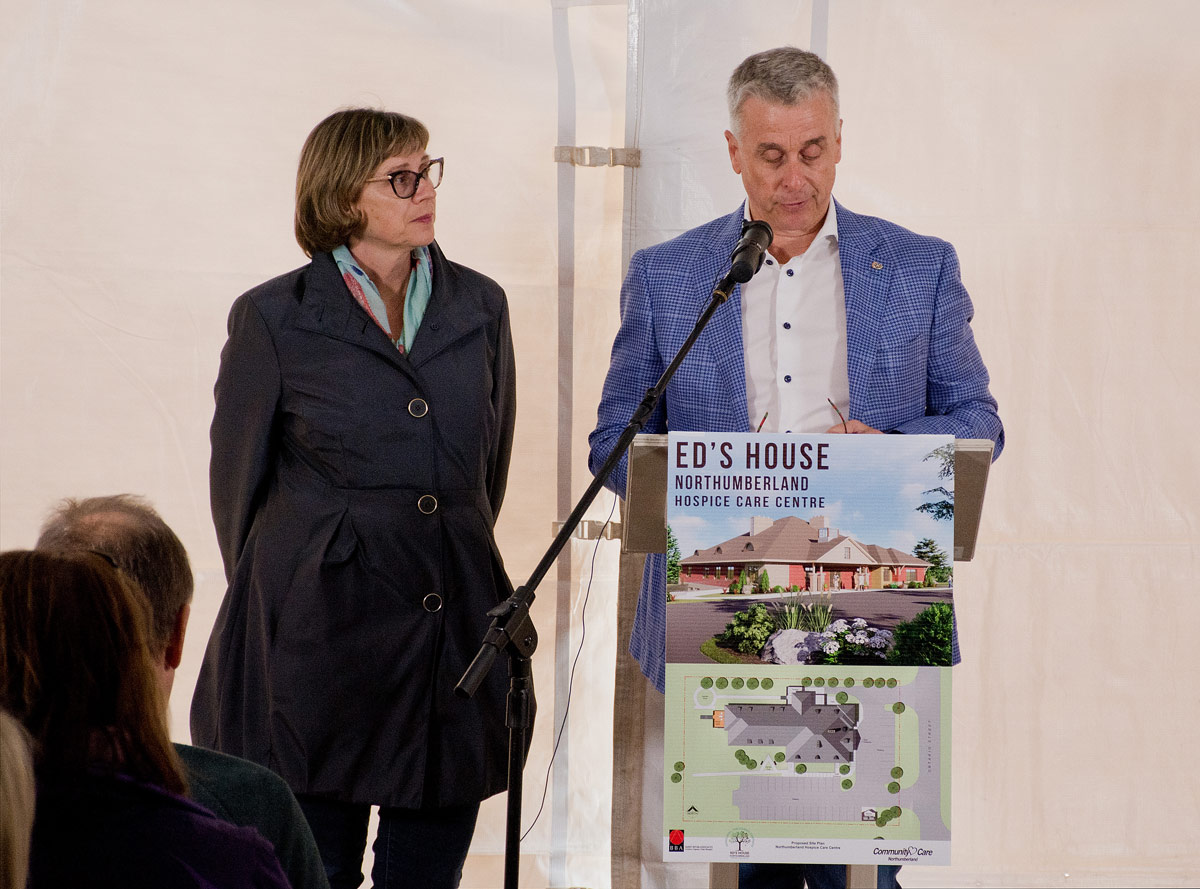 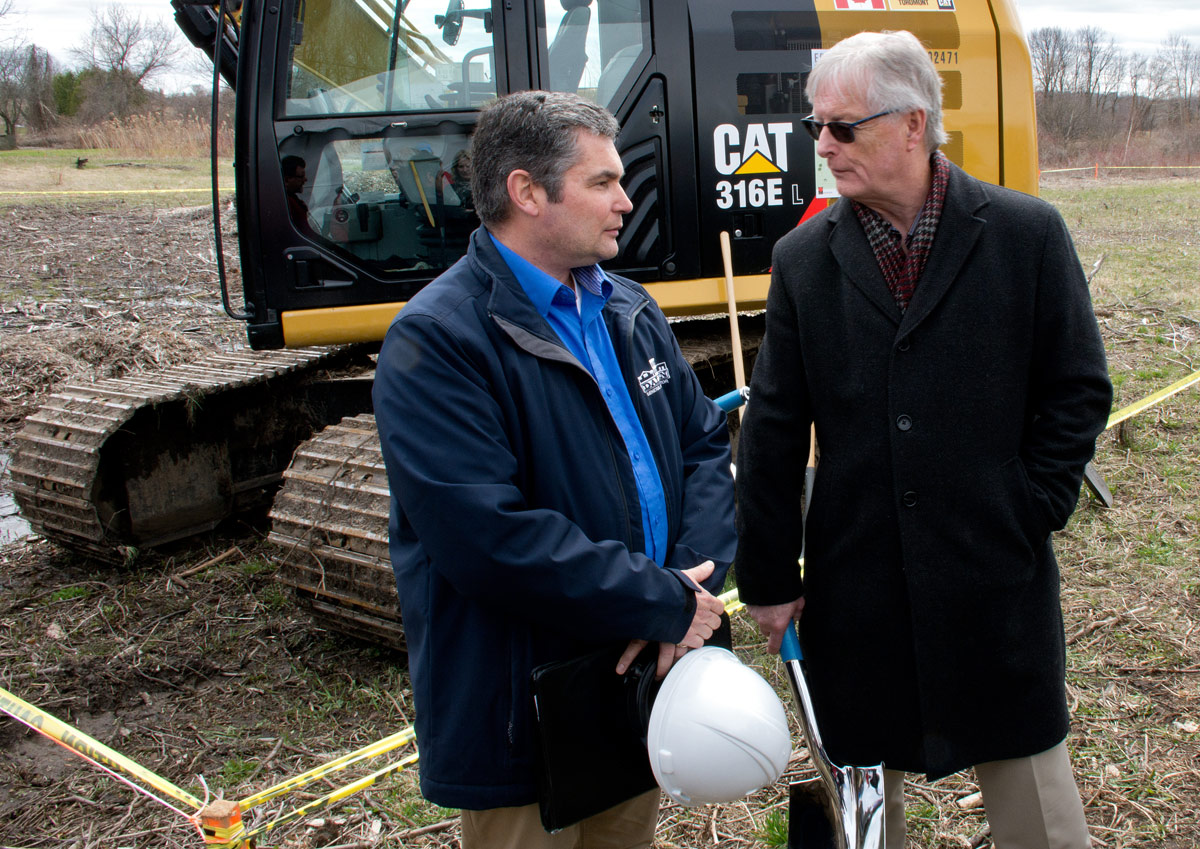 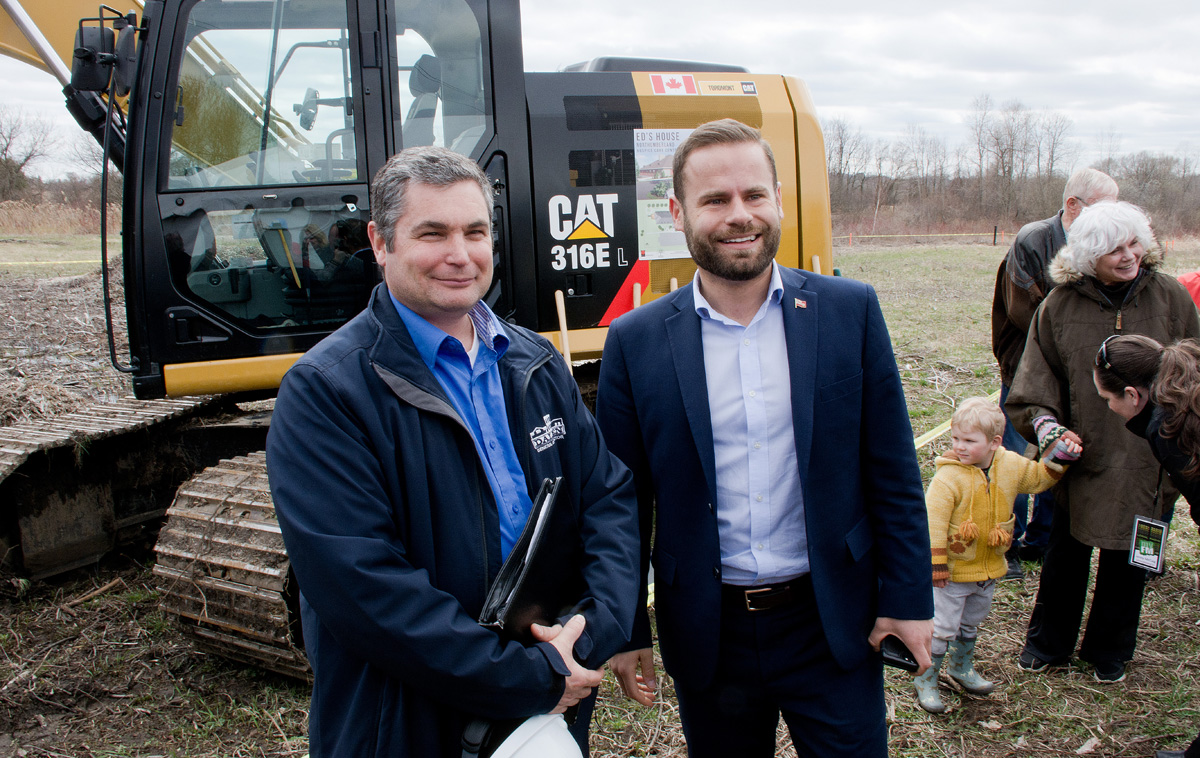 As a founding member of Hospice Northumberland Lakeshore I would like to see recognition of the original hospice organization. Initiated in 1994 by Dr. R. S. Scott and the late Colin Dowsett, we went from 23 trained volunteers for 16 clients the first year to 164 trained volunteers giving 10,000 hours to 349 clients before being amalgamated into Community Care in 2010. 15 active years of fundraising provided this needed service which will now become all we hoped to eventually achieve.

According to the Conference Board of Canada, volunteer contribution was valued at $55.9 billion in 2017 equivalent to 2.6% of GDP and if volunteering were an industry it would employ nearly as many people as those working in education. Further, a value on volunteering (non-profit sector) at about $27 an hour (2017).

Thank you Janice for sharing the information in your post about the hospice volunteers and their service to the local community. Their contribution appears to be easily in the value of several millions of dollars, an amazing foundation of support to the project taking shape today.

Thank you Jan for the historical note re Hospice. Our long term dream is now being fulfilled.

I have been watching this plan develop and just wondering where the site is. I have not seen the address published so far.

“…the Hospice…will be located on Ontario Street north of the 401 in Hamilton Township.”
https://www.cobourgblog.com/news-2018/good-news-at-launch-of-hospice-fundraising/

On the West side of Ontario Street, north of the 401, south of Alliance Church, across from Oliver’s Lane gate – look for Large sign and lots of activity!!