With short notice to most of us, Justin Trudeau came to Cobourg today to help Kim Rudd with her campaign. This follows the visit by Conservative Leader Andrew Scheer about 3 weeks ago. There were two bus loads – one with media and the other with Justin and his staff. Somewhere in there were security people and of course two Cobourg police were standing by.  Justin stopped by the Buttermilk Café and spoke to a number of patrons – all seemed pleased to see him and many wanted photos. There were a lot more media people than for Scheer on his visit but maybe that’s because the writ has now dropped – see the photos.  After the Buttermilk, Justin walked down King Street to the Black Cat where he again spoke to patrons.

He then went outside and there was a brief media scrum where he answered questions which will no doubt be featured on the National News tonight.

He then walked around the corner to the Kim Rudd Campaign office on Division Street where he made a brief appearance to those waiting.  There was a lineup outside on the sidewalk – there was no way everyone would have got inside.  Kim told me that she’s been doing a lot of knocking on doors and said she really likes doing that.  She said she feels more relaxed this time around.

At 2:30 pm Justin and his crew were back on the bus and gone – his visit took about 30 minutes total.

As usual, click any image to enlarge it and start the slide show. 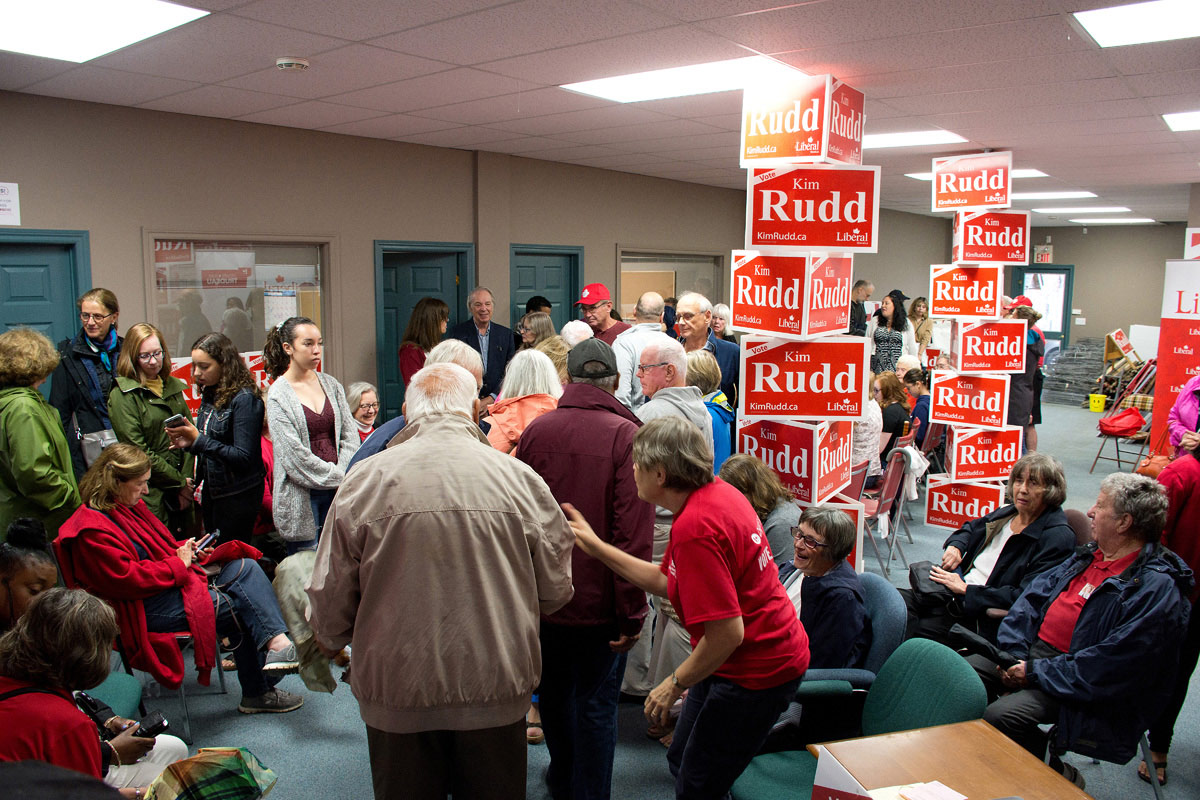 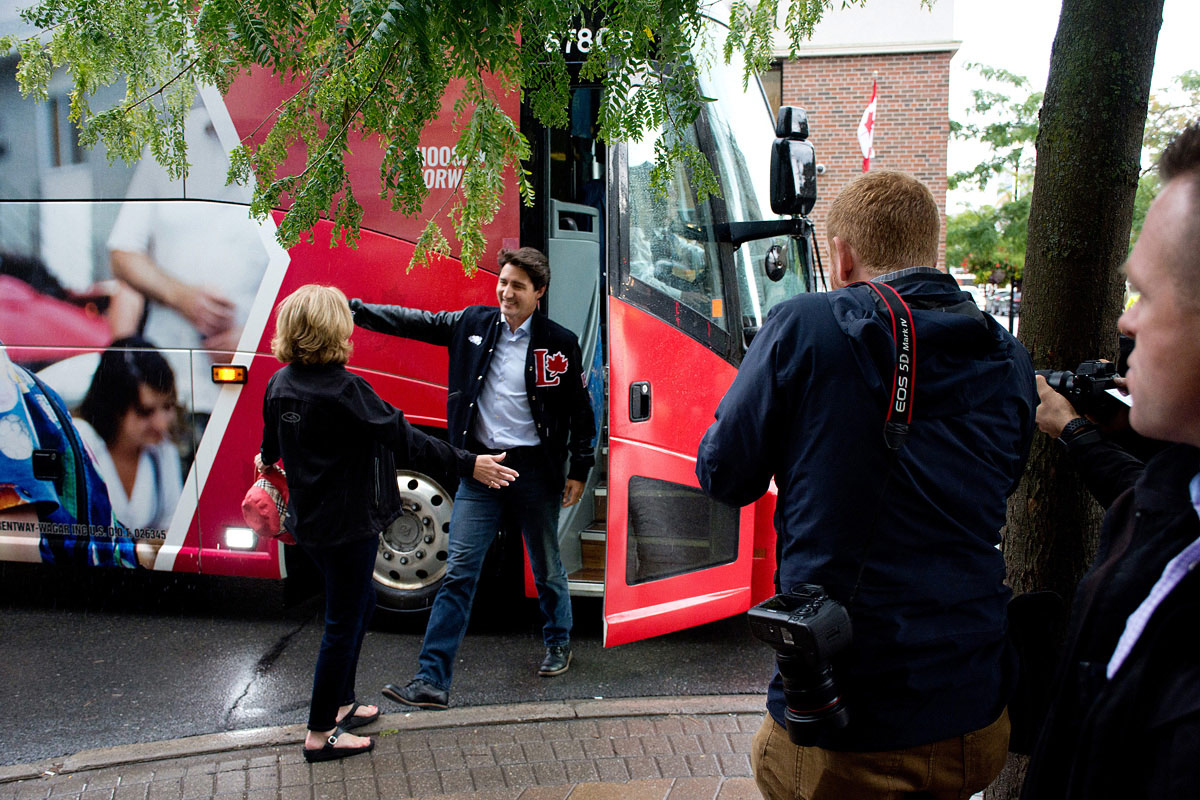 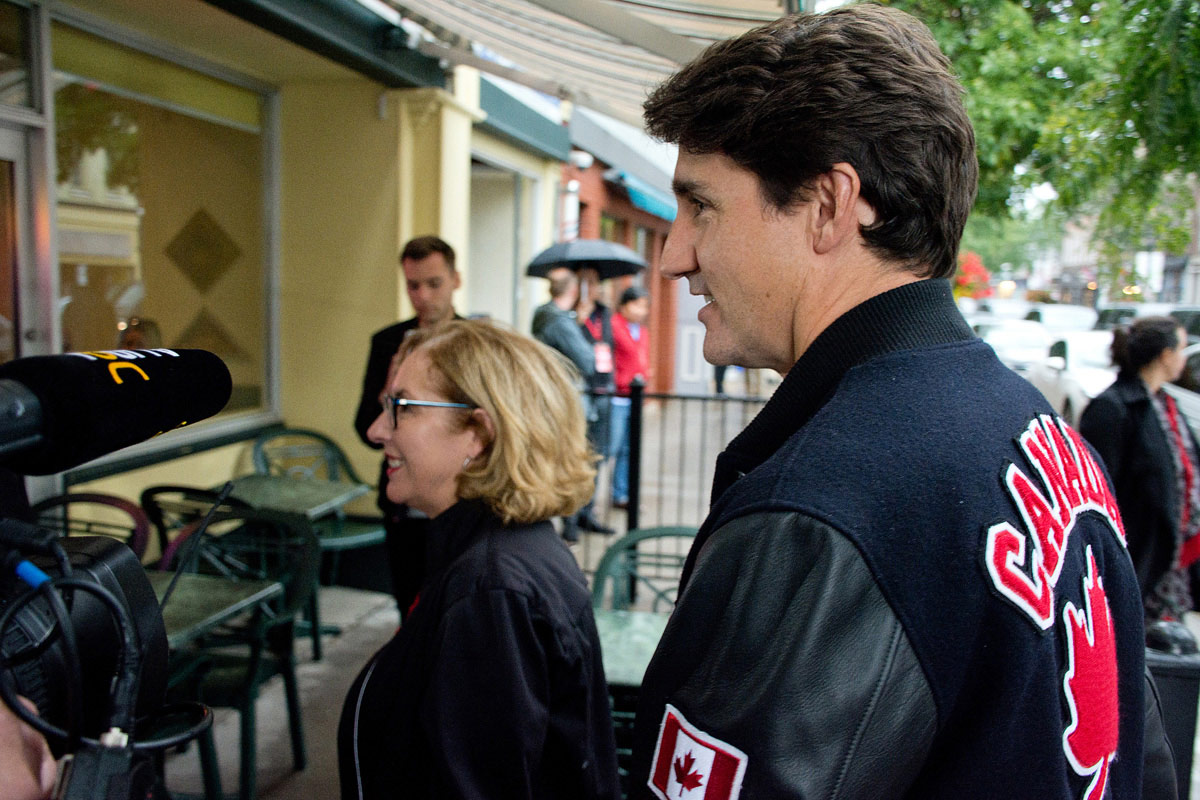 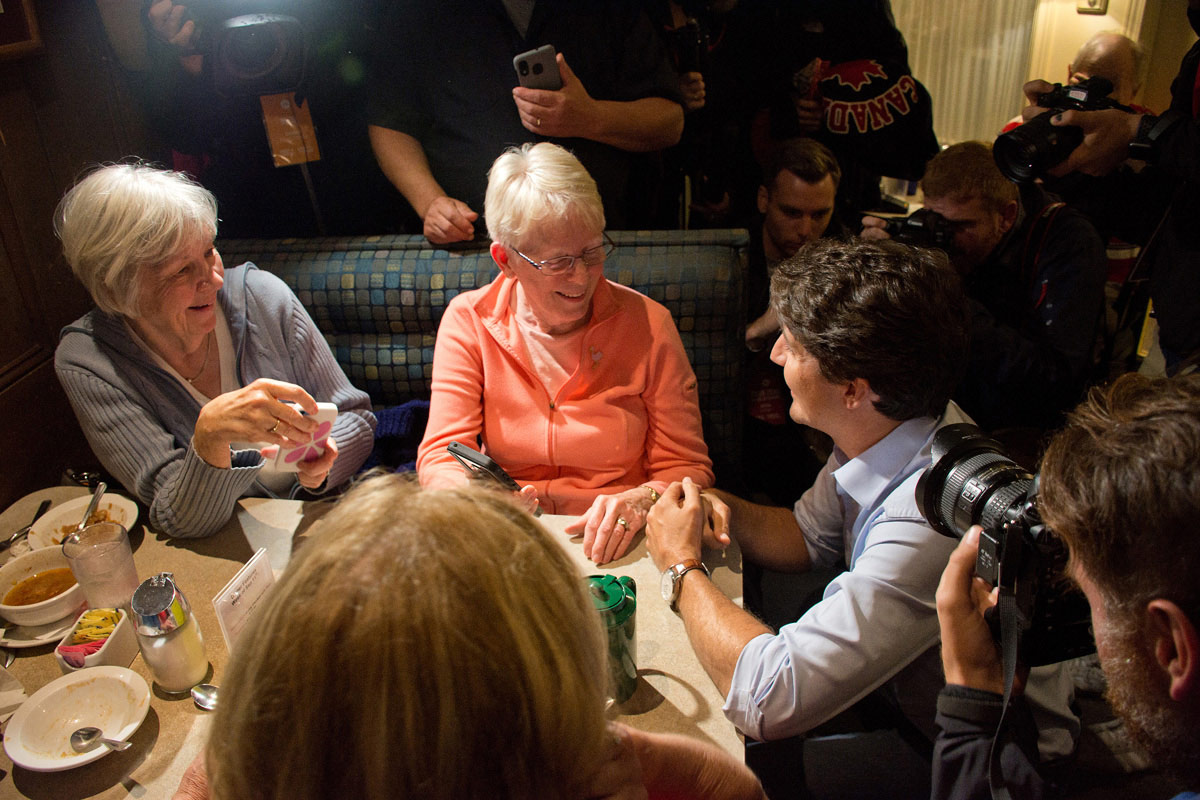 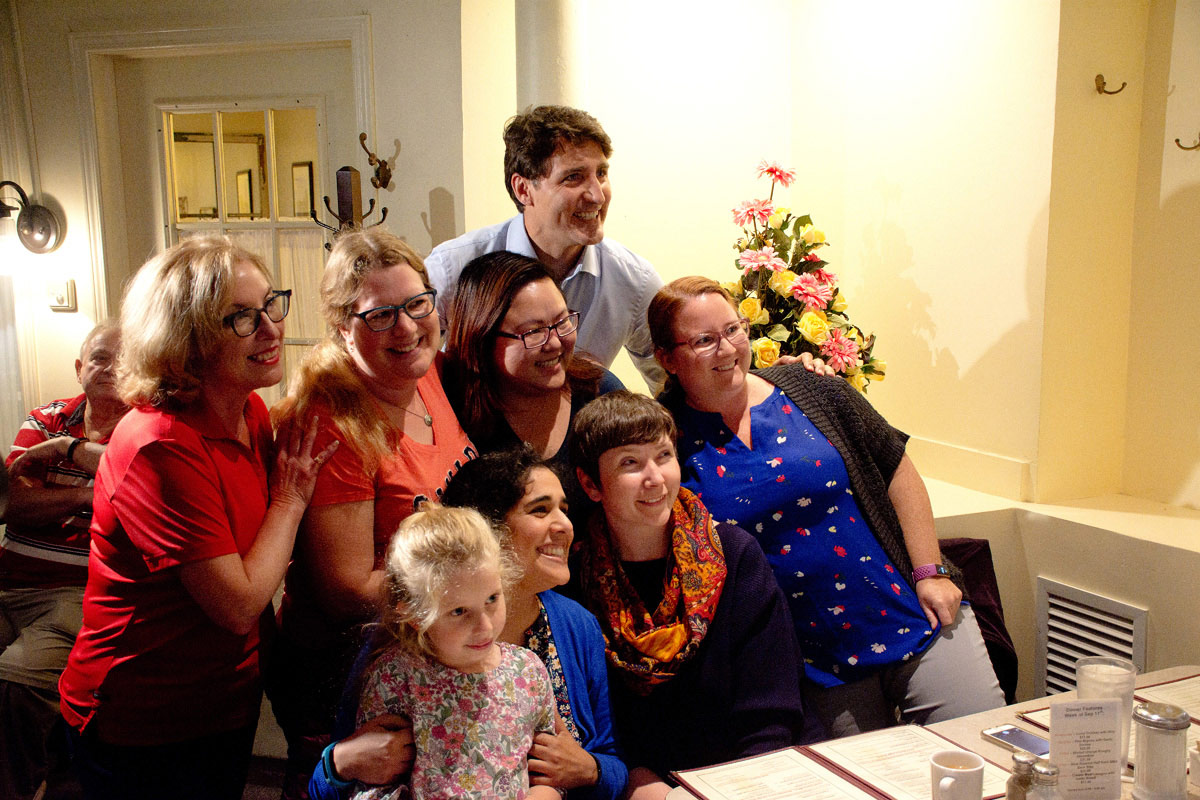 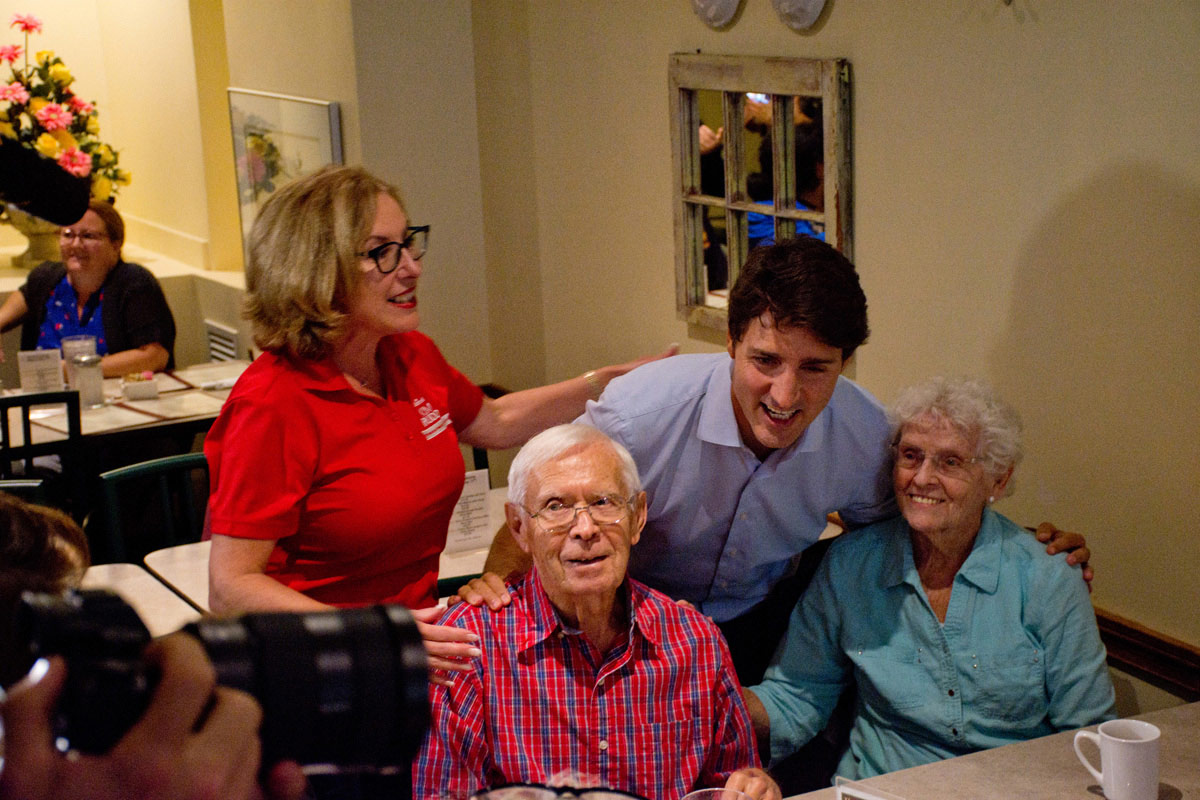 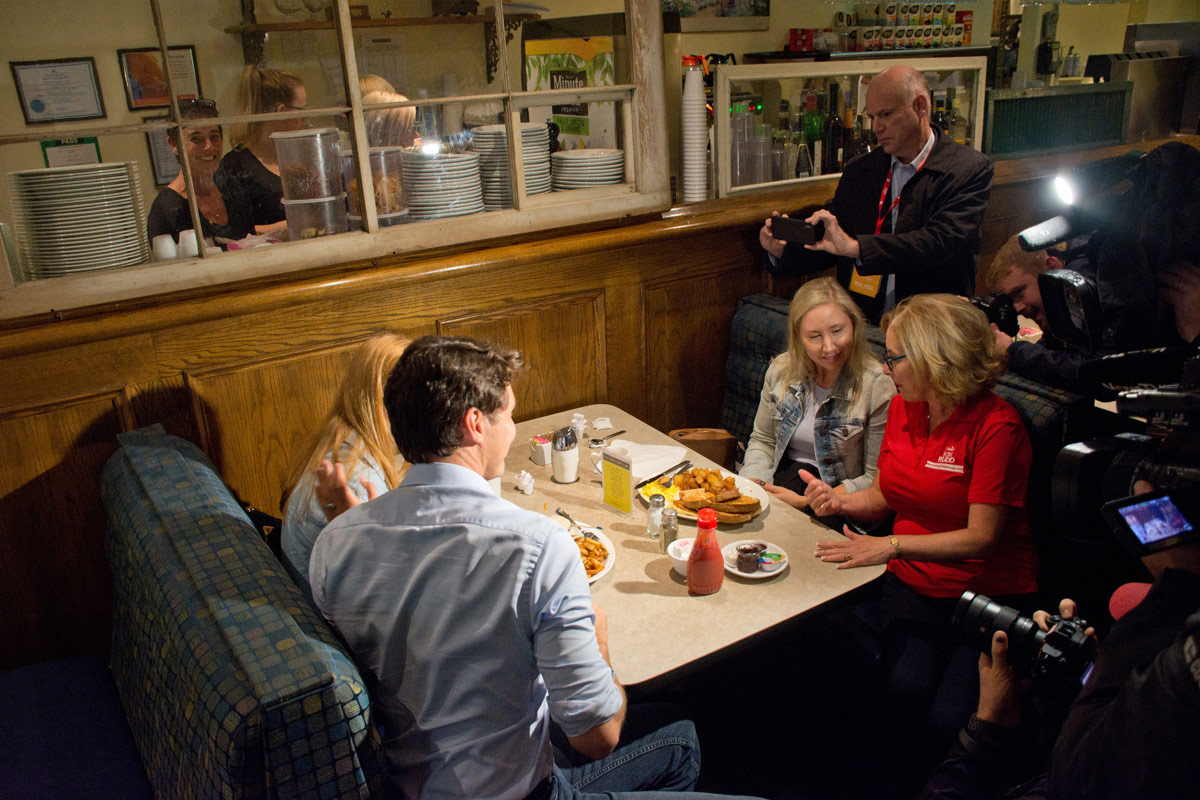 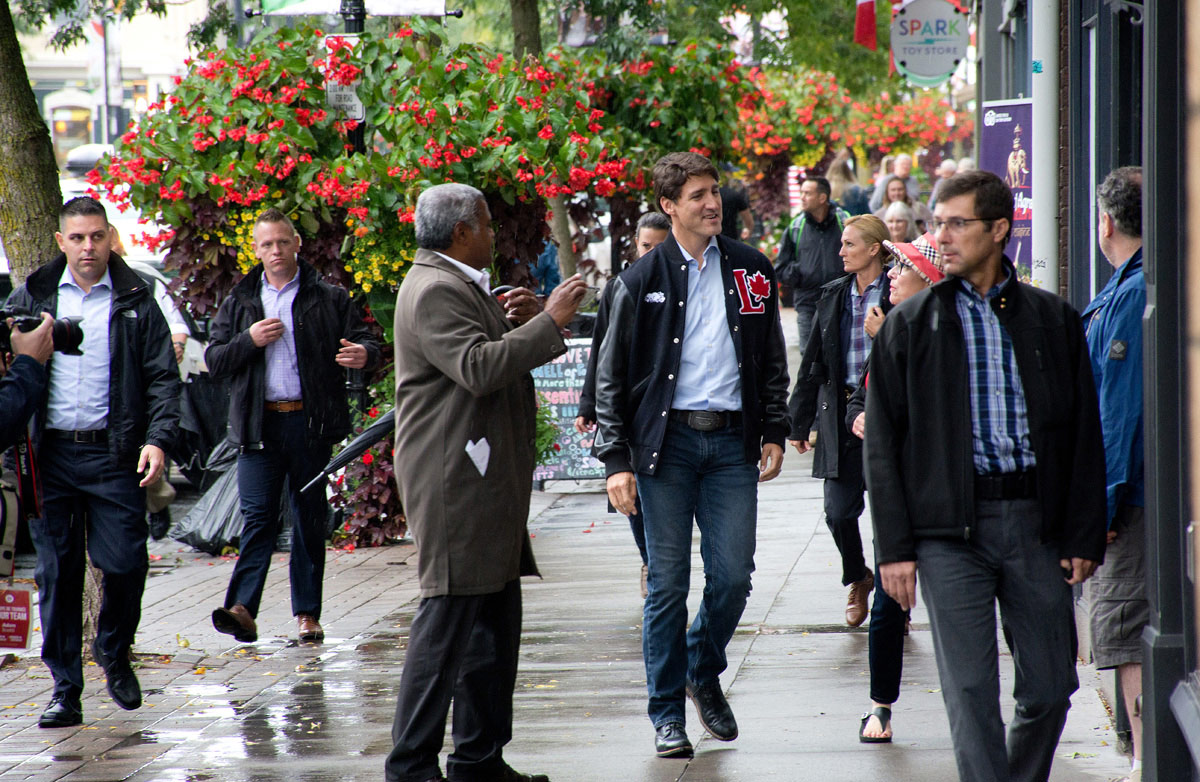 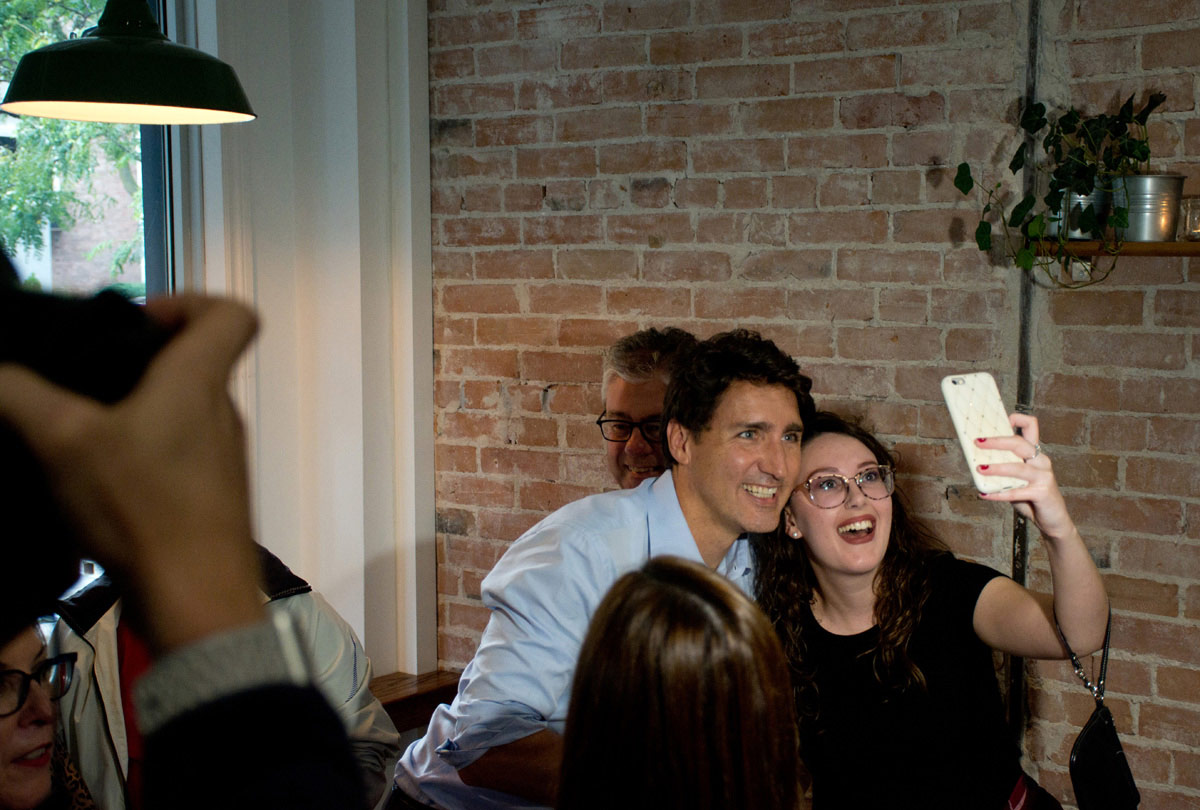 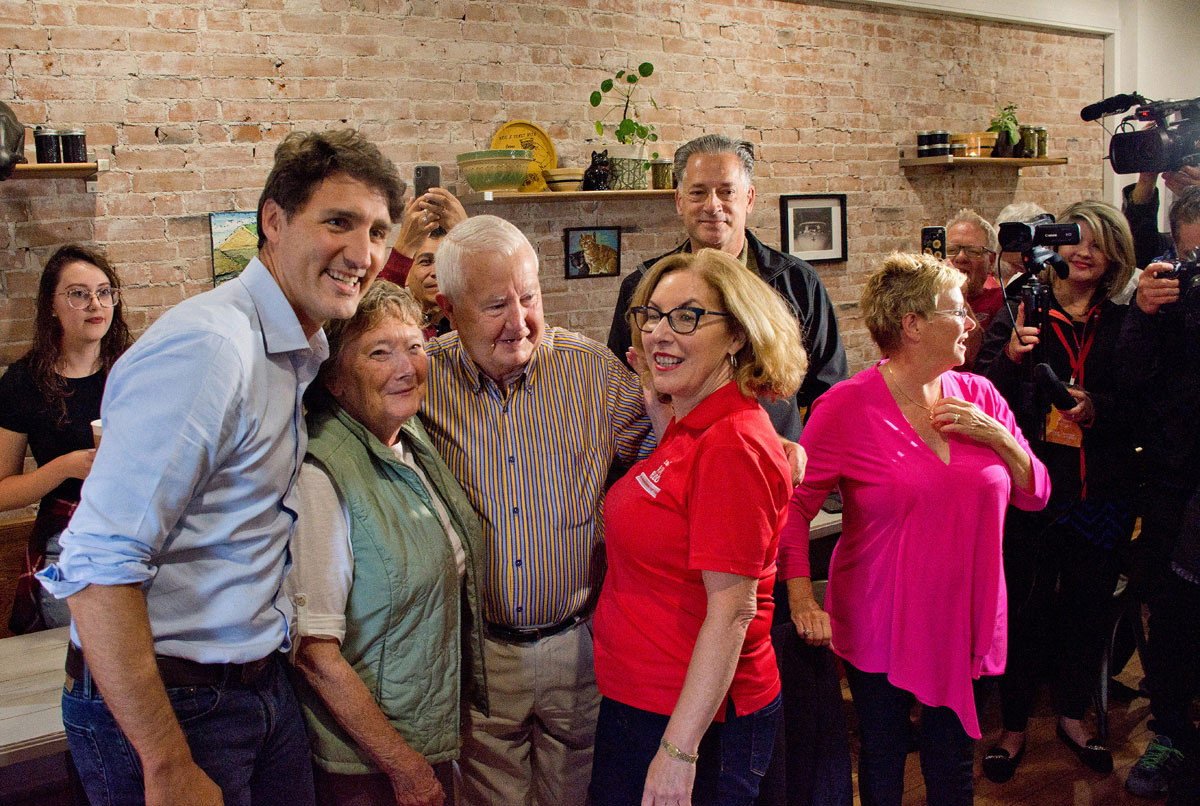 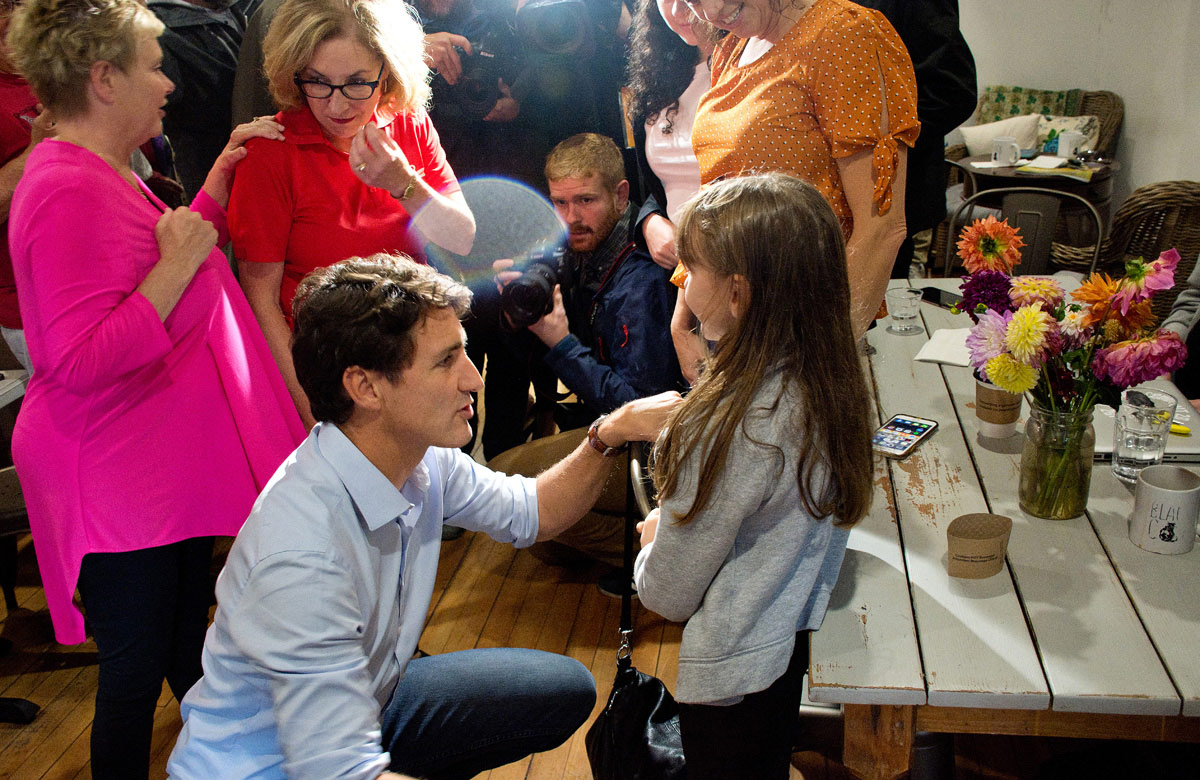 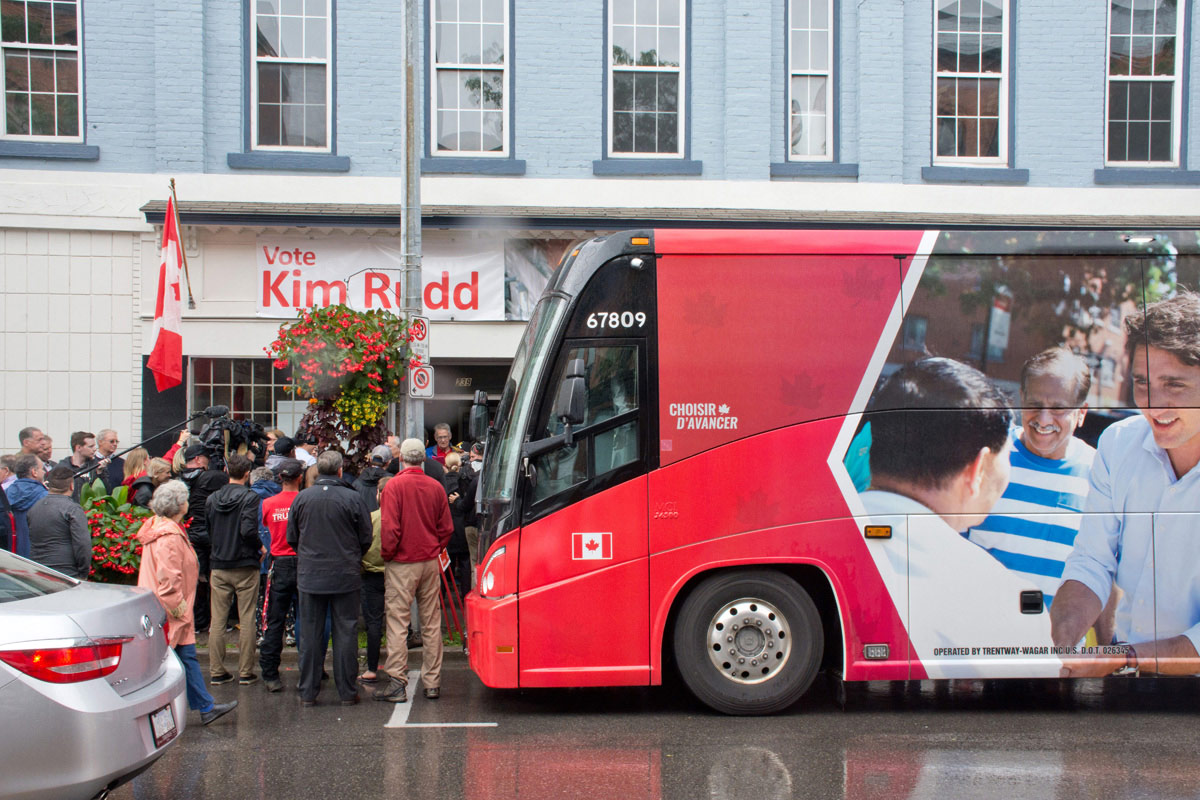 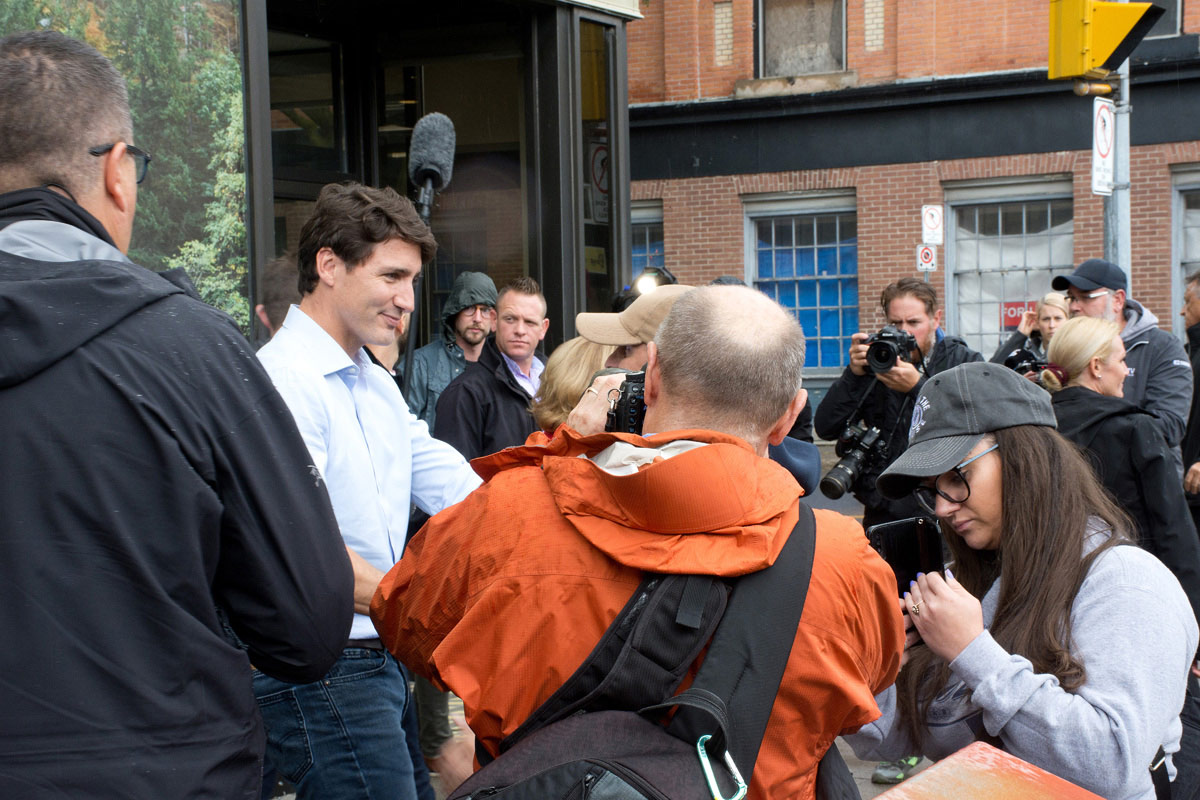 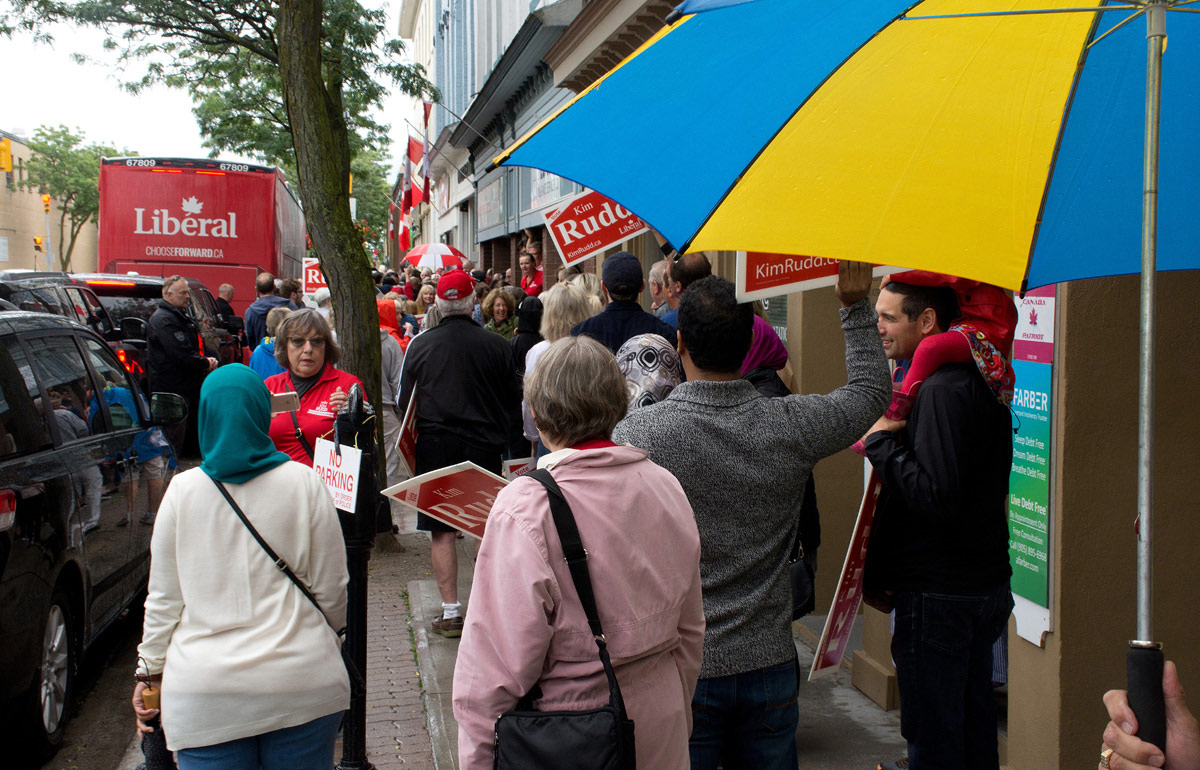 I saw your previous comment otherwise I would not have replied. There was no bias that I read in John’s coverage. It most certainly wasn’t partisan as you assert. If you want partisan Liberal coverage just read the Toronto Star or its weekly local paper.
Give it a rest. Take a valium and calm down.

All comments by that commenter have been deleted and he has been banned. Thanks to those who were supportive of my work. Slander of the blog operator is also not allowed.

Your previous and current comments are uncalled for. John provides a valuable community news service to Cobourg residents free of charge. If you don’t like his reporting don’t visit his Blog. Go start your own.
Is this typical of the Liberal war room? Always negative and attacking people who you disagree with.

The police were on hand to keep an eye on him. Police don’t like criminals.

maybe he could have had his friends at SNC Lavalin engineer a east pier & campground repair?

Why is suggesting getting help from one of Canada’s premier engineering firms partisan?

because you probably wrote with tongue in cheek – still partisan!

it was tongue in cheek! it seems many readers of Johns Blog have THICK SKIN?