On Friday November 8, Cobourg’s memorial to those who fought and died in the war in Afghanistan was unveiled.  The workhorse of the Canadian troops, the LAV III (Light Armoured Vehicle), not quite a tank, was a Canadian manufactured armoured troop transport with a 25 mm gun described as “fast, armoured and packed a punch” so it is a fitting tribute to the 40,000 soldiers deployed and the 162 Canadians who died (158 military).  Displayed is a replica consisting of an actual “hull” donated by the Federal Government then mounted complete with plaques and signs indicating what it’s about.  It’s located just south of the Cobourg Community Centre on D’Arcy Street.  The Highway of Heroes is also memorialized with a description of it on a prominent sign – see photos below and the full text of the sign in the links below.

The concept was suggested by and managed by Canada Company and has so far been deployed in 30 locations across Canada, primarily Ontario. The cost to Cobourg is about $50,000 – $7K to $10K from the Town’s 2018 budget (Source of funds Northam Reserves) and the remaining $35K to $40K to come from donations from the community (see list below).

The location (700 D’Arcy Street) was the site of the No. 26 Ordnance Depot of the Royal Canadian Ordnance Corps from 1954 to 1970.  Details are on the sign (see photo) and the text on that sign is provided in the links below.

The unveiling ceremony was well attended and impressive.  It started with a fly-by of a Hercules from Trenton AFB then the Cobourg Legion escorted the speakers down the road which was blocked off by Police.  The National Anthem was sung by the Oriana Singers and the MC was Major J.S. Andre Turcotte, CD.  Andre introduced MPP David Piccini, Mayor John Henderson, Blake C. Goldring, Founder of Canada Company, LCol Guy Parisien, Aerospace and Telecommunications Engineering Support Squadron, Major Roy Van Den Berg, Hastings and Prince Edward Regiment (the local Reserve Regiment) and Padre Art King, Cobourg Legion Branch 133.  Each spoke for about 5 minutes to a crowd of sponsors, military personnel and citizens with some sheltered in a marquee – although there was no rain or snow despite the fact that it was cold enough for snow.

The Last Post was played magnificently by Chris Devlin and the Piper’s Lament was well played by lone piper Mary Ito (see photo).

The vehicle was then unveiled by the donors.

Three wreaths were then laid to honour:

The Concert Band of Cobourg wound up the event by playing “God Save the Queen”.

In conclusion, the Legion marched back to the CCC escorting the speakers to a public reception there. 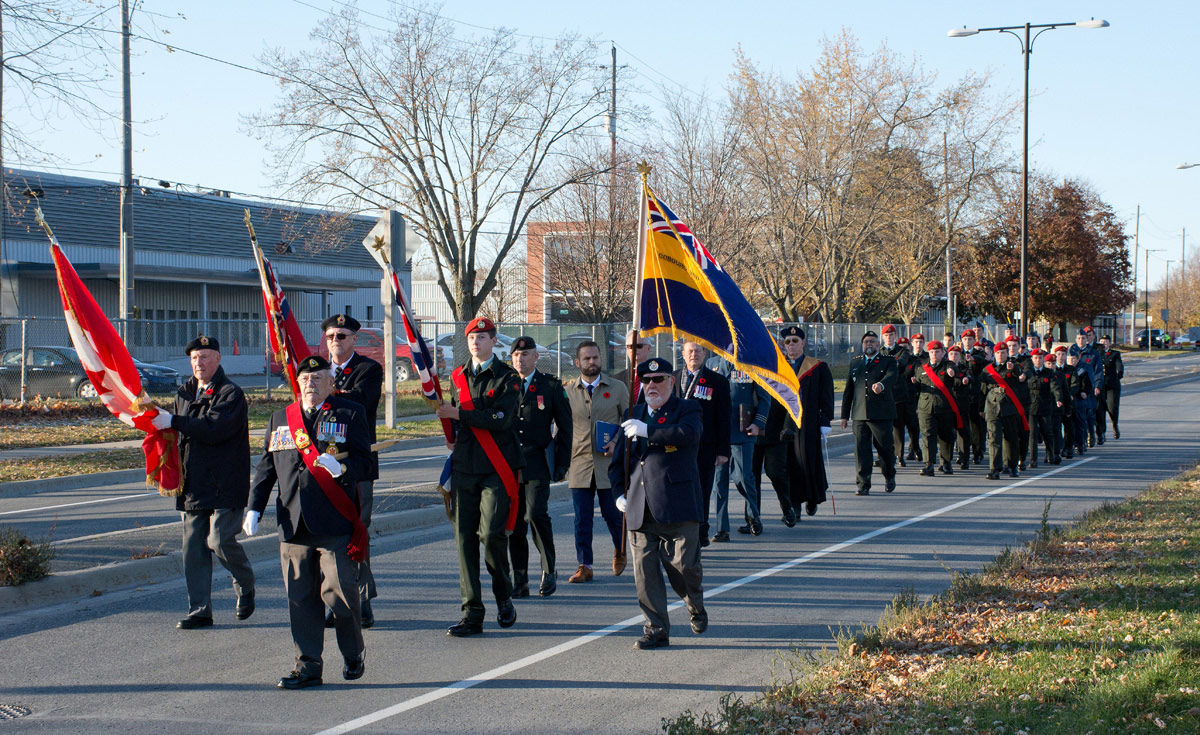 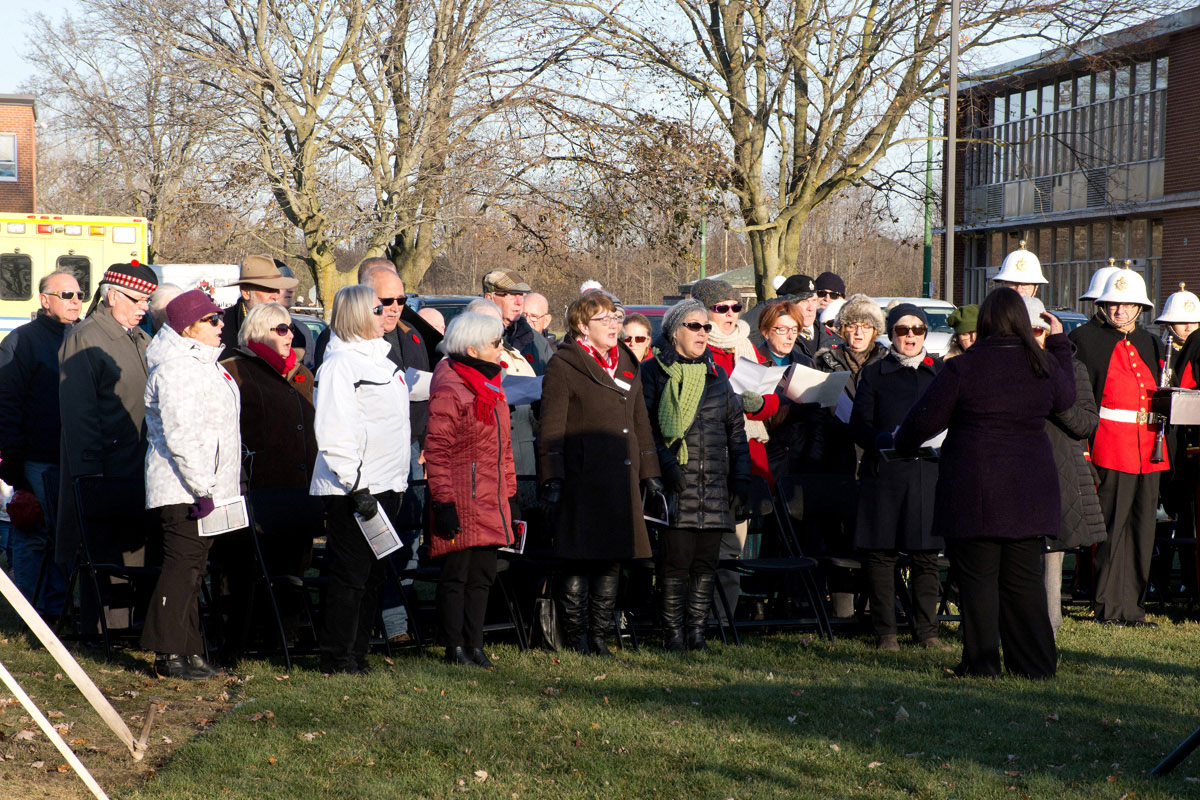 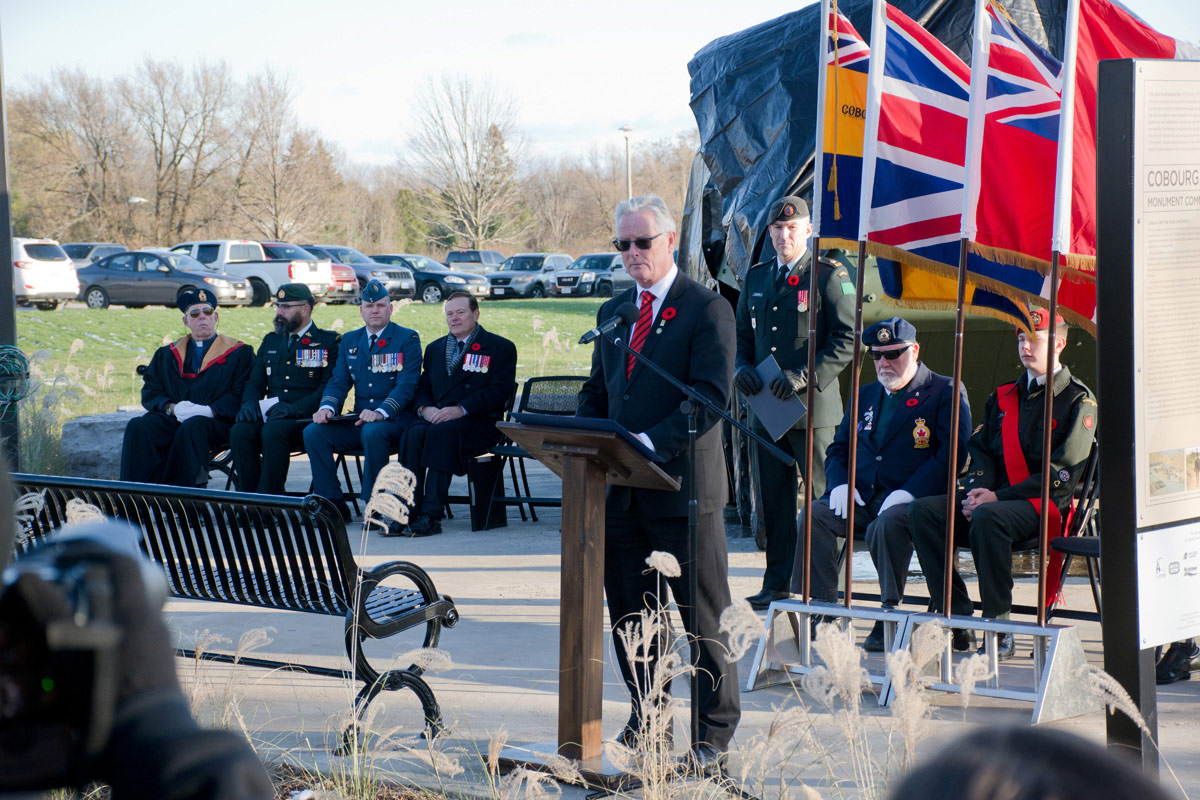 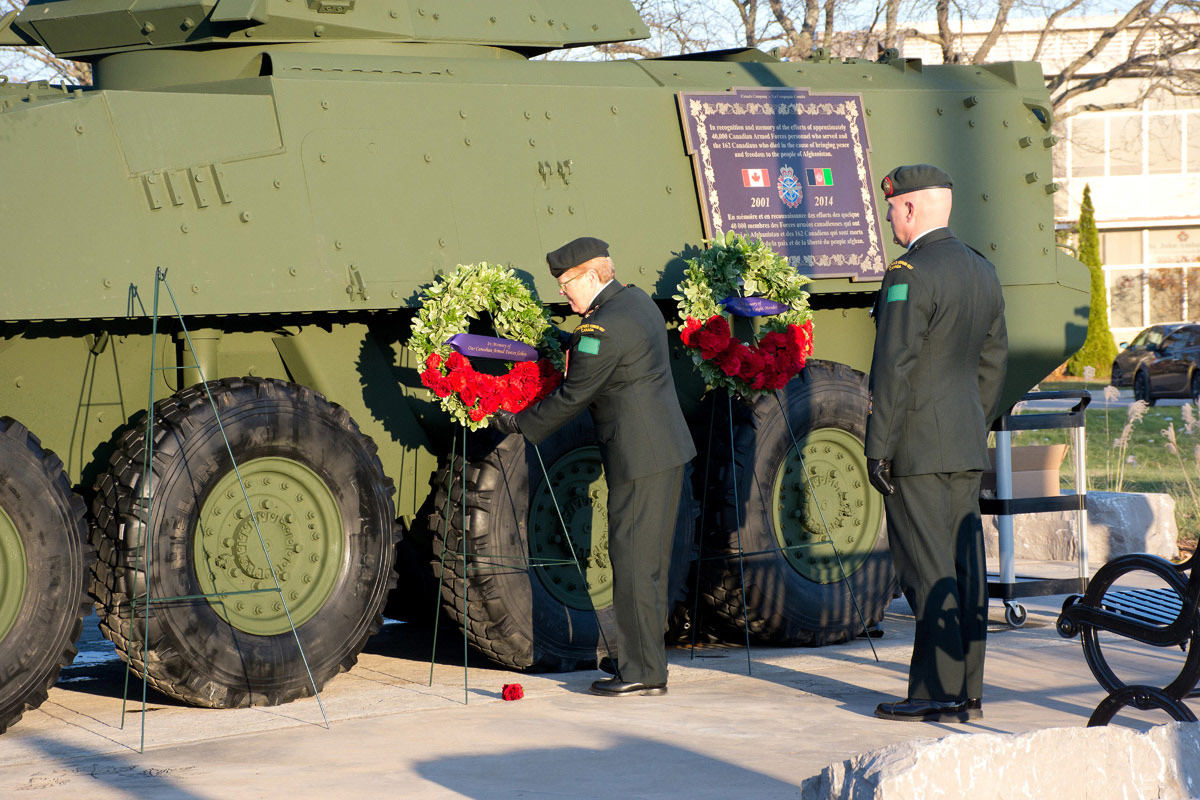 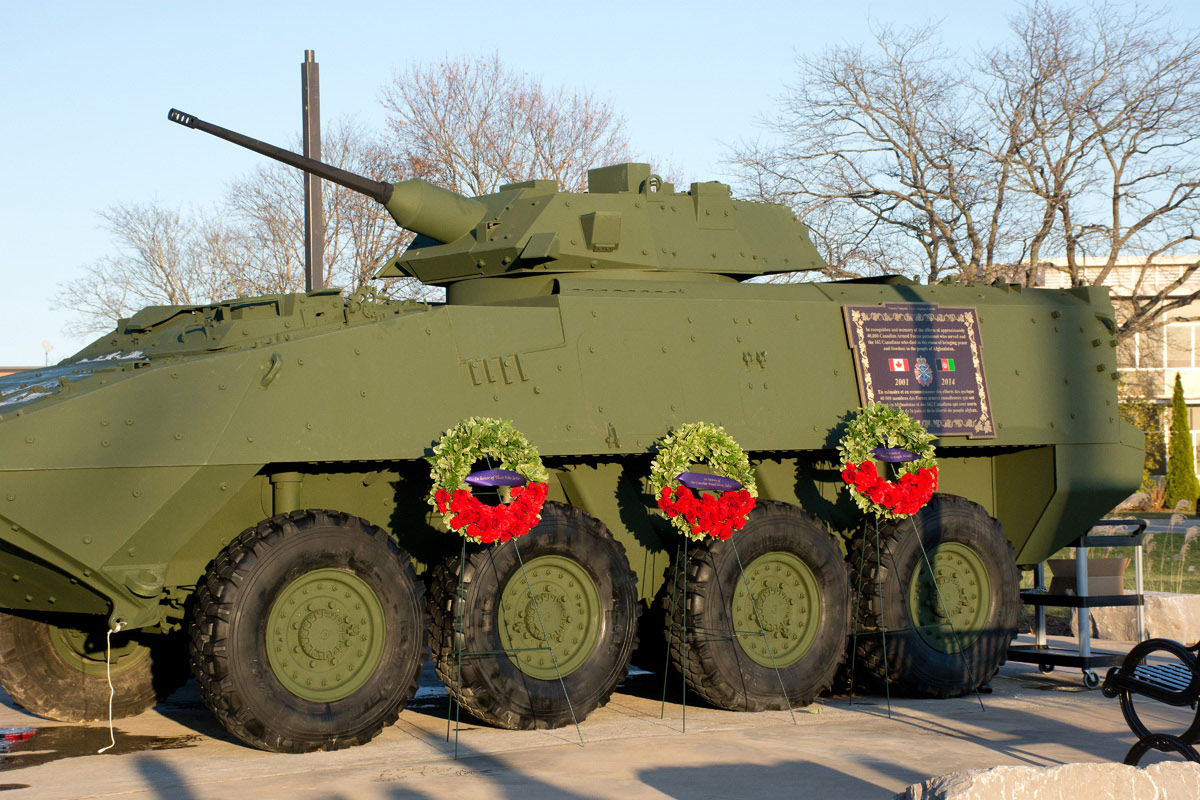 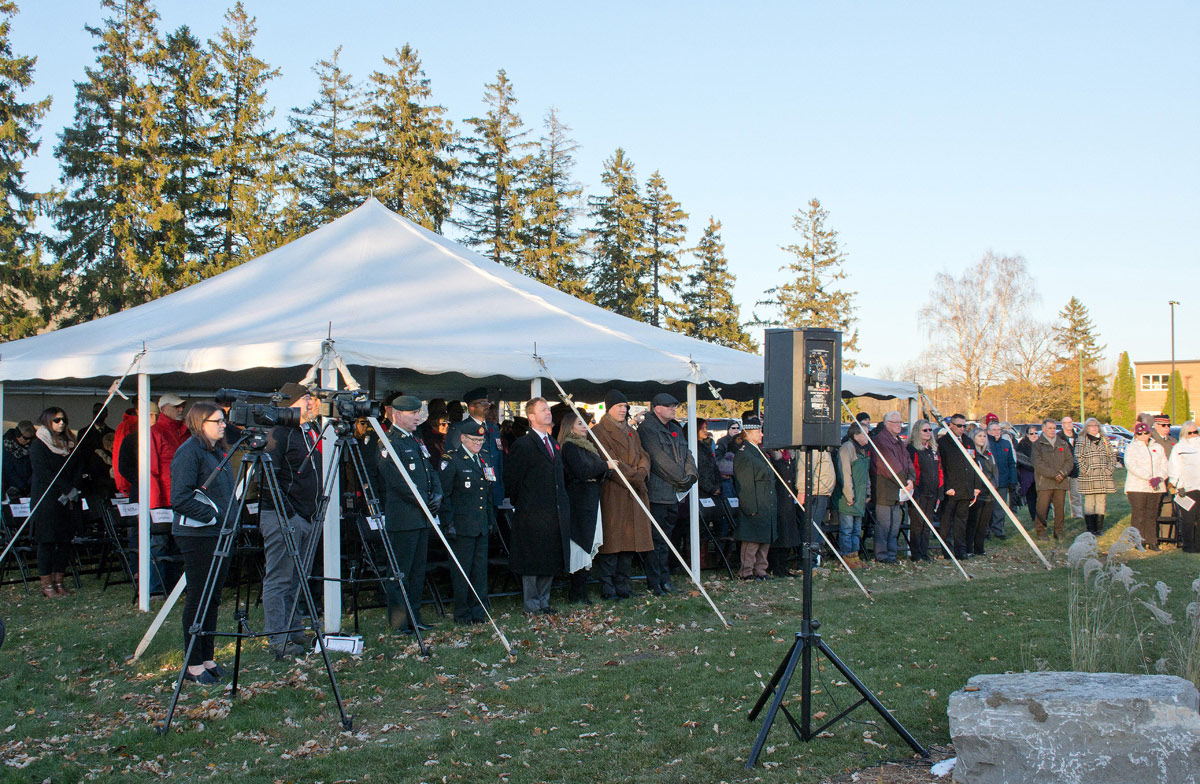 Crowd at Event in Marquee 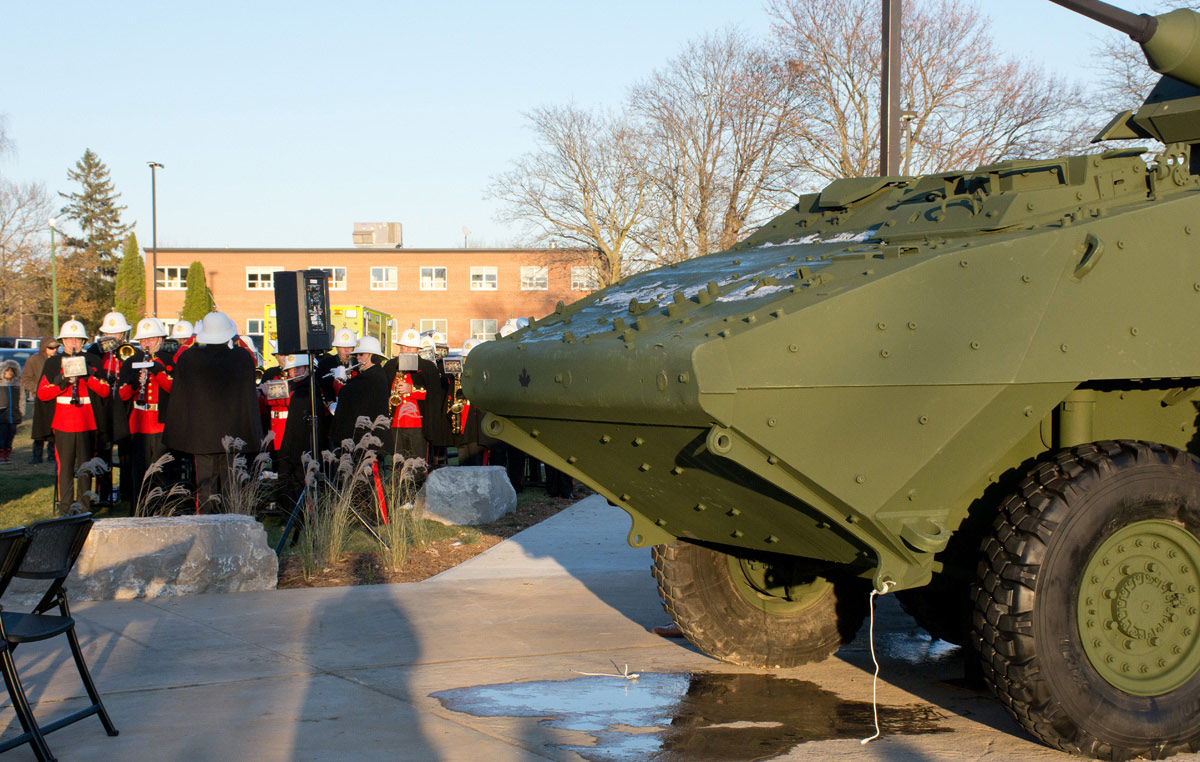 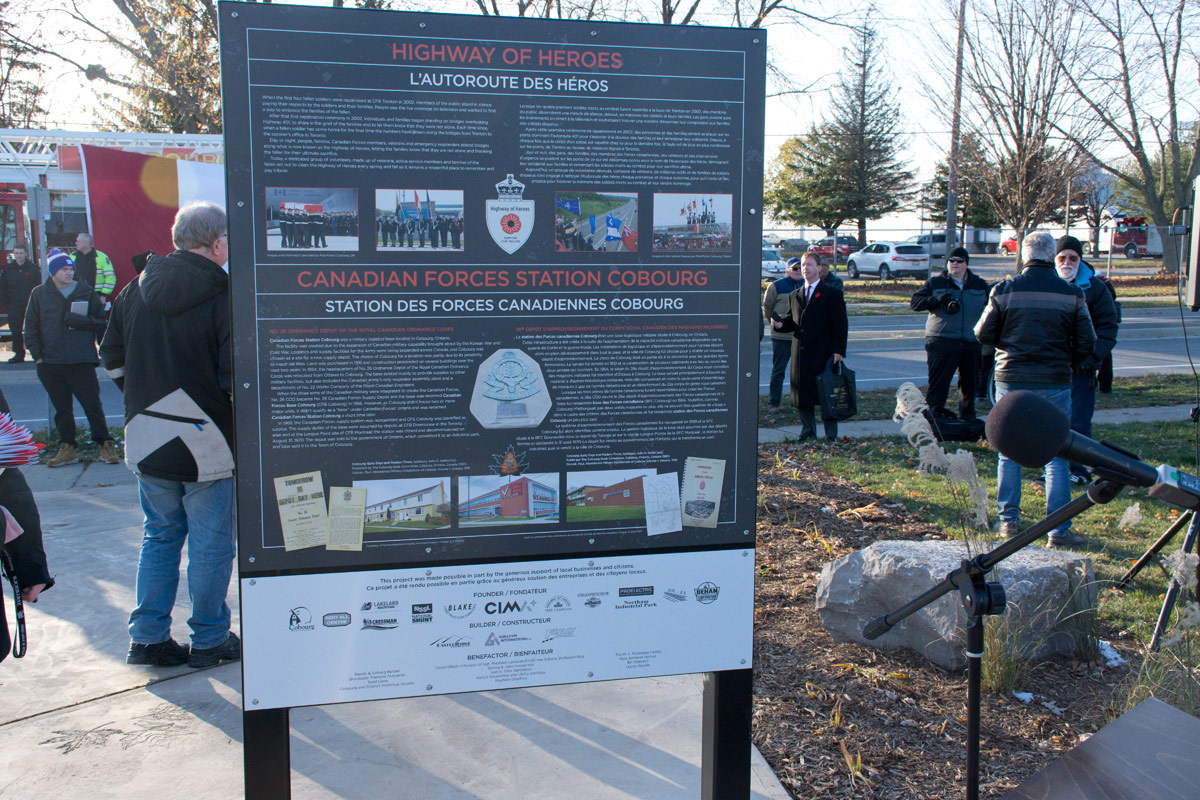 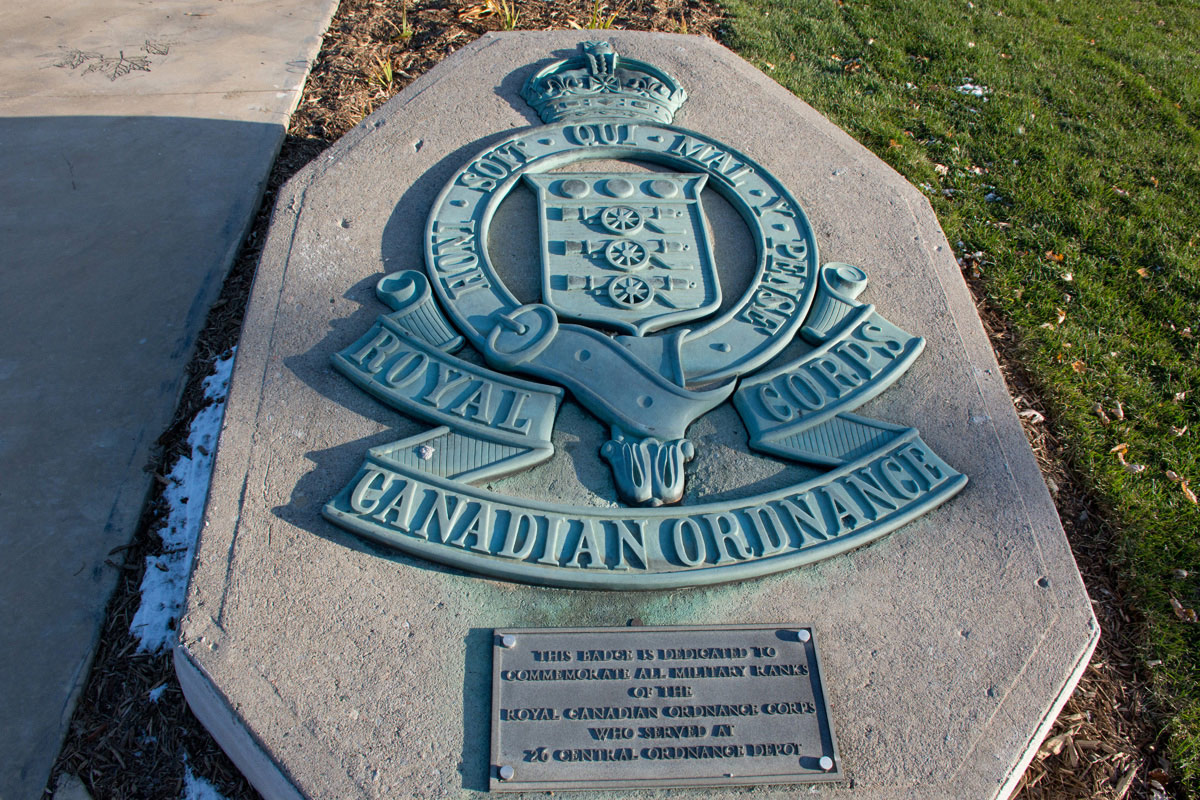 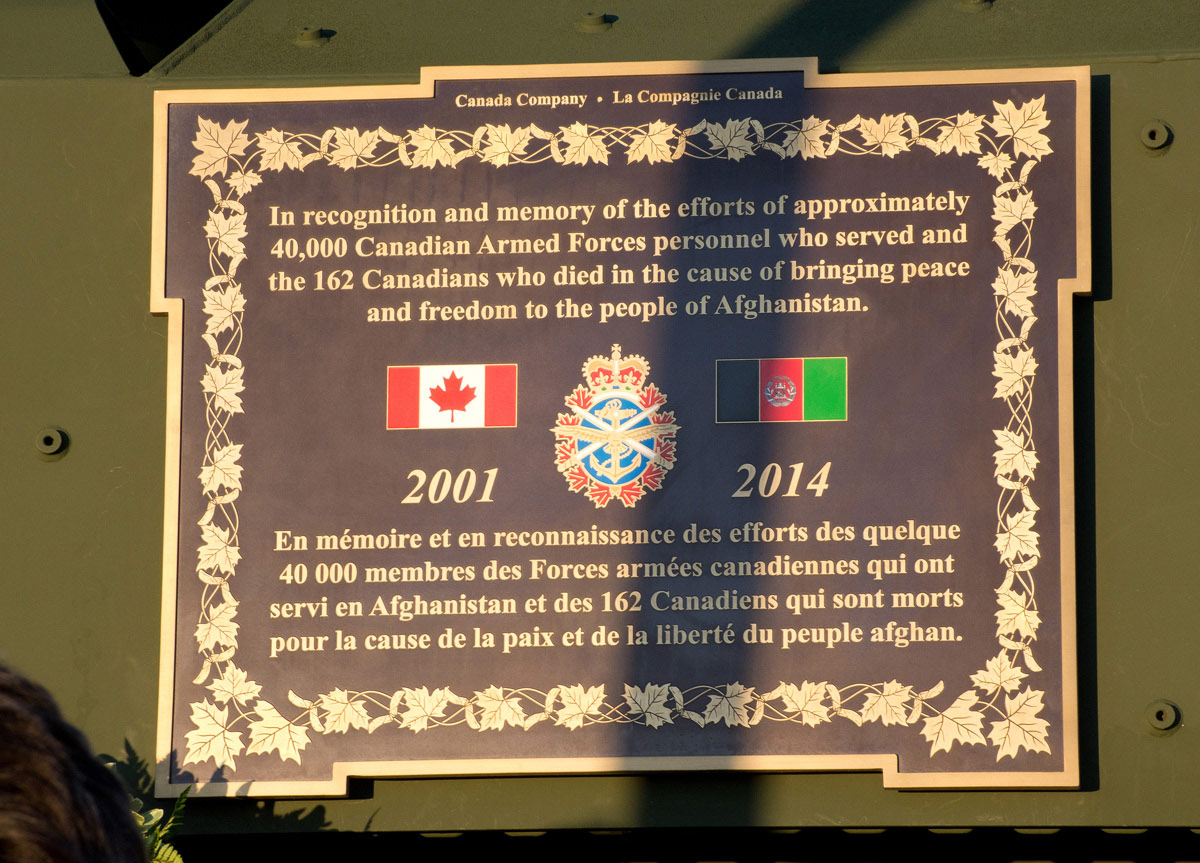 LAV III Memorial- Plaque on side of LAV

Speaking of the Cobourg Remembrance Day, my gratitude and respect to the young honour guard cadets who stood rock steady in the snow and cold throughout the ceremony and to those who stood during the night. Well done!

So proud to be a Canadian! So proud of the Town of Cobourg, Public Works, sponsors and benefactors (will definitely try to support these businesses), bands and attendees. Thank you Canada Company. As an immigrant I am proud of my country and happy to be a resident of a great town.

John, thanks so much for this wonderful post! I hope your cold is getting better?

My wife and I have just returned from the Cobourg Remembrance Day ceremony, which was well attended. Our only suggestion is that someone leading us in song, at the microphone, would have been a welcome addition.

When my wife and I were at the Afghanistan memorial, the other day, we happened to talk to a young fellow that had been a ‘driver’ of one of these LAV III’s in Afghanistan and he made many interesting comments about the vehicles! I feel bad that I did not shake his hand and thank him for his service in our Armed Forces.

I do hope that everyone takes time to go and admire this wonderful display and do read both sides of the ‘information plaque’ beside the vehicle.