At an announcement this morning at the Northumberland Hills Hospital (NHH), MPP David Piccini announced $3.79 Million in new annual funding for the Hospital.  The formula has been revised so that this will continue in future years.  Bob Sanderson, Warden Northumberland County said: “By rectifying an historical inequity in hospital funding formulas, the Province is ensuring that the dedicated staff, physicians and volunteers of NHH have the support they need to continue delivering excellent care to local residents.”  NHH CEO Linda Davis was clearly happy with the change and said that “this announcement is a turning point in the evolution of Northumberland Hills Hospital” and  “We know all too well what our priority needs are. We have – until now – been unable to fully invest in them.”  But now the Hospital can.

David said that the Province is “committed to ending hallway healthcare” and has noted the increased pressure on hospitals, especially mid-sized ones like NHH.  He said that “funding has not matched the budget”.  He commented that it was a real challenge working with the previous funding.

Also at the announcement were Deputy Mayor Suzanne Séguin, MP Philip Lawrence, some County councillors and County staff as well as a good number of supporters and hospital staff.  They all gave David a standing ovation for the announcement.

CEO Linda Davis said that “in 2016, NHH consolidated medical/surgical inpatient care onto the 2B side … but shortly thereafter patient volumes surged and what was envisioned as a manageable 36-bed 2B unit swelled dramatically to a 52-bed unit. This has not been ideal for patients, their families or NHH staff, but with our previous funding, we were unable to re-open 2A. Today’s announcement will allow us to do this, and return our 2B and 2A medical/surgical units to appropriate sizes better able to care for the high volumes of patients that we are now seeing while still – and this is key – maintaining a balanced budget. It will also permit us to plan for much needed improvements in our ED, mental health and ambulatory care programs, all of which will contribute to easing hallway healthcare for our community.”

Penny Baird (RN) and Dr. Andrew Stratford also spoke; Penny described the difficult conditions for nurses that would now be eased and Dr. Stratford was highly appreciative of the nursing staff and thanked Piccini for the increased funding since up till now “it has felt like re-arranging deck-chairs” but now this has “given us hope again”.

Bob Sanderson remarked to David that “you now know how to get a standing ovation”.  NHH Board chair Pam Went said the “NHH is an efficient hospital, and it simply cannot meet today’s patient needs or the needs of tomorrow without net new investment”.  CEO Linda Davis once again thanked Piccini and Christine Elliott, Minister of Health and said “You have listened”.

In June of this year, there was an announcement of an additional $1M in funding; I have confirmed that the $3.79M is additional to the $1M.  $4.79M is a big addition to the annual operating budget of $70M. 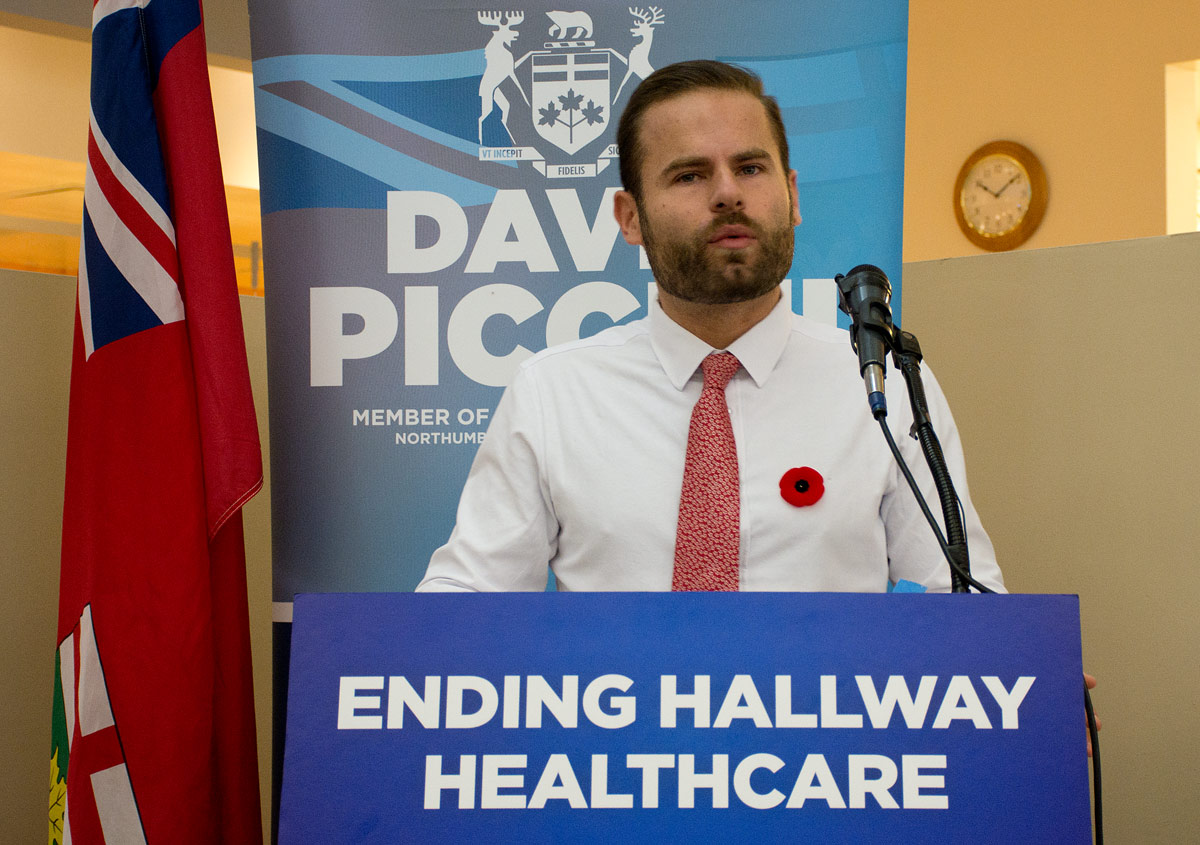 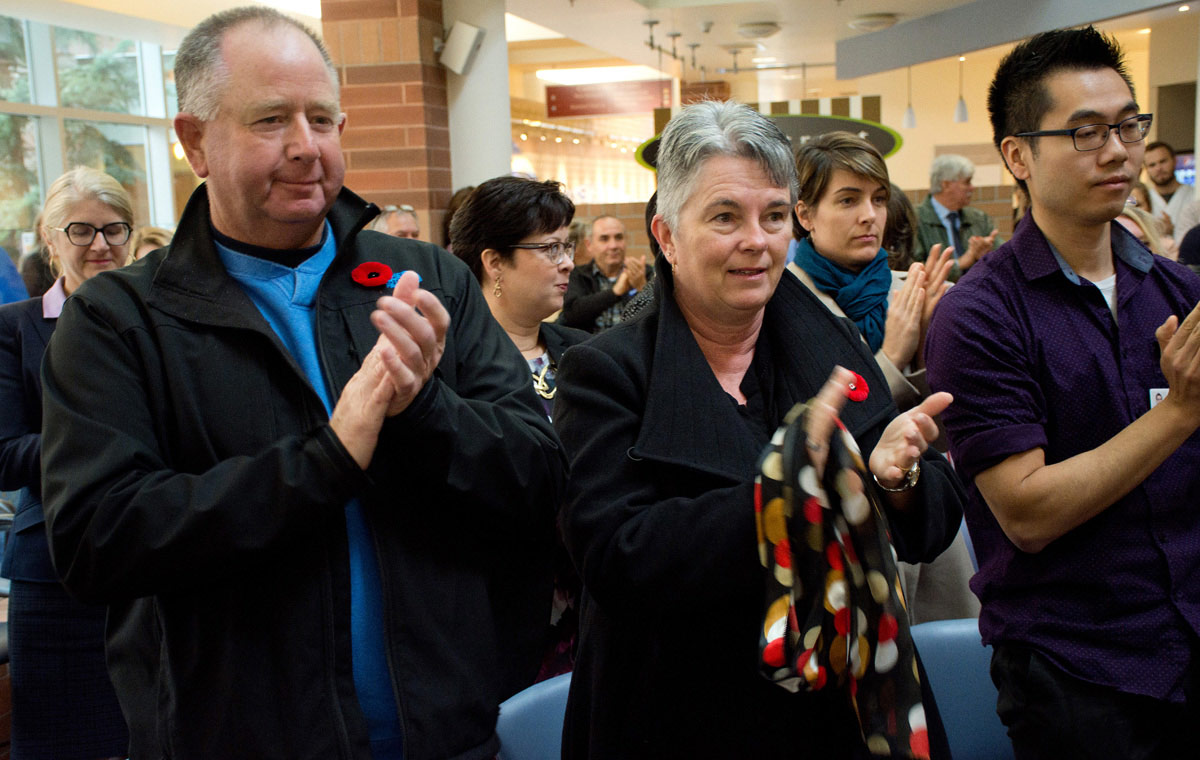 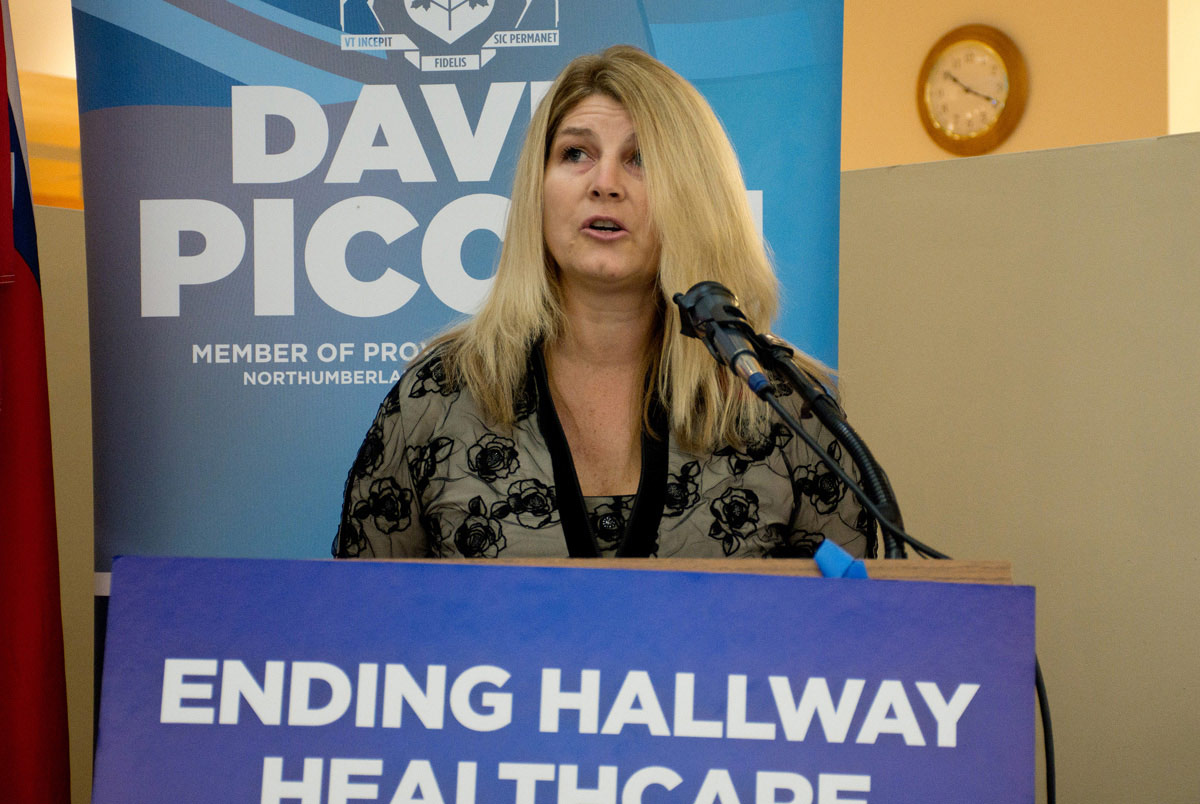 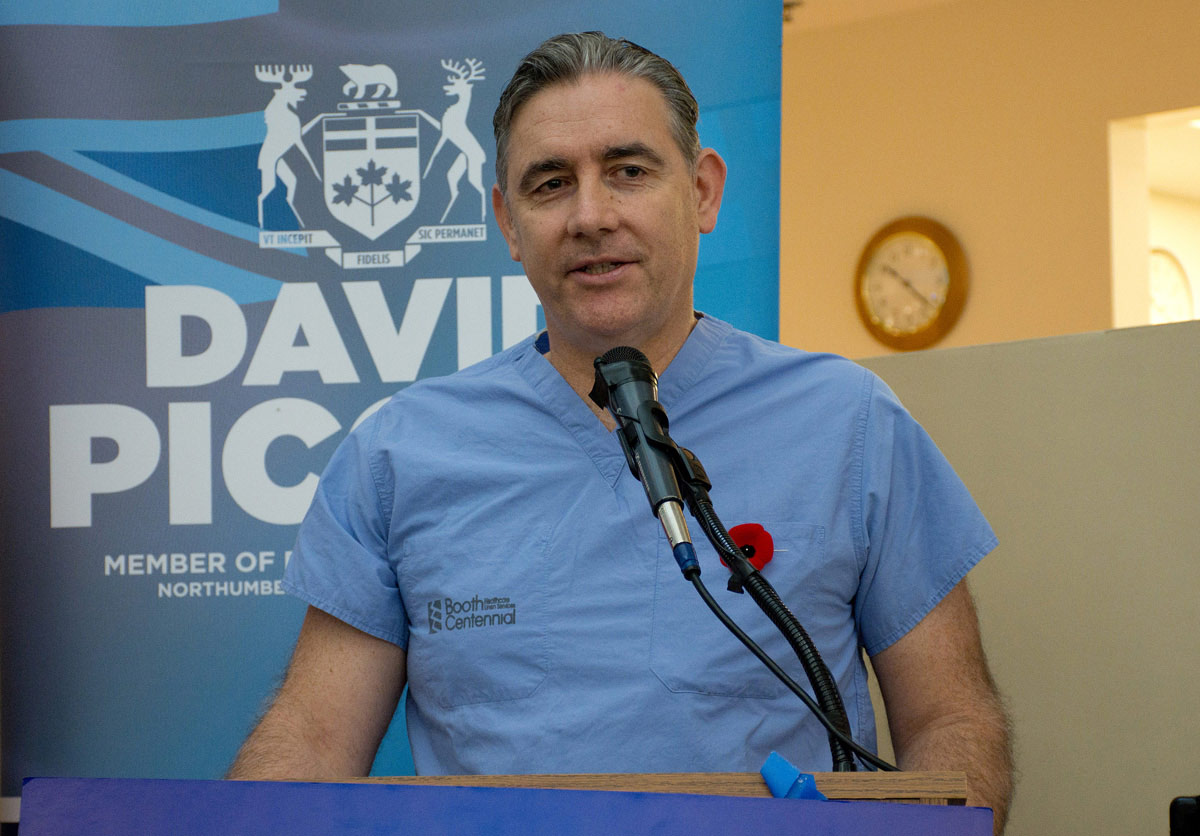 I am getting tired of all these politicians ( provincially and federally ) walking out to a Podium with people taking time off work to stand behind them , to say say how great their government is by giving back our money us 🙄
The PST should be raised by a 1 % to give the health care enough money to work with

Personally, I believe we should be thankful for the healthcare system we currently have in Ontario. Since I was first diagnosed with MG back in 1999, I have witnessed first hand the good, the bad and the challenges which have confronted the healthcare system across our country. Complaints of hallway medicine, long delays in scheduling for a CT, MRI or to see a specialist were commonplace regardless of where one lives in this country. Will we ever have perfect? Probably not. But I can say I have experienced a considerable improvement in recent times in more ways than one. I guess it depends on how one looks at things and personal experience. I had a heart attack in January and more recently was an inpatient at West Park in Toronto for a six week respiratory rehabilitation program. My personal experience over the past year at NHH, Oshawa General, Centennial Hospital and West Park has been nothing short of outstanding. My family doctor and specialists are excellent and are to be commended for all they do. The nursing staff I have encountered at each facility are compassionate and committed to improving the lives of patients. As I mentioned above, I recently was an inpatient at West Park Rehabilitation Centre in Toronto. I never knew the place existed and was completely blown away by what they do and the professionalism of the doctors, nursing staff, therapists and instructors. I was amazed at the level of organization that it takes to run a complex organization which our hospitals are and was overwhelmed by the new technologies that are coming online. Without being partisan, I wish to thank our MPP David Picinni for his part in securing the additional funding and ending the inequity that mid-sized hospitals faced in the past. In my humble… Read more »

So let’s get this clear, $4.79million today composed of $3.79 in an addition to this year’s budget and a 1.5% increase to the base budget for future years. The quote is taken from the MPP’s facebook post:

“Proud to announce $3.79 million in funding to NHH to address this historical shortfall and another 1.5 percent increase in base funding!”

In real terms then, and please correct me if I am wrong, this means that the NHH gets a gift and a guaranteed increase in the base budget. So when the money is spent this year on the NHH’s plans to correct deficit moves, i.e. deconsolidate 2A and 2B, what happens next year? Will the 1.5% increase be based on this year’s bottom line or has the Province accepted that the next year’s budget’s bottom line will be $3.79 million higher?

Five comments have been deleted since they were way off topic – there is no apparent connection between climate change and funding for Hospitals. Use the post on Climate Change demonstration if you want to discuss that. The About>Comments page warns that off-topic comments will be deleted.

That is great news , indeed. The NHH has really grown in the last 15 yrs, and certainly that applies to the much wider range of local medical and surgery services. Now with a better operating budget, the continuing Foundation and Auxiliary capital funding , maybe it’s timely to suggest that a priority be given to having a canopy (shelter over the area where In-Patients are exited.)
For years, i have noticed patients, along with nurses, volunteers and family , having to help Patients into their transportation vehicles in rather very inclement weather! I know ‘hallway” medicine has to be a priority, but in the meantime, Patients should not have to go through such weather conditions when leaving the NHH. I don’t know of any hospital where this is the case and wonder why such an oversight happened during the original design.
Recently, when picking up a family member on a very heavy rainy day, I noticed a bus loading a wheel chair person onto the bus’s ramp; it was terrible for both the patient and the driver. The driver and I chatted briefly about the lack of “cover” so maybe now is a good time to have this improvement placed on the NNH list of priorities.

A laudable first step.
Many, myself included, have experienced the indignities and even horrors of ‘hallway medicine’.
But!
According to very recent report by the Financial Accountability Office at Queen’s Park the following dismal picture emerges:
The solution to hospital overcrowding are is more long term care beds.
The FAO report found that even if Ford delivers the 15,000 long-term care beds his government has claimed they MIGHT, the wait list will keep ballooning.
Four times that number of beds are needed — 55,000 more — just to maintain the awful status quo. What’s more, the hallway medicine crisis that has hospitals operating at more than 100 per cent capacity on a regular basis will go from bad to worse.
Ford is planning to slash long-term care funding by $34 million by next year, when the FAO report shows the Conservatives’ spending on long-term care will need to increase by at least $1 billion.
https://www.fao-on.org/en/Blog/Publications/ontario-long-term-care-program

Chuckles!
Always personal attacks from you.
How about dealing with the argument/facts presented?
Too hard?

Fact 1. In answer to a query, Walter Luedtke answered “affirmative”.
Fact 2. The query asked if {Walter Luedtke] believed in the assertion made by a teenager that we are at the “beginning of a mass extinction.
Fact 3. Walter Luedtke asserts that “long-term care will need to increase by at least $1 billion.”
Query: Why bother?

There, has that been depersonalized enough for your sensibilities?

“Always personal attacks from you.”

Always? Really? Always? I can go back plenty of times to copy and paste replies over the years that did not hurt your feelings; even defended you at rare times. The assertion that I “always” make personal attacks against you is untrue and serves only to personally malign me. If you are going to continue to malign me in such a hyperbolic manner, then best that we discontinue dialogue between us. HOORAY!!!! in the background.

Hahahaha!
Still not able to engage with the facts on ‘hallway health care’ as presented by the Financial Accountability folks.
But what do they know anyway?
“Ontario’s Financial Accountability Office (FAO) provides the Legislative Assembly of Ontario with independent analysis on the state of the Province’s finances and trends in the provincial economy, and on bills and other proposals to support the Assembly’s performance of its constitutional responsibility.”
Contra stultitiam dei impotentes – St.Thomas Aquinas, sort of.

Seems that Cobourg folks are not interested in discussing an alarming report by a non-partisan government agency on ‘hallway healthcare’ and long-term care facilities.
Easier to down-vote the facts and shoot the messenger, even in a town with a way above cohort of Seniors.

1. A Public (virtual) meeting has been scheduled for Feb 7 to talk about changes to Parking fees – details here.

2. The Town of Cobourg has hired a new Director of Community Services, Brian Geerts.  See the Press Release here. He starts Feb 7.