Well the optimists (like me) were wrong – the water level of Lake Ontario at Cobourg has now set a new record and according to the GRCA, it has not finished rising yet (see GRCA Flood warning below).  The graph below shows the peak level from each day and on 29 May the level was 8.3 cm above the record set in 2017 (that’s 3.25 inches).  On May 30, the Marina fuel dock is still covered in water although thanks to some work by the Marina, it’s still operational.  In fact Julie at the Marina said that other than supply of electricity to boats, Cobourg’s Marina is fully open for business – this despite the fact that many other Marinas have closed.  The Beach is also flooded and virtually unusable.  Dredging operations have now resumed after a mechanical problem with the dredge so that also makes a mess of the beach.

Although there are pumps working in the driveway of the Condos on Third Street, there is no flooding in their basement parking – it’s just a precautionary measure due to high ground water levels.

A flood warning is still in effect but apart from the GRCA flood warning, the only official data on water levels is from Fisheries and Oceans Canada at the link below. The official reason for the high levels continues to be the need to protect downstream from flooding due to water into the St. Lawrence from the Ottawa river. It seems that flooding along the shores of Lake Ontario is the lesser of two evils. With “100 year floods” happening two years apart, I haven’t heard any attempt to forecast what will happen next year. 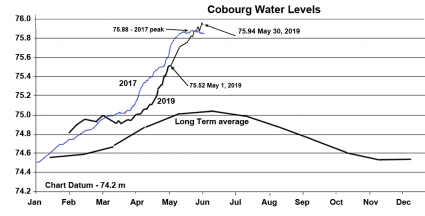 Note that the peak water level on May 30 was 90 cm above the long term average (mean) level. That’s almost 3 feet!  [Following note added 31 May]. Note also that the graph for 2017 is the mean level whereas the 2019 numbers are peak which are affected by wind and will be higher than the mean.  Other reports on water level are using mean numbers.  But the pictures tell the story….

Below are photos of the Marina and the beach on May 30. Quite foggy 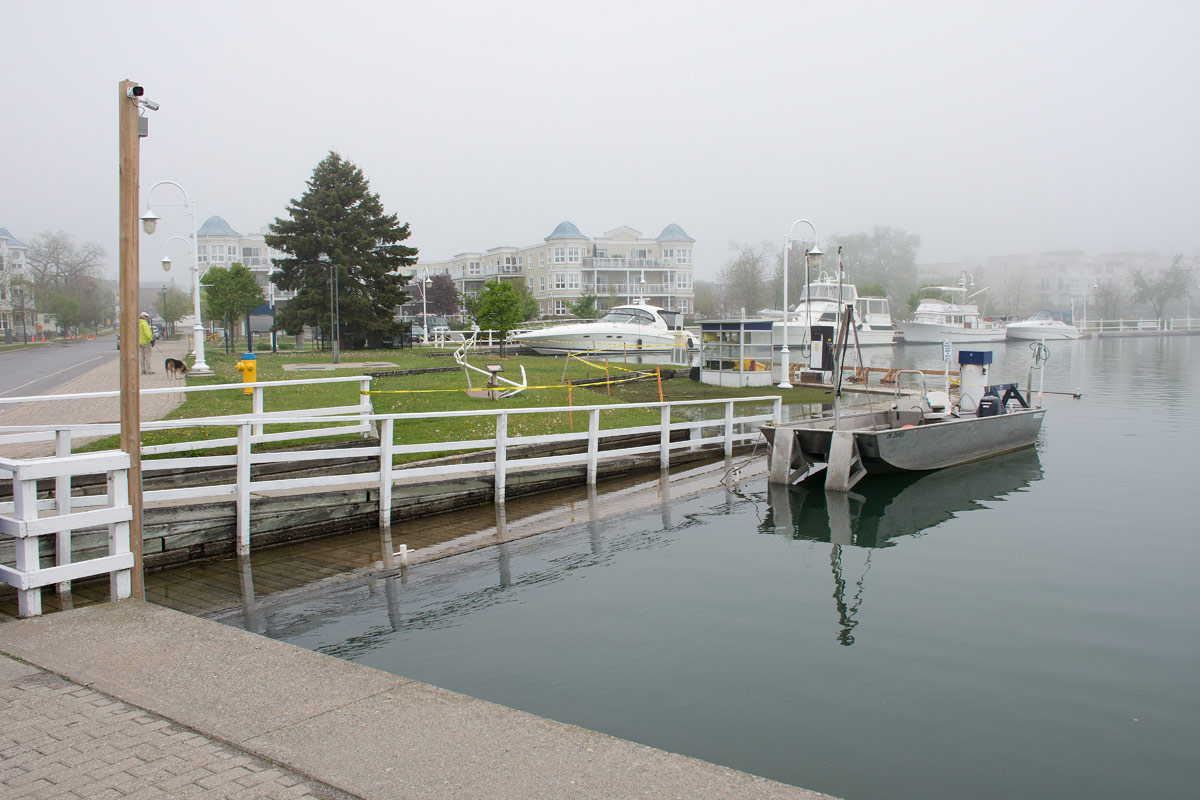 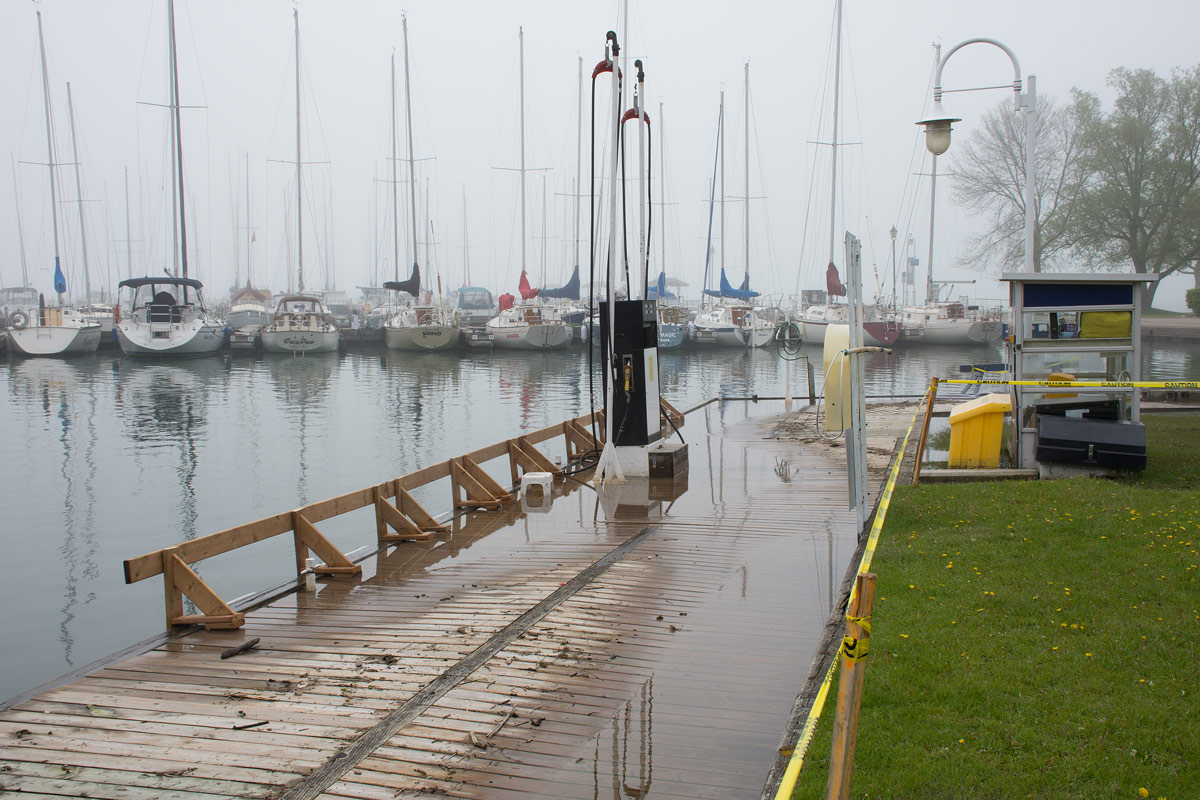 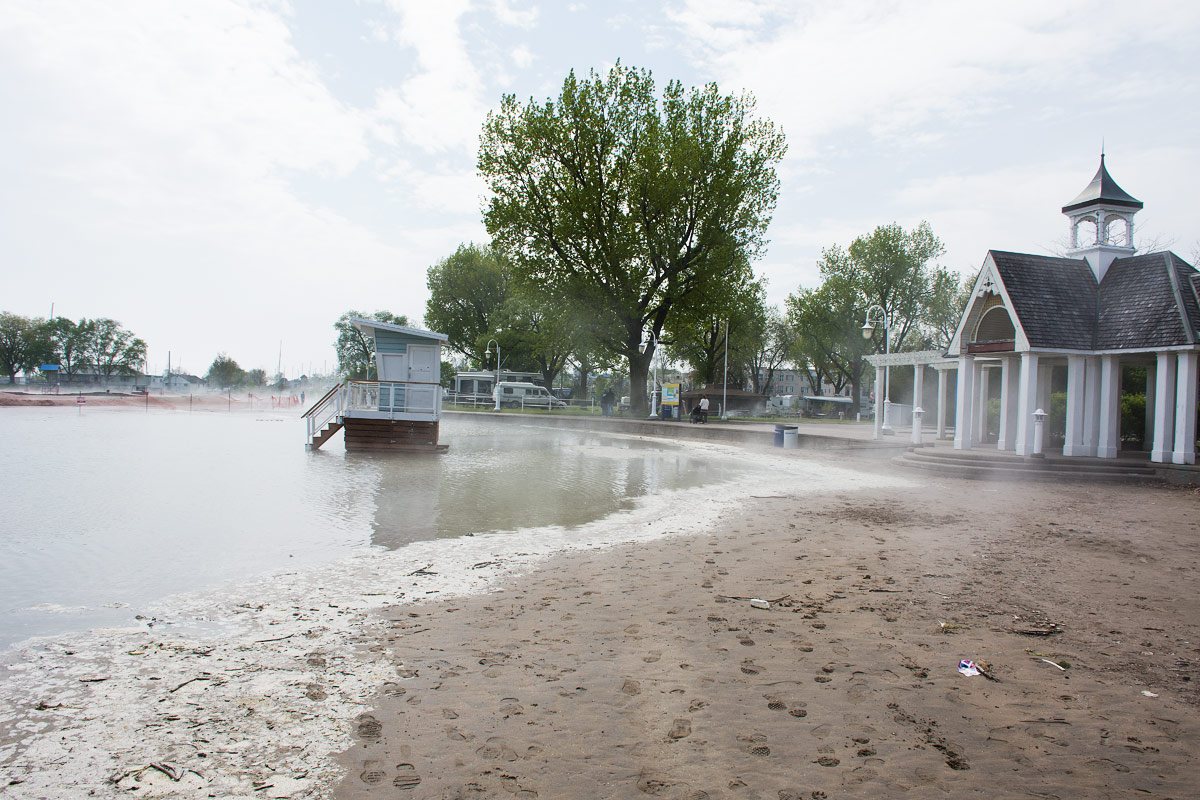 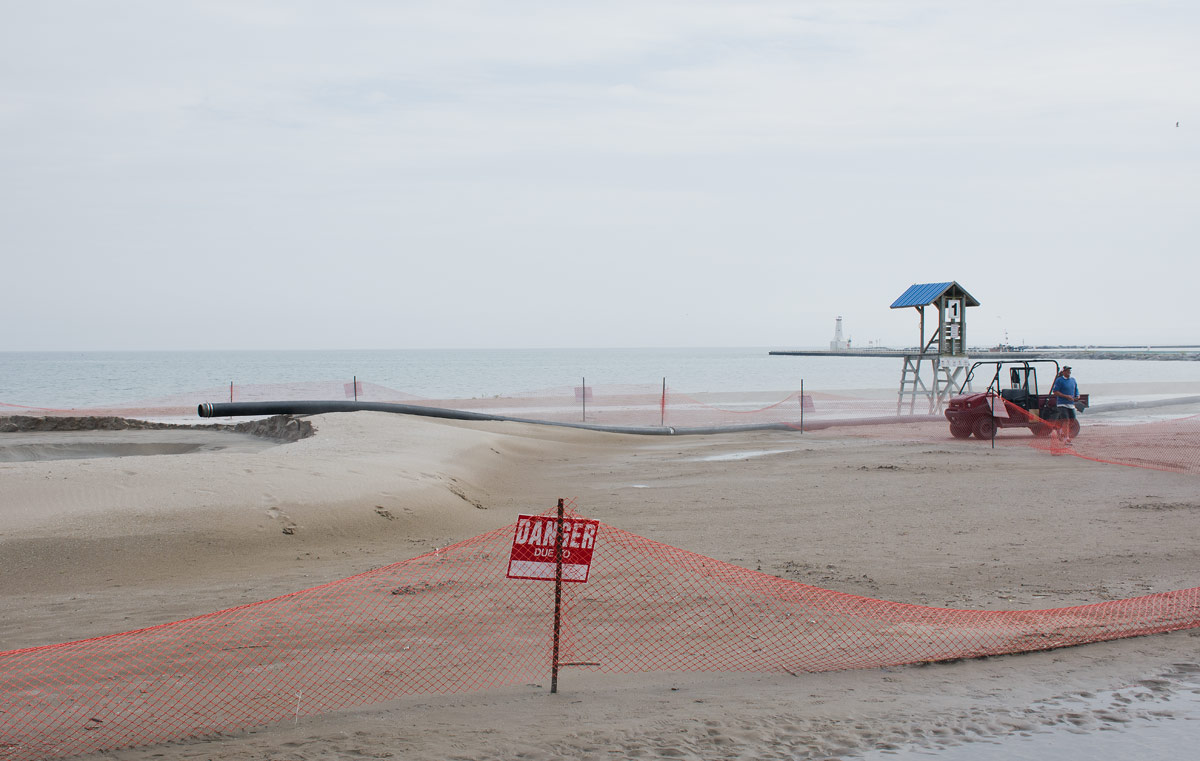 another take on this could be that folks who paid a premium for waterfront property are sure getting their money’s worth, PLUS a premium.

Go ahead manfred s, mock those who bought property in good faith with the blessings of local governments.
You sound like that jerk Stockwell Day…
“Hey who knows, maybe Al Gore is right… Maybe all my constituents living high up on the West Bench, or Lakeview Heights, or the hills of Logan Lake will soon be sitting on lakeside property as one of the many benefits of global warming.”
Stockwell Day

plleeezzz Frenchy…give me a break! If I buy property next to a dump, or a pig farm, or a wrecker’s yard, a major thoroughfare, or a dynamic body of water, or any other compromised location, it’s my responsibility to deal with, at my expense, any unpleasant but predictable issues that are very likely to arise at some time. As for “.. with the blessings of local governments”, you can’t have it both ways, complain about restrictions due to flood plains and then expect a bailout when you defy the logic of avoiding flood risk. Implying ‘victimhood’ in such cases is dishonest. I have a feeling though, you’re only going through the motions on this for the sake of a weak slam against “local governments”.

You’re right again manfred s.
But, I wasn’t complaining about restrictions, nor was I expecting a bailout. The intended weak “slam” wasn’t against local governments, it was against stupid comments like the one from Stockwell Day, and by extension….
I guess I should just have given you a thumbs up, agreed with you and said ha-ha, the jokes on you waterfront property owners.

my only premise was “freedom of choice” and the outcomes and consequences that follow. The implication of victimhood sparked my comment and if that came up in any face to face conversation I’d feel obliged to respond with the same message, as long as it’s truthful, despite the discomfort. Having said all of that, I have empathy for the anguish and pain being suffered by those property owners, in part because, likely in most cases, their troubles are not of their own doing, even though they may have been foreseeable to some degree.
…besides that, Frenchy, it’s not about being right, it’s about being aware of our circumstances and making appropriate choices, which is something you yourself also espouse frequently.

Would you say that to a waterfront property owner’s face?
I’m guessing (and hoping) that your common sense and good manners would hold you back.

One would think that the substantial “pond” that develops every Winter-Spring on the south lawn of the King George Inn property would be detrimental ground water for the condos on Third Street.

As a retired Electrician, I feel the town is going to have to ‘bite the bullet’ and relocate/lift up all the power junction boxes that feed the docks. It may cost some money, but it will be money well spent! I am sure boaters can’t be charged for electricity, when it’s not there?
Who can predict how many more years this ‘high water problem’ will continue?
Does anyone have ‘working drawings’, showing how to build an ARK?… 🙂

I also believe that this increased water level event is not leaving Ontario and Quebec any time soon. And I support a tax which when collected would be invested in climate change research or mitigating things like flood damage. But I have not heard why our Federal government has a climate change plan, collects a carbon tax and then gleefully, with trumpets blaring pays it all back to taxpayers on their annual T1 returns. Sounds like a single purpose Liberal vote getting tactic to me. On my back of the envelope calculation the carbon tax refunds of $6 billion+ is a waste of Federal money and should be spent on mitigating or solving the climate change problems.

From the late 1950s until 2017 we had a very effective water level management plan for Lake Ontario. The new “IJC Plan 2014” favours high water levels and ignores damage from flooding. Why not reinstate the lake level controls that served us well for over 50 years?

You might find the information at http://unitedshorelineontario.ca/ of interest.

Earlier this year, the Province announced that funding to Conservation Authorities for flood management programs would be cut in half.
Not content to just slash their funding, the Ford government is also proposing to narrow the scope of Conservation Authorities and reduce their role in watershed management.
But Provincial, municipal and industry leaders met behind closed doors in Ottawa to discuss the flooding that hit a number of communities bordering the Ottawa River in and around the national capital this spring.
The local conservation authority was not invited.
In contrast across the Lake from us, Gov. Andrew Cuomo announced the creation of a new commission to look for ways to harden the Lake Ontario shoreline and better protect communities against potential future flooding.
“Intelligence and common sense dictate that this is the new normal and we should expect continued high water levels for Lake Ontario,” Cuomo said.
“We should not be surprised if in two years we find ourselves in the same position and once you accept that premise, it’s a fool’s errand to rebuild to the same standard.” Rochester Democrat & Chronicle

So the Ford Goverment has been in power since last November and the flooding is his fault, then u site NY’s Gov Coumo promises as someone we should follow, think we have enough commissions and study groups ( Conservative and Liberal ) already in place if they would just do the job they were appointed for.
I’m sure if Doug Ford walked on water u would complain that he can’t swim, anyway carry on, enjoy your day there is always tomorrow and u can complain about that

“I’m sure if Doug Ford walked on water u would complain that he can’t swim,”

I wouldn’t say that but if he fell in and never came back up I might be happy!!

Ford has been in power since last June. November = United States of Freedom elections. And aside from stating actual facts, the original post didn’t extend any blame for anything. The characterization “not content…” is a bit provocative, but within civil discourse. Reading is hard if you have a conclusion in mind before you start. Also, spelling matters – site is a place, cite is to refer to something as in a citation. Spell check doesn’t pick that up.

PS
I voted for Ford, but that doesn’t mean everything he does is informed, helpful, and good policy, merely that on balance, the approach outlined by his platform better fit the needs of our current times. He can still make mistakes, screw up, or be totally wrong-headed.

“and farther below, Lake Ontario, takes in what Lake Erie can send her”
Gordon Lightfoot