Chris Barker has a long history with the Royal Canadian Sea Cadets “Skeena” and with the ship that gave the cadets their name – HMCS Skeena.   The Canadian Navy destroyer was lost in a storm off Iceland during the Second World War (1944) with the loss of 15 crew members and 2019 is the 75th anniversary of this event. Chris and the other volunteers working with the cadets want to take 30 cadets to Iceland this Fall to participate in events that remember these Canadians who gave their lives.  Their fundraising activities included a “Military Tattoo” at the Baltimore Arena on Saturday, May 4.  A first of its kind in Northumberland (as far as I know), local Cadets and bands entertained more than 210 spectators with drills, pipe band music and even Highland Dancing.

Over the last several years, Chris has formed a relationship with the people in Iceland who were involved and has put together a narrative of the Skeena and helped construct a memorial in Iceland.

On the 60th anniversary in 2004, cadets and officers from the Sea Cadets unit visited the graves and on the 75th anniversary it is planned to do so again.  It is hoped that “this will have a positive effect on the cadets, installing a sense of gratitude to the veterans who have served our country.”

The Tattoo was well organized and showed the skills that cadets have learned as well as providing entertainment from the Port Hope and Cobourg Legions’ Pipes and Drums bands.  It started with an opening ceremony, then came two performances by small indigenous groups. These were followed by drills and bands playing popular selections. There were 160 participants, including some Cadets from Campbellford, with all ages represented. For those with navy affiliation, boys and girls aged from 9 to 12 are in “Navy Leagues” and those 13 to 18 are in “Sea Cadets”.

The event was supported by Sponsors: Lakeridge Chrysler Dodge Jeep, Northumberland 89.7, Northumberland News and Hamilton Township who donated the Baltimore Arena time for the event. There was also a silent auction with some good bargains to be had.

See links below for more about Cadets and the HMCS Skeena story.

Below are some photos taken at the event.
As usual, click any photo to enlarge and access slide-show controls. 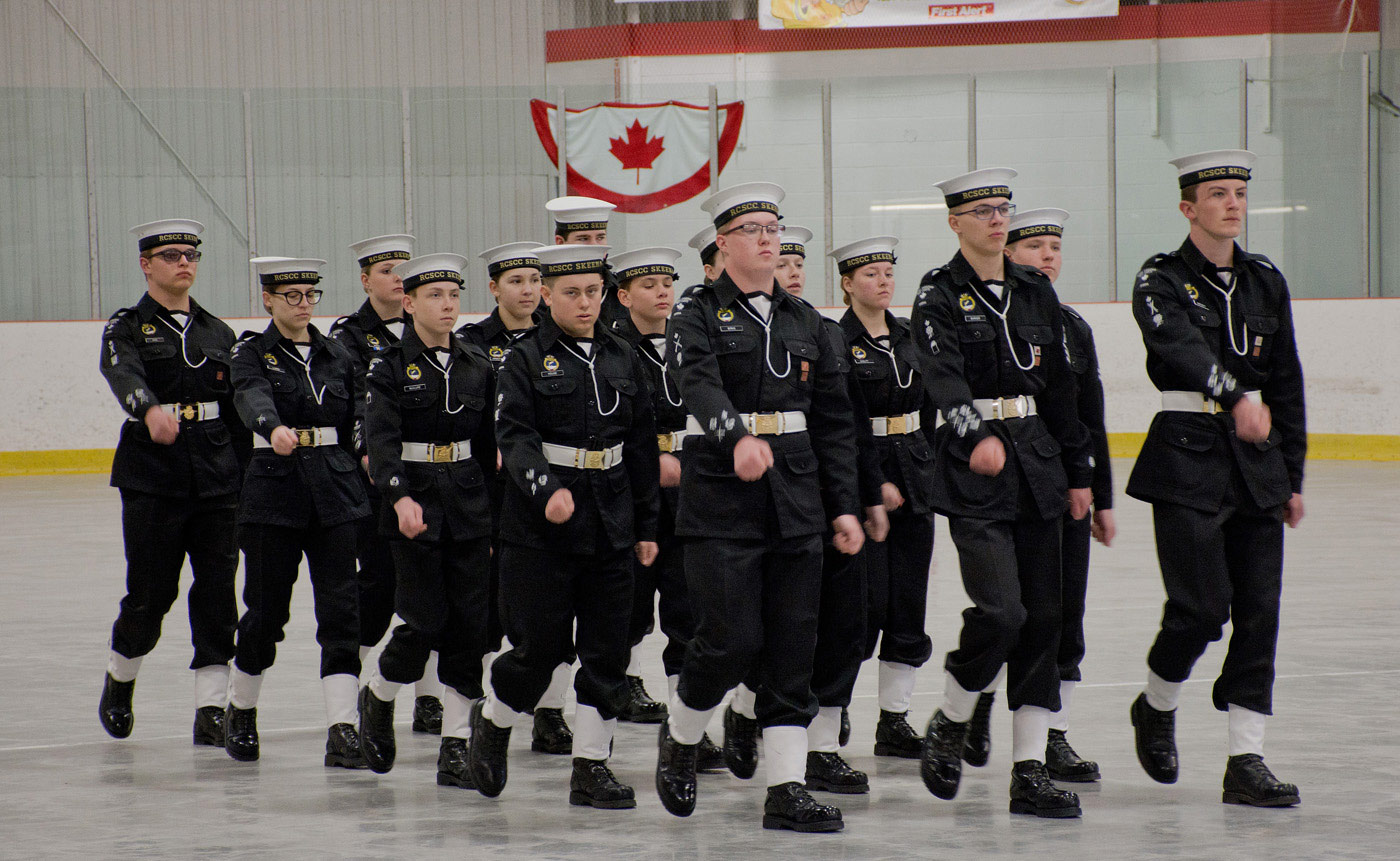 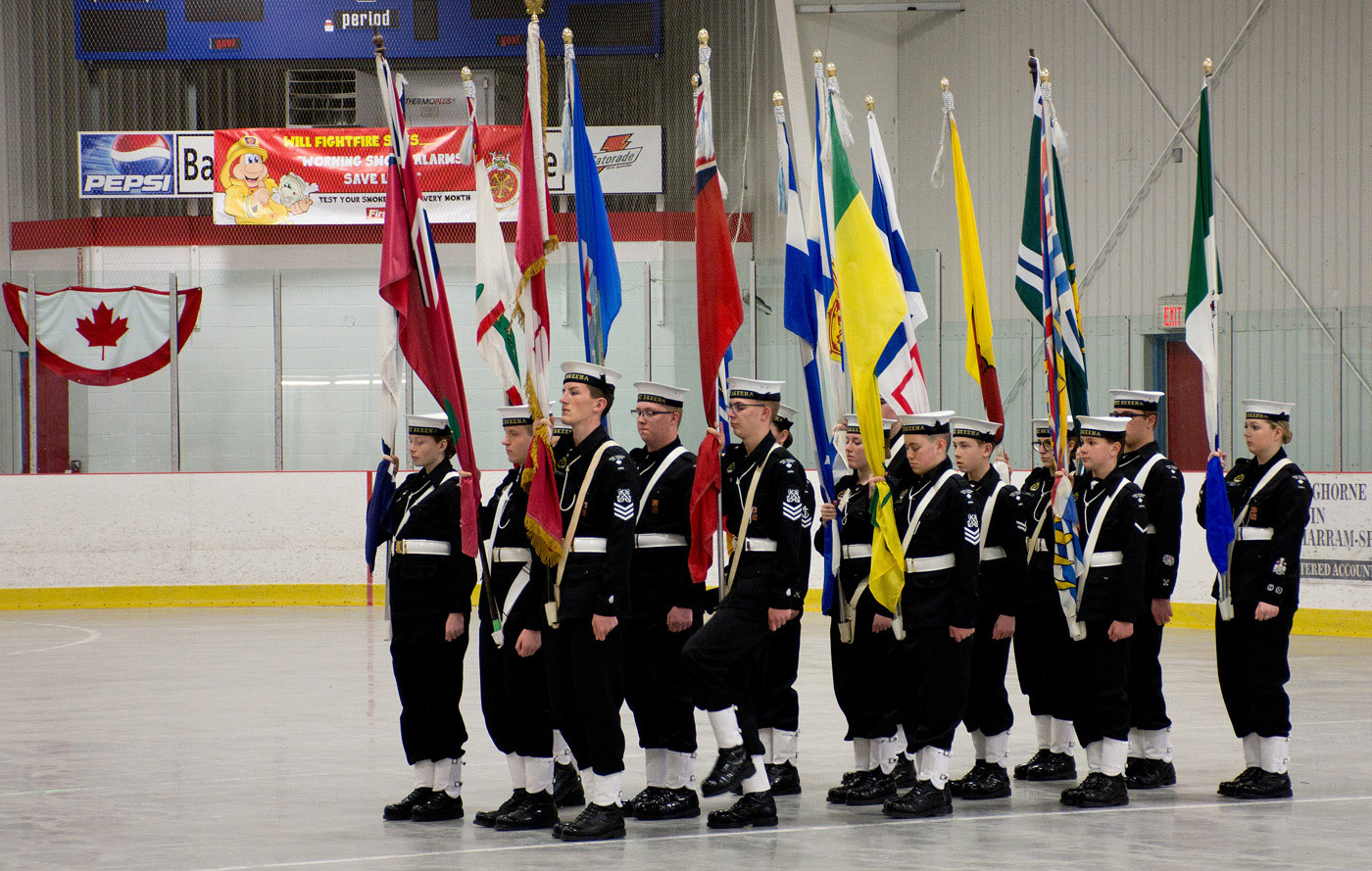 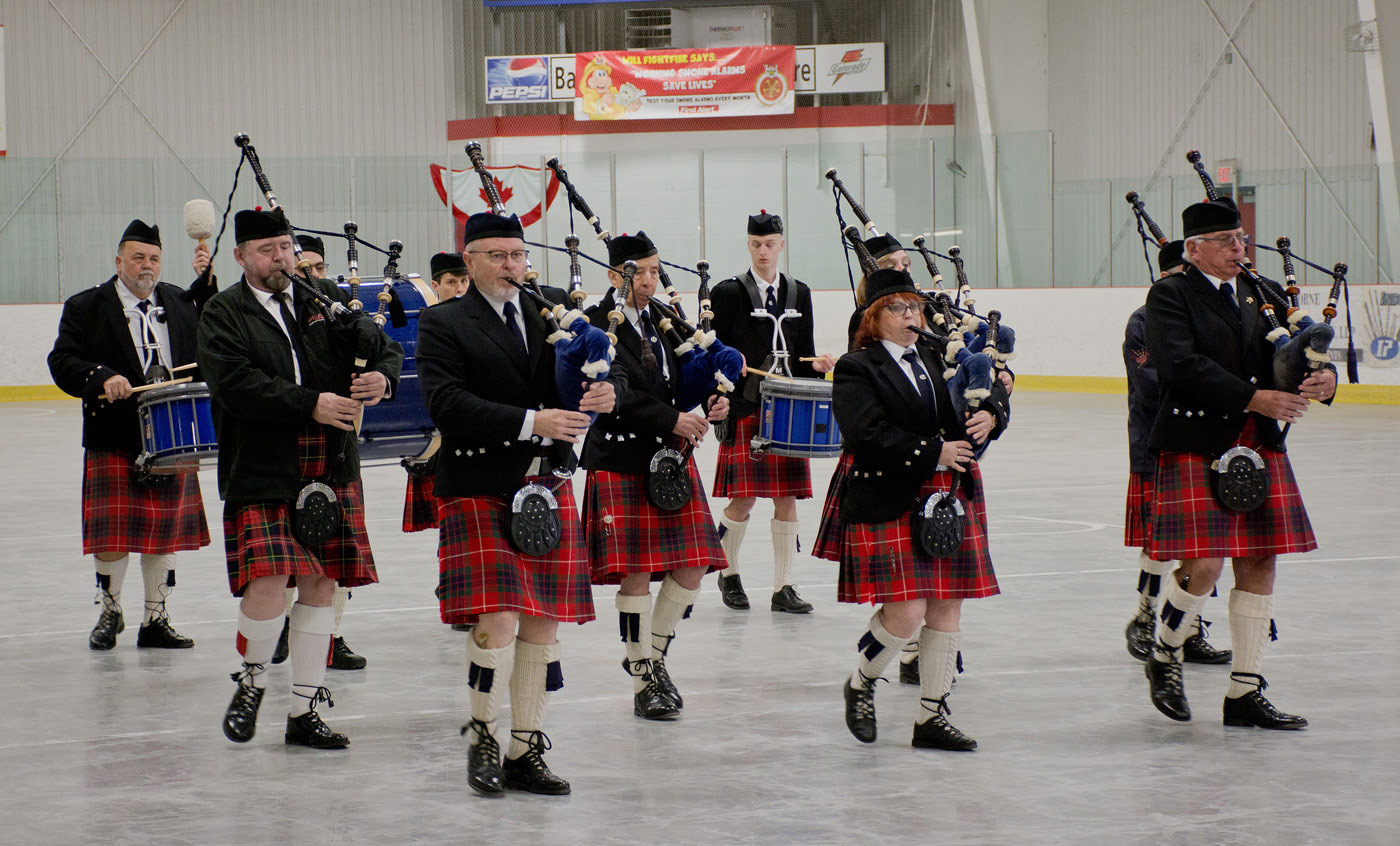 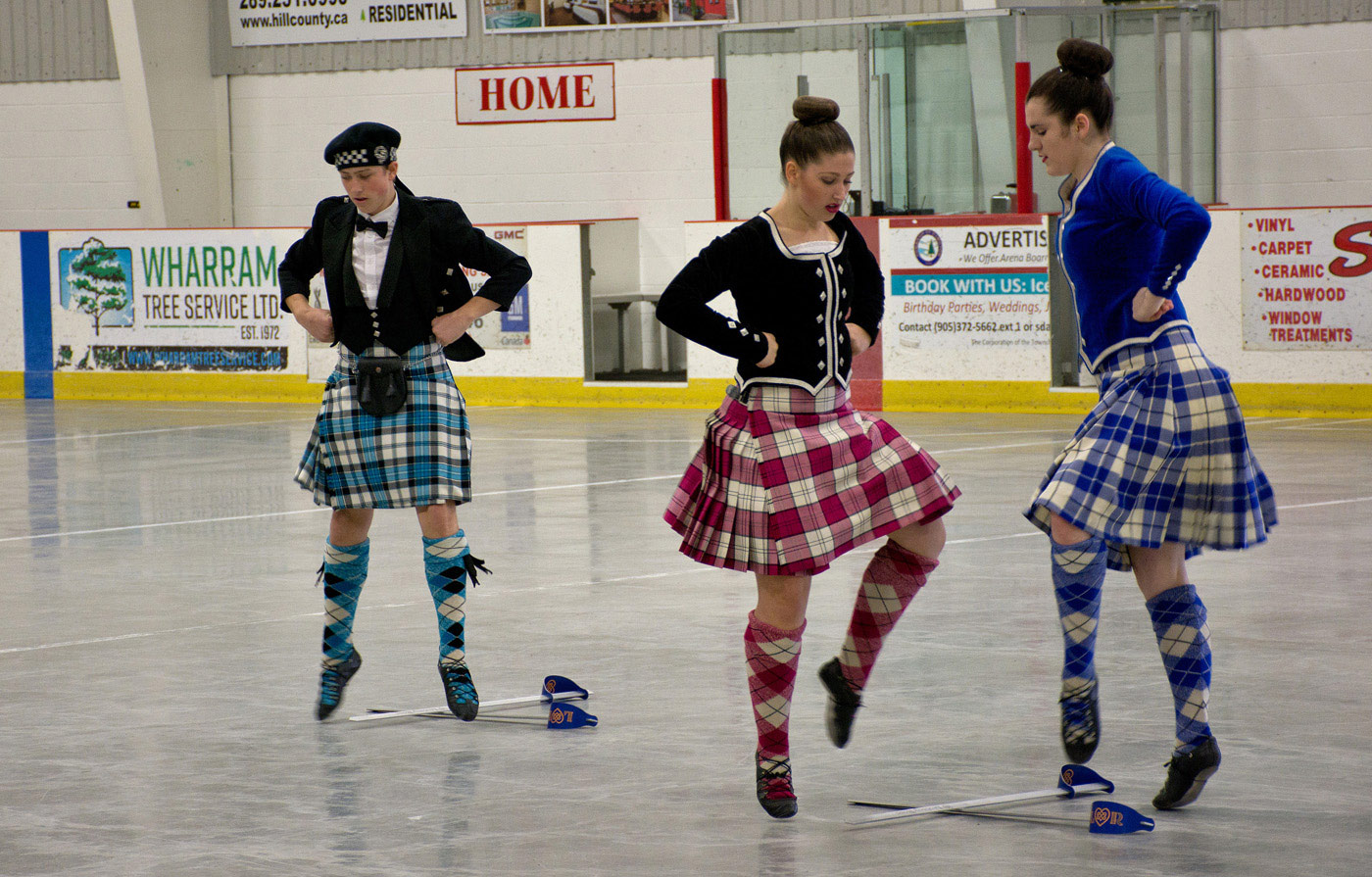 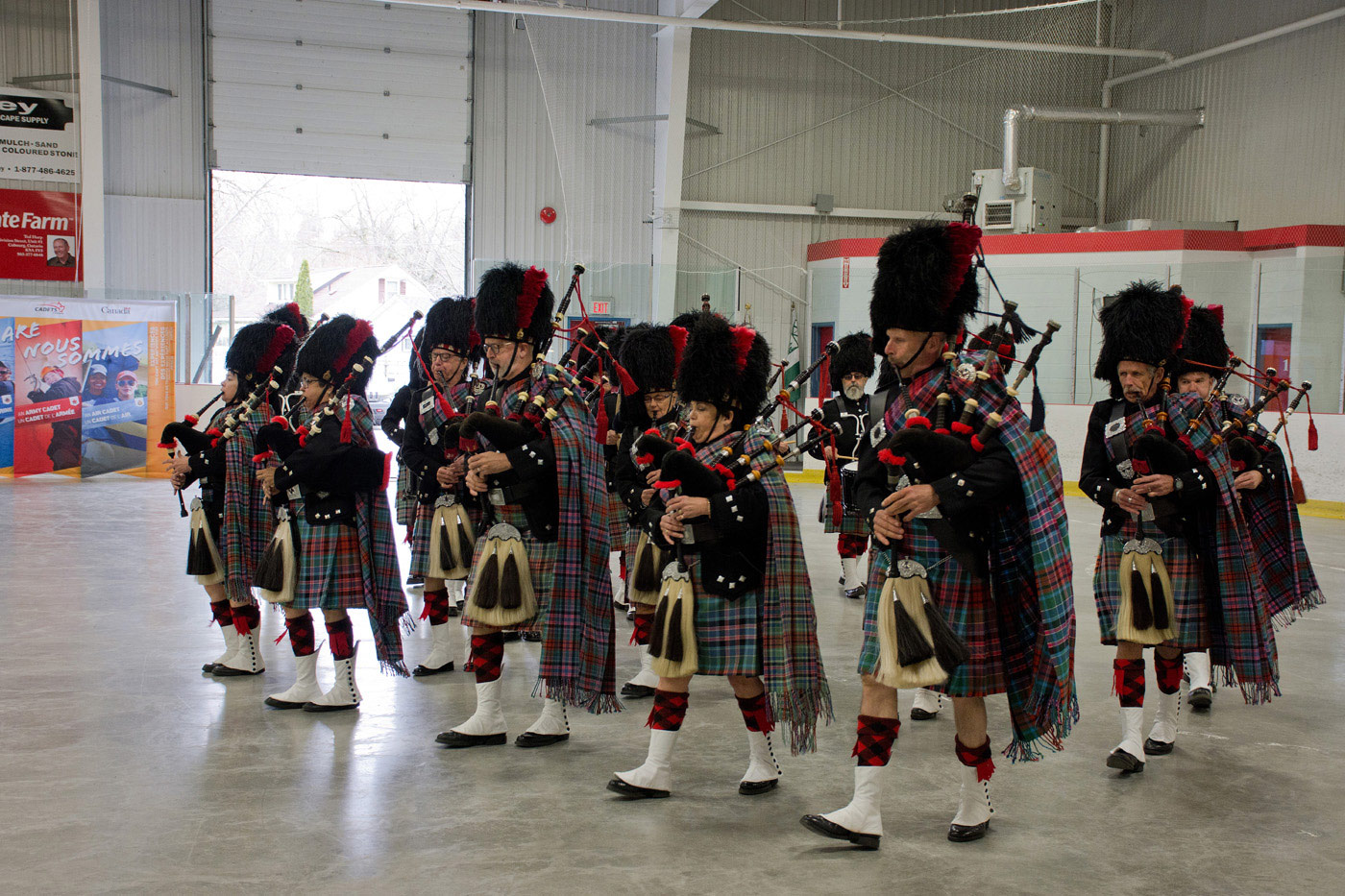 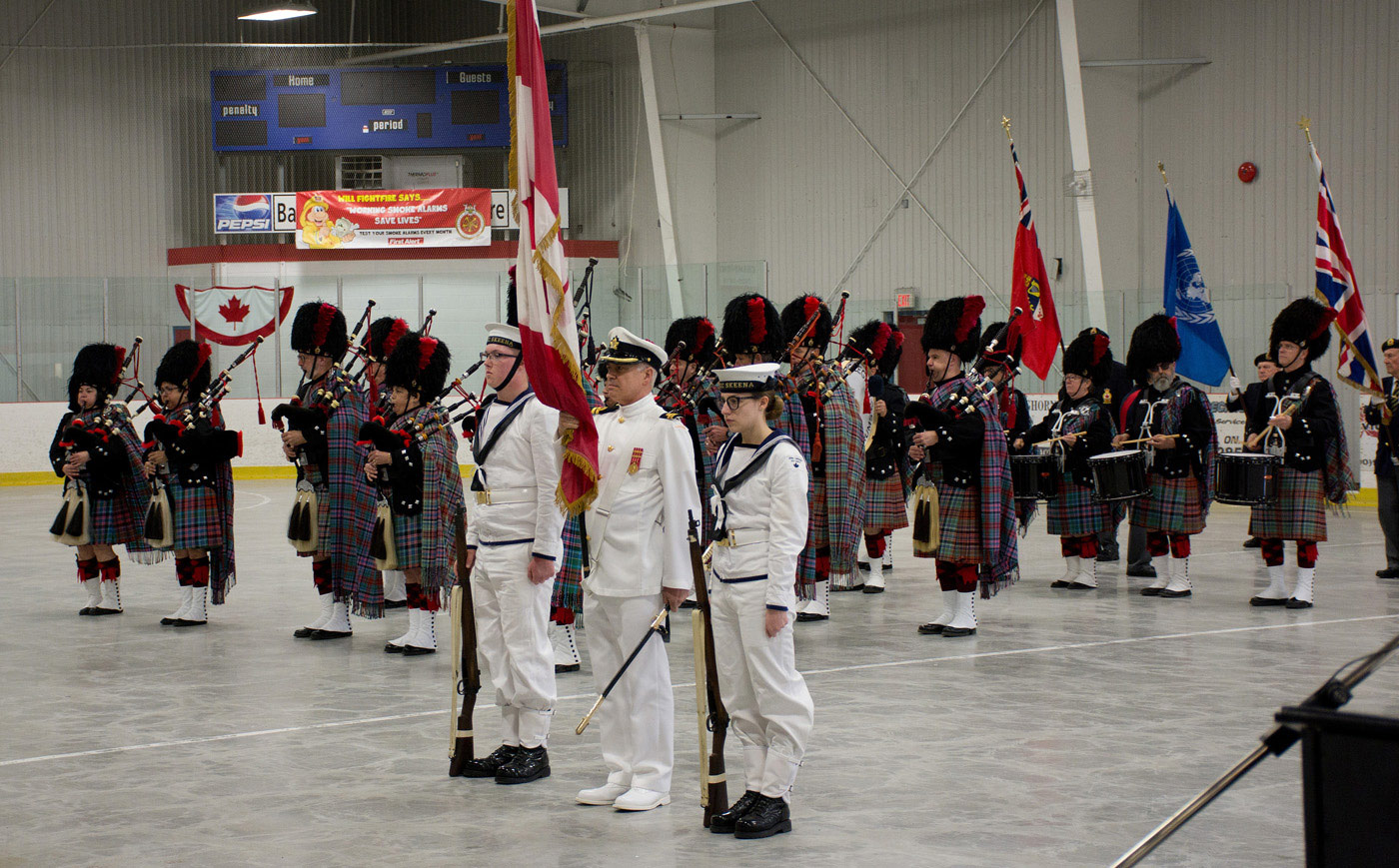 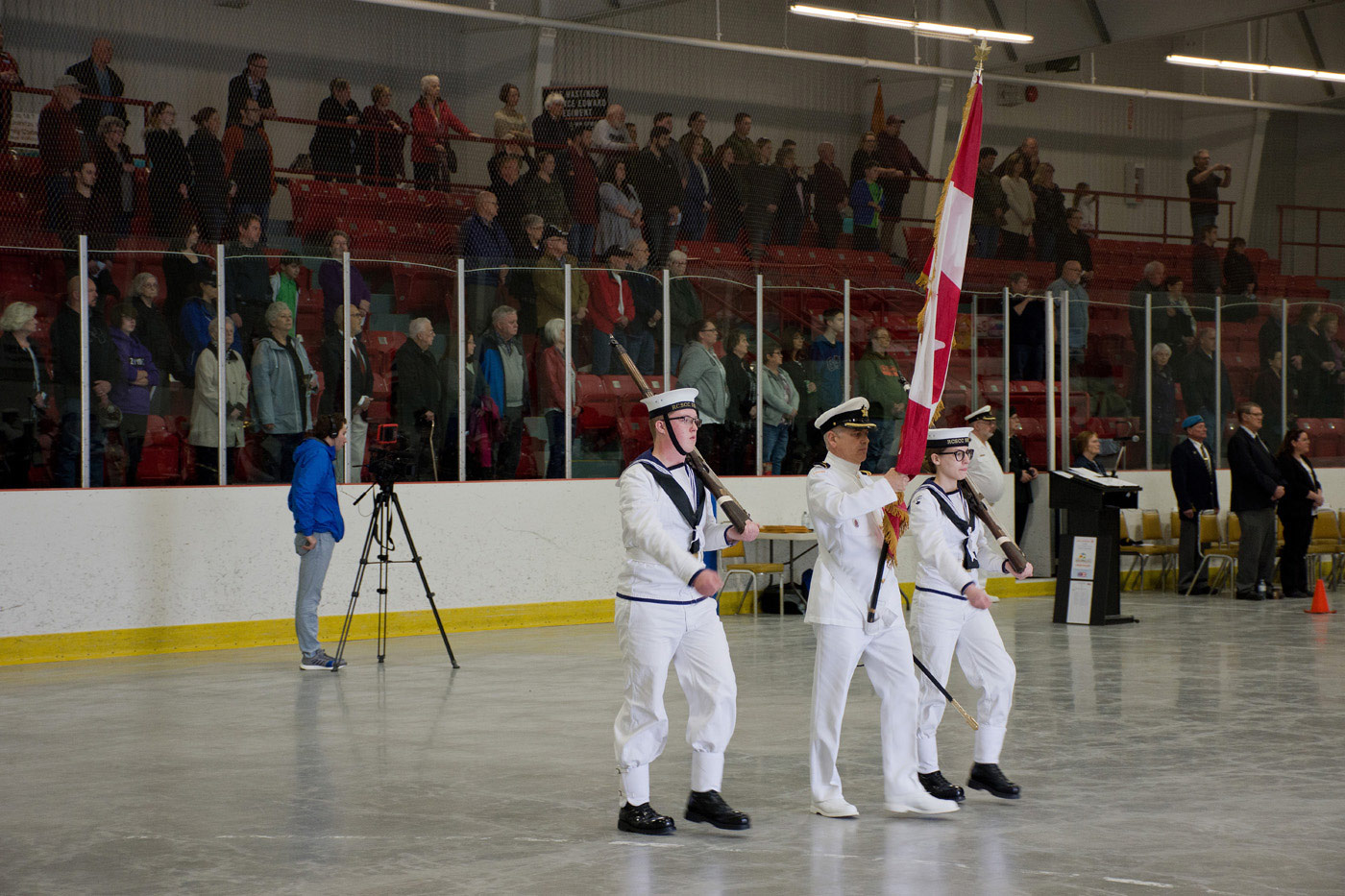 Leading the parade in Closing ceremony 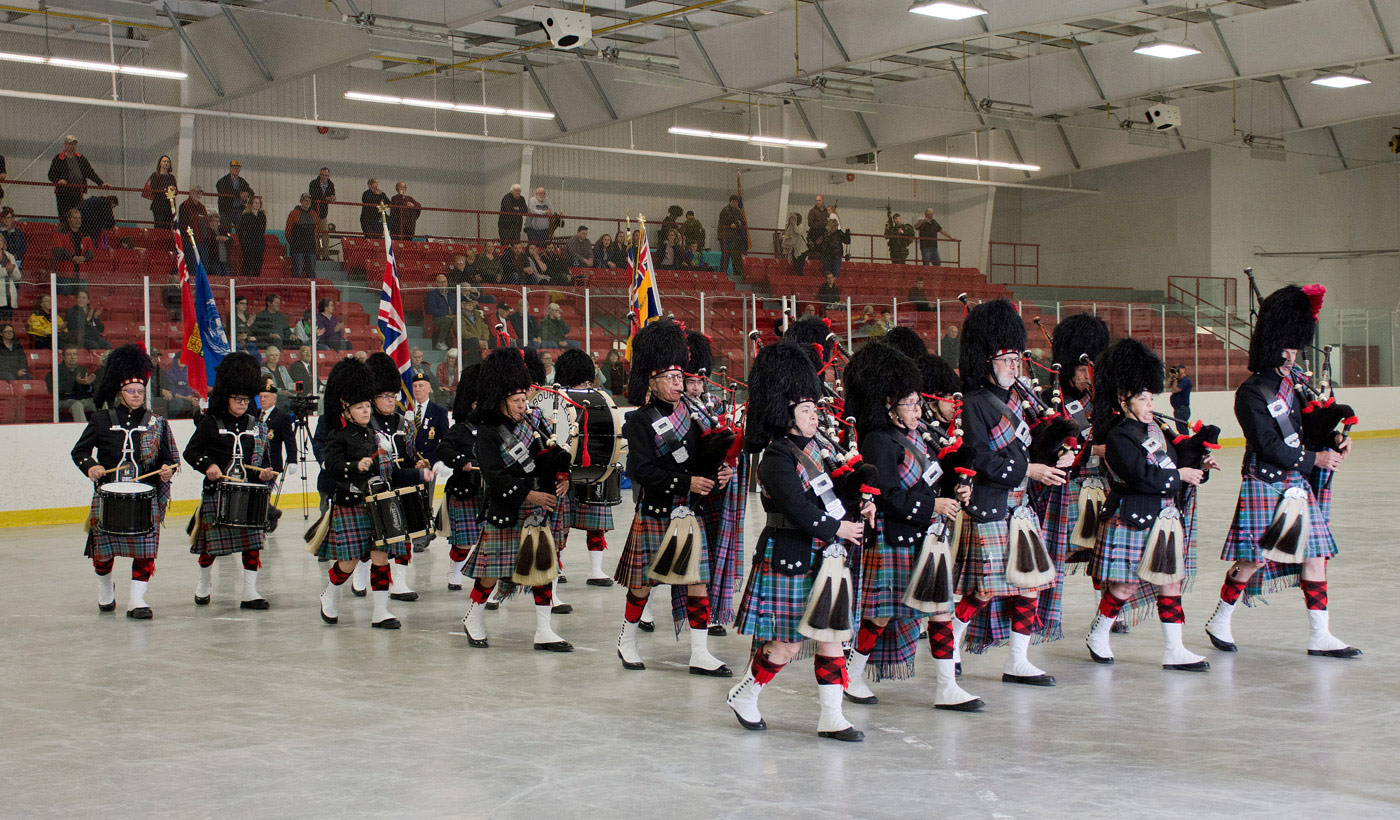 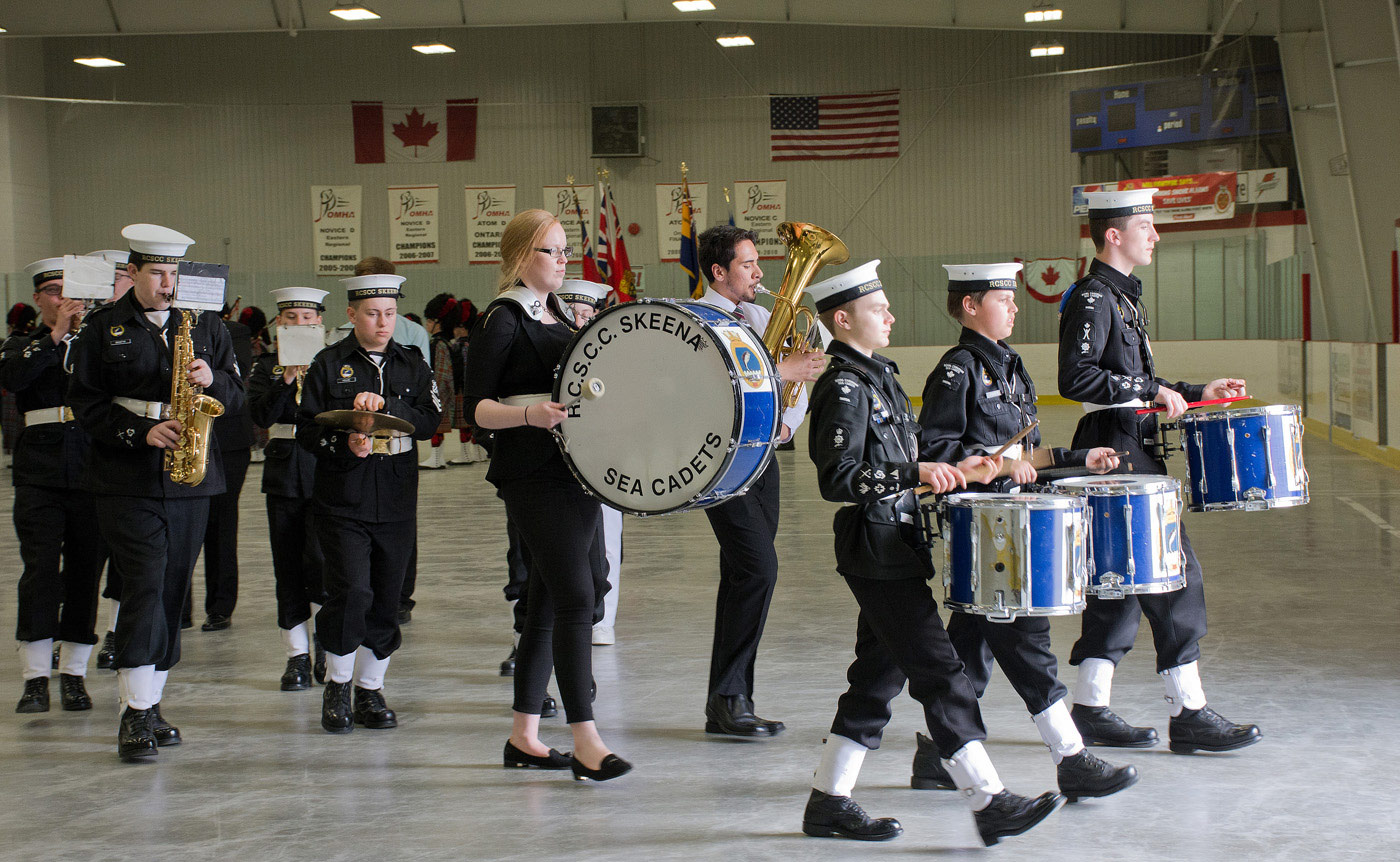 Skeena Sea Cadets Band - at end of the day 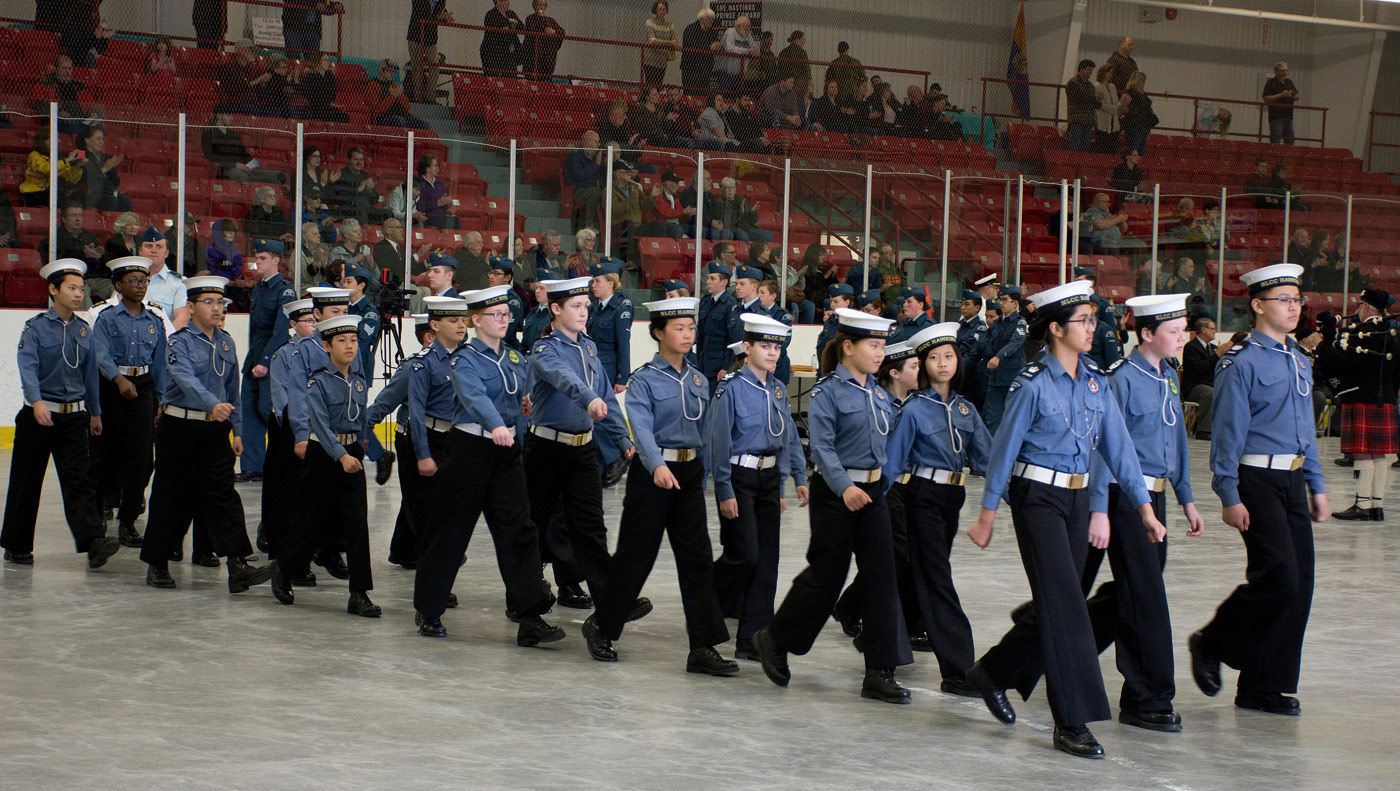 In the Links above, just click on Skeena Cadets and it will take you to their website.

I would like to recognize Lt(N) Dianne Kukavica, as it was her vision and idea of conducting a tattoo as one of our fundraising events as part of our Iceland/Skeena campaign. Also Heather Grundy, President of the Northumberland Branch of the Navy League of Canada. Together its our vision to raise the funds enabling the cadets to commemorate the loss of namesake HMCS Skeena this October in Iceland. I hope everyone enjoyed the tattoo and on behalf of all the participants thank you for your support.
Lt(N) Chris Barker
RCSCC Skeena

How do we deliver the Donation?

Four hours of entertainment, all for $5 a ticket. The drills were excellent and interesting to watch. The program began on time and finished on time – must be a military secret! We don’t have any young lads or lasses in our family, but if you do, the Sea Cadets looked like they were serious in what they do, proudly wore their uniform, but also knew how to relax in the parking lot.

Congratulations to Chris Barker and team who enlightened us on an activity in our County that we knew little about. The fundraiser had a good turnout, but if you couldn’t get to it, why not send a donation to help pay for the Cadets who are going to Iceland. Well worth supporting.