The Police Budget was presented to Council on February 7 and as measured by Cobourg’s Treasurer, the increase in spending for 2019 will be 1.42%.  Police Salaries make up a large part of the budget and they increased significantly more than that (details below) but the use of tiered Policing and better management kept the increase low.  One major factor was a savings starting in 2016 of $1.7M due to outsourcing of dispatch and 911 services to Owen Sound.  The Chief said that the cost of policing in Cobourg continues to be well below the provincial average. The other highlight of the meeting was the fast increase in income from “Corporate Services” – otherwise known as the service that does Police Record Checks for Police forces across Canada.

The Chief started his presentation responding to a critique of Police spending in a letter by Warren McCarthy.  He is obviously pleased with his success in keeping costs down and felt Warren had misunderstood Financial Information Returns (FIR’s) for Protection Services.  Chief Kai said he would provide Warren with a detailed response after the Police Board meeting on February 19. (Meanwhile see his presentation in the Links below).

The Chief said that tiered Policing requires a culture shift but it was working well with volunteer Auxiliary Constables and lower paid Special Constables doing tasks that they are capable of thereby relieving highly trained, armed and higher paid sworn Officers who would otherwise be assigned to these tasks.  The Police are also partnering with other organizations. One example is Cornerstone: the Police provide them with $30k and in return have access to the services of a specialist who would otherwise cost them $80K per year.  They also work with Rebound Child and Youth Services to help children under 12.  (Children under 12 cannot be charged with a crime – they are outside the Criminal Code).

In response to the concern that the Town has no say in the Police Budget, the Chief pointed to the fact that Police (actually just the Chief) report to the Board which has three representatives appointed by the Town and 2 Provincial representatives so they have a majority say.  However, Council may not review the budget line by line although on Thursday the Police did provide a good amount of detail (see link below).

Provincial legislation mandates that municipalities supply buildings, vehicles and other Capital items but in Cobourg, in the period 2004 to 2018, $5.7M in Capital came from Corporate Services.  This included a $1.6M investment in the Venture 13 building.

Corporate Services is expected to expand some more from the $3.2M revenue in 2018 (see the graph below); Deputy Chief Paul Vandegraff will be spending 60% of his time with it this year.  There are currently 41 staff working there with an error rate of virtually zero (< 0.25%).

Chief Kai Liu was also pleased with what the other graph shows.  The long term increase in the Police Budget since his arrival in 2012 is significantly less than CPI and since most Police Costs are salaries, surprisingly significantly less than cumulative salary increases.  It’s not just tiered policing that made this happen, but also better management.

The Police expect to spend $955K on Capital items including building renovations, computers, vehicles and other equipment with only $25K coming from the Town, most of the rest from their Corporate services operation and some from other reserves. 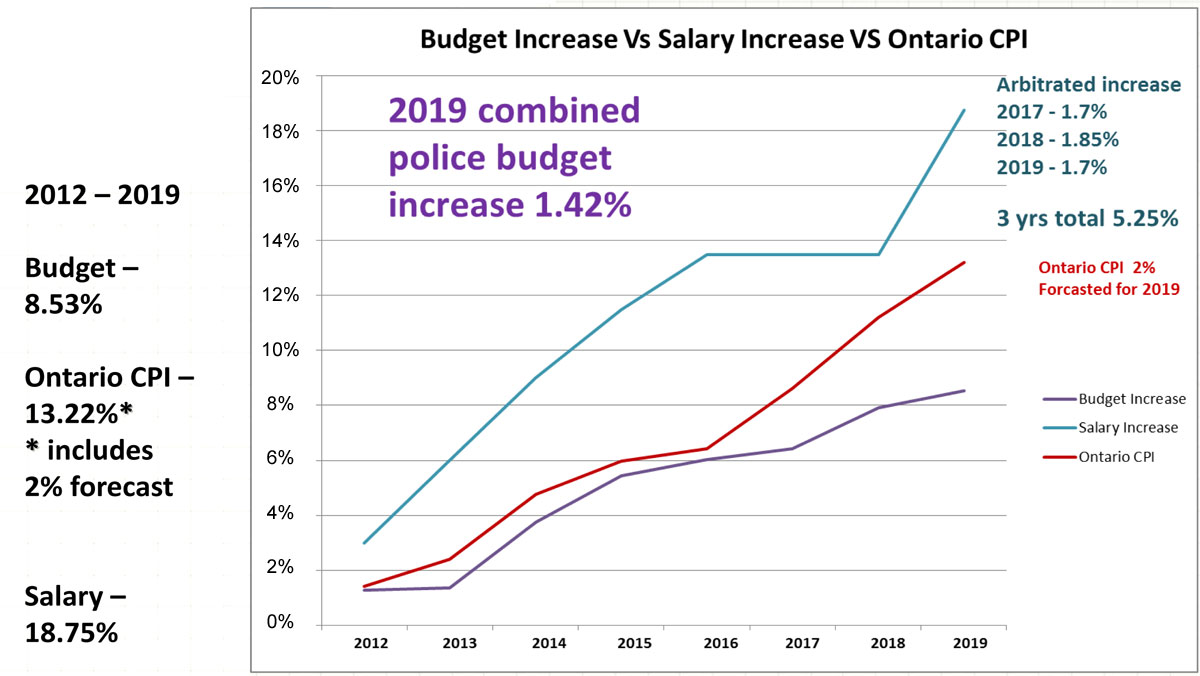 Because the format of the meeting was “Committee of the Whole”, there was a Q & A session.  I asked one short question to clarify the actual total estimated spending increase (1.42%). Bryan Lambert wanted to ask the Police some clarifying questions but the session was only for asking questions of Council.

Noted in presentation that Deputy Chief will now be spending 60% of his time with Business Services. Very significant change to job description for which his salary is based but did not see any reduction in his salary in budget. Hope all the female employees at Business Services are aware of Pay Equity. Then again why do we need to pay huge money for a Deputy Chief. We would even have an extra band uniform.

Not to be overly literally Kyle but it’s unlikely Pay Equity would apply – equal pay for work of equal value.

Are you saying it would not apply if there was a female manager their now and you are paying a male Deputy Chief who makes considerable more, I bet to do the same job?

Good point Kyle.
Why would a fully armed and trained police officer be needed to supervise folks who work behind a computer?

I’m sure there is more to do than just supervise folks working behind computers, but what qualifications does he have to spearhead a $3.2 million enterprise? Any previous business background or training at that level?

I thought I read from the reports that we are already at our maximum of front line officers.
And, might be clever money management (shell game?), but if you have the wrong guy running a $3.2 million enterprise it just might turn into a $2.2 million enterprise.

Had an interesting talk with a knowledgeable LCBO employee.
Asked whether thefts here are a problem just like in Toronto as uncovered by the Toronto Star.
Employee confirmed that LCBO staff here, as in all Ontario, are forbidden to confront shoplifters and Police won’t respond to petty theft calls unless the suspect is still on the premises.
Apparently similar thefts occur locally at Metro, No Frills, Walmart and Home Depot.
Staff at all of these outlets are frustrated at the lack of Police protection.
Wondering whether we will see paid-duty officers and/or private security guards in these retail locations.

Sad. Get paid by the public to do nothing. Then get higher “paid duty” rates from the victims. I guess you can’t chase criminals with kilts on.

“petty theft” … petty to whom? Theft is theft. “Petty” is a bar that gets moved a lot depending on expediencies, circumstances and who’s involved. And then we wonder why we just can’t seem to make permanent improvements.

Empire building at its best in Cobourg…time for a new OPP cost comparison.

What really is going on
https://www.todaysnorthumberland.ca/2019/02/11/issues-concerning-release-of-information-by-cobourg-police/amp/?__twitter_impression=true