On July 29, from 9:00 am to 3:00 pm. Cobourg Police teamed up with the Ministry of Transportation, the Ministry of Environment and the OPP to do a blitz in accordance with the July S.T.E.P program.  For the month of July,  S.T.E.P. (Selective Traffic Enforcement Program) focused on unsafe loads, commercial motor vehicles, unsafe motor vehicles, modified motor vehicles and loud mufflers (unnecessary noise violations).  The blitz resulted in 22 charges for violations – details are below.  A temporary inspection site was set up in the parking lot of the Fellowship Baptist Church on Elgin near the corner of William/Burnham. Below are some photos of the event (supplied by the Police) plus I have added some highlights of Cobourg Police activity in the past week.

Some of the Provincial Charges laid were:

Each week, Cobourg Police report on their activities.  For example, the report for July 22 to 28 starts with the following:

Here are some examples of calls for service for the week;

Then under the heading of each day, two incidents are detailed.  Go here for their full report of July 22 – 28

Here are a couple of examples:

July 25
Police received a call for an assault that had just occurred at a residence near the downtown. At the Cobourg Police Service, police took a statement from the victim, who had bruising under her eye. Police located and arrested a female a short time later for the assault and she was released with a court date and conditions.

Police were called to a downtown business for a report of an assault. On arrival police spoke to the victim who alleged that he had a verbal dispute with another man who had assaulted him by punching him and then kicking his shin. No visible injuries were apparent to police and the victim declined medical assistance and did not want charges laid in the incident.

Then on July 29, Police reported another drug bust:

Police were dispatched to a downtown address regarding a suspicious man on July 27, 2019 at 9:53 am. Police located the man and upon making contact, police observed in plain view, the man to be in possession of a small quantity crystal methamphetamine.
The man was identified as 27-year-old Matthew Lebold of Cobourg. Lebold was arrested and charged with possession of a schedule 1 substance, contrary to section 4(1) of the Controlled Drugs and Substances Act. Lebold was released on a promise to appear with a court date in August.

You can see all Police Press Releases at this link 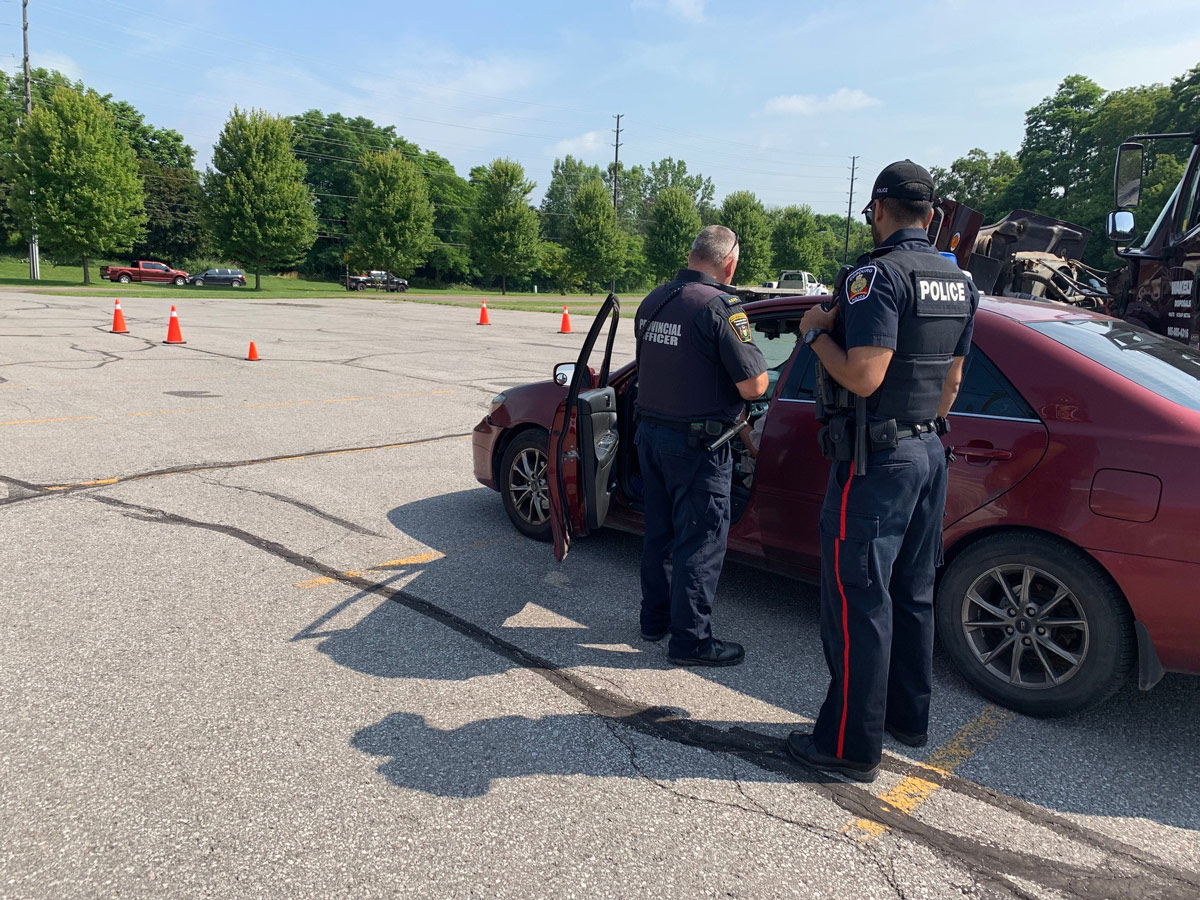 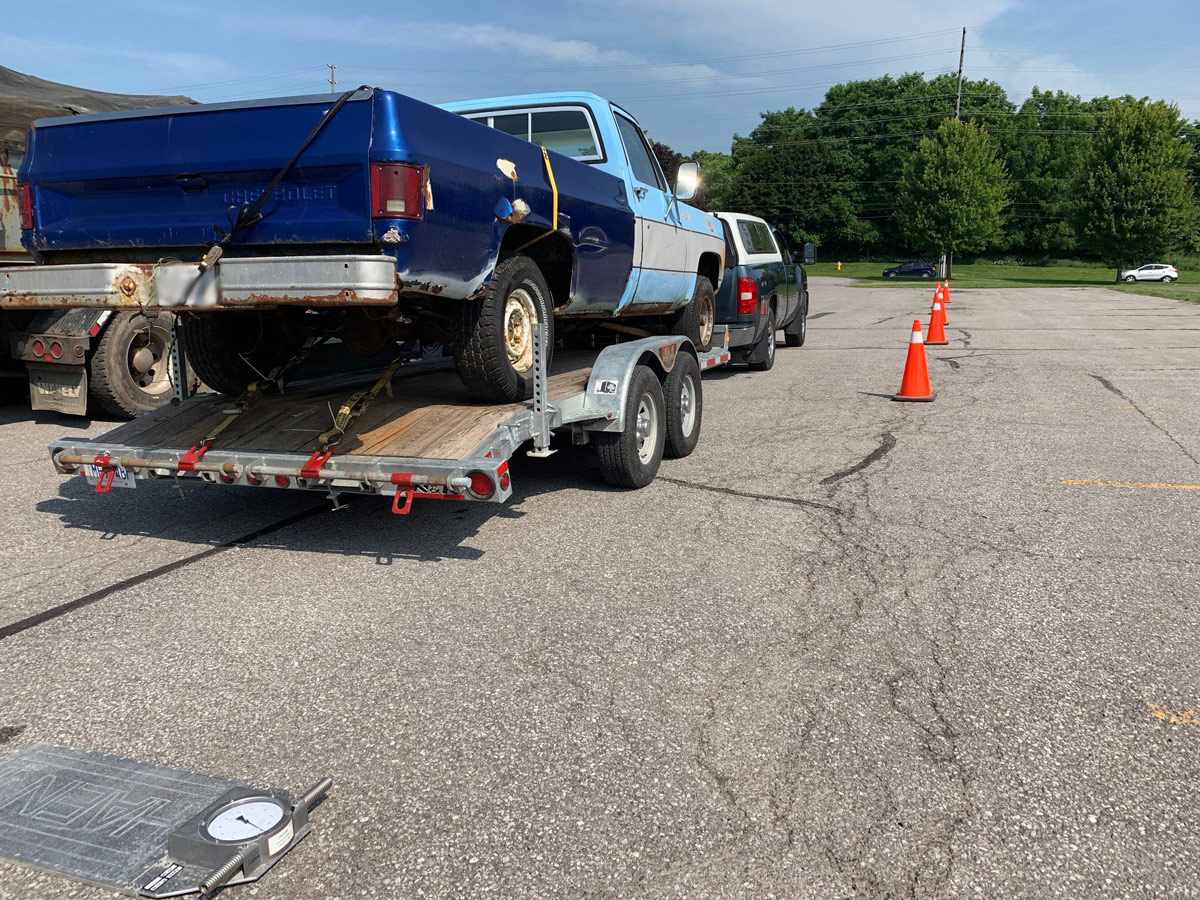 Police have issued a statement of the results of their July S.T.E.P. Blitz – see below.

The safety check on vehicles and drivers is a good idea. A big thank you to the inspection teams. Public safety on our shared streets is important to all of us. I too am surprised at the number of issues found. On motorcycles, I do not have issue with typical engine noise of most machines even if they seem loud compared to cars. It is summer and time for fun and enjoyment. The ‘noise’ comes and goes. Most motorcycle drivers are very responsible people when using public roads. Consider that in California, for example, motorcycle noise is also strictly regulated as are leaf blowers. In Los Angeles gas powered leaf blowers can not be used within 500 feet of a residence. A gas leaf blower is louder than a typical motorcycle. And, in a recent CBC report, it was revealed that the typical two stroke engine of a gas powered leaf blower releases about 30% of the fuel directly into the air as an aerosol. In addition, the interviewee noted many of the particles made air borne from pavements like sidewalks and roads are carcinogens. Pollution in the air we breathe.

Some features of small-town life never change. In the 60s cars packed with teenage boys would cruise back and forth between the shiny new East high school, along King onto William to the sacred site of Dairy Queen. There a soft cone dipped in chocolate went for 15 cents. Then, back downtown to do it all again.

There were just two police cruisers in town so everyone knew if you saw one downtown the other would be in the north end somewhere. Easy to avoid.

Local hippie culture moved all the action to the Park where it belonged. Much better environment for taking psychedelics. Yet this post tells us car culture is still alive and well for many adolescents. C’est la vie!

The reality of Cobourg is that the new “adolescents” are the 50+, balding, wanna be bikers riding their new polished Harleys with the mufflers removed so we are all apparently supposed to take notice of them. Take heart though, as the “Boomers” loose their licenses there will be some great deals on barely used Harley’s.

The reality is that we are prosperous beyond belief. Enjoy a coffee at 66 king St E. Sit outside. In the space of a summer afternoon hour, millions and millions of dollars will have passed your eyes in the form of sedans, suvs, pickup trucks, motorcycles, (noisy or not), delivery trucks, etc. Every single one of them collectively pollutes the environment to the tune of billions to clean up. But let’s point out that the noisy Harley is less of a polluter than many 4-wheeled vehicles driven by righteous citizens.

Actually Harleys are not less of a polluter

I read the article and it said “These results made it difficult for the MythBusters to draw any clear conclusions about which type of vehicle is greener.”

But you claim that Harleys are “not less of a polluter.” The article you provided contains nothing to support your specific contention. Motorcycles are seasonal in Canada. They are not driven as often as 4wheel vehicles, thereby burning less fuel on a cumulative annual basis. The brief little spotcheck by Mythbusters is insignifcant.

Note that Kyle’s contention does not refer to my assertion that a Harley is less of a polluter than many 4wheel vehicles. Those 4wheel vehicles, pickup trucks, delivery trucks, suvs, which I had mentioned, were not addressed in the Mythbuster’s article, which was as vanilla as one can get for details.

So produce the evidence that claims “Harleys are not less of a polluter.”

Also you should note that most Harley owners have removed factory installed pollution equipment to increase their get attention noise.

The South Park episode “The F Word” does a great job of satire on Harley owners.

Local hippies in Victoria Park were kept under surveillance by the Peterborough detachment of the RCMP, Narcotics Division. The narcs perched themselves on the second floor of the Federal Building overlooking Victoria Park for dreaded pot smokers. They caught a few each summer — sentenced them to time and fine and saddled them with “narcotics” record, destroying their chance to travel abroad or inhibit job acquisition. There was a broad swath of good Cobourgers who thought pot was evil incarnate. On one occasion, Foster Russell, editor of the Cobourg Sentinel Star, parked near the beach one evening and watched a group of 4 or 5 hippies on the beach around a small bonfire. The following morning he returned to find that the hippies left, there was no campfire remains (They put the debris in a metal bin and clean the area up. Although, he made this a front page story, people still insisted hippies were longhaired lice-infested dirty smelly deplorables. Back in those days, young people could stay in the park after 11pm, laying on the beach under the night stars to watch the Perseid Meteor shower, stoned or not stoned. But always there is the presence of the perennial social whiner.

Glad to read this… I actually recently wrote Council about the problem myself. In addition to the motorcycles and loud car mufflers, the Town’s buses also need attention (altho’ I’ve been advised that the nosiest one is an older bus currently back from “retirement” to temporarily replace an ailing newer bus).

If the police did a Blitz on University Ave. East they would certainly accrue lots of $$$ via fines given out to both speeders and those unbelievably noisy motorcycles and vehicles with souped-up extra loud mufflers! It’s a run where some drivers feel they can really “let ‘er rip”. SIGH!

I am very glad to hear that the police were going after excessive noise. It seems to be a popular thing to do to accelerate down the bottom end of Ontario for maximum noise. Maybe because they know it is a dead end. Perhaps the police might also have a listen to the Town buses. Extremely noisy when picking up speed – or is it a driver with a leaden foot??

Excessive noise along King Street West. Modified trucks and motorcycles seem to gun their vehicles before coming to a stop at William and the reverse coming off William onto King going towards the police station.

Have been concerned with the heavy foot apparent constant need to accelerate eastbound on University from College for this bus. Is there inadequate runtime on this route?
Safety should take precedence over time shown on a schedule. Perhaps a little of that highpriced police oversight can tone down the drag racing?
Let’s not even get into the number of vehicles that do NOT stop for stop signs.😡

The same excessive speed and noise occur on Third Street, south of Albert Street – then to come to screeching stops at the Esplanade with unseen westbound vehicles exiting either north or south onto Third Street…

Perhaps a regular blitz on the Division St to D’Arcy Street noisy speedway may also help prevent a serious accident ,not to overlook the repetitive one way traffic violations on Church Street south during the week-ends.

I wish that we would conduct a Blitz on Car Break ins and thefts and damage to vehicles at night
around here our area here south of King st has a ridiculous number of car alarms going off after 10 PM
My immediate neighbours and I have had many incidents over the last 3 wks of people setting off car alarms trying to breakin . The Police advise thats what happens here every yr with the onslaught of tourists and transients .
Must be a seasonal thing like Hot rods and noisy vehicles

The number of offenses seems startlingly high. How many vehicles were pulled over?
When one thinks about all the times we are on the road and exposed to the dangers of these unroadworthy and uninsured vehicles it might be worthwhile to do this STEP more often.