There’s been a lot of discussion recently on the need for affordable housing in Cobourg – both new and rental. But many in Cobourg own their own house – in 2016, according to the census, there were 8,788 households in Cobourg and according to CMHC, in October 2018 there were 1068 rental units. The difference of over 7000 are mostly homes that are owned although perhaps with a mortgage. For many of these 7000+ households, this also represents a large part of their net worth and therefore their savings for retirement.  So the sale price of their home is important and the good news is that despite well-publicized talk of prices dropping, they have not. (Or bad news for renters). The same is true for Toronto and both markets appear to be relatively healthy.

According to people currently looking to rent a house, rents are increasing and it is thought that this is because landlords are paying higher prices for the houses so have bigger mortgages so need more to cover their costs.  That is, higher house prices also cause higher rents although some will argue about the connection.

But one can dispute these numbers.  For example, according to CMHC the average market rent in Toronto for a 2 bedroom unit is $1,426 but web site Padmapper puts the average rent for two bedrooms in Toronto at $2,850.  Quite a difference. (Padmapper does not cover Cobourg). 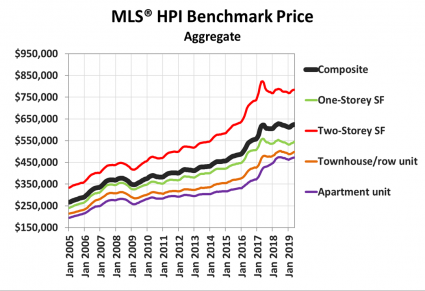 When the average house price is provided, it includes all types of housing but it’s not only mainly location that determines price but also whether it’s a single family one storey or two storey or townhouse or apartment style.  The graph at right gives an idea of the differences – all of Canada (note that it’s not directly comparable to the trend graph below). For example a Townhouse is about 70% of the average but a two storey single family house is about 25% higher than the average.

Here are some statistics for West Northumberland.

Below is a graph showing prices for Toronto and West Northumberland since 2009. 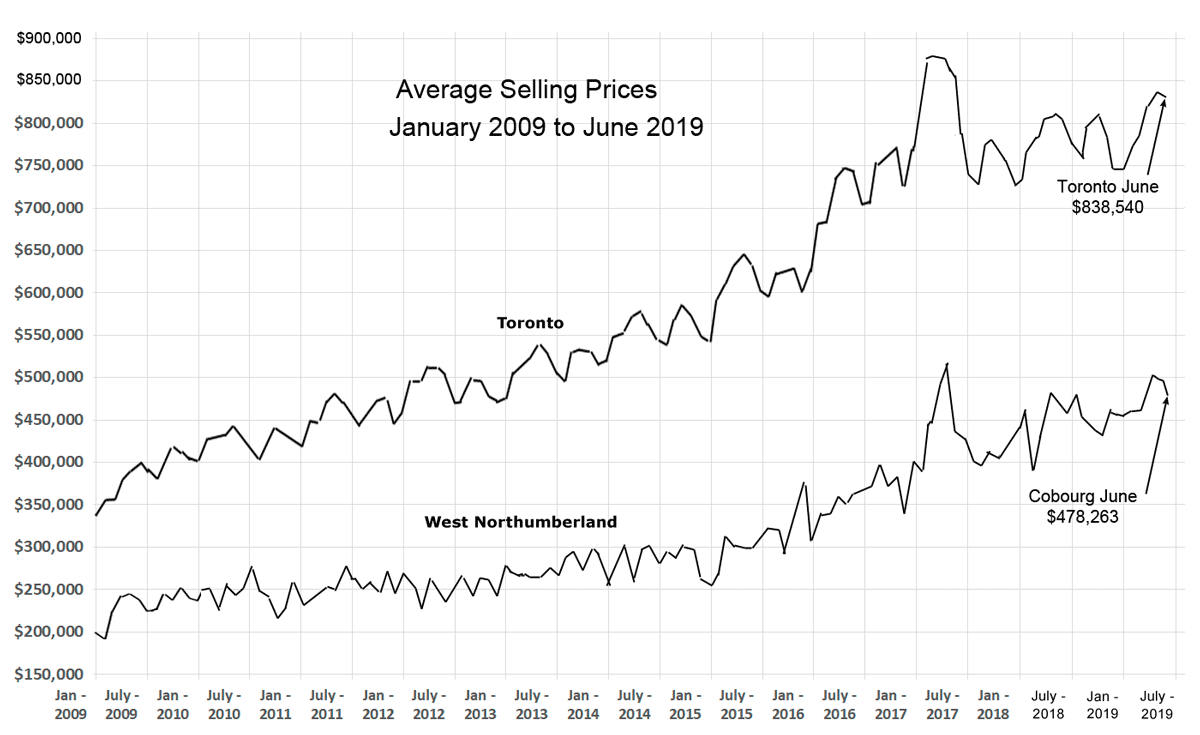 I would say that rentals in Cobourg are higher even acknowledging your 2018 statistic. I would say an average rental in Cobourg is $1500.00 per month. If you were specifically looking at detached houses for rent more like $2000. The issue is the scarcity of rental accomodation.

John reports that the average value of a detached house is $478,263. Investing that capital in a 5-year GIC at the current average rate of 3.05% would yield about $1,215 per month. Rent must pay for property taxes (average of $3,909/year or $325/month in Cobourg) plus insurance plus repairs plus… The problem is not the scarcity of rental accommodation but simple arithmetic.

On the other hand Bellville has 2 Bed rm apartments 900 + sq ft 2 bed Rm in 10 & 15 story buildings
with lots of amenities
like Pool , some covered parking , Exercise rm. etc at only $1,350 .– all utilities included I discovered this as a Long time realtor friend recently moved there in June for this very reason They also have a Regional Hospital Beaches Marina and much more shopping and healthy active malls .

As a former real estate agent, I prefer to use the median price vs the average price for a more realistic view of the market.