In 2016, consultants were hired and public meetings held to explore the feasibility of the YMCA moving to the Cobourg Community Centre (CCC) but in 2017 the idea was shelved because it was too expensive (cost perhaps $25M).  The YMCA centre and particularly its aquatic centre (pool) is reaching end of life and Leslie Murray of the YMCA will be presenting the case once again at Council’s Committee of the whole on Monday, November 4.  Leslie is General Manager – HFA (Health, Fitness and Aquatics) Operations & Community Development.  She quotes from a 2017 report by the consultants (link below) that documents the current situation, our demographics and public opinion.  The report recommends a merge of facilities – in particular to provide a pool at the CCC.  It also points out the need to do a lot more work including design and the need for negotiations between the Town and the YMCA on who pays for what.

Leslie plans to make a request to the Investing in Canada Infrastructure Program and wants a letter of support from the Town.

She quotes the consultants who highlighted the following:

The current YMCA pool was built in 1980 so is almost 40 years old and current practice would make a new pool more attractive.

She provides a “draft letter of support” – see links below.

She does not (of course) mention the negatives brought up when the public were consulted – for example:

Leslie is also facing an uphill battle when grants are decided – it’s unlikely that Cobourg would be given Government money for all three major projects that are being applied for this year:  1) Waterfront repairs ($10M),  2) a new Town Square (Victoria Square – $1.5M) as well as 3) a new pool at the CCC ($25M).  But maybe the bureaucrats like the idea?  Give her marks for trying – let’s see if Council approves the idea.  The deadline for applications is November 12 and if the grant is awarded, the Town would still have to find 27% of the project cost. It would have to be completed by 2027.

Despite the recommendation of the report from the consultants, Leslie Murray informs me that her plan is NOT to build a pool at the CCC but to expand/improve the pool at the existing facility on Elgin Street.  That will mean the estimate of cost is different.  She still needs support from the Town but she’s not planning to move to the CCC although that was originally thought to be the best way to upgrade aquatic facilities in the Town.  If the aquatic centre stays at the YMCA facility, the organization issues would be resolved.

The Joint Town/YMCA committee evaluating the issue reported to Council in August 2017 – download their full report here. The relevant recommendations are as follows:

Hopefully, the YMCA delegation will make it clear in their presentation to Council that it’s an upgrade to current facilities being planned, not a pool at the CCC as was recommended by the consultants and as was discussed in the public meetings at the time.

The YMCA is located on ~ 17 ares, bordering on Elgin Street. Does anyone know who owns this property? Is it owned by the YMCA? In my view trying to mix the Y with the CCC is not the best avenue to take. The Y is better located for people to access, refurbishing vs rebuilt seems appropriate as 40 years is not that old, and the grounds accommodate parking and can handle an expansion – other activities.

A pool is a lot more than a large tub full of water. For many people with challenges to their ability to exercise, swimming can be a way to healing. Lockers, washrooms, showers, change rooms, accessibility for all of it—just a simple start. Add a number of amenities for our aging population such as an essential heated pool, saunas, etc. and it isn’t too hard to realize that it will take more than a few bucks to make it happen. One thing is clear in my mind: Cobourg needs a good aquatic centre easily accessible and available to all and the sooner the better.

Fancy? Hardly. Just something that works for most people. Check out the pools in Peterborough and Newcastle.

It’s not clear why the YMCA can’t just update thier pool at the current location. Other towns like Peterborough have wonderful YMCA facilities. Why do Cobourg tax payers need to add this to thier burden. The CCC already costs money. At $25 million pool won’t be free either! 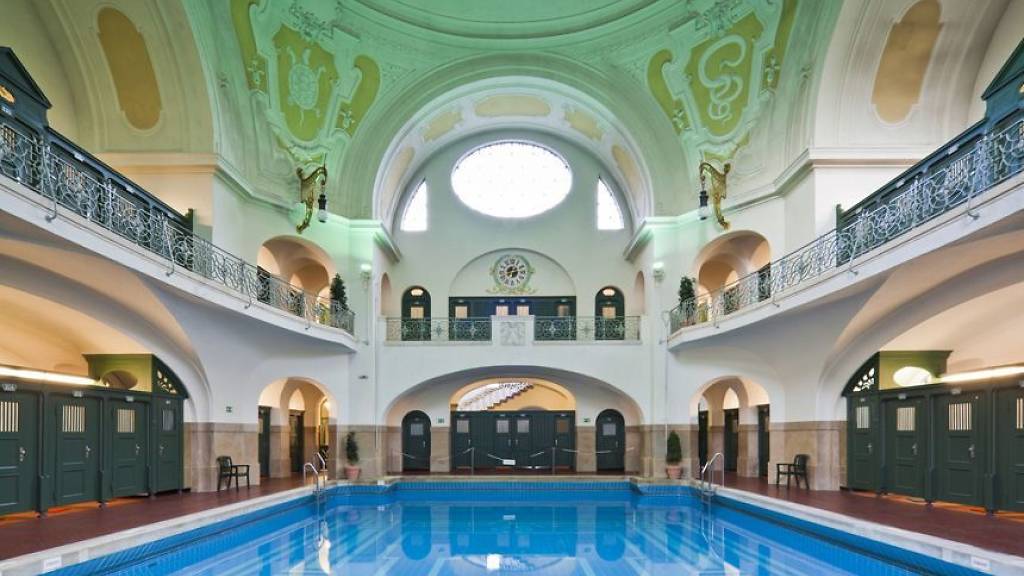 Interesting to hear that the Y pool is nearing the end of its life span after 40 years.
The Muellersches Volksbad in Munich was built in 1901 in the Art Nouveau artistic style.
It was donated to the city as an aquatic complex for poorer citizens.
The 100-foot-long pool, heated to 80 degrees fahrenheit, was once for men only, while a smaller, slightly warmer pool was for women—both are co-ed now. The Roman steam baths boast Baroque touches such as murals, stucco, bronze statues and ornate iron work.

If you can build the pool for a million, offer to build it for 5 million and walk away with 4 million cash!