At Tuesday’s regular Council meeting, Judy Smith made a presentation that gave an update on Cobourg’s 2010 Climate action plan and recommended actions to achieve the 2050 goal of net zero emissions.  Judy is the Environmental Officer for Northumberland County and also the Climate Change Coordinator for the Town of Cobourg.  She described the overall performance of the Town in meeting goals – that’s the whole Town, not just Municipal operations. Using a tool provided by FCM (Federation of Canadian Municipalities), Judy established a baseline then measured progress in reducing GHG (Greenhouse Gas) Emissions.  Although good progress has been made, the next goal of 80% to 100% reduction by 2050 means that “we should start on it now”.  She lists actions in five categories that provide a “Running Start”.  Although she stressed affordability, she gave no details as to how these actions would be paid for. 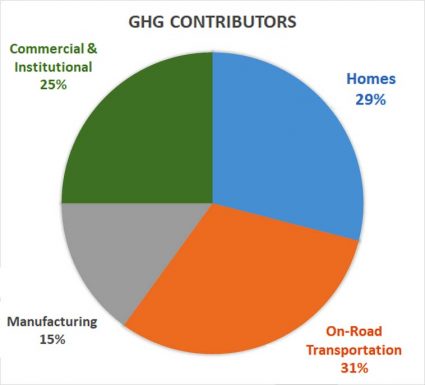 Summary of Judy’s report – see link below for full report.

The Manufacturing Sector has fallen from a contribution of 34% in 2007 to less than 15% today. This is because of fewer manufacturing plants plus efficiencies and less carbon being used to generate the electricity used.

Today the share of GHG contribution in Cobourg is as shown in the pie chart.

GHG emissions have risen slightly since, yet by 2018 we surpassed the provincial and federal GHG target of a 30% reduction in greenhouse gas emissions below 2005 levels by 2030. In fact, we have made a 47% reduction below 2005 GHG levels.

Judy said “Climate scientists say we have 10 years to flatten the curve to prevent serious runaway climate change” and she presented the graph at right.

Judy reminded Council that they declared a Climate Emergency in November 2019 – see link below.

After the presentation, Councillor Chorley asked if there was one major initiative, what would be Judy’s recommendation?  Judy said she’d choose using the CIP to improve housing.  [Most recent post on this here.] She went on to say that she sees Cobourg as a leader in this matter in Northumberland.

This was the first meeting where the original iCompass video (on You-Tube) was not working but the new escribe system was – and it had differences (details here on what it’s supposed to do).  See the addendum at that link for more.

Low cost ideas to reduce emissions in Cobourg: get rid of drive throughs, reduce/eliminate traffic lights,(4 way stops could replace them) and have public servants turn off their vehicles when they are idling while employees sit in them. This is the perfect time to eliminate the large empty buses driving nearly empty around town. Buy small passenger vans. Stop paramedics driving around the county empty trying to second guess where a call may come from. Either work from the hospital or perhaps a LTC where they could be doing constructive work rather then driving around.

Paramedics are pulled in all different locations based on distance and severity of call. They also have GPS. Doing what you suggest to save some nickles comes at the expense of response times and levels.

Why do the Cobourg police use such large vehicles?
in EU they use much smaller vehicles also should they be looking at EVs

I take issue that somehow the loss of important, well paying jobs in the local manufacturing sector is being touted as a win in the battle against climate change. I am also surprised to see that in a rural community, where Judy represents both the Town and County, that conservation of farm land and water stewardship did not form part of the Running Start list of priorities. Resilient housing and “neighbourhood watch” programs feels a little like scope creep and the “affordable/ energy net zero” housing is an oxymoron at this stage of the game. Interesting albeit grandiose objectives but feels a little misguided in places. There is no lack of environmental initiatives to work towards, within the climate change agenda but also outside of it.

Dear Rob,
Thank you for your comments. Because this climate action plan was for Cobourg and not the County, Port Hope and Hamilton Twp. which have significant agricultural lands unlike Cobourg which does not,
I did not include agricultural measures in Cobourg’s plan. There will be agricultural related measures in the plans of the other three local governments that I am also preparing. Agricultural land in Northumberland is losing 2 tonnes of CO2 per hectare per year which reduces soil fertility and increases our greenhouse gas emissions. Measures under consideration include: more cover cropping, increased pasturage, more grass fed beef, more commercial greenhouses and biodigesters for agricultural waste management and for fuel.

Aren’t you concerned about methane from bovine flatulence? This is supposedly far worse than CO2 (an essential nutrient for all plants).

“Methane is a potent greenhouse gas, as well as a precursor to ground-level ozone–a key component of smog. As a short-lived climate pollutant (SLCP), it has a shorter life-span in the atmosphere than CO2 and other long-lived GHGs, meaning that taking action to reduce methane emissions can have a beneficial climate impact in only a few years. Reducing methane can also help improve air quality” https://www.canada.ca/en/environment-climate-change/corporate/international-affairs/partnerships-organizations/global-methane-intiative.html

Congratulations to Judy Smith for an informative and positive update on such a critical subject.
Climate Change may not seem as urgent as other local issues, but what is more important for our children and grandchildren?
Congratulations to Cobourg’s leaders, residents and businesses for significantly bettering the Kyoto 2012 and 2016 Green House Gas reduction targets!
Naysayers and climate-deniers would have said ‘impossible and unaffordable’, as they do now.

One of several credible sources re. how the 2050 targets can be met and a thriving planet achieved is 93 year old David Attenborough, in the last 27 minutes of his Netflix video –
‘A Life on Our Planet’.

You’re citing as a source a climate denier group with dubious credentials and funding sources? Even the founder of GWPF, skeptic Nigel Lawson has now admitted humans are causing climate change. There is clear consensus among scientists about the causes of climate change and its impact on species extinction.

The issue is polar bear deaths and walrus deaths — and Attenborough got it wrong.
https://polarbearscience.com/2020/09/13/attenboroughs-new-attempt-to-scare-people-about-polar-bear-extinction-and-walrus-deaths/

warren, you’re never going to convince the naysayers and deniers. If they spent as much time trying to do just a little bit of something positive instead of searching and researching for loop holes and inconsistencies in other other’s reports, we (and our grand children) would be better off.

Fact checking. Not a loophole, but facts. Attenborough mouthed the text written by others, (for good money also) who deliberately mislead him.

Something really really positive is nuclear energy. We and our grand children will certainly be better off in that case.

Judy, Judy, Judy, who do think will pay for your grandiose ideas? Yes, the taxpayers of Northumberland County. If we all try to do our best, but we don’t need to go to Zero imitations. Here again we have again an environmentalist with his or her with their head stuck up their proverbial butt.

I don’t know if the transit buses have been ordered or not, but they definitely should be electric. Diesel has little place in people transport any more

How could we order new buses if we haven’t even heard what the super secret transit plan for Port Hope, Cobourg and Hamilton Township being negotiated between the Three Amigos is?

Why don’t we look at the much larger picture of Northumberland County…With all our green space plus farms producing vast quantities of corn and soybeans, our county carbon footprint is probably not present. Our county most likely absorbs more carbon that it creates…and I believe this is also true for the whole of Canada. Perhaps a knowledgeable scientist could confirm these facts. I don’t think we have a crisis in Cobourg and perhaps common sense should rule the day versus increasing the cost of living for most people to the point that they can’t afford it. Do we really want to live in a “police state” where we have more government paid employees checking our houses in the summer & winter for temperature control. Also, Our taxes are high enough in Cobourg without increasing the CIP program…

Plus all our efforts and good intentions won’t make a bit of difference while certain very large jurisdictions on the other side of the world continue to build massive coal-burning electrical generating stations all over the landscape.
Sorry.

“Perhaps a knowledgeable scientist could confirm these facts.“

“You might have heard that Canada’s forests are an immense carbon sink, sucking up all sorts of CO2 — more than we produce — so we don’t have to worry about our greenhouse gas emissions.”

“like most things that sound too good to be true, this one is false.”

Actually, we are losing CO2 from our agricultural soils in Northumberland County at a rate of 2 tonnes per hectare per year according to Agriculture Canada Report #4 Environmental Sustainability of Canadian Agriculture 2016

I wish I understood that. Is CO2 leaching from the soil into the atmosphere? And how would that reduce soil fertility in any case?
Some bizarre phenomenon here I have never encountered?

What type of fuel will. be used in the new buses? Why are we not considering micro transit as part of our fleet? Did Public Works consider her report before ordering the new buses?

There was probably a time limit on the “free” money so they rushed to make another wrong decision.

Left hand meet right hand. A classic example of a wasted study when Council ignores its basic recommendations and, in fact, didn’t raise a question about the glaring inconsistency.

I don’t think the decision has been made yet. The shuttle-sized buses may start out as hybrid vehicles moving to electric when it is affordable and when there is a good selection to chose from.

Hydrogen is also worthy of consideration. How much more is electric over diesel?