On Sunday afternoon in front of Victoria Hall,  Greenwood Coalition held a “community-led vigil for loved ones lost to overdose”. They called it “They Were Here”.  Led by David Sheffield, a steady stream of people spoke of their experiences – there was a lot of emotion and passion.  When I was there around 2:20 pm, there were about 35 people; some spoke and others were simply supportive.  Attendees were invited to “create and hang a flag of hope to commemorate a loved one who has died”. (See photos below).  Apart from talking about their personal experiences, some also spoke of the misunderstanding that the public seems to have.  Councillor Adam Bureau initiated Council’s actions on the opioid crisis and he was there but there were no other politicians – at least not while I was there.

The “vigil” was subdued and did not seem to attract any opposition (nor should it) but I was a little surprised at the lack of a Police presence – although it was not needed.

The event may not have got much advance publicity; a Media Advisory was issued – but that’s the only way I knew about it.

Here is their description of the event.

As we continue to lose members of our community at an alarming rate, family, friends and neighbours will gather together in an act of unity to remember lives lived and lost. They Were Here will be a community-led vigil, providing a safe space for people to grieve, honour and celebrate loved ones lost to overdose while offering hope and community to those living with addiction.

Attendees will be invited to create and hang a flag of hope to commemorate a loved one who has died. There will also be an opportunity for people to speak their loved one’s name and share a memory or message.

There is no word yet on the re-scheduling of the Town “summit” on the issue of opioid addiction.  I wonder if it will get lost in the issues of homelessness and low cost housing which many seem to think are related.

Here are some photos of the event. 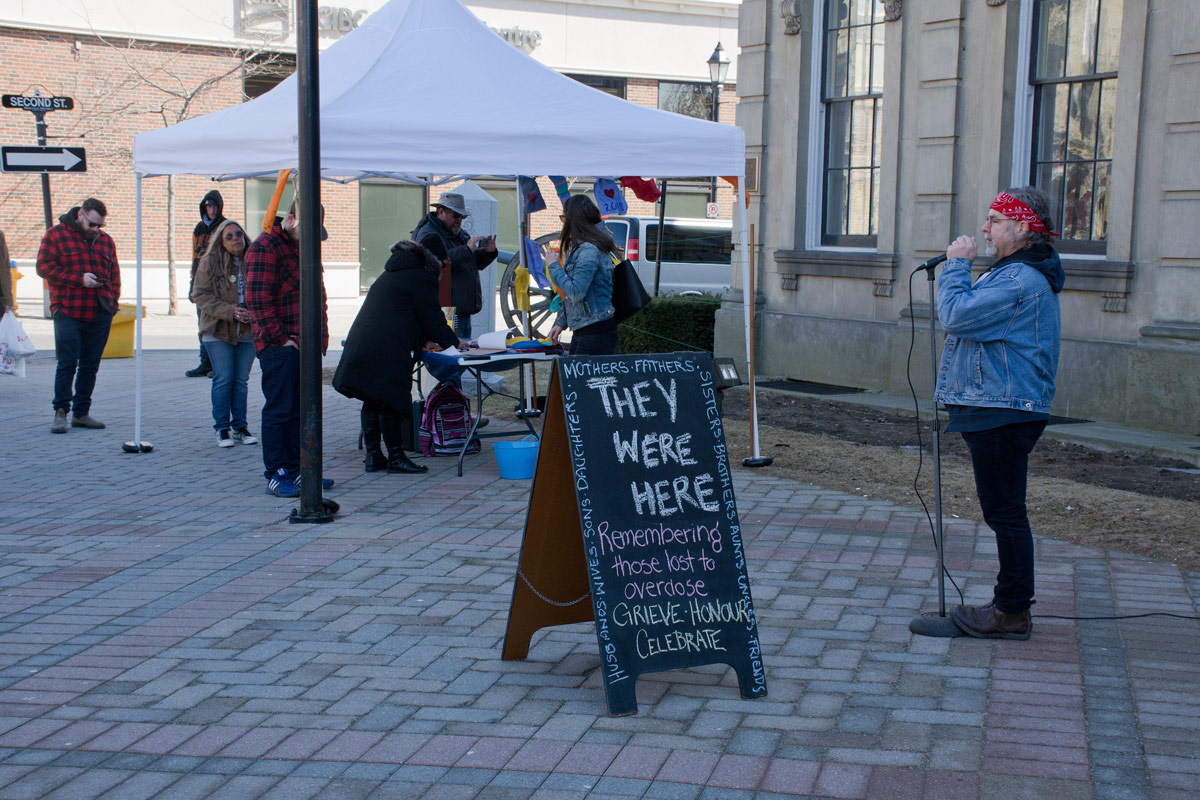 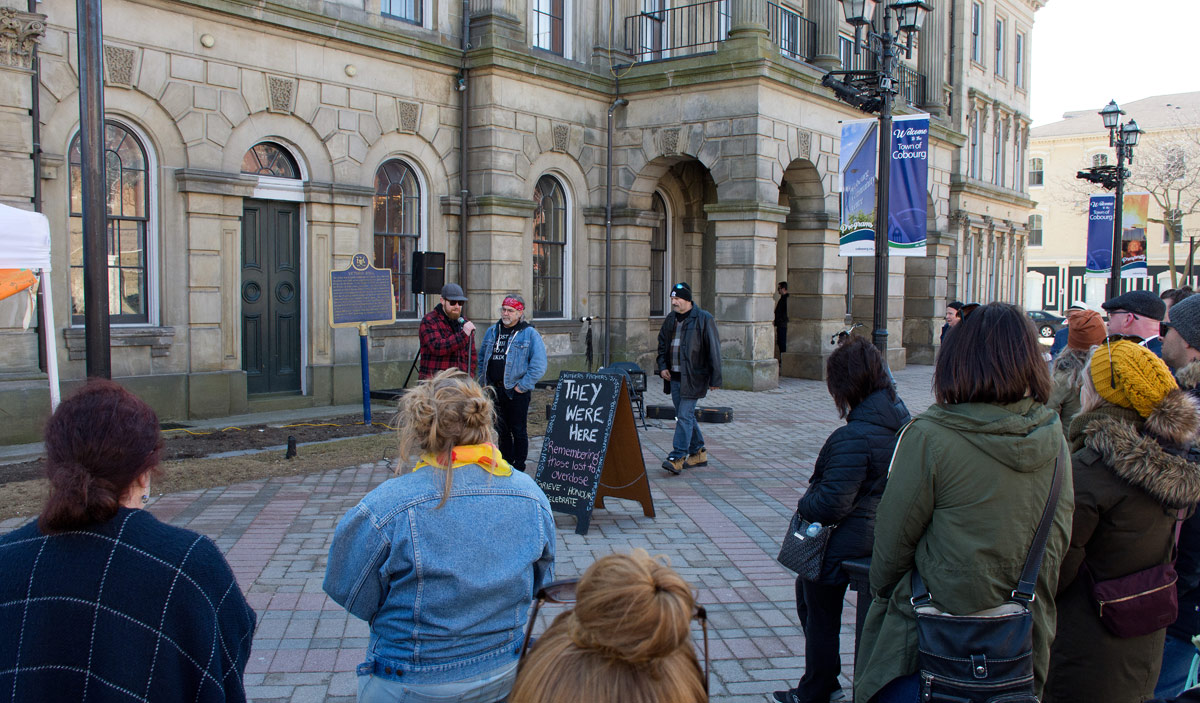 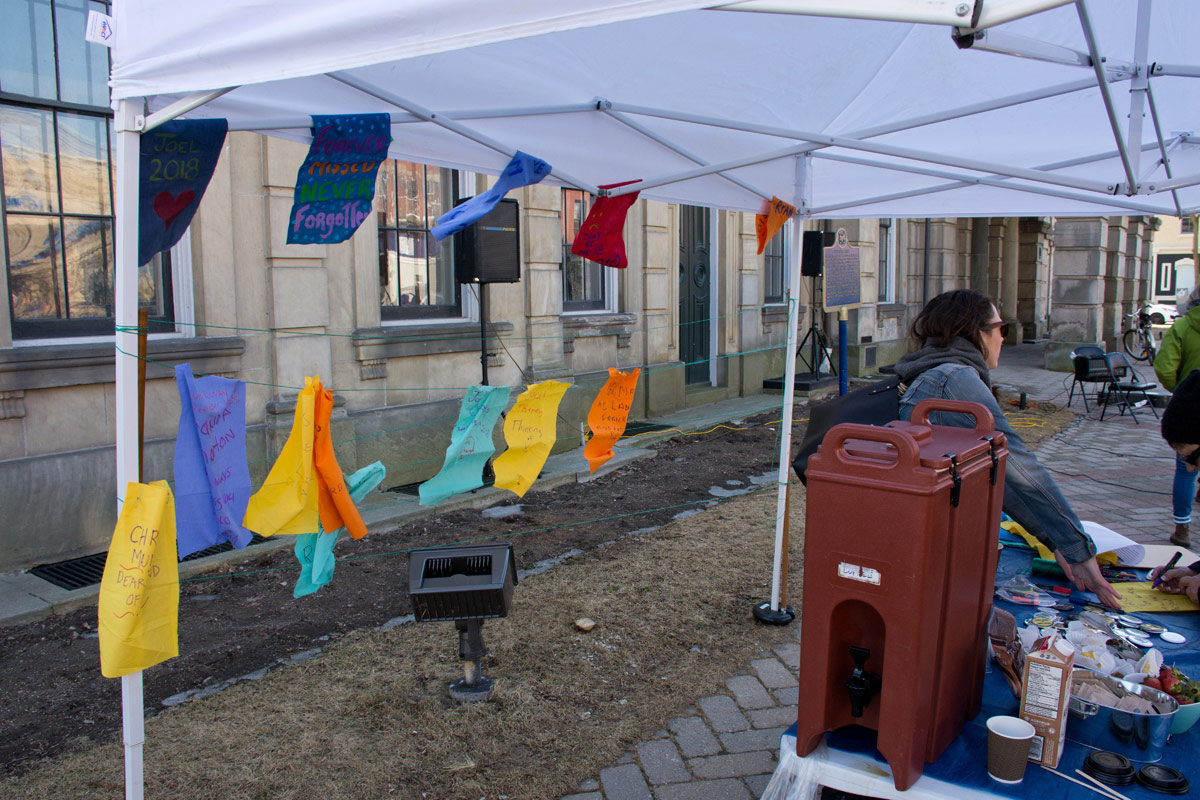 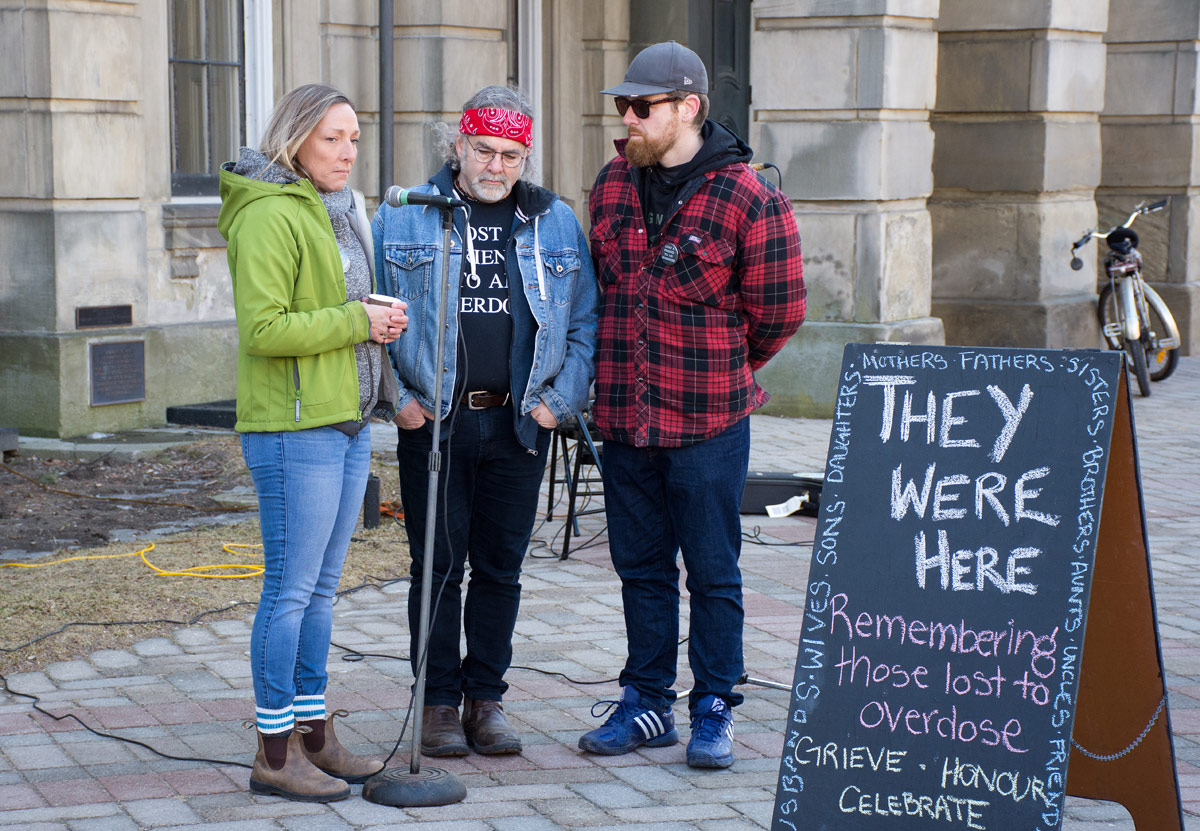 Hi John,
Thank you for this important coverage. I was there standing next to Adam the entire time. I say this not for attention but to let citizens know that Council was represented. I was there first as a citizen to honour the memory of a friend who died from an overdose a few weeks ago.
Thank you,
Nicole Beatty

Sorry I missed you Nicole.

I would like to thank councillor Beatty for being there. It was an emotional ceremony. Thank you for being supportive and for your empathy. You were my Rock that day.

`Same here – Observer I know of lots of situation s and people that have all survived some sort of injury and accident
were on some sort of heavy duty pain meds mostly Oxy and Morphine and they were all drinkers as well but never to excess — they all came through
with out an addiction I noticed 1 thing the people I knew were all strong willed , determined people with a purpose ,job / career , family they could not wait to get back to an active life in general That is not the case or age bracket of the people I am seeing on our streets or coming and going at the methadone clinics & Rehabs around here or Port Hope.

“American psychologist, Dr Bruce Alexander’s experiments, in the 1970s, have come to be called the “Rat Park…when rats were placed in a cage, all alone, with no other community of rats, and offered two water bottles—one filled with water and the other with heroin or cocaine—the rats would repetitively drink from the drug-laced bottles until they all overdosed and died.”

“…he put rats in “rat parks,” where they were among others and free to roam and play, to socialize and to have sex. And they were given the same access to the same two types of drug laced bottles. When inhabiting a “rat park,” they remarkably preferred the plain water. Even when they did imbibe from the drug-filled bottle, they did so intermittently, not obsessively, and never overdosed. A social community beat the power of drugs…”

Surprised there are no profiles of the people who have died.

I recall a close relative who underwent two hip replacement surgeries in the 90s. They were able to be admitted to a rehab facility that offered physio therapy. They recovered without heavy duty addictive prescriptions. Flash forward to 2016 – a neighbour had hip replacement, single. Each week they drank a Texas Mickey, they were prescribed Fentanyl for pain management. Some time later he claimed he was robbed of his prescription, went to the doctor and screamed in her face for a repeat. Another fellow with a history of alcohol abuse, now sober examined his pain prescription, noted it was an oxycontin derivative and returned it to the pharmacy. His doctor knew of his past. I feel very badly for people trapped by receiving addictive prescriptions when in years past something less addictive was usually prescribed. Always review your prescriptions!

Observer pain killers are not for fun. It is prescribed for pain.

Jimmy mentioned the instinct from ratos! Once life is meaningless people reach out for something else. Where does it start?

When people reject others for their colour, accent or gender, or because they were not born in this town, when they are belittled, all of you laugh, but bullying hurts. It is verbally inflicting pain to others. First it reaches the emotional, next the body. This is more serious than people think. Next topic after your cab ride on your way to the coffee shop with your cops. But if you want to know more from a medical point of view speak to professionals, a gp. You may learn something about blame and pain.

If you are informed, bullying is criminal, not “dribble”.The origin of bullying legislation comes from Virginia, USA, after the crimes committed from the Ku Klux Klan, or the KKK. This religious cult or supremacist hate gang, were found guilty of murder, theft, damaging property, rape, torture, mental torture, property scam, hijacking and so much more. This recent legislation came to reach us as well. It could apply to an individual, or children, a church group (parish), board members, acting as a hate gang against an individual in your community. Yes, and it happens more than you suspect. People are easily amused about it, they get comfortable in their common subject displaying hate, they play games and hurt others as they enjoy the trip of power. Be kind to those who seem different than yourselves. Don’t judge them, you dont know what they lived. Now Transient house deserves a healing place elsewhere, with appropriate treatment, and special care, not extra policing in a quiet neigbourhood according to Kingston Mental unit and Head Department. We are doing the wrong thing. “It is wrong for both of us” they added. We are mistaken to bring them among us. Psychatric experts should be trusted to advise us.

Yes Johanne – I realize pain killers are not for fun but pain. Two close relatives – one in the midst of life diagnosed with pancreatic cancer – given 3-6 months, totally terminal, the cancer all the way through her. She was prescribed morphine to ease her end as with another close relative – recurrent cancer – no hope – ditto with morphine. However many people have been prescribed recently very heavy drugs and they do not have life threatening illness just like another close relative that had two hip replacements – one quite severe. Less heavy, addictive pain killer script then recovery in a medical setting from the hip replacement that offered physio and other benefits to aid recovery without coming out of it with a drug addiciton.

SO GENERALLY SPEAKING (which was my point, yes my point) your answer is to blame all practitioners now. If I understand you well, you’re blaming the system. Or it’s everybody’s fault, you’re always right (always recollecting something personal). Seriously, you don’t sound like a pain management specialist. Dr. Observer you have a pager? Blaming others without solution is useless. Back biting is the illness called mediocrity of small towns. But it’s also the freedom to speak and denounce who is your enemy. I like the little 🐀 they love it to death !

Johanne – Say What? I have offered solutions. In my life I have had much experience and knowledge of people dealing with addictions. I will not parade their circumstances here for you to insult.