The short answer is “Not much”. I called the Mall Leasing VP and all I got was “No we’re not planning any residential”.  If you look at what they say online, you’ll see that Michael’s is coming soon, that another “pad” is planned next to the LCBO and that there are a lot of vacancies.  Before the pandemic, Rainbow cinema was planning an expansion but right now they are working on reduced hours with two shows on 4 days, one matinee on Sundays and closed Mondays and Wednesdays.  Although many spaces are empty (but not all), some others are getting renovated (see photos below).  It’s not clear where Michael’s is going: Trinity’s map shows them on the East side of Dollarama but it looks like a smaller space on the West side of Giant Tiger has been prepared – although this was done over a year ago.  Maybe for another tenant?

So far the leasing manager (Trinity-Group) has focused on outdoor big box stores plus the pad that includes Starbucks.  Plans include a second pad across the entrance driveway from Boston Pizza – see map below – although there is no progress on that.  Perhaps it’s delayed because a different landlord is currently building one north of Staples.  See photo below plus post “New Plaza at 1025 Elgin ” in resources below.

The mall property manager says on their web site:

Plans are currently in development to reinvigorate the interior retail mix with the goal to re-establish Northumberland Mall as the heart of the community in Cobourg. Opportunities exist across various unit sizes!

Sounds good but all we’ve seen is an exodus.  Will tenants come back?  One has already, Northshore Lanes in the lower level is now open for 5 pin bowling. Planned hours: 12 to 10 pm Monday to Saturday and 12 to 8 pm on Sunday.

And (hot off the press) Rainbow has signed a renewal of their lease for three years – so they plan to stay!

Here is the current map.

And here are some photos taken on a rainy afternoon 11 November 2022. 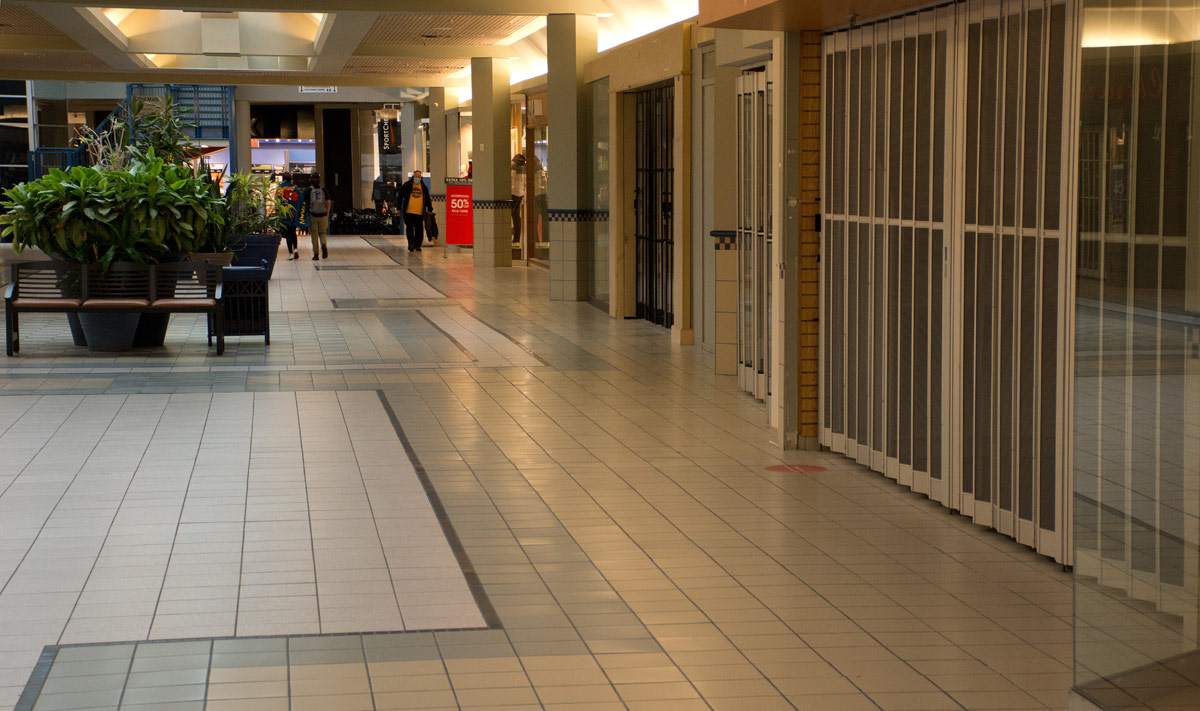 Many spaces are empty 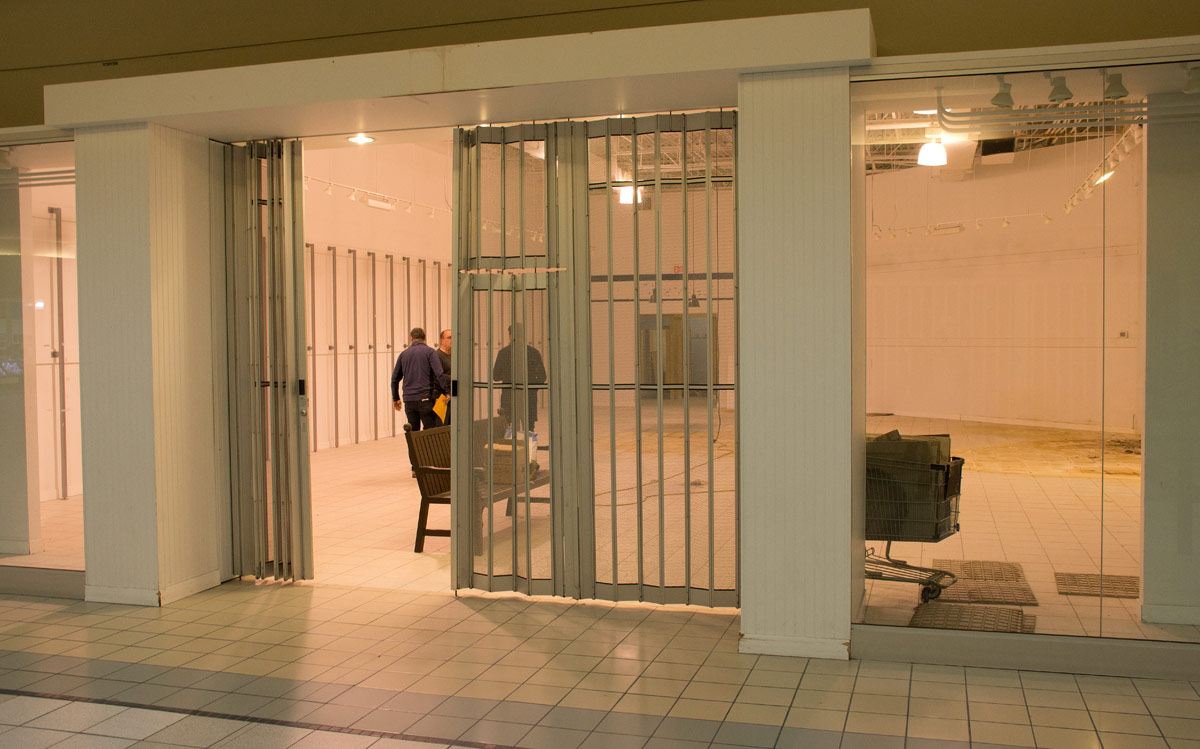 Some Mall spaces are getting renovated 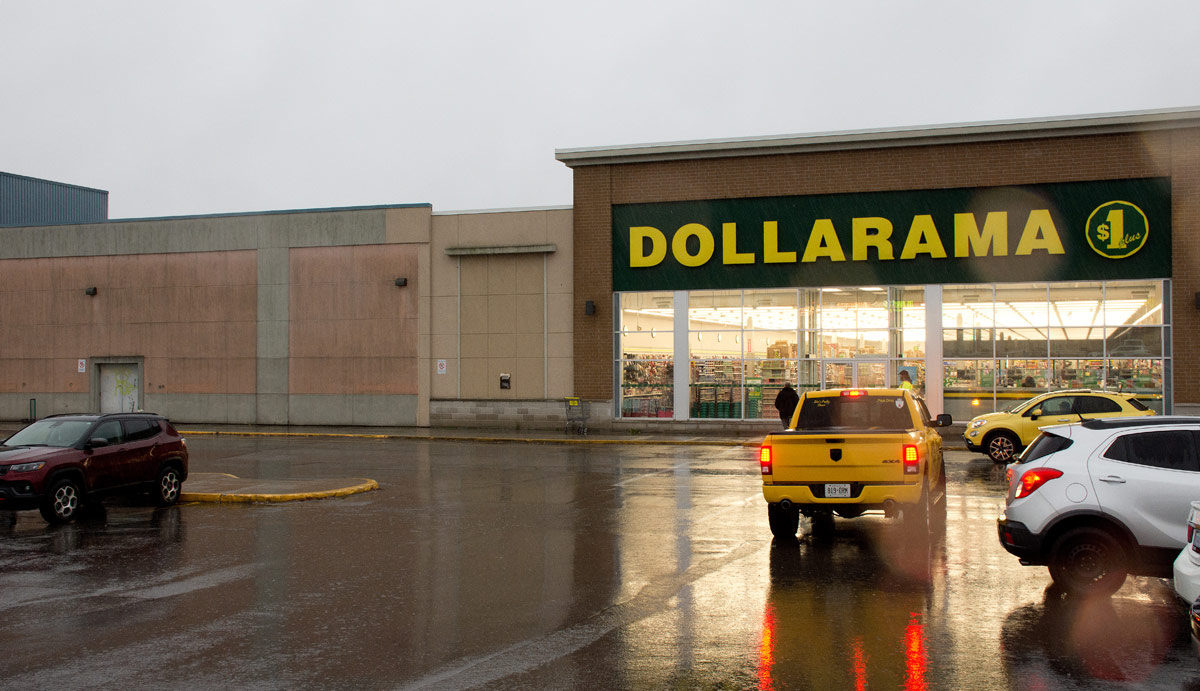 Michael's to go at left of Dollarama? 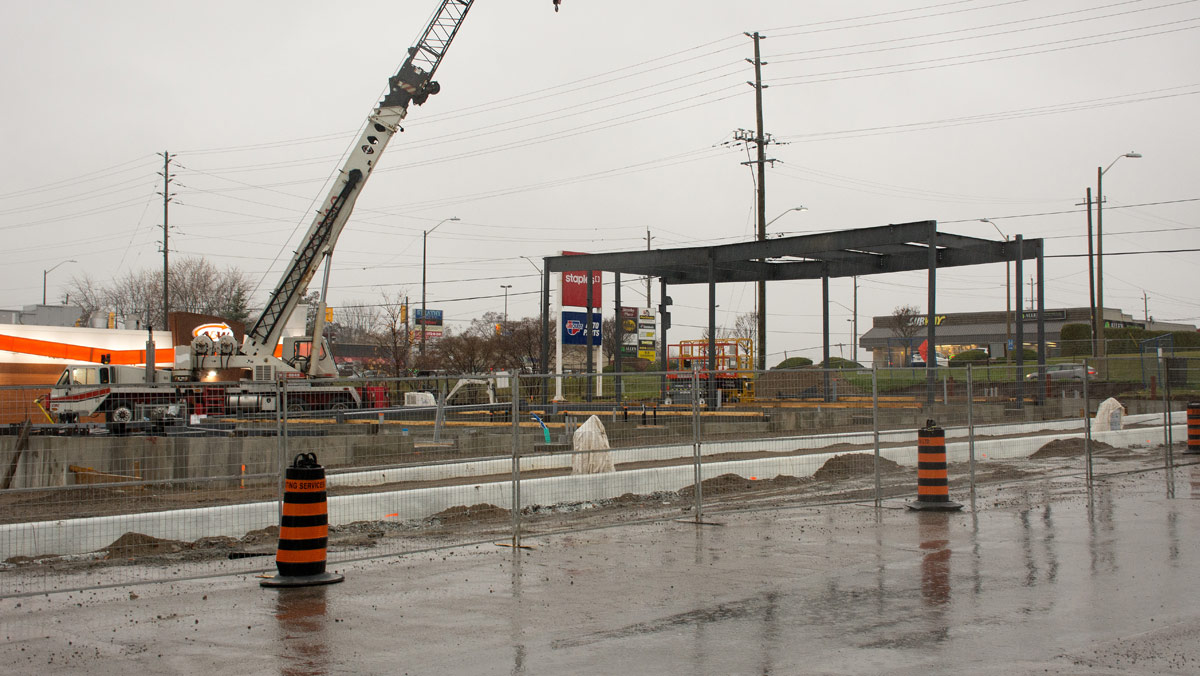 The posts prior to this one confirm my proven conviction that humans (including you and I) have to create a major disaster before we start planning how to prevent it from happening in the first place.

The disaster we’re headed for is climate change which we in Canada are contributing to by our excessive use of the private automobile.

Advocating shopping in Peterborough, Oshawa or Bellville because they offer more choice and are only “a short drive away”? I rest my case!

Cobourg is half the population of an average Toronto neighbourhood and covers twice the area. As Mrs J points out it’s called SPRAWL.

What’s needed is intensification which among other benefits supports a Business Development Plan that covers the whole town, results in businesses being concentrated along roads that would one day be the primary routes for a frequent, accessible and affordable transit system.

I suggest we start supporting, debating and planning how to avoid the climate disaster we are headed for now, instead of after it happens!

A big challenge? You bet … since cheap, convenience and comfort drive most of our decisions.

Mr Oliver claimed, “cheap, convenience and comfort drive most of our decisions“

So you recommend expensive, inconvenience and discomfort? This is what Europe is beginning to experience because of an ‘energy crisis’, otherwise known as an energy shortage.

We need more emissions-free, small footprint and the base reliability of nuclear energy to power our services, including private automobiles.

Private automobiles save hundreds of thousands of lives by allowing individuals and families to escape disaster zones, be it hurricanes, floods, forest fires.

I hope you aren’t accusing me of “advocating” shopping out of town. I just pointed out that that appears to be what is happening as a result of the geography of the area. Not “advocating” anything here.

Don’t be too quick with the sneering accusations, Keith.

Upon seeing that the Northumberland Mall (which I personally loved years ago, when it actually had great stores AND a food-court) is going to “try” to resurrect life back into itself, as well as noticing all of the stores and takeout food pads located in the nearby parking lot, I feel that the DBIA need to give their heads a shake out of the sand!
Cobourg is SPRAWLING folks! It’s not just a mere walk a few blocks to King Street!
Perhaps the “D” of DBIA should be re-vamped?
Wondering……

I don’t understand your point. The DBIA exists to serve its own literal “area”. What the mall does is outside their mandate. To include the whole town in a larger BIA would muddle it down and defeat the purpose of having one to begin with. A BIA is setup to a promote cohesive zone, so to speak. Larger centre’s often have multiple BIA’s each tasked to their own unique set of circumstances (geographical, cultural, whatever).

“To include the whole town in a larger BIA”.
I believe we call that an “Economic Development Office?
Something that has struggled in its own right

It sounds like they’re trying to come up with a plan and that’s excellent news about the movie theatre. Retail malls have been on a downward spiral for years in North America and ours now has that musty and dusty smell of vacancy. I hope they can attract some retailers and turn it around – it would also help if Metro opened its mall entrance again.

Vacancies, yes, but still clean and well-maintained. I was there yesterday and the place is still attractive and not the least bit “dusty” or “musty”. Give credit where credit is due.

As peoples’ shopping taste and styles change so does the means to meet those needs.
The Mall replaced a the ” downtown” experience thru the 60’s to the 90’s.
The internet and Amazon came along and were the Mall slayers.
With that came BiG BOX stores. Now consumers go to stores to touch and try. Then return home to order online to get the cheapest price.
If you need something cheap and ASAP then you buy from walmart or GT Boutique. If u need something in bulk asap u buy from Costco.
Otherwise it is online…
Those of u who pine for the good old days of the 80’s mall are the same who binge watch John Hughes and Molly Ringwald movies.

Shopping on line – that slim model sure looked good in them – perhaps they delude themselves they also look good. Sure take your money to another centre that offers indoor shopping which was offered here until some citizens of Cobourg decided not to support their own community whether it be downtown or the Mall. All the new housing – people sure want to live here but supporting their community seems to be another matter.

Hope the apathy of thought will rechannel to invest in your community to ensure Cobourg is able to offer a bright and vibrant place to live.

From the web site “….goal to re-establish Northumberland Mall as the heart of the community in Cobourg.” Seems that the DBIA, Council are at odds with this rather fundamental objective statement from the Mall ownership. Just sayin.

I miss the mall the way it used to be. It seemed to go downhill when they took the food court away. Glad the bowling alley is back.

I agree with Lois. For some reason the then owners drove the eateries away including the Chinese one on the main level, ending their lease prematurely.. To keep Boston Pizza happy? Certainly to keep one of their tenants happy, I think.

No wonder residents will continue to shop out of town. There’s a lot of apathy to go around.

Or Oshawa Mall
All indoors out of the wind ,rain & Snow

Lots of choices for Cobourg shoppers at Oshawa, Peterborough or Belleville, just a short drive away, so that Costco, Ikea and such have no incentive to make a big investment here in Cobourg. It would just draw business away from their other stores nearby with little net gain in sales overall.

Such is our fate here, it would seem, based on our location.

Jim T you get it. The areas population and age and economic demographics will only support certain stores and who they cater to. Thats why we have. GT boutique and not a Hudson Bay, why we have Walmart and not Costco.

Doesn’t say much for a Town and Planning Dept bent and determined to build a Town thats walkable . This Clearly shows vehicles are here to stay and will be needed to shop store to store now .

It used to be quite convenient to take the bus to Walmart, then over to the Mall an hour later, then home an hour after that.

Now it all has to be scheduled and reserved and coordinated with precise timing while shopping with one eye on the clock.

I think I prefer the old way.

Cobourg is the regional hub , not everyone lives downtown
people need to drive to shop, can’t get everything online 😁
There is not many stores I can afford to shop at downtown

Try coming out of Marks, facing south and then try making a left turn to go over to Rogers Road!
The view is blocked as one tries to see the traffic coming, from the east, into CTC from Rogers Road!
These ‘charging stations’ should have been placed somewhere in the Mall parking lot! Just my opinion.

Makes sense. Right turns are easier and safer than left turns against traffic.