An announcement today by the “Downtown Vitalization Action Team” was made in front of the Vitalization communication billboard on Division Street just south of King.  The intent was to provide an update on progress being made on a project that first started in the summer of 2013.  Although a number of detailed changes have been made, the Downtown is still visibly in need of vitalization.  Henley Arcade is better, some storefronts look better but there are still empty stores and buildings.  While this is a common problem in other small towns, the money spent to date on this project has made only incremental improvements..  Any differences this year seem to come from the CIP (which arguably did not come out of the Vitalization work), improved DBIA events and the Art in Windows project.

Most of the updates were given by Economic Development Officer Wendy Gibson and all items on the billboard were deemed complete – except for ongoing communications.

Mayor Gil Brocanier remarked that the work has made a difference – “there are more people downtown”.

The list below provides the status of the 11 projects that the Downtown Coalition views as being part of the Vitalization Project.  A status report was provided by the Town but the comments below in blue are mine and not always in agreement with the Town’s version.

Each project was marked as complete on the billboard with a large check mark.  Subject to approval from the landlord, the billboard will remain in place for a month or so then the space could be used for further updates.

Although there are some noticeable improvements, they are happening slowly – this project really is still a work in progress.  One problem is that there are as many opinions on what to do as there are people.  Let’s hope that the Downtown Coalition can make some better progress in the next 12 months – having a means of measuring success should help.

Below are some photos of the event.  Present were Mayor Gil Brocanier, Councillor Brian Darling, members of the Downtown Coalition with chair Carol McCann together with staff Wendy Gibson, Alison Torrie Lapaire, Ashley Purdy, Teresa Behan and Dean Hustwick.  No members of the general public came to the event. 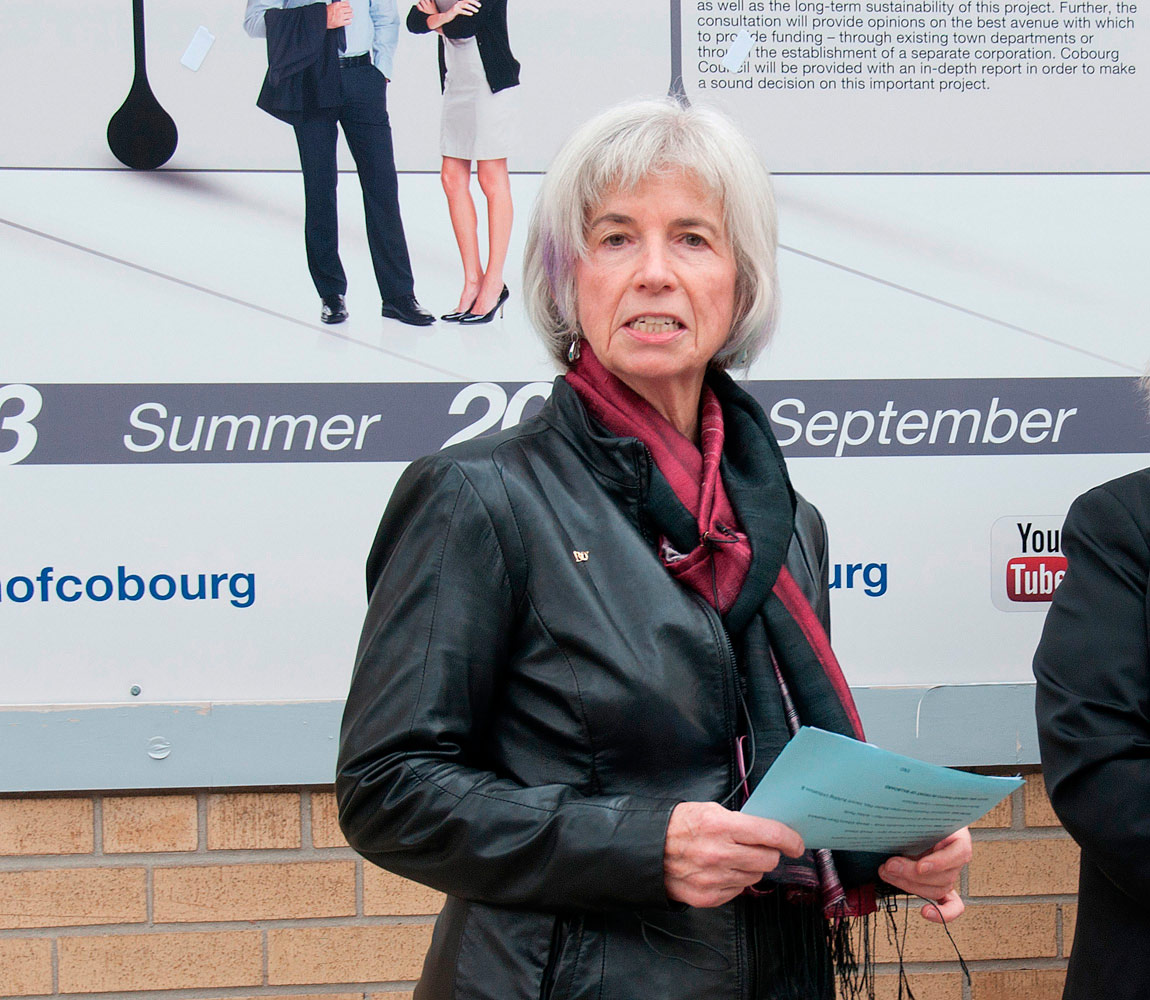 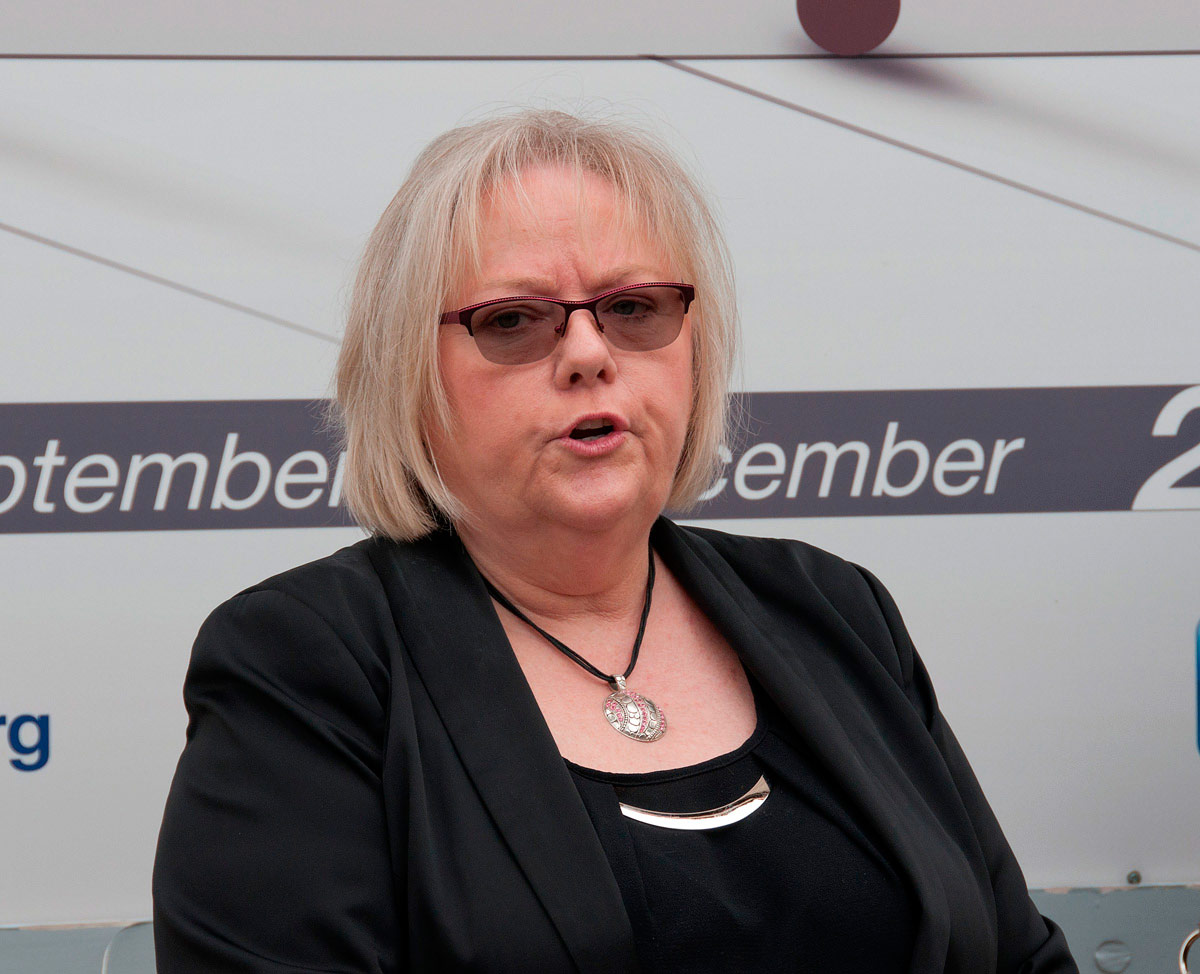 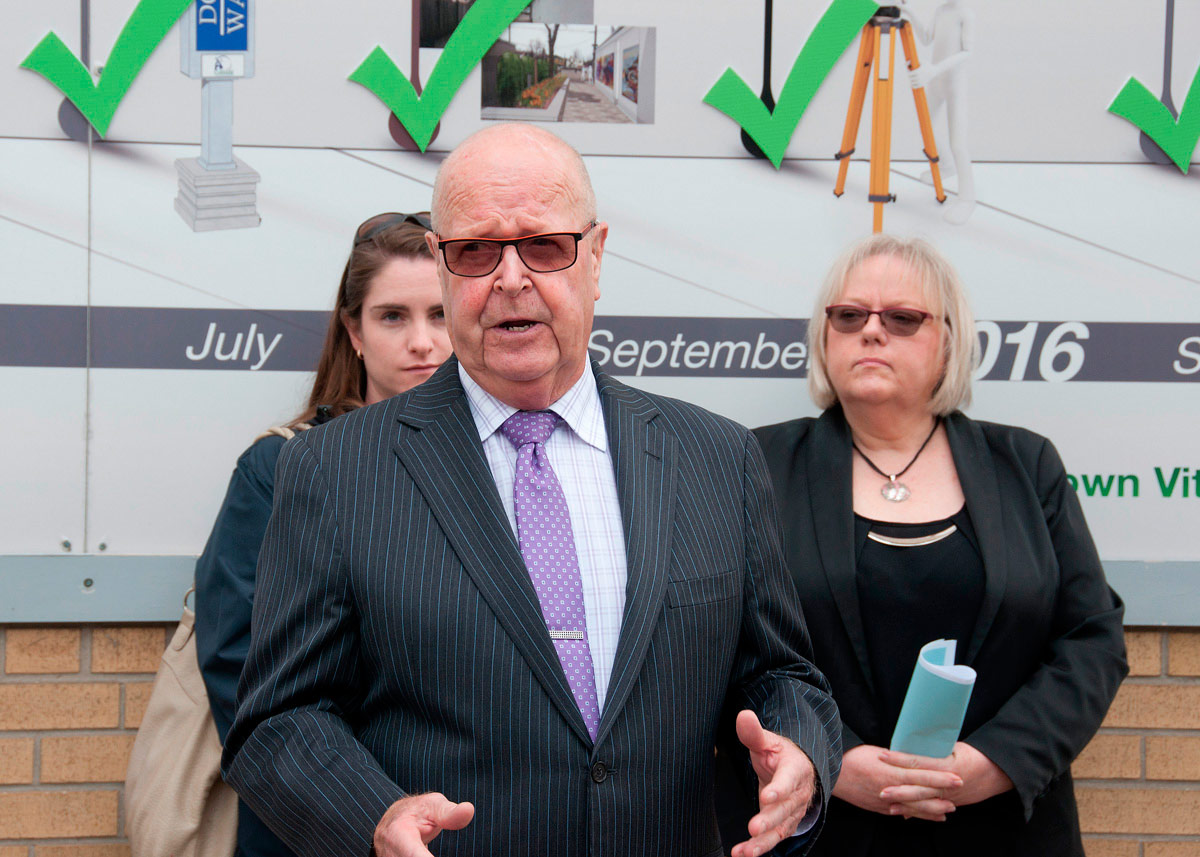 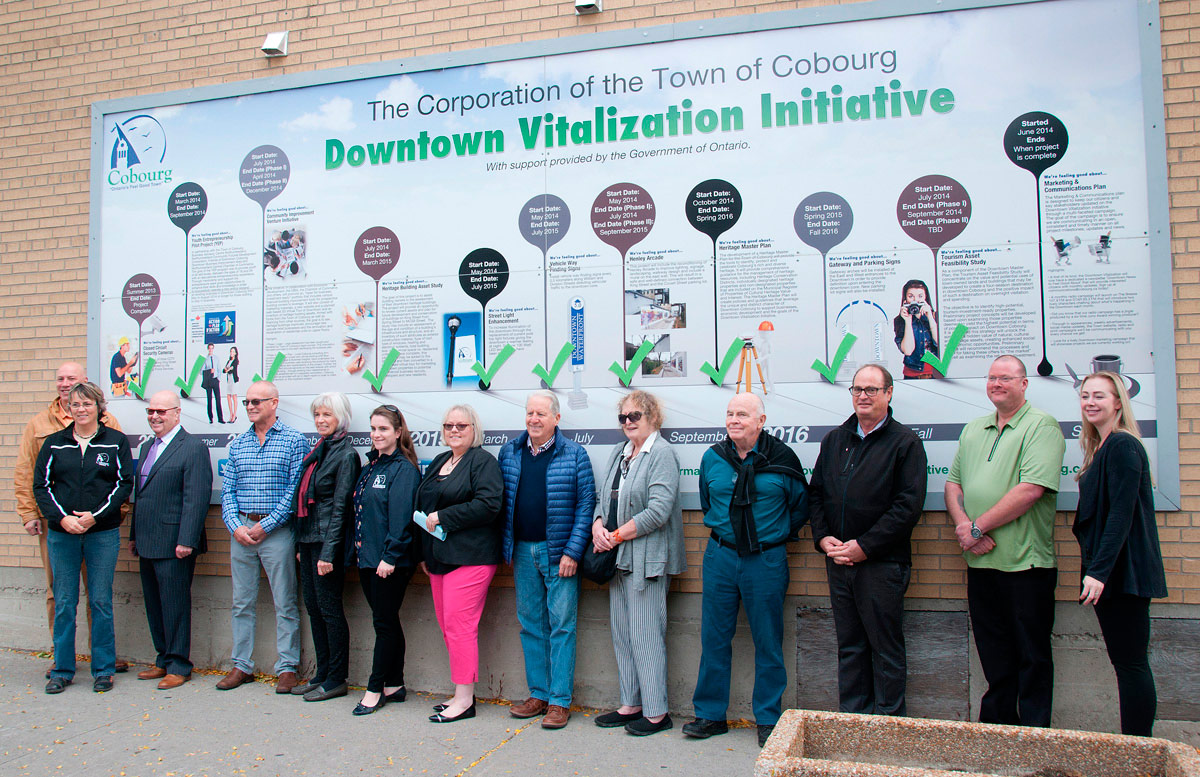 I don’t see any thing thats really New or Different being put forth by this Vitalization Team In my 50 plus yrs. of living in Cobourg its pretty much the Same old same old stuff Programs and Grants like CIPI have been offered in the past to Shop owners for improvements and New Business
but if we don’t have what the easy parking and what Buying Public Wants there is no need to shop there . Lets face it this is and was a seasonal and Summer Vacation
Town with 4 or 5 Bars and old Hotels on its main st Thats when it was alive .

I agree that Cobourg is “a seasonal and Summer Vacation Town” but it is also a “food desert” where visitors can’t find fresh groceries downtown. It’s either restaurant food or hot dogs and fries from a concession stand. A while back a young couple asked me at the corner of Division and King – the very heart of downtown – where they could buy stuff to make a picnic lunch and I couldn’t think of any at all. Are we in the vacation hospitality business or aren’t we?

What i think the plan is missing out on is that we need more people living downtown to make the downtown more “vital”. There are so many vacant/derelict apartments above the store fronts that could provide much needed housing (our vacancy rate is 0.5%) and would provide more people-traffic and potential customers in the downtown core.

Now if the Town of Cobourg could only help the people driving along King St. to “Visualize” the (stick-out) sidewalk curbs that reduce the roadway to one single lane with some Reflective Paint on the curb so that these obstructions can be seen at night and even more so when it is raining or during other poor visibility situations.

Yes, and make those “stick-out sidewalk curbs” about a foot narrower so that bicyclists, myself included, don’t have to swerve out into the automobile traffic lanes every time we come to them. Those ill-considered obstacles are a tragedy just waiting to happen.

No real discernable impact. Much ado about ‘nothing’ or very little.

Hu ! 7 years and Counting
How many of Cobourg ‘s finest does it take to screw in 6 light bulbs .
Ridiculous to think this is considered as progress

There was one member of the public there – me. I went along to see what was happening and ended up in the lineup – totally undeserved.