Deborah O’Connor of the Northumberland Coalition Against Poverty organized a rally outside the office of MP David Piccini today to protest changes by the Doug Ford government.  The newly elected Provincial government recently announced that after 100 days of consultation, it will come up with a strategy to break the cycle of poverty and get people working.  A first step is that the Wynn government’s plan to increase social assistance rates by 3% in September will be cut to 1.5%  and the 4000 participants on the basic income pilot project will revert to the same welfare arrangements as everyone else.  But Deborah supports the Ontario Coalition Against Poverty which says that even the 3% was “woefully inadequate” and below the rate of inflation, that canceling the pilot a year after it was underway “demonstrates a reckless disregard for the lives of nearly 4000 people on the pilot who planned their lives on the assurance of having a set income for 3 years” and the “sweeping changes to social assistance that are being ominously hinted at are likely to be the same brand of ruthless right-wing reforms we saw under Mike Harris.”

Also participating in the rally is the recently formed Northumberland Coalition for Social Justice.

There were about 25 people at the rally when I got there around 4:00pm – most people had signs but it was quite peaceful.  At right is a photo of what it looked like and below are photos of the organizers – the indefatigable Deborah O’Connor of the Northumberland Coalition Against Poverty and co-founders of the Northumberland Coalition for Social Justice Derek Blackadder and Kim MacArther Jackson.  Another recognizable face was Linda Mackenzie-Nicholas.  The media were there but no police although they were not needed.

MPP David Piccini would not be attending the protest but will meet with them a week later [Deb said she will meet him at 3:00 pm next Friday].  He said that “the Liberal’s approach wasn’t working and there are about 1-million people on Ontario Works and the Ontario Disability Support Program,” and that “Of those receiving support, 70% go back onto those financial assistance programs eventually, and 90% of that number within a year. That tells me the system isn’t working. There is a systemic problem and a culture of dependency, and the new plan will work to get people ‘truly back to work’ while supporting those that truly need it. We’re going to get it right.”

Organizers of the Rally 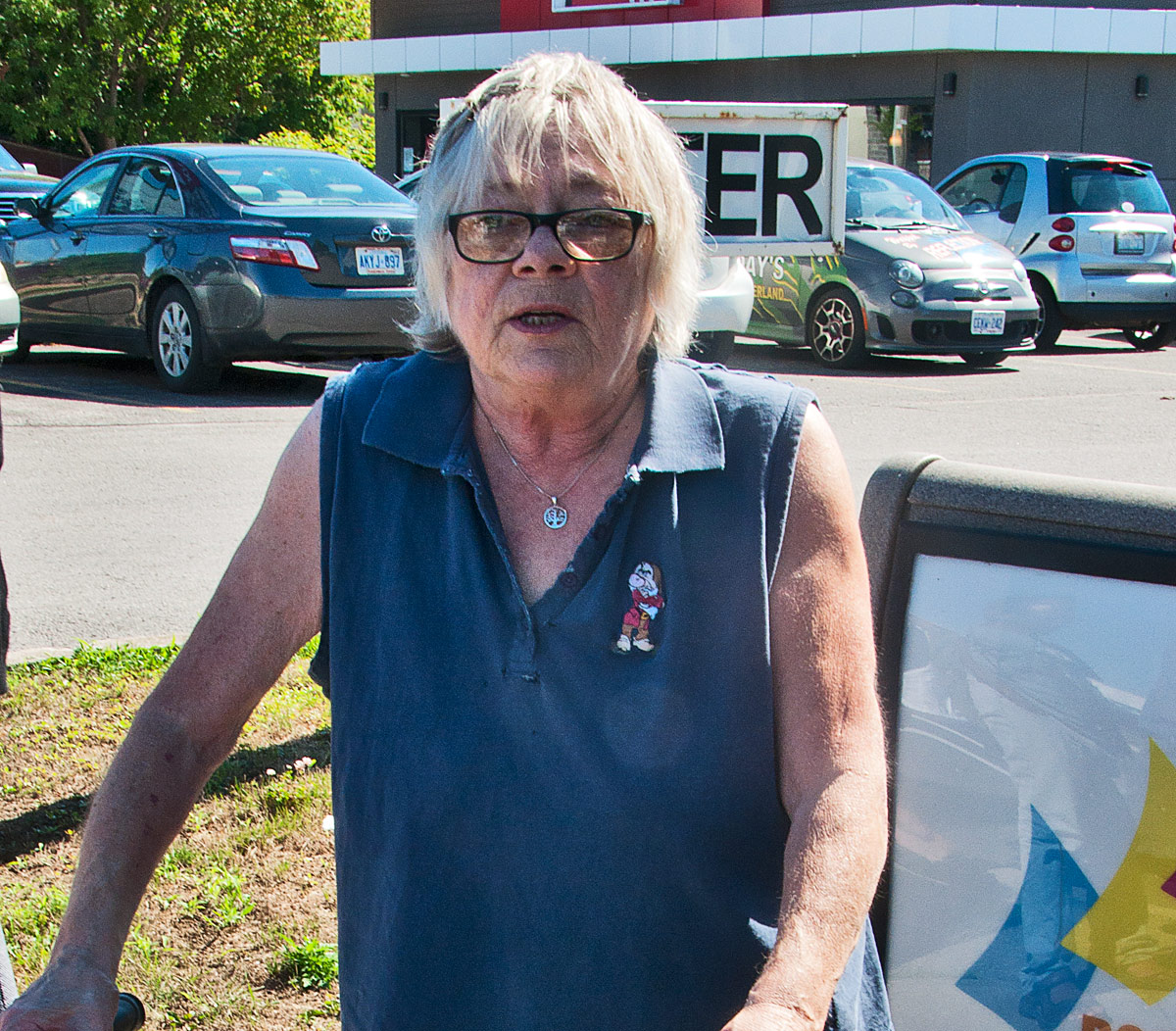 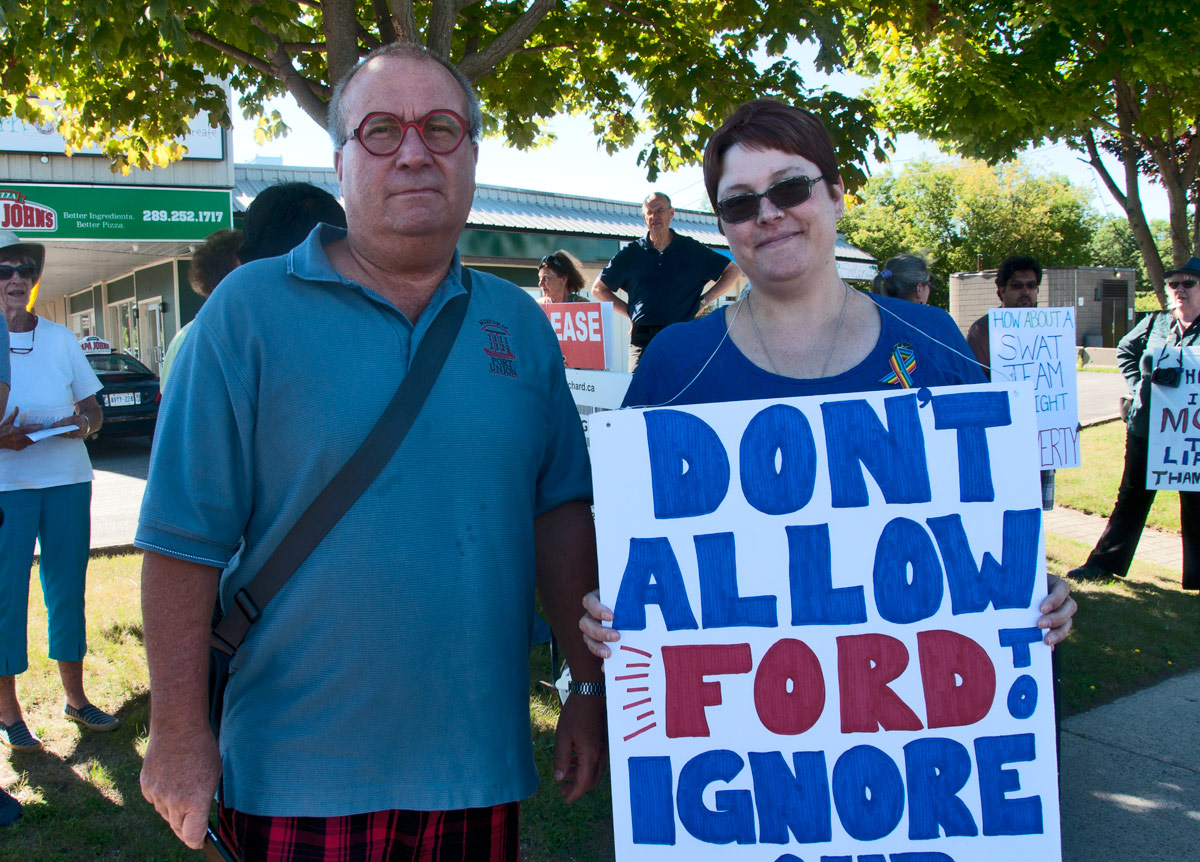 First of all.. let’s get the level of government correct. David is our MPP, not MP.
Second – let’s at least wait and see what the newly elected government comes up with before racing to Piccini’s office with pitchforks.
Let’s also not forget why Ford was elected with a majority government – most of Ontario was fed up with the Provincial Liberals… so perhaps before protesting at Piccini’s office – figure out the many, many reasons why the liberals were voted out of office and work on fixing those issues.

As much as I would be interested in hearing what Deborah and Derek have to say… can’t stand listening to Dave Glover… I would rather listen to nails on a blackboard!
Anyway you can provide the content of the interview?

Like most details of social assistance law and policies, these issues can’t be described in one paragraph in the comment section of a blog. Not even two! You’ll have to steel your sensitive ears and spend an hour of your life listening to the show, where we have a lot of ground to cover. I’ll be talking about the changes to social assistance and Derek will be speaking about the work of starting a brand new advocacy group, the Northumberland Coalition for Social Justice.

You can view our developing facebook page called:
http://www.facebook.com/NCfSJ

If everyone is on “the basic income”, just who/what is supposed to fund the program??? How stupid can some people get! Get educated/learn a trade/get out and get a job/and become a credit to your country.

Not everyone is a supporter of Basic Income, at least the version that was piloted in Ontario. Cornbread has zeroed in on one bg reason I and others are opposed – because it shifts the costs
of providing a living income off employers and onto the taxpayer. With Basic Income there will be no pressure on employers to ever increase wages, absolutely none. That is exactly why so many right wing supporters love the idea!

That does not mean, though, that we approve of how this government has dumped the 4,000 particpants down the drain with no indication of how much longer the program will run, or what will happen to them when it does end. That callous, mean-spirited move serves no one well, and low income earners in Ontario are terrified of what will come next.

Read the article in today’s Toronto Sun, about “James Collura”, the “poster child” for the basic income…
He gave up a good job, because he didn’t like it, and now works “for Free”, while collecting his Gov’t check.

More on James Collura – from a less biased source than The Sun – here:
http://lindsayadvocate.ca/hamilton-man-uses-basic-income-floor-to-stay-active-in-community/

“I’ve come back to try and make a positive difference in my community – and this time I’m not alone. My wife and I created The Lindsay Advocate to be media with a social purpose, to advocate for people over corporations, to push for a fair society where all citizens can reach their full potential.”
Roderick Benns, Publisher
A community newspaper, light-years removed from the tabloid Sun, and something we could well use in Northumberland.

oh yes, the Lindsay Advocate has a different spin cycle than the Sun, but both launder news.

I thought I was reading the Onion.

“Rather than “getting people back on track” the changes proposed by the Conservatives will entrench people in deeper poverty.
If Ford’s government is truly “For the People”, it should address injustice, remove barriers and provide individuals with the means to fulfil their potential. It should not further marginalize some of our society’s most vulnerable members.”
https://www.thestar.com/opinion/contributors/2018/08/06/doug-fords-social-assistance-cuts-put-ontarios-health-at-risk.html

Doug Ford is too busy tricking the gullible. “Buck-a-beer” and 10 cents off the price of gas. How are those working out?

I fear that Ford’s back on track will be a return to ‘workfare’ making marginalised people produce work sheets in ‘do-nothing’ jobs without any real employment supports, (after all these cost money to implement).

Won’t do a damn thing for the marginalised except make their lives more miserable, and poorer (as most of the earnings will be deducted dollar for dollar) but will it ever cheer up the base. Beating up on welfare cases really does make FordNation happy.

Note to John – only four captchas this time – bloody annoying

I have no control over captchas – most people rarely get the pictures. You can bypass them (except just one time) if you register then login to comment.

Well Dubious it’s a wonder yours even get published!!

You quote the Star and criticize someone else because you deem their news source as biased? Shake your head.

Geez Walter, have you ever had an original thought? You just trot out other people’s ideas and opinions. But, at least recently, you don’t present them as your own and do give credit to whoever wrote them first.

Yeah… not yet …I am waiting for John’s post on why the CTA had to cancel the All-Candidates event.
LOL

https://windsorstar.com/opinion/columnists/henderson-buckle-up-the-doug-ford-ride-has-just-begun
I just couldn’t resist ! ….. “Da debbil made me do it ” ! 😊

Interesting the Doctor’s in the article have nothing to say about their own glorified profession being one of the main causes of the opiod crisis. Over prescribing, kick backs from drug companys etc. No, they climb up on their high horses and point in another direction.