The second annual Art Walk on Saturday had good participation from the Cobourg stores on King Street, both operating and closed.  It was not clear how many people were aware of the fact that these stores do not normally display Art in their windows – I took photos of 17 stores who had Art in their windows but there were more.  A couple of the photos are below – quite an impressive show.  There were also a lot of vendors in booths on Second Street plus Mercedes tested the waters to see if there was interest in a street car show.  The event ran from 10:00am to 3:00pm and was followed by a pub crawl – but that’s not photogenic so I don’t have photos of that.  In addition there was an artists’ competition in the Art Gallery and a couple of Grand Openings of Stores.

Although the Art Walk started at 10:00 am, the artists’ competition in the Art Gallery couldn’t start until the Art Gallery opened at noon. Billed as the Battle of the Brushes, there were eight artists painting an original piece of art – they had three hours to do that.  Photos below were just after the half way point.  The winner will receive a $500 cash prize from Lighthouse Press; second and third place will receive custom framing of their artwork from the competition by The Painted Tree.  Last year the same event was held outdoors and was well attended but this year, the number of people who actually went to the third floor was limited. (Go here for a report on the 2017 event)

King Street was not closed (although Second Street was) and there were no food booths.  However, there was a youthful Jazz band (The Circle of Sixths Jazz Band) who entertained for the event.  Several organizations were represented: Art de Triomphe, S.O.N.G.,  XLNT  and Quinns as well as several individual artists.

In the mood to “have fun”, Wally Keeler was promoting the “Imagination” and Cobourg as a Feel Good Town. He had a collection of signs in front of Victoria Hall and offered them for Photo Ops.

In the middle of it all, two new businesses had their official Grand Openings: RAW 101 Pet Food store and the Golden Dragon Chinese restaurant.  Councillor Brian Darling was there with two grand-daughters and so were Councillor Suzanne Séguin, Adam Bureau (DBIA) and Jamie Simmons (representing MP Kim Rudd).  The Golden Dragon dazzled with their flowers and RAW 101 impressed with their family helpers in custom T-Shirts. See photos below. 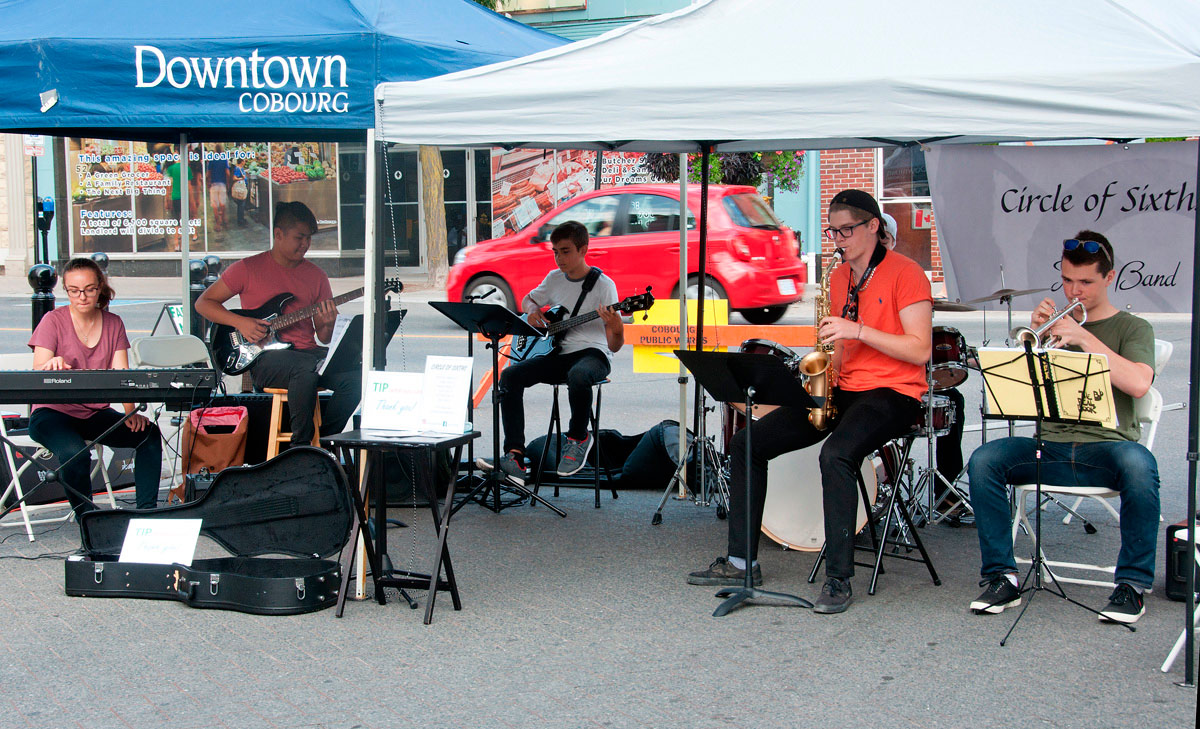 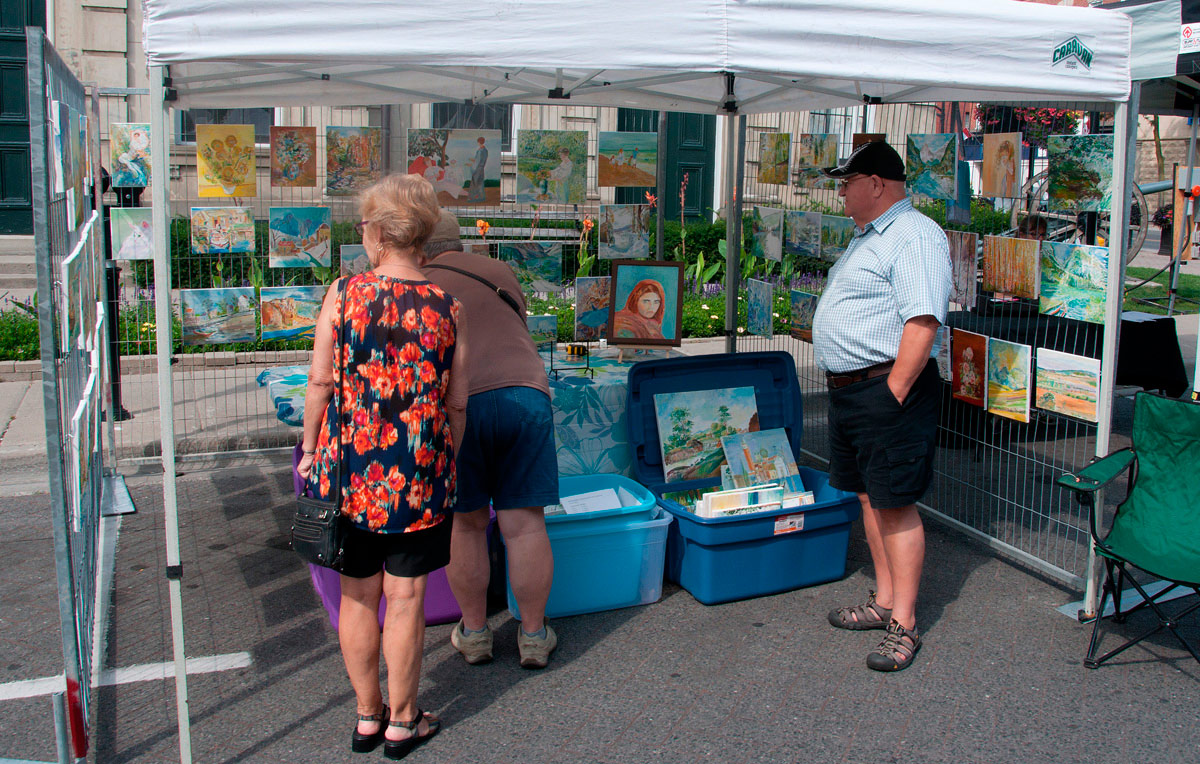 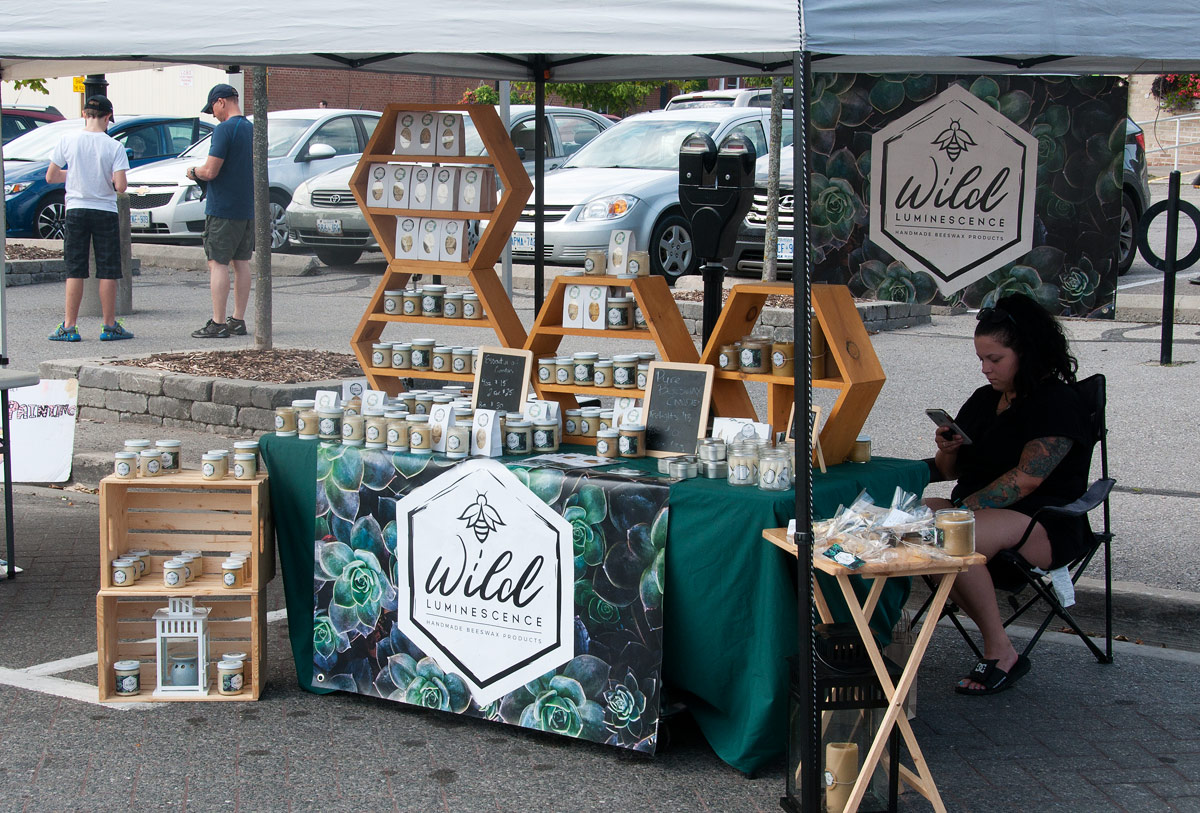 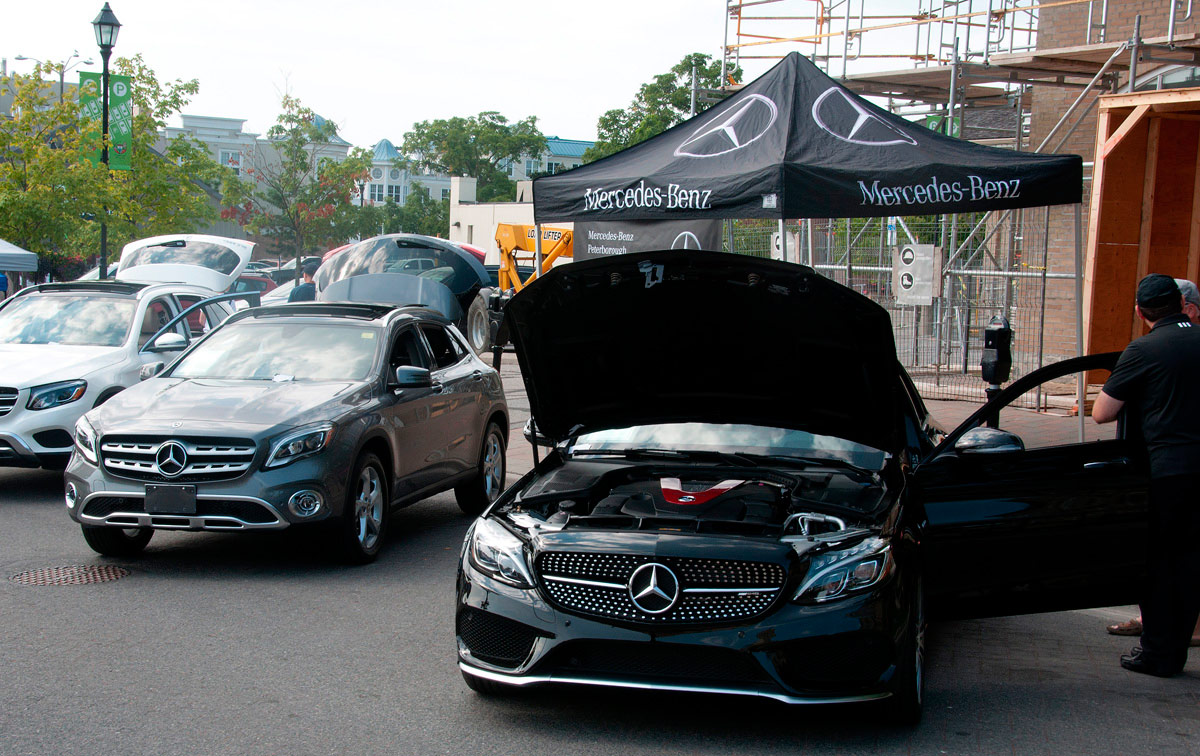 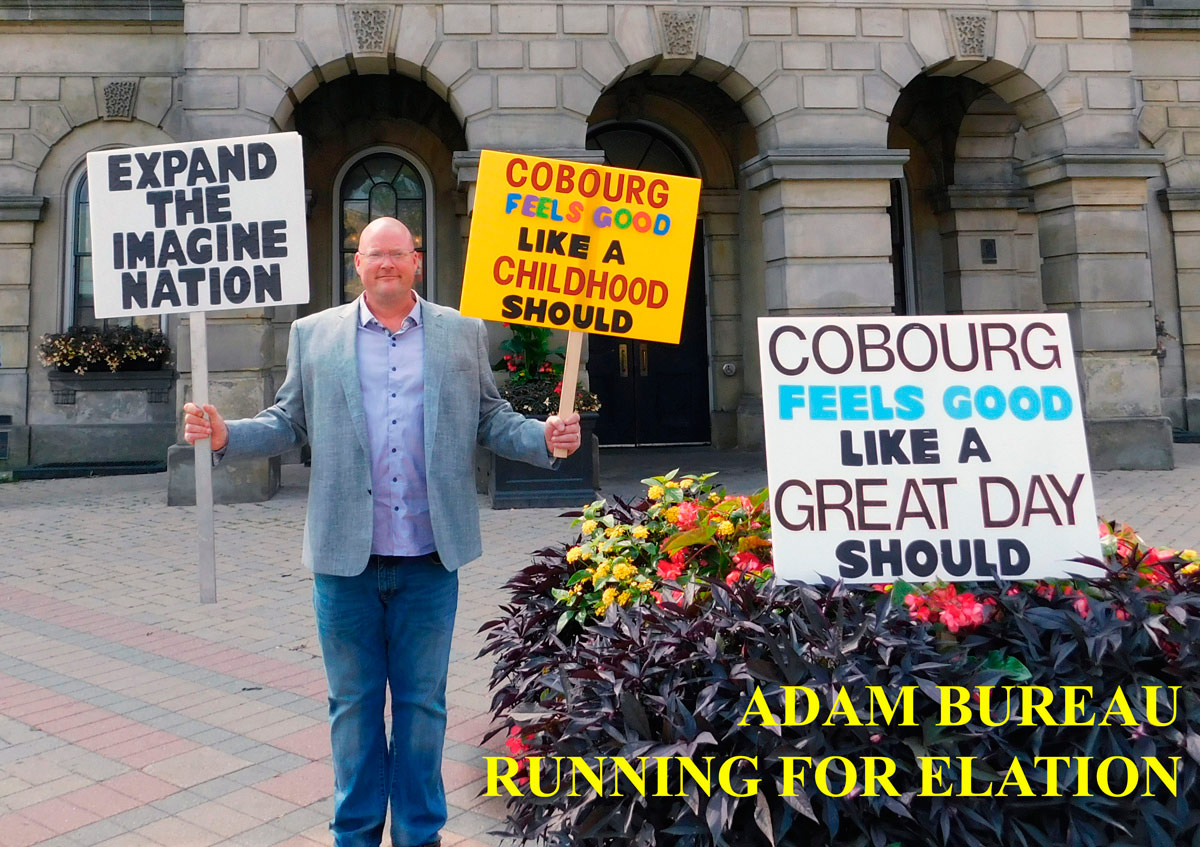 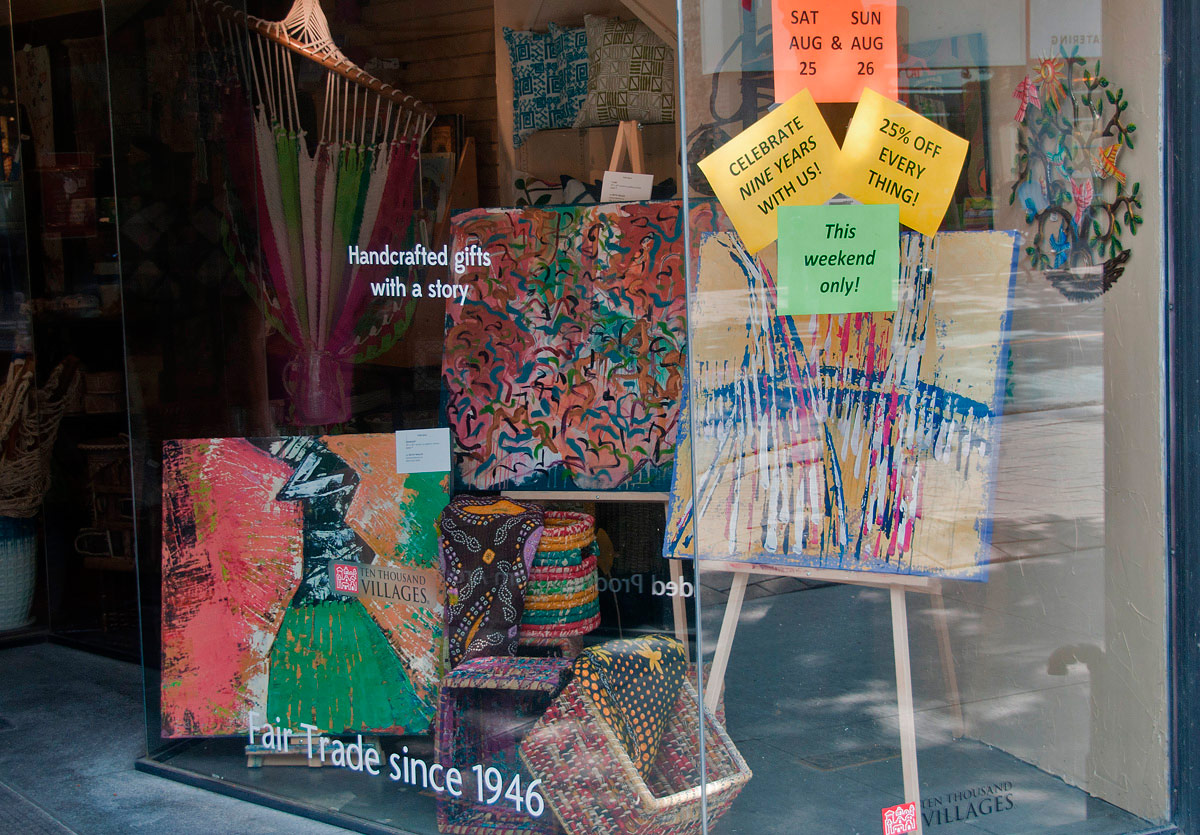 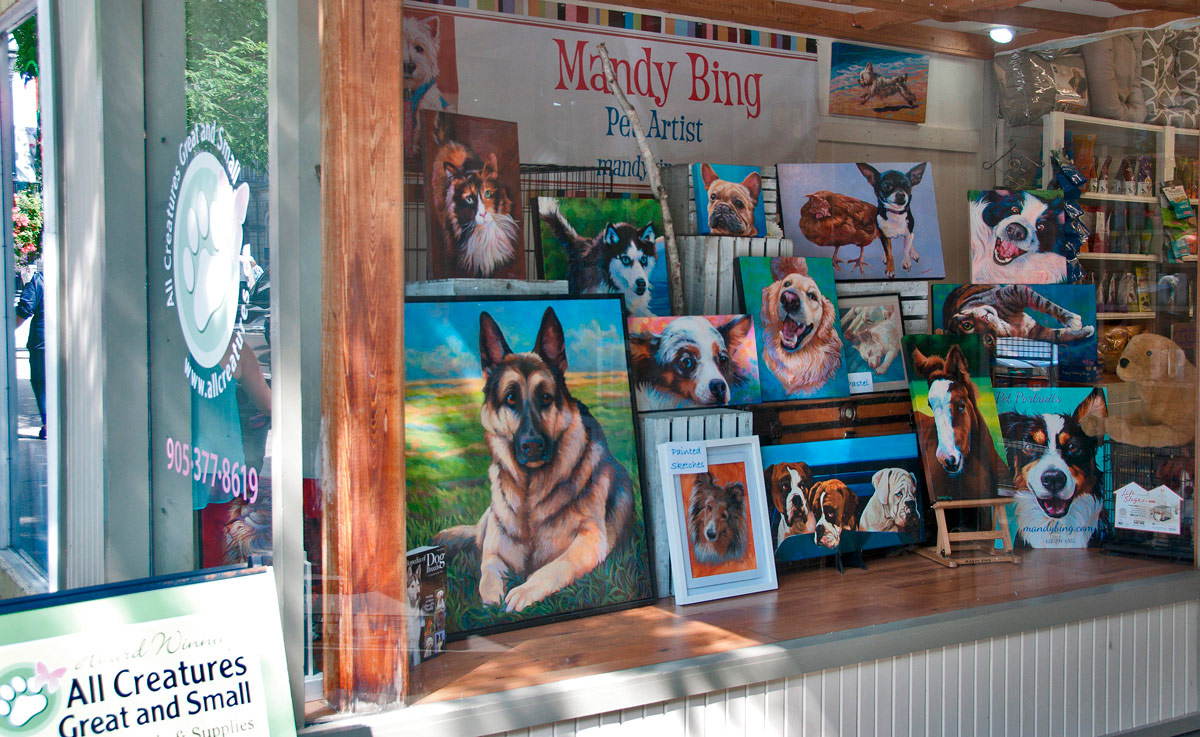 Art Walk - All Creatures Great and Small - Art in Window 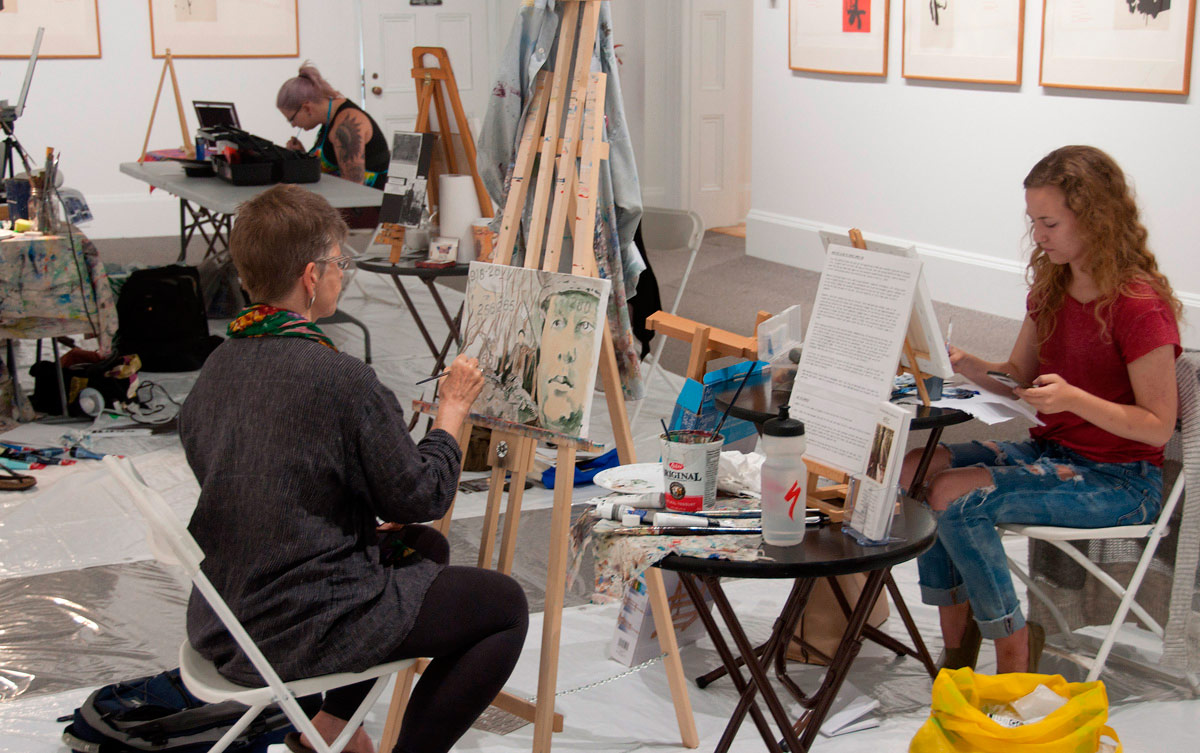 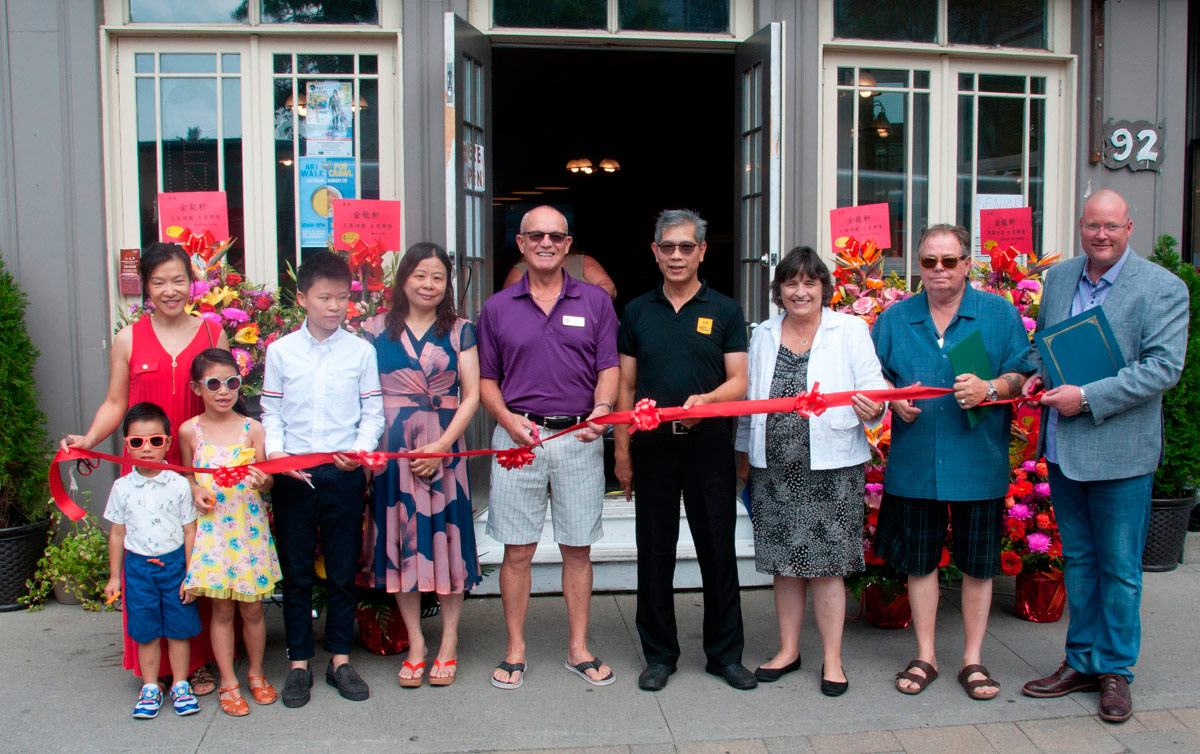 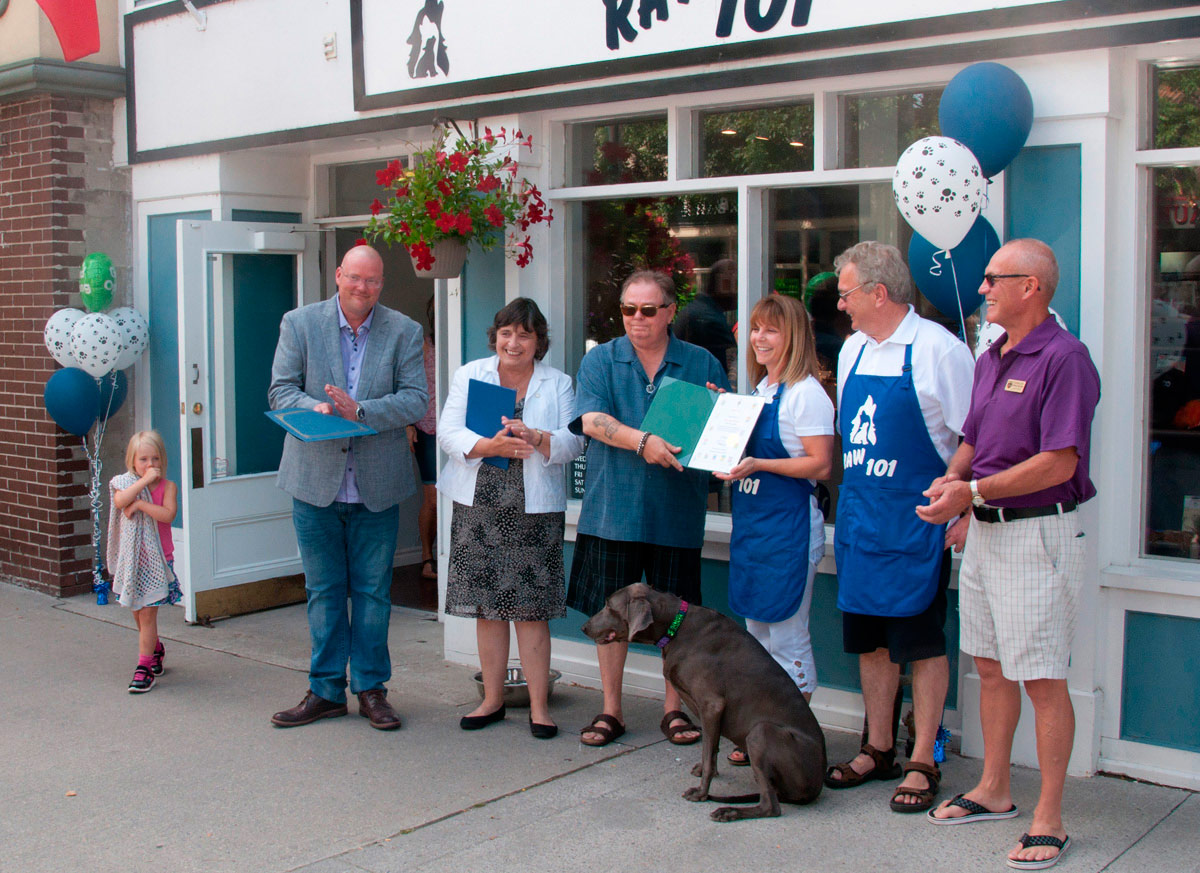 I had a feeling that this year’s event did not generate much street activity. The Battle of the Brushes took place sorta out-of-sight in the AGN rather than on the main street the previous year. There was an AGN sign outside Victoria Hall, but nothing announcing what was going upstairs; passersby unfortunately passed by. The window presentations and participation was much more extensive this year than last year. It made for strolling the street. For the most part the art was canvas-based. The only participation it asked was to be looked at. Not particularly engaging. These are but teething problems for what could evolve in future Art Walks and Talks.

Hi Wally, The Art Gallery welcomed 229 people on Saturday mainly due to the Battle of the Brushes competition. During the presentation of prizes a good crowd was also on hand.

Good for you, Adam Bureau and Brian Darling out and about, being involved in a Downtown event.

It could have been 448 people with a good sign at street level or a raconteur to entice people up to the gallery. I have no problem with the concept just that the execution could be improved. No doubt an autopsy of the event will be conducted and teething problems worked out to improve the experience as well as engage the community much more. No doubt you welcome critique and suggestions to enhance the project. Perhaps next year the Spirit of the Hills Art Association could be approached and engaged. What opportunities could appeal to recent graduates of OCAD to participate? Performance art is a genre unexplored by the Town. Art that is interactive with people is missing in action. Art is so much more than canvas-based productions. Expand the United Imagine Nations to be more inclusive of multiple genres. Great job so far.

Congrats to the organizer of this event! I know how much work it takes to stage a successful Art Walk. It’s a wonderful way to showcase local talent and make it accessible.

A kaleidoscope of great events all summer showing various aspects of our town!
Does it get any better?

Two more people have filed nomination papers for council. Lucas Cleveland (co-owner of Market & Smor) has filed for Mayor and Randy Barber has filed for Councillor.   All info available is here.

Please do not use a name already in use.  Such names will be edited and you risk having your comments deleted.

August 10 – The Town of Cobourg has added a survey asking if we need more outdoor Pickleball courts.