Maybe it was because it was the 100th anniversary of Armistice day or maybe because the weather was OK and it was a weekend – but whatever the reason, it was good to see such a large turnout on Sunday at the Remembrance Day ceremonies – I estimated close to 1000 showed their respects.  Most of the local representatives of the people (otherwise known as politicians) marched and were at the ceremonies – both MP Kim Rudd and MPP David Piccini laid wreaths.  Although Cobourg is still primarily Christian, it was surprising that other beliefs were not respected.  Council meetings have become neutral, but it seems this has not extended to November 11 ceremonies.  However, I did notice a First Nation presence for the first time – see one of the photos below.

It seemed that there were more people watching the parade than usual.

The service was quite moving – it was remarkable how everyone showed their respect with silence. Impressive.  Padre Art King finished his “sermon” with “Let there be Peace on earth and let it begin with us”.

The audience was not only larger than previous years, there were more families and young people.

The ceremony had a similar agenda to previous years and included wonderful renditions of the Last Post by a Trumpet soloist and Lament by a Bagpipe soloist.

As has become the practice, four young cadets stood vigil at the cenotaph overnight and at the ceremonies; when this was announced, the audience spontaneously applauded.

At the end of the ceremony, a large number of wreaths were laid  – and most of the audience stayed until the end.

At 3 pm, the last performance of Last Day, Last Hour was shown to a sold out crowd in the Old Bailey in Victoria Hall.  The day also included some pipers at sunrise on the beach and the bells of several churches and Vic Hall ringing 100 times at sunset. This marks the completion of the Armistice18 commemoration events.

Here are some photos of the 2018 Remembrance Day ceremonies. 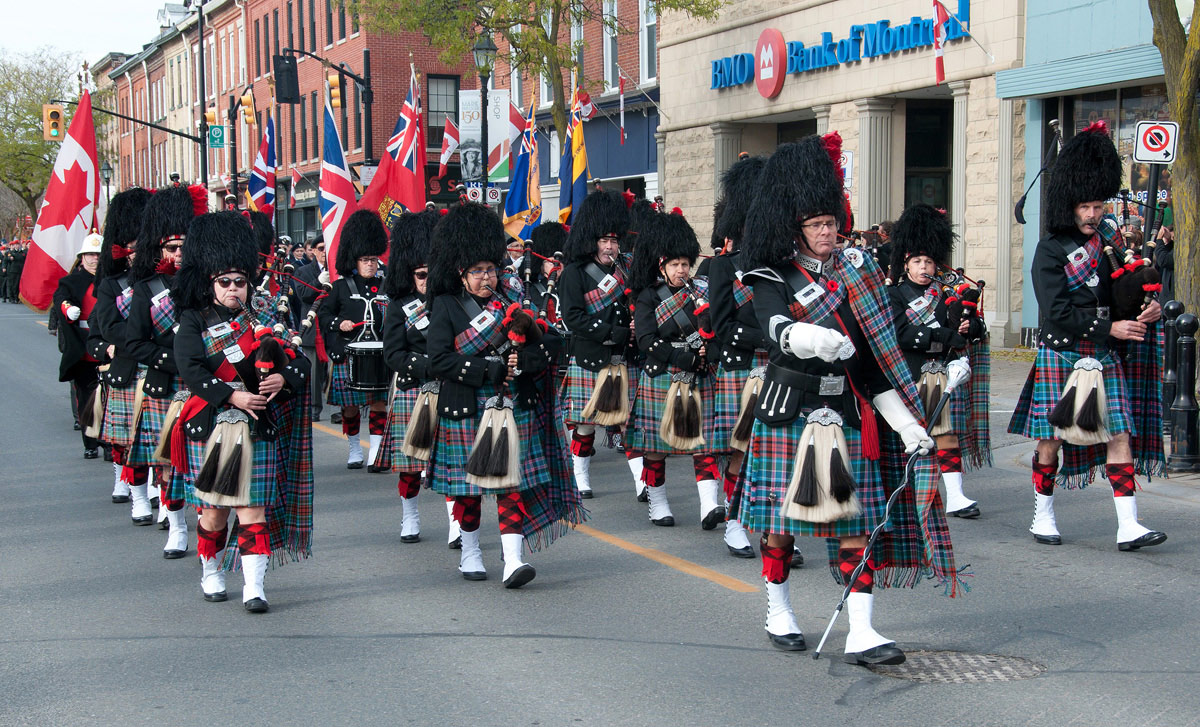 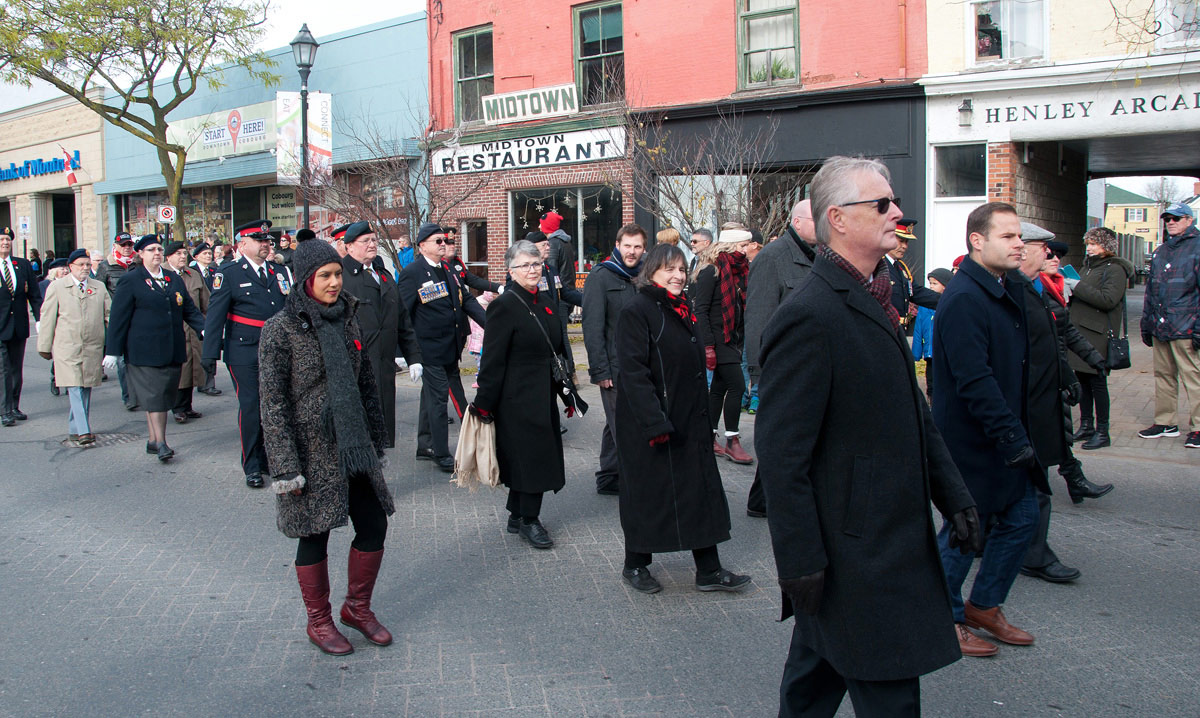 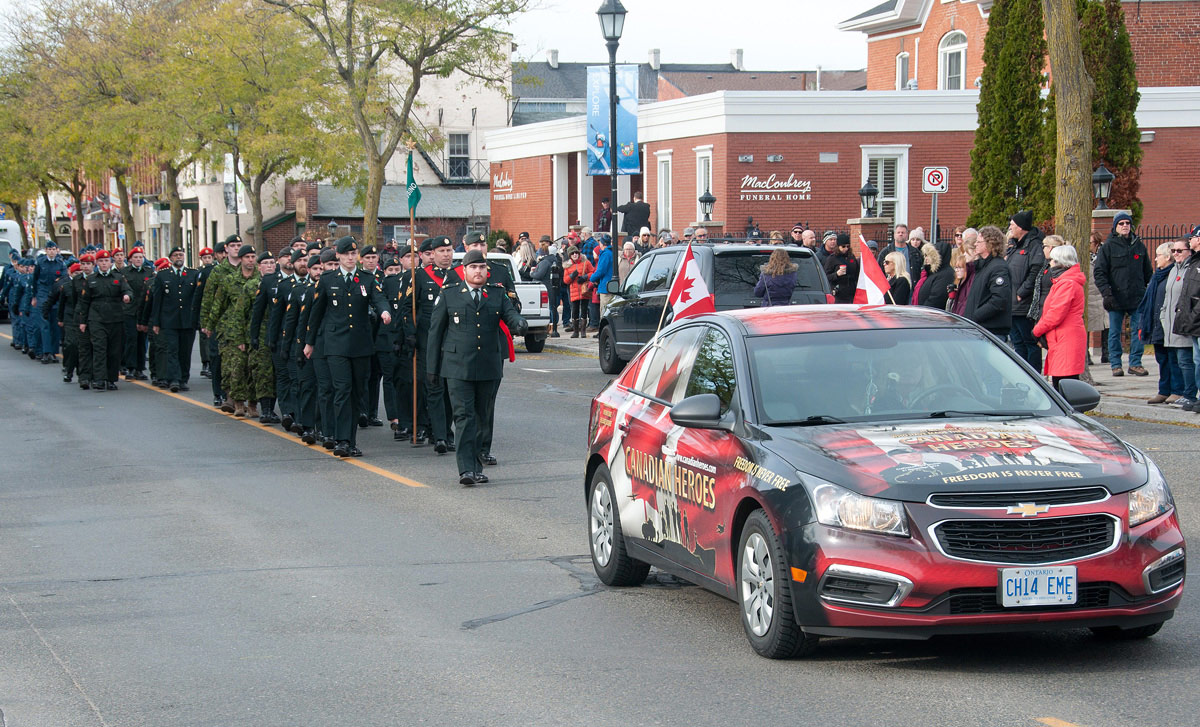 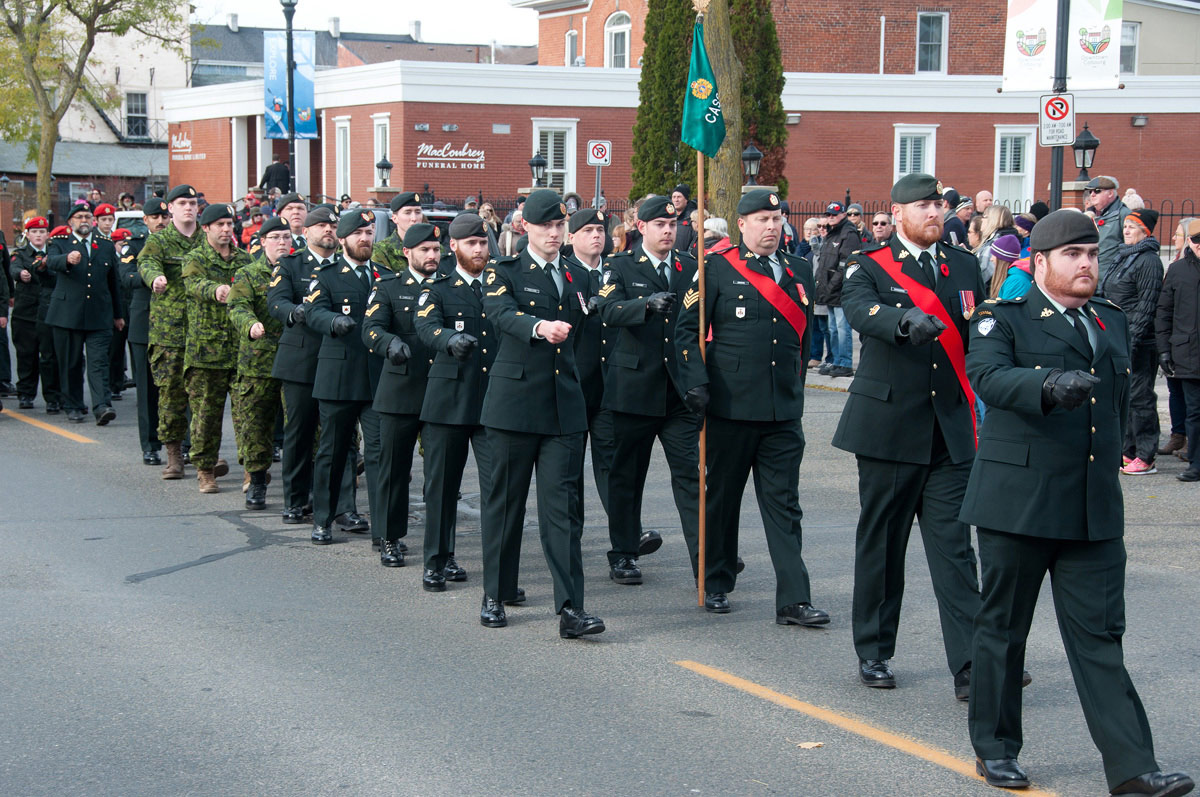 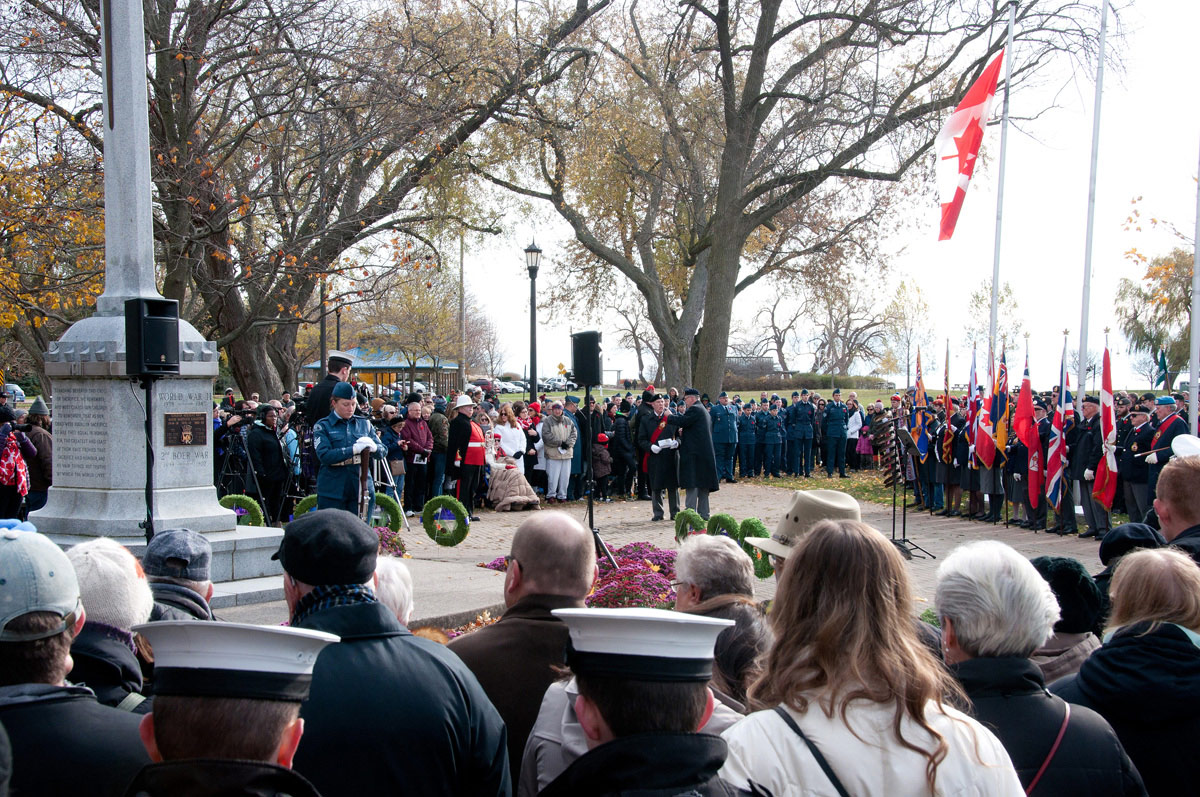 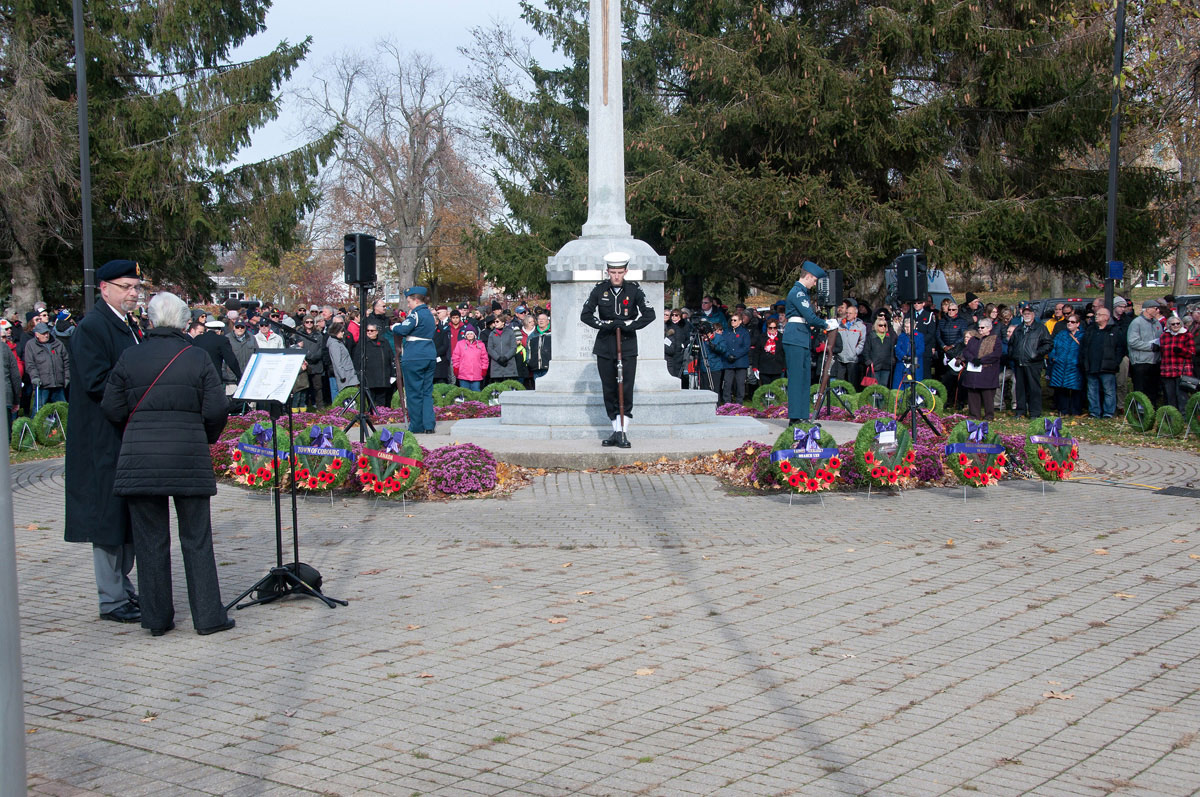 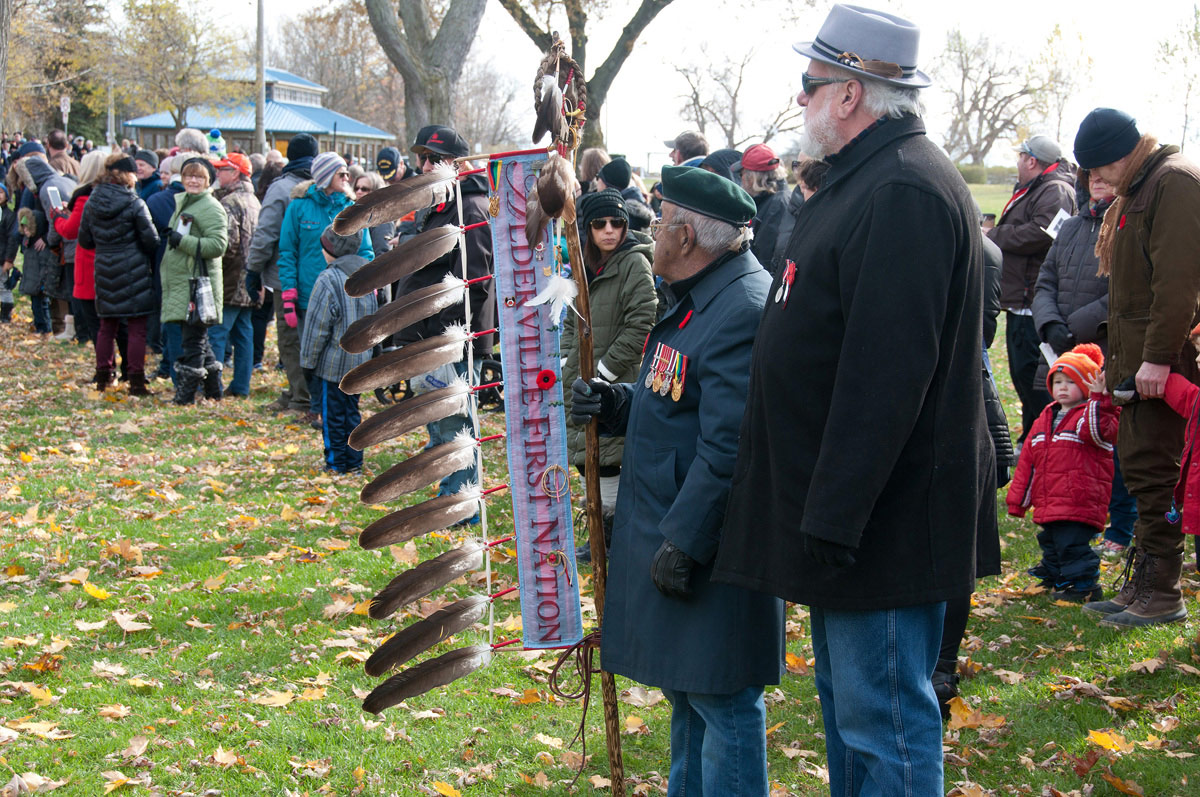 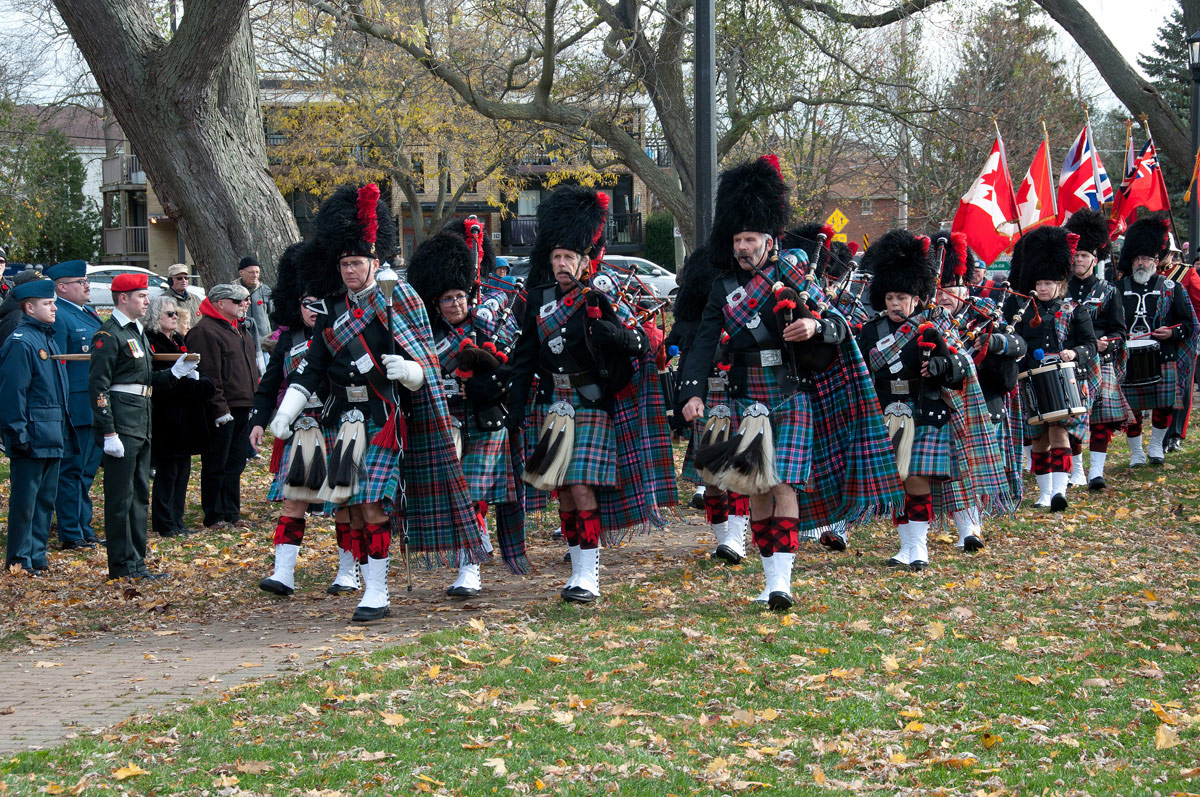 Cobourg Legion Pipes and Drums arriving at the Cenotaph 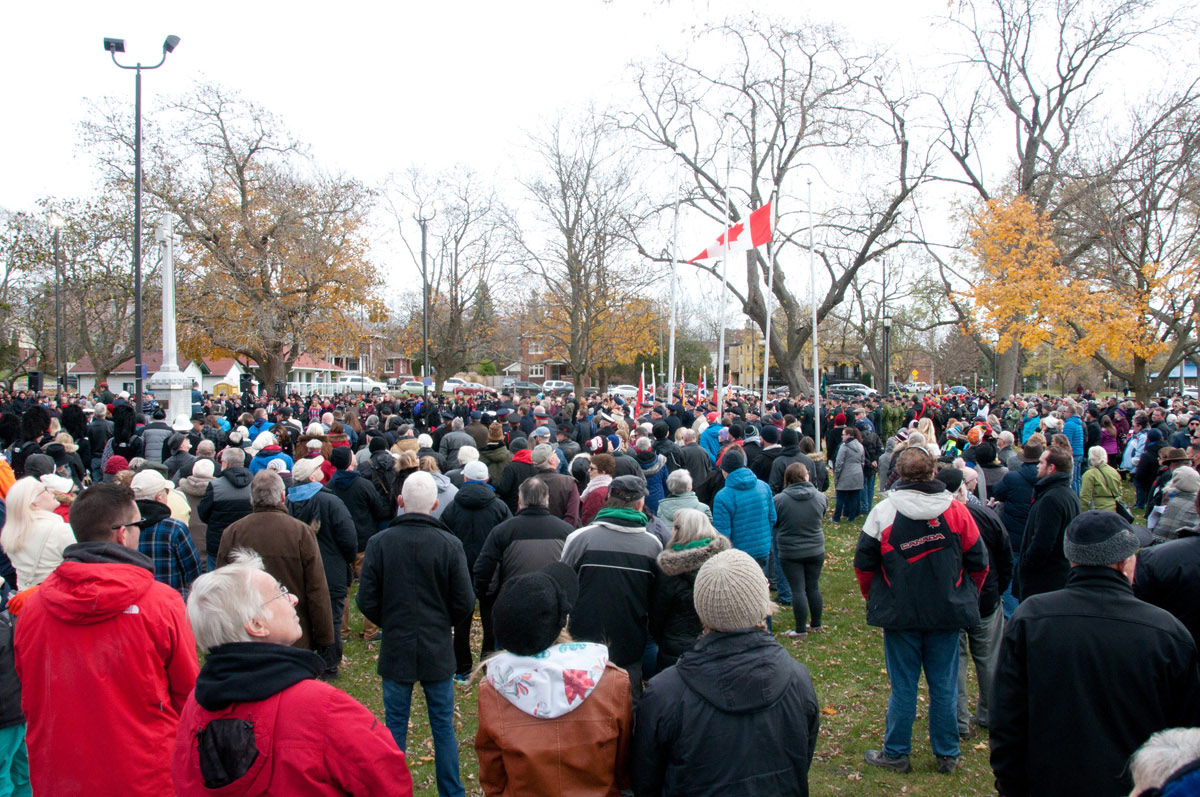 Some of the Remembrance Day crowd 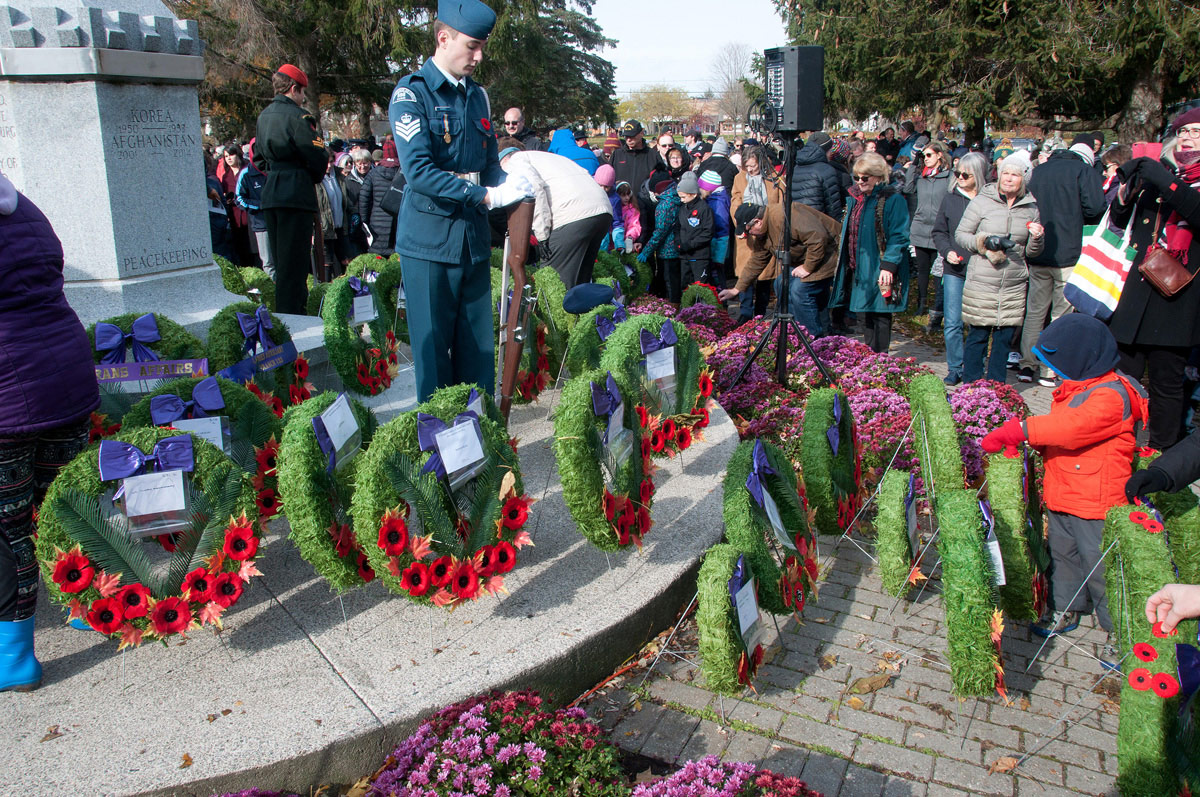 Remembrance Day - Some of the Wreaths

Yes, the ‘field artillery piece’ that the Canadian Forces had here two or three years ago, made quite an impression! I agree that something like this, should be part of the ceremony. Maybe Cadets with training rifles that could shoot blanks ten or eleven times, into the sky? Where was the ‘Hercules’ flying along the shore, to help us remember those that fought in the air?
A wonderful ceremony, though, to help us remember those that made the supreme sacrifice.

This is a video of Cobourg Poet Laureate, Ted Amsden, doing a wonderful rendition of In Flanders Fields, at the cenotaph ceremony in 2014. It would be good if the new Poet Laureate read this poem every year as part of their mandate. https://youtu.be/cUdmmhZ5NvE

We have noted that Cobourg’s “Remembrance Day” is more of a Christian Religious “Church Service” than a Ceremony of Remembrance. (Not that we have anything against Church Services.) We were reminded of this observation while visiting Relatives this year in Beaverton, Ontario. At 11:00 a.m. bells rang 100 times and afterwards names of all of the local Fallen were acknowledged.

With the sound system the way it is, we wouldn’t be able to hear the names anyway.

The service was very moving and on a lovely,not too cold morning. One comment from a British relative who was with us is that she was surprised at how few people sang the national anthem. Considering the size of the crowd it could have been much louder.

I agree, we needed someone to lead in the singing of all songs otherwise a moving ceremony.

Was sadden to see the wreaths been taken away straight after the ceremony. Maybe they could have stayed for a day or two. The cenotaph looks bare now and sad. Other than that it was an amazing moving day. Proud to have been part of it.

In case anyone thought members of Alderville didn’t participate in Remembrance Day ceremonies I’d like to point out they had their own service at their cenotaph on November 5th. The Cobourg Legion Pipes and Drums performed as they honoured the 33 men who served in WW1, especially the 9 soldiers who died fighting in it.

I’m sure I’ve seen a First Nation’s presence at the Cobourg ceremony in past years. I remember that the Eagle Staff was always with the colour party. Can anyone confirm?

Yes I have photographed them in previous years. The gentleman who held the feather staff this year was present last year. I photographed him then.

Thanks for the correction. Seems I simply didn’t notice him previously.

Yes, the crowd was more significant than in most years, and I too was impressed with the number of young people in attendance. As in past years, I had trouble hearing the ceremony. I have asked others around me, and they too find the sound system wanting. One other suggestion is to have a small raised platform so we can see who is talking.

I agree with Mr Childs and was also impressed with the number of families with their very well behaved young children. The rendition of the “Last Post” was flawless.

Gerald, I agree with the raised platform idea. For the first time I did not attend the ceremony but watched it on channel 10 – so I could listen to and see the speakers. Another successful remembrance day in Cobourg.

“Although Cobourg is still primarily Christian, it was surprising that other beliefs were not respected.” Not sure what you meant by that, or was the word “respected” meant to be “represented”?

Other beliefs include Jews, Muslims, Atheists, Hindus, Buddhists, Agnostics, Sikhs and more. And it is disrespectful to assume they are all happy to be ignored.