When CDCI West closed, the building was put up for sale and it was bought by Jeff Weng who operates William Academy in Scarborough and will open a second Campus in this building in September.  He plans to have 50 students to start – 30 international and 20 local.  To encourage local students, he is offering 20 scholarships which will cover students as long as they stay at the school.  To start it will be primarily grades 11 & 12 but will accept from grades 9 to 12. The idea is that both international and local students will benefit from mixing with each other.  Jeff already operates the successful Scarborough campus but both he and the students like Cobourg so he wants this campus to expand to maybe 300 students.

A Principal (Anne-Louise Power – photo below) is in place and teachers are being hired or will operate in both school locations.  The building is ideally suited as a school since it was built for that purpose although there have been extensive renovations.  There are 3 gymnasiums including one that has been set up as a media room and during the open house on Saturday May 19, it was providing funky entertainment.  The top floor classrooms have been converted into dormitories and can accommodate up to 80 students.  Expansion will require off-campus accommodation but all students would get meals provided by the school and be bussed by the school every day.

Jeff was keen to demonstrate the security system with 60 high definition cameras throughout the school.  He said that security is a major focus.

Students are expected to come from a range of countries – the mix in 2017 was:

Fees are significantly lower than the more elite Trinity school in Port Hope – details are available on the school’s web site.   Owner Jeff Weng and Director Louis Sacco (photos below) said that they are aiming for a more balanced group.  All students are expected to go to a University after graduation – the school actively helps with that, it achieves an acceptance rate of 96%.

Below is a video from their web site which emphasizes the Cobourg campus and the benefits offered.  Although the school was not fully operational in 2017, students came from Scarborough for various events.  The video is as much a promotion of Cobourg as it is of the school.  It also explains how the Asian approach to school of discipline, a passion for learning and hard work mixes with the Canadian joie de vivre, creative and analytic approach so that the diverse cultures learn from each other. Living in Cobourg is seen as a benefit for International students and mixing with international students is a benefit for Canadian kids.
Cobourg has already given students and staff a warm welcome and Jeff commented that he had noticed. 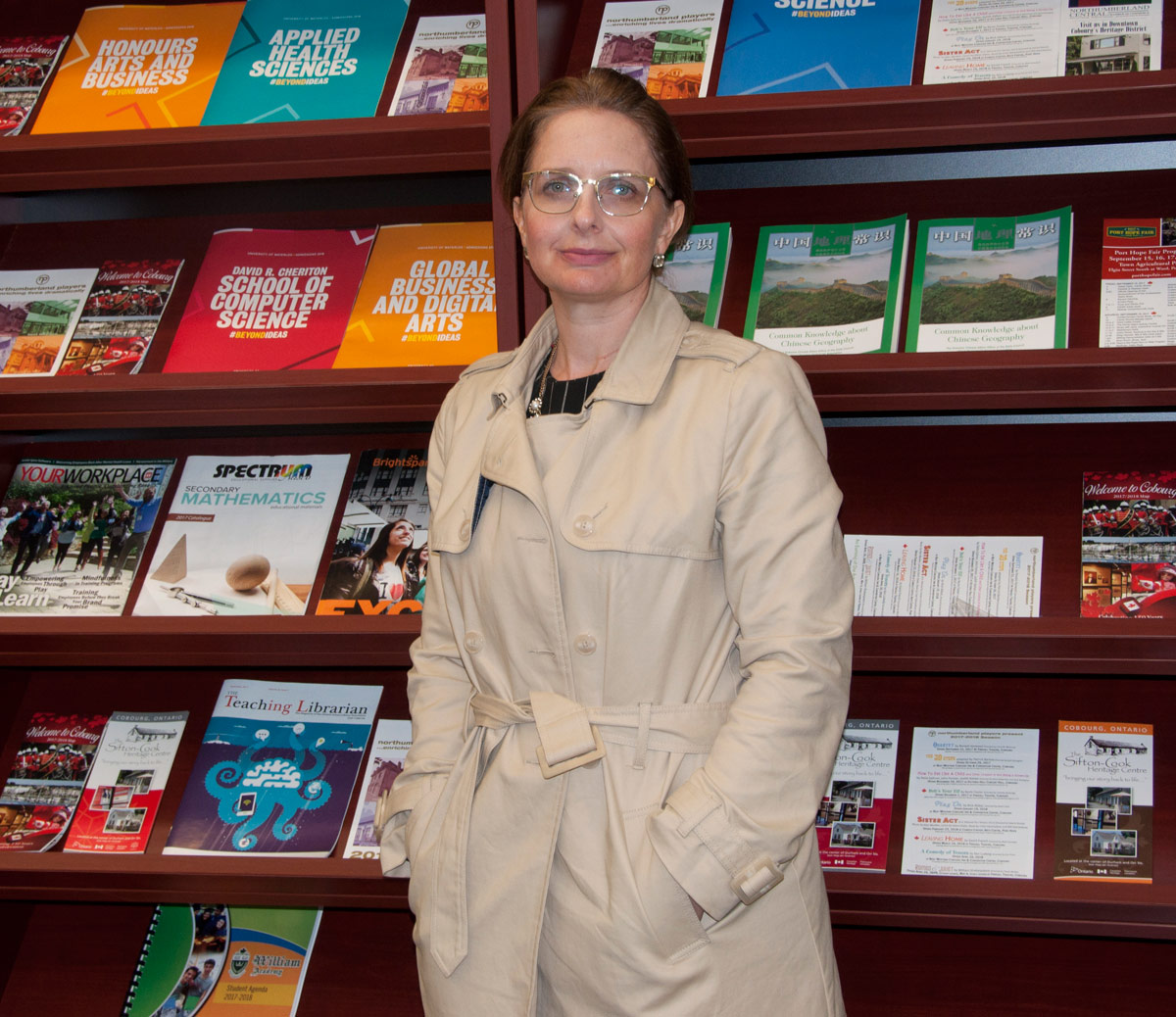 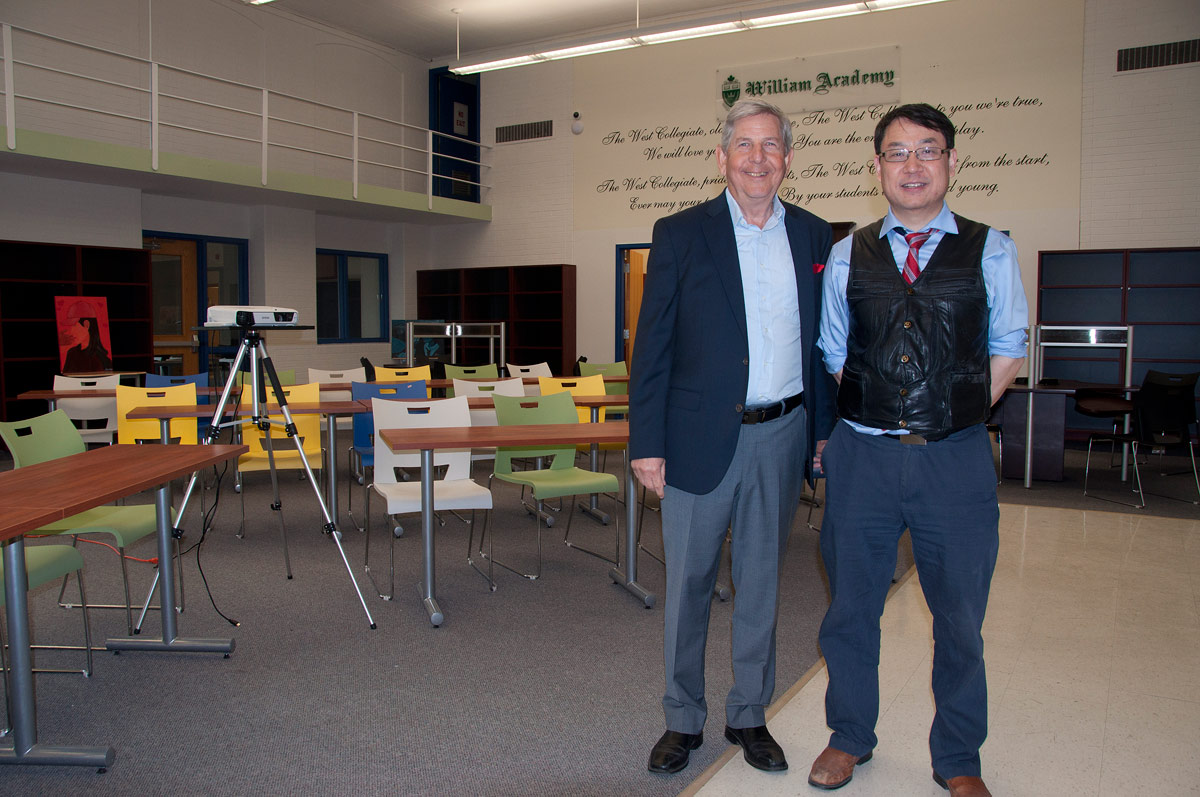 This is the kind of thing that delights the CTA folks – user pay high school.
And it’s USER PAY – the most basic package is almost $20.000.
There is also a host of other incidental fees – such as a Grade 12 Graduation Package – $600.
And a shared room for $1,100 per month.
And what do the students get?
At least most of the teaching staff at William appear to be certified, but they don’t have to be.
And it’s ‘buyer beware’ since the Ministry of Education does not regulate, licence, accredit or otherwise oversee the operation of private schools. No deep state here.
In fact, the Ministry seems to wash its hands of the whole for-profit-education business.
The parents are urged – in bold print – to kick the tires themselves.
William Academy modestly calls itself an ‘elite private school’.
And with a name like William -no doubt after the Duke of Cambridge – and a crest with ye olde English script one might think that the ‘academy’ is not far off from Eton or Harrow.

What are you smoking/drinking this early in the day?

What could this possibly have to do with the CTA?
If you don’t like the prices (not sure how much that room per month is), don’t pay.
I think they said that what the students get is a 96% acceptance rate at universities. What the students might also get is the assurance that their teachers won’t go on strike every now and then.
How do you know the founder’s name wasn’t William? Yet you are sure the school is named after the Duke of Cambridge.
Have you got the same problems with Trinity School in Port Hope?

Eton on King Street!
The CTA folks like the user-pay idea, example the marina, the CCC etc, no?
Heaven forbid that the taxpayer should be involved.
What these for-profit high schools are selling is not just education, they are selling good grades.
What greater incentive for grade inflation than to satisfy your customers, i.e. students and parents.
For the money these customers are forking over they better get into universities.
Otherwise they’ll sue!
The owner and founder of WA is Jeff Weng,
When I think how far we have come in the education business from the day when Col. King was Principal in the same building!
And I drink Folger’s coffee in the morning.
Laughs. Anything else?

I agree with some of your points Walter. In my opinion, these schools are also providing an excellent opportunity for the international student to gain university acceptance into a Canadian university. To be honest with you, I find it incredibly frustrating. I have a son who just found out that he was not accepted into the University of Waterloo and University of Toronto Computer Science programs. Over the past four years he has made many sacrifices in order to get good grades at school. He currently attends a very reputable high school and has a 92 % average and yet he still didn’t get in. Life is not easy, I know. I am not the type of parent who expects everything to be handed to my sons on a silver platter, but geeze, as a parent it is hard to watch. It is my belief that the international schools operating in Canada sell their programs to parents who hope to see their children gain acceptance into the top universities in Canada (which, in my opinion, take spots away from Canadian students). Unfortunately. too many Canadian students are having to go overseas in order to get into their program of choice. It appears that this has become a very profitable business for universities worldwide as they receive higher tuition fees. What a shame. I am proud of my son where ever he goes and he may be stronger for it.

Why do Canadian universities rely on high school grades rather than standardized test scores? In the US (and I believe many other countries) SAT or similar test scores are required for university admission. Using tests administered by an independent service would eliminate grade padding by some schools as a way of getting into university and give everyone an equal chance based on ability.

Good points Susie and Dubious!
Ontario used to have province-wide Grade 13 ‘Departmental’ exams, marked independently in Toronto. Long gone!
The Ministry of Education has tried to rein in grade-inflation by requiring that private school grades in transcripts are marked with a “p”.
“When Kathleen Wynne became the education minister, and then the premier, (the attitude towards private schools) changed from indifferent to hostile,” said Barb Bierman, executive director of the Cambridge-based Ontario Federation of Independent Schools. http://www.therecord.com/opinion-story/8614216-d-amato-if-liberals-lose-private-schools-hope-for-relief/
Bierman hopes that a Tory government will go easier on private schools.

Mustn’t overlook the advantage of it when / if it comes to possible immigration applications after graduation.

Let’s make sure that these international students our local students will benefit so much from mixing with have been screened for communicable diseases.
https://www.thestar.com/news/gta/2017/04/27/dozens-to-be-tested-after-tuberculosis-case-at-niagara-private-school-dimanno.html

This will be great for downtown Cobourg! [Note – the user name for this comment has been changed to one used previously – using many different user names is contrary to the rules of this blog]