The May 2-4 weekend is when many think that the warm weather is here and it’s time to visit the beach – and Sunday was sunny although not quite beach weather.  But Cobourg’s beach was not quite ready – the water level is close to record highs and the beach still has puddles and mounds of sand from dredging.  Although dredging appears to be finished, the beach still needs to be groomed with a grader.  The water level is about 3.5 inches below the record set in 2017 but the beach sand seems to be higher – presumably by the dredging – so it’s not as bad.  In 2017, the fueling dock was covered in water but it is not quite there yet – at least not so far.  Whatever, it’s 76 cm above normal for this time of year.  That’s 30 inches.  It’s hard to know if it has peaked but it probably has.

See the photos below and the updated graph in the linked article.

But on Sunday afternoon, there were people playing catch, flying kites and just strolling along the path.  A good number of trailers are already in place and it certainly feels like summer is coming soon.

Because of the high water level, the new lifeguard stands have been moved back somewhat although they are not in use yet.

The modifications to the east parking lot on the Esplanade are not yet complete but the Esplanade is definitely one way as Council decided.

Marca’s, the Italian restaurant at the corner of Division and the Esplanade, closed earlier this year.  But on Saturday a new Italian restaurant opened up in its place and on Sunday there were patrons on their patio (see Photo below).  It’s called Cucina {Urbana} – which a Google search tells me is Italian for Urban Kitchen.  It calls itself an “Italian Kitchen and Wine Bar”.  Early reviews look good but as expected the prices are high end as were Marca’s.  But many in Cobourg will try it out so they should do well for at least a year or so – longer if everyone loves it.  And they should get a good summer visitor crowd. 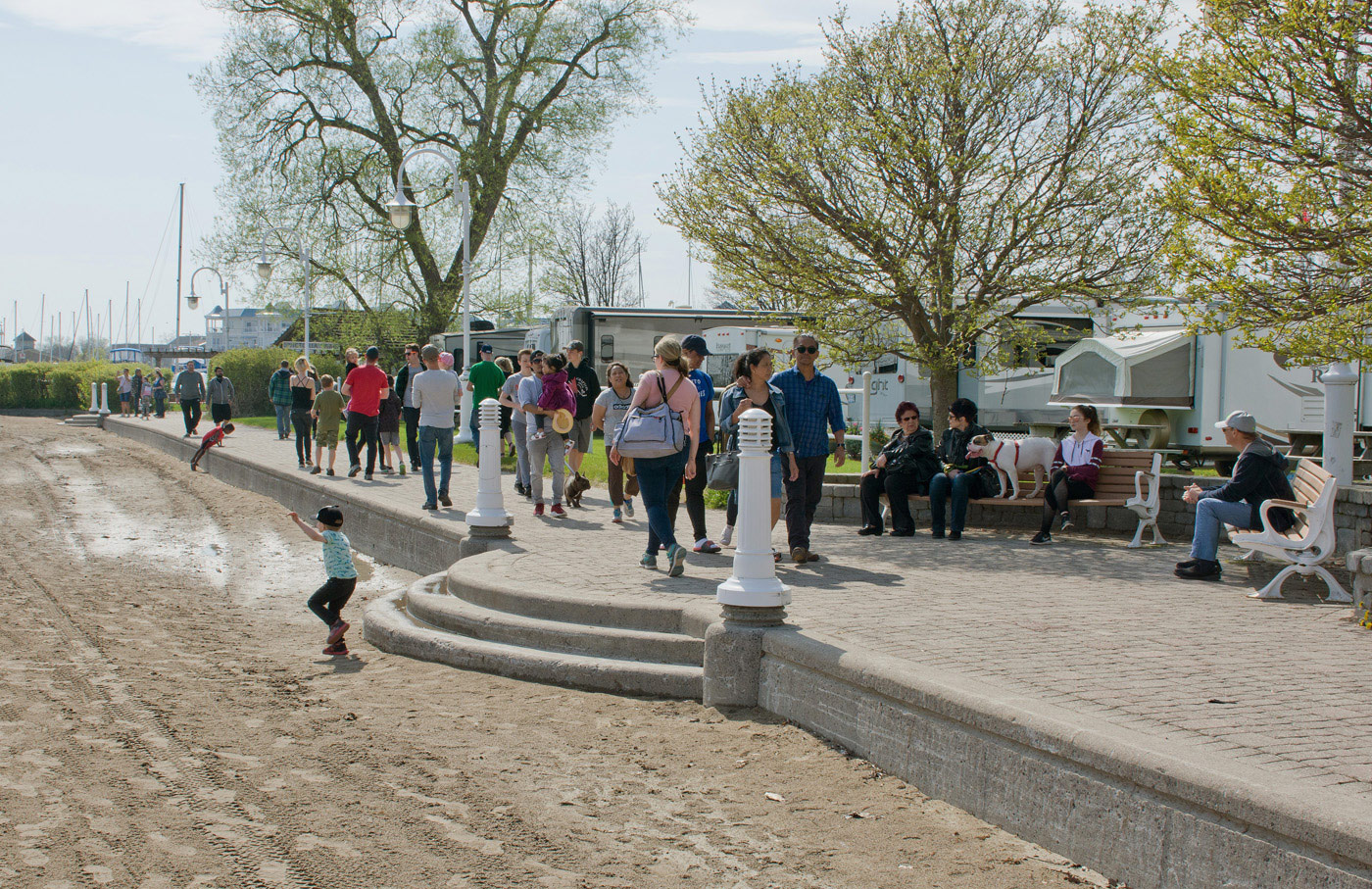 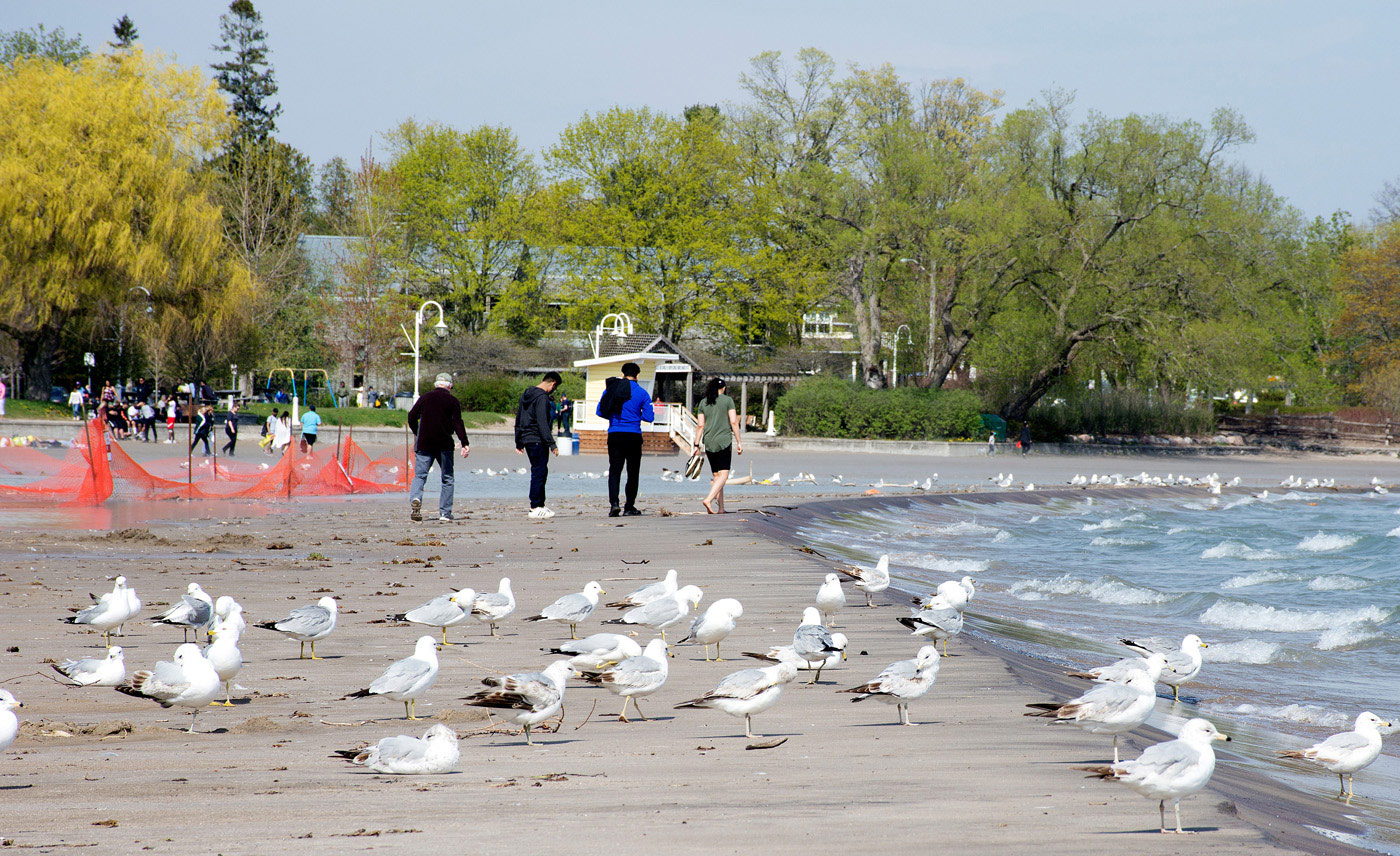 Beach is still not ready 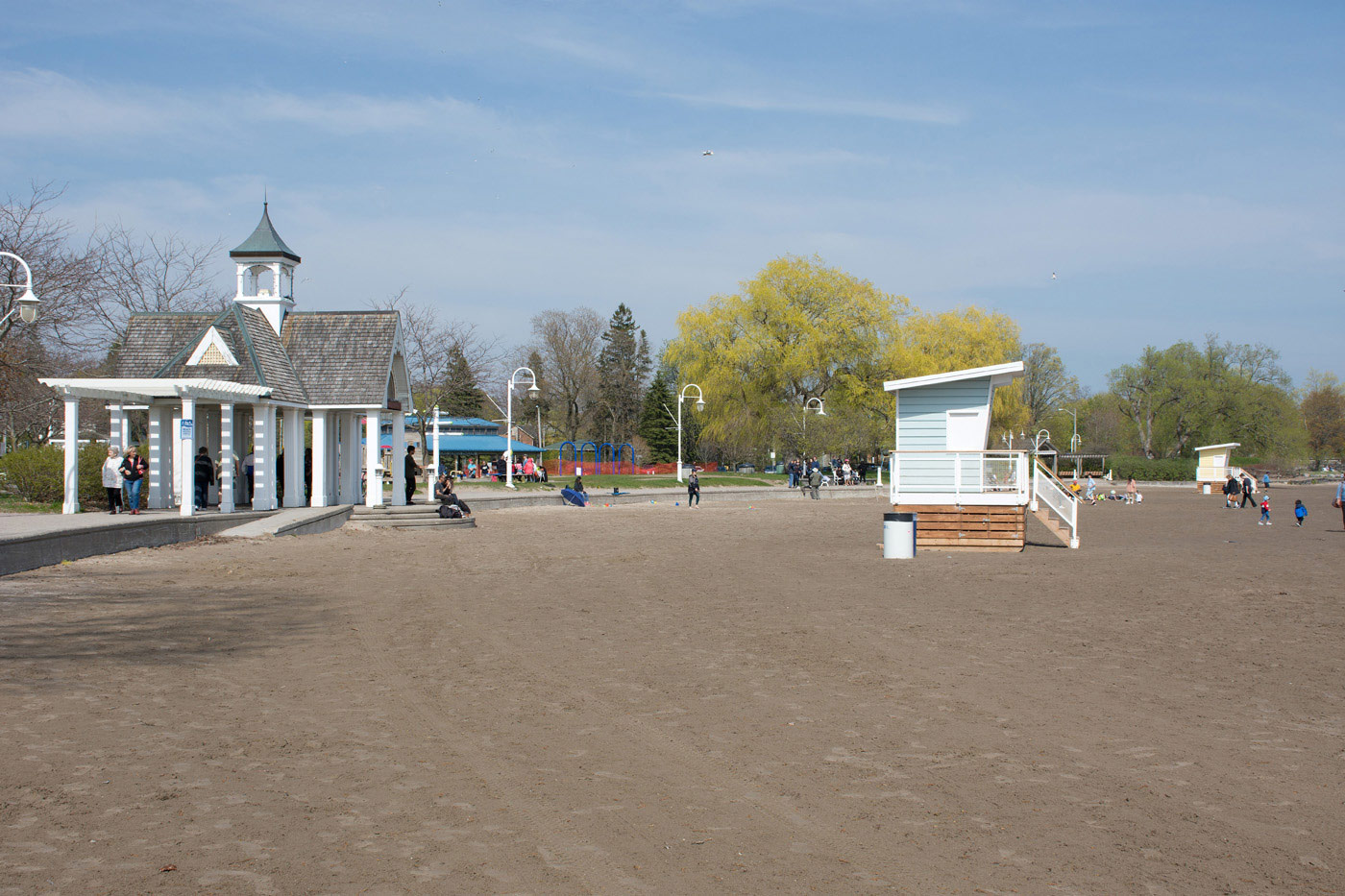 Lifeguard stations have been moved back 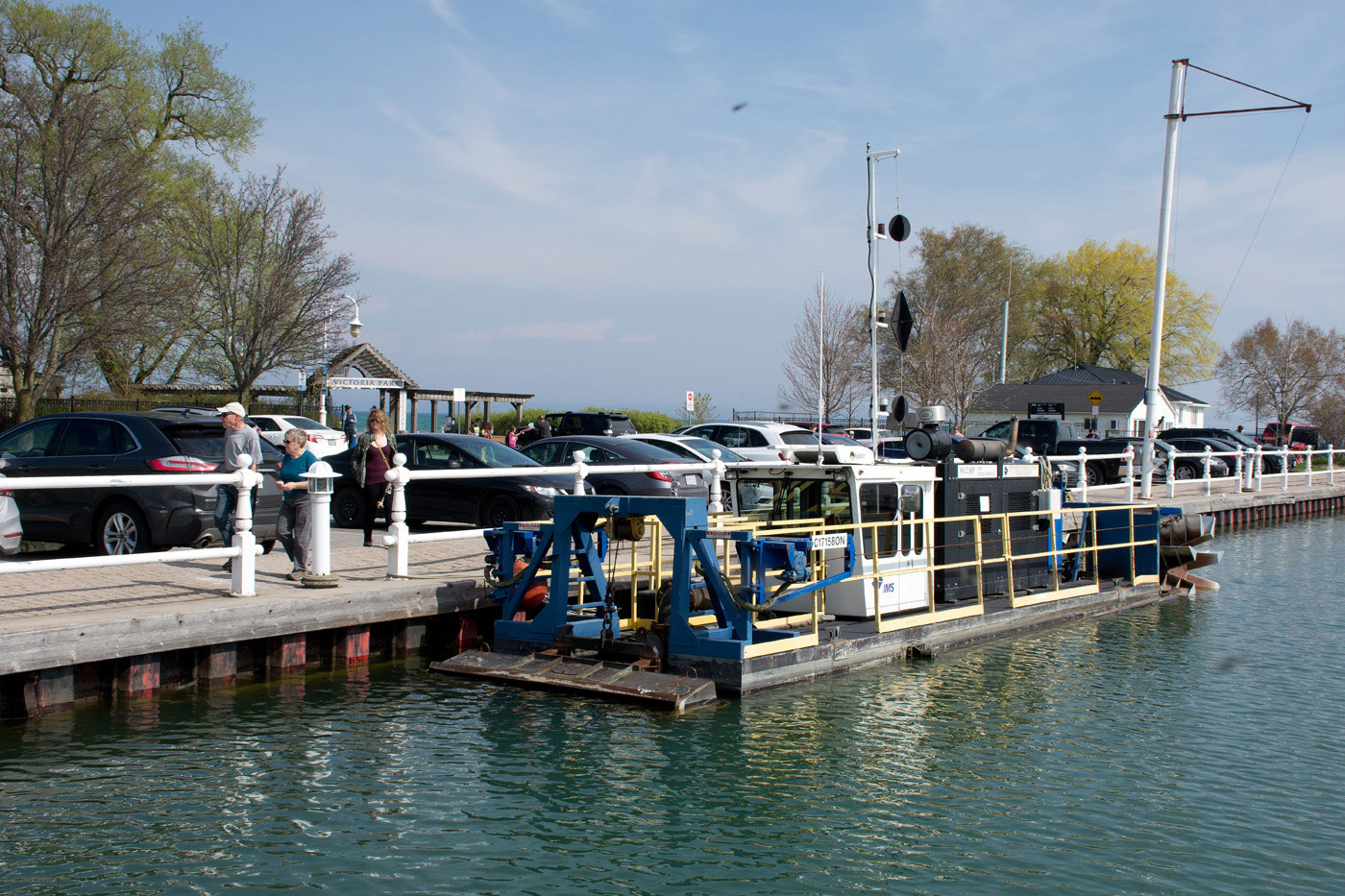 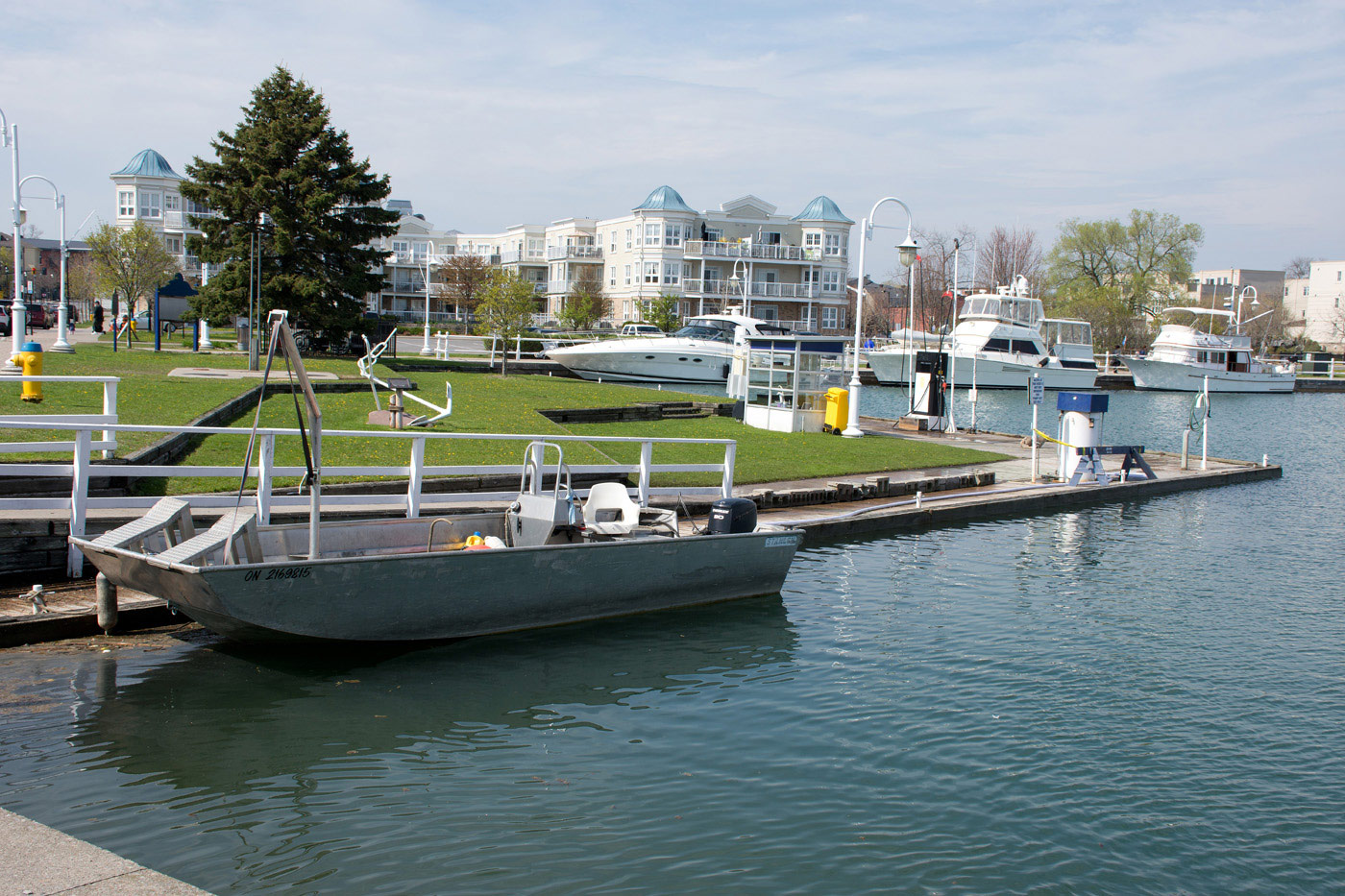 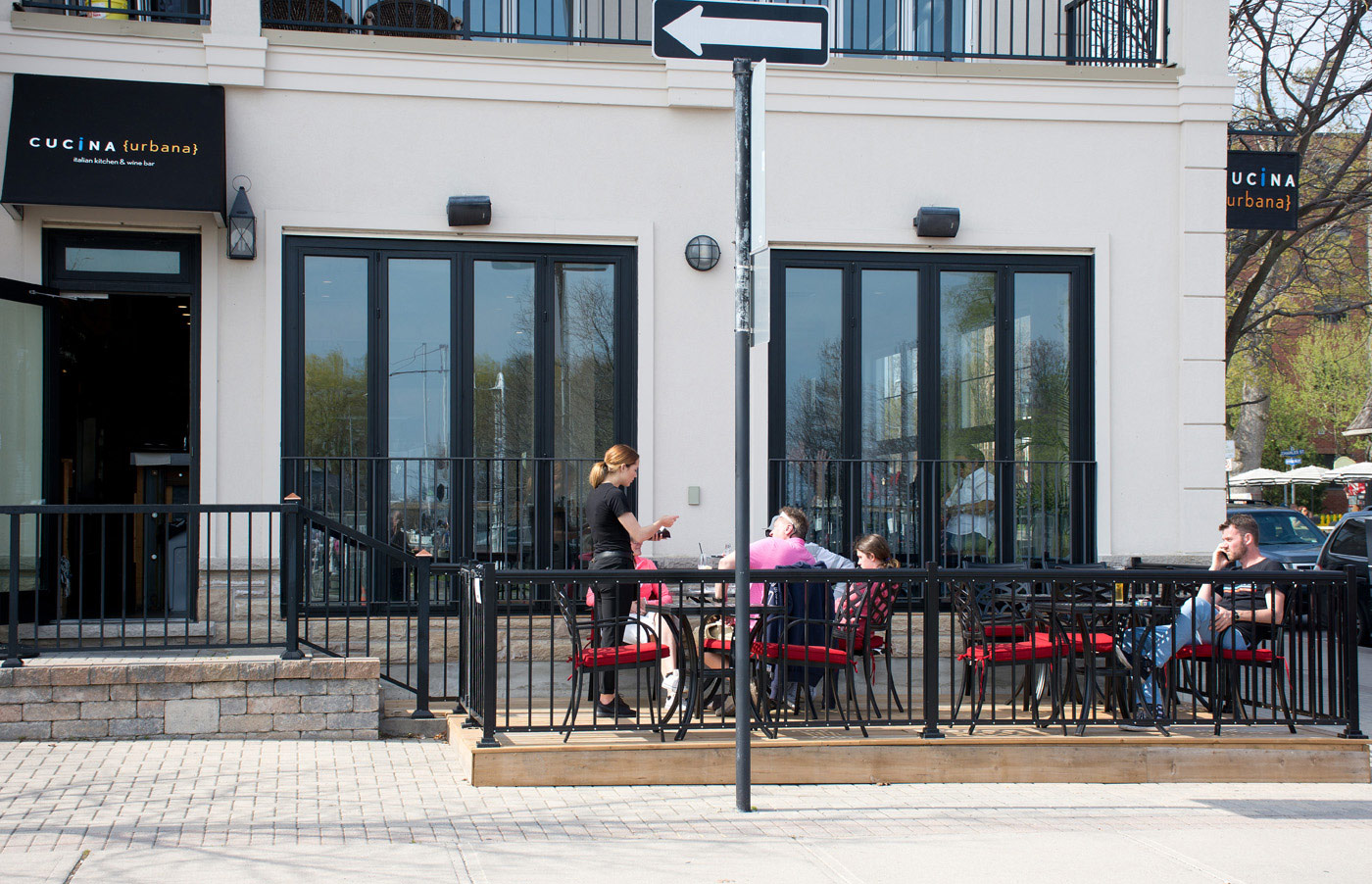 Lake levels have not yet peaked according to Lower Trent Conservation although they might do so within a week.  On May 23, the Coast Guard reading was equal to the peak reached in 2017.

Lower Trent Conservation advises municipalities and the public that the Flood Warning for Lake Ontario and the Bay of Quinte issued on May 9th, 2019 is still in effect.

News is that Lake Ontario now is at highest level in recorded history for the lake’s water levels.

“Ottawa next year begins to roll out updated flood-plain maps that replace current ones that haven’t changed in a quarter-century.
If you’re a property owner in a district at high risk of flooding, brace for steeply higher insurance premiums, or that no one will insure your property.
A drastic property devaluation appears to be in store nationwide, most acutely felt by owners of the estimated 5 per cent of at-risk properties in Canada that simply can’t be protected.
Once Ottawa’s updated flood-plain maps — close to 2,000 of them — become available next year to insurers and prospective property buyers, a great many properties across the country might not sell at any price – their value dropping to zero.” Toronto Star
With four creeks running southward through town, it will be interesting to see what the new flood plain map looks like.

The Cobourg Museum, located on Orr Street, has a video of the Cobourg-Rochester ferries in Cobourg Harbour in the 1950s era. Have a look at the lake level in the video. Seems very high, not unlike what has been happening in recent years. And, the current displays at the museum are also very good.

If you are interested, monthly water level data from 1918 to 2018 is available at http://www.tides.gc.ca/C&A/network_means-eng.html

Before the construction of the Saunders-Moses Dam in 1958 lake levels were not controlled so, yes, there were times of very high and very low water levels. The highest monthly levels ever recorded were in 1956.
Unfortunately the IJC has decided that widespread flooding is preferable to controlling water levels; flooding serves to validate “climate change”.

Yes. yes Dubious!
It’s all a big conspiracy as you have said many times before.
But maybe dealerships are still available. 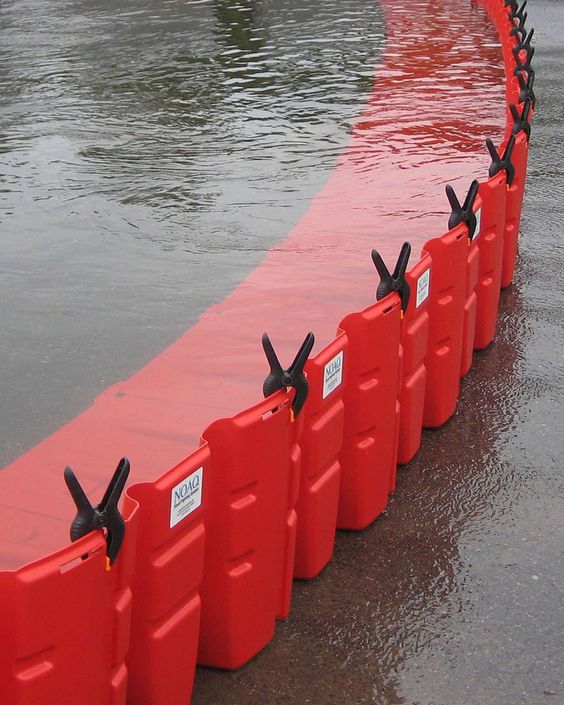 Thanks, Dubious. I did check the site out previously and noticed the moderating effect of the dam on Lake Ontario water levels.
I do not agree with your concluding comment. It is my understanding that water quantity into the Great Lakes is increasing and Plan 2014 (in part to stop regulating Lake Ontario water level as before) was implemented by international agreement. Seems the security provided by water level regulation is becoming too costly to continue, including replacement and upgrades of the dam.

There has been work on the dam to partially compensate for cracks in the concrete. I believe that the repairs were supposed to have been completed years ago but I haven’t seen a recent update on their progress.

I don’t understand why water level regulation is now too costly; the value of regulation (among other benefits) justified the cost of building the dam 60 years ago. At worst they could simply leave the sluices fully open which would eliminate flooding in Ontario. Of course those who live near the water around Montreal might be unhappy!

Additional information on Plan 14 and the IJC is available at http://unitedshorelineontario.ca/

According to United Shoreline Ontario, Ontario did a poor job in negotiating and as a result Ontarioans got the smelly end of the stick compared to the benefits that Quebec and NY obtained.

“It’s hard to know if it has peaked but it probably has.”
Or maybe not.
The International Lake Ontario – St. Lawrence River Board predicts that Lake Ontario will peak in the last week of May or the first week of June at 75.74 meters above sea level, which is below the extreme highs of 2017. Heavy rainfall over the Lake Ontario or Ottawa River watersheds could push water levels higher.
The Ganaraska Conservation Flood Warning for the Lake Ontario shoreline will be in effect through Monday, June 3rd, 2019
The City of Belleville Emergency Management committee met Friday morning to receive lakefront water level updates from Quinte Conservation.
The updated forecasts predict an additional 10 centimetre increase over the coming week. Peak levels are anticipated between May 31 and June 7 with projections citing at least 2017 levels or slightly higher.
It seems that flooding will become common with global warming and more rain.
Cobourg can be pro-active by encouraging or requiring:
Commercial property adaptation audits so commercial property owners evaluate and prepare for flood risks.
Home adaptation audits so homeowners evaluate the risk of basement flooding and prepare for it.

Why not prevent flooding by proactively lowering lake levels early in the Spring rather than allowing levels to rise and then doing nothing?

Good question, Dubious.
But that is exactly what the International Joint Commission has been doing.
Last fall and this winter, the IJC has been pushing an “extremely high” flow of water downstream through the dam at Massena, N.Y.
“And yet during that same period, late November, early December, Lake Ontario was rising,” according to a spokesman for the IJC. “I think what this shows is that the system is more sensitive to the water supplies coming in to the lake than it is to our ability to regulate the outflow.”
Seems that there are no simple solutions to the problems caused by climate change.

Or send in the Dambusters?
Nah!
“Other than a brief pause, to allow ice to form on the St. Lawrence River in January, outflows have generally been increasing since October 2018. This followed many months of very high outflows that go all the way back to the extreme high water event of 2017. Today the outflow is 8,700 m3/s (307,200 ft3/s), which is one of the highest outflows for this date since 1960.” IJC
Can’t fool Mother Nature, old sport!
Hah! By sheer coincidence, I received advertising for a metal flood barrier in my mailbox on Friday.
http://www.floodcontrolinternational.com/PRODUCTS/FLOOD-BARRIERS/noaq-boxwall.html
Next big thing for lakeshore homeowners.