Around 1:20 am on the day after election day, results indicated that Justin Trudeau would be leading a minority Government with 156 seats against the Conservatives with 122.  Since that was fewer Liberal seats than in the last parliament, it meant that some Liberal MPs lost their seats and our local Riding MP Kim Rudd was one of them.  She lost to Conservative Philip Lawrence.  The Liberals planned to celebrate a win at a hall in Port Hope but it didn’t happen – Kim didn’t show by 11:10 so I left to join the Conservatives who were having a party.  One of those celebrating was MPP David Piccini – see the photo.  The numbers Tuesday morning were as shown below.  Also below are a couple of photos at the Conservative campaign office on King Street.

The other parties did not do well – the table below gives the results with 294 of 294 polls reporting:

Note that these numbers are subject to final confirmation by Elections Canada.

I can’t help but make observations about the election.

First, I notice that the People’s Party was rejected by the people – their leader Maxime Bernier lost his seat to a Conservative and no other PPC candidate was elected.

Another observation – it’s unfortunate that in our democratic system, it’s not only the MP who loses her job but also her employees.

You can compare these results to predictions based on polling at this page. 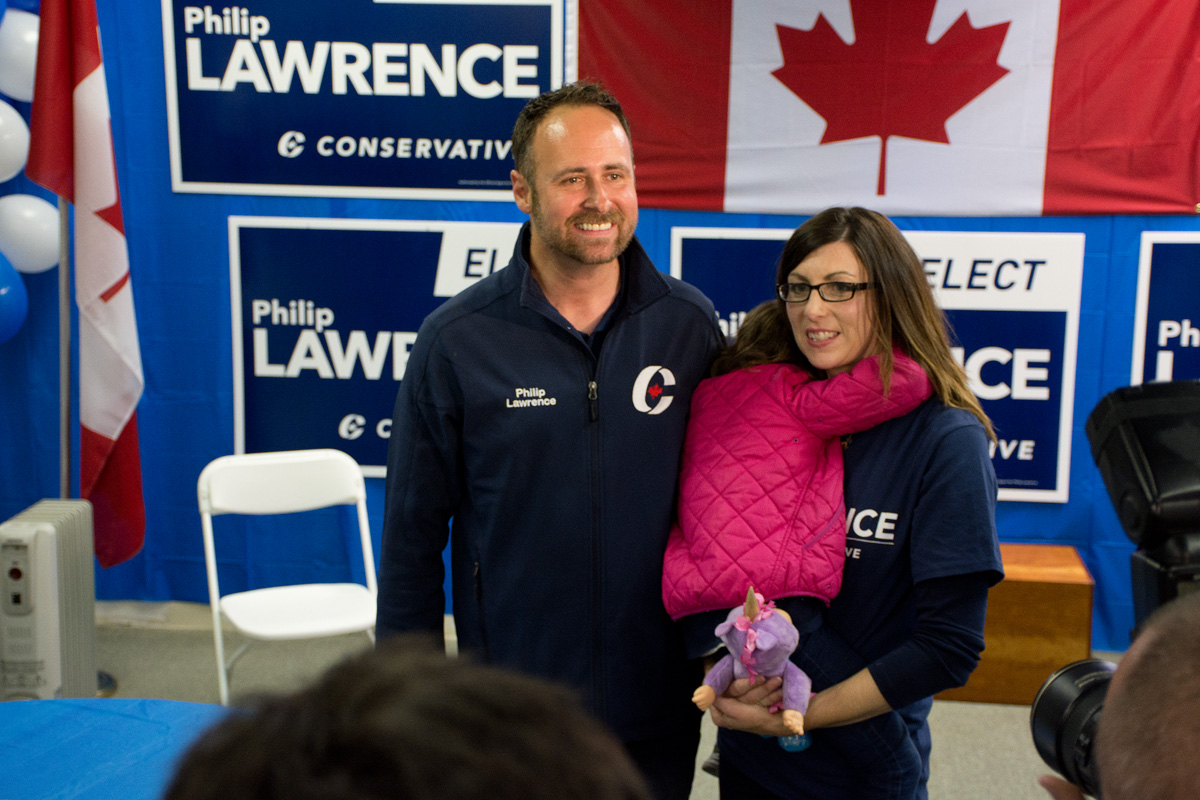 Philip Lawrence with his wife 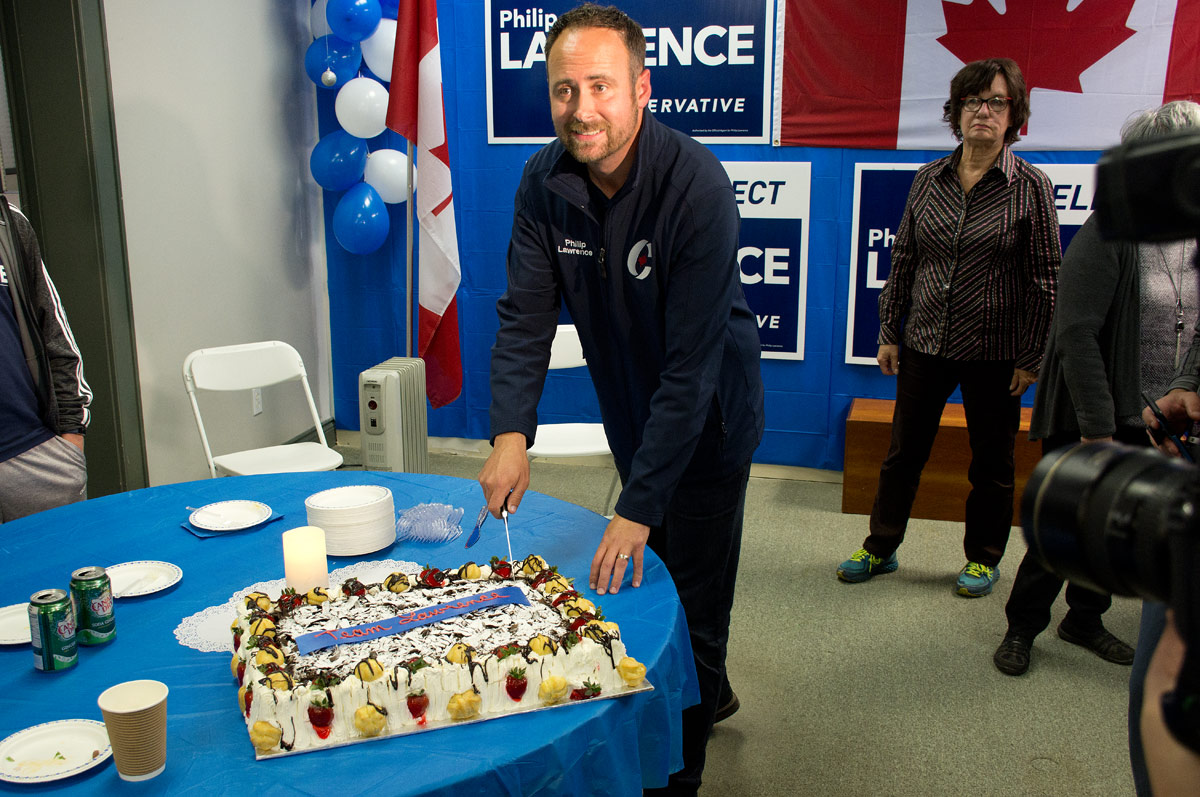 Did anyone notice a photo of our unelected Mayor at Kim Rudd’s Victory Party [?] on Monday nite ?[Northumberland News]
Probably just trying to improve relations with the Feds !

I watched a panel discussion on election night and heard what Rona Ambrose said about online behaviour towards politicians. And, check out this story from today.

it’s beyond me how one person can fairly and equally ‘represent’ a full spectrum of citizen voices as we expect of our elected politicians. In my view, personality becomes the enabling force and a big part of the whole process, whether we like it or not. We identify with and are attracted or repelled by the personalities involved. Realistically, we elect the ‘person’ based on personality and/or the ‘party’ based on policies. It may be politically correct to admonish those that attack personalities but attacking personalities is as much apart of politics as attacking policies, the two are intertwined and denying it is just simple idealism.

Lets hope our new Conservative MP makes keeps his presence known as Mr Piccini does. (you are a excellent representative Mr.Piccini) Mr. Lawrence is still a stranger to many, (l remember George Hees on Saturdays on the main street in the summer – shaking hands and kissing babies nough said-

George Hees was a tall handsome man, suave, etc. He was the first politician I ever met. I might add that MP Allan Lawrence was unrelenting in his pursuit of justice for me during his time as MP. I hope our new MP Philip Lawrence is up to those same high standards.

Congratulations Philip Lawrence on your victory and now a new MP. It is unfortunate that your party with more votes than new minority government received will not be heading up the new government. Lets hope Mr. Dress-up and Mr. Jump-up do the right thing for Canada with their major focus on growing jobs, infrastructure and GDP.

I was agreeing with you until you got to your last sentence. Isn’t it time to stop the constant trashing and belittling of people with whom we disagree. It makes us small human beings….

Any party that puts Climate Change above the 3 Majors that I mention here deserve some degree of thrashing.

Those are your 3 majors.

Attack the policy and you might make some sense that will change some opinions. Attack the personalities and you create conflict that only increases the politics of bitterness. Use intelligence or create animosity. Just sayin’

Excellent advice. Too bad all party leaders failed to heed it during the election.

A lofty sentiment, indeed.
I am not aware that any epithet was attached to Mr. Scheer, apart from his supporters not being able to spell his name.
Mr. Trudeau has been called PB (Pretty Boy) Mr. Dressup, racist etc.

give it time Walter, …no one is immune, …no one

Outside of Alberta and Saskatchewan (where they had the huge majority of votes……thus the popular vote lead), the Conservatives did not do well. That’s why they lost. If we are going to base our elections on popular vote then Joe Clark would never have been Prime Minister (Justin’s father, Pierre, received over 400,000 more votes in 1979….but Clark’s Conservatives won more seats and formed a minority government).

He won with the same percentage of vote that his party LOST WITH last federal election. He had no more support than PCs did 4 years ago, and his victory is owed entirely to some NDP and Green votes opting not to vote strategically.