From Monday 26th of August through Wednesday 28th of August, a film crew was in town shooting parts of a new Netflix series, Ginny & Georgia (more below).  Since the story was set in “the charming New England town of Wellsbury, Massachusetts” (which doesn’t exist), Cobourg had to look American with lots of American flags and even a US  Post mailbox.  The script required a drive through the Town and I learned how movie producers do this realistically – see photos below.  There was minimal disruption of downtown – mostly just some temporary loss of parking space – but “approx. 100 actors (I think they meant total number of people) and 40 trucks” were said to be in Town so there would be a significant economic benefit.

The new Netflix TV series includes 10-episodes for “Ginny & Georgia,” a mother-daughter coming of age series featuring Antonia Gentry and Brianne Howy (“The Passage”) who will play the daughter and mother. “Ginny & Georgia” centers on Ginny Miller, a fifteen-year-old who often feels more mature than her thirty-year-old mother Georgia Miller. After years on the run, Georgia wants to put down roots in the charming New England town of Wellsbury, Massachusetts and give her family a normal life.  For Ginny, that means navigating a prestigious school, rising popularity, and complicated love interests.

Although 6 filming locations were named (e.g. Audrey’s, Lawn Bowling, St.Peter’s) the main noticeable impacts were the American flags, pylons and no parking signs on King street and the loss of half the Albert Street Parking lot.  Cobourg Police no doubt helped but the most noticeable Police presence was provided by two Port Hope Police cars which escorted the film crew on their runs through downtown.  I managed to capture what was probably a test run along Albert Street – see the photos. 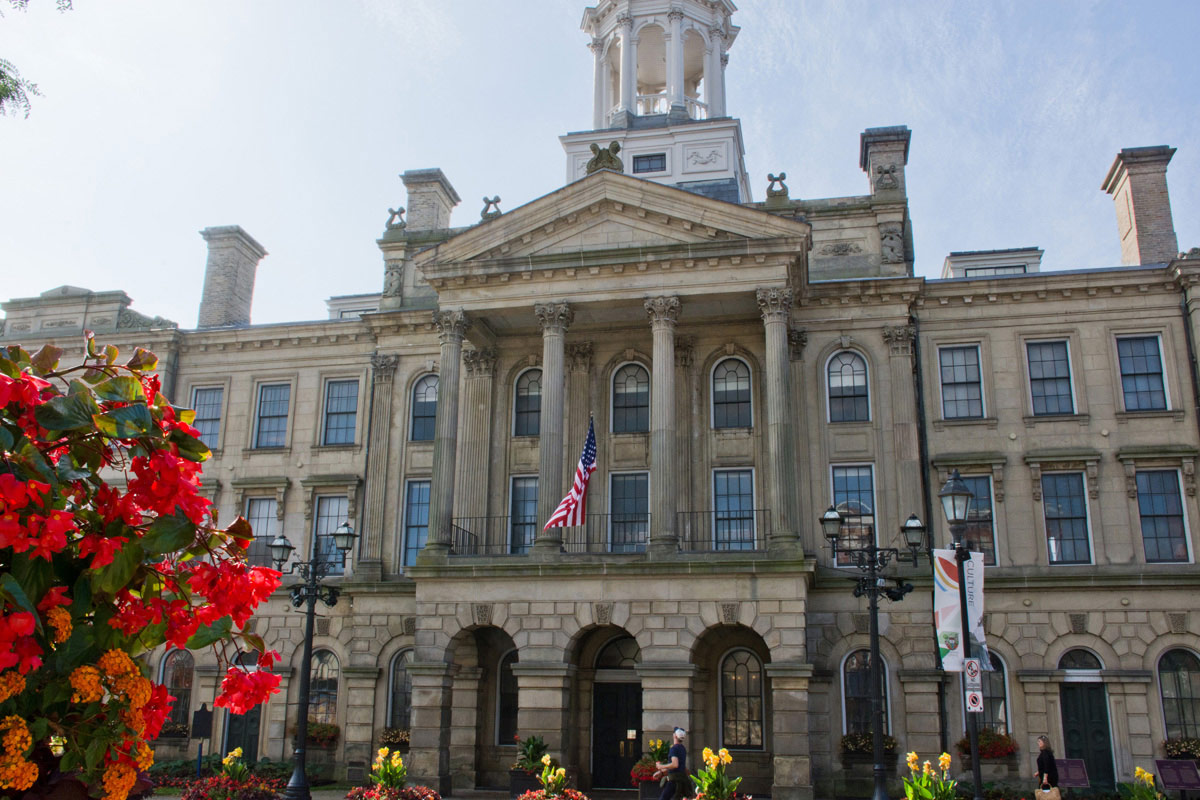 US flag on Cobourg Town Hall 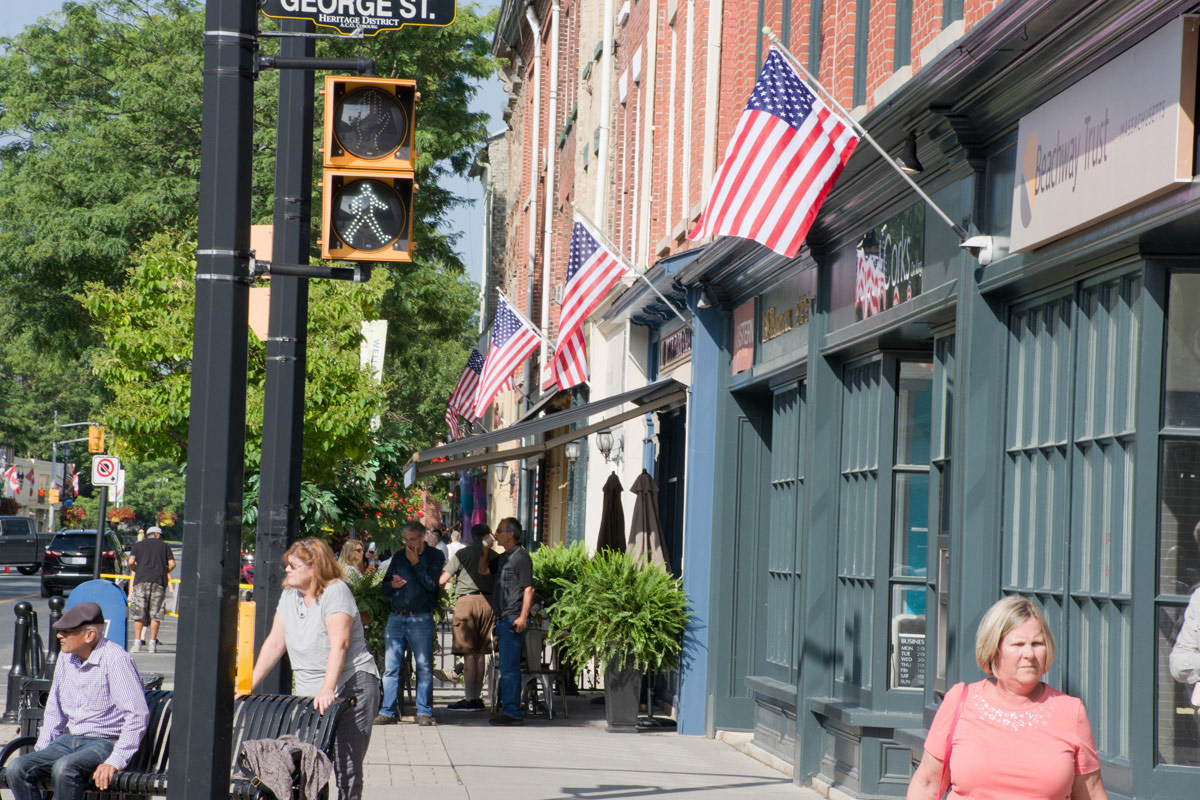 Lots of US Flags all over Downtown 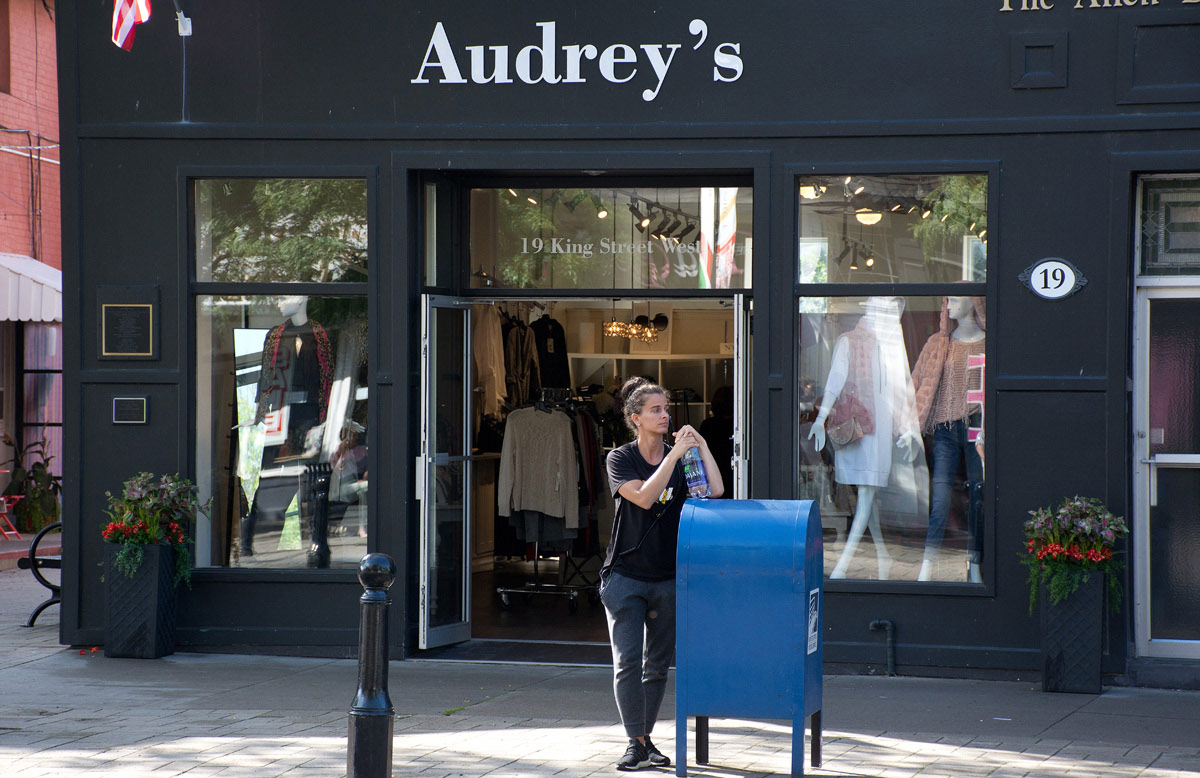 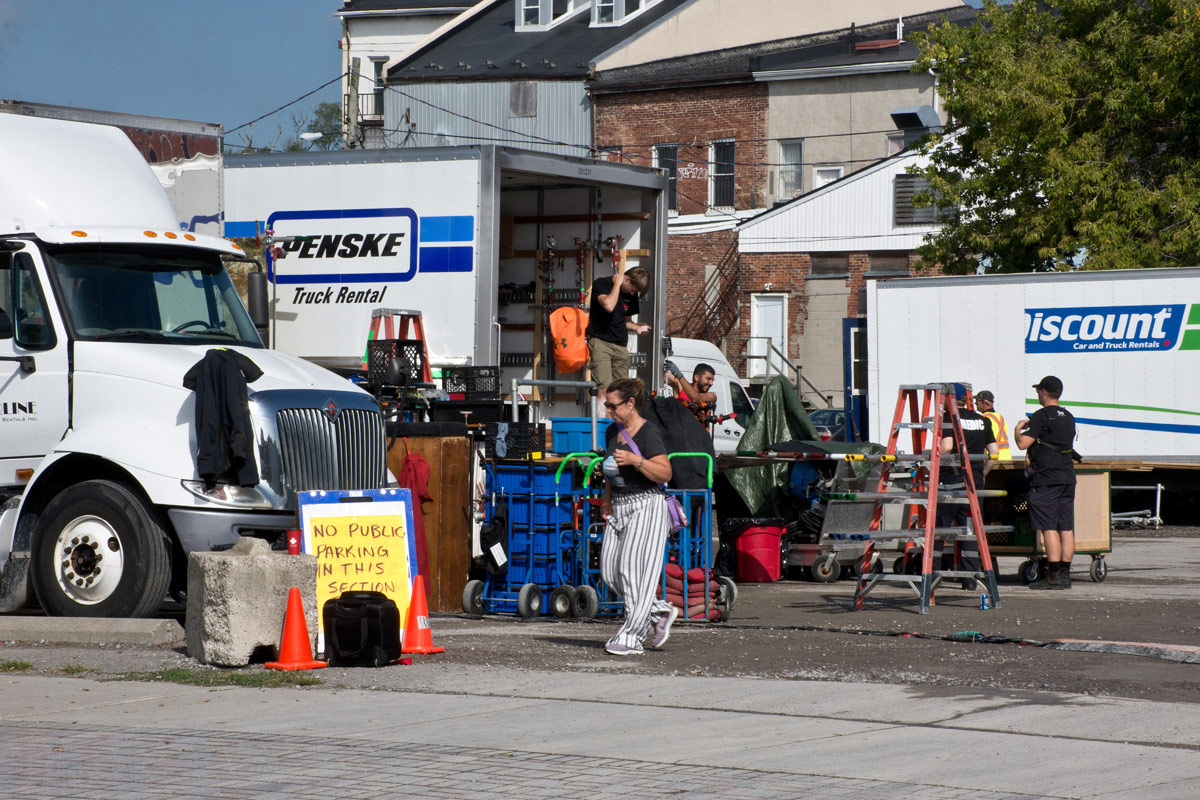 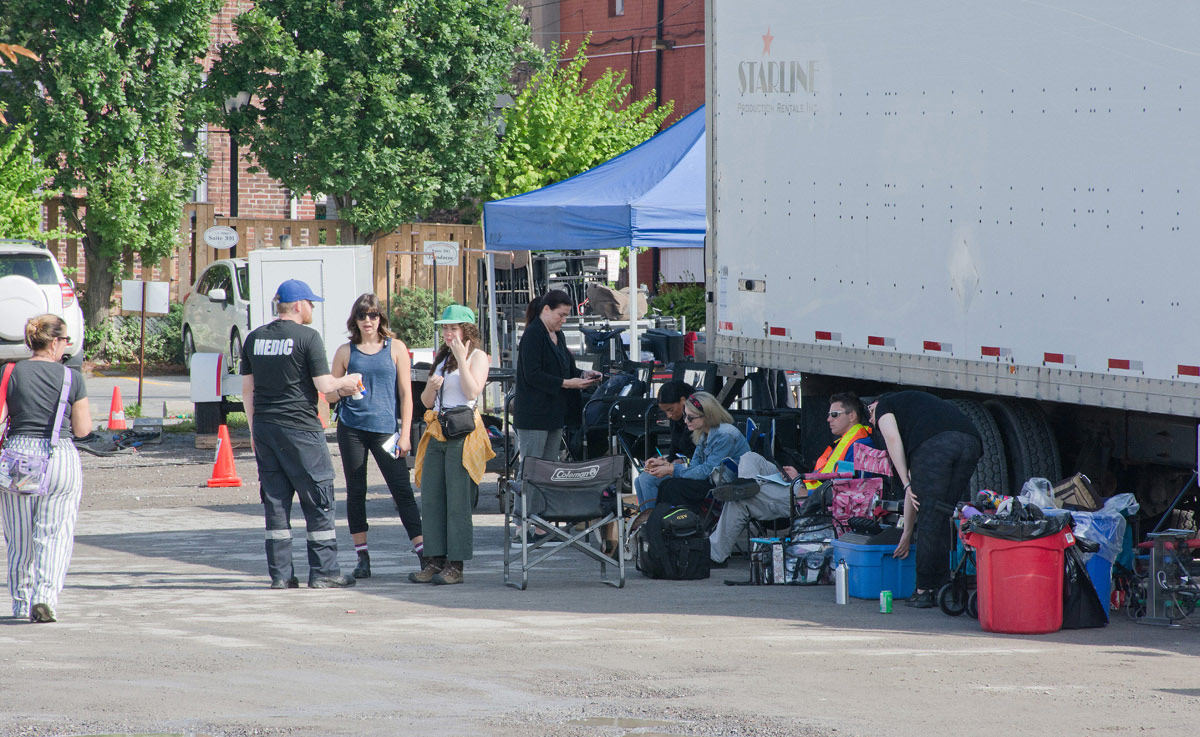 Are these the stars of the show talking to the Medic? 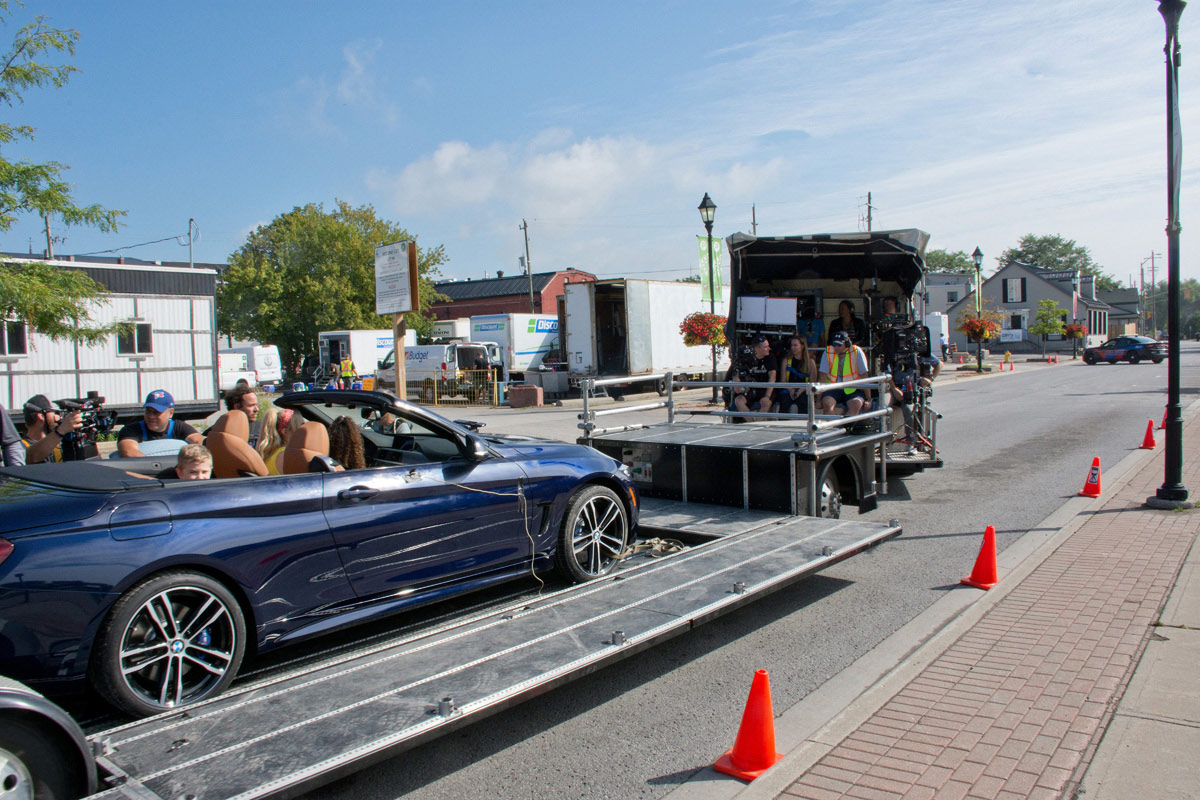 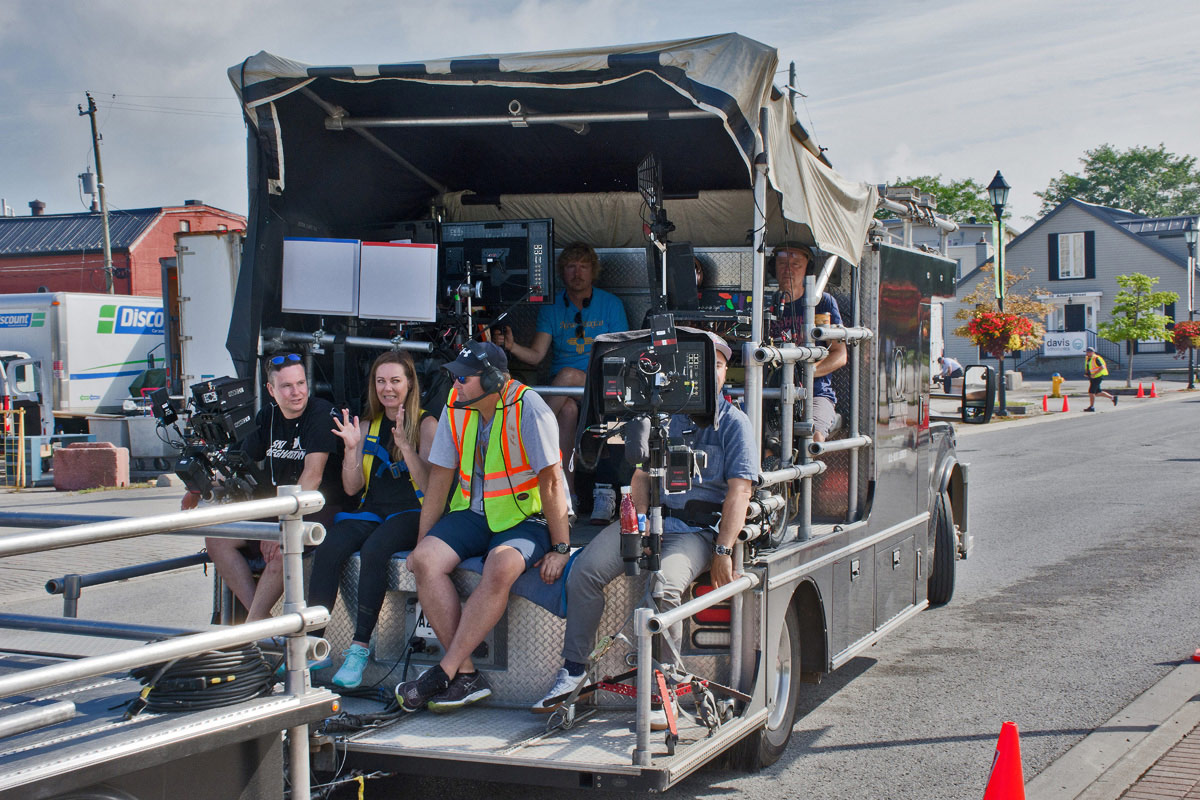 Is that camera pointing at me? 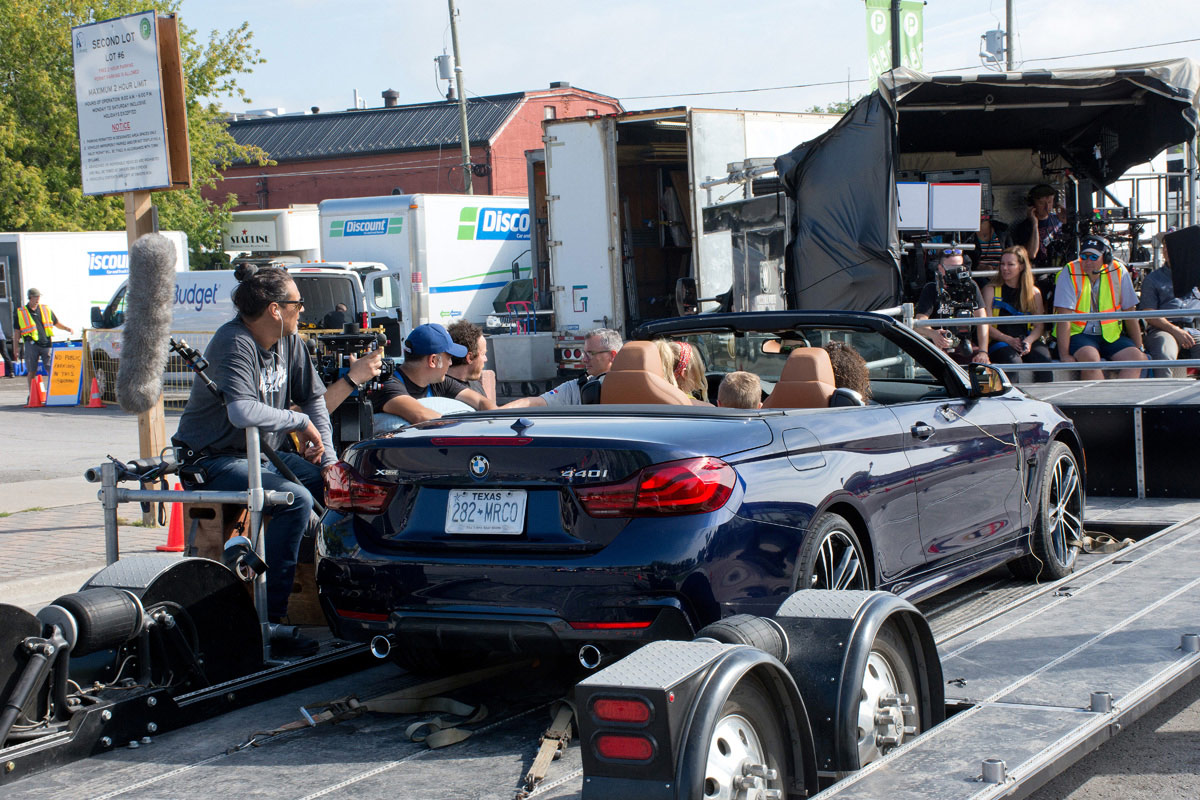 I hope Cobourg received at least $30,000 for the use of our town. Does anyone know the fee our town charges for “Movie Location”?

When Murdock Mysteries was filming in Cobourg, in addition to whatever monies went to the town, their filming on my store’s property resulted in them paying me $200 directly.

The movie, Viola, paid me directly to use my trike, enough to fly me out to Vancouver for a few days to attend the release of my video, Textual Assault Placards, at the Visible Verse Fest.

Thanks Dan & Wally for your information…so now it’s up to our new Mayor to comment either here or soon to the Northumberland News on the financial benefit to our town from Netflix. Still waiting for the “Trip Report” from his China trip with our previous mayor Gil B. that was apparently paid for by the owner of the new private school now run at the previous Cobourg West High school.

You are insufferable. I knew you, dubious, or a likeness, would be in here finding something to complain about like you always do.

You’re jumping all over Dubious but he/she hasn’t even commented on this specific post.
Cornbread’s questions on how much the Town received for the filming and why the Mayor’s promised report on his paid-for China trip are neither negative nor complaining as you assert. They are reasonable questions that deserve an answer. Certainly there is nothing to hide.

Agreed. What is negative about expecting to see promised information?

According to the Fees and Charges Bylaw 046-2019, renting streets is $500 + Paid Duty Police at $67.66/hour + 20% administration fees (Minimum 4 hours). For locations such as beach, bandshell, marina, piers, trailer park, Council chambers, court room and “outside grounds” the charge is $500/day. The charge for renting parking lots is “to be negotiated” with no indication of the typical cost. See https://cobourg.civicweb.net/document/167548 for the full details.

A ‘thumbs down’???? Obviously someone doesn’t like, or unhappy with the rates, data and reference information being provided.

Two more people have filed nomination papers for council. Lucas Cleveland (co-owner of Market & Smor) has filed for Mayor and Randy Barber has filed for Councillor.   All info available is here.

Please do not use a name already in use.  Such names will be edited and you risk having your comments deleted.

August 10 – The Town of Cobourg has added a survey asking if we need more outdoor Pickleball courts.