Everyone I spoke to commented that it was a perfect day – sunny and warm but not too hot – and a breeze helped.  And it seemed that many people agreed since the beach was packed and the Downtown Sidewalk sale was busy – at least one vendor said it was the best yet.  The point of these events is to boost downtown business so we’d hope they did well. I’d guess that we had more visitors than even the Waterfront festival.  The Sidewalk sale was a four day event – Thursday to Sunday on King between Division and Spring; the Sandcastle competition was only Saturday – so I checked the event out on Saturday, around noon. I’m glad I could walk to King Street and the beach since parking was at a premium – a lot of people did a lot of walking.

Below are some photos and a video to give some idea of the crowds. The video is about 10 minutes and the photos add some highlights.  In the video, look for Mayor John Henderson at about the 1 minute mark.

It’s not apparent that the Town was 100% ready for the number of people who came. There were lineups for food, icecream and washrooms – but unlike the Waterfront festival, no extra washrooms were provided. However, the Police were organized. Auxiliary and Special police were on patrol on Segways – I counted three of them (Segways that is – there were more officers).

The kids got special attention – there were attractions not only on King Street (see the video) but also in Victoria Park – which was crowded with overflow from the beach.  Unlike 2017, the Lake level was not a problem – the beach looked to be at its full width.  I thought there were fewer amateur sandcastle competitors and the professional entries were not as impressive.  The most photographed was the one above right.

Photos of the Sidewalk Sale and the Sandcastle Competition 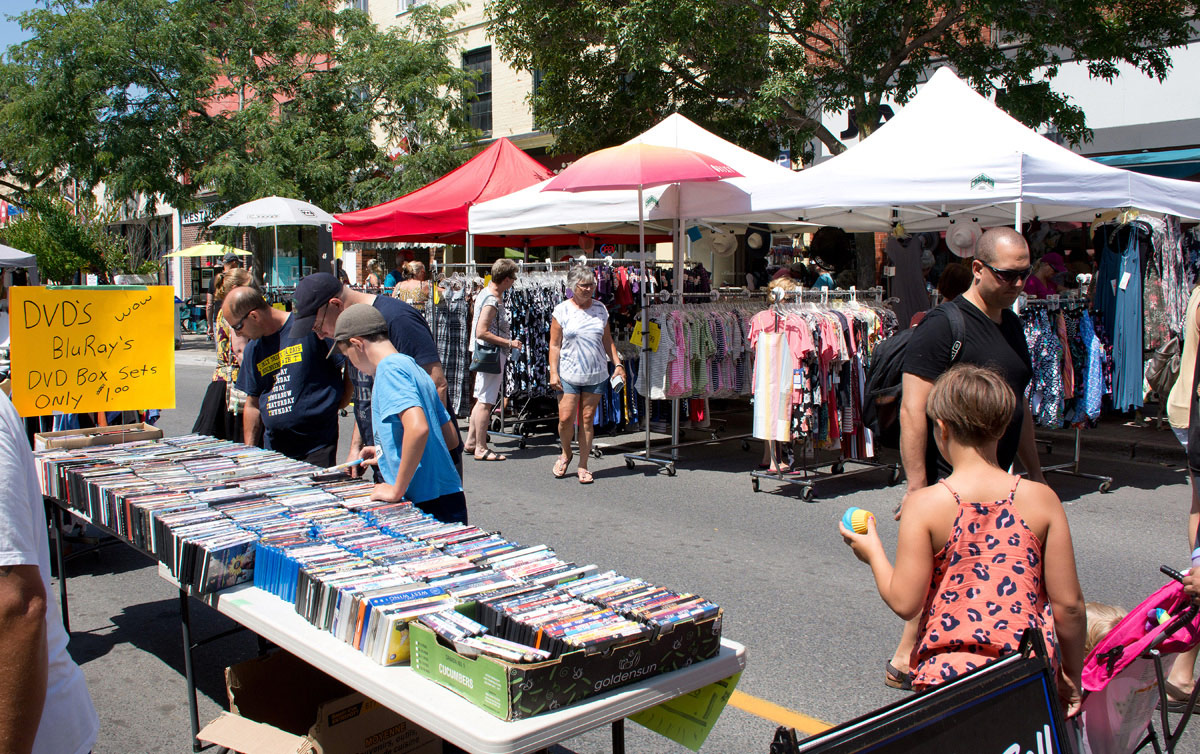 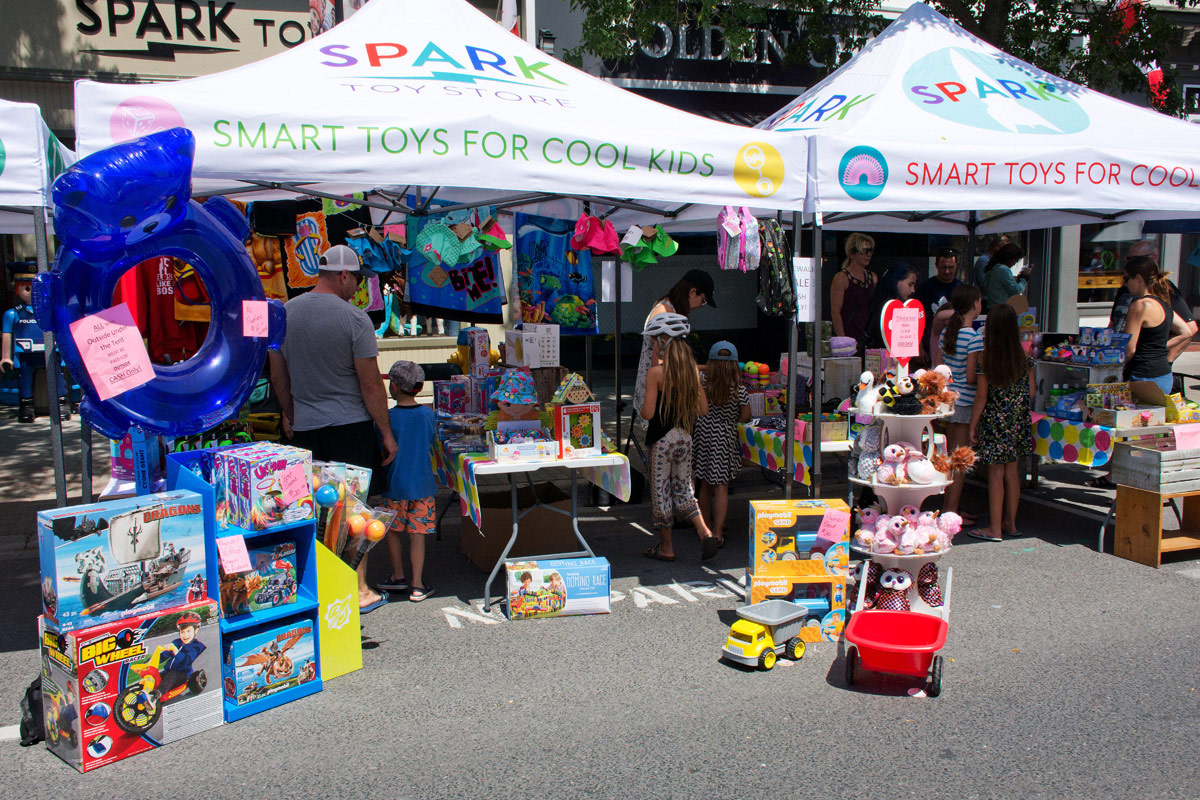 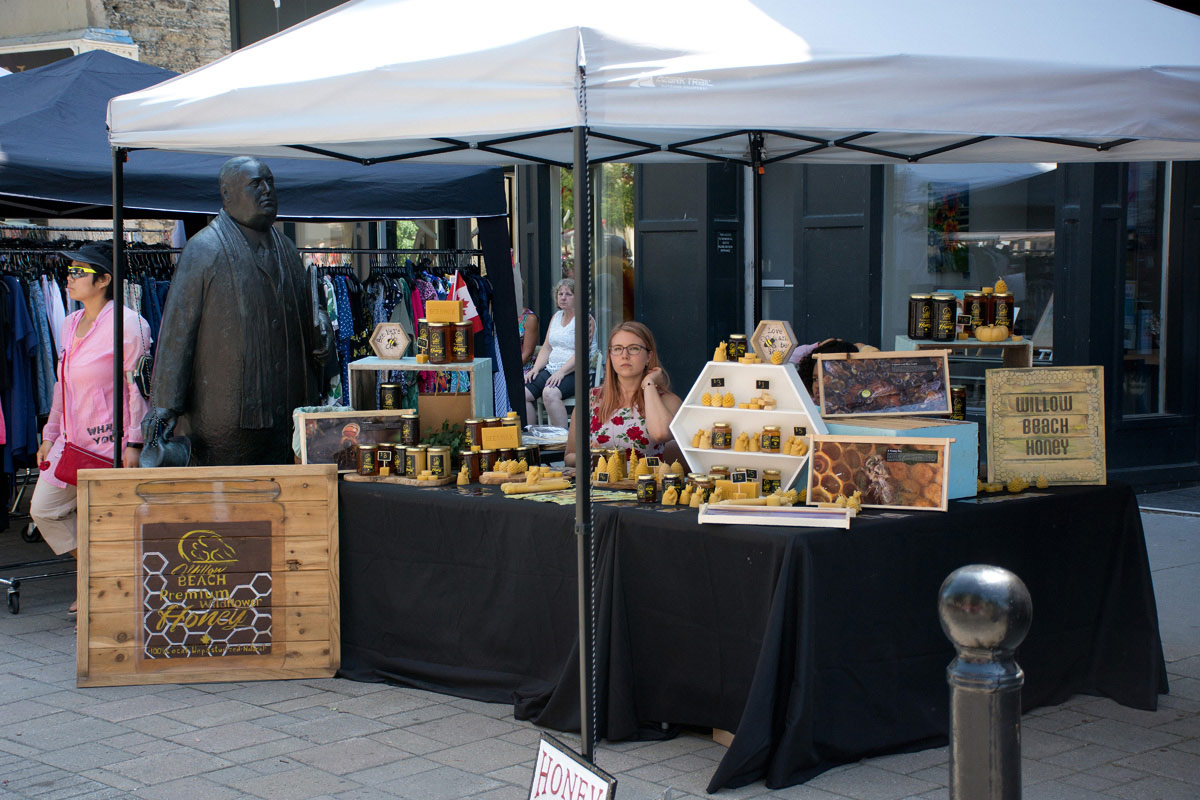 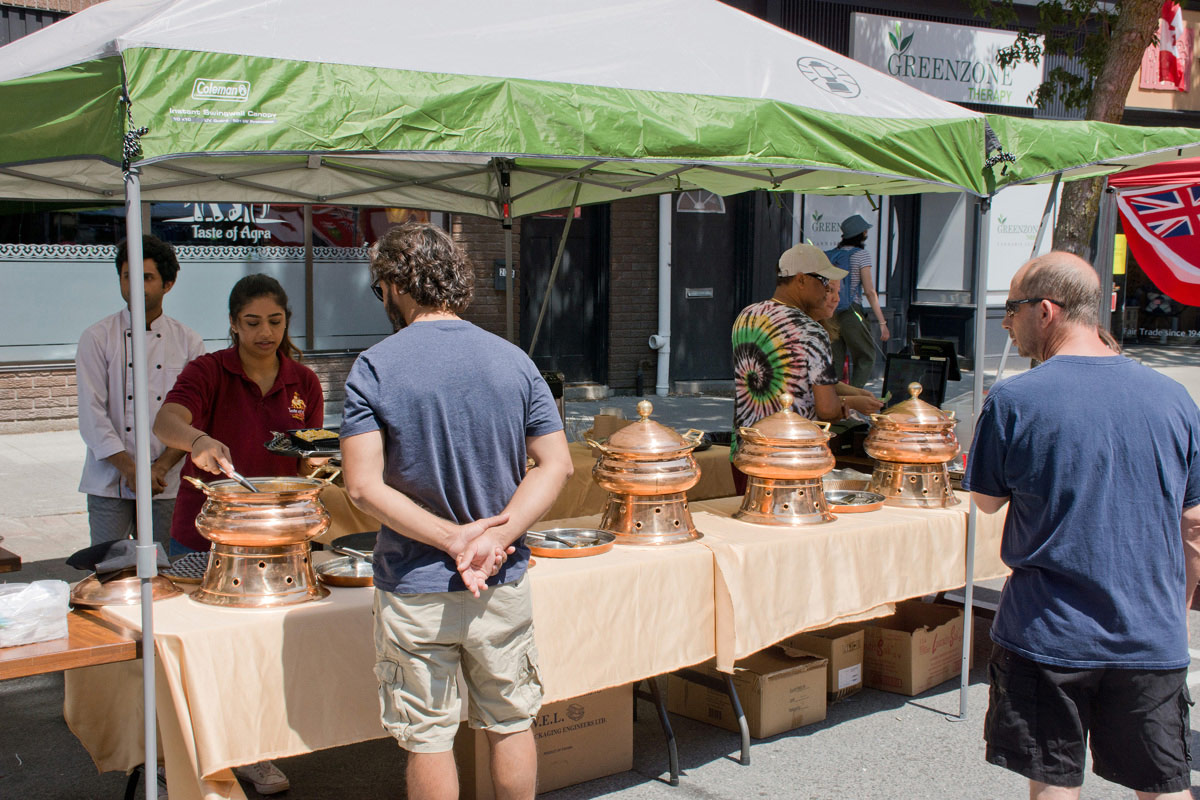 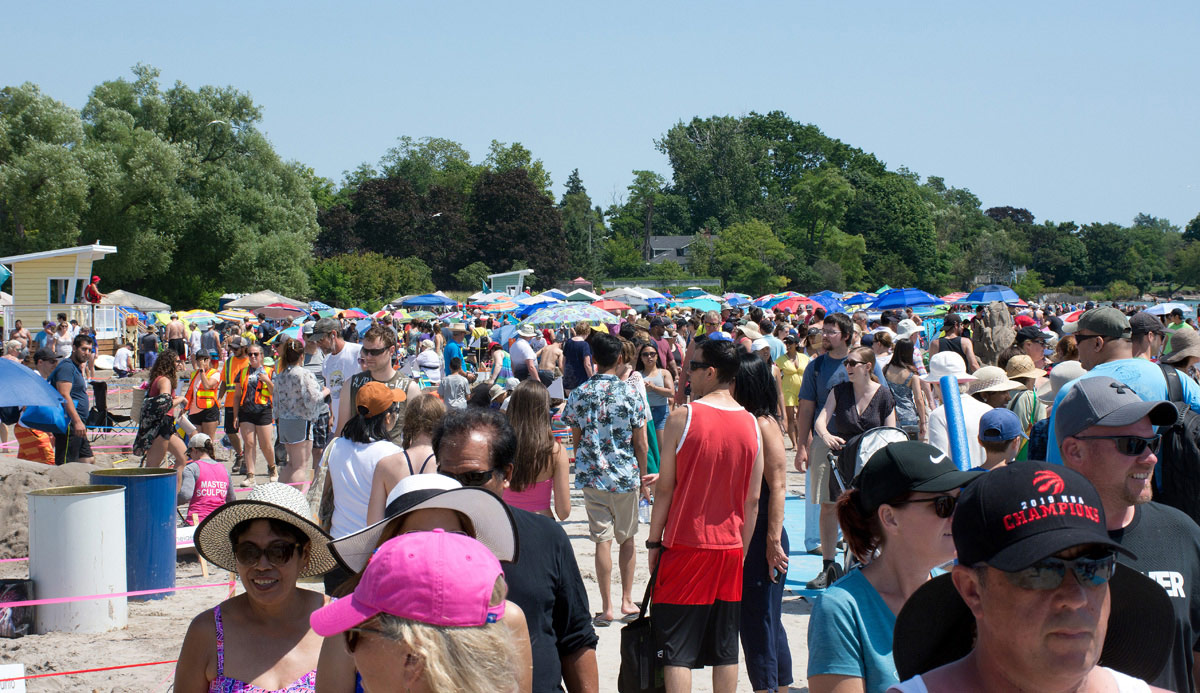 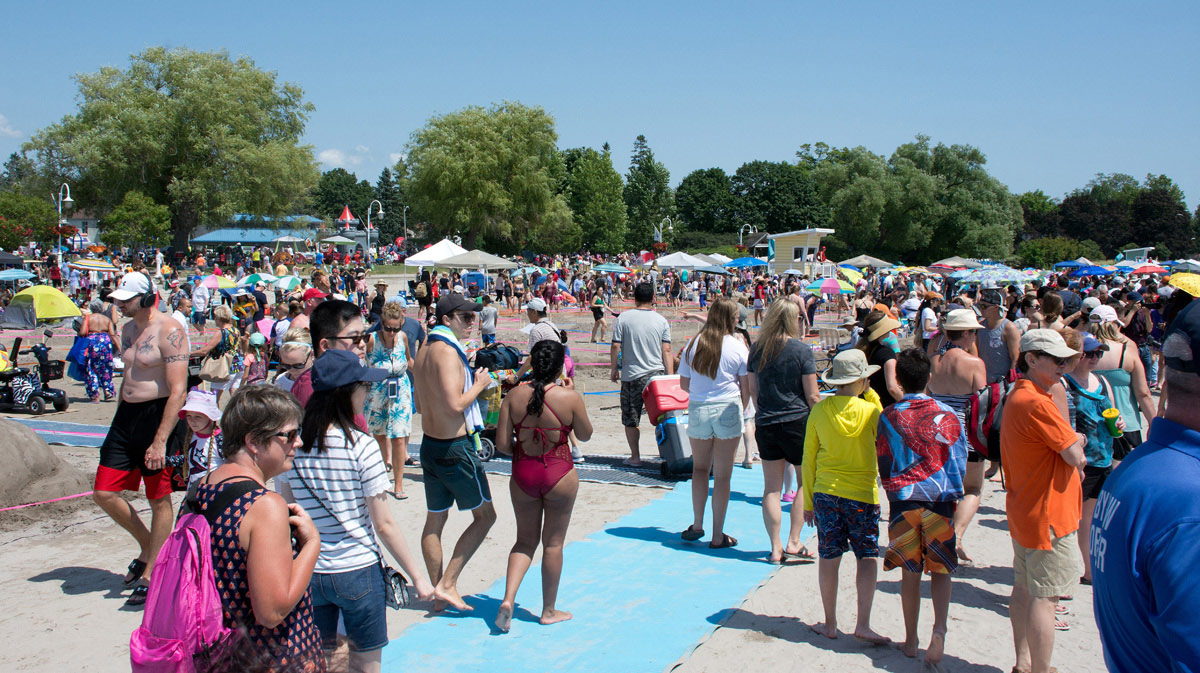 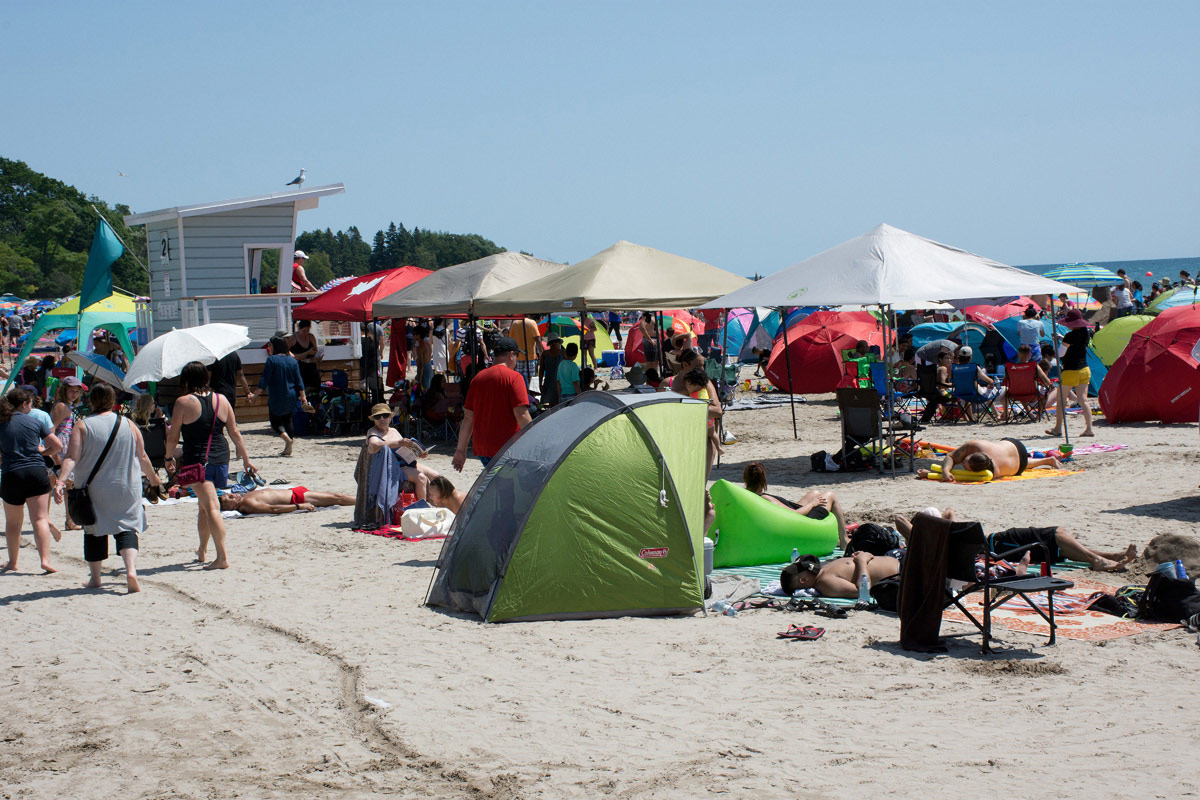 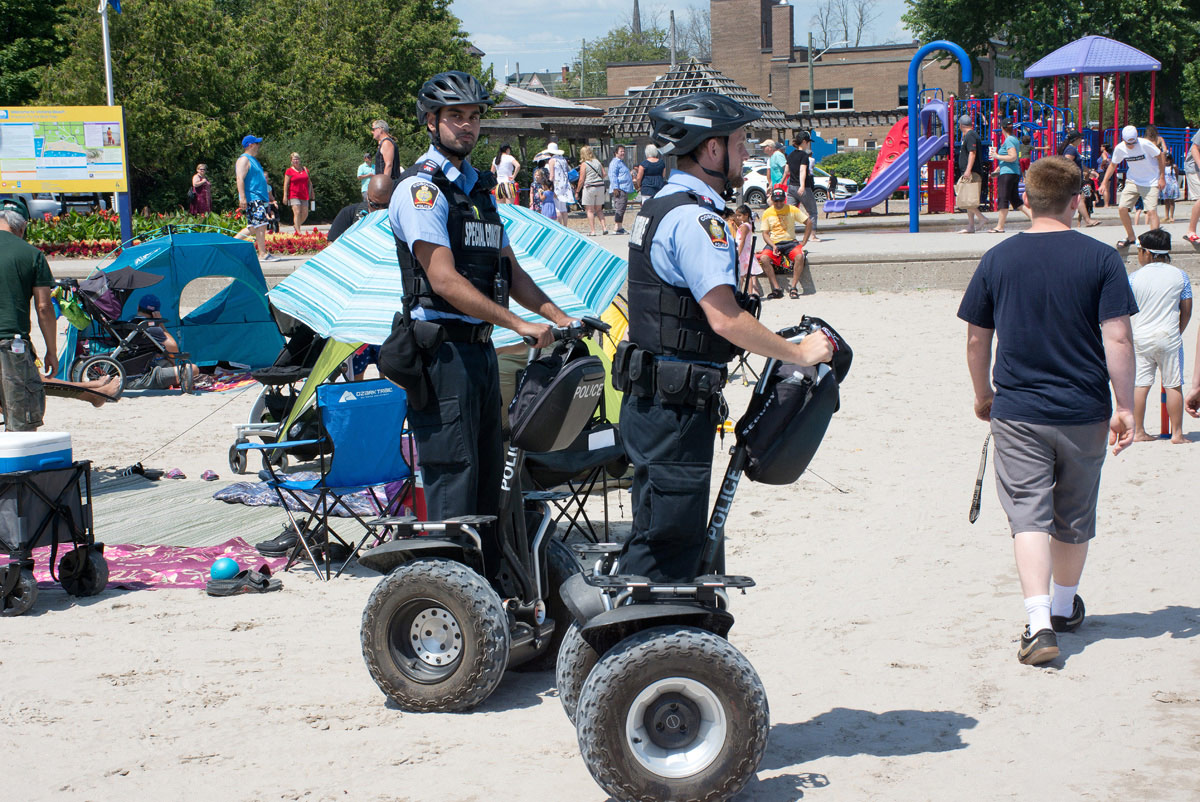 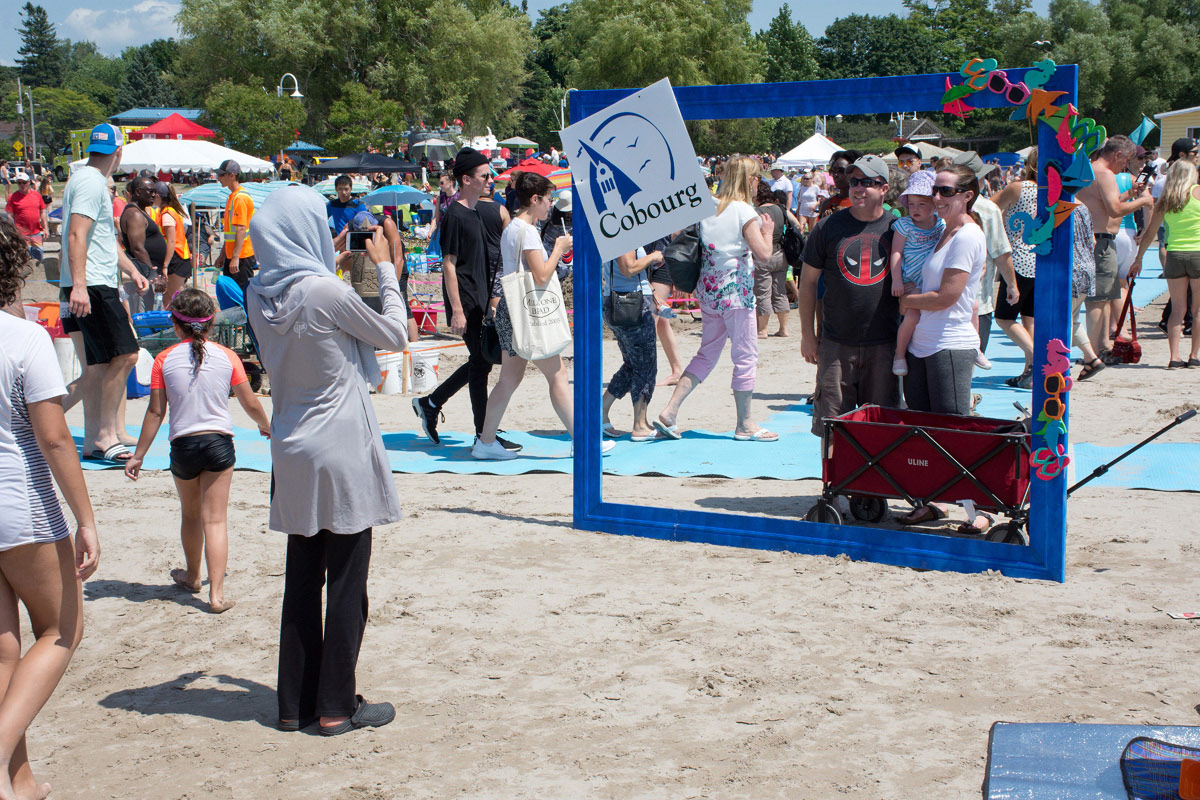 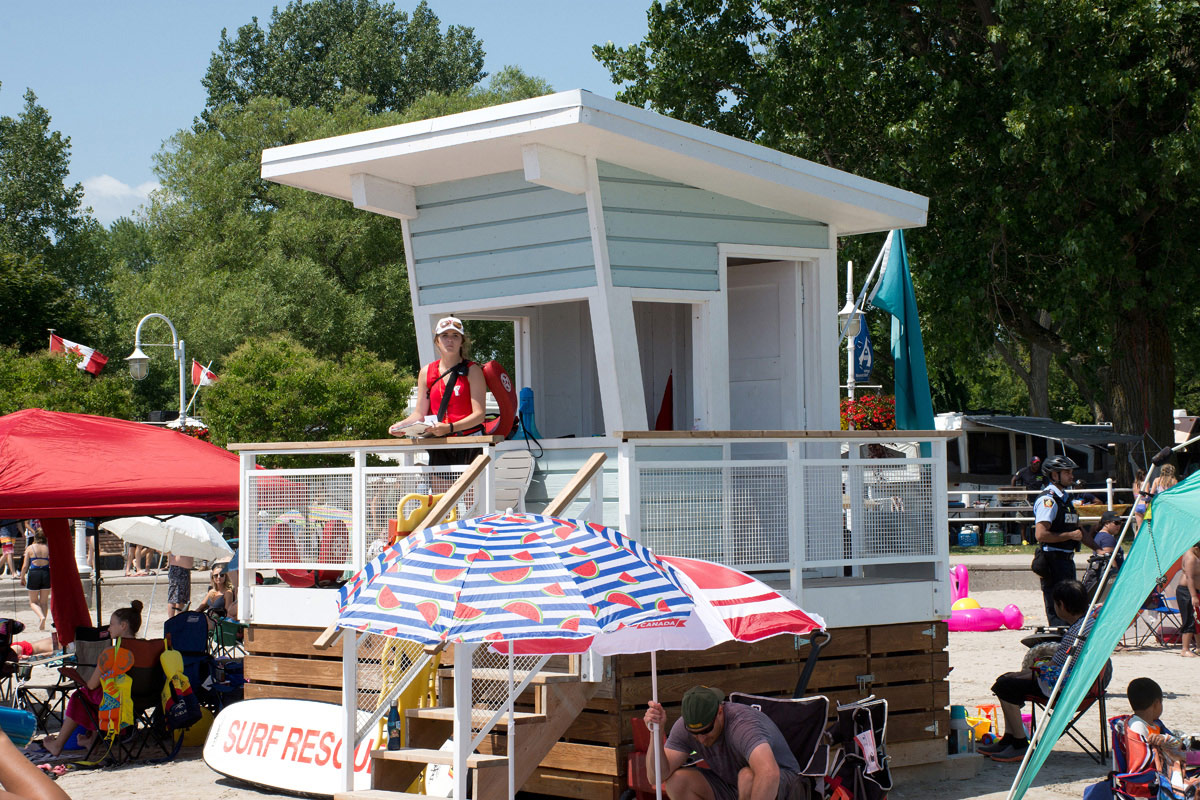 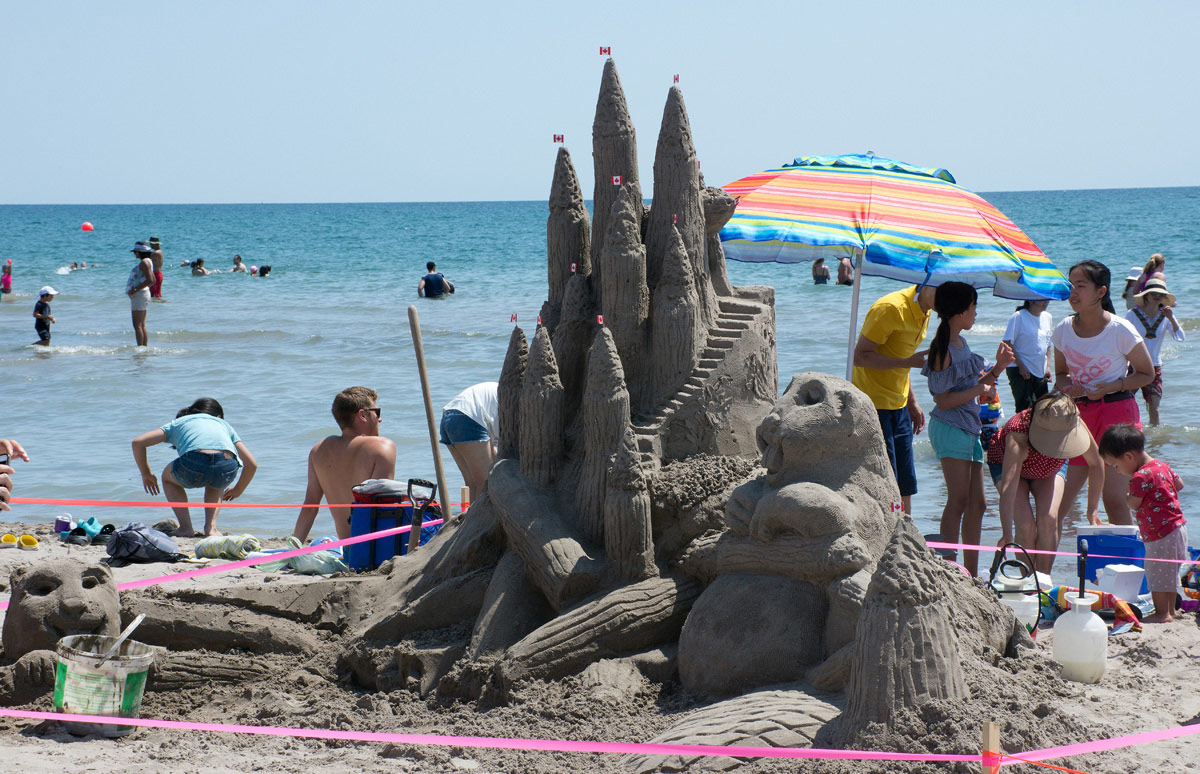 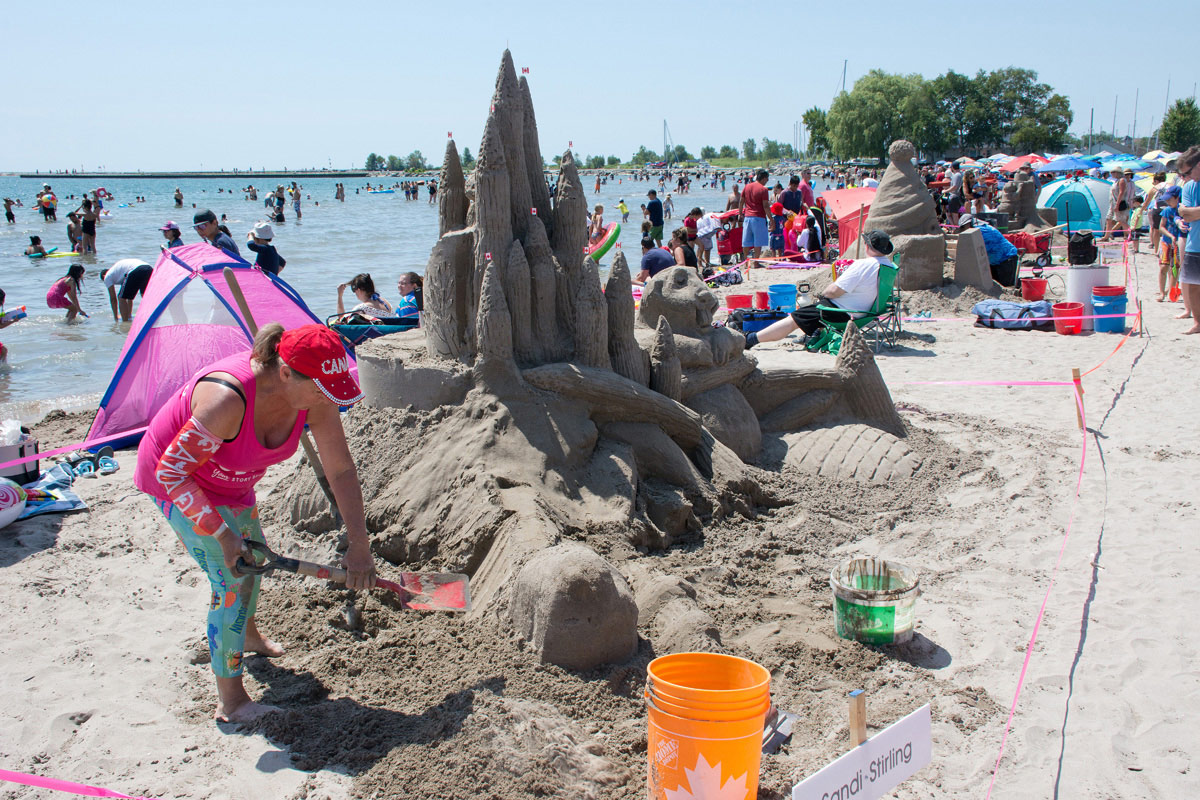 “Our cadre of visitors roll into town with pockets full of cash, use and abuse the beach and park, and leave at the end of the day as cash loaded as they arrived. ”

I’m sure this point has been hammered to death but for what it’s worth, I’ll kick in my two cents. I’m delighted to see our Cobourg Beach and Victoria Park so crowded on summer weekends. We are certainly a popular spot. But I can’t help but think that we Cobourgians are being had. Our cadre of visitors roll into town with pockets full of cash, use and abuse the beach and park, and leave at the end of the day as cash loaded as they arrived. Surely we can tap into this vast income stream more effectively and maybe even lower our taxes. More and better town-run food concessions, leisure rentals (small pop-up tents, coolers, inflatables) and certainly parking facilities. End of rant. Cheers!

The obvious question here is – does the commenter pay for his tourism in his own travels or does he just “abuse” the places he visits? Can he supply a model of his own question – in other words where has he found such a municipality that ‘mines’ visitors?

Quite frankly I do not expect to find any downtown merchant disappointed with the weekend’s activities – they made money why should the Town?

All the residents of Cobourg pay a fair portion of their property tax bill for care and upkeep of our beach area and everything involved there like lifeguards, extra policing etc…About time the town put up a fence and a couple of nice admission gates and start an admission fee for out-of-towners who come and use and sometimes abuse to our great facility. This is a real opportunity for user pays to kick in. Also, I believe Doris has a very good recommendation for our beach.

Blocking off the park and charging for anybody who isn’t “from around here” seems pretty xenophobic. Can people from Port Hope use the beach for free? Baltimore? The parts of Hamilton Township that everybody thinks of as part of Cobourg? Where’s the border?

I love comedy. I’ve seen a lot of admission gates in my lifetime but I have never encountered “nice” ones. I’ve seen gaudy ones, derelict ones, spectacular ones, like the Princess Gates at the CNE, but mostly unpleasant looking manifestations. There is a reason why no one has ever approached Town Council to propose such an idea.

The care and upkeep of the beach, trailer park, marina etc. is NOT paid by resident property taxes. It is all paid for by the people who lease moorings and trailer park spaces from the Marina.

Too many large size tents on the beach. We saw two dining tents exactly the same size we use when we camp with people inside all zipped up. I said to my husband are they camping? Those big sun gazebos also take up a large amount of space. Only beach umbrellas should be allowed or very small sun shelters This isn’t allowed on Toronto beaches, takes up too much room

Really enjoyed the Sidewalk Sale but was surprised to see so many people (seniors and kids) tripping on the curbs and the water mains jutting out of the road. Suggest that for future events that orange tape be put on the curbs and orange cones over the water mains so people will see to avoid that area. We must consider as well people that are visually impaired. One part of the sidewalk in front of Audrey’s had a chunk out and again caused someone to trip.

EXCELLENT video John
surprised to see so many tents? thought they were not allowed on the beach?

it’s the attacched ‘enclosures’ that are not permitted, to the best of my recollection

Council has passed bylaws that prohibit a number of things on the beach. As well as no alcohol, there are bylaws that say:

1. No barbeques anywhere in the park.
2. An individual can apply to the Town for a permit to be in the park between the hours of 11pm and 7am.
3. No nudity..

‘The point of these events is to boast downtown business’ and yet the DBIA brings in outside vendors and food trucks. Not sure I understand the logic.

I would imagine it’s because most businesses aren’t food vendors. Many of those we have are full restaurants which is fine, but not grab-and-go like the “hoards” sometimes need.

These fast food trucks help bring people to King Street, so the regular merchants get the spin off from them. On Saturday Pat and Rob’s did a roaring trade with their ice cream – by mid afternoon there was a line-up to the door. I hope they did not run out of their delicious flavours. When not filling ice cream cones, they were making fresh sandwiches to order. I’d say they had a great day.