On Tuesday, May 21, Cobourg and Northumberland celebrated the first “birthday” of Venture 13 and its success.  A year ago, it opened with financing primarily from the Federal Government’s CFDC, the Town of Cobourg and Cobourg’s Police Business unit (see links below for more).  Since then, there has been a large number of companies started, jobs created and seminar/workshops given (details below).  The anniversary celebration consisted of a speeches by John Henderson (Mayor), Kim Rudd (MP), David Piccini (MPP). Paul Vandergraaf (acting Police Chief) and others who talked about what Venture 13 was about and its successes as well as making some announcements.  Included was the demonstration of a simple robot (can you suggest a name for it?) and an open house so you could see for yourself.

Notably absent was the County – although it’s Northumberland CFDC that’s the lead and driving force, it’s more of a Cobourg project judging from participation.

I complimented Wendy Curtis, Northumberland CFDC’s Executive Director, on her achievement but she was quick to point to her team who did so much work.

John Henderson:  Venture 13 moved forward at this speed because of Trust and because of CFDC’s Wendy Curtis

Wendy Curtis:  Venture 13 is part of the Strategy to make Canada “The Place for Technology”.  Venture 13 is a beacon for innovation.  A goal is to “adapt and prepare for the future”.

Paul Vandegraaf:  We are leading Canada in the use of AI for record checks

Kim Rudd:  The jobs of tomorrow are being created here.

David Piccini: People now have an average of 10 jobs in their working life; we must change with the times. 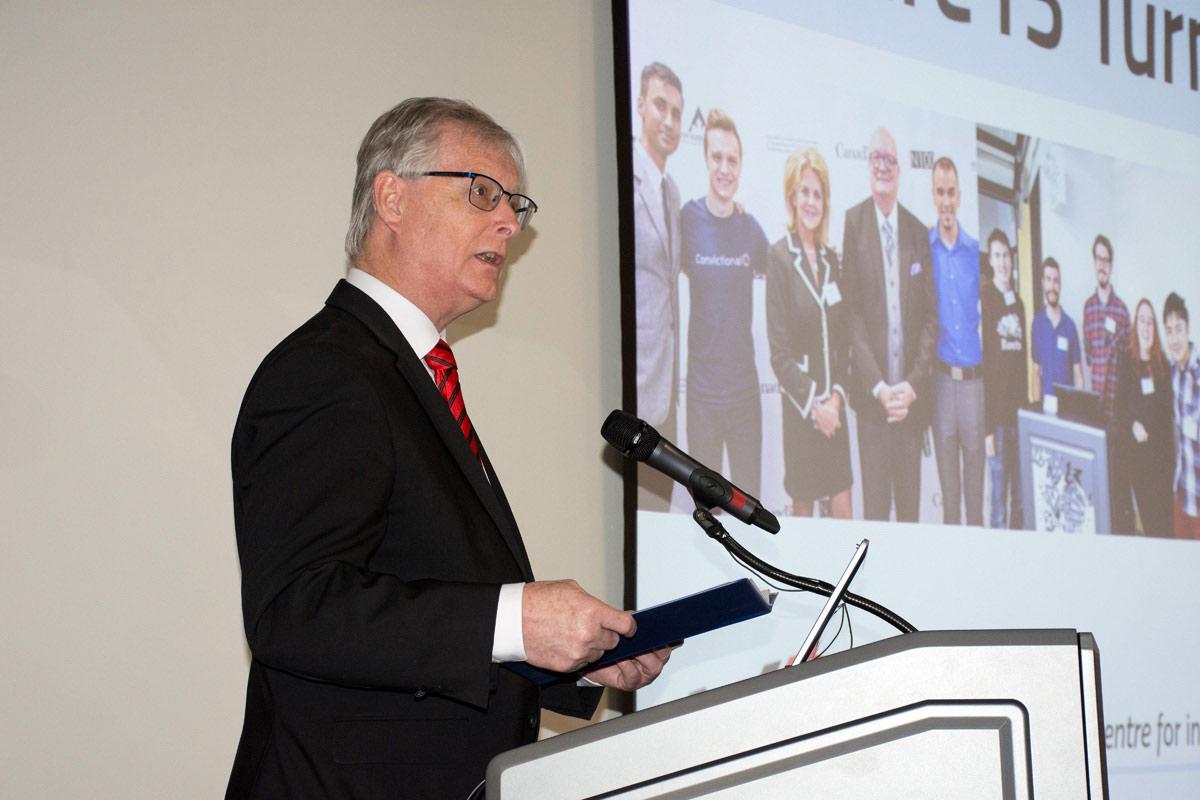 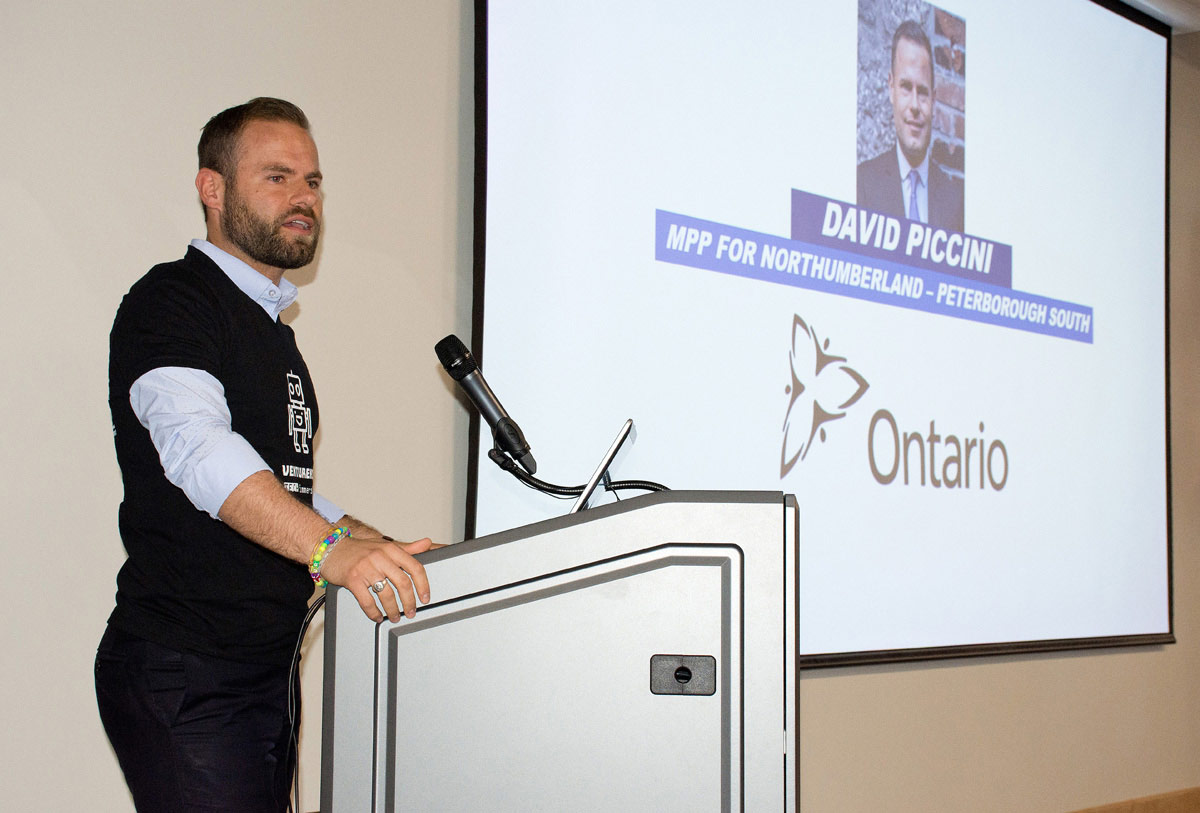 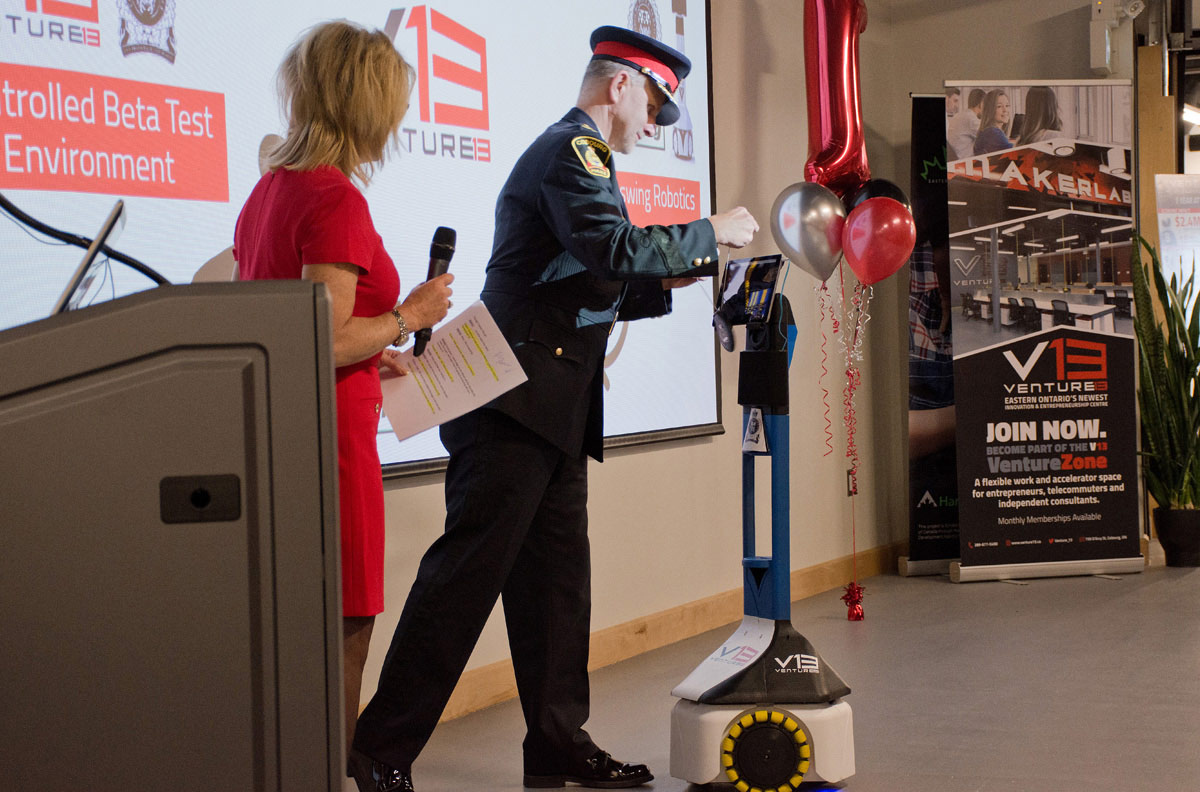 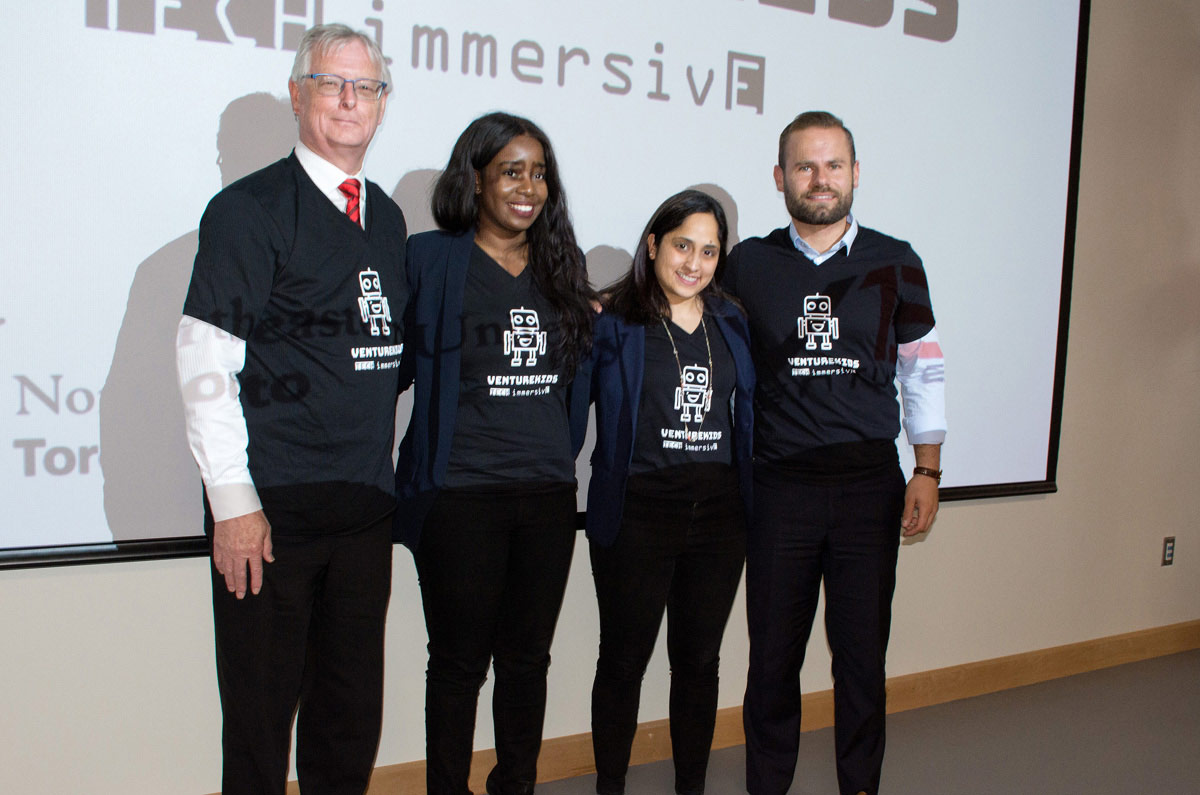 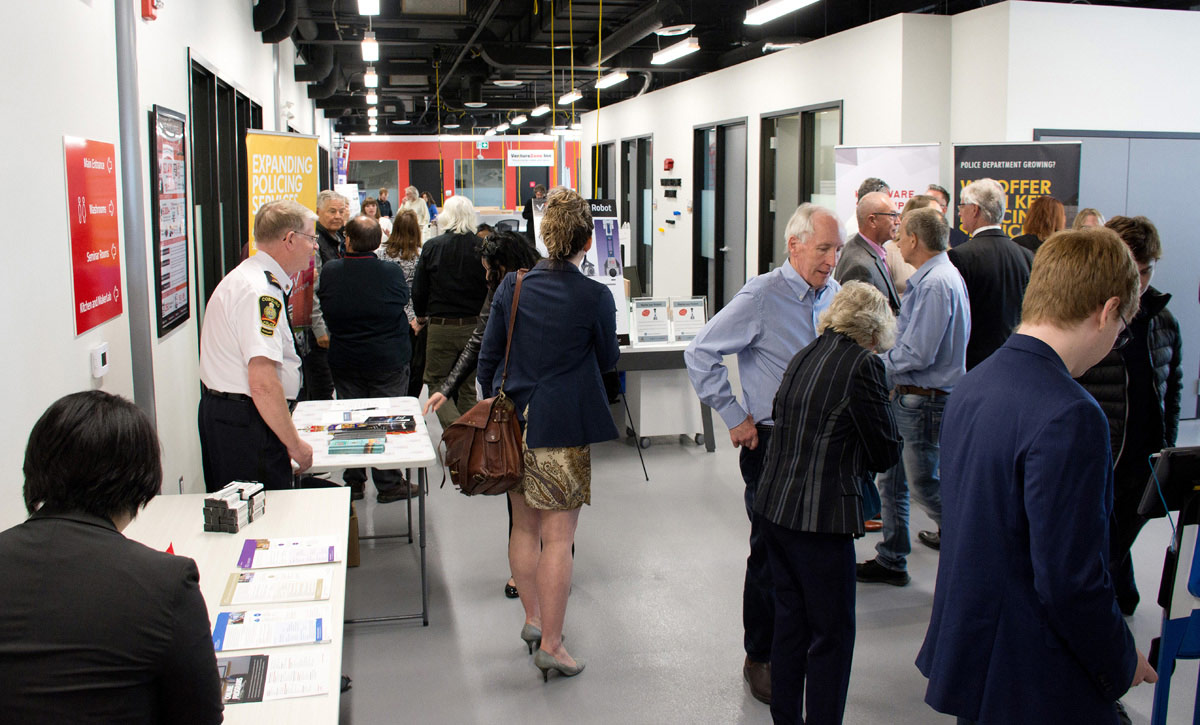 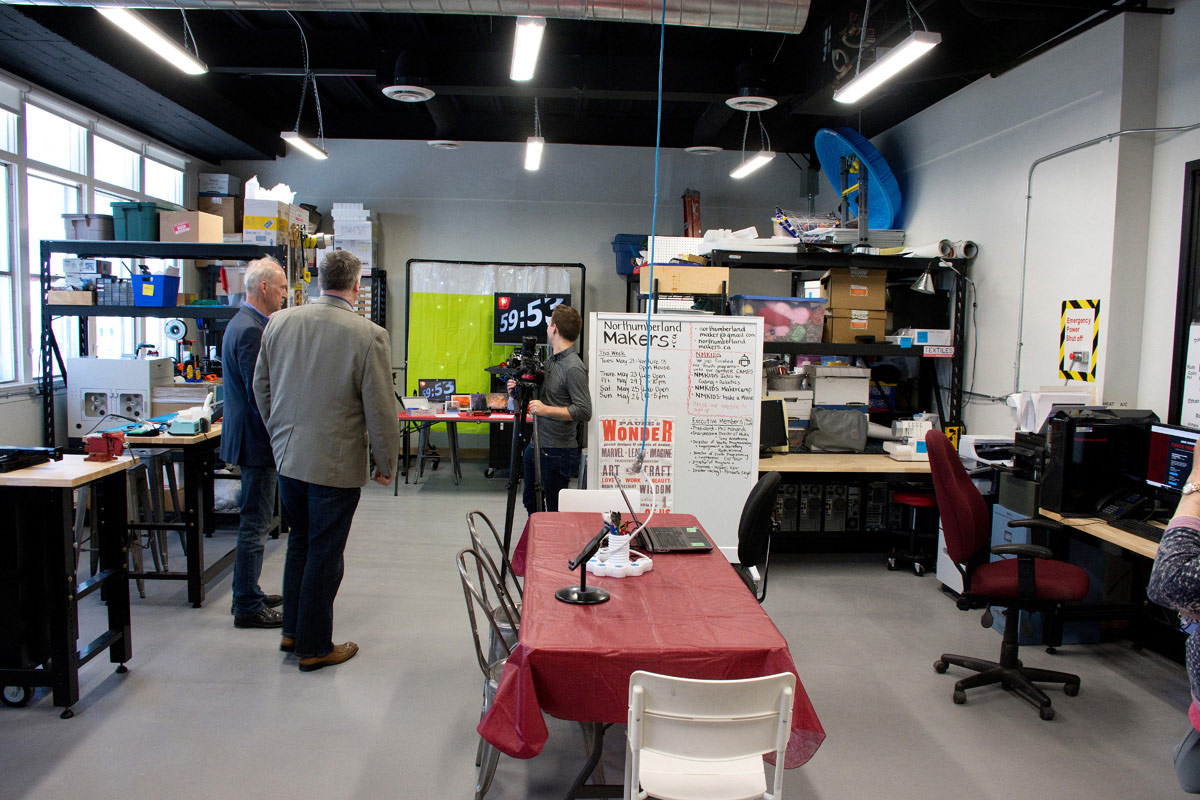 Good of Mr. Piccini turn up for a photo-op, although it seems that the Province had nothing to do with Venture13.
But his Ford Party will please its base by forcing a new regional health unit on us, which would serve residents in Peterborough, Northumberland County, the City of Kawartha Lakes, Haliburton County, Prince Edward County and Hastings County. Way to go with representing our riding in Queen’s Park!
In contrast, Ms Rudd announced that the Feds are providing an additional $4.5 million to Northumberland Community Futures Development Corporation in order to fund local and regional innovation initiatives.

Is Ms Rudd a member of the Trudeau Party in the same way Mr. Piccini is a member of the Ford Party? Or are they members of the Federal Liberal and Provincial Conservative parties?
And… I didn’t see your comment on the Ed’s House thread that “Also present (and speaking) was M.P.P. David Piccini – the Province provided $1.2M in capital and $630K operating funds”
Where was your sweetheart MS Rudd? In an election year no less.

The encouragement and incubation of creativity in all spheres will keep philistinism in check.

Coming from a full career in air navigation engineering and operations at the national level, the idea of Venture 13 was first of all, a super idea and , based on this news, is indeed, a very successful idea. My congratulations to all concerned . Cobourg is a very clean town and Venture 13 will only help keeping it that way in terms of new products going forward by virtue of technology innovations and operationalization.

I’m disappointed to hear that so little was mentioned about the Maker Space at the back of the building, and how successful it has been with evening, weekend and summer “camps” for youth. Catherine and Mike Kerr, as well as Ruth Worona are there tirelessly working to make that lab an engaging and exciting place to be. To be fair, I was unable to make it to this celebration, so perhaps more was mentioned through the speeches but was not highlighted in the blog.