In September 2019, a Safety audit of the harbour resulted in a conflict between the Dragon Boat & Canoe Club (CDBCC)and Marina Management.  A number of recommendations were made but the focus was on the club’s activities.  In an effort to resolve the problems relating specifically to the CDBCC, a working group was established made up of Jeremy Fowlie, Kim Burgeron, and Dean Coates representing the CDBCC and Suzanne Seguin, Emily Chorley and Ian Davey representing the Town.  Ian Davey will be presenting a recommendation to Council at the Committee of the Whole meeting on 27 January that includes an MOU (Memorandum of Understanding) that spells out a number of changes plus the responsibilities of both the Town and the CDBCC.

Some of the problems were caused by high water intruding on the clubs existing space immediately to the south of part of the Yacht club’s holding area.  This is resolved by moving it to the north side although that will narrow the marina parking lot exit roadway.  The club will be responsible for paying for an electrical service to be provided and for construction of a small building; the Town will permit club activity participants to use the Marina washrooms and even shelter from inclement weather in the Marina Building.   The MOU is quite long – especially compared to the document it replaces – but will hopefully clarify responsibilities.  Based on the conflict last Fall, this is definitely needed.

The image/map below explains the changes proposed – click to enlarge 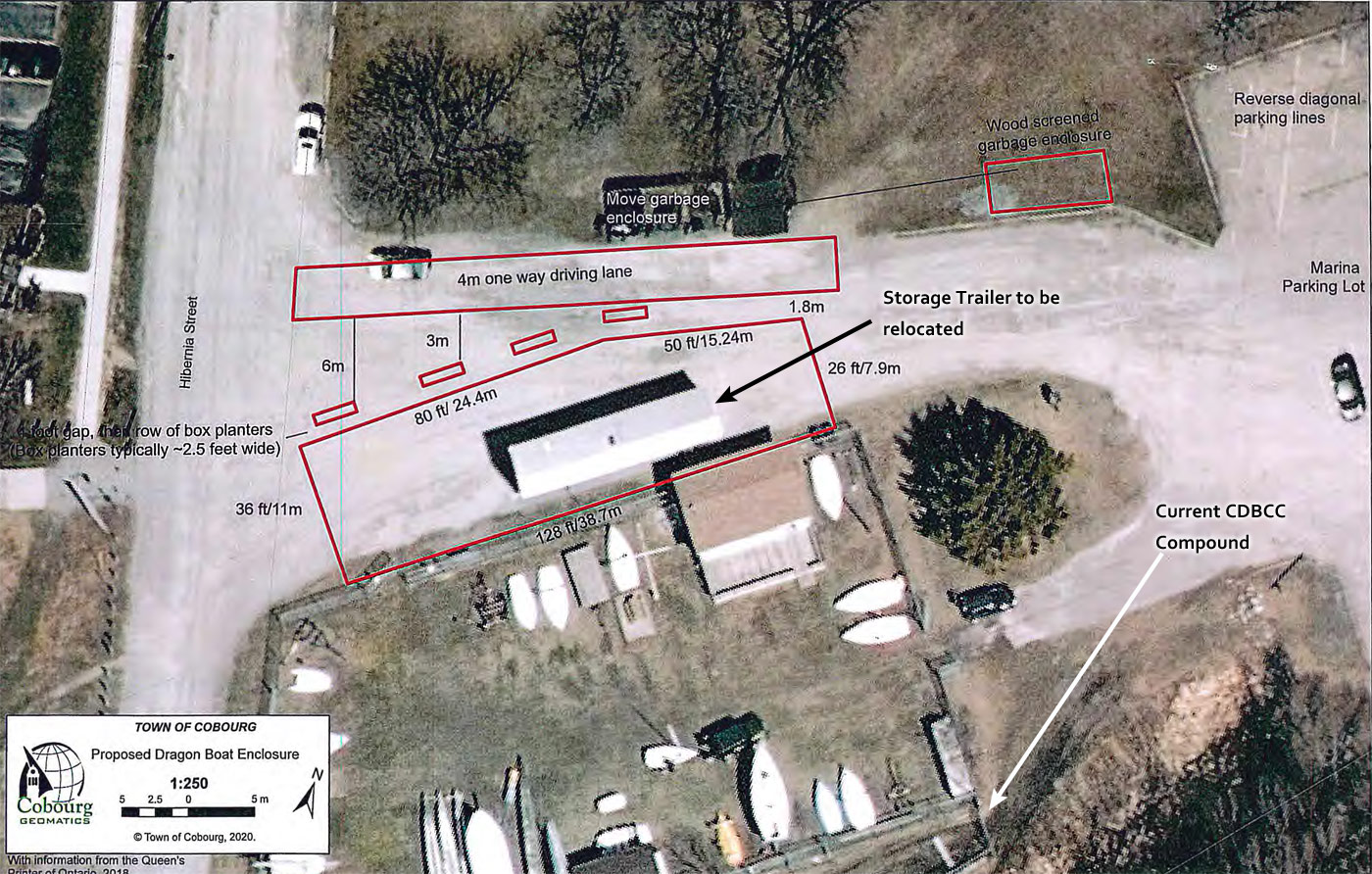 See the Links below for the relevant Documents and an article explaining the problems and why there was such a serious conflict.  According to Jeremy, if all the recommendations were implemented, the club would be out of business.  Some have not yet been addressed (e.g. scheduling and a motorized safety boat) – perhaps there will be some follow up on these.

After a lot of discussion led primarily by Councillor Brian Darling who wanted it changed, Council passed the motion to approve the MOU with a number of minor changes. The most significant was that the rent is not reduced to $2/year but stays at the previous amount – around $2000/year.

What comes to mind is: how is the Town compensated for this usage?
A very limited available parking area is being reduced to house watercraft. Is there a charge for that as there is for boat storage in the Town’s compound? Additionally, a boater pays substantially for a seasonal slip, which includes access to the marina building. Is providing access to the building for perhaps several dozen rowers fairly compensated for by a single slip rental? With all the significant structural repairs the harbour requires all users should pay their fair and proportional share.

Why did you take down the last person comments and the Video that discussed Agenda 21 ?????
It sounds just like the Ontario Places to Grow and the Towns Planning Policies
you Know Censorship and control of the information the public is allowed to Have , Know and Control
of how and where we live

Because “Mark Jones” is not following the rules of the blog. He is banned from any comments, good or bad.
You are free to add a video or comment but not this anonymous troll.

I love Section 3, para. b, where I can now enjoy fishing in the harbour.
Hooray!,

You always could fish in the harbour, as long as you did it “on the water” and not from the shore. The Town has no juristiction “on the water”. This belongs to the province or federal gov’t

No fishing in the harbour. This is posted everywhere in that area.
This from the Town Marina Regulations – ” #12 – No swimming, diving, water skiing or fishing will be permitted within the Marina basin”.

You should check your facts. Verify what you have just stated with the Town office and/or Marina.

jimq;
Have you?
I have read the applicable statutes and am quite secure that my statement is correct. I suggest that you also read Jeremy Fowlies’ excellent delegation regarding the water safety audit, He makes the same point about the Town’s lack of juristiction “on the water”

As regards fishing in the harbour; I suggest that you ask the Town Clerk about any successful prosecutions for fishing from a “boat”.
I doubt that he can provide you with any examples.

Oh yes – obviously you haven’t. BTW – Jeremy makes a hefty buck off his group, and I wonder why they don’t pay any taxes to the town. Just the lease costs???

jimq:
“Pay taxes to the Town”? As you note, they lease the facility from the Town, not own it. Therefore no property taxes.
On another matter, why do you have a problem with Jeremy getting paid for his work?

Get rid of those dam old unsightly tractor trailers including the one by the pool at Victoria Park OUT OF HERE
they take up a lot of parking , Zoning does not permit them in these locations and why should the
residents have to look at them 365 days of the year blocking any expectations of a water view

From my observations, the trailer that is parked by the outdoor pool is the container for the Christmas decorations. The trailer usually arrives in August and is removed in the spring.

The trailer that was in the marina parking lot was the dredge work trailer. It should have been removed when the dredging was done. The lack of concern knowledge and the procrastination of the marina manager is why I chose to leave the employ of the Town in 2017 after nearly 48 years.

Move the whole damn thing down to the Willmott St. industrial area where it belongs and have done with it. Free up the valuable lakeside space for everyone to use.

and just how do you plan on launching a boat on Willmont St.?

Greengrass – Answer: Build a concrete boat launch and equip with a Boat Lift. Even has room for a Lift maintenance shed I understand. Only a minimal investment of approx 800K of Non-tax payer funding.

and just how do you propose to build a boat launch off a 50 foot cliff?

JimT, How much are you and all those that you speak for willing to pay to have this done?

Good! Very glad to see a resolution on this matter. A question, and I may have missed this point in my reading. The CDBCC identifies as a volunteer based, incorporated not for profit corporation … do all or any of its board members have signing authority (page 6) for this sort of agreement and who would be the designated main CDBCC contact person, or committee, with the Town during a lease period covered by the MOU?

Additionally, those corporate officers can receive significant compensation for operating the entity. So while the structure is not-for-profit the officer salary can be very much for profit.

MCGA:
Or not. The Town is a not-for-profit entity. Are you suggesting that the Town should not pay its staff, in particular, the executive staff.

Hardly, a fair wage for a fair days work. That said, in my consulting days I encountered several nonprofit and not-for-profit organizations, including charities, where the officer compensation was disproportionate to the work they did; and always on the high side.

As this thread is about the CDBCC, are you suggesting that the staff or some of the staff are overpaid or perhaps should not be paid at all?