At a council meeting on April 27, a bylaw was introduced to increase enforcement of social distancing required for management of the Covid-19 pandemic in Cobourg.  But Adam Bureau moved that the By-Law be “tabled”.  His motion passed and the possible by-law was killed, at least for the time being.  But at the Committee of the Whole meeting on Monday June 1st, Aaron Burchat moved that this bylaw be “removed from the table” (resurrected!) and be put to a vote.  In a recorded vote, his motion passed 4-3 with Councillors Adam Bureau, Emily Chorley and Deputy Mayor Suzanne Séguin against.  But after extensive discussion, approval (or not) of the by-law was deferred to the June 22nd Committee of the Whole meeting.  So what exactly does the proposed by-Law do?

The by-law proposed by the Town Clerk (file photo at right) would mean that on Public Property (e.g. Parks) or in Public Spaces (e.g. supermarkets) – but not private homes – By-Law or Police Officers could hand-out tickets for failing to maintain a 2 metre social distance. Fines would be $300 for individuals or $600 for property owners. The fine for obstructing an officer would also be $600 – that includes refusing to provide ID to the officer.

Although some measures are covered by Provincial Laws (no more than groups of 5), social distancing on Town property such as Parks and sidewalks is not covered.  That means that in those places there is no way to enforce social distancing – officers can only ask it be maintained.  Town Clerk Brent Larmer said that the bylaw would be a useful tool and was in favour.

Emily Chorley said that the proposed by-law was not proportionate and infringed on civil liberties.  She was also concerned about a potential for racial profiling.  Brent said that officers always try education first and issue tickets only as a last resort.

But Emily as well as Councillors Darling and Bureau plus Deputy Mayor Séguin were in favour of deferring until after the staff report required in connection with the beach closing that’s due on June 22. Adam moved that a vote on the bylaw be deferred until the June 22nd COW meeting.  His motion was carried.

See links below for more detail on the actual proposed By-Law.

To my thinking the practices of political leaders are less consequential than what safeguards they encourage and put into place. For this virus event the guys who follow the science of epidemiology likely have it right. If you look beyond our borders the pandemic is accelerating, more than 100K new cases a day, worldwide. This is not SARS, which burned itself out in a few months. As we return to patterns of travel, what goes around comes around. Until there is an effective vaccine the only proven defense is safe practices…masks and distance.

Trudeau does not Social Distance (today rally) so why does our council look at fines. Why is our beach being closed??? When our Prime Minister does not follow his own guidlines. What a joke being played on the citizens of Canada. Two sets of rules….

Trudeau is a vanity seeking PM. What he does has no bearing on protecting residents from unnecessary COVID spread. Council made the right decision. Trudeau has his head in the sand

Has his head in the sand? There are other, more likely, locations.

Turns out stay home stay safe doesn’t apply to our PM. No social distancing after all his sanctimonious front step lectures.
Hypocrite better describes him.

Oh now – he wouldn’t want to get sand on his blackface would he?

Trudeau has , except for his 11:30 condescending speeches hides for for 3 months won’t sit in parliament but OMG chance for a photo op and to come right out and say we should all participate in protests. While Dr Tam says you can protest if you wear a mask and don’t yell…….
But stay in groups of five, wash your hands and self issolute😳
I miss my family and friends how about you?????
Good on the council for trying to keep us safe we have worked too hard to let it all go to go to waste by a govt that is only interested in being voted back in …. you get a car, you get a car but don’t count on it until you get it.

The man is a joke, but sadly, the jokes is on us.

That was the point of my comment…Trudeau is and always has been a “FOOL”.

I am so sick and tired of staged photo opps….

A good photo opportunity Trumps all else. Get it?😁

If I may quote the above “ Town Clerk Brent Larmer said that the bylaw would be a useful tool and was in favour.”
Since when is the Town Clerk a member of Cobourg Council?

He did not actually say he was in favour but did sign the memo proposing the by-law. So he is obviously in favour but of course had no vote.

Thank you for clarifying.

Do you actually think that Council rather than staff make the decisions?

Do you really want a police state in Cobourg?

Cornbread, or whoever you are, if you want to use extremes to make your argument, I would answer … do you really want the virus circulating freely in Cobourg? There is no verified understanding of this virus except that it is deadly. We still do not have adequate testing or the ability to trace contacts. Asymptomatic people can carry it and transmit it. In Torontos’ Bellwood-Trinity Park many flouted distincing. Flu season this Fall will most likely see a major spike. It could be as long as 4 years before we have control.
By nature I am an optimist but the consequences of catching this virus are so severe, regardless of how statistically, remote, especially with our above average aged population, that I believe that policing, by first informing, then a warning ticket and only then a fine is the right way to go.
You can argue that any law is a personal infringement! Do you believe that requiring everyone to drive on the right side of the street is an infringement of your civil liberties?

Keith – to be clear, it can deadly to a small percentage of the population. The chances that we all will catch the virus are very high however the consequences of catching the virus for most of the population are minimal to none. I’m not saying we don’t need to be cautious in the approach to reopening but we also need to be cautious in what information and fear we are spreading.

…the consequences of catching the virus for most of the population are minimal to none.

Depending on what numbers you believe, the death rate is reported as 0.5-3% for those without prior health issues which seems rather far from “none”. To put it differently, noting that 391,032 (worldwide deaths to date) have died is a statistic but your death is a catastrophe.
Below is from https://ourworldindata.org/mortality-risk-covid 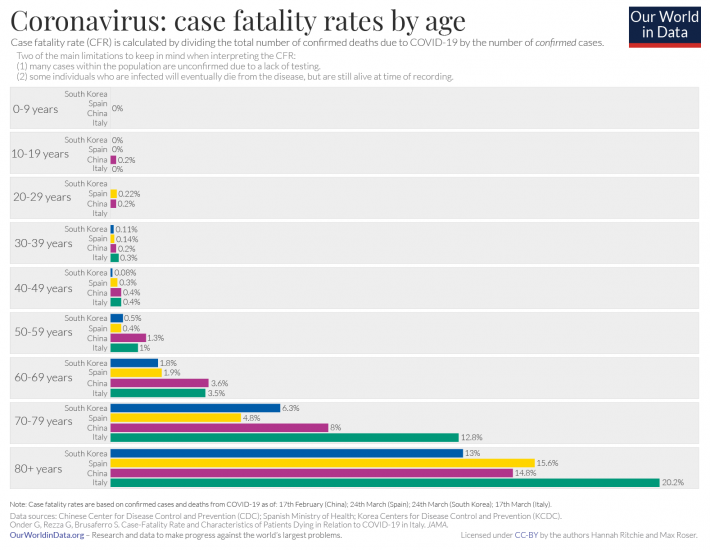 The Province is opening and Cobourg is discussing regressive practices that are months past due…be cautious but discontinue the fear mongering narrative.

Includes “numbers” pertaining to China. That skews everything. How many individuals under the age of 40 have died in Ontario? Thousands? Hundreds? Dozens? One? That demographic is families. Why not let them enjoy the beach, and the old and vulnerable, like me, stay away from it?

FearMongers note: No New COVID-19 Cases From Crowds at Lake of the Ozarks: Health Official.

Yes, there are China numbers in the chart. However, mortality rates are separately provided for South Korea, Spain and Italy. For those countries the mortality rate for the 20-40 ranges from 0.11% to 0.3%.

Hi Kieth…today at 1pm about 100 people mostly school kids were at the North end of Victo ria Park with signs “Black Lives Matter”
None were 6 feet apart. First of all “All Law Abiding Lives Matter” …then ask yourself why did these kids feel that Covid 19 is a non issue.

I go back to a horrible Facebook post at the start of the outbreak. The young servers at a local Tim Horton’s were apparently rejoicing out loud that COVID was the Baby Boomer Remover.

They feel for some reason they are infallible. They are not. I would like to think the majority of our youth are not like the few who wish us seniors dead.

We should not be fighting each other in these unprecedented times bur working together to mitigate the risk of community spread and protect everyone including our precious youth.

Well said Paul so many of the young people are doing their best and it’s amazing how Cobourg has come together for the past 3 months.
I do understand all the frustration people are feeling but….
I don’t understand why the groups of only 5 is not being enforced. The next 2 weeks are going to be very critical after all these protests have and are being encouraged . I hope the last 3 months haven’t been in vain.
May we all do our best to keep ourselves and loved ones safe.

Boring history lesson time: In San Francisco, during the 1918 epidemic the city’s chief medical officer contacted his counterpart in Philadelphia for guidance on how to prepare for the coming wave. The doctor in Philadelphia, in the midst of absolute mayhem, advised: “set your cabinet makers to work building coffins and your ditch diggers digging graves.” Armed with that advice the San Francisco doctor persuaded the city fathers to require, by law, that every citizen wear a mask whenever out in public. That lasted two months and in that time flu infections in San Francisco went to zero. After two months there was a near revolt by the city folk and the Council revoked the law. Infections spiked. You all get to decide where prudence ends and unjust limitations of individual rights begins. Thing is, as uncomfortable as the masks are, and my wife hand I have been wearing them whenever out of the house since our return to Canada on March 22nd, they seem like a cheap insurance policy. After all, sick is not much fun and dead is kinda permanent.

Yes – now is definitely the time to implement and take it to the streets. There isn’t any sensitivity to police, policing, profiling, racism, etc.. There isn’t any feeling of over an militarized police force, lack of civil liberties (Cobourg Covid version of stop and frisk) plus everyone is flush with CERB/CESB/CEWS money so what’s $300-$600… Is anyone on Council watching the news? For most things, there is a time…this isn’t the time. Burchat give your head a shake.

Rob, you’re usually one of the level headed guys around here, but you missed the mark on this one.
And… sarcasm doesn’t translate well on this blog. We’ve all been burned on that.