On July 23 2018, Leona Woods made a presentation to Cobourg Council about a proposed statue of Fern Blodgett Sunde.  Her project has been successful and on Monday there was a groundbreaking ceremony.  Fern Blodgett was the first Canadian female wireless radio operator and the first to serve at sea. She served on the Norwegian merchant ship the Mosdale because the Canadian and British navies did not hire women radio operators. Fern made 78 successful crossings of the Atlantic before the war ended. Although she did not live all her life in Cobourg, she spent 20 formative years here – from infancy onwards. For years, she watched the ships from the shore of Lake Ontario at Cobourg, dreaming of becoming a sailor, even though she knew that only boys could crew ships at sea.

As well as serving during a war and at sea, I have to add some notes on her skills. In those days, a radio operator had to be proficient in Morse code at 20 words per minute. Not everyone is able to master that skill. Plus she had to be able to maintain the radio gear – that means she had to be technically competent and make repairs at sea. Fern Blodgett graduated June 13, 1941 and joined the Mosdale shortly after.

Then in 1942, after the Mosdale’s sister ship was sunk off the coast of Ireland and her chances of surviving the war appeared to be slim, Fern married the captain of the Mosdale, Gerner Sunde – hence the full name Fern Blodgett Sunde. In July 1943, Fern was awarded the Norwegian War Medal by the King of Norway, the first Canadian and first female to be so honoured, recognized for her courage and contribution to the allied war effort. The Mosdale survived the war, and Fern lived to be 73.

The statue will be located in the garden at the East End of Victoria Park, clearly visible from both the beach and visitors to that section of the Park.

Original costs estimates were as high as $160,000 but organizers were hopeful for a $50,000 grant from the Department of Canadian Heritage. This did not happen but an application to the Department of Veterans’ Affairs for $25,000 was successful so the sculptor (Tyler Fauvelle) modified the design to reduce the cost to bring the total to approx. $90,000. This covers everything that needs to be paid for (sculpture, plaques, etc).  Fundraising has been successful – bringing in a total of $85,000 so far.

Although the Town was asked for (and is providing) an in-kind donation, in the end they simply said that any costs would be part of the regular Parks budget.  The base will be provided by Delren, a local contractor, and Delren President Matt James was at the groundbreaking staking out the location – see video below.

Present at the ceremony were the Town Parks Manager Jason Johns (who helped identify the location and made it available), the organizing committee led by Leona Woods and Peter Delanty (photo above), several of the donors, one local Blodgett relative, members of the public but no Councillors.

One of the supporters of the project is the Sifton-Cook Museum (represented by Stanley Isherwood). They host a web page that accepts donations and provides more information – go here.

Fern’s story is remarkable – I highly recommend you download at least one of the links below for details.

The unveiling of the statue itself will be October 17, 2020 and will be live streamed for the benefit of those who cannot attend because of limits to large gatherings.  This would include some who made donations as well as Fern’s daughters and grandchildren in Norway.  The date has been chosen because it’s the 75th anniversary of the end of WWII.

The major donors for this project to date include the Department of Veterans Affairs $25,000

Of what significance is the fragile site for the location of Fern Blodgett Sunde’s Statue? I was of the (mistaken) impression that the Statue was to be located at the Sifton-Cook Heritage Centre/Cobourg Museum.

Thanks for the discussion about the proposed statue. Indeed the original maquette has evolved to be something quite different now and the scupture is going to be impressive. The sculptor, Tyler Fauvelle, has created an impressive body of work. I am confident that this sculpture will be significant and inspiring. Please see some of Tyler’s work at http://tylerfauvelle.ca/gallery/public-art/

Why is only one person wearing a mask? The group photo with everyone standing nice & close together actually looks very strange because of that. 👀

All the good intentions notwithstanding, I find the model of the
proposed statue to be unattractive, unflattering, verging on grotesque.
— 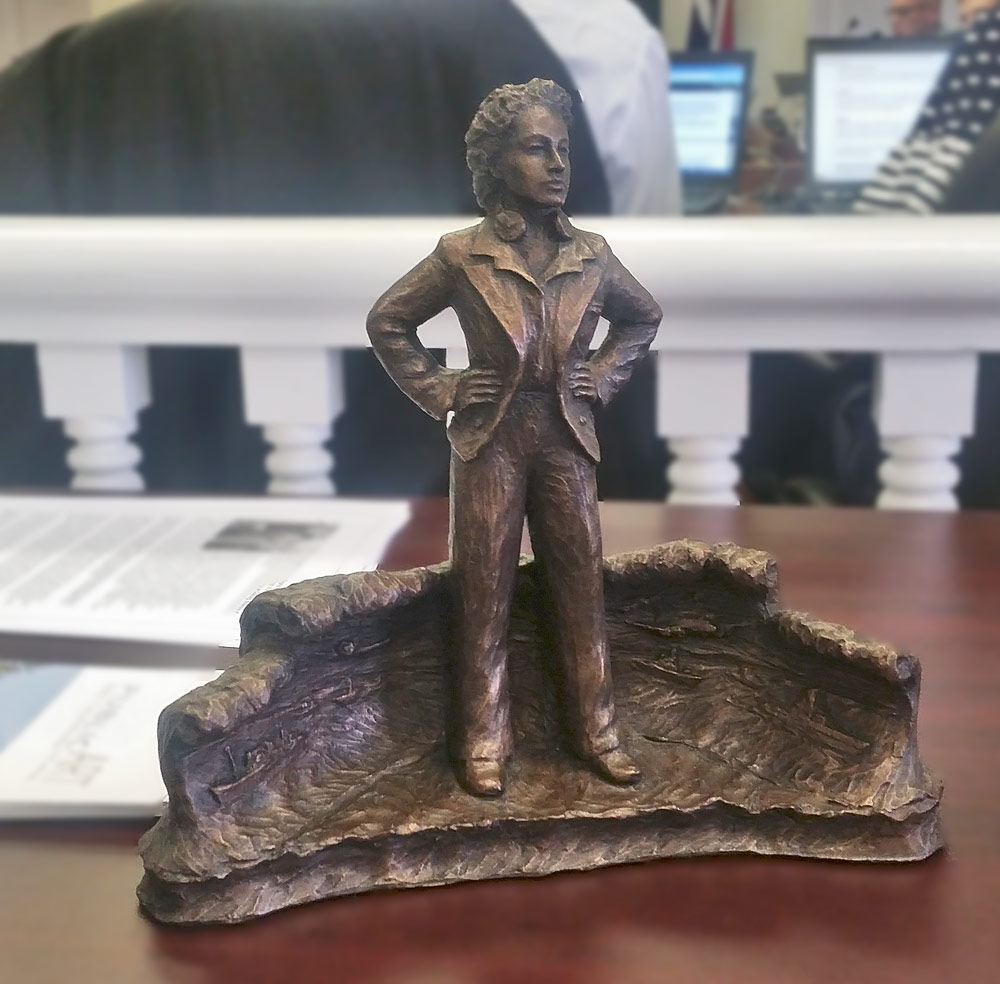 —
Just my opinion, for what it’s worth.

IMO, sometimes the small model is an early concept and it is hard to get the detail. I hope the full size version has more energy and flow to it especially because I think that is supposed to be a wave behind her. Personally, I would have liked to see an authentic copy of ‘Fearless Girl’ and then a plaque beside it telling Fern’s story. Fern was a young woman when she lived in Cobourg, a young woman with dreams and ambition. And no doubt some degree of fearlessness, too. With all the children who spend time on the beach, an important monument/statue in which people of all ages can see themselves in or to which they can relate would have been a lovely gesture. I suppose I tend to prefer public art with a message rather than trying to replicate the likeness of an actual person.

The head on the statue is disproportionate to the body, but that may just be the model. She is emulating the posture of Fearless Girl, but an “authentic copy” of FG would be to franchise her. The power of Fearless Girl resides in its location and what she is facing. That can’t be replicated here. But your point is well taken that it needs energy. Why could she not be sitting while wearing headphones operating a wireless radio. As it is, it appears to be a combination of Fearless Girl standing on a shell like Aphrodite rising out of the sea.

Perhaps the unattractive, unflattering, verging on grotesque and generally unappealing statue is a result of the creator’s lack of talent? Or was the statue designed by committee?

Nice to see something like this,especially after all the news of Covid-19 dominating the headlines.

While I totally agree with honouring this person, installing a statue in this day and age isn’t the wisest thing.
Someone will find something questionable in her lineage and an unbeknownst group will cry foul and want the statue removed.
Sorry folks, but these are the times we live in

I hope you’re only kidding about that 2nd sentence. If you even cared to read her life story, perhaps you wouldn’t write these negative thoughts on such a positive and influential lady.
Comparing Fern in any way to the figures that have such a tainted history, is such a disservice to someone who pioneered a path through the Navy, so that future women can and now do see this as a rewarding and satisfying profession. These are not “the times we live in”. The times we live are about trying right so many wrongs to so many minorities that have suffered in the past.
Fern in no way represents any of that!

Nope, 100% serious.
Reread my second sentence and then google the word “lineage”

If you even cared to read her life story, perhaps you wouldn’t write these negative thoughts on such a positive and influential lady.

Only a few years ago Canadians felt the same about Sir John Alexander Macdonald.

Pardon Me! what people are wrongfully doing is trying to IGNORE HISTORY? would you have the Jew’s forget Auschwitz? YOU LEARN FROM HISTORY (NOT IGNORE IT)
P/S the next thing history will not be taught in schools.

Quite the physical distancing demonstration video.

Thank you for helping get Fern’s story out to the public, John. A minor correction…. a grant request for $50,000 was made to Commemorate Canada, Department of Canadian Heritage but monies were unavailable. The statue was modified to make the fundraising more possible without this significant amount. A request was submitted to the Department of Veterans Affairs for up to $25,000 to support the Fern Blodgett Sunde and Battle of the Atlantic statue and we are pleased to announce that the Department of Veterans Affairs awarded us the $25,000 to recognize Fern and all the veterans who fought in the Battle of the Atlantic, including those in the Merchant Navy. Inside the wave which will be part of the sculpture, etches from the Battle will remind us of the courage, and sacrifice of these individuals. Once again, Cobourg is “a town that remembers.”

Thanks Leona. I have modified the text to reflect your correction.

I hadn’t heard of Fern Blodgett Sunde prior to this initiative and I’m sure I’m not alone. Kudos to those who championed the cause – I’m looking forward to the unveiling in the fall.

Thank you “Rob” for your supportive comments. As a member of the Founding Committee for this Statue and having much personal knowledge of exactly Fern’s role in WW2 , I can tell you that just being on active duties in the “radio room” on a ship in the Battle of the Atlantic was extremely dangerous, hence the reason that women were not even permitted to take the 8 month “Wireless Operating and Electronics Course” in those days. She paved the way! And we owe a great deal of appreciation to those who initiated this project, Leona, Peter, and Stanley. There may be others early on but Leona is a strong leader and got us here today.