The Saturday of the first weekend in August is usually Cobourg’s busiest day of the year – especially if it’s hot.  Well this year, the weather was hot but the main beach was closed and there was no Sandcastle Festival.  There is usually also a Sidewalk sale on the same weekend but this year there was just a closed main street with no entertainment and much smaller crowds.  See the Links below to see what the Festival was like in 2019 and 2018.  The water level was not unusually high like it was in 2017 and 2019 but this just made the beach more inviting albeit empty. I visited the West Beach, the West Harbour, the Marina and the Main Beach and recorded this in a video and a collection of photos.

See the video below and below that some photos. 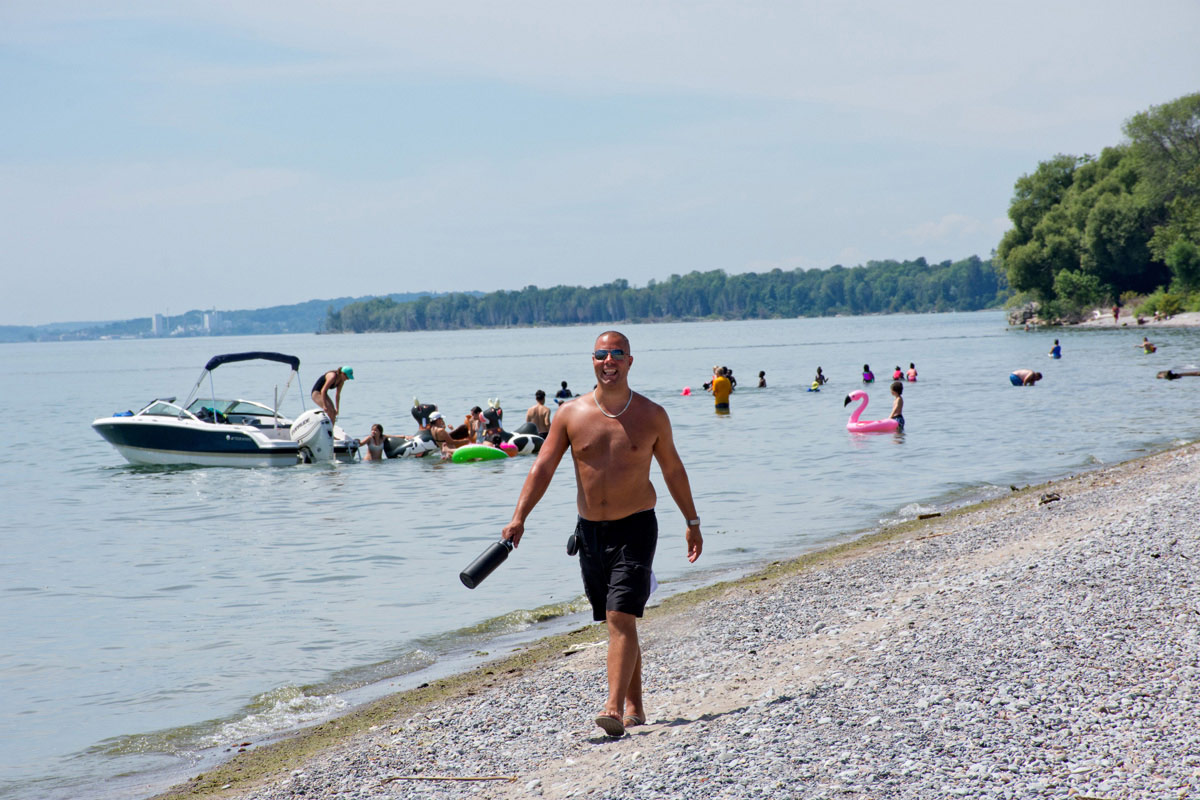 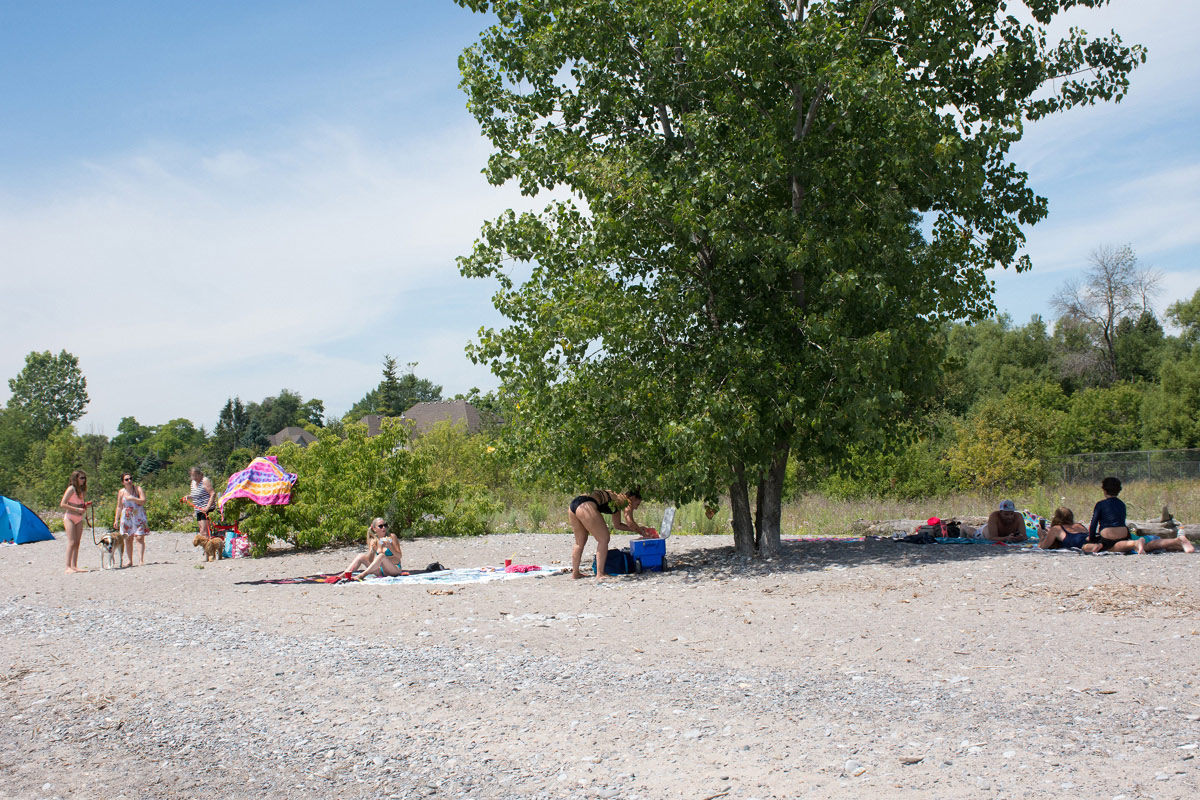 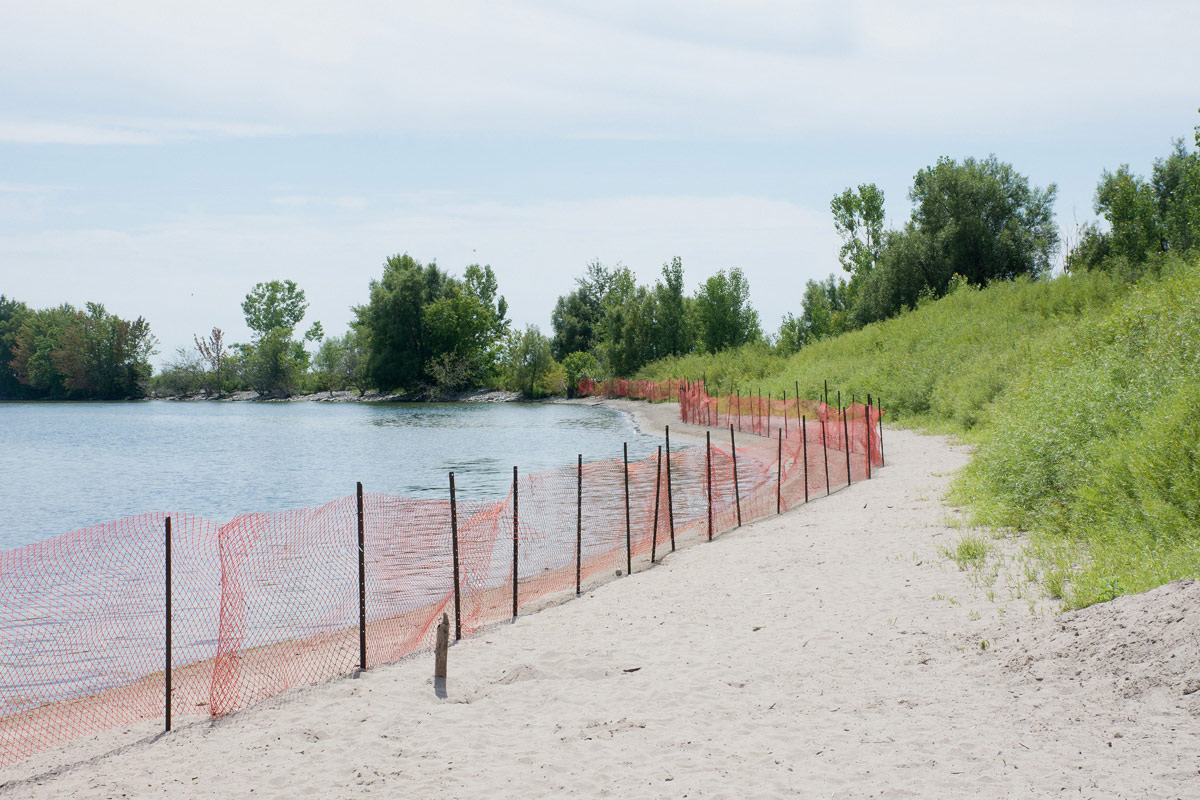 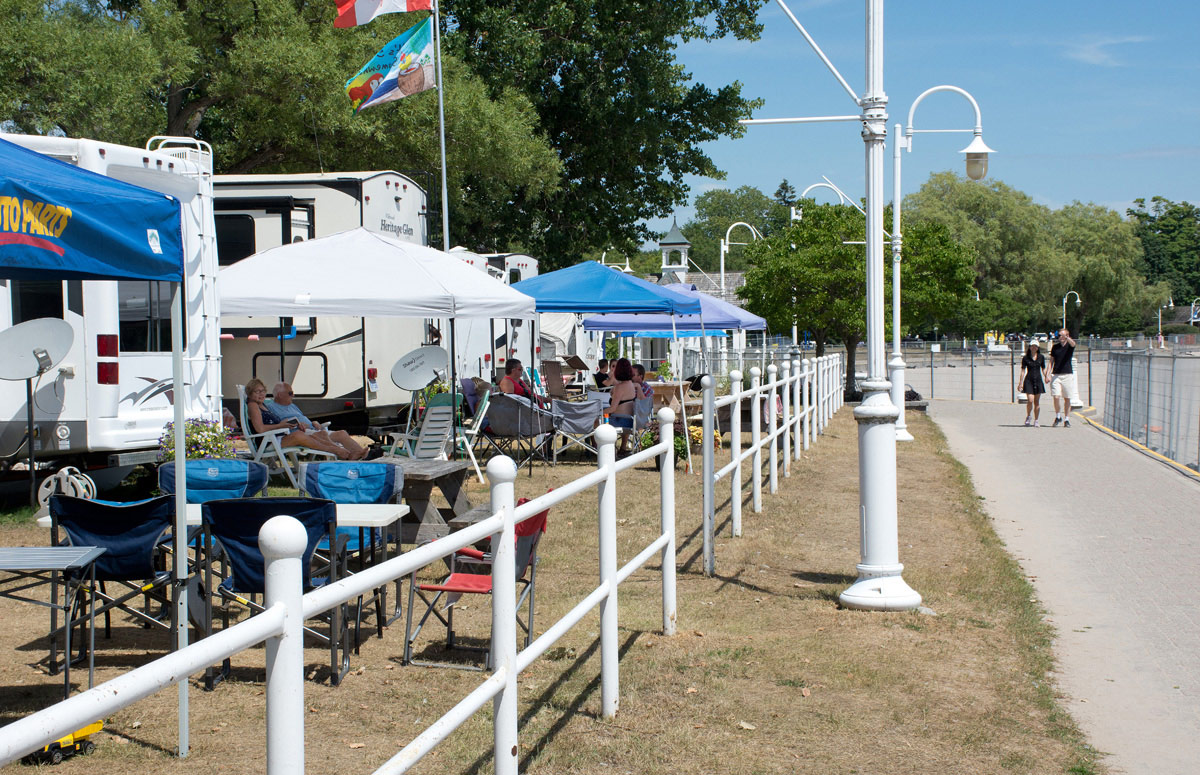 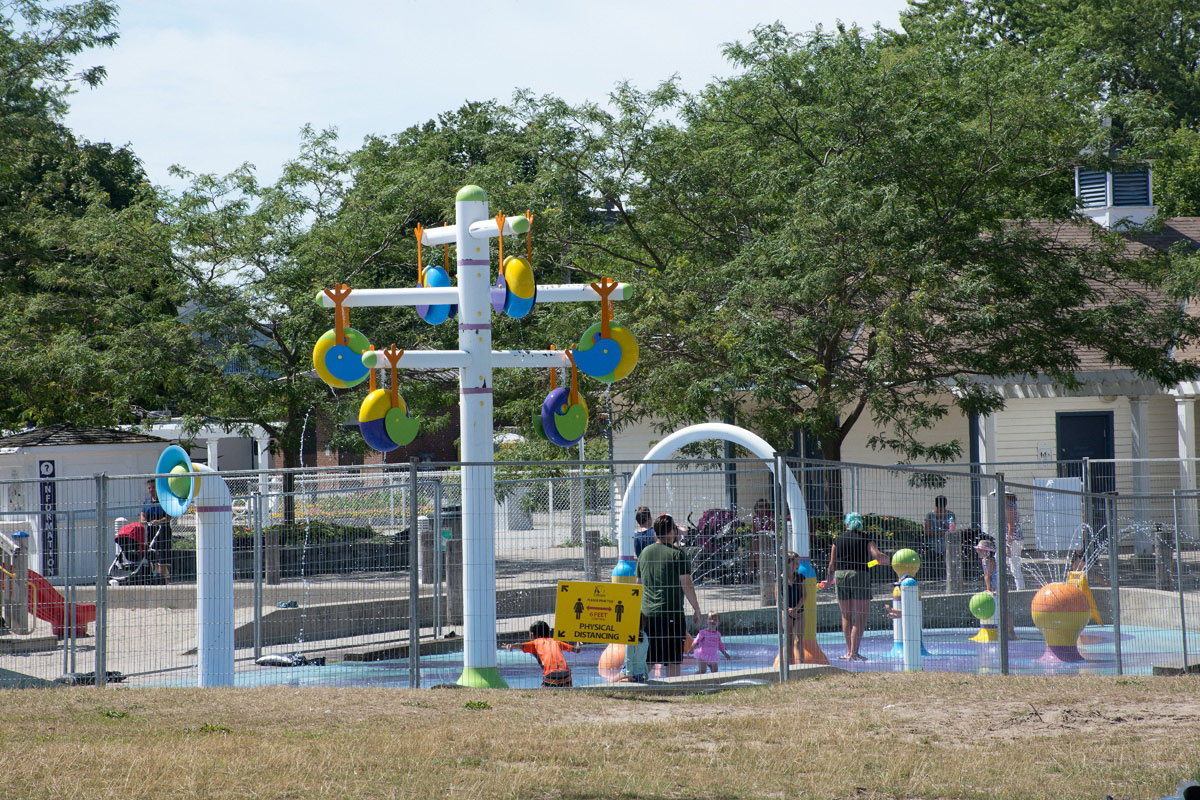 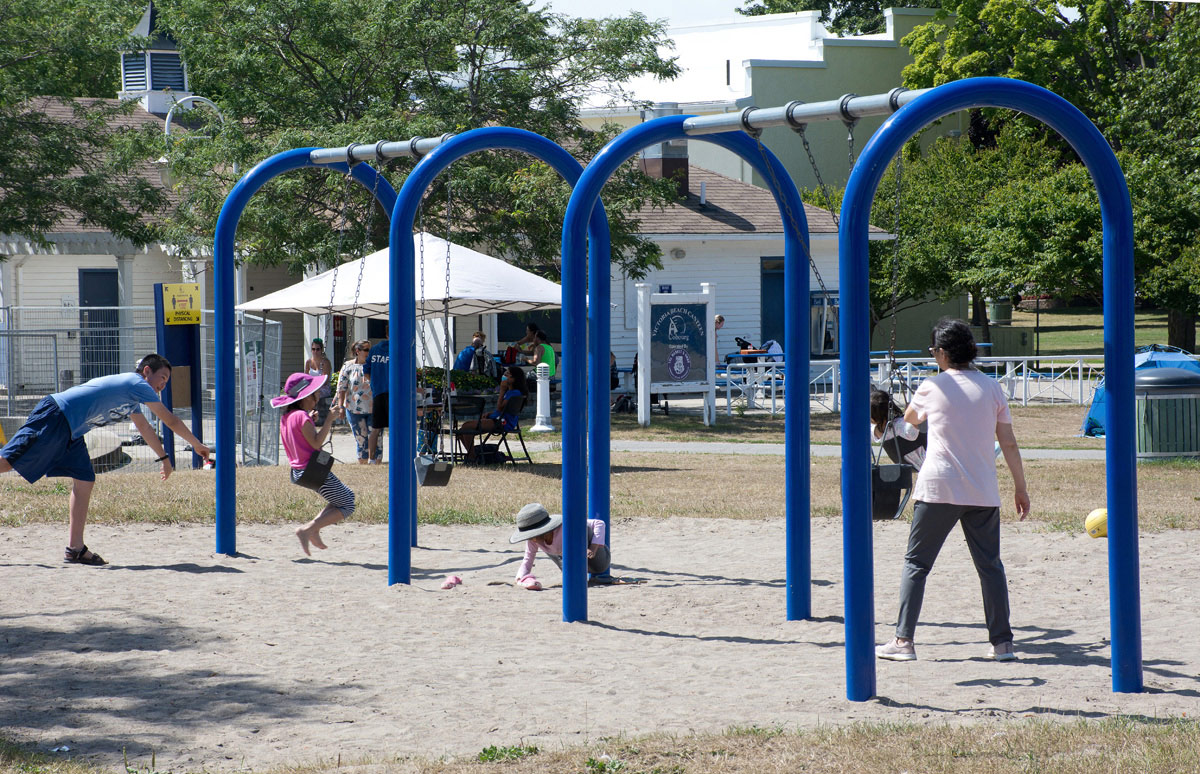 Playgrounds and swings are open 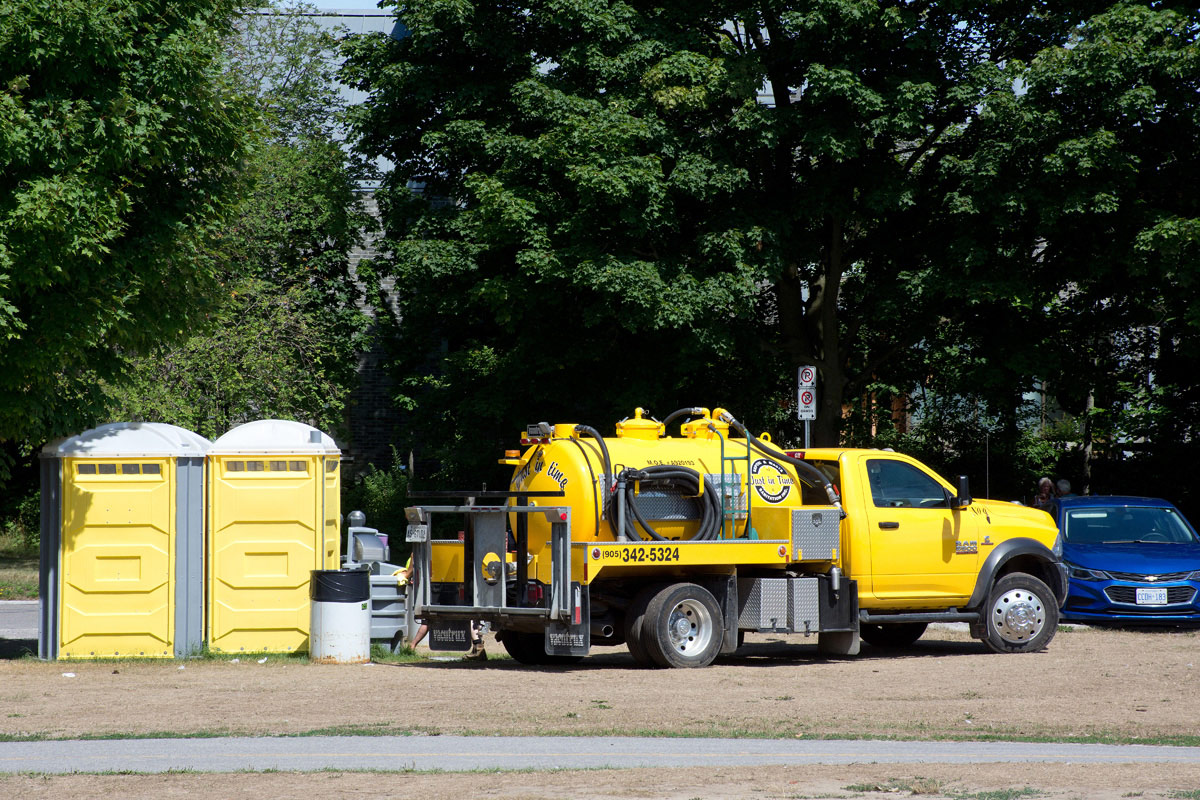 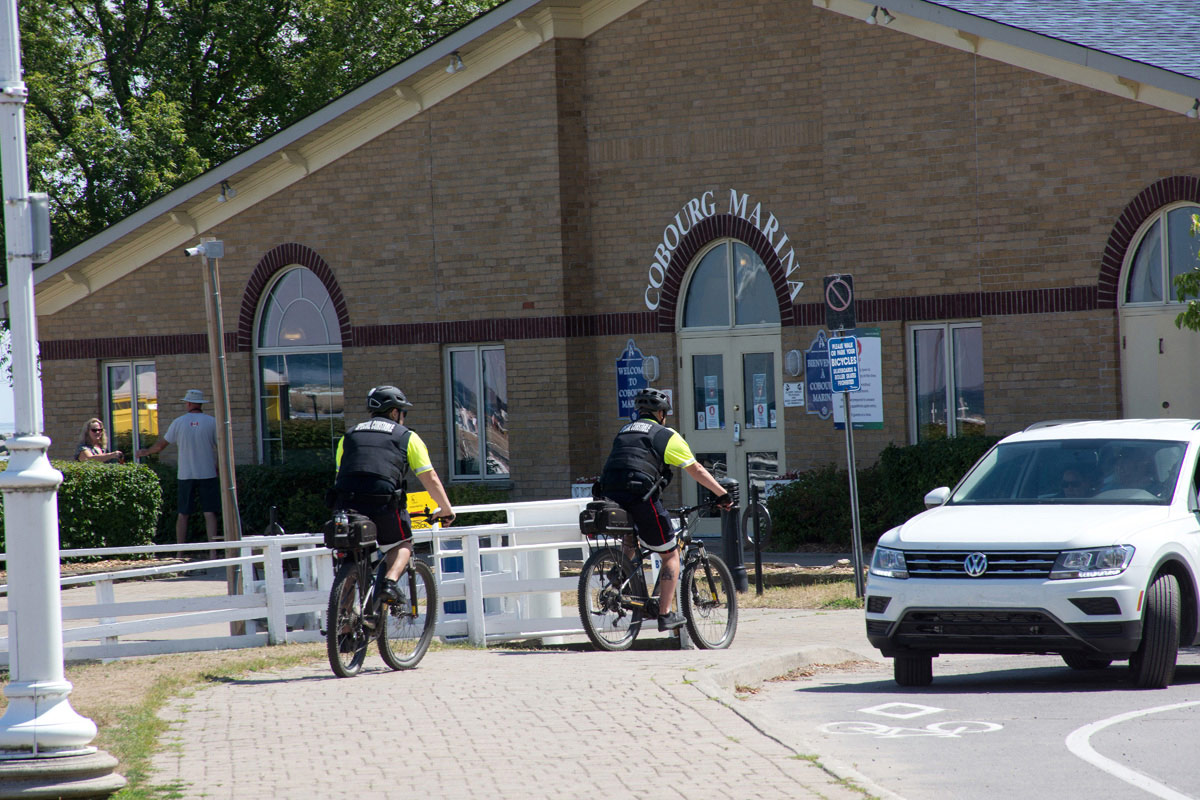 I used the “Honk” parking app, (in parking lot at end of Division street South), so there was no ticket to be displayed on my window/dash. Maybe others did too?

What is the source(s) of the e-coli contamination and can something be done about it? Can not be the birds or other wildlife… so many humans in the area this year. The birds seemed to have moved to the main east beach and other places. And, boaters not allowed to dump sewage into fresh water within a certain distance from shore.

Yuck! That has to be stopped inside the harbour if it still allowed! Thank your for the info link.

It’s simply not allowed in any Canadian waters and is monitored very closely by OPP and the Coast Guard. Any boat with the ability to dump black water overboard must have they system closed and securely locked so it cannot be used by anyone. If your boat is found without the locked security system in place and fastened, the fines are extremely high.

It is illegal in Canada. The article quoted above is from a US source. Legal in the states. Our boats are inspected and if you are found to have a “Y” valve you will get fined.

Boaters should never be allowed to dump sewage into our waterways regardless of distance from shore. They should be required to use pumping stations.

Why not? If the sewage is properly treated prior to discharge (as per the linked article), how is this different from what many municipalities along the lakefront do?

Why not? – because it’s simply the wrong thing to do and completely illegal – coast to coast to coast. All the boats in the harbour (not the small runabouts) are inspected by the Canadian Power Squadron each year for safety equipment and locked blackwater systems. You are then issued a certificate of compliance which you mount on the boat side windscreen to display to the Coast Guard or OPP if ever stopped. Port-a-potties are also illegal on a boat.

jimg, do you happen to know if composting toilets are legal/illegal?

Composting toilets are legal on vessels, but no discharge allowed until at a proper pumping station – “Transport Canada has ruled that porta-potties and composting toilets can qualify as “temporary storage devices” as long as the vessel is less than 15 gross tons and carries fewer than 15 people. And they may not be emptied overboard. But it is no longer permitted to use portable buckets that can be emptied on shore’.

Your photos don’t show how the water at West Beach ( not the west harbour) has been green and putrid at the most easterly end for the past several days.There are also warning signs posted. It’s sad that it’s the only option for swimming for local kids and families without cars. With the province in stage 3, many municipalities have opened their beaches midweek or evenings to allow people to access the beaches. They’re not experiencing crowding. It’s sad that the only people able to enjoy Victoria Beach are out of towners who scored a room at The Breakers. I was at Sharbot Lake beach yesterday and people were socially distancing and using the beach responsibly.

“It’s sad that the only people able to enjoy Victoria Beach are out of towners who scored a room at The Breakers.”
How do out-of-towners get to use Victoria Beach? I thought that Breakers had a private beach. Unless Breakers is fully booked, “scoring a room” just requires making a reservation.

Rooms are booked a year or more in advance. People can put their names on the waiting list but I know several people who have been on the list but never been called.

That’s life. Same goes with many popular resorts in our country.

You’re right – the Breakers has a private beach, and not the Victoria Beach which is closed.

You are 100% technically correct. However, it is one long stretch of sand of which the “private” stretch and swimming is open to people staying at the Breakers while access from the east (via the stairs) and from the west (from the sand) is closed to everyone else. I don’t see how it would be too expensive or dangerous to open the beach in the evenings. It’s certainly safer than swimming at West Beach.

Beach Lover:
The Harbour Beach is closed due to contamination. There is nothing wrong with the West Beach

There are several signs warning about the dangerous undertow, no lifeguards and that the water quality is not tested at West Beach. Over the past few weeks, the east end of West Beach ( not the harbour) has had a film of green-grey scum extending for 25 feet along the shoreline. In addition to being a Blue Flag Beach, Victoria Beach is a much safer option for children and teens.

There is little to no economic benefit. The upkeep and expense to operate our beach far outweights any economic benefits. There should be time to get a handle on this by next summer. Lets not wait. Fee for use. Lots of time to iron out the details. Our downtown struggles because we think beach tourism has always been the answer when its not.

Something definitely needs to be done if the best Cobourg can come up with is to shut down the beach completely for everyone — including the people who live here – whenever there are crowds.

A global pandemic is good enough reason in my books. Life goes on without a beach for a year.

I agree, outdoor areas like beaches are low risk. Can a better plan such as limiting capacity with timed passes etc not be implemented. For kids this is their main source of summer enjoyment.

That’s another good thing about the west beach, looks like you can bring your dog there. (1 minute mark)

The bylaw officers don’t seem to leave the boardwalk very often during their patrols so there are often dogs both off-leash and on-leash on West Beach.

I was being sarcastic here by the way. Might not have come out that way. I definitely do not thinks dogs should be allowed on the beach.

Meanwhile………
-Canadians celebrate the error in St Patricks Day warnings of our Health Minister’s that 40% of our population would have Covid19 by August…
-the government stimulus packages have been matched almost dollar-for-dollar by gains in the S&P 500 since March…(up 48%!)
-our GDP working from home in our pajamas is back to 90% of where it was when we used to commute, struggle and attend offices in person…
-the kids are back to school in September..(even if the teachers aren’t..)
-my employer doesn’t want to see me until 2021..
-the Leafs are still in the hunt for Lord Stanleys’ Mug…
-another box of beer and groceries will be arriving by Fedex at my front door today and all i have to do is wave my phone…
and,
nobody’s paid rent in 5 months….our National debt closes in on a trillion $…and a third of our workforce is unemployed…3 Provinces are insolvent….and our most popular political Party has no leader…

Dunkirk, you neglected to cheer the critical reduction in CO2 emissions. According to some reputable sources layoffs, work-from-home and the virtual elimination of tourism has reduced CO2 emissions by 5%. What can we eliminate to get the additional 45% reduction that Justin has promised?

Maybe we don’t have to??…
https://environmentalprogress.org/big-news/2020/6/29/on-behalf-of-environmentalists-i-apologize-for-the-climate-scare

Dunkirk, why did you have to include the last part? I was starting to feel good about the way things are working out. People need to feel productive or useful so a third of our work force is in trouble. According to my brother-in-law governments use ‘magic’ to make money. Maybe the government can keep up the ‘magic’. But what does my brother-in-law really know? The portfolio he was responsible for was only in the billions of dollars not a trillion. Like most people, I do not fully understand monetary policy but debt means interest needs to be paid. The ‘person’ receiving the interest has some control over the person paying. My mortgage payments to the bank for example. Maybe the government can get a bailout from Germany like some European countries have. But then Germany would have some control over our lives. Is there any evidence that Germans would want to take control of the world? You mentioned changes like working from home for some. All those people not paying rent will eventually be evicted and will not have a home to work from. That seems like a huge problem to me. I hope some people have a solution.… Read more »

The closed west beach due to high e-coli readings also limited launching of kayaks and paddleboards.

Who would let their kid kayak, canoe or paddleboard in the e-coli infested west basin?

They probably consider it a safer alternative to West Beach there’s a strong undertow and steep drop off as well as questionable water quality.

Here’s another option, just don’t do any activities in the polluted west basin and risk your or your children’s health. Life goes on without paddleboarding and kayaking just like it does without baseball, hockey and soccer. Tough it out, use your imagination for other forms of entertainment, suck it up and we’ll try again next year.

1. The Town of Cobourg’s Public Works Division would like to inform citizens that both railway crossings at Burnham Street and D’Arcy Street will be closed for track maintenance from August 11-16, 2020.
2. Mayor John Henderson announced that 72 applications were received for the position of CAO.  This has been narrowed to a list of 3 who will be interviewed by the entire council on August 6.  The new CAO should start in September, 2020.  The Town’s org chart (unofficial) can be seen here.